In the 1977 James Bond film The Spy Who Loved Me, the star of the movie isn’t a debinaire Roger Moore, but a 1977 Lotus Esprit that transforms into a submarine.  The movie used an actual Esprit for some of the underwater scenes and that car was subsequently lost to the public eye and only reappear when someone purchased an abandoned storage unit in 1989.  The car eventually sold for almost a million dollars to none other than Tesla Inc’s Elon Musk who plans on using it for world domination.  However, imagine an alternative universe in which agent 007 is from Alabama and introduces himself as Bondo, James Bondo….this C3 Corvette Boat offered for $2,700 in Nora Springs, IA would be his ride.   Tip from Zach. 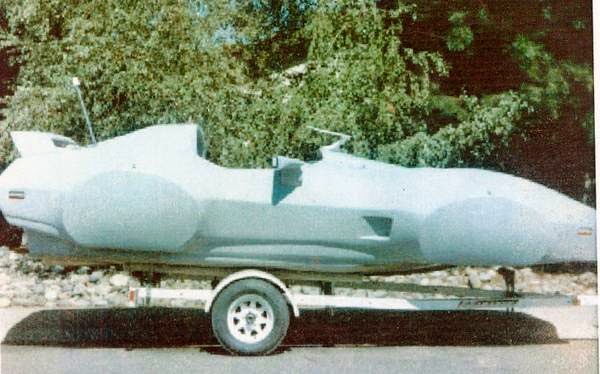 It is really difficult to properly describe what I am looking at so, let’s just leave it to the seller who writes:

19 ft. x 8 ft. fiberglass project boat that never got finished. Made it
to match my 1974 Corvette car in 1990 in CA. Lost my job and now too
old to finish the project. I’m hoping someone can complete this idea
since it is a SUPER idea and turns heads of ALL ages. It’s a prototype
that I wanted to test in the water to make production copies of it. I
spent over $9200 on materials and supplies. Marine hardware and lights
come with it plus trailer. Please complete this design!

See a stranger piece of fiberglass in your local craigslist?  Send us a link.  tips@dailyturismo.com