Below is the story of a girl, a Golf yellow BMW 2002, and how they ended up together. Words by CFlo’s wife Michele:

About three years into dating my husband I decided that I really wanted to have a project car. I had spent time “helping” my mom and grandfather work on cars as I was growing up and then I had seen how much enjoyment my husband got from working on cars. I thought – hmmm I should try that. I started telling my husband about the cars that some of high school kids I knew had and about my first car. From there I developed the list of “Cars I Wish I had in High School.”

My husband starting poking around and one day, he say a great deal on one of the cars I had on my list – a Volvo 1800S. We found a running one that needed some cosmetic work and we thought – GREAT, here is the car for me! You have all seen and read about this car – “Duckling” featured and sold right here on Daily Turismo.

I started working on Duckling and having a great time working out in the garage alongside my husband. It was a lot of work and very time consuming, but I could see the little steps of progress so it was easy to keep on going. Everything was going well and then I went and had a baby which really cut in to the time that I had for working on Duckling.

So CFlo and I started talking about what other cars were out there that I would like. My requirements were the following: boxy, lowered, didn’t need much work if any at all, running engine, and fun. Based on this and we narrowed it down to three (all on my list of cars I wanted or had in high school) – Toyota Corolla, Datsun 510 or BMW 2002.

After selling Duckling we stumbled across several 2002s on Craigslist. Typically they were sold by the time we got around to looking at them. Then one day – one popped up and it didn’t sell as quickly as the others and I actually got to go see it and drive it. We were both hooked after the test drive and brought the car home a couple days later. It’s a 1973 base model in the original rare Golf yellow color.

I have to say that my 2002 is my favorite car I have owned and there has been quite a few of them. Let’s see, my first – 1977 Toyota Corolla followed by a 1984 Bronco II. After the Bronco II debacle I decided that a dependable car was more up my alley and took over my mom’s 1978 Honda Accord and then moved on to a 1999 Honda Civic. The 1998 Jeep Wrangler was next, then followed by a 2005 Civic, then a 2010 Jetta Sportwagen TDI/6-spd, the Volvo 1800S, and now the 2002. When I look at the list of cars I have had, it is kind of obvious why I like the 2002 so much. I think I might have embarrassed my husband by listing these out here…moving on…

Why do I like the 2002 so much? Well, there are several reasons. First of all, as soon as you grab on to the steering wheel you can tell you are going to like this car – everything just feels right. I just can’t stop smiling when I’m driving it and on top of that, it is a super cool looking car even though it is highlighter yellow, the way you sit in the car feels nice (even though the seats could use a little padding), it is so easy to drive, the car sounds mean and fast when you hit the accelerator, you don’t need to brake to take a corner because the car just sticks to the road, and most of all, there are only a few things that need to be fixed!

In retrospect, I think that the only reason I wanted a project car was to spend time in the garage with my husband while he was out working on his cars. Since moving on from the 1800S to the 2002, I have determined that I am one of those people who would rather drive a car than fix up a car. 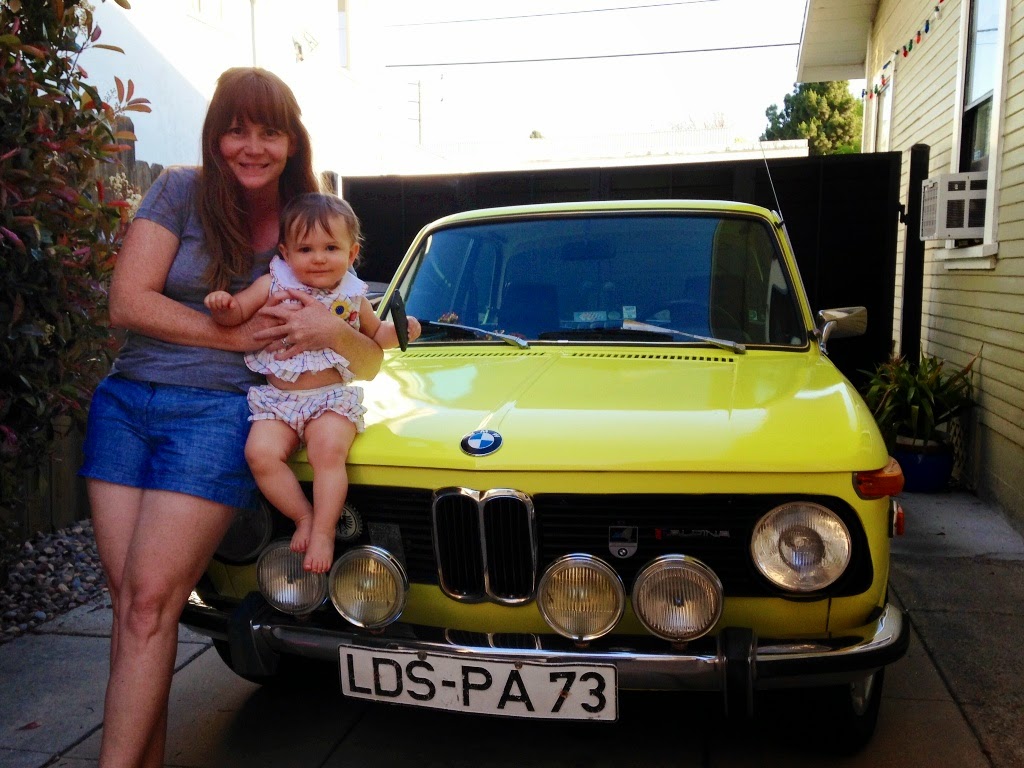 I started out this idea that I wanted to buy and drive all the cars I wish that I had in high school. I am now on Number 2 on that list. Right now I am thinking I may not make it on to Number 3 any time soon 🙂 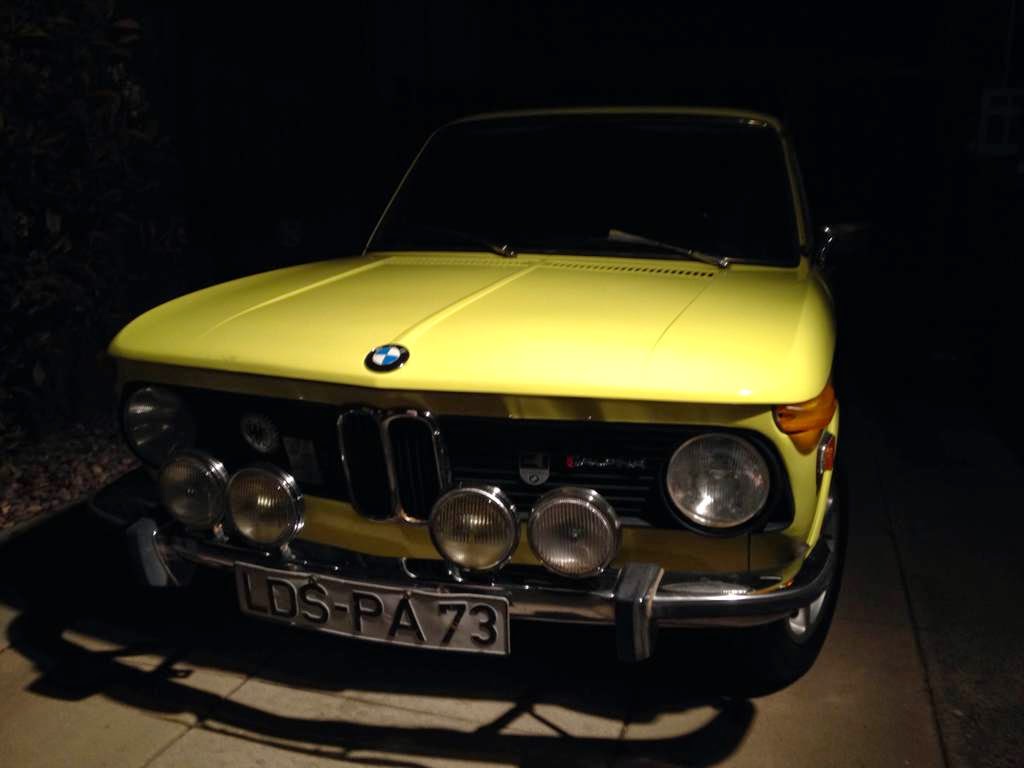 Note from CFlo: My wife named the car Schmetterling after the German for butterfly. The Schmetterling will be a recurring addition to the DT Project Cars roster. It has a numbers-matching M10 engine with a Weber 32/36 DGAV carb and the original 4-spd manual. It’s a solid, great looking car, a willing companion for fun drives…but not without some needs. I’ll post photos and writeups as I finish the jobs, as long as I can pry the keys away from my wife long enough to do the work… 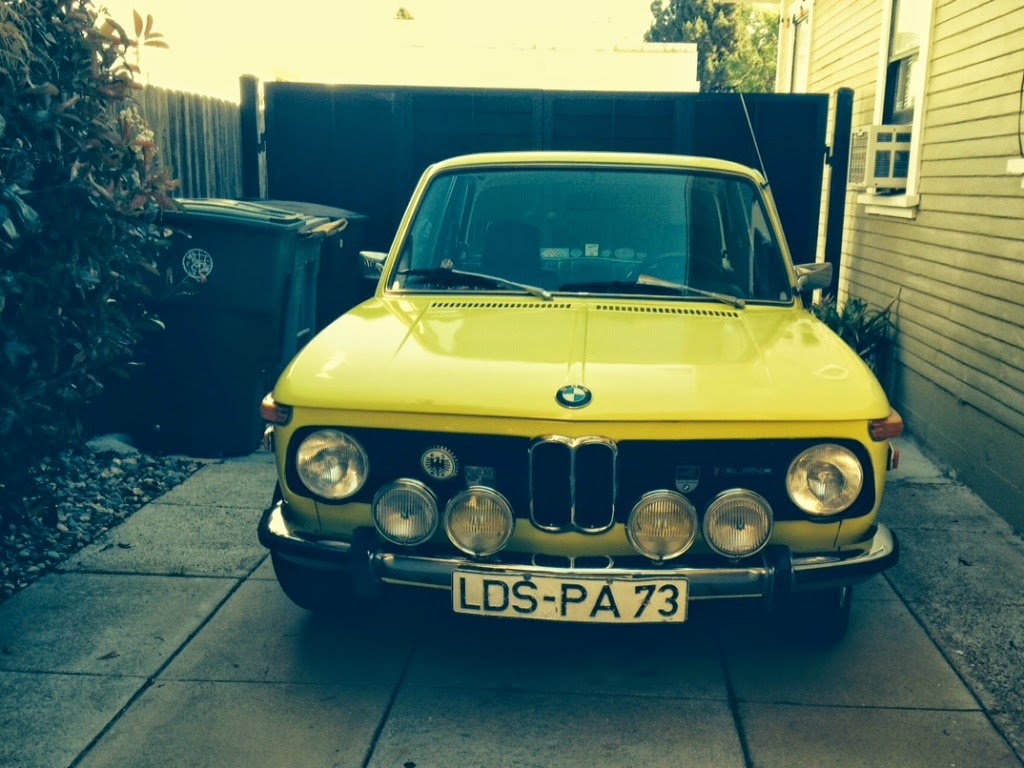 Find an affordable classic in a louder color? Email us here: tips@dailyturismo.com