Horrific events in Paris this week are a profound injury to a world media community already reeling from a string of tragedies over the last year. Daily Turismo stands somewhere between serious journalism and the scrawl of a madman with a Sharpie in a gas station men’s room, but freedom of expression for every person should be an assumed right in this world. So sadly, this was not the case where our brothers and sisters at the French satirical magazine Charlie Hebdo and members of the Paris police lost their lives in unforgivable violence. 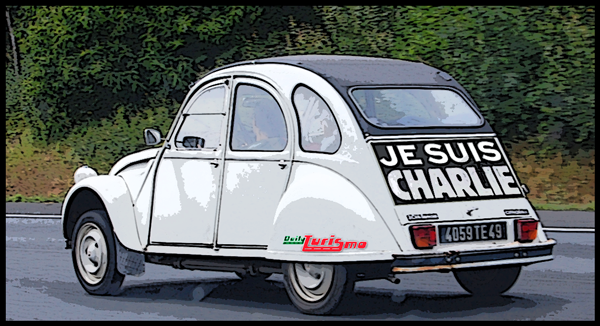 Charlie Hebdo had a subscriber base of around 60,000 readers, but you won’t find my name on that list. Its cartoons and content consistently violate common standards of decorum and good taste, no doubt about that, and it’s not to my taste. As a way to grab maximum attention in service of meaningful social commentary, the most effective satire is often crude, shocking, obscene, even blasphemous. But… and it’s a big but (and we like big buts around here)… most people in our world today agree that people who draw cartoons, writers of editorials, producers of blogs and magazines, and readers of said blogs and magazines, all have the right to say and think whatever nasty things they want to about Daily Turismo editors, Muslims, Cubists, Jews, Psychiatrists, Christians, Pre-Raphaelites, Hindus, Le Front National, Murricans, Rebublicrats, Volvos, Flatbrimmers, Other Car Site editors, and anyone or anything else; the targets of said ridicule had the right to refute, substantiate, or ignore the words on those pages; and NO ONE has the right to shoot anyone.

Accordingly, just as we don’t expect readers of this site to firebomb our house if we say something negative about the E30 BMW M3 (it is a slow, overpriced, poorly assembled piece of junk, almost certainly rusty inside the shock towers by now), the same should be true for any topic of discussion — anything under the sun — even something as sensitive as closely held religious beliefs. Without a basic, common, inviolable respect for human life, we are simply animals run amok… and that does not bode well for our future together.

Our thoughts, prayers, and condolences are with the families of the victims.

“I do not agree with what you have to say, but I’ll defend to the death your right to say it.” – attributed to Voltaire.