The Mercedes-Benz W111 was the equivalent of an S-Class Mercedes in the mid sixties and has gained the nickname Heckflosse (German for Fintail).  Technically the rear fins were called peilstege (German for sightlines) and weren’t designed for aerodynamic stability, but to help the driver find the ends of the car when backing up.  We would welcome such appendages in most modern sedans whose monstrously high belt lines (for “style”) have turned locating the bumper into a game of bumper tag.  Ironic that a modern S-Class lacks both the style and function of a classic W111.  This 1966 Mercedes-Benz W111 Heckflosse is for sale in frosty Anchorage, AK via craiglist for the hot price of $5,500.  Thanks for the tip from ANCMatt. 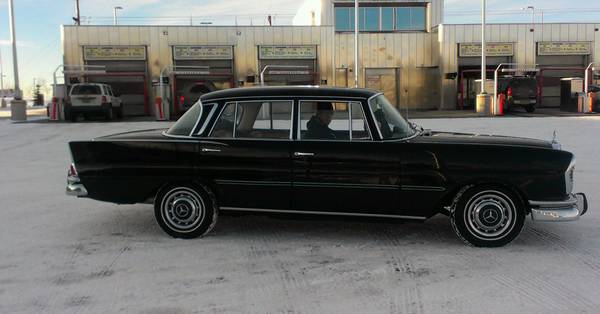 The W111 just screams classy, especially covered in a thick coat of Schwartz Benz lacquer paint – the old single stage paint jobs from Stuttgart are virtually indestructible and will shine up with some elbow grease instead of presenting belly like a modern multi-stage job. 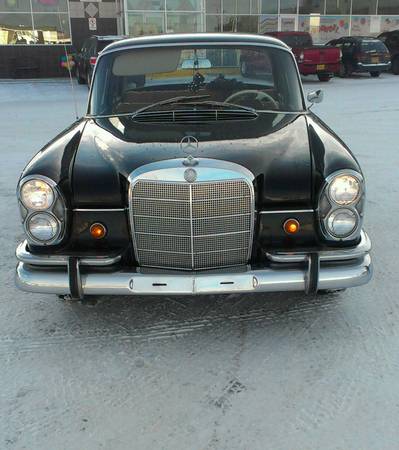 The W111 230S is powered by the M130, a 2.3 liter single overhead cam inline-6 cylinder engine that was based on the M180 that used to power the Pontoon styled big Benz W128.  The M130 makes 120 horsepower when equipped with twin Zenith carburettors and in this case is mated to a 4-speed manual transmission that is shifted by the desirable floor mounted shifter. In 1965 the W108 superseded the W111 as Mercedes big luxury cruiser, but the 230S model was selected to utilize the remaining fintail bodies, so the W111 lived for one more year.  The W108 is undeniably a more modern driving car, but can’t say we aren’t tempted by the occasional cheap fintail that shows up on our radar and this frosty classic isn’t an exception.  As a bonus the seller claims this car was once owned by supermarket mogul Fred Meijer.