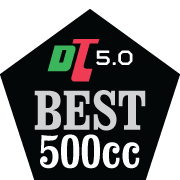 For the best 500cc bike I suppose I could have searched for some sort of race bike that had won numerous championships or something from the land of excitable people that gesture a lot with their hands, but I decided to go with “the triple with the ripple” from the two stoke nuts at Kawasaki.  Find this 1971 Kawasaki H1 500 for sale in Oceanside, CA currently bid to $5,100 on eBay with 3 days to go.  This post is part of DT’s 5th Birthday Celebration.

The H1 Mach III 500 was powered by an air cooled two stroke triple that made around 60hp, giving it a 13 second quarter mile time.  Along with all this speed and power it had sketchy handling giving it an evil reputation as a widow maker along with its 750cc bigger brother.  It’s rearward weight bias and peaky two stroke power delivery lead to a propensity to do wheelies either planned or unplanned.

This example with 23 bids at this time of writing, is said to be a mostly original, un-restored example, but then the ad goes on to say that the exhaust and painted body set has been replaced.  The seat upholstery looks a little suspect to me, given that heat embossed pleats were The Thing in 70’s motorcycle seats.  This one looks like it has vinyl that came off the bar stools in your uncle Al’s basement.  The bike has been sitting in a showroom and has not been started since 2011 and probably needs a carb cleaning and adjustment.  Hope the drained the gas or at least used E0, as that corn liquor gas will have done a number.

The only thing said to be un-original (except for the exhaust and painted body parts) is the chrome gauge bracket.  The original is included in the sale.