— by Hunsbloger.  Upon seeing this W123 Coupe with a modern V8 swap, my heart sang as this is one of my unicorn swaps.  Never mind that its using a slightly older (read lower horsepower) 5.6 M117 which the owner says is rated at 170HP and 380/ftlbs, its still an improvement.  The seller credits a now closed European Precision Service with the installation.   I was all set to fall in love, but like a termite infested home in Southern California it all looks great until you start opening the doors.  Find this 1980 Mercedes-Benz 300CD with 5.6 Liter V8 currently bidding for $2,025 here on eBay

with just under 2 days to go. 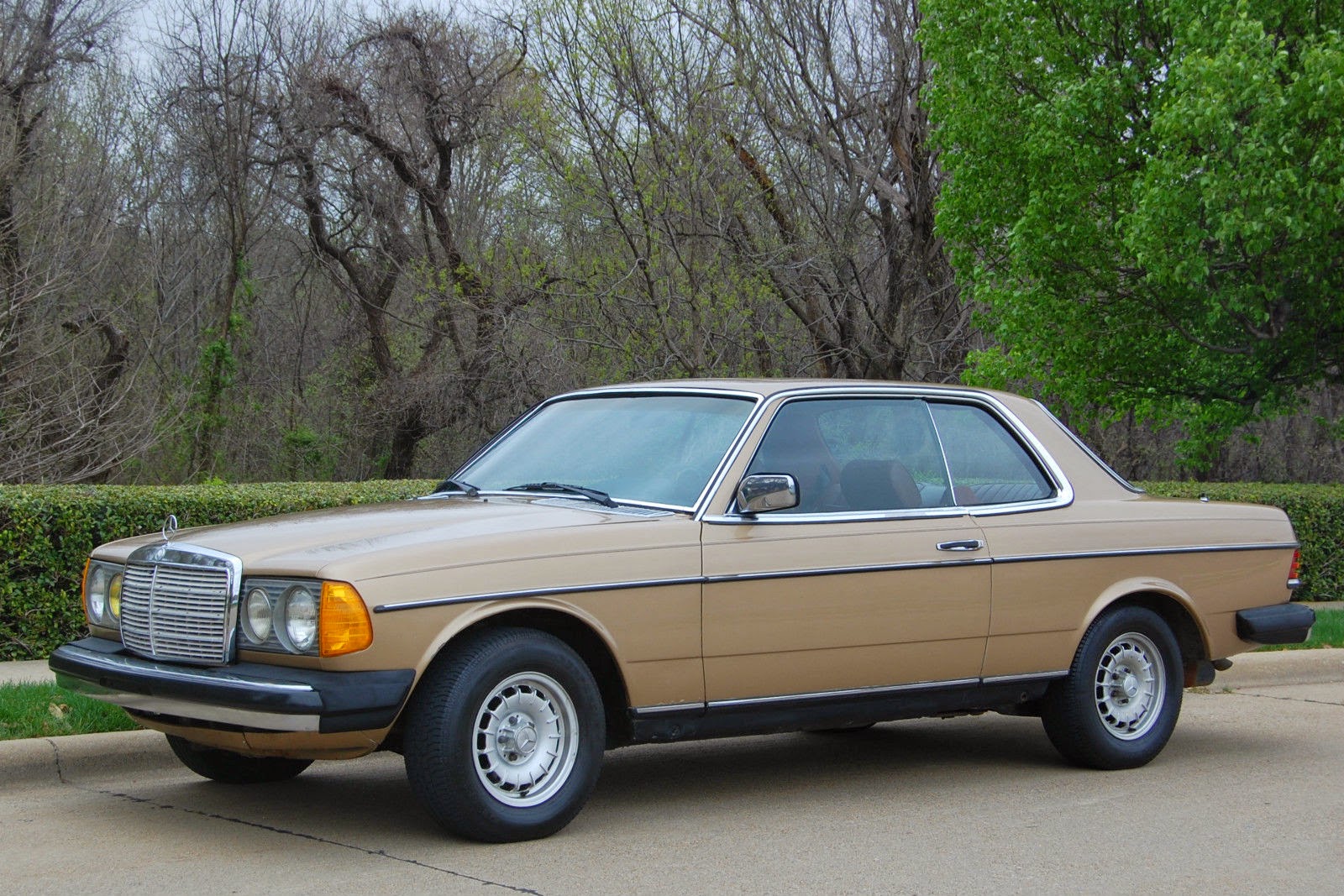 I personally like the metallic adobe exterior and brick interior which the seller identifies as Champagnermetallic over Nappa Red leather.  I was anxious to see what’s hiding under the hood but settled in for the slide show of the exterior.  These are nice pics and they deserve my full attention (another cup of coffee please). 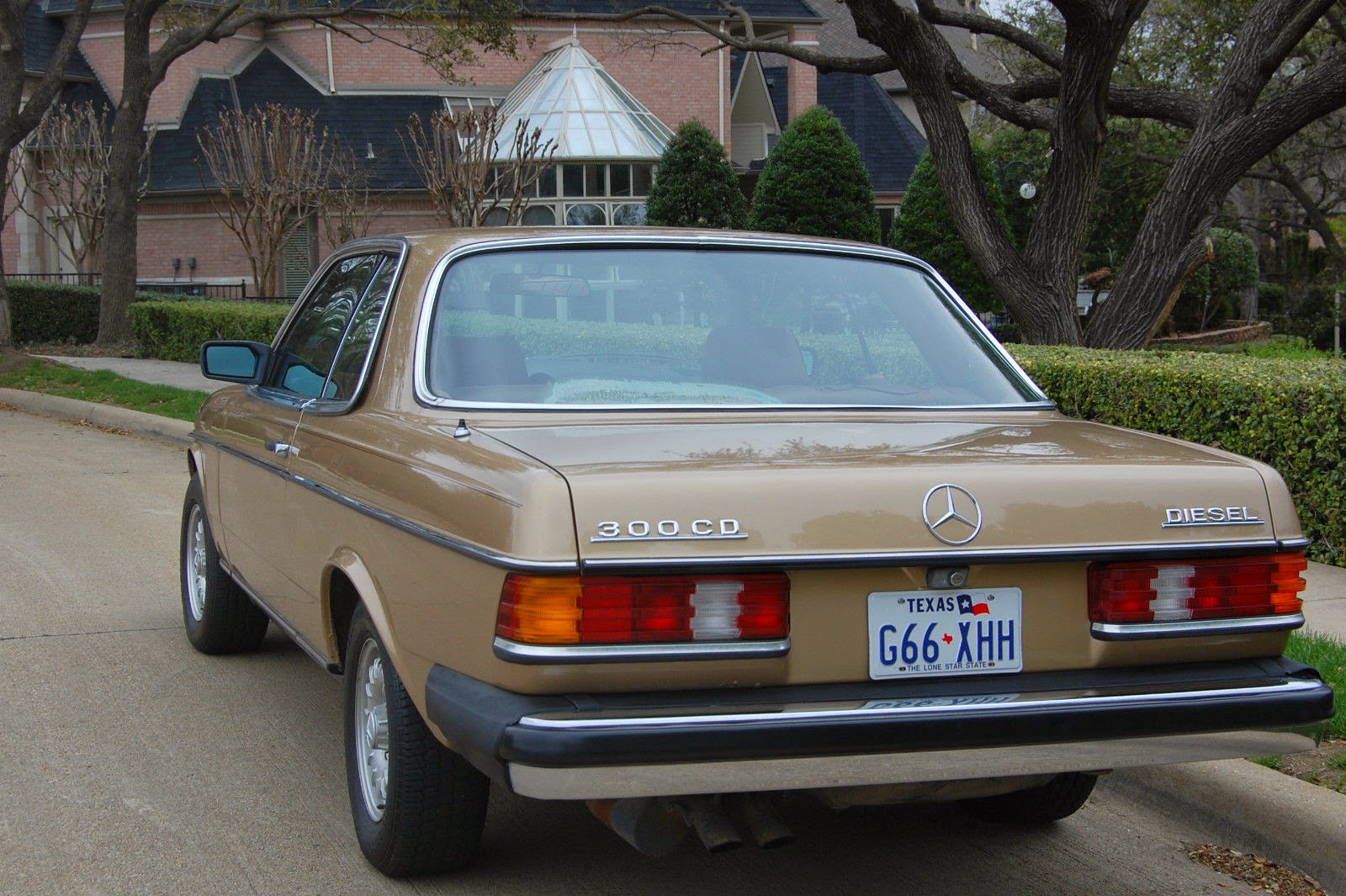 The 300CD is a perfectly proportioned personal coupe for a daily driver. Leaving the diesel badges in place allows everyone at Trader Joe’s to admire you while feeling sorry for you all at the same time. Minor points off for the missing three horizontal chrome dress ups on the grille, but the beauty shots presented in the 360-degree walk around are actually that…beauty. The Texas plates lend reasonable assurance that the frame and underbits are not one speed bump away from folding the car in half and so far the lowest point are the driving lights which remind me of all those wonderful Huskies with one dark eye and one blue eye. 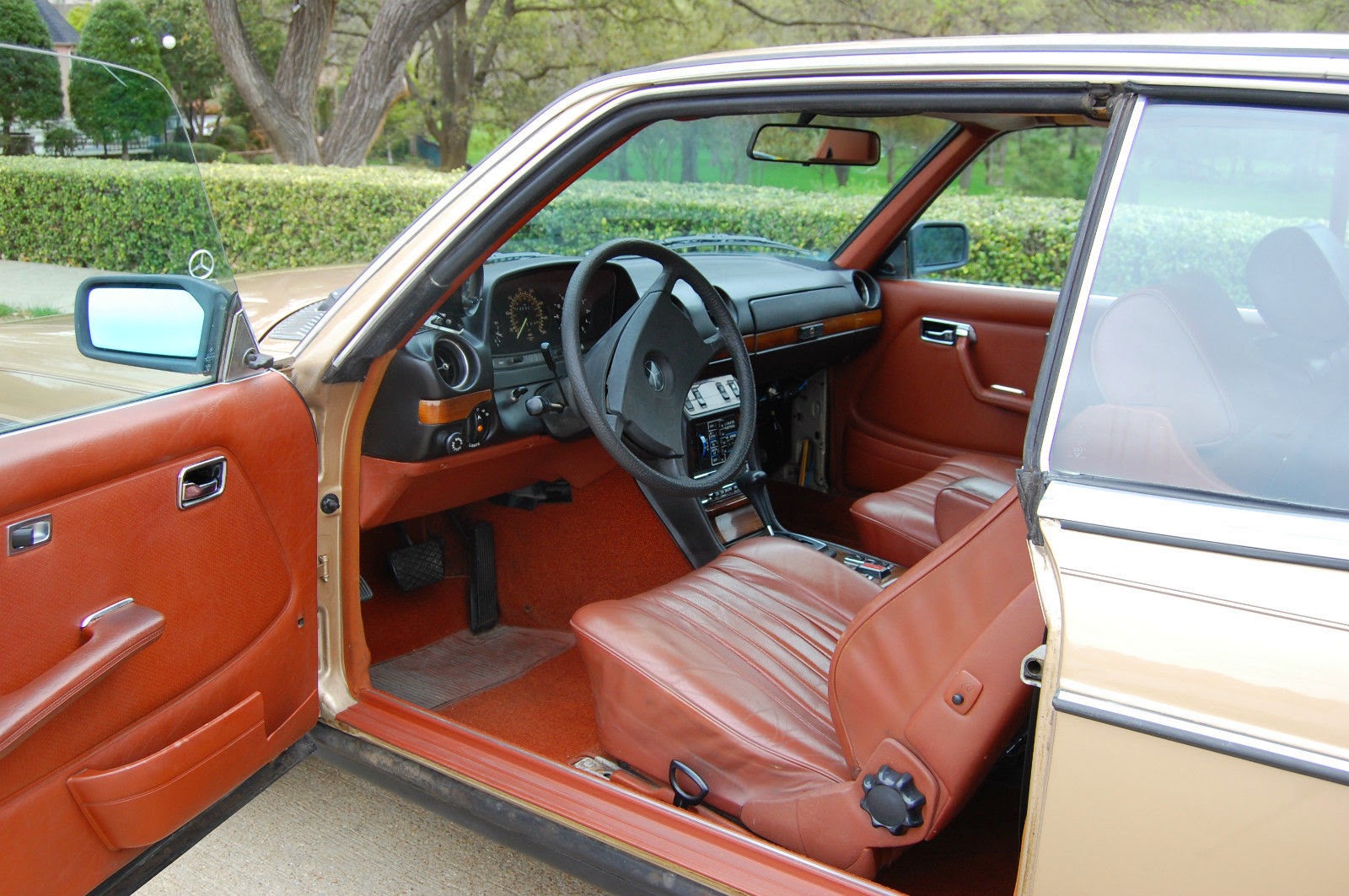 Open the driver’s door to settle in but….what’s that?! An exposed passenger’s kickpanel? Well that’s not so bad, the rest of the car is still looking good, so like a date with a run in her hose, I’ll still play for a bit and see how this plays out. But open that driver’s door a little further and what’s this… Looks like someone was just a bit too dedicated in their attempts to retrieve that quarter for the toll both as they’ve kind of destroyed the driver’s side map pocket. Waviness and reddish tint along the bottom edge of the door side weather stripping sets off some alarm bells…but I don’t see any flame yet…just smoke. 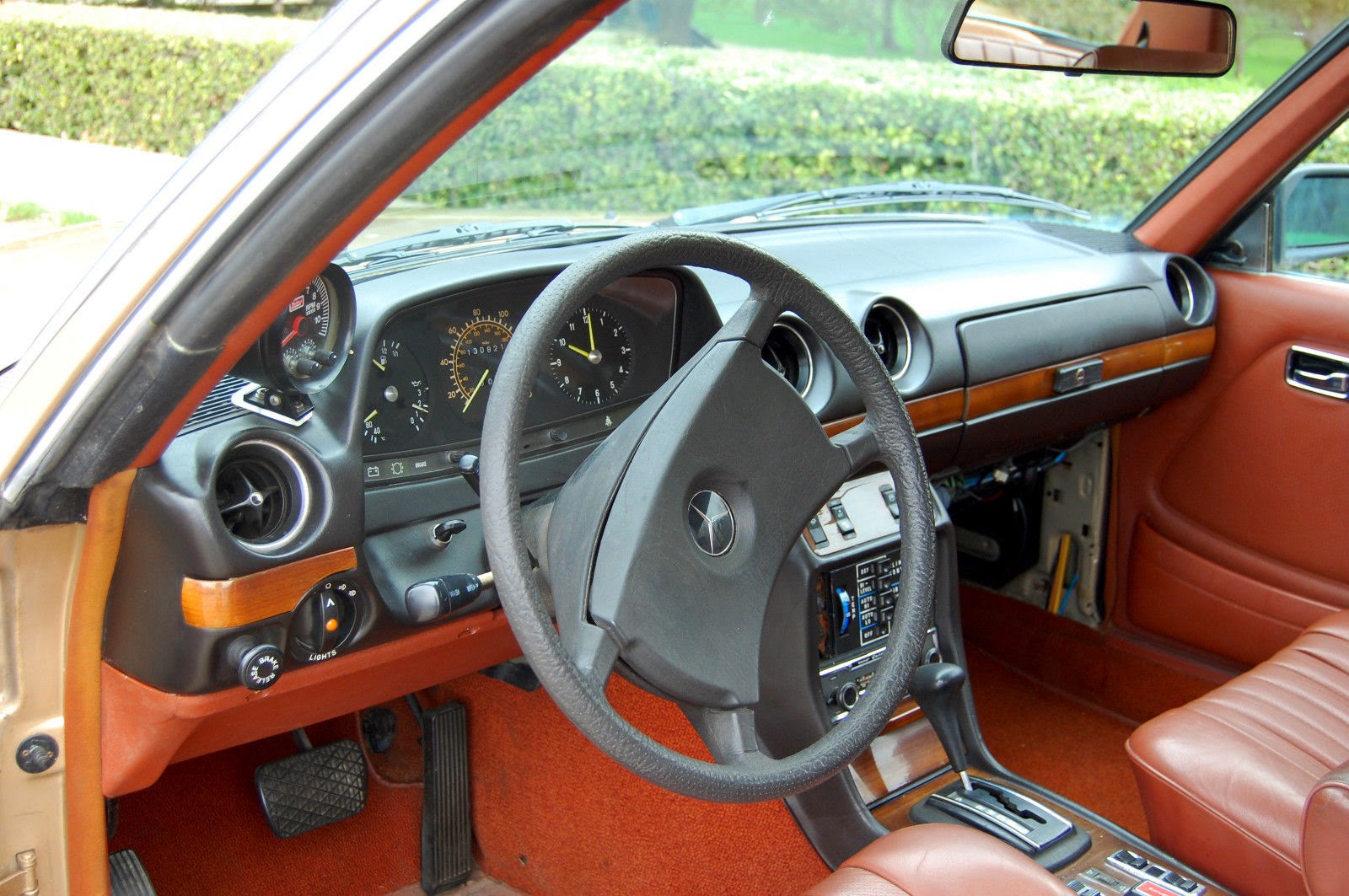 But lets take a look at the bidness end of this thing. We’re gonna be sailing down the highway and need some gauges to read, but for the sake of all that sacred in Stuttgart who mounted that huge ‘mericun tach on the dash?! But, still not dissuaded, after all if this is hiding major horsepower, we want to keep track. But, man, that Carpenters pencil stuffed in the passenger’s side kickpanel is making me wonder if this wasn’t engineered in pencil rather than in pen. Well, in spite of a few flaws in a few spots which aren’t going to be seen by most, we open the passenger’s door which now reveals that our date is slightly less well kept on the inside than her party dress suggests! Check out that underdash shot!  I don’t see a lot of zip ties or chunks of black electrician’s tape, but you gotta wonder if you NEED to have daily access to that mess-o-wire just to get this thing going every morning. 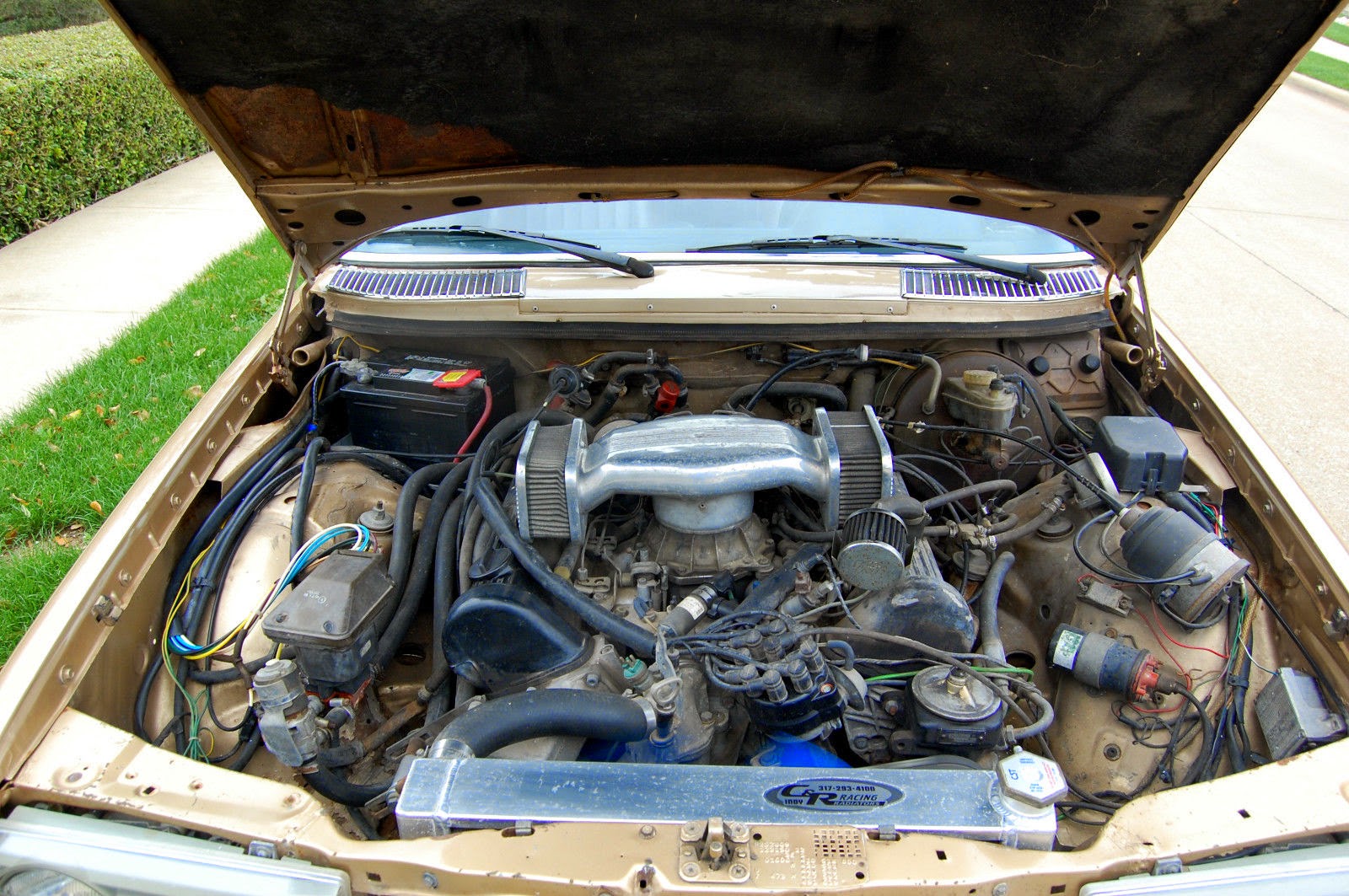 Lets open the hood and see what’s left. C&R Radiator. They know where to source quality afterbits, and then there’s the hot rodder’s favorite air breather for low profile engine swaps and a k&n valve cover snorkel, but the rest looks like stock Benzus, but should I be concerned when the water temp gauge on the dash is reading normal, but the water temp sensor is not hooked up under the hood?  The photos could have been taken at different times, but the bigger indicator of the car’s ability to regularly move on its own power is the fuel pressure gauge hastily added via a brass t-fitting on the driver’s shock tower.  As someone who has driven around with fuel pressure gauges zip tied to windshield wipers, this can only mean that some fiddling was/is required to get this thing to run correctly. 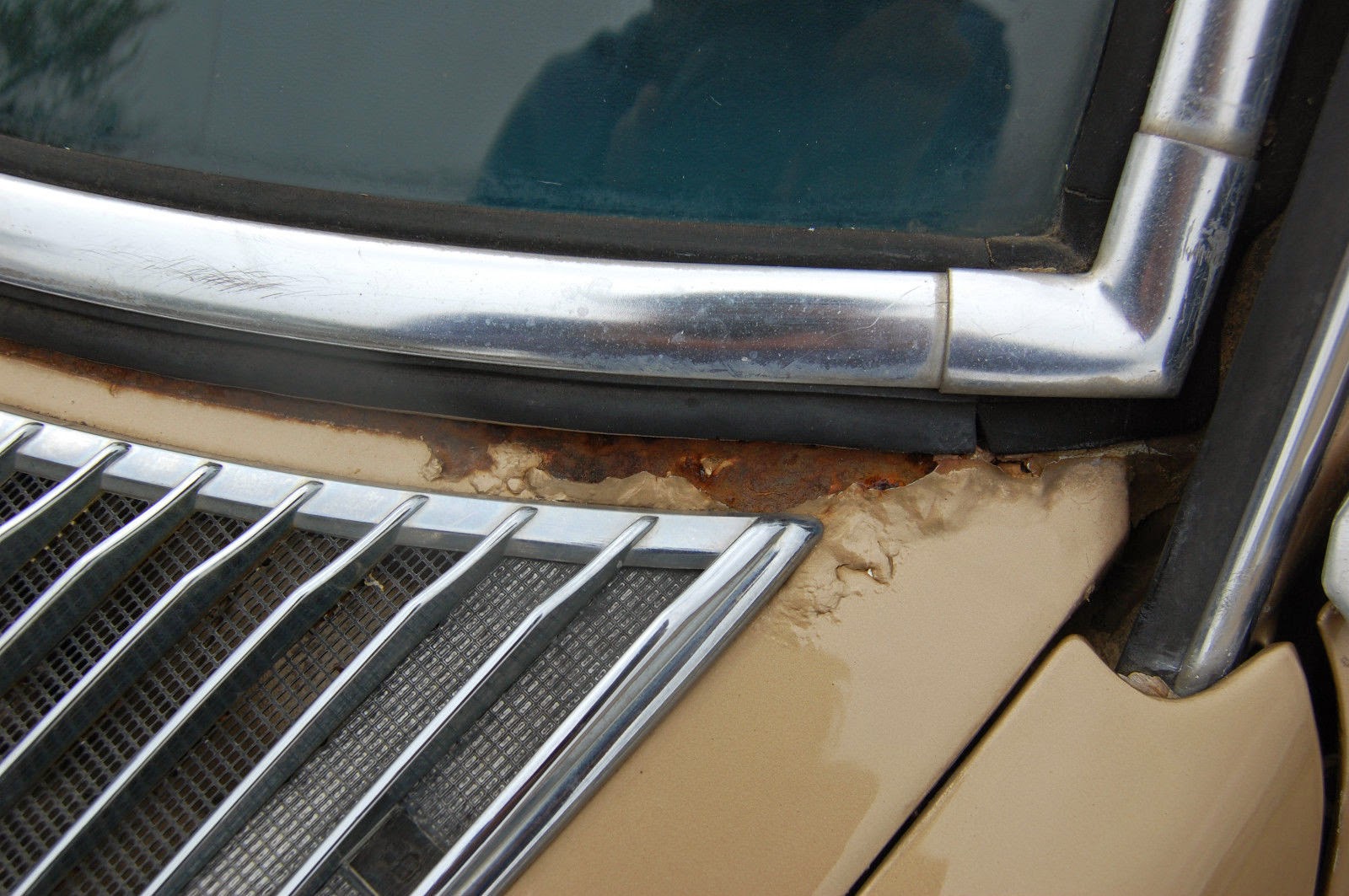 But now the party is in full swing and someone has to smile and reveal horrible dental decay! The base of the windshield on the drivers side is evidencing some serious (old) rust. No so much because of the size, but because it appears to be rusted through on the interior side of the firewall. I’m also seeing some sign of what appears to be leftover tape painted bold where the door trim meets the front fender suggesting this has been resprayed. 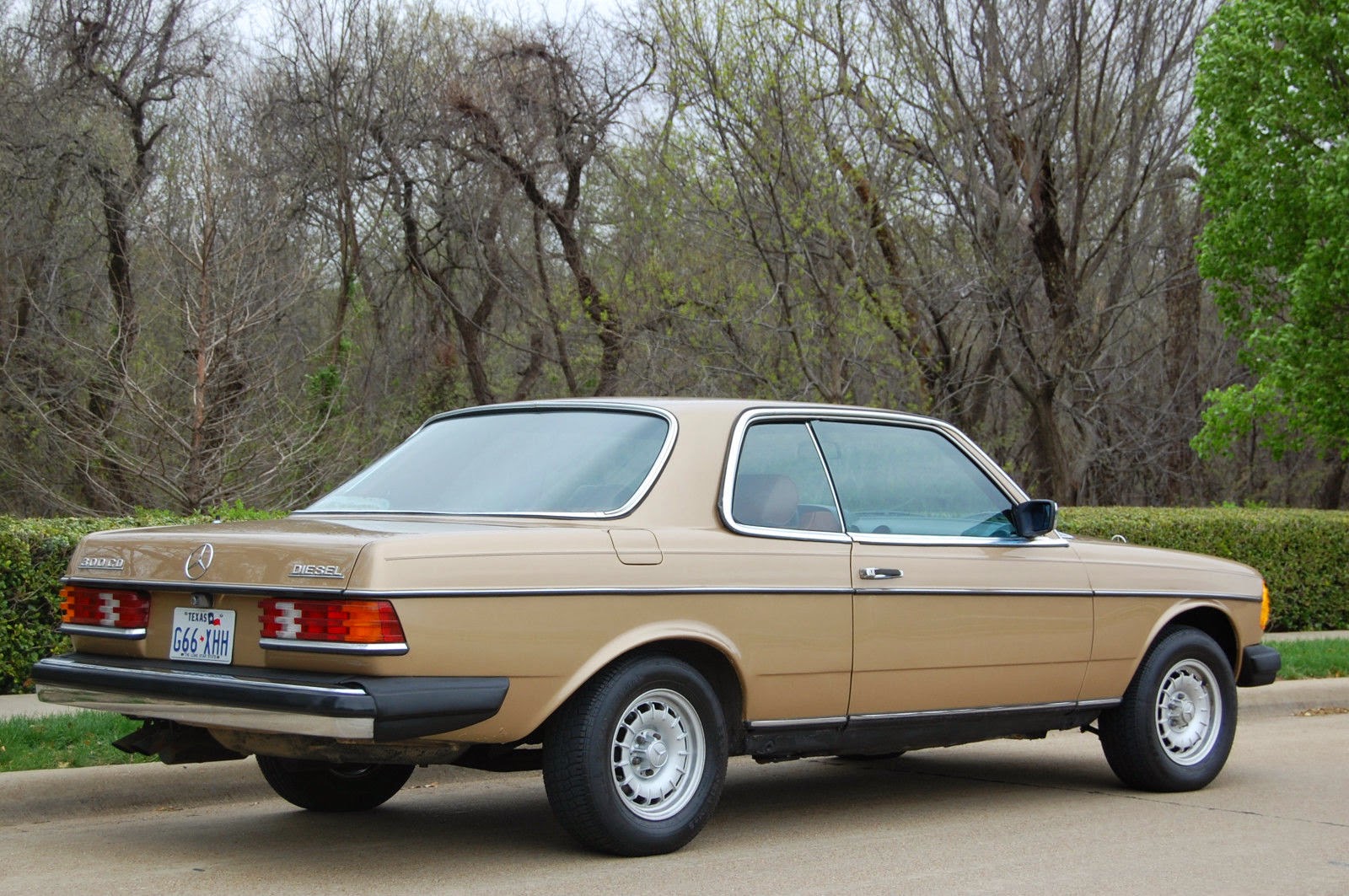 All said and done, when I first saw this car I couldn’t believe how low the bidding was…but now, I understand. Still…for $3k, this wouldn’t make a bad beater.  See another V8 powered ex-oil burner? tips@dailyturismo.com