Our New England area readers (if there are any Yankees reading this) might want to check out this nice little Volvo we stumbled across recently – it’s what appears to be a very solid 1974 142, with upgrades in the form of a one-year-newer built pushrod B20 engine, M46 4spd + overdrive transmission, and some custom interior work. The deep red color suits the 140’s crisp lines well, and the fog lights mounted on the massive Commando bumpers mean that you’ll be able to clearly see anything you bash into, and then drive away unscathed. Find it here on Albany’s craigslist (but located just across state lines in western New Hampshire) for $5500. 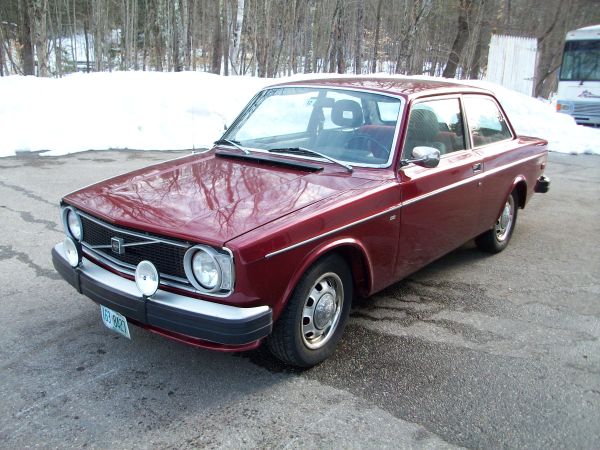 The engine in this Scarlet classic is a ’75 B20…so it’s a pushrod four, just like the car would have had originally, but one year newer. It’s a challenge to fit anything other than an upright four-cylinder in a 140 engine bay because of the double a-arm suspension geometry and intrusive inner fender sheetmetal. The 240 chassis, while based on the 140 has a much more swap-friendly McPherson strut suspension setup in the front, making for a roomier engine bay. So it makes sense to stay with the B20 in this chassis. 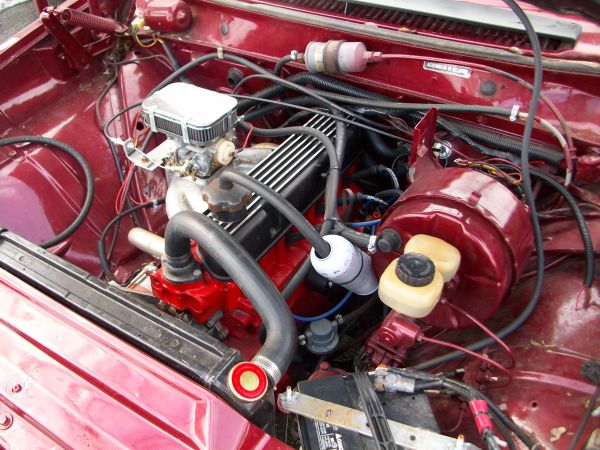 The seller states that this particular B20 is “POLISHED PORTED AND STROKED WITH COMPLETE EXHAUST INCLUDING STAINLESS STEEL HEADER.” That’s cool – and it should make more than the 98 hp (SAE) that it did new. But Captain Capslock doesn’t give any more information on the build, or explain why the fuel injection was tossed in favor of a single Weber carburetor. This engine could make 125 hp or it could make 150; either way it should be a fun drive and reliable. The body-color brake booster, master cylinder and hard lines (not to mention overspray on the fuel lines and filter) make us think that this was a quickie respray job that was probably done recently. Hmm…could there be any rust or bondo hiding underneath? 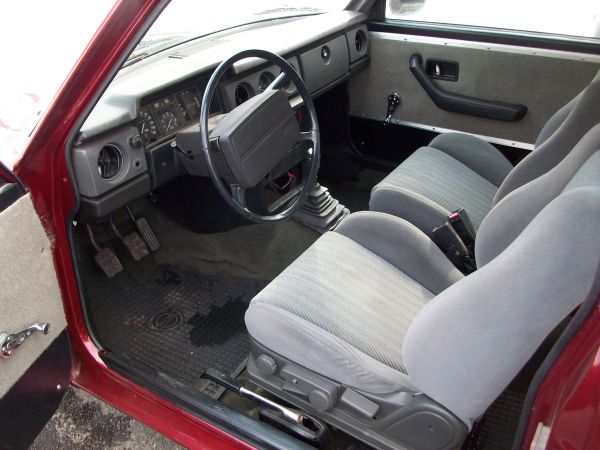 The interior is actually largely stock for a ’74 142 except for the seats and door cards which both look non-Volvo. We are thinking the seats may be Recaros or similar, from a Honda or Mazda. That chunky dash is stock for a late 140 and looks very similar to the 240 dash setup used from 1975 until 1981 when they changed to the larger instrument cluster. Even though this interior is a mish-mash it seems clean, livable and perfectly acceptable for a daily driver. The hot-rod “billet” window cranks are an odd touch. But the bolstered seats will definitely hold you in place better than the standard 1974 Swedish orthopedic sofas would have! 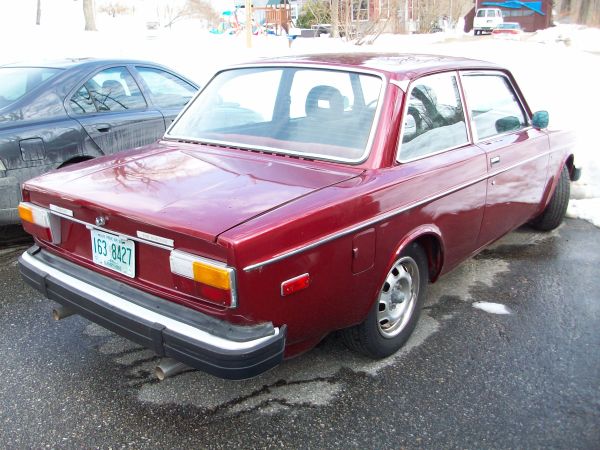 From the rear this car looks almost exactly like a ’75 – ’78 242, which isn’t a bad thing. The slotted steel wheels are the only obvious giveaway in our eyes that this is a 142 from this angle. We like this car as a cheap but upgraded classic and it should be a great daily driver for the next owner. The 140 series is the original bricky Volvo, and lots of them are still buzzing around today. Unfortunately many more of them have gone to whichever Norse Great Hall that old cars ascend to when they die; Valhalla is for fallen warriors, so maybe they go to Volvhalla?