DT is all about great driving cars, but its also about getting the kids to and from all their appointments and… hauling parts! This 1966 Ford Falcon Futura found in Marina del Ray, CA via Craigslist can certainly handle all those tasks while keeping its new owner well insulated from the high cost of ultra rare replacement parts for the low asking price of $7500. 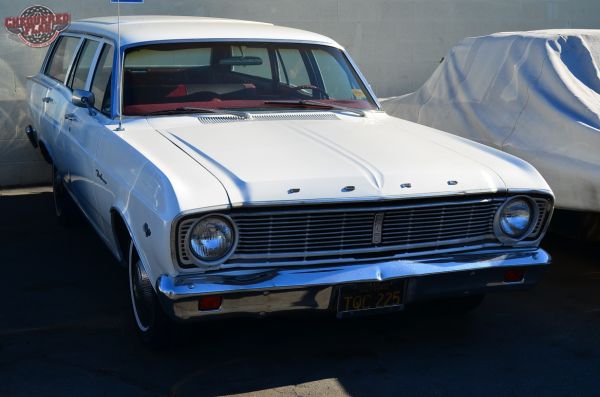 Before readers start to complain about how we are big Falcon fanboys – remember that without the Falcon, there would never have been a Mustang. The ’61-63 Falcons had nice rounded lines but were not very robust.  Ford’s ’64-65 Falcons relied upon a slightly edgier set of lines, but didn’t really evolve.  However, by 1966, Ford started to transition the Falcon into the size range of the larger Fairlaine series and this wagon benefits from that increase in size.  At some point, this car must have been given the ride-of-shame because its front bumper has definitely been the victim of an overly aggressive
come-along (look just above its original black plates) 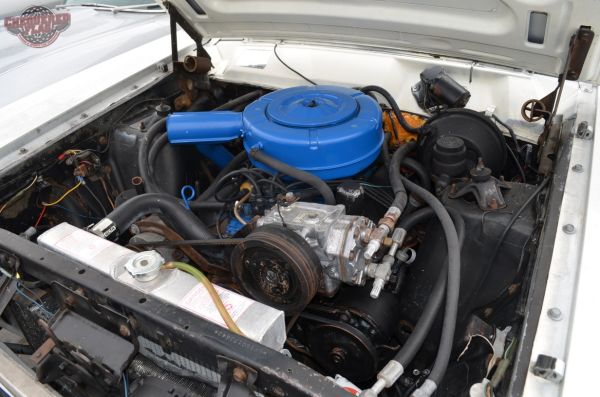 Any DT reader worth their subscription price would certainly yank open the hood to see what kind of story can be told.  Once upon a time, this little white wagon left one of Ford’s plants with one of their ubiquitous C-Code 289’s.  While boasting about 200 horsepower, they were those old style horses, which were not nearly as tough as the later SAE Net Horses, but even so…it should still move easily in traffic today.

On closer inspection that looks like a factory A/C compressor mount and power steering. Someone’s added an aluminum radiator and has changed the coolant recently (or its leaking), based on the telltale Mountain Dew green looking stuff heading towards the overflow tank.

Either the car has been painted, or someone has tried to give the hood bumpers a white pedicure (they also get just a little on the wiper motor).  This is in direct contrast to the sellers assertion that it has ‘original paint,’ perhaps they mean ‘originally applied last week?’  They also had just enough Ford Blue sitting around to gave the air cleaner, dipstick and manifold some love. Nothing like a $10 can of fresh Ford Blue to add $2k to the asking price! 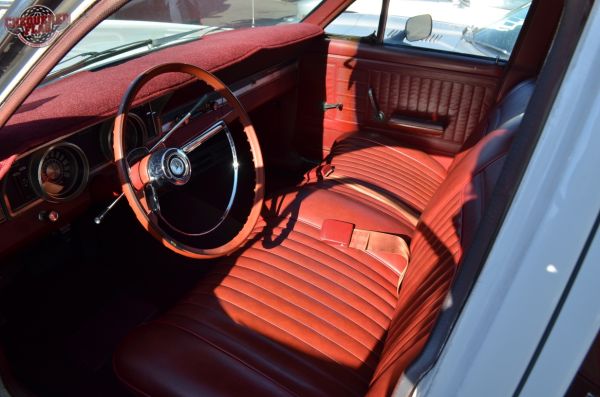 Advertised as having 52,000 miles, there is nothing to indicate whether
that is for once or more times around the 5 digit odometer.  Either way, it appears to
be generally well preserved. The interior is better than decent for a car of this age and type (after 5 decades of kids spilling stuff in it).  Frankly it just needs a good home!

Offered by Chequered Flag International in Marina Del Ray, CA, these pictures show that they are sufficiently proud of it to put it onto their lot (where it was flanked by what looks like a Series III XKE Coupe and a Jenson Interceptor), but its apparently not nice enough to make it to their website Inventory, where it didn’t make the cut with the other (11) Fords for sale or their (14) Ebay Listings. 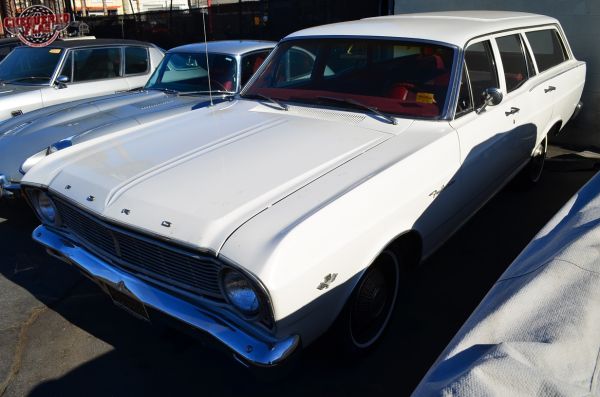 I mentioned their website and Ebay listings only to illustrate that they are offering this car on craigslist instead of their usual outlets. How hard are they trying to sell this car?  Perhaps, they don’t want to be seen selling this car.  Why have they kept this car??

We first saw this car listed back in October running the same pictures, so we’re thinking that this one is eligible for some serious haggling….. It car has been advertised multiple times on craigslist for more than 60 days.  Its certainly starting to look stale on their lot.  Has it been driven?  (The ad in October read the same 52,047 miles.  So, if you go and look at the car and it has say 52,051 miles on it, they’ve had ZERO interest shown in it.  They haven’t even used it to haul stuff from Home Depot on the weekends.)

So.. here’s the deal DT readers; if you need a decent wagon, its time to move this one out! Over 60-days in inventory, Christmas Special, Before the Year Ends, Bring us Your Craziest offer of say $4850 and settle with them at $5250.. and drive this beast for the next year or so.  But please put some decent looking wheels on it before you send us the pictures of it in your garage.  A set of Magnum 500’s or Torque Thrust IIs is about all this little gem needs.

See another Falcon that could be in your futura? email us here: tips@dailyturismo.com