First off, let’s get this straight:  I don’t name my cars.  I don’t assign them genders.  This being the case, what I call “the Volvo”
was named Helga by the original owner.
The second and third owners continued to call her Helga.  45 years later, it would seem inappropriate,
maybe even bad juju, to not continue the tradition.  So, although we here in Austin will probably
refer to her as “the Volvo,” following is the promised update on Helga’s
relocation to Texas.

I met Kevin from West Virginia and his wife at the
Huntington airport on Friday afternoon and hit the road in a slow drizzle,
which soon cleared. The twitchy gas gauge brought back fond memories of my ’63
122 with the Anti-Theft Paint, and I settled in pretty quickly.

On our way to Lexington, Kentucky, we were
passed more than once by Harley dudes who looked over, grinned and gave us a
thumb up.  I stopped once for gas and
once for a quick once-over and both times was asked, “What year is it?” We got
the same reaction and more in Lexington, where we stopped for the night.  This car makes people smile.

Rain was expected overnight, and I explained to the valet
that the trunk seal was past its prime, so he pulled her under the porte
cochere for the night.  He told me later
that they’ve had a lot of cars parked there, but none got as many comments as
the Volvo.  I think she classed up the
joint.

We headed out the next day in perfect driving weather for a
car with no air conditioning – low 80s, overcast, and dry. That changed pretty
quickly and the rest of the day the weather alternated between the remains of
Isaac and clear skies.  I filled the 12
gallon gas tank every 200-250 miles, since the gauge was less than believable.

We
stopped by the National Corvette Museum in Bowling Green just in case Helga
needed a little encouragement.  I met
Rick from Memphis in the parking lot.  He
was meeting up with someone he’d just bought a vintage motorcycle from.  He wanted to know the whole story and see the
engine. Just after dark we hit a dead stop on Interstate 40 east of
Little Rock.  I think the Arkansas Highway
Department had been waiting for a holiday weekend to shut the interstate down
for maintenance.  It. Was. A. Parking. Lot.  Every once in a while traffic would move and
then, again, come to. A. Dead. Standstill.
We were stalled for 2 hours, and Helga’s temperature gauge needle never wavered.
FINALLY we came to an exit I could take,
and we were in the middle of nowhere – on a dark twisty two-lane road, with a
full moon and Dire Straits playing too loud on the iPod.  This is when Helga and I became friends.


We pulled into Conway, Arkansas 2 hours behind schedule to
visit my daughter and spend the night.  The
next morning I cleaned the wind screen, and since we only had 170 miles on this
tank of gas, we hit the road.  Big
mistake.  We’d apparently idled and
twisty-turny-roaded away 70 miles worth of gas the night before, and 13 miles outside
of Conway we were on Interstate 40, out of gas.

More accurately, we were 13 miles outside of Conway, in Mayflower,
Arkansas, on Interstate 40, out of gas, 100 yards south of Chris’s Volvo’s
Etc., the areas only Volvo mechanic, which was open on Labor Day.  Wow.

Keeping a long story short, Jedi Apprentice Volvo Mechanic Brice
towed Helga to the shop, where he and Jedi Master Volvo Mechanic Adam checked
out the SU carbs, checked out the fuel pump, put her on a lift to check the
fuel line, and finally blew compressed air into the gas tank to prime the fuel
pump. After having their pictures taken
in Helga, we hit the road again.

There were no other incidents, and 1,352 miles after starting
we pulled into home in Austin, Texas.  I
just picked her up from Redline Automotive and Marine, my old Volvo mechanic,
where Troll (I kid you not) changed the oil and filter; transmission, steering
box, brake, hydraulic and rear end fluids; flushed and filled the coolant; cleaned
the fuse box and replaced the fuses, which took care of all the electrical
issues; rotated the tires; tuned her up; bled and adjusted the brakes; popped
in a set of halogen headlamps and replaced the burnt out dimmer switch; and, did
his best with the SU carbs, which need to be sent off and rebuilt.  (I asked whether, rather than sending them
off and having them rebuilt, it would make sense to install a pair of Mikuni’s.  Troll said, “It CAME with SU’s and needs to
HAVE SU’s!  We aren’t putting JAPANESE
CARBURATORS on this car!”  Troll did a
LOT of work on my ’63 122 back in the 1980’s.
He’s a fairly short guy, but I remember his Volvo back then had a bumper
sticker that read, “Rugby Players Eat Their Dead.”  My response to him was, “That’s what I meant
to say.”) 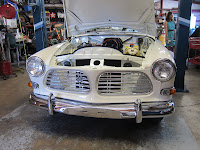 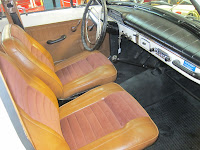 So, $650.00 later and The Volvo, AKA “Helga”, is in the driveway.  The carbs are tweaked enough for now although
they still need to be rebuilt.  After
that, a PerTronix ignition and an alternator will go in before the Vintage Air air
conditioner – we DO live in Texas.  We
have a number of other modern touches in mind, as she will be a daily driver,
but nothing outlandish.  One of these
days we’ll take her to Toomey’s Auto Works and have them sand and buff the
paint back to a shine, like they did with the white 1967 122 that was in Troll’s
shop today (see attached photos).  And
one of these days when she’s properly road-trippable, we’ll stop back in
Mayflower, so Adam and Brice can have their pictures taken again.