The Left-Handed Spanner by Kaibeezy.   I was away last week on business, which is not unusual, except this time I left just as we were getting started with a substantial renovation of our downstairs loo (bathroom) and utility room. When I left, we had agreement on the work to be done, which was fairly modest and involved adding Kingspan (insulation) behind new plasterboard (sheetrock), replacing the bathroom furniture (fixtures), and most ambitiously, breaking up the old tile floors, leveling, adding subfloor heating elements, and then installing new tiles. (Fig. 1. Note: not the actual loo, I just like that one)

A couple of days later, my wife texted me a photo of the progress, and, yep, the entire space was stripped out down to the stone walls. Completely scooped out like an avocado. I remember a friend of mine once showing me the result of that surgery they do for some sleep apnea sufferers, where they cut back all the uvulas and tonsils and other fatty, floppy bits that rattle when you snore, and his gullet looked like a largemouth bass, basically. Similar.  (Figs. 2 and 3)

What does this have to do with cars, you are wondering. Well, when I got home, the utility trailer was full of what still didn’t fit in the unexpected second and even larger skip (dumpster) and it needed to go to the recycling centre (recycling center). I’ve never had a camping trailer, driven a semi, hauled a snowmobile, operated a mobile pizza oven, or any other activity that involves regularly or even occasionally connecting and towing a trailer. I’ve literally done it 3 times in 35 years of driving, and each time had someone with me who knew what they were doing.

We bought said trailer (Fig. 4. Note: actual trailer. Guess what those brown garbage cans are called… yep, “green bins”, because they’re for green waste, aka: grass clippings, food scraps, shrubbery prunings. Guess what color bin the regular trash goes into… yep, it’s green.) a few months ago partly in anticipation of this upcoming project and needing to haul a couple of loads of materials around. It’s 8′ x 4′ (4′ x 8′) and can hold quite a bit of stuff. Fine. The Land Cruiser has a towing ball (no, not the squicky Euro banana kind that is so happy to see you; Fig. 5) and it’s pretty straightforward, so I got it physically connected. The eleventy prong electrical plug (Fig. 6. Note: actual plug) is another story, never cooperates, and then you have to check it. The (indicators) turn signals I could check myself and they were fine, but the brake requires a helper, in this instance my 7-year-old. “Did it light up?” “Yes, daddy.” What could go wrong?

On the drive to the dump, 15 miles or so, I noticed cars behind me coming closer than expected when I slowed down, and after that following further away than usual. Isn’t it amazing how you are able to notice something that subtle? It’s almost like a seventh sense. Like when the wildebeests, thundering across the savanna in their thousands, turn in synchrony as if telepathic. (Fig. 7) So obviously my brake lights are not working. I slowed it down substantially, took majestic, unhurried turns, and wafted into the dump area unscathed.

Most of the debris was plaster lath: old, jagged splinters of 150-year-old cedar, spiked every couple of inches with old-school diagonal cut nails, the really, really, really, really needly sharp kind  (Fig. 8). I had those rubbery coated work gloves on, got poked several times by both vegetable and mineral, but didn’t draw major blood, which seemed like success. I’ll follow up here if I’m unable to move my jaw tomorrow. (Fig. 9)

Checking and fixing the brake light seemed like a good idea, so scootched (made my way carefully a short distance) over to the Halfords (Pep Boys) and asked for free help, which they do for bulbs and wiper blades and such. Mainly, I wanted not-a-7-year-old to confirm the brake lights. “Did it light up?” “Yes… no… try it again… yes… no.” That’s actually not bad. It’s not the bulbs, it’s an intermittent connection, likely corrosion. Inspecting the electrical connector, it looked clean though. So I stood there and stared at it for a while and the light bulb went on… in my head. I thought the last time (which was also the first time) I connected it, that prongy thingy there went into that hole there. Sure efreakingnough, the connector comes apart in two places, like there’s an adapter inline, and it was the second connection that had corrosion inside the little brass pluggy tube-y bits, about 3/16″ inside diameter. (See Fig. 6, above)

All I needed was something to scrape out the foost (crud) and I’d be good. Ah, some shrubberies. I reached into the bushes to pick up a twig. People going into the shoppe (shop) are looking at me funny. “YEEEEOW!!!” The twig was armed with half-inch-long needle spikes! (Fig 10. Note: Berberis Thunbergii or very similar; not the actual twig) One has sunk hilt deep into the fleshy part of my thumb. People looking at me funnier. “Gah, it’s a hypodermic needle!” Said the big, hairy American reaching into the shrubberies in middle of the parking lot at the far-northern UK auto parts store. People scootching away quickly. 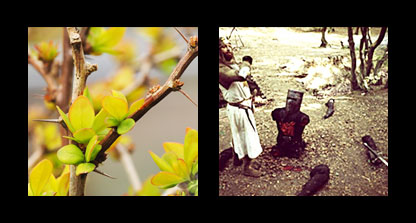 I snapped the needles off, the twig did its thing, the foost was loosed, and the brake lights were back to normal. Go ahead and accuse me of clickbaiting. You thought there was going to be some Russian-grade dashcam carnage, didn’t you? (Fig 11)