The DTM5 is on the Market! 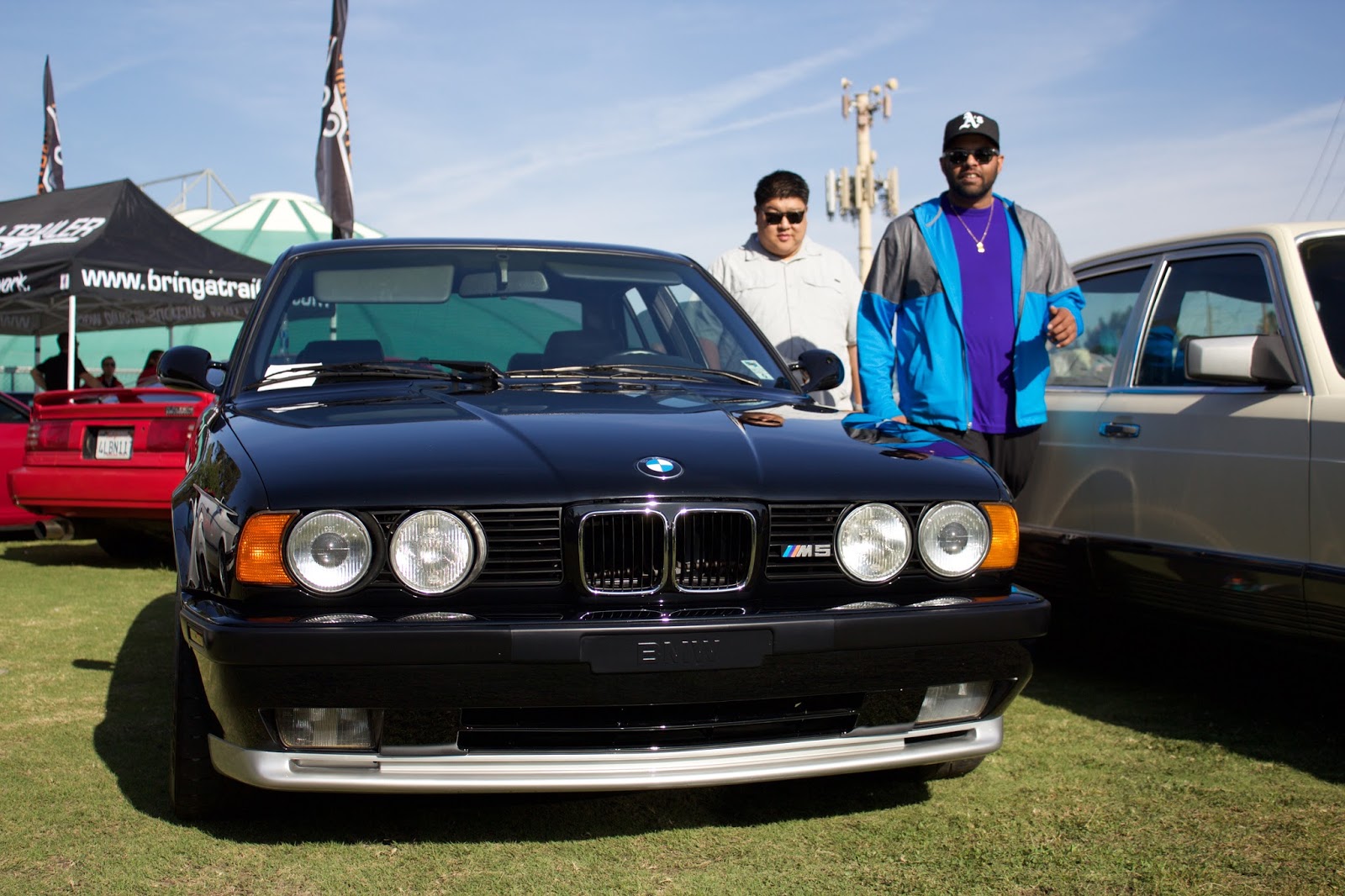 It’s always sad to part with a cherished car, but recently I have come to realize that we are all just temporary caretakers of the machines we obsess over. You can’t physically take a car with you to the great endurance race in the sky. But parting is bittersweet if you split up with an awesome car that you’ve bonded with, even if it is in the name of moving on to new and different challenges. Letting go of a low-production handmade performance car is even tougher, but after four years and lots of glorious engine noises, I’m ready to find a new owner for the DTM5, our 1993 BMW E34 M5 project car in Torrance, CA. Soon to be auctioned at BringaTrailer.com. 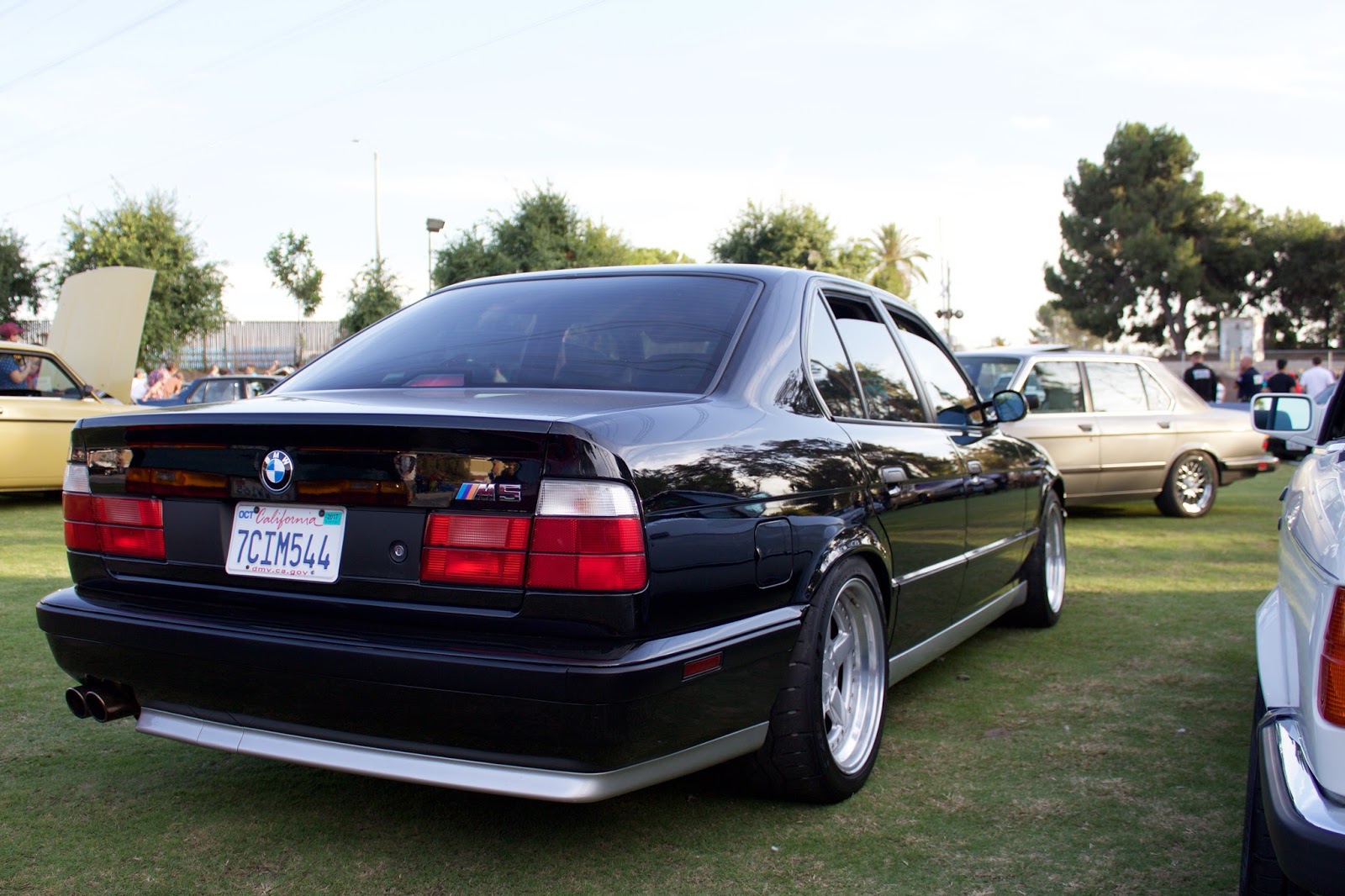 The M cars from this generation are really something special. While it’s true that the E34 M5 was the last of the hand-assembled M cars built at the Motorsport plant in Garching, Bavaria by two guys with mustaches called Karl and Hans (the guys, not the mustaches), that’s not what gets me excited. It’s the lopey, angry hive of hornets idle from the S38 inline six as soon as it’s fired up. It’s the snappy throttle response from the mechanical connection between your foot and the six individual throttle bodies feeding that engine. The experience is really enriched by that certain BMW leather interior smell, the black on black color scheme, and the sporty stance combined with three-piece period correct 5-spoke wheels. The compliments from other car nerds out on the streets come freely and often.

The M5 has a clean title in my name, with no accidents in its history, and no rust. This was a California car from new – I have records going back to 1993 and the original owner in Woodland Hills, CA. Several years ago the car was moved to Colorado for storage while my friend the previous owner was abroad, but it was brought back to California in 2013.

The M5 has original paint except for the front and rear bumpers, hood, and side skirts. The hood was repainted due to failing clear coat and the plastic parts repainted to restore the original two-tone color scheme, which had been blacked out by a previous owner. Cosmetically speaking, there are a few door dings on either side of the car which have been addressed by paintless dent removal, but which are still visible from certain angles. The rear quarter panels have some long shallow scratches as well. Rock chips from use still remain on the leading edges of the front fenders. Headlights are ellipsoid units from a 750iL, and tails are Hella OE Euro with clear turn signal lenses. A pair of US-spec original taillights with amber turn signals will be included. 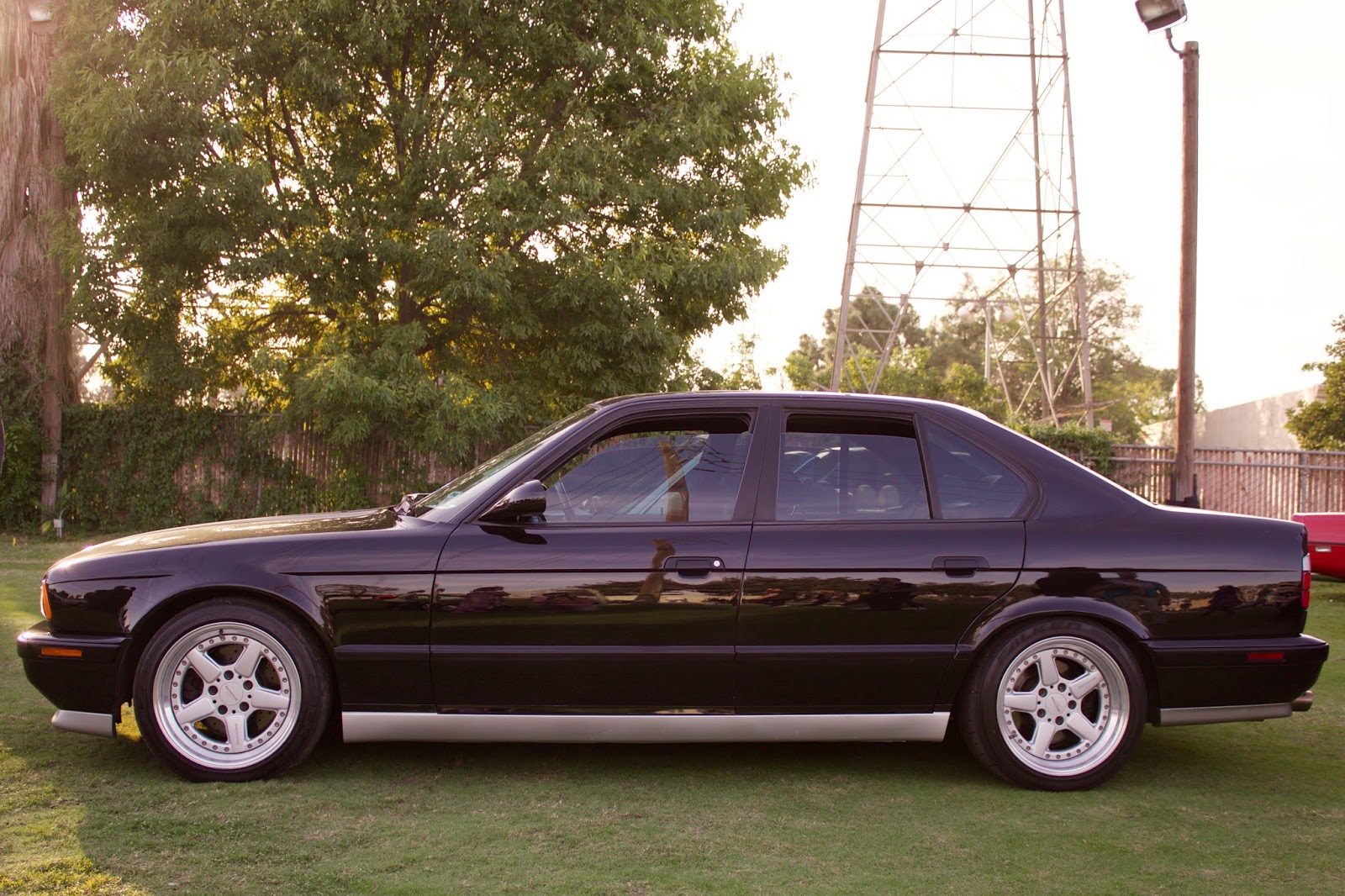 What makes a ’93 M5 special? For the 1993 model year, BMW decided to revise the E34 M5 a bit. This was the last year it was for sale on the US market, although production did continue on for two more years. For 1993 all of the exterior window trim was blacked out; Shadowline in BMW speak. The large rectangular side view mirrors were replaced with petite little streamlined numbers, and the front door handles are embossed with BMW Motorsport logos, and the lower trim was painted a different shade of silver. The interior was upgraded with black birdseye maple trim on the dash and door panels. Only 261 of these cars were sold in the US in 1993, making this somewhat of a rare beast. 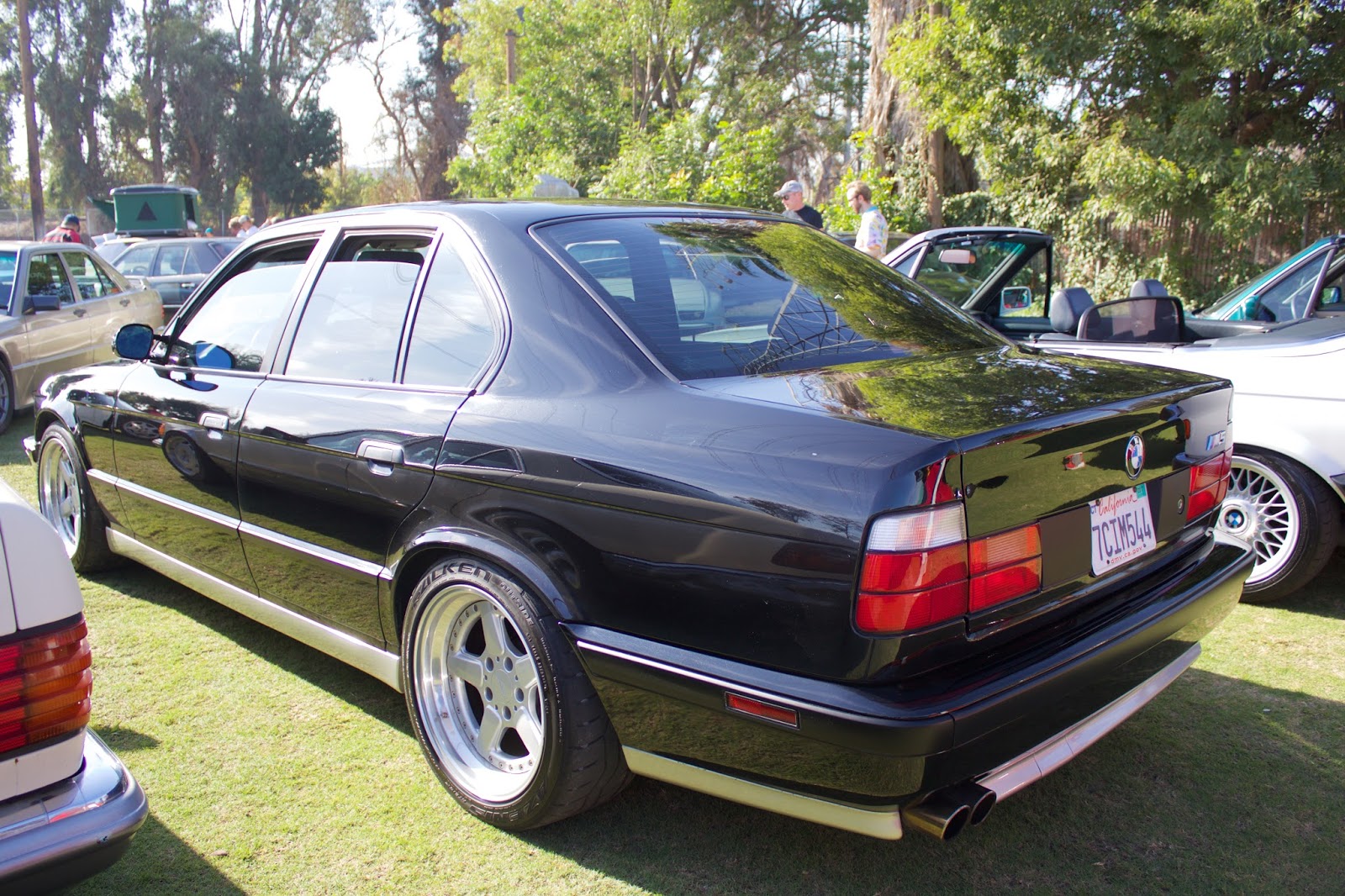 On our DTM5, the interior is all original black Nappa leather which is still soft and smells great. Window tint was replaced in 2014 with new 3M Color Stable film. There is some light wear on the driver’s seat bolsters but no cracks or foam issues. The dashboard is original and not cracked, although the 1993 only black birds-eye maple wood trim does have some surface cracks in the finish on the door panels. A previous owner installed a Nardi leather 14″ Steering wheel but the OE airbag wheel is also included. Also from a previous owner is an Alpine head unit with MBQuart speakers and JL Audio amplifier. The front Sport seats have full power adjustability function including power headrests. Everything currently works except for cruise control; I have not diagnosed the system. The single airbag system is disabled due to the steering wheel swap but all other components appear to still be in place. The shift knob is a new weighted ZHP piece which makes shifting a breeze, also thanks to the rebuild I did of the mechanism, with all new bushings. The 5-speed transmission will make noise going into 3rd & 4th gear if shifted too quickly. These Getrag 280s are notorious for being a bit cranky and although this one was presumably rebuilt, it needs some sympathy and a gentle touch from the driver to stay happy. 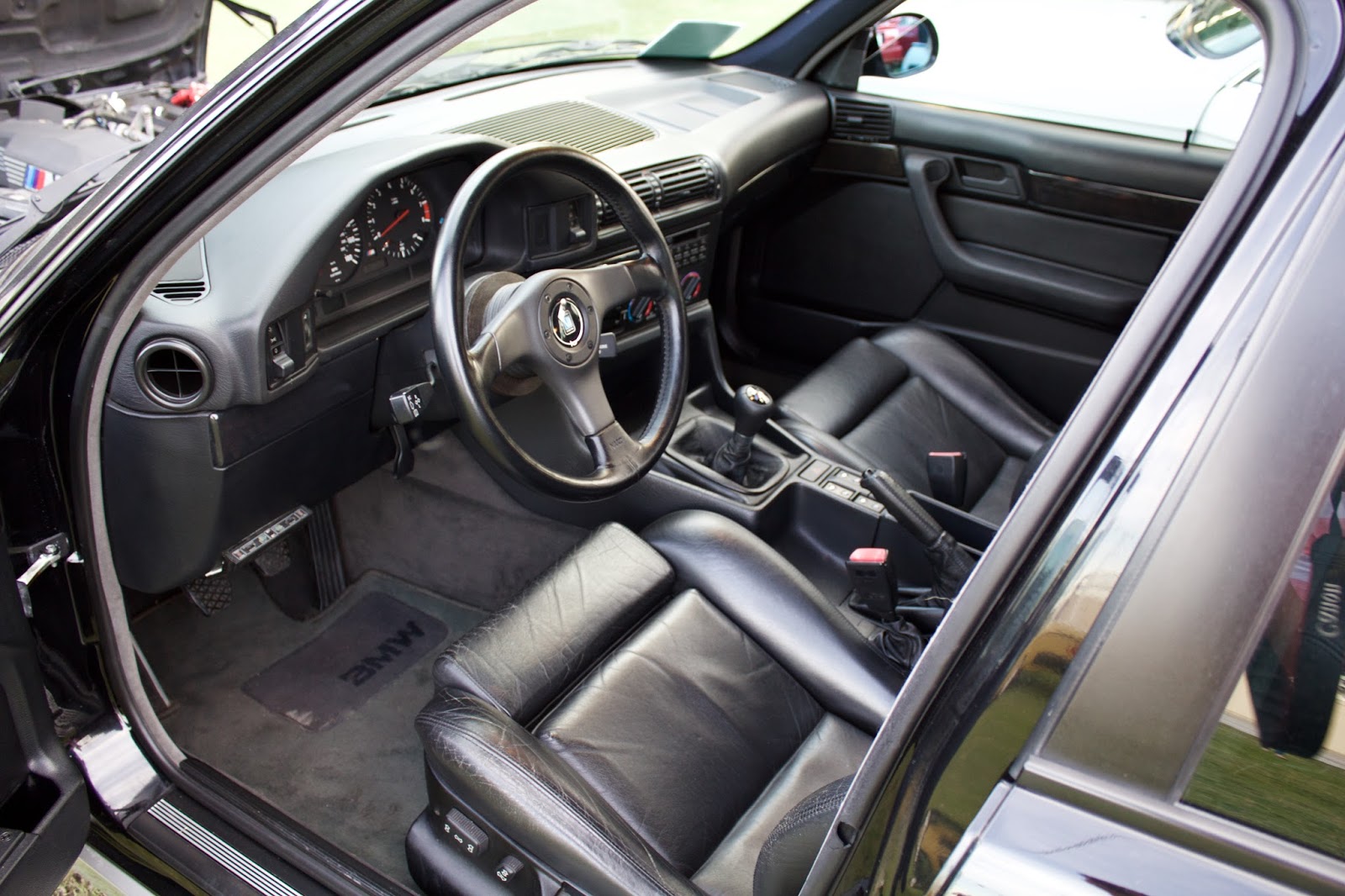 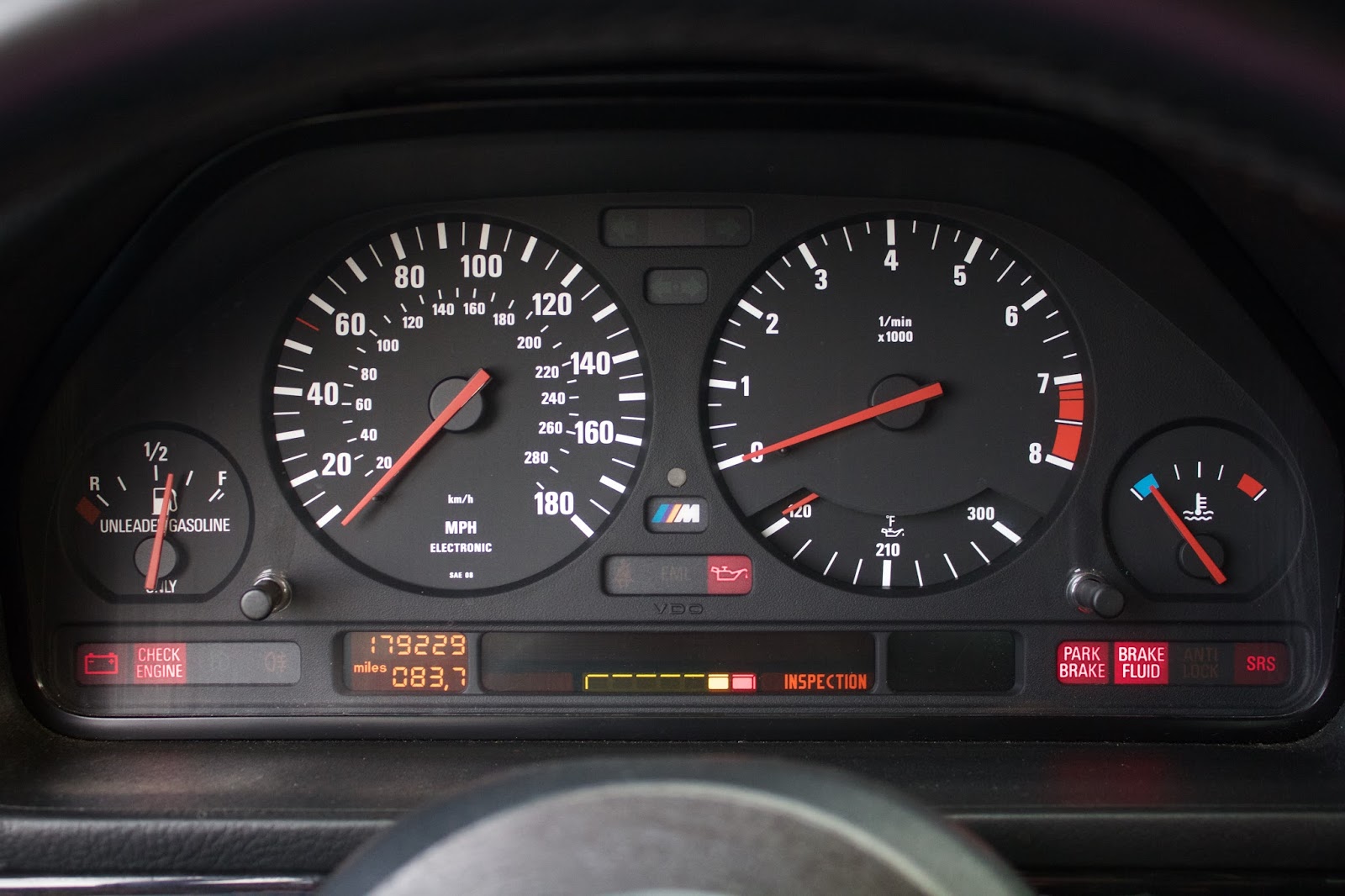 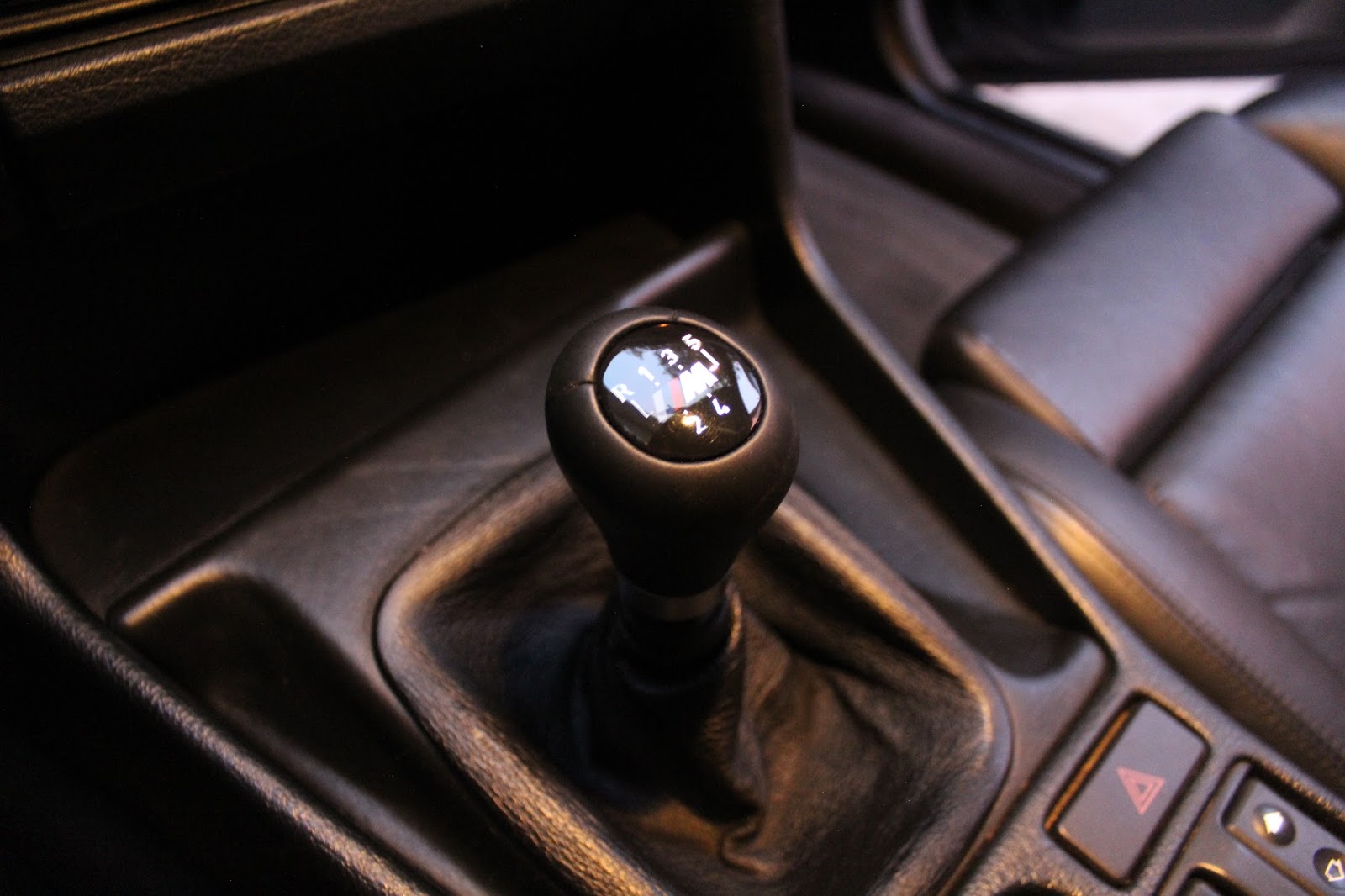 The original 3.6L S38B36 engine was fully rebuilt at 143k miles by a previous owner. There are 36k miles now on engine and 179k total on the car. Output was measured at 315 hp at the rear hubs on the Church Automotive dyno which works out to approximately 340 hp at the flywheel, so this engine makes essentially the same power as a larger 3.8L Euro version. The rebuild featured CP forged pistons with a design that gives 11:1 static compression, up from the 10:1 stock value. The bottom end was fully balanced, and the head received porting work and a 3-angle valve job. An MLS head gasket replaces the original. At the time of the rebuild, the individual throttle bodies were also rebuilt and synchronized. The previous owner / rebuilder used Dinan cam sprockets and an upgraded timing chain tensioner from a later M50 engine which is a common upgrade for the S38.

Currently the engine is running the stock BMW DME engine management system with a Superchips tune. Under part load and quick transitions there is sometimes an audible ping, running California-spec 91 octane gasoline. It will run to redline at full throttle with no problems. If the car remains in CA it may benefit from a slight re-tune to pull a bit of timing. In other states with higher octane premium fuel it may not be an issue. The ignition system is stock apart from aftermarket Moroso plug wires; the stock wire cover is included but would not fit over these larger wires. The airbox and intake manifold are stock with the variable length plenum system functioning as it should. On the exhaust side, this S38 retains its original stainless steel Motorsport tubular headers as equipped from the M factory, and the stock catalyst. Downstream it is fitted with a BBE Triflow 304 stainless steel cat back exhaust system with new hangers. I recently performed a compression test; results were great and are shown in the flickr photo album. 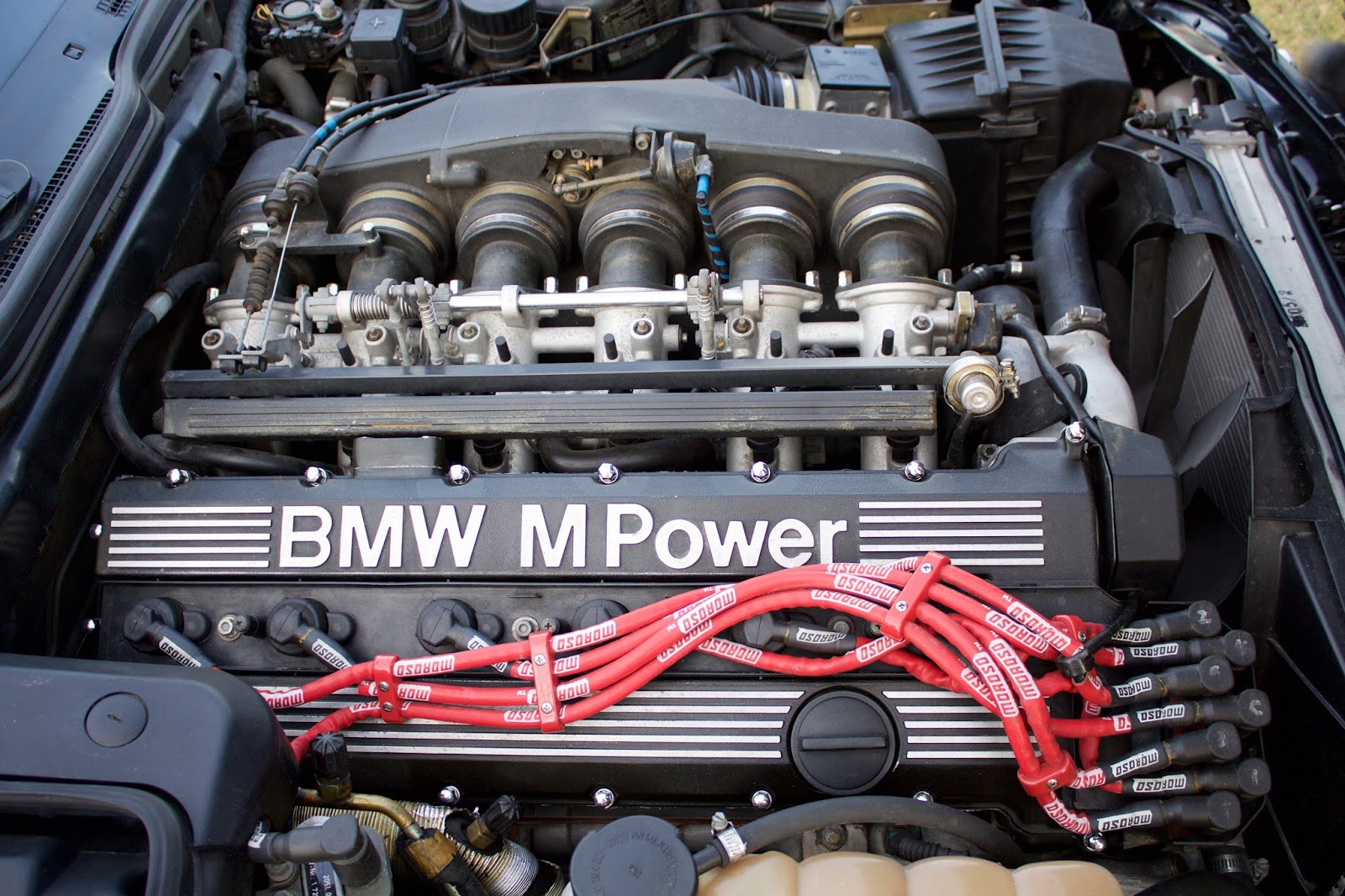 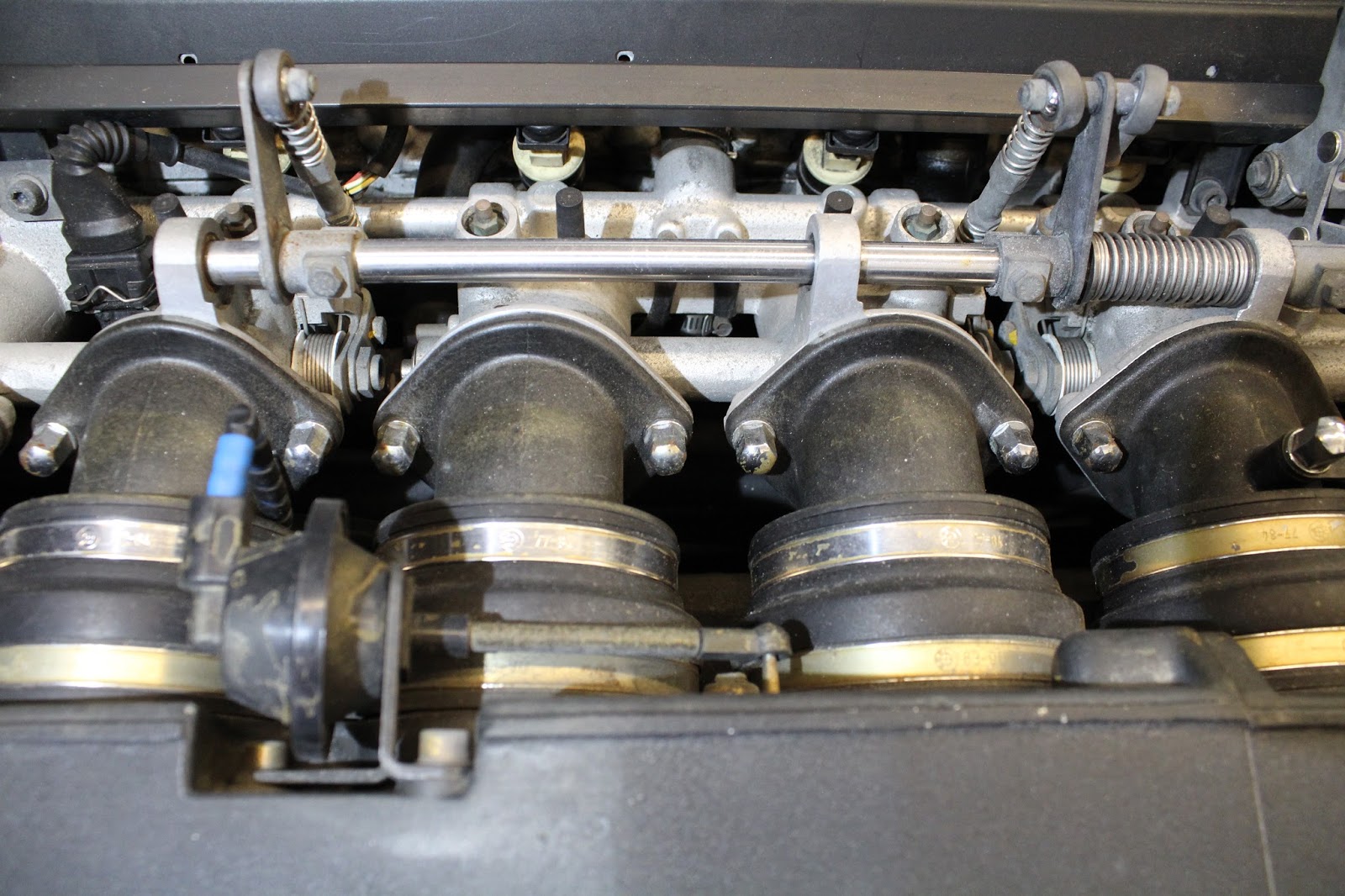 The suspension has been gone through with a Dinan Stage 2 kit and Koni Sport dampers. It was treated to a full suspension rebuild approximately 10k miles ago, and I have replaced all tie rods with new parts again this year after some wear was found. A 4-wheel alignment was performed at West End this year; the M5 features adjustable rear semi-trailing arms to set rear alignment. Though these cars had self-leveling rear suspension from the factory, a previous owner removed the special dampers when the Dinan kit was installed. I went a step further and completed the full SLS delete including removing the hydraulic pump pistons and all lines. The car has a recently rebuilt power steering box with Servotronic speed dependent assist. Wheels are AC Schnitzer Type II; 17 x 8.5″ front and wider 17 x 9.5″ in the rear. These are German 3-piece wheels with titanium bolts and were installed NOS about 10 years ago. Tires are Falken Azenis RT615K with widths of 225 front, 255 rear, and less than 3000 miles of use. Brakes are stock apart from Brembo drilled front rotors and ATE Super Blue fluid. 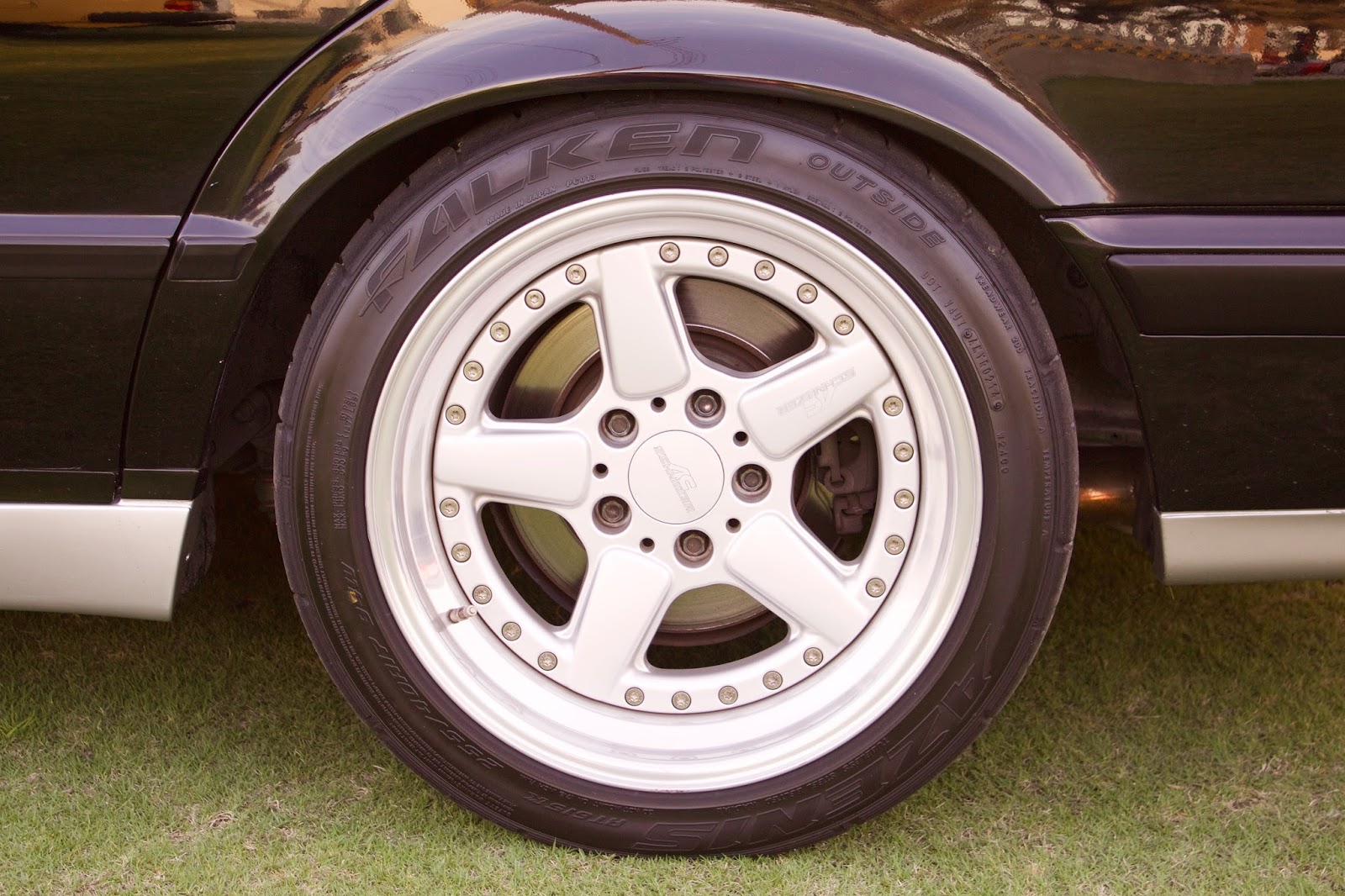 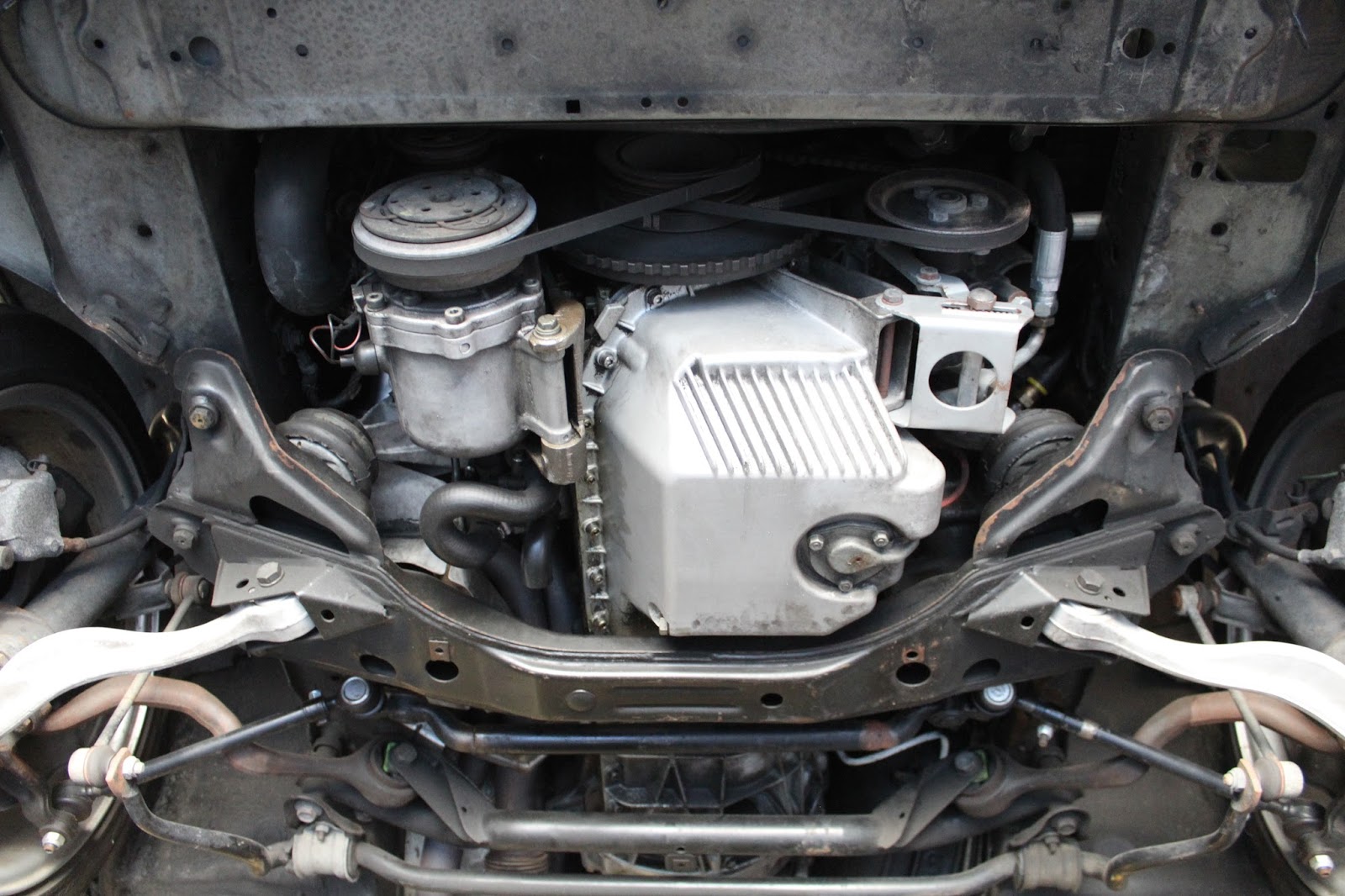 During my ownership the following maintenance and repair jobs have been performed:

I have several boxes of spare parts that will be included, such as spare gaskets, seals, the SLS parts that were removed, the original steering wheel and spark plug wire cover, a clean set of US-spec taillights, plastic trim parts, clips, and fasteners. Also included will be a Bentley E34 service manual and a Bavarian Autosport “ultimate” car cover. I purchased a new coolant surge tank but have not yet replaced it; this can be done before sale if the buyer wishes. 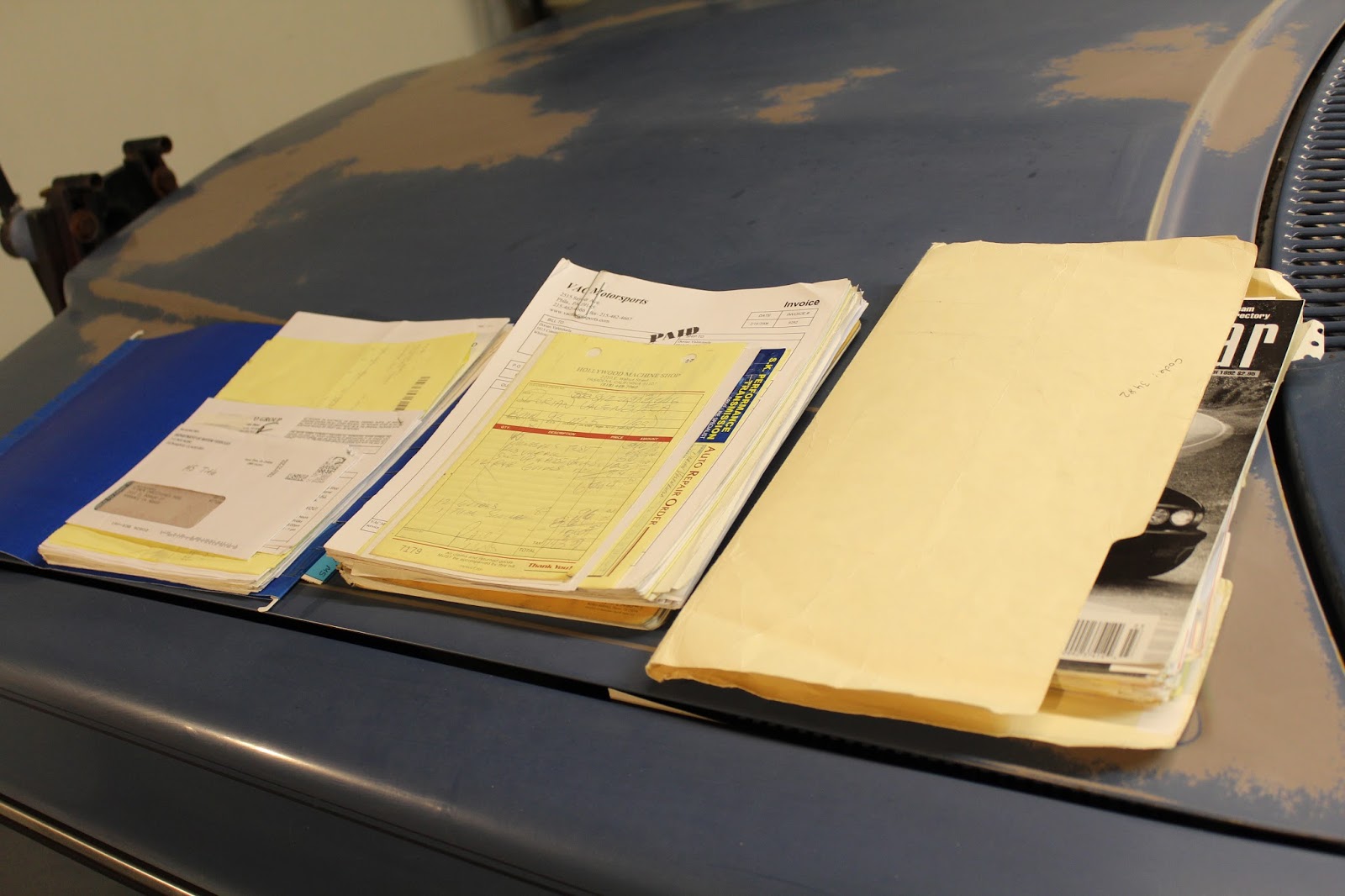 Documentation for this M5 is extensive. Receipts cover recent work, the suspension rebuild, full engine rebuild and subsequent work, and Dinan suspension installation in 2001 including many articles about Dinan equipped BMWs. Receipts even go all the way back to dealer service writeups from 1993 where the original owner complained that “DRIVERS INFO DISPLAY DOES NOT DISPLAY COMPLETE NAME/PHONE# FOR CELLULAR USAGE” (no crap, it’s a tiny 7-character LCD screen) and the best one, “CUSTOMER STATES PHONE OPERATION GOES FUZZY WHEN HONKING HORN” – I can’t make this stuff up! That phone has been long removed, but the original K40 radar detector is still installed and beeping, if you’re a fan of early ’90s digital automotive accessories.

The full album of 230 photos is here on flickr and includes engine, undercarriage, interior, and documentation shots.

All DT articles can be found using the search label DTM5, but here’s a handy list as well:

If you’re interested, please head over to Bring a Trailer for the auction in the next few days. 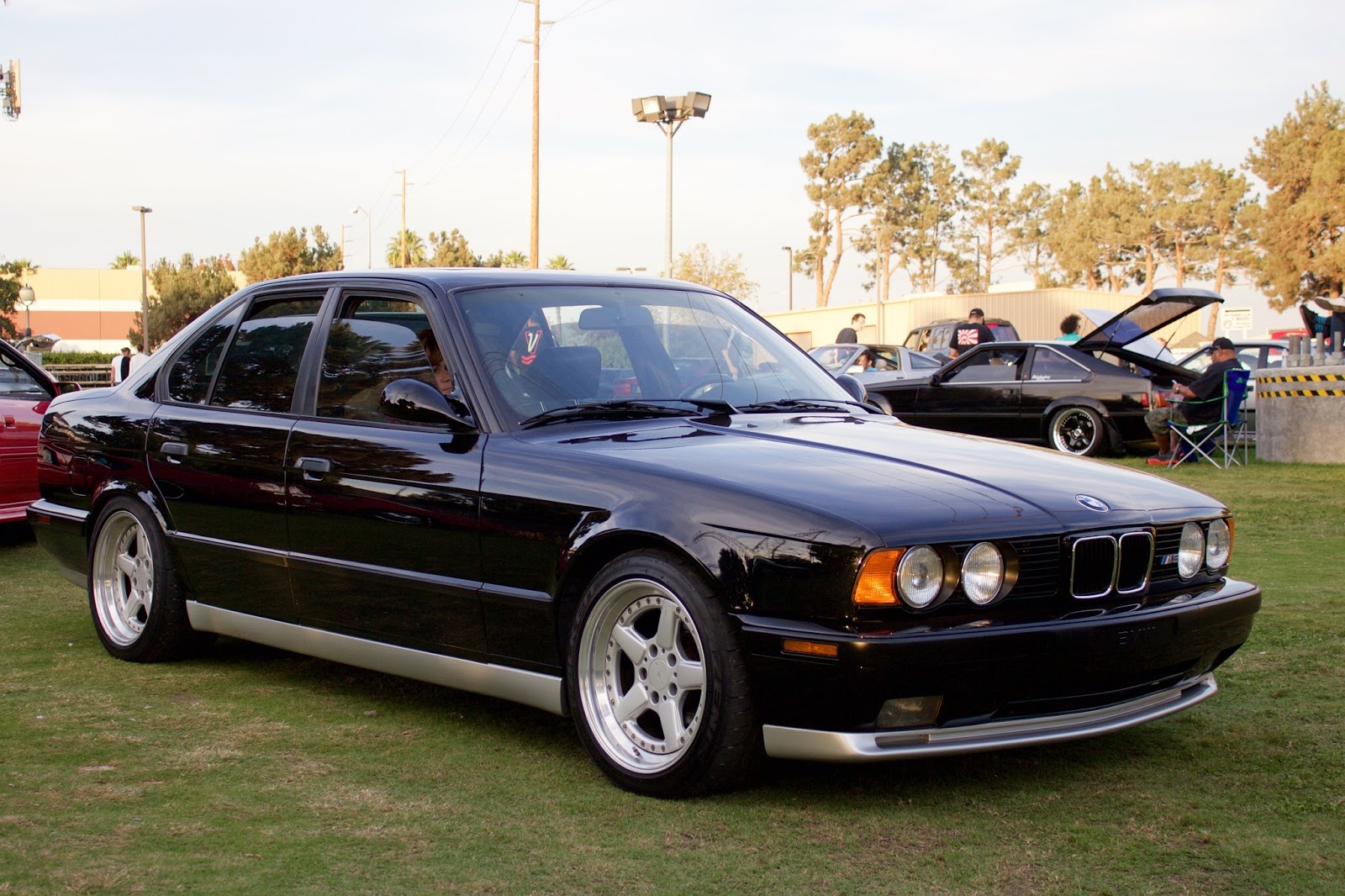 CFlo is Daily Turismo’s co-founder and Technical Editor. Recently he’s been working on a few Fords and Volvos, but BMWs are never more than a wrench’s throw away.