The ancient Chinese philosopher Sun Tzu said a lot of things…but my top three have to be (1) “All warfare is based on deception.” (2) “Pretend inferiority and encourage his arrogance.” and (3) ” It is better to drive Porsche with fake luggage engine cover that goes like a scalded cat than Porsche that handles like a Cadillac.” Those ancient Chinese philosophers sure said some wacky stuff, but it sure makes a good t-shirt. Find this 1981 Porsche 911 here on eBay with Cadillac V8 bidding for $15,000 reserve-not-met with 9 days to go, located in Corona del Mar, CA. Tip from Rod S. 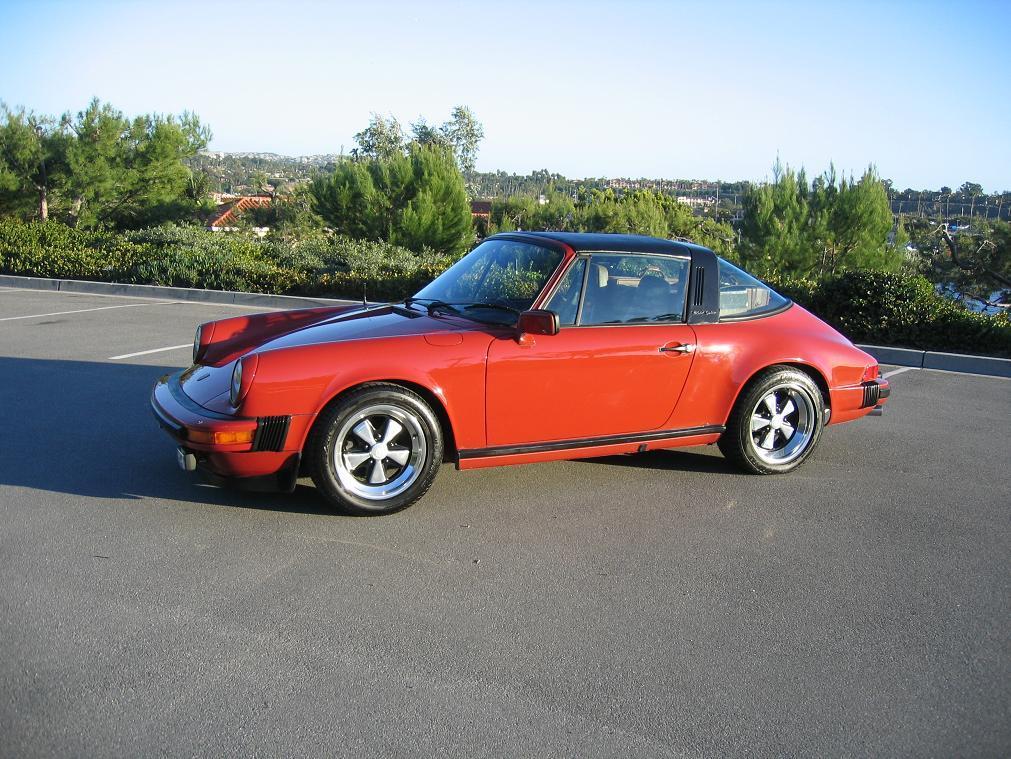 Behind the driver’s seat is something that looks like a pile of leather luggage, but is in fact an engine cover for an 8.1 litre V8 from 1970 Cadillac Eldorado that has sweet custom “Porsche” engraved valve covers and is mated to a TurboHydramatic transmission equipped with a switch-pitch stall converter. 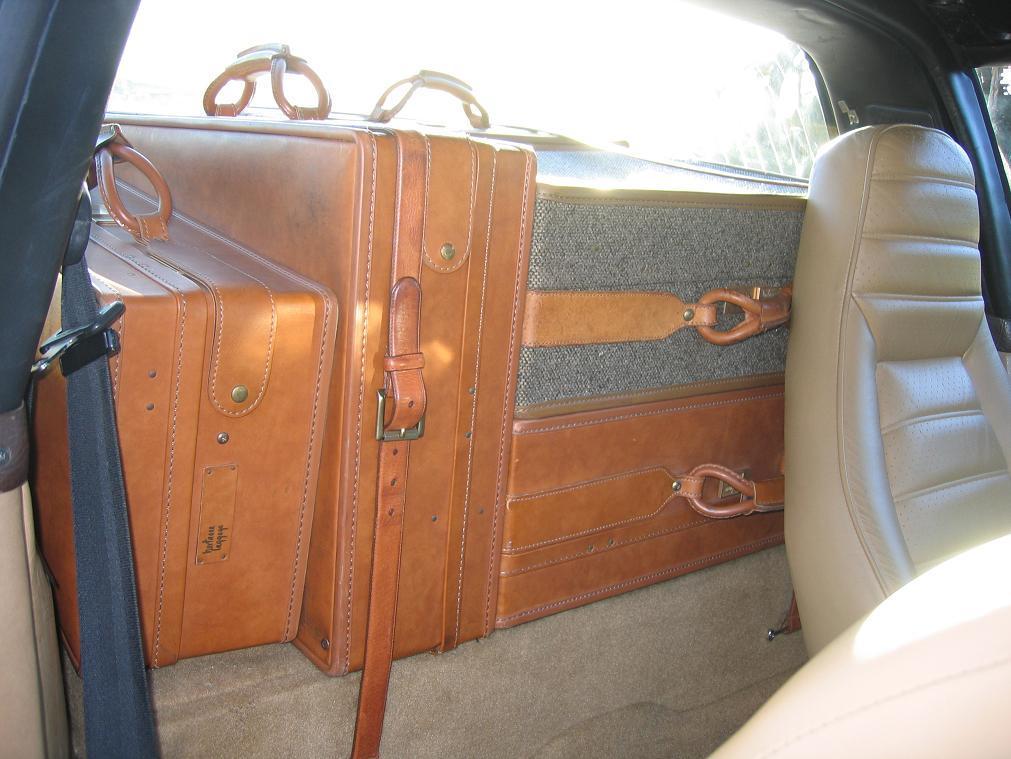 When I was 15 years old in 1972 I read about this type of engine transplant written up in “Peterson’s Complete Book of Engine Swapping No. 2” and always thought is was a very clever idea. That write-up was for an Olds 425 V8 into a Porsche 912. That book had been sitting on my shelf for years and when I reached 45 the itch was just to great to resist and I decided to build my own.

This engine swap is actually very easy to do. I used a 1970 Cadillac Eldorado 500 cid engine and TurboHydramatic 425 transaxle. The assembly is just as Cadillac designed it. After removing the Porsche engine & transaxle it was simply matter of building motor mounts, CV joint adapters and axles, a custom radiator and exhaust system. The Cadillac package has a single front and dual rear mount setup that was easily adaptable to the stock Porsche mounts.

Fitting the package in

The Porsche shock tower crossmember and sheetmetal behind the rear seat had to be removed. I chose a Targa body because of the extra unibody rigidty provided to help when this sheetmetal was removed. The body is still surprisingly stiff. When I was building the car onlookers swore that the back window would pop out and the chassis would twist. But it is all still nice and stiff.

When the final drive & axles arealigned properly with the rear wheels the powerplant is located perfectly fore/aft…..almost like Dr. P and Cadillac had planned for this swap to happen. The engine fits low in the back seat area as can be seen in the photos. The engine is a 1970 Cadillac 500 cid block specially built for me by Maximum Torque Specialties of Wisconsin. They are/were THE performance Cadillac engine builder. The engine has been slightly bored, decked, and fully balanced. Forged rods and pistons are used, the very expensive Bulldog aluminum heads, pretty healthy cam with roller rockers and a specially designed valve train. Roller timing gear & chain, high flow oil pump, and lots of other goodies went into building this engine. It pulled 537 +/- hp on the dyno. It idles a little rough and gives this Porsche a very suspicious sound! To keep engine area temperatures low we ceramic costed the exhaust manifolds in and out to direct exhaust gas heat out the tailpipe. The stock manifolds to keep it quieter under the luggage (since the engine is literally right behind you). A high torque starter, remote oil filter, Holley spread-bore double pump carb and some billet goodies were also added.

When you pull that luggage off and your onlookers see those “Porsche 8.2 Litre” valve covers you’ll grin with delight at their complete bewilderment. 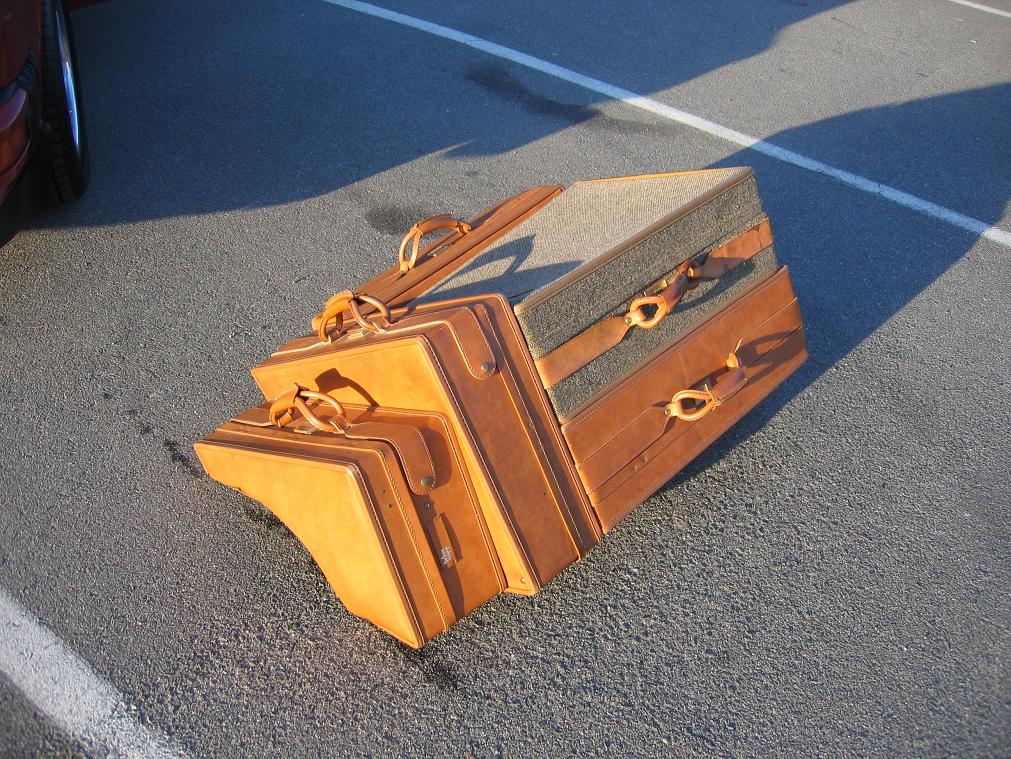 There are only a few people that know about these TurboHydrmatic 425 Automatic transmissions. They are essentially a TurboHydramatic 400 with reverse rotation and a different valve body. These transmission were used in GMC motor homes and so there is tremendous strength and great aftermarket parts are available. This transmission was built to heavy motor home specs, has a Trans-Go Shift kit, and is the VERY SPECIAL Switch-Pitch torque converter system. For those of you not familiar, applying a 12V signal to a transmission terminal changes the converter from low stall to high stall. This gives great hi-stall off the line performance and exceptional pull with it switches back to low stall. For more info just email me. I also have an aftermarket Switch-Pitch transmission controller that I have not installed and does with the car.

I used a 2:73:1 final drive. I tried a 3:17 ratio but the engine just revved too high at cruising speeds. With the huge torque of this motor and the dual range torque convertor the 2:73 gears are great.

In terms of getting the power to the rear tires, I have used Turbo Carrera CV joints because they are stronger and also allow the greater axle shaft angles (because the axles are shorter then stock). Axles were custom built by Dutchman Motorsports in Portland, OR according to the torsional moment strength specs I provided. To carry the extra weight I’ve installed 30mm torsion bars. The ride is great and the car sits very nicely.

Note the wheels are 7’s in front and 8’s in the rear. These are the largest size stock Porsche rims and tires that fit this car properly and all are brand new (and were expensive).

After removing the shock tower and rear seat sheetmetal the engine just lifts up from below. I use the stock Porsche corner engine mount structure in the back with different biscuits. The custom front mount is welded to the torsion bar tube. 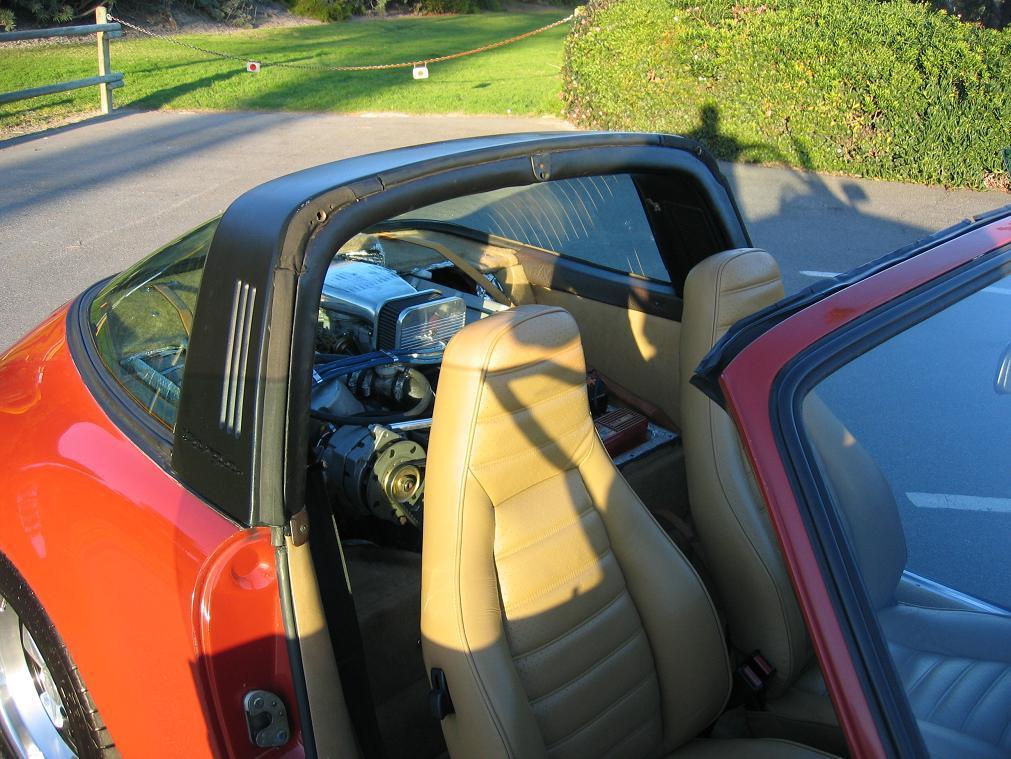 I tested three exhaust systems and have settled on a MagnaFlow dual in, dual out muffler mounted in the typical Porsche location. 2.5″ pipes are used. There is NO “humming” effect (Flowmasters sounded the worst). For heat control I use ceramic coated stock exhaust manifolds. Certainly headers were considered BUT because the engine is so close to the interior I think the noise would be unpleasant. Besides….the power and torque is pretty insane anyway and I like the “sleeper” design.

Engine cooling is handled by a specially designed aluminum dual cross flow radiator. This radiator also contains a transmission cooler and uses two VERY high capacity fans. A high capacity water pump was also used. After installation of a large oil cooler up front with a temperature switch the car is staying cool at all times in stop & go and light freeway driving here in Southern California during 75 to 90 degree weather.

What everyone loves is the leather Hartman luggage engine cover. I purchased used Hartman luggage on ebay and my fantastic interior guys (Roberto’s Auto Trim in Costa Mesa, CA) figured out how to cut, hollow and attached the luggage to make the cover. The inside of the cover uses marine “SoundStop” engine room insulation to keep the passenger compartment quiet and cool.

The tachometer was recalibrated for an eight cylinder pulse and the MSD tach adapter makes it all work just great. The oil pressure, water temperature, and associated idiot lights all work as well. The speedometer is not hooked up yet…..I have a really clever commercially made adapter that coverts the mechanical Hydramatic speedo drive to an electronic pulse.

Shifting is handled by a common Lokar automatic shifter and shifter cable. It mounts right where the Porsche shifter does and looks totally stock.

I’ve had the seats redone and all of the interior carpet replaced. The interior is near immaculate.

Since the original Porsche works off the air cooling it was removed and no heater is installed. This is not a cold states car….drive this custom beauty in nice weather please.

This project turned out just terrific. The power plant package fits just great, it’s a total sleeper, and people just can’t believe it can be true. I’ve held onto the car for all these years because it is so unique. Well its time to move on. I’ve owned 75+ classic & special interest cars and now am turning my time to family, travel, outdoors and boating. The buyer will be getting something that will turn heads everywhere and appreciate the well thought out design and execution of the build. 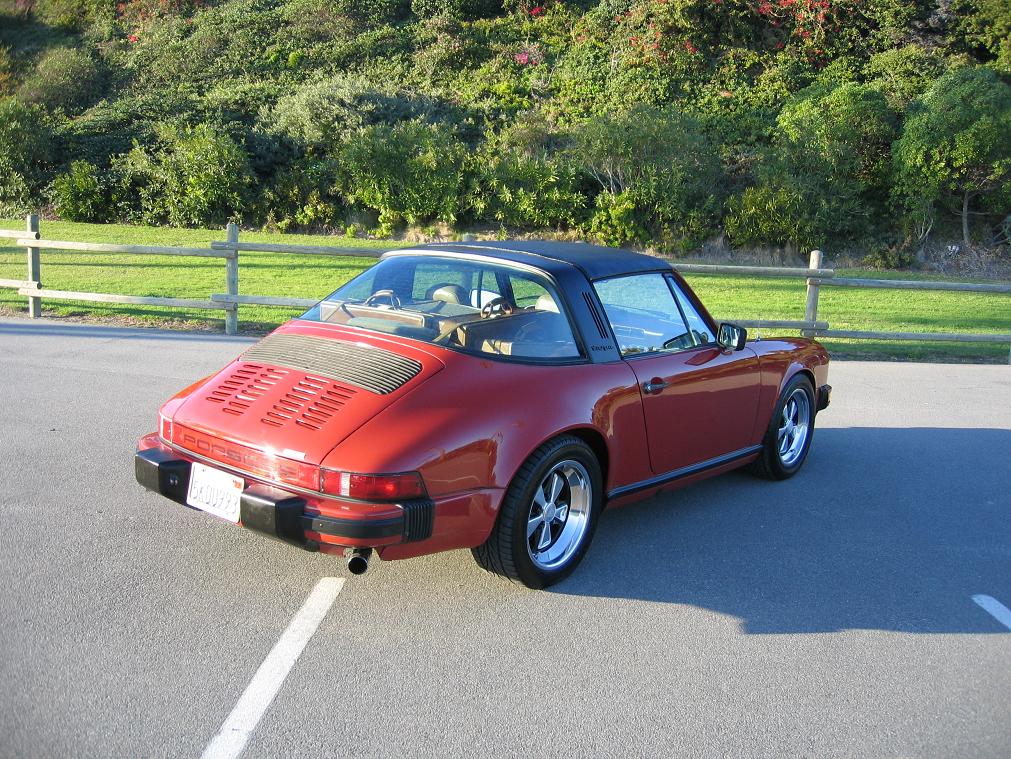