The Cobalt was the replacement for Chevy’s miserable sub-rental car quality compact Cavalier and was offered in basic-junk LS trim or front tire melting SS trim. The nuts who build turbocharged fire breathing 7 second front wheel drive Pontiac Sunfires got hold of a 2005 Chevy Cobalt and used it develop a tire warming turbo kit.  Most development cars of this type are driven into the ground, stripped of anything valuable and turned into recycled tuna cans, but we’ve found one that
escaped all of those fates and is being offered to the public now for
the first time. It’s the Garrett Turbo Chevy Cobalt, the car used for
developing Garrett by Honeywell’s turbo retrofit kit for the naturally
aspirated sport compact. This thing packs a wallop, has a cool history
and less than 20k miles on the clock. It’s going on ebay in the next few
days but the seller contacted Daily Turismo for an exclusive preview. 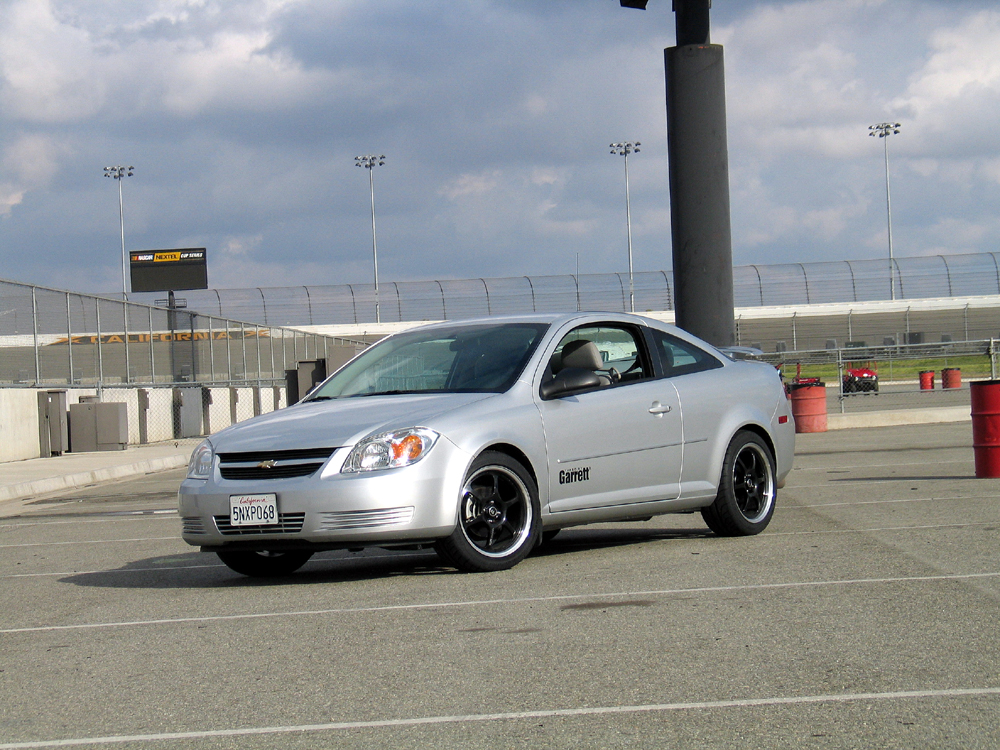 It’s
not often that an engineering development mule vehicle from a legitimate company comes up for sale to the public,
but these vehicles represent a peek into the world of automotive
engineering and can be a great value to someone looking for an
interesting car.  This
Cobalt started life as a 2005 LS model, a basic two-door economy coupe
with a 2.2 liter four cylinder engine and a 5-speed manual trans driving
the front wheels. It still looks pretty unassuming to the casual
observer and has not been “riced out,” wrapped in vinyl or stripped and
caged. 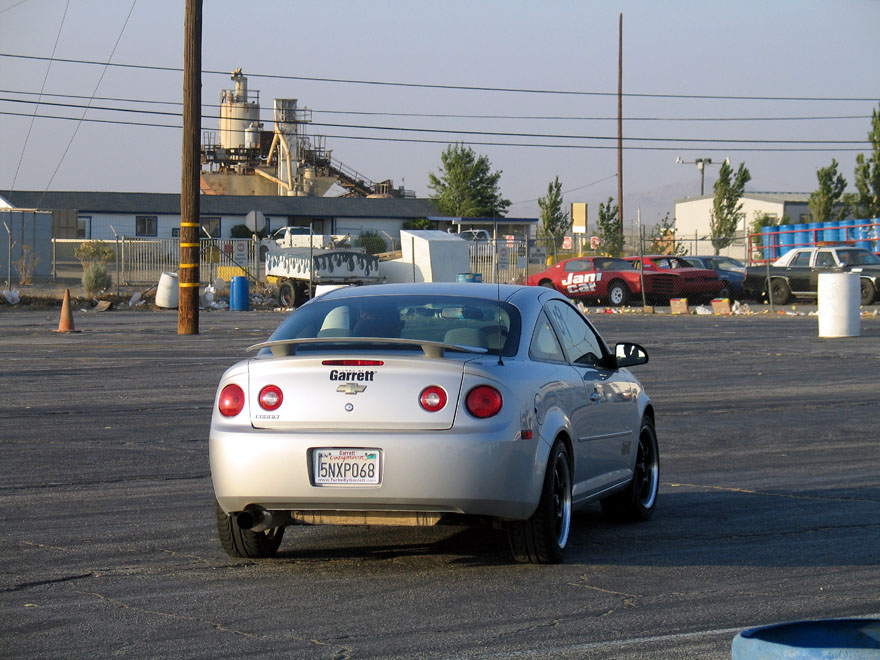 Sure,
it looks like any boring rental car from the outside except for the
slightly lowered stance, Motegi wheels and the black Turbo by Garrett
stickers. But to us, that’s part of the appeal; this is a sleeper in the
best sense because no one expects a silver rental car to have big huge
balls and put a smile on their face at every opportunity. 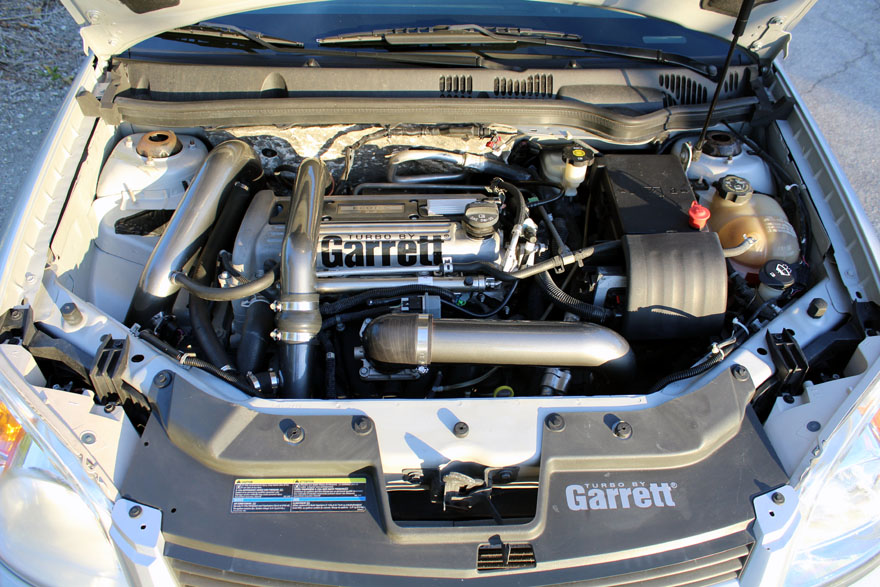 The
source of said smiles (and balls) is all under the hood – the Garrett
turbo kit features a GT2860RS “Disco Potato” turbo, which provides
nearly instant spoolup with its low inertia and dual ball bearing
design. It lives behind the engine on the exhaust side, with an internally wastegated 0.64 A/R turbine housing, unique cast manifold and
downpipe created by Garrett for this engine. Driving the Cobalt is
an experience similar to trying to ride a cheetah. It’s docile
and well behaved for simple cruising, but give it the spurs and it tries
to kill you.  Seriously, this author has driven this car and can report that it seems docile and that all things are well until you decide to give it some boot…and then all hell breaks loose. 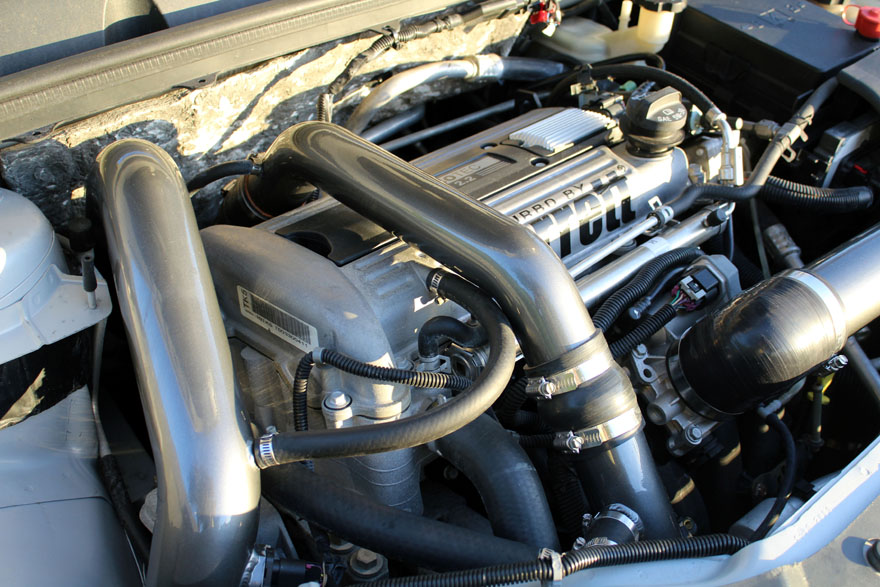 The
myriad tubes required to plumb fresh air to and from the turbo are,
from the left: the pre-turbo intake from the air filter, the post-turbo
charge tube running over the valve cover and down to the intercooler,
and the post-intercooler duct feeding the throttle body through a
90-degree silicone elbow. All are very clean looking mandrel bent
aluminum, formed and powdercoated by AEM. This kit was really an OE
quality level project for Garrett and it shows in the details. 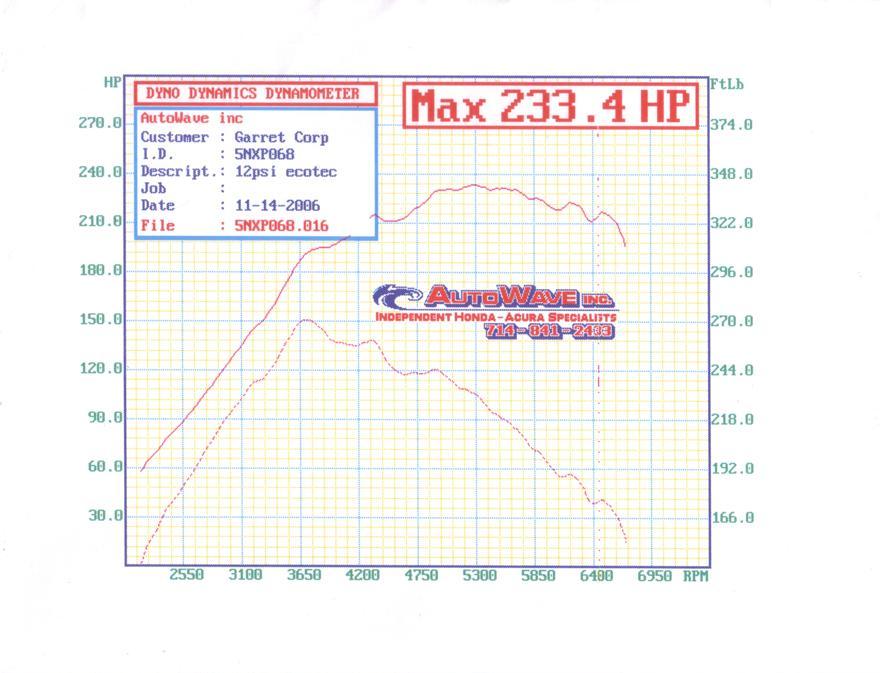 Needless
to say this Ecotec makes quite a bit more power than stock. Garrett had
the car dynoed at AutoWave, Inc. in Huntington Beach before and after
the kit install. Stock, it made 143 hp to the wheels. After the turbo
kit, fueling upgrades and tuning, it put down an impressive 233 hp @5300
rpm, and 270 lb-ft of torque at a moderate 12 psi boost pressure. We
believe this measurement was made with the catalytic converter installed
and rumor is that it made closer to 250 whp with a test pipe installed.
The powerband is fat in the midrange which makes for a car that feels
faster than it is when you whack the throttle open suddenly. Bam! 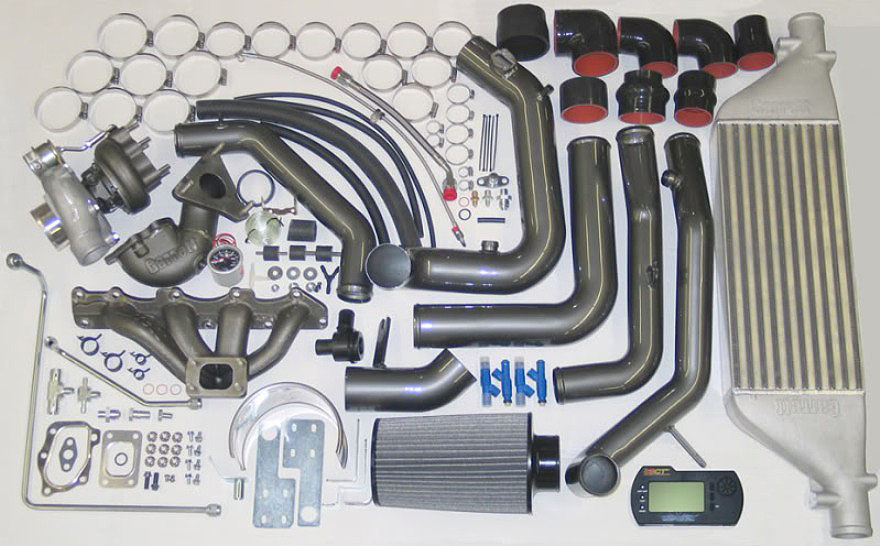 The
current owner received the
technical data and kit images when he purchased the car from an internal company auction and we are happy to share
them with you. Here we see the kit components laid out for a marketing
image; the compact ball bearing turbo is visible at left along with all
of the bespoke parts created for this specific kit. That includes
Garrett logo cast manifold and downpipe, a stainless heat shield, custom
water and oil lines for the turbo, the AEM charge plumbing, SCT
performance reflash tuner for the ECU, custom intercooler with Garrett
logo end-tanks, and all gaskets and hardware. The fuel injectors and air
filter are upgrades as well. 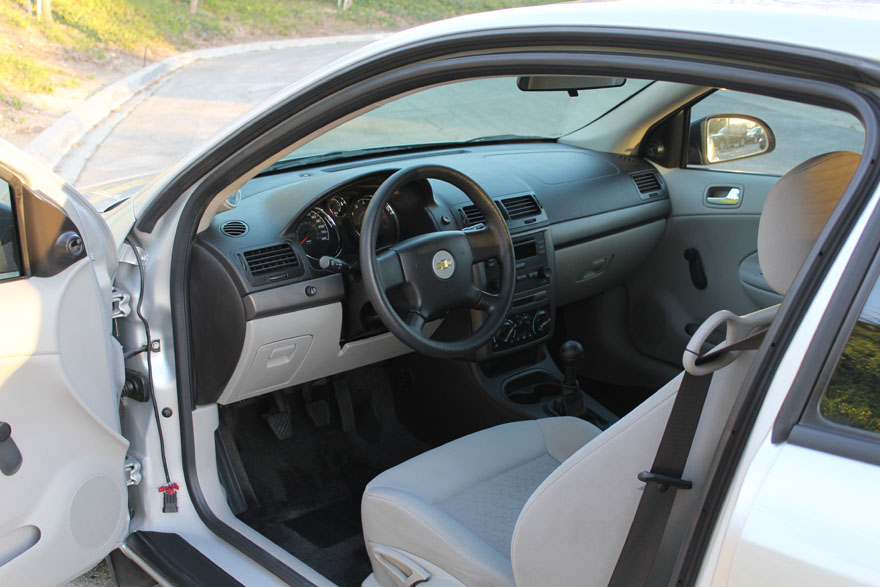 Inside
the car looks just about like any other 2005 non-SS Cobalt. Gray cloth
and GM plastics abound – but it’s clean in here and can still function
perfectly as a daily driver. Everything is as stock except for the turbo
speed sensor wiring harness visible in the door jamb, and the boost
gauge installed in the A-pillar. 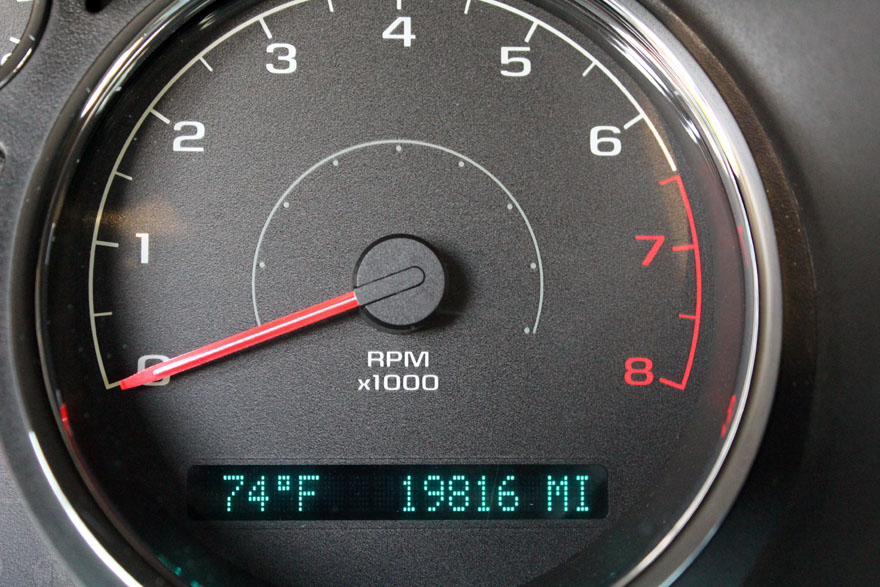 This
little force-fed baby has less than 20k miles on the clock; we’d bet it
has many more years of fun to give to the next owner. It was driven
only around 13k miles as a turbo development car, and the current
private owner has driven only 6k miles in the last three years. 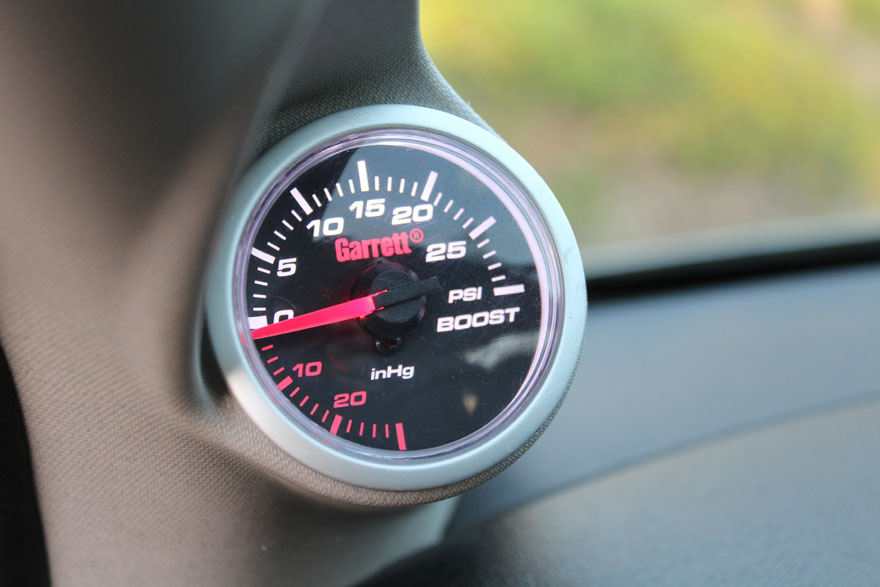 The
boost gauge looks great with the red Garrett logo and LED backlighting.
It’s also refreshing to see it installed in an OEM a-pillar pod mount
and not hacked into the dash haphazardly like we see with so many other
cheap, fun sport compacts. 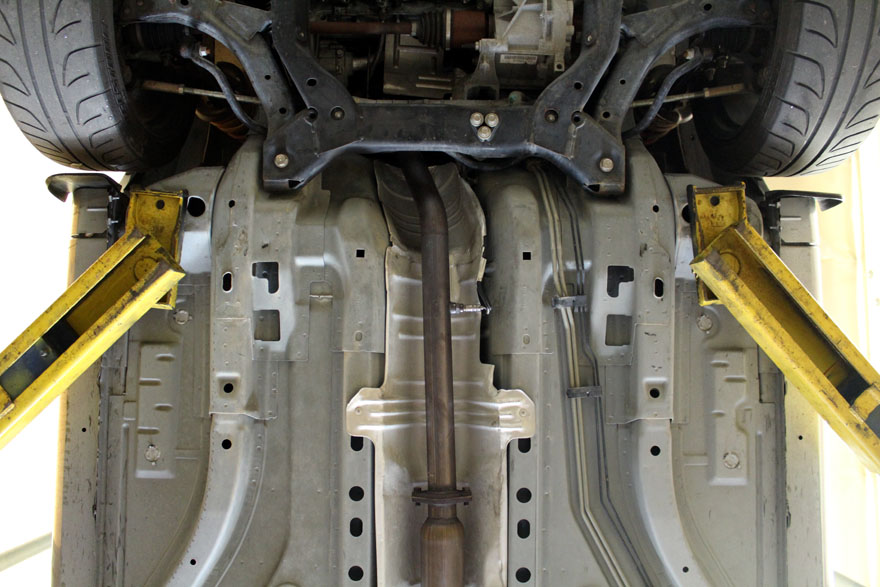 The
seller provides great shots of the underside with the car on a lift. We
can see that this is a California car for sure…it has lived in Southern California since new and it shows via the lack of
rust or grime. The body looks clean and straight with no visible
damage. We also don’t see a catalytic converter but the test pipe can be
removed and a stock cat installed if this needs to be smogged by the
new owner. The DC Sports stainless exhaust system fits like stock and
looks sharp. 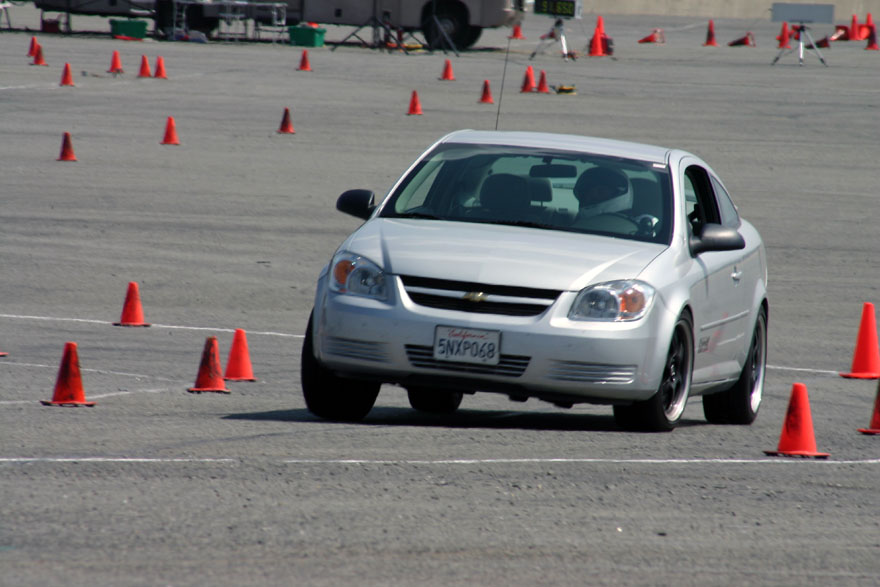 As
a test vehicle this Cobalt saw a lot of varied action; from regular
driving to spirited excursions to autocross events, track days at
Buttonwillow and Willow Springs raceways to evaluate the boost response
and power delivery, and trips to the now-defunct LACR (LA County
Raceway) drag strip to get an idea of straight-line performance.  It actually handles turns quite well, and loves a bit of mid-corner trailing throttle oversteer; just hit the tire spinning pedal on the right if you want to correct. 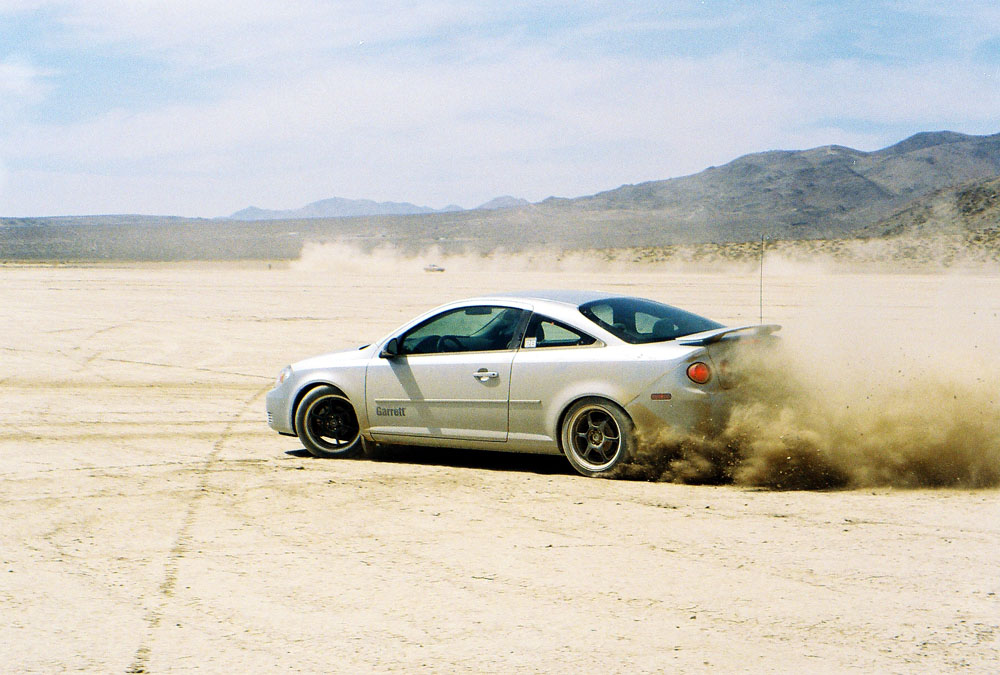 It
even saw some dry-lake testing out in the Johnson Valley area at a
rallycross event. A dry lake is the  perfect test bed (no pun intended)
for a powerful car given the flat, wide-open expanses of space. The
problem would seem to be getting traction on the loose surface, but hey –
this looks like a ton of fun to us! We
can see this Cobalt wore its dust with pride, but rest assured it has
been thoroughly cleaned since then and will be spankin’ fresh for the
new owner. We will update our DT readers when the auction goes live on
ebay, so stay tuned for your chance to bid on this unique piece of
engineering hardware that just happens to be a blast to drive. 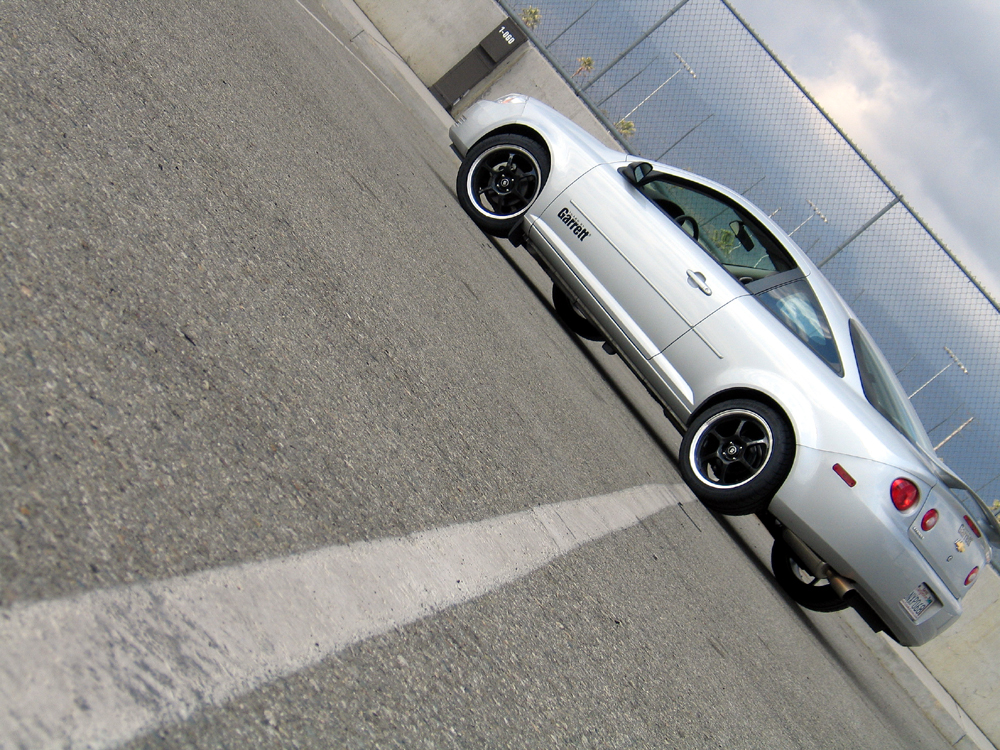