Do you enjoy the style of a wide brim straw hat all year around? Do you love thumbing through pages of mind numbing arbitrary rules, or making sense of the minutes of a meeting populated by ornery cantankerous curmudgeons? Do you enjoy weighing a collection of 100 lug nuts to find the lightest ones and then lodging formal complaint against your competition, accusing them of using their Pirelli connections to get illegal tires?  If you answered yes to any of those questions, you might be ready for SCCA Solo II autocross. Better yet, if your relish the thrill of spending three days towing a “race” car to some godforsaken hell hole like Toledo or Wichita, and then standing in the hot sun for 4 days just to race for 40 seconds for the remote chance of being lucky enough to win some Taiwanese made jacket…then this next thing might be your ticket to jacket heaven.  Find this 1990 Mazda Miata 20B 3-Rotor offered for $12,000 in Bentonville, AR via craigslist.  Tip from Vance. 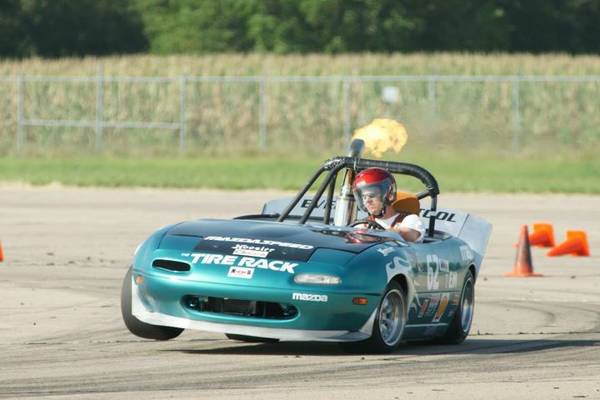 If you show up at SCCA National event in the typical hot rod MX-5, you have about as much chance of standing on the podium in E-Mod as Amy Schumer does at winning the Miss Universe pageant.  Autocross is an entirely different animal than the average track day, and the E Modified class is where all of the lunatic machines that cannot be otherwise classified end up — tube frame Corvettes running 2-speed transmissions, rotary powered bug eyed Sprite that seems to have a digital throttle, and today’s flame shooting out of its exhaust stack Miata. 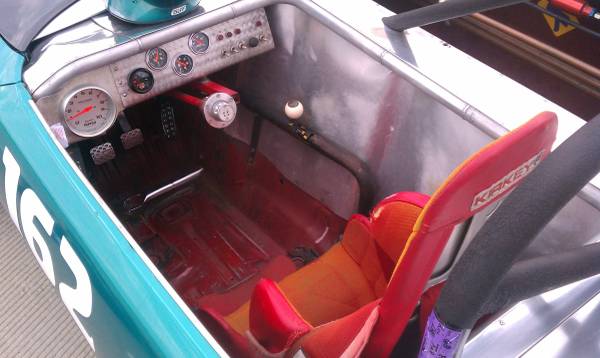 The thing about autocrossers is that they do weird stuff to bend the rules go fast.  I knew a guy who had a single cab F-150 specifically because, with the engine idling and the heater running it would get to pizza oven temperatures inside (higher than any other car he tested…yes…tested), and while technically, you are banned from using tire warmers, nothing stops you from storing them inside your pickup during the middle of the day with the heater cranked to thermonuclear.  Never mind the welding gloves he had to use to hold the wheels while mounting them minutes before his run, a tenth of a second is a tenth of a second.  Keep that in mind when you look at the creature comforts of a properly prepared E-Mod car, because everything is there to go faster — you are lucky to have a seat belt. 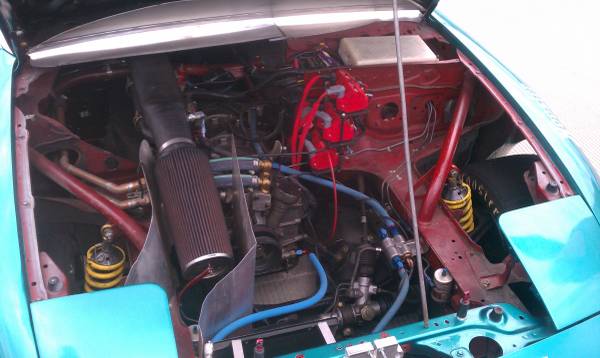 This is no ordinary MX-5 on steroids, this is the Predator that beat the Terminator in best 3 out of 5 and is now hunting Godzilla for sport.  The nuclear tipped Tomahawk at the knife fight here is a Mazda 20B 3-rotor that is polished, ported, and prepared to push out 400 horsepower running on methane and the tears of Regional losers.  It is mounted somewhere next to the driver’s feet and puts power to the rear wheels via a 2-speed Powerglide automatic, which is the most efficient (but less apparent) way to channel 400 hp to the rear of a car when racing speeds are restricted between 30 and 80mph.  Enjoy this video of (what I believe is) the monster racing in 2006. 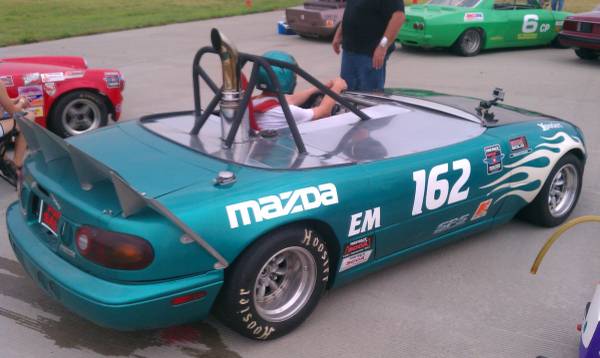 See a better way to get your E-Mod fix? tips@dailyturismo.com