Ever since I got to get close/personal with Ford’s 2015 Mustang at the LA Auto Show a few days ago, I’ve had a touch of pony fever.  Truth be told, ever since the 2005 restyle, I’ve craned my neck when one drives by and soaked in the retro-styled design.  Of course the idea of spending $30k+ on a car (that wasn’t a depreciated $150k classic) is completely foreign to this tightwad, but I knew it was only a few years before prices dropped. Time marched on, and with the release of the new Mustang, the time couldn’t be better to pickup an early S197 generation Mustang — but we are going to focus on basic V8, manual trans examples and see if we can find a Bullitt, (GT/CS) California Special or Shelby GT in the mix. 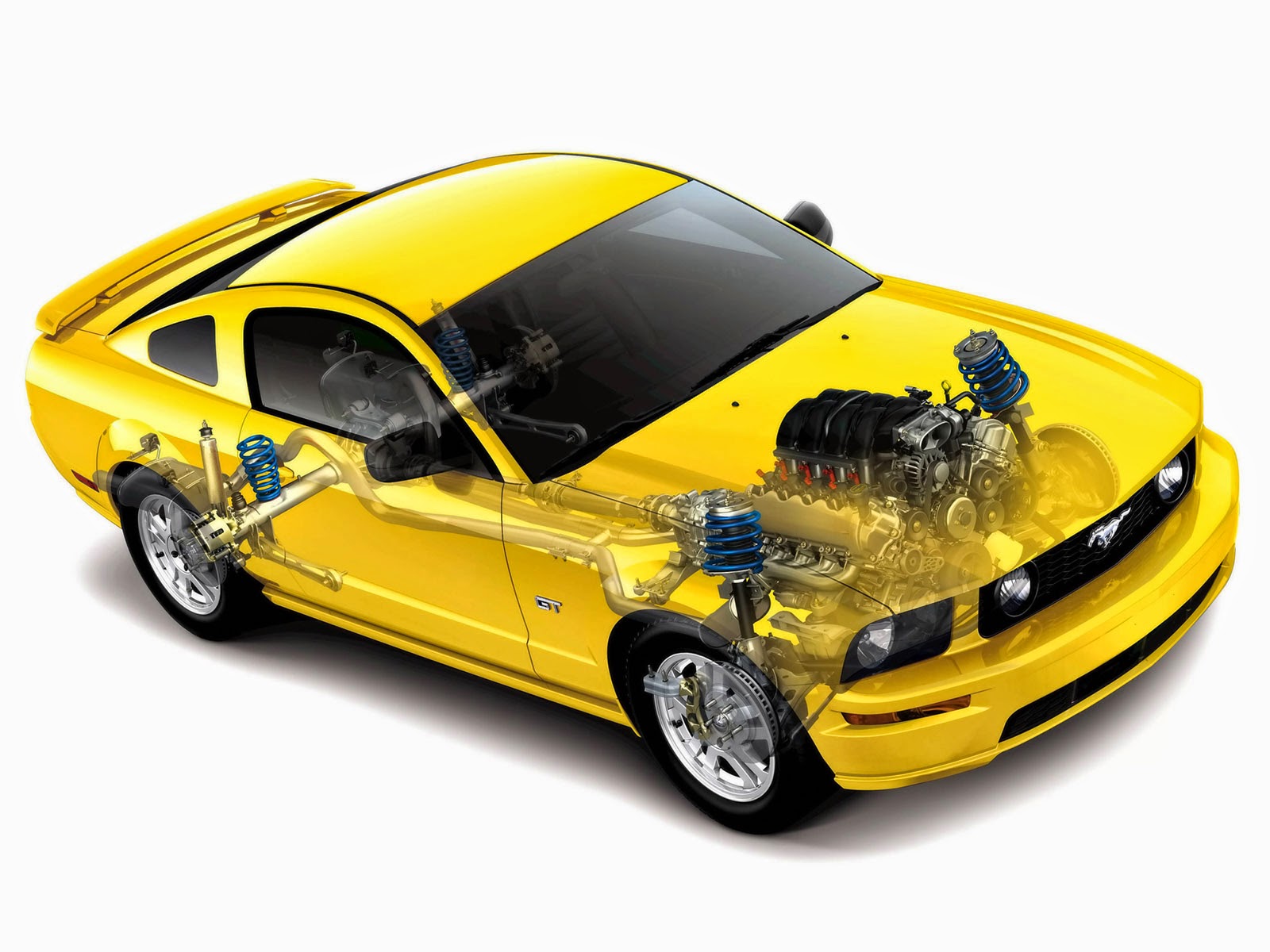 The 2005 model year release of the S197 Mustang was the first complete re-design of the world’s
favorite pony car since 1978. Sure, the Fox platform had seen some major changes throughout its years, but Ford had a hard time hiding 26 years of age.  Personally, I have never enjoyed the bulbous hood and Fox-meets-Camry styling of the 1994-1998 Mustangs and the New Edge redesign created a Stealth Fighter-meets-Camry look, but it had lost much of the quintessential Mustangness of yesteryear.  The long flat hood, pronounced rear fenders and sweeping fastback shape was all but gone. The 2005 restyle was a home run for the design group, but the 2010 restyle improved it a little more…and 2015 got better…so on and so forth.  Fox performance had also lagged at least 10 years behind Chevy’s pony car offerings, but the new car came with additional power in the every model.  The GT comes with a 3-valve SOHC version of Ford’s 4.6 liter modular V8 that puts out 300 horsepower and 325 ft-lbs of torque.  Performance in the S197 is about 5 seconds flat to 60mph and 13.5 seconds @ 103mph in the 1/4 mile.   Time to see what you can get in a 2005-2009 because prices on those have come down as the new cars have gotten prettier. 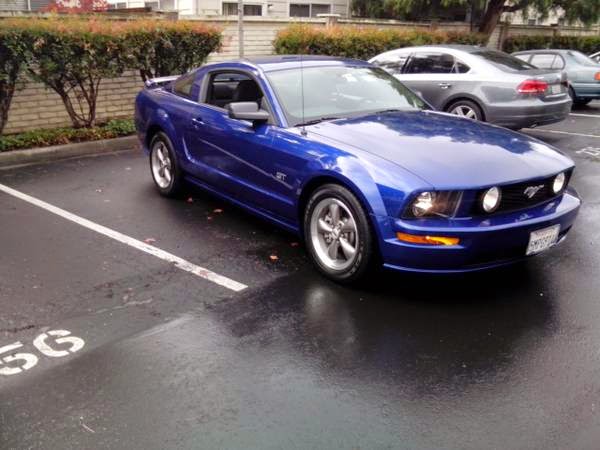 Starting at the bottom, $9,500 will get you this sonic blue 2006 Ford Mustang GT, here on craigslist, located in SF Bay Area.  This is a stripper model, equipped with cloth seats and few options, but the Bullitt style wheels look nice and the price is nice if the undisclosed miles aren’t too high. 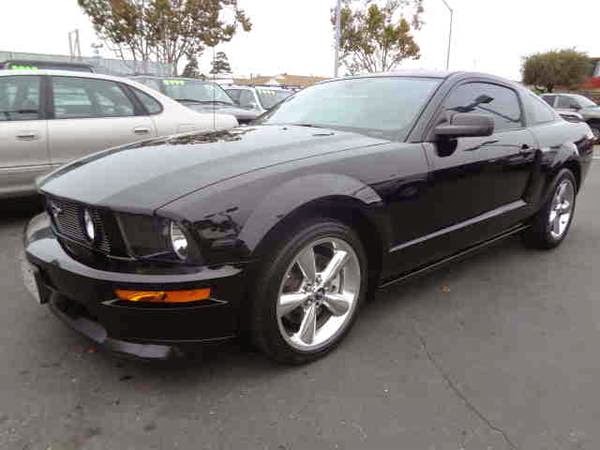 Another SF Bay area Mustang??  The regular featuring of Bay Area cars on DT isn’t a coincidence, it is because the mild climate and robust car culture (not a car customization scene like you have in LA) makes SFBay Area craigslist the Mecca of motoring — particularly if you are into low budget classics. This 2007 Mustang GT is listed as a California Special (GT/CS) (although it is difficult to tell if the GT/CS logo is on the fender) here on craigslist and is an interesting prospect at $10,499 asking even with 141k miles on the odo.  The GT/CS lower front fascia, non functional side scoops and 18 inch wheels make for a future collectible.  If you are going to buy an S197 Mustang, why not get a special edition, they don’t cost much more and will certainly hold value longer if they are in good shape. 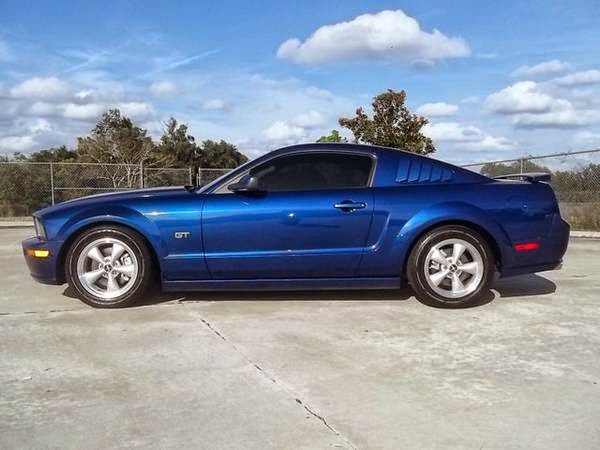 Another blue GT made the list, this 2006 Ford Mustang GT can be found on craigslist here, is offered for $11,995 from a dealer in Orlando, FL.  This car has 88k miles on the odometer and sports a number of aftermarket modifications, including a cold air intake, an S2000 style push button start and a cue-ball shaped Hurst shifter knob.  For a budget of just over $10k it makes a decent alternative to a 2015 Chevy Spark. 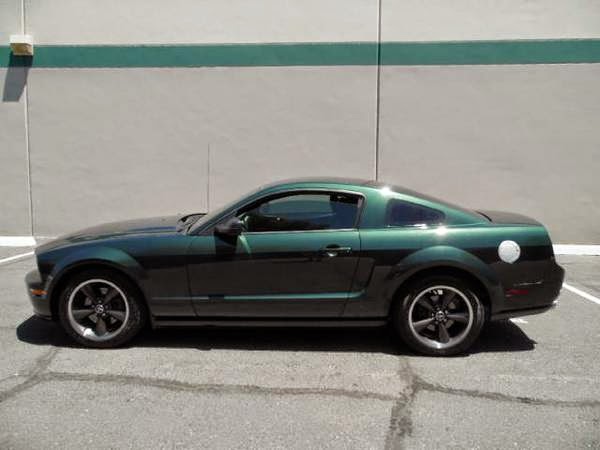 The 2008/2009 model year Bullitt edition is one of my favorite of the S197 special editions.  An homage to Lieutenant Frank Bullitt’s (Steve McQueen) ’68 Fastback, it was only available in high green or black and featured a ponyless/foglightless front grill, no wing, no GT fender emblems, dark gray 18-inch cast-aluminum wheels, uprated to 315 hp 4.6 liter V8 and a faux gas cap out back creates a clean/uncluttered look and is another future collectors item.  This 2008 Ford Mustang Bullitt GT is offered for $12,900 in Phoenix, AZ here on craigslist from a dealer. 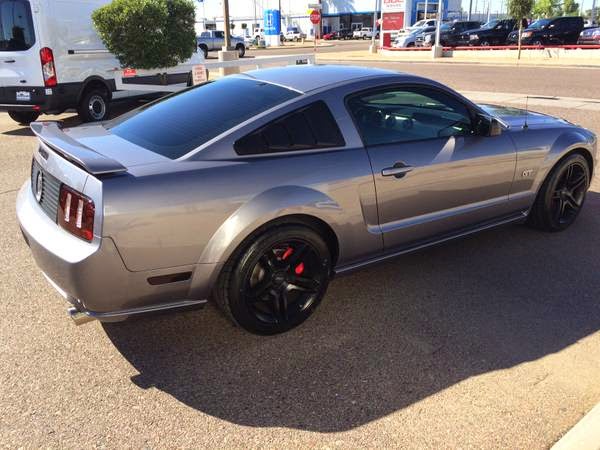 This next S197 Mustang is a 2006 GT with only 60k miles on the odometer offered for $13,950 here on craigslist from a private party located in Avondale, AZ.  The car has a few modifications, tinted windows, cat-back exhaust, aftermarket wheels sporting seriously wide rubber, and Raxiom headlights, but the price is decent and it looks nice. 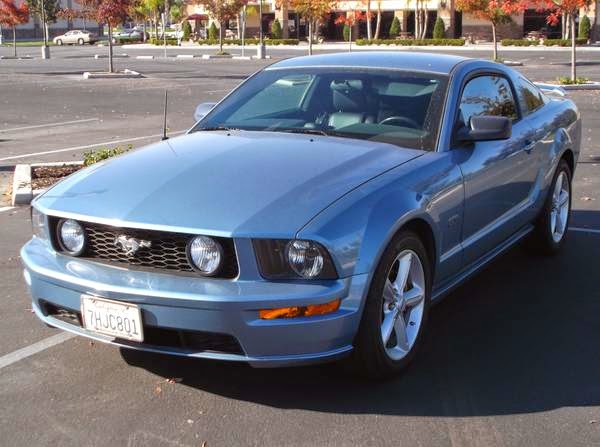 I always enjoy it when sellers use superfluous adjectives to describe their offering — this next Mustang is listed as a  2005 Ford Mustang GT Premium in “Immaculate Condition.”  Find it here on craigslist, offered for $14,995 in Castaic, CA.  The car does look immaculate in the photos, but in its 62k miles it has seen some customization in the form of Raxiom 5th generation LED sequential smoked tail signal tail lights, MMD
deck lid, GT floor matts, smoked fog light cover, MMD side mirror color
match cover, Sylvania Silverstar ZXE super white bulb for headlights
and clutch pedal extension.  Those modifications won’t add any value to someone looking for a stock example to keep for many years and if anything might decrease value a smidgen. 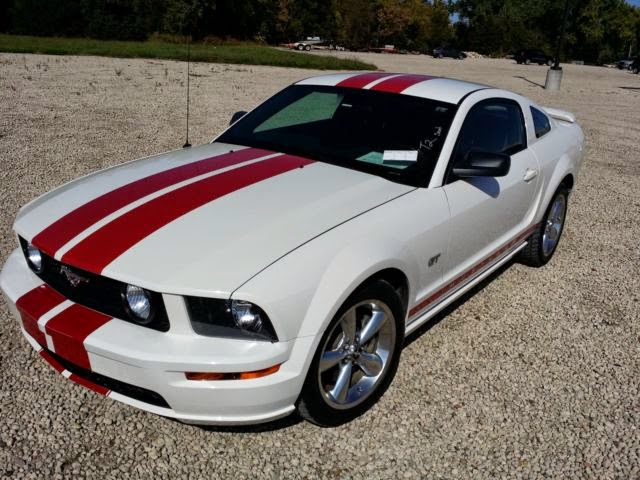 A smart buyer knows that there is a miles/price curve that flattens out as you get near the extremes, a car with 175k miles won’t be any cheaper than a car with 150k miles, and a car with 40k miles won’t cost much more than one with 50k miles.  If you pay close attention to the mile/cost relationship you can avoid losing too much money on a car — but this 2006 Ford Mustang GT offered for $15,995 buy-it-now found here on eBay

, falls into an ambiguous mile range with only 53k miles on the clock.  It isn’t a 10k mile example that belongs in a museum or a 100k mile destined for the junkyard…and the trick is to buy from someone who just treats it like a consumable and sell it to someone who wants it for his personal museum.

Wow…this list is getting long.  So many Mustangs.  Time for a musical interlude.  Watch this 2004 era commercial for the S197 Mustang here on youtube.  The commercial is a surreal tribute to a 50’s era ‘Murica where everybody drives domestic and a family has a welcome home party for their kid, but the father figure is out gallivanting around in his 69 Fastback.  Emotional music plays in the background (do I hear a banjo?) and then later Mr Parties-Is-Women’s-Work Dad gives his kid a new Mustang to help him forget about the time he had to bayonet some evil-doers in a sand filled foxhole far from home.  Someday son, this will all be…mine.  Now get a job and your own place, my old school pension includes health benefits and I plan on living in an iron lung until I am at least 99, and that 25 year-old Thai lady from the internet who is going to replace your mom soon has crazy expensive taste. 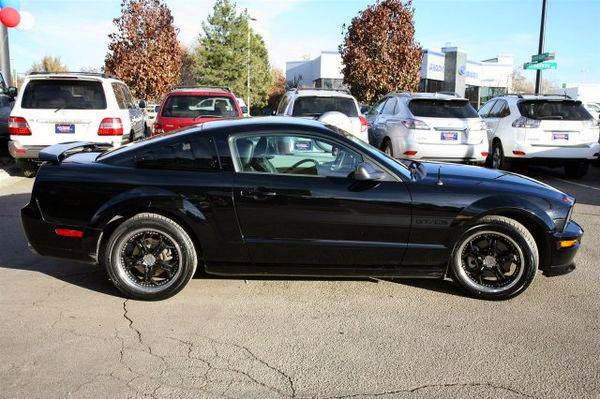 Intermission is over, back to the show.  This next 2007 Ford Mustang GT is another California Special (GT/CS) offered for $16975 here on craigslist from a two-bit dealer in Denver, CO.  On the plus side, this car has only 32k miles on the odometer and looks clean, but unfortunately it is autotragic and wears hideous rims.  Those rims make me want to gouge my eyes out with a Klingon bat’leth. If you like your S197s on the wild side, this next one is a good choice.  It is a 2007 Ford Mustang  Saleen S302-PJ Parneli Jones Edition (#402 of 500) and offered for $17,999 here on craigslist, located near Seattle, WA.  The car was in an accident that gave it a salvage title, but the price to wackiness ratio is hard to beat.  The S302-PJ uses a 5.0 liter stroked version of the 4.6 modular engine that puts out 400 horsepower and a unique watts link rear end setup.  Original MSRP was above $60k, so this one wins the depreciation contest, read an S302-PJ review on autoblog here. 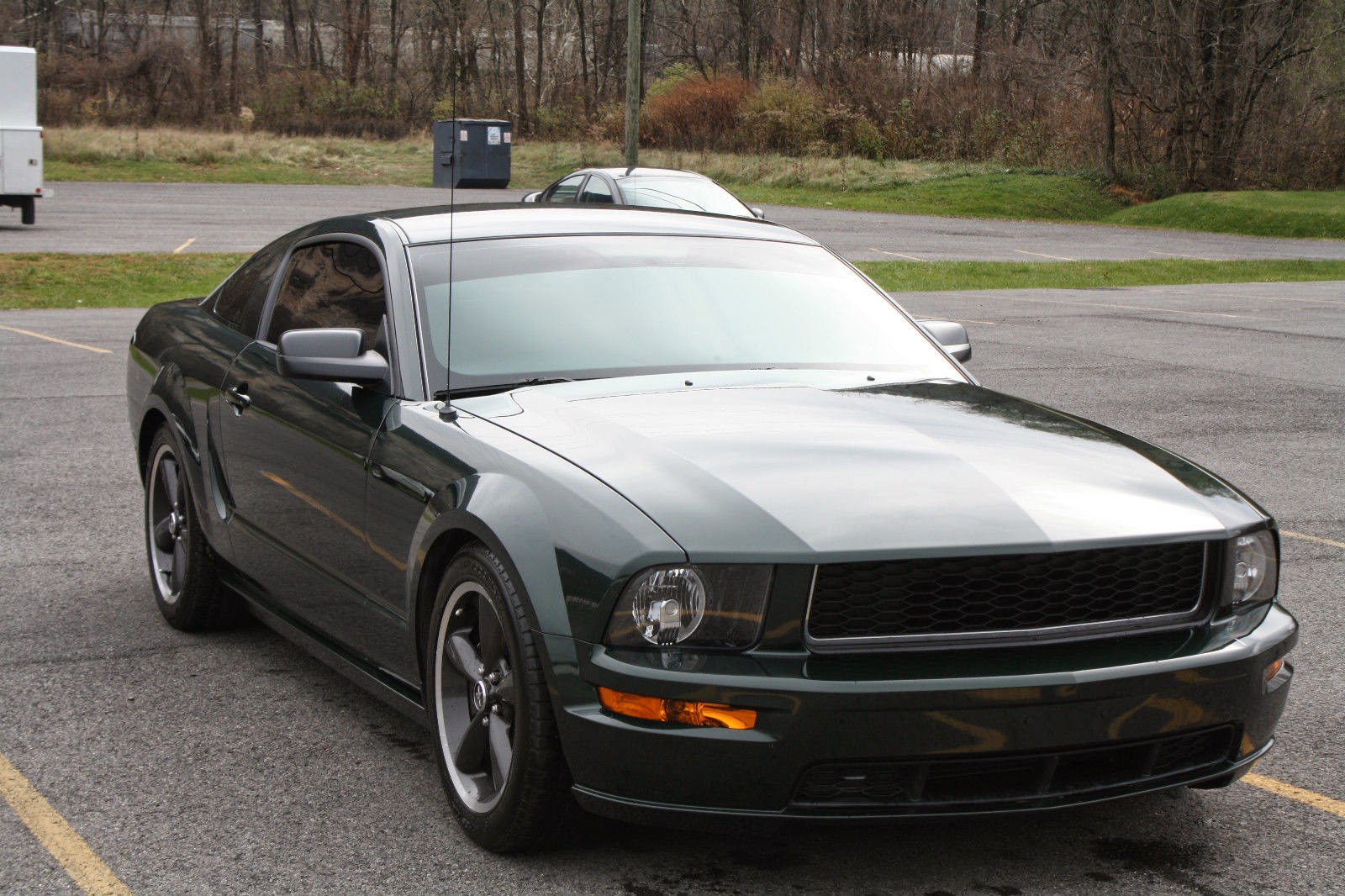 Another fine example of the Bullitt Mustang, this 2009 Ford Mustang Bullitt GT has only 15k miles on the odometer and is offered here on eBay

for $19,500 buy-it-now, located in Cumberland, MD.  The Bullitt would be my choice for a used S197 — a bit of exclusivity and some extra power for a few more bones.  The price is high enough that you could almost consider a new 2015 Mustang V6…but…who wants a V6? 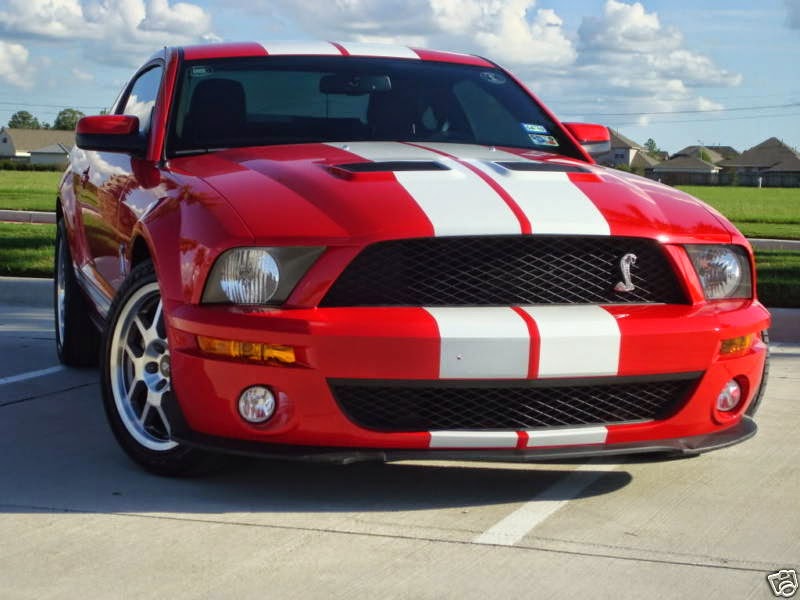 This last car comes without a photo, so I had to grab one from the web (if it is your photo, just mention it in the comments and add an attribution link).  The Shelby GT500 was the mega Mustang to get and its 500 horsepower supercharged 5.4 liter modular V8 mated to a 6-speed was the performance bargain of the oughts.  This 2007 Shelby Mustang GT500 is offered for $35,000 here on craigslist, located in Los Angeles, CA.  The price seems really cheap for a car with only 990 miles on it, so beware of scammers, but it cold be a buyer anxious to unload his car quickly.