This next Reader Ride feature comes from Nick Vance, who is submitting pictures of the car and its story for his father, Dan. The car is a stunning example of a strange piece of iron, a 1975 / Ford / Capri II / John Player Special Race Car (Based on the road going version known as the Black Cat in America.) 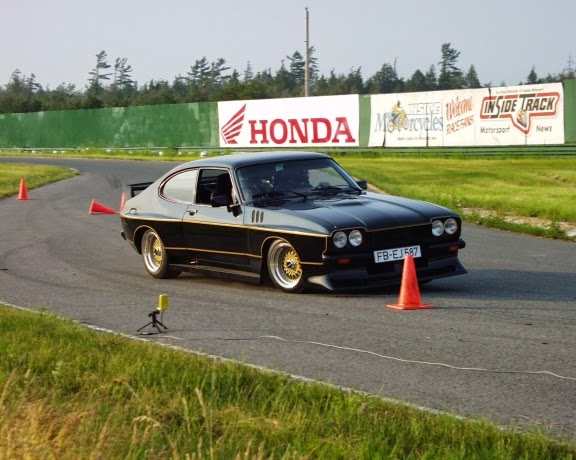 -My father bought this car in summer of 1992 while on posting with the Canadian Forces at CFB Lahr.

-He
bought the car because his daily driver while in Germany was a 2 litre
Capri II, bone stock, tan on white. He was sharing a beer with a friend
one evening, saying he loved the car so much, he would ship it home when
he left Germany. His friend tells him, no, I’ll show you a car to take
home. They roll up to the owners house where the car is, and there in
front of the enormous house, is a split window Corvette and a big block
Chevelle. Oh dear, this guy is going to want crazy money for the car.
They walk through his work shop passing half a dozen other rare American
cars until they get to the back of the building, and there it is. The
JPS. Even though he seemed to prefer the American muscle cars, the Capri
was immaculate. The fibreglass fender flares and air damn, even the
foam rubber rear wing are all intact and free of any damage. 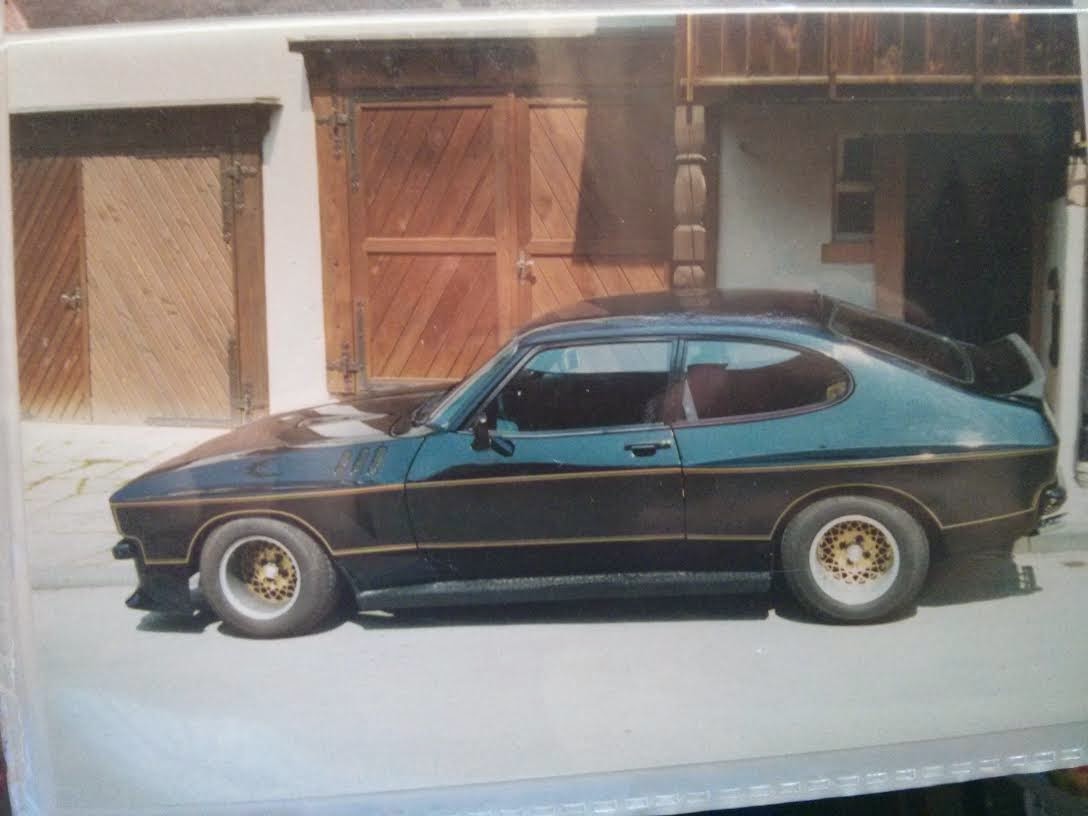 -They take the car out for a test drive, the turbo charged
2.8 V6 ran perfectly. So my father is driving along the Autobahn, with
the owner in the passenger seat, and all of a sudden, he goes, well, let
it rip. Wind it out. The speedometer is maxed before they hit the top
of fourth gear. When they return to the owners home, he tells my father
to pull it in over the pit in his garage. He then proceeds to get a rag
and soapy bucket of water, and washed the underside of the car.

-A few days later, the car is in my fathers drive way next to the 2 litre, my mothers Mazda GLC and the 2 motor cycles. 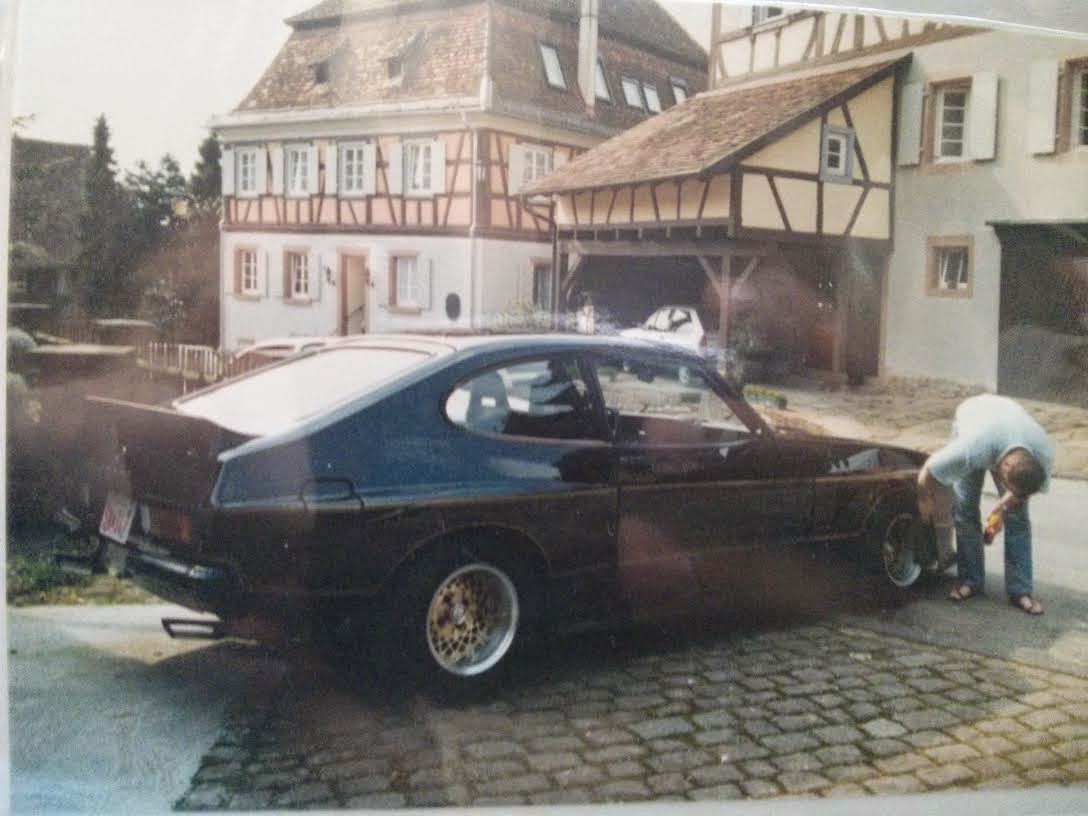 -The car is broken, more on that later, but when it does run,
my father races it with the St. Lawrence Auto Club. Mostly SOLO II auto
cross, but he has had it out to a few lap days at Mosport. Its an
interesting car to drive on the street as loud as it is, lacking side
markers, interior, and having to use the old German licence plate on the
front so it doesn’t chafe the paint.

-Depending on how you look at this, it’s either extensively modified or
almost completely original. Some back ground to tell you what I mean. 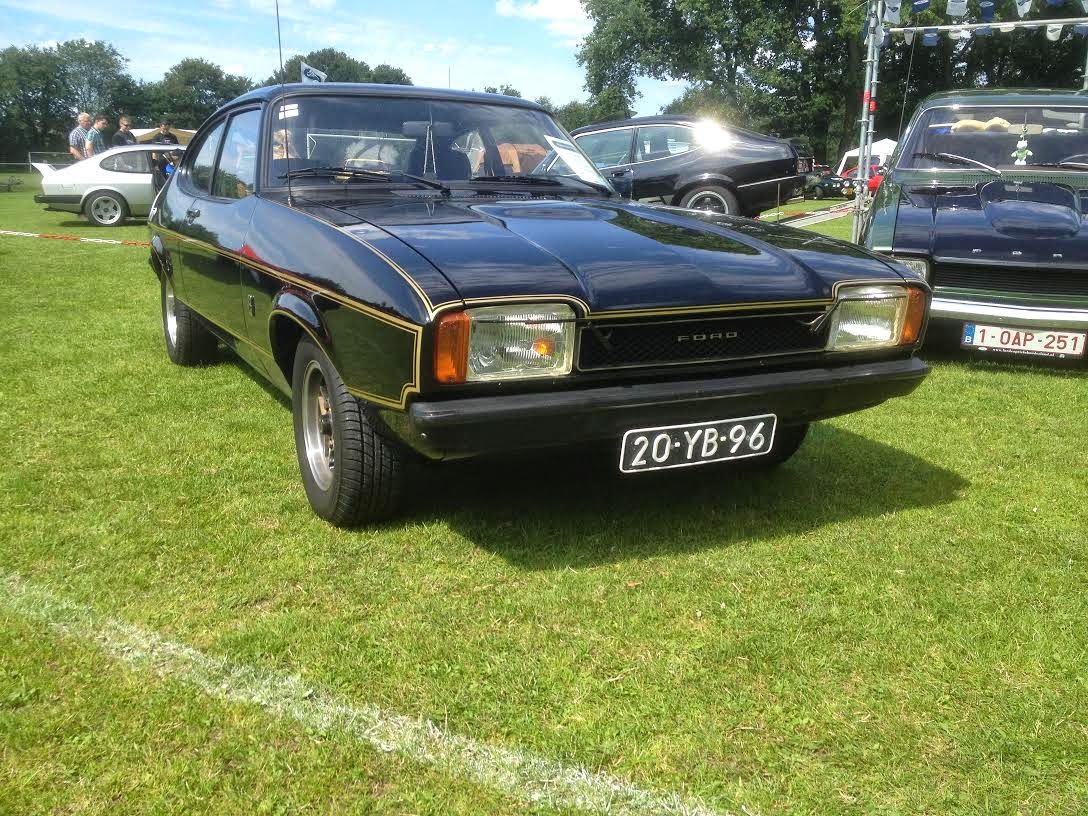 -When brand new, (look up ^) this car along with 49 others
were sent to a now defunct racing shop called Krabb Racing to be
converted for racing duty in the German Touring Car Series. Think early
Shelby Mustangs, same idea. Most of the car was stripped off, all four
quarter panels were replaced with flared fibre glass versions, a very
substantial air dam was added to the front, along with a foam rubber
wing on the rear. The original bumpers were cut down and drilled, and
the car still sports these today. 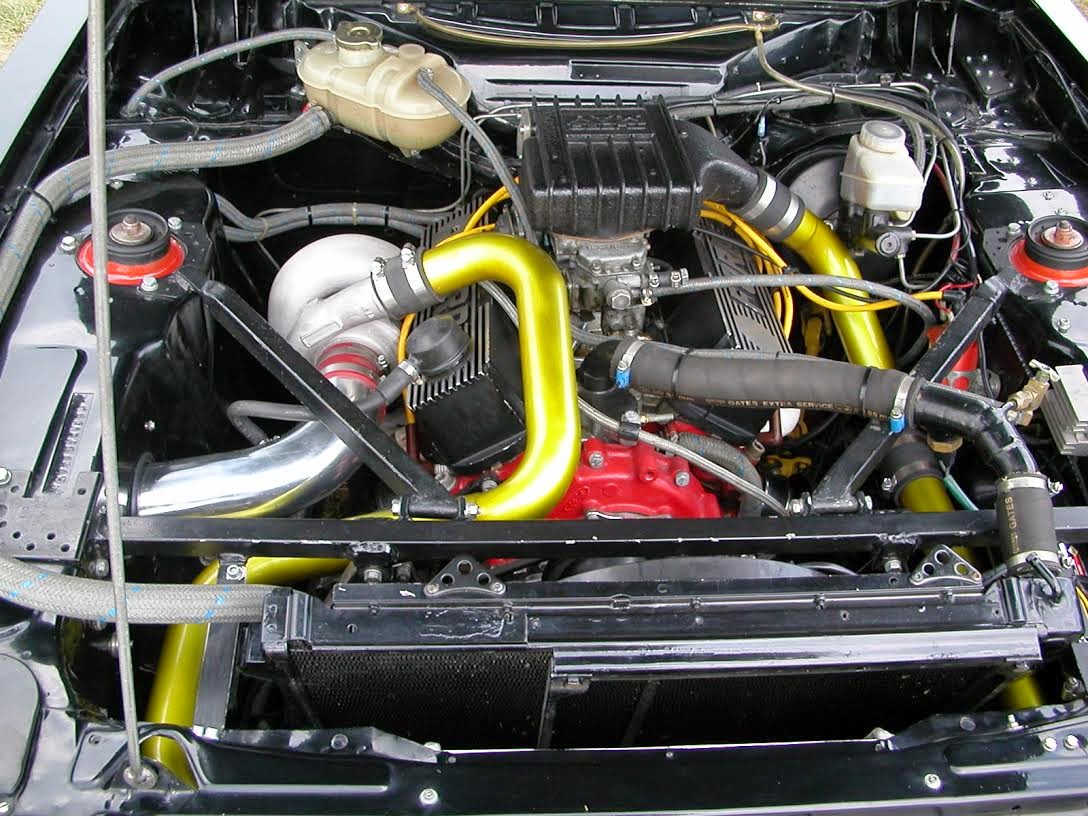 – The entire interior except the dash board was stripped out, then
the radio was removed and replaced with a block out plate that later
housed a boost gauge and transmission temp guage when the turbo was
added. A center console was fabricated out of aluminium, and four more
gauges were added, as well as a bank of switches to control everything
from the driving lights to the fans fuel pumps and the ignition its
self. An aluminium racing bucket and extensive roll cage filled all the
available space. 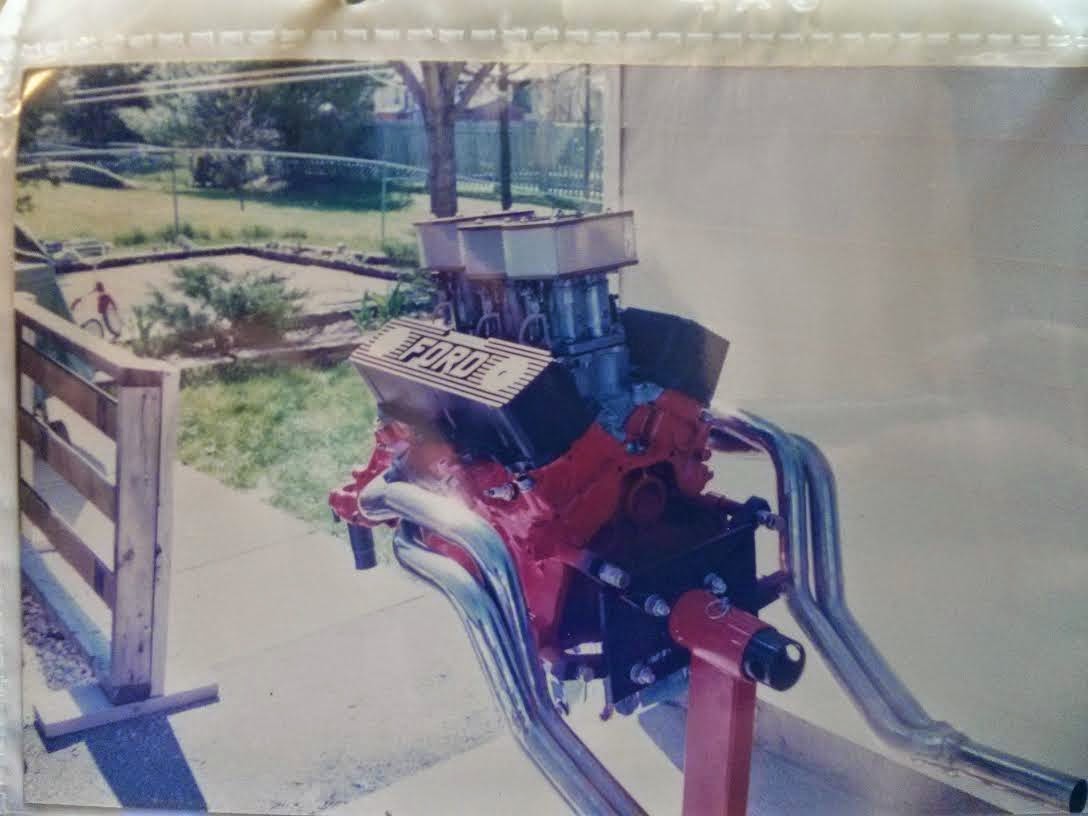 -The suspension is very close to stock Capri, but with some up
grades. At the rear is the original 7.5″ Ford solid axle, suspended by a
pair of mono-leaf springs and fully adjustable shocks. The differential
had 2.73:1, now 3.25:1, gears and a limited slip.

-The front is still MacPhereson struts, but again, fully adjustable,
lowered and with a different spring rate. Sway bars and larger front
brakes from a Ford Taunus, yes Taunus, not Taurus were also added.
13″x8″ BBS three piece wheels made for these 50 cars round that out. It
now rides on 15″x8″ PRIMEs wrapped in Toyo RA-1 Proxis. 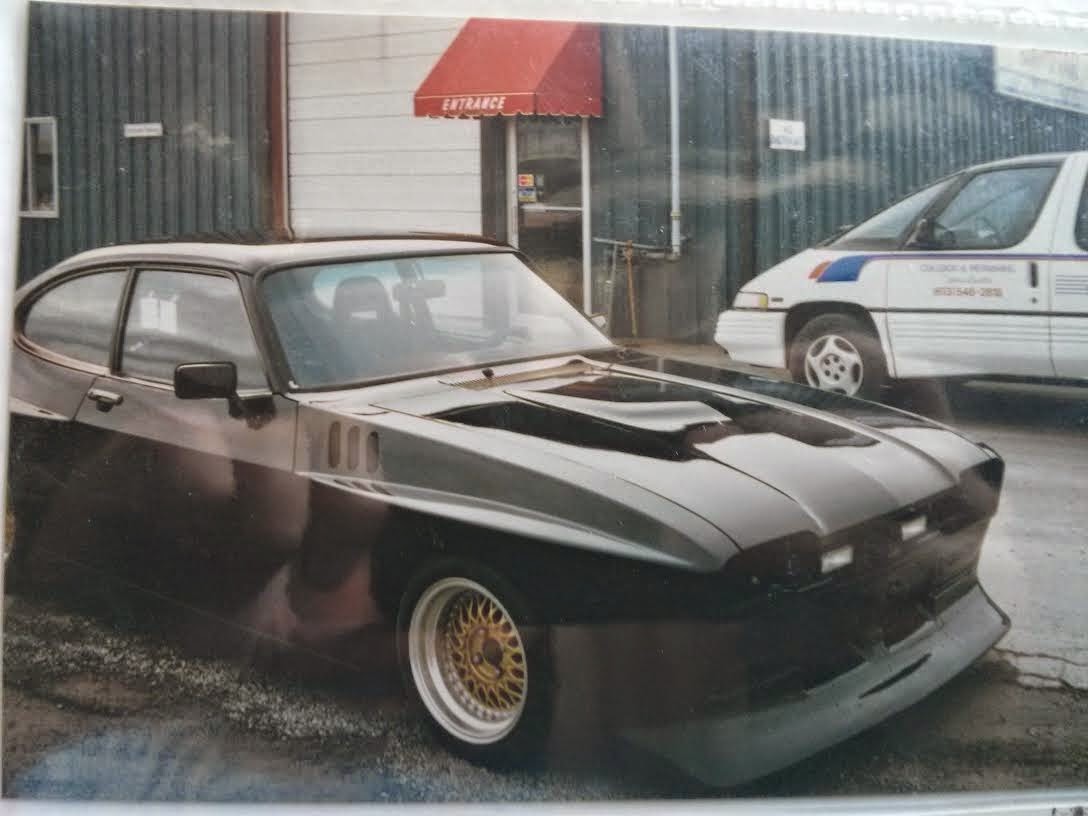 -The transmission, a ZF 5-speed is also from a larger European
Ford, possibly the aforementioned Taunus. The only modification made to
it is a different shifter since the plastic pivot ball shattered. A
heavy duty Centerforce clutch links it together and an aluminium one
piece drive shaft gets power to the rear axle.

-I had to put the engine bits at the bottom otherwise you wouldn’t read the rest, would you? 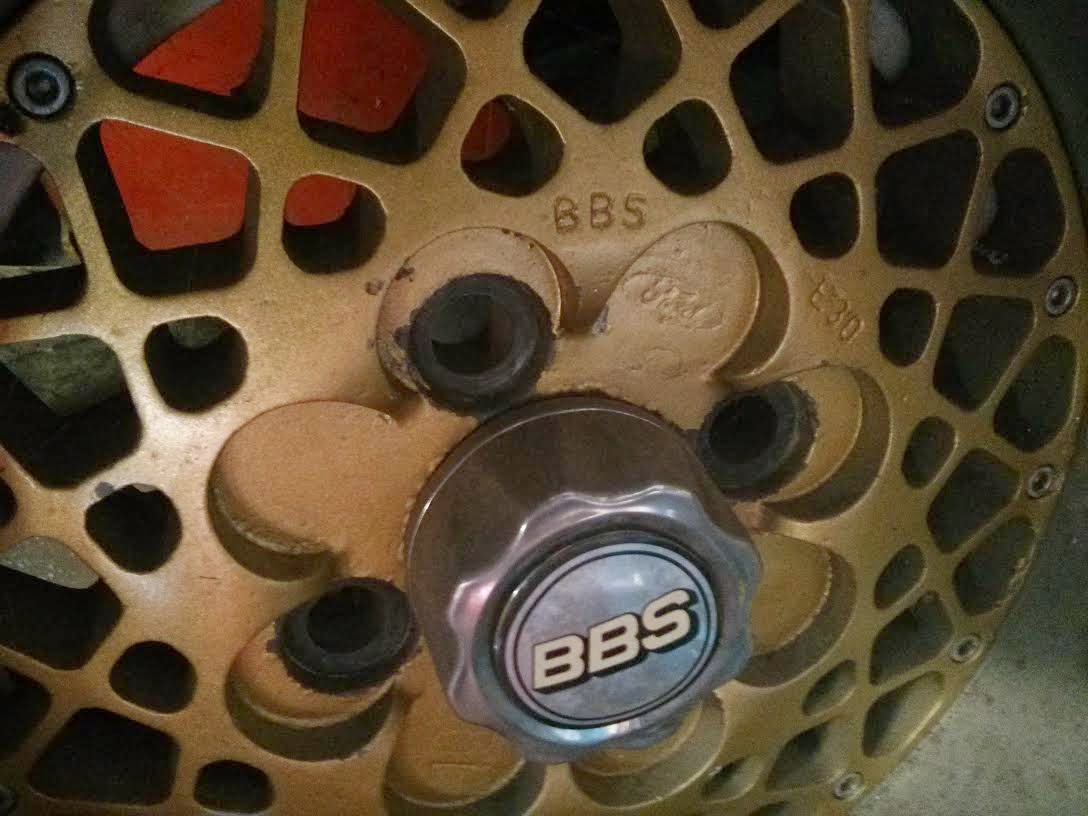 When
the car left Krabb, it left with the original 2.8 V6. Sort of. The
entire bottom end was redone, steel crank shaft and new pistons and
connecting rods. The iron heads were ported, polished and new larger
valves and double springs were fitted. The topper was an intake sporting
three Solex 40-42 2 barrel carburetors. These were often found on old
Saabs. This wasn’t anything like a Chevy Tri-Power or Chrysler Six Pack.
Each barrel of each carb had its own intake runner. Not a very
street-able setup, considering it crammed over 1000 cfm down the throat
of the little V6. 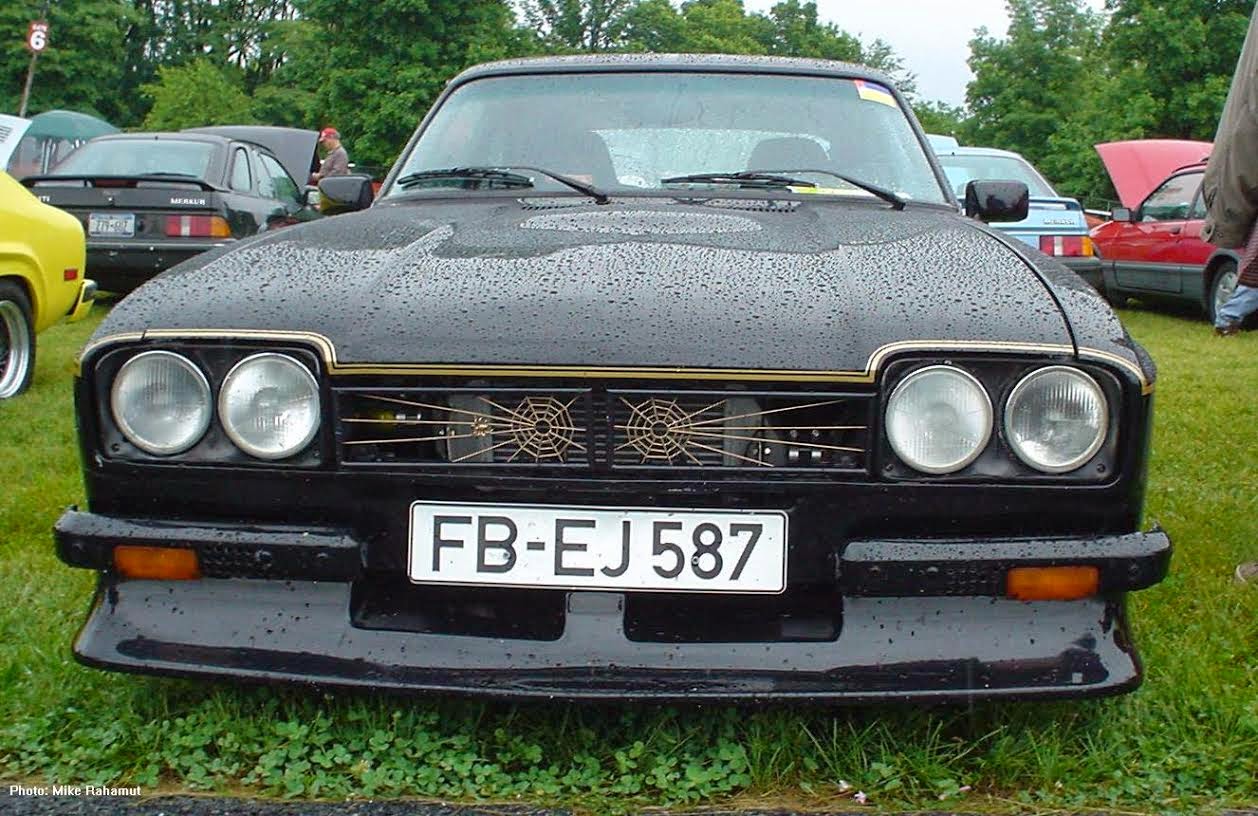 -Today the car sports a turbo charger from May Turbo. An
Audi intercooler cools the charge before it goes through a Weber 2
barrel and aluminium intake. In street tune, runs around 13 psi and
makes 300 wheel horsepower. It has been turned up as high as 30 psi for a
short time, and it was astronomically fast. Pretty peppy in a car that
only weighs 2200 pounds.

-When the car was built by
Krabb originally, every part had to be available from Ford to keep it
legal for the class they wanted to race in. Even today some of the parts
are still available, like the body kit. 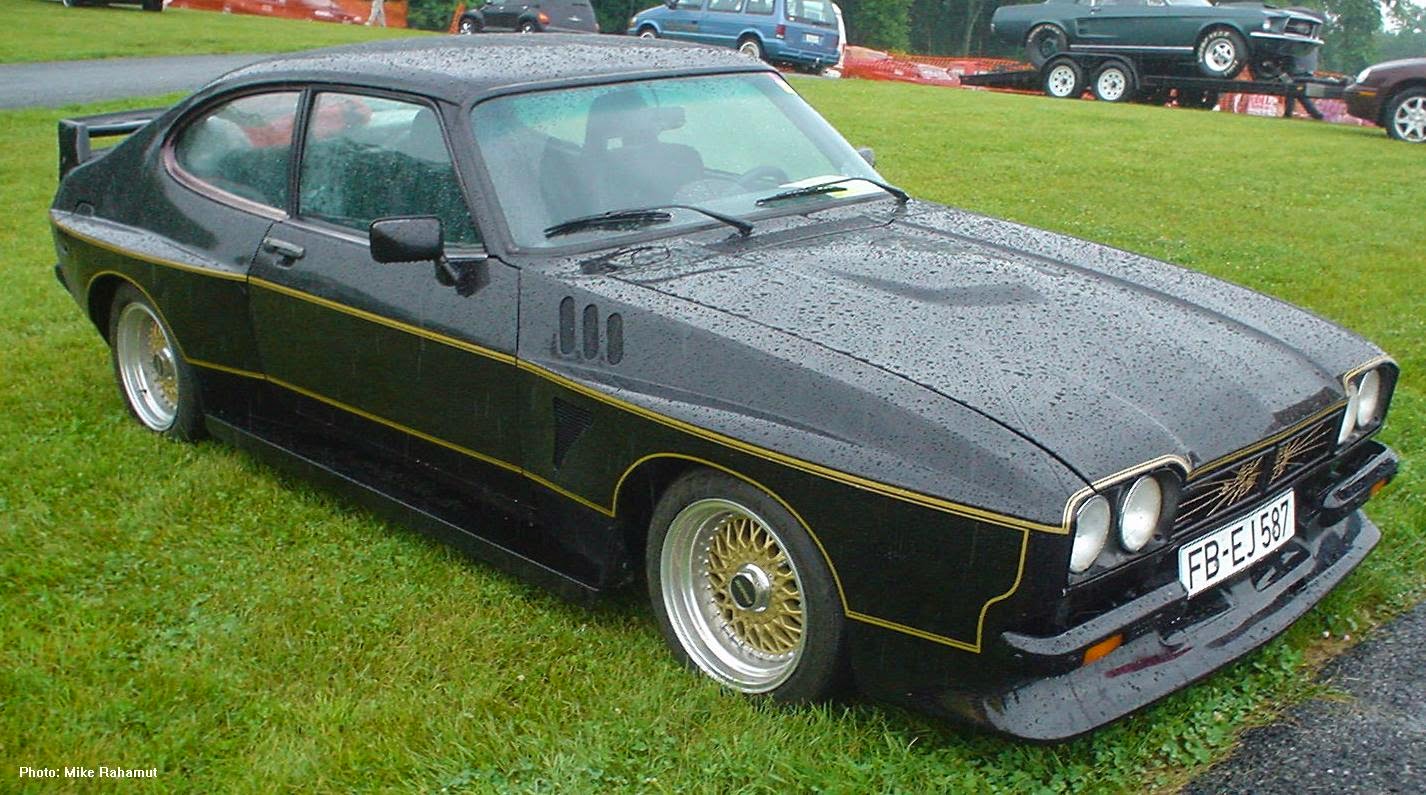 -I wasn’t around yet, but as the story goes, the most memorable event
to date was when the car was maxxed on the Autobahn. The speedometer on
the car, still being the original, only goes up to 220 km/h. That is
eclipsed well before the end of fourth gear. So one day the friend that
convinced my father to buy the car decided they needed to know exactly
how fast it was. So he gets in his Porsche Turbo, my father in the
Capri. Now, I don’t know how they figured it out, or the details of that
blast, but I do know the Capri managed 283 km/h that night. Know the
conversion? That’s just a hair over 175 miles per hour. In a car built
in 1975. 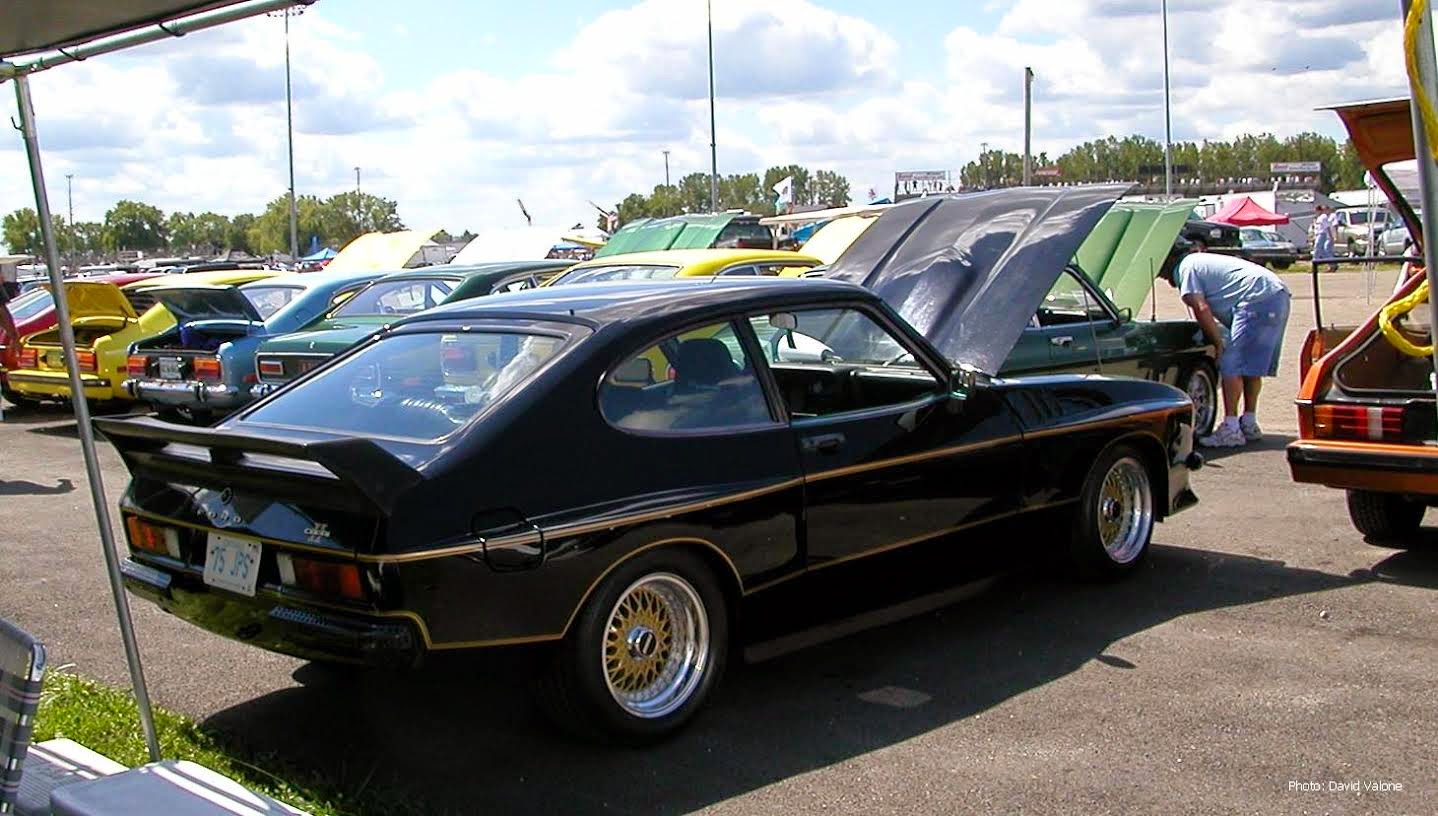 -This is the sadder part of this story. In the spring of 2009, we were taking the car out of winter storage, and a connecting rod decided it was time. It was a 34 year old bottom end, and it didn’t exactly lead an easy life. The number one rod snapped clean in two, punching a hole in the oil pan and taking two large chunks out of the block. It was done for. It has taken six years to find all the parts again. The pistons and head gaskets for example had to be custom made for this engine. Try and find copper head gaskets or .060 over forged pistons for a 2.8 Ford V6 and let me know how you get on. But it is now almost ready to go back in the car. I cant wait. 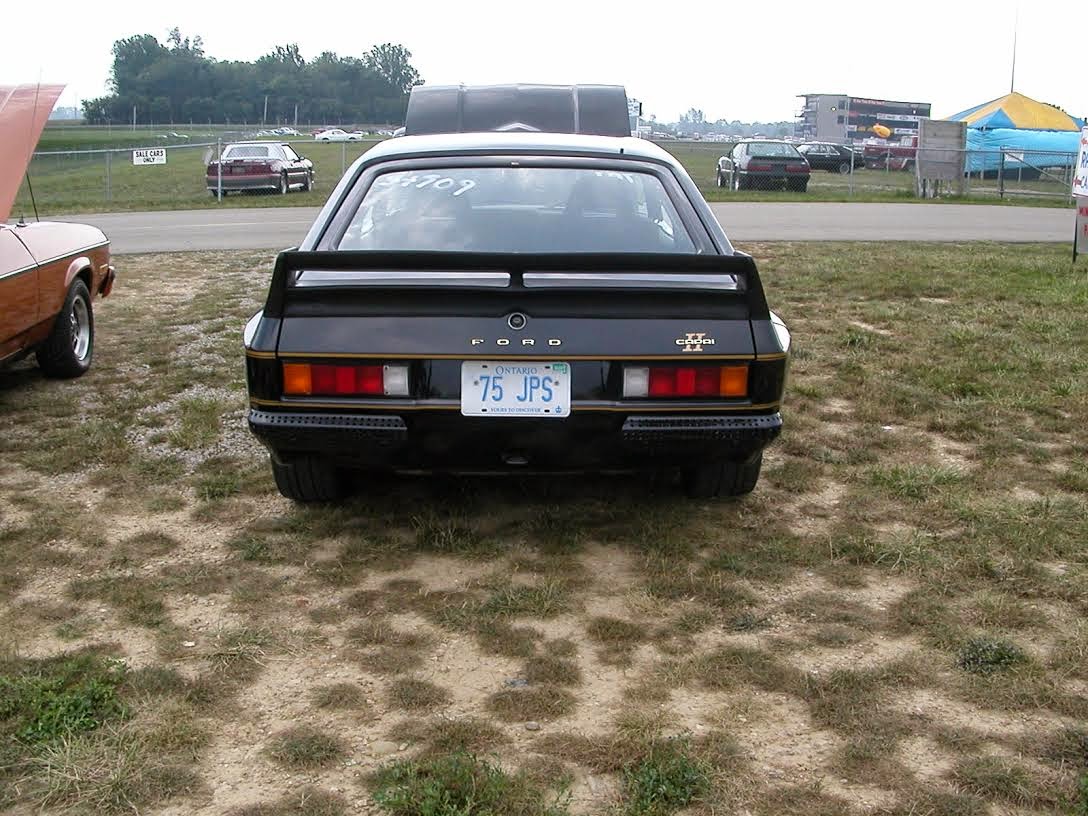 -This car is #43 of 50 ever built. You are more likely to see certain super cars than one of these. And keep i mind all 50 of those were race cars. how many still survive? 30? 15? Maybe less? According to the Capri Club of North America, this is the only race spec John Players Special Capri on the continent. So its rare. It’s one of the fastest things on the road. And at this point, it a family heirloom.

-Will he ever sell it? Not likely.

DT: Big thanks to Nick for the write up, this thing looks/sounds incredible.