You know what I love better than a gorgeous coupe fitted with a V12 powerplant offered for a reasonable price?  One with pop-up headlamps…because fixed beams are for chumps.  Yeah, there is only once choice — the BMW E31 8-series. Between 1989 and 1997 BMW sold only 7,000 of the shark nose E31 in North America, a luxury grand tourer meant not to just supersede the E24 6-series, but to also eclipse it in performance, price and prestige.  Find this 1991 BMW 850i offered for $15,995 in Smithfield, UT via craigslist. Tip from Rock On! 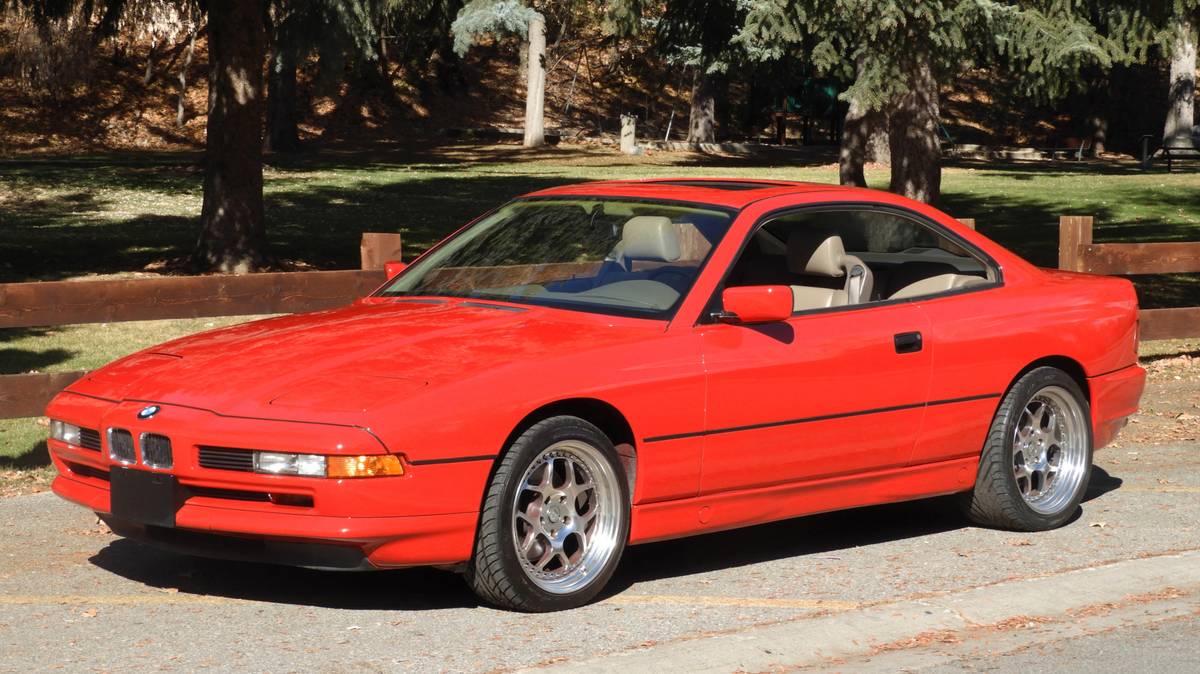 Gets lots of stares and thumbs up 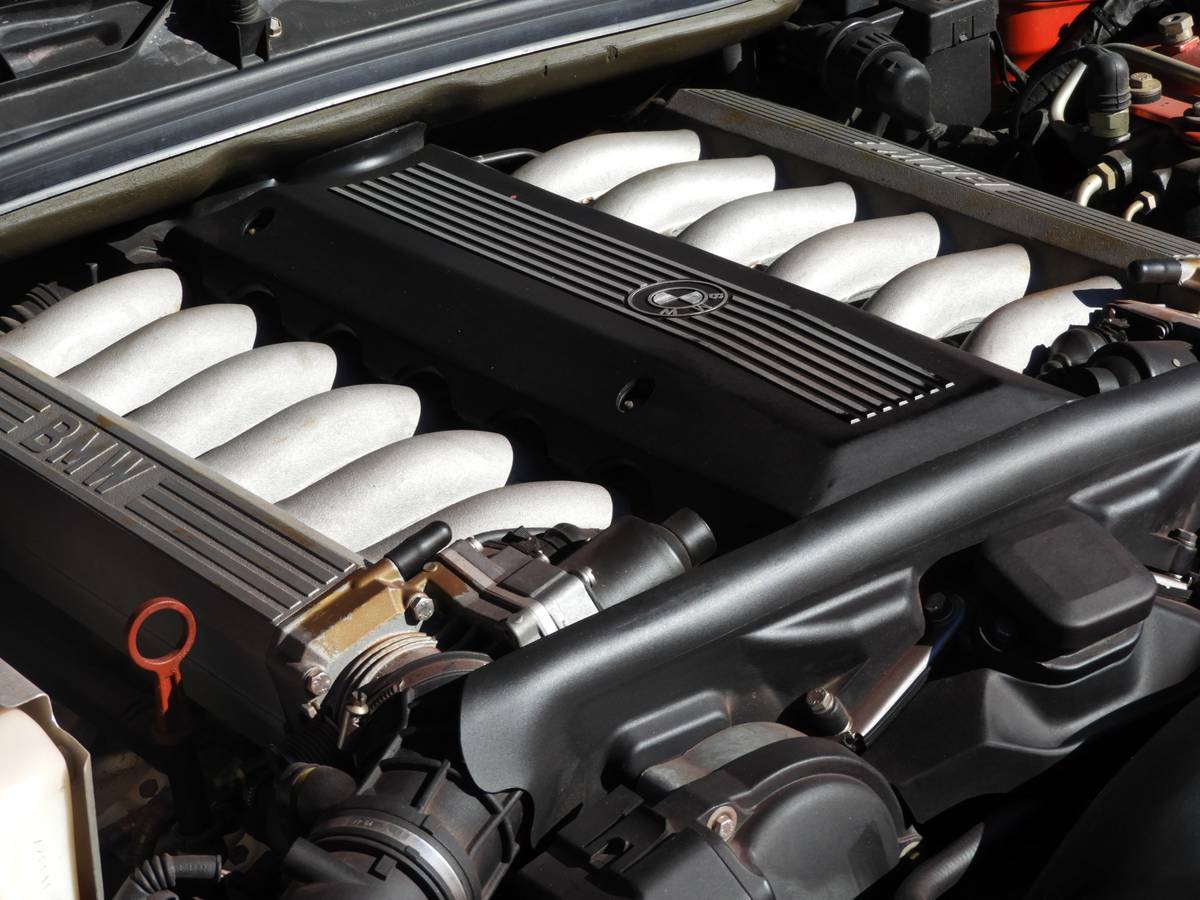 The BMW 850i was designed with pride by BMW with no expense spared, with the specific goal to surpass the Mercedes 560SEC and the Ferarri 348 as the best luxury touring coupe in the world. To say it was BMW’s “flagship” model would be an understatement. Its gorgeous pillarless coupe design, fantastic creature comforts, and the fanciest features of its day placed it in a category all its own. It was the first model designed by BMW with Computer Aided Design, resulting in not only a timeless look but also a drag coefficient of only 0.29. It was one of the first production vehicles in the world to use an electronic “fly by wire” throttle, and it also featured a very advanced multi-link rear axle. BMW was very proud of the result, as was summed up by a magazine ad for the 850i that said in big bold letters: “IF A CAR COMPANY CAN HAVE A SOUL, THIS IS OURS.”

There is nothing like the smoothness and power of the BMW 5.0L V-12. (There are many videos online where a coin is stood on its edge on top of the engine, and then the engine is started, rev’d up, and then shut off, and the coin doesn’t fall over because the engine is so smooth. A photo from one of those videos is in this listing for illustration purposes; it is not of this particular car).

The E31 body is stunning. It is the first, last, and only true pillarless coupe BMW ever made. Unlike its predecessors and successors that either had wing windows, or windows that didn’t roll down all the way, or a pillar between the front and rear windows, on this coupe when all four windows are down, there is nothing there. In the words of one owner, “For lack of better analogies, it’s like a beautiful woman teasing you by purposefully forgetting to wear a key item of clothing.” The body design is timeless. Everywhere it goes, it gets appreciative stares. Even young people stop and ask what it is. 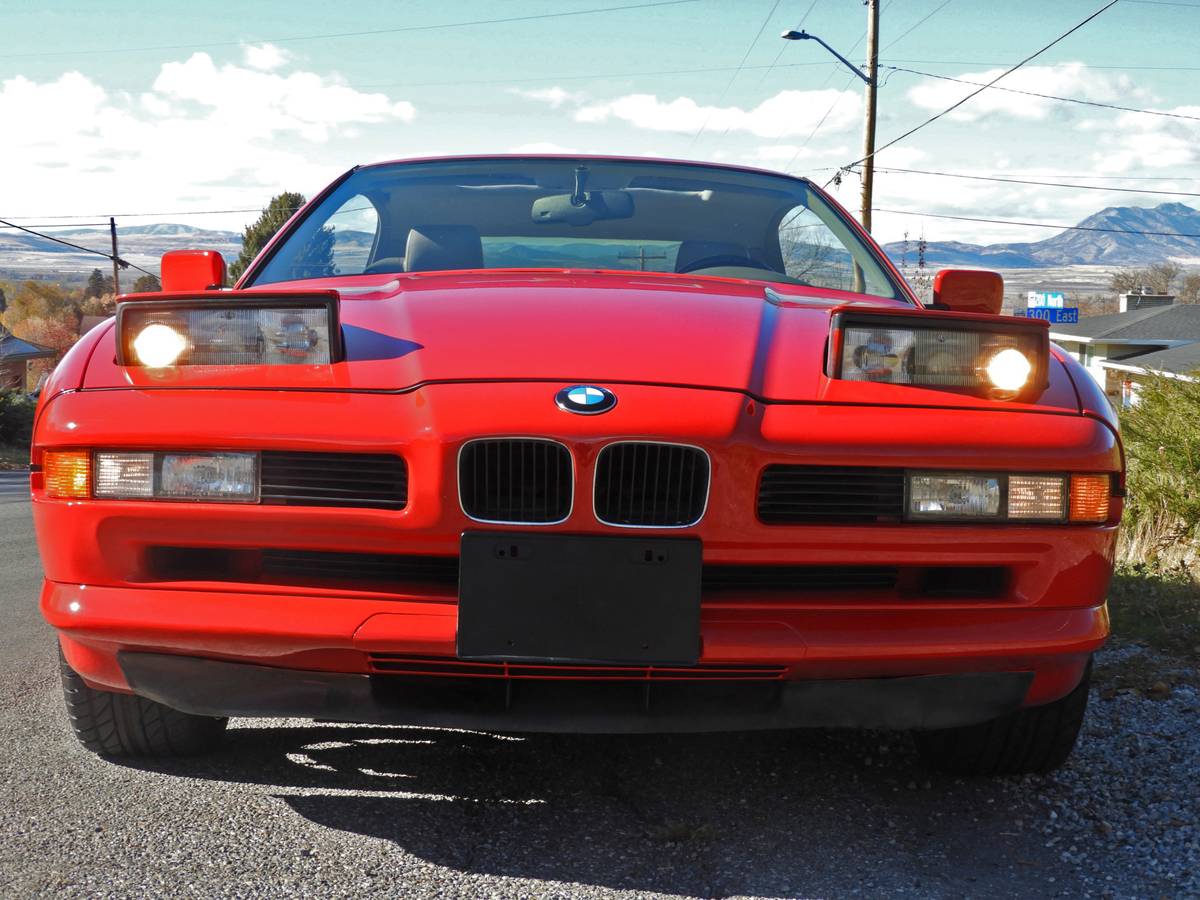 Power windows with one touch function

Power heated side mirrors with auto dip when in reverse

Examples of how sophisticated this car was in its day:

• The trunk handle does not operate a latch. It operates a switch that activates a servo that unlocks the trunk.

• Top speed is electronically governed to not exceed 156mph. (The previous owner confided that he got this very car up to 150mph on one occasion and it drove perfectly smoothly and was well mannered at that speed.)

• At 110mph, the windows and sunroof automatically close to reduce drag.

• When you open a door, the door window automatically drops ½ inch, then when you close the door, it rolls back up. This seals the door window tightly against the rubber seal at the front of the rear window – a sophisticated solution for the wind noise problem of a pillarless coupe.

• There isn’t room for the rear windows to roll down all the way. Rather than settling on a window that only rolls down half way, BMW engineers designed the window to twist as it slides down, so it will fit into the body panel.

• As the seat is moved back and down for a taller passenger, the headrest and the shoulder belt mount both automatically move higher.

• This is one of the very first cars designed with seat-integrated shoulder belts, which were necessary because of the lack of a B pillar. They are much more comfortable than pillar-mounted belts and are also easier to put on.

• This car has one of the most advanced suspensions ever put into a production vehicle, even to this day. It was designed not only to go 156mph, but to be stable and comfortable at that speed.

• This was the first car in the world to feature a centralized computer with a local area network to monitor and control the various functions throughout the car. 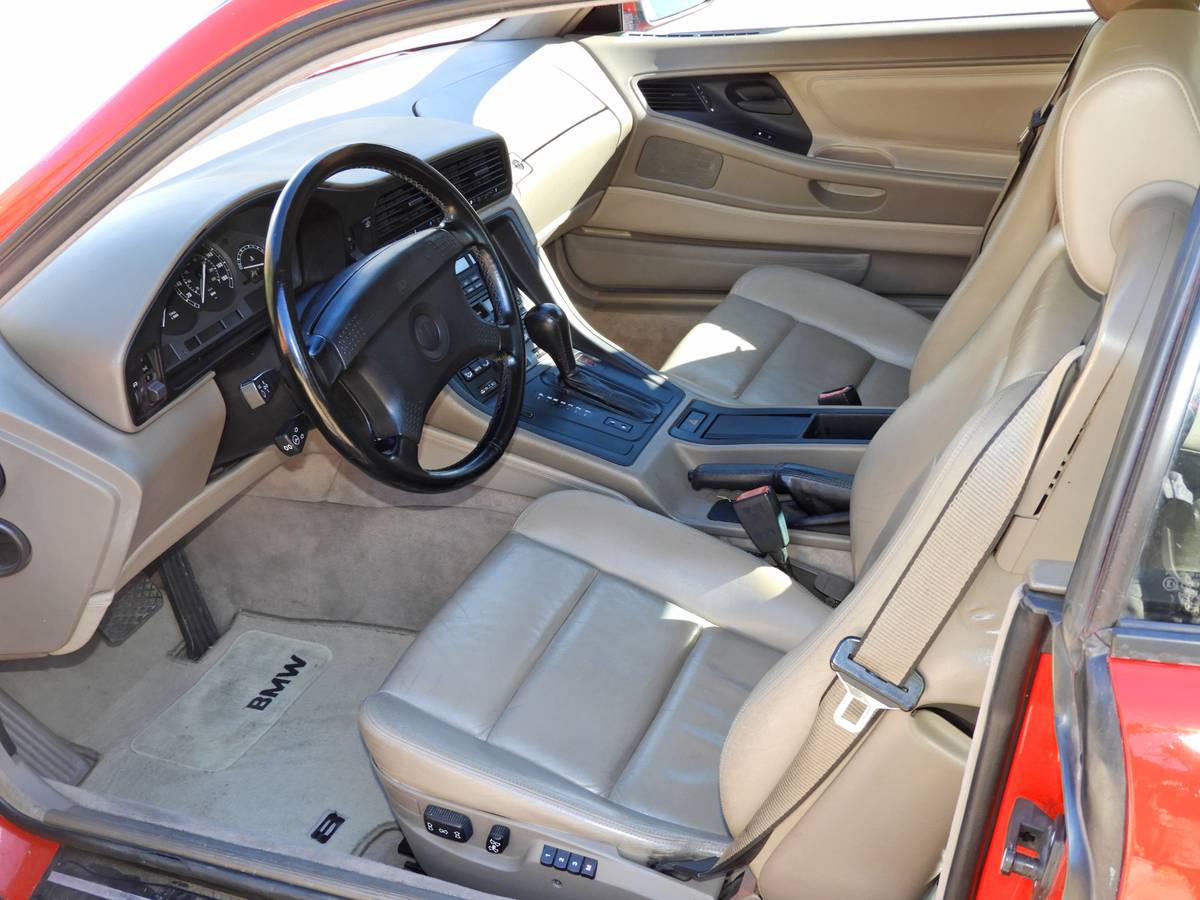 Specific information about this particular car:

Here is your chance to pick up an EXCELLENT classic top-of-the-line BMW 8 series coupe for a surprisingly affordable price. BMW’s slogan when this car was built was “Aus Freude am Fahren;” literally, “For Pleasure in Driving”, and this car lives up to that slogan. It is absolutely a pleasure to drive!

This car runs GREAT! Cold start is instant, idle is smooth, and it runs strong. The suspension and steering are tight and the alignment is perfect; it tracks straight down the road. The brakes and driveshaft are new. The transmission shifts well.

The interior is gorgeous. The seats are comfortable and the leather is supple with no rips or cracks at all. The dash looks perfect, with no cracks and no indication of UV or heat damage. The headliner was recently replaced and looks fantastic, with no sags.

The valve cover does not leak. The oil pan does not leak. There are no vacuum leaks. The cruise control works. The steering column vertical and horizontal adjusters work perfectly and the windows all roll easily. All gauges work. The heater fan works. The air conditioner has been converted to R-134a and blows cold. The pop up headlights and windows work.

Very rare: of the 4,194 BMW 850i’s that were imported to the USA and Canada, only 55 had the Brilliant Red exterior and Parchment natural leather interior color combination.

This car is a looker! Between the gorgeous body design, the brilliant red paint, and the custom wheels, this car gets A LOT of looks, smiles, and thumbs up, both when parked and when driving down the road. The body is in great shape. It is an Arizona car with ZERO rust ANYWHERE. It has never seen salt, and it has seldom even seen rain. No accidents. No dents. Not even any parking lot dings. No chips in the flash-to-pass lights nor the pop up headlights (glass lenses, not plastic!). Underneath, there is no rust or discoloration in the spare tire well, nor anywhere on the car.

When I bought the car last fall, the paint had been badly dulled by the Arizona sun. I had the entire car completely repainted, not because there was damage to cover up (there was NONE!), but rather because it’s red, and red fades, especially in Arizona, and this car had been buffed down too many times to buff it anymore. So now it looks fantastic driving down the road sporting the original brilliant red color it had in 1991.

The stainless steel Magnaflow mufflers have a slight growl so you can hear the V12 without being obnoxious, and they don’t “drone.”

80% of 850i’s came with a four speed automatic transmission, and this is one of them. Don’t let that turn you off. Most car-magazine articles back in the 1990s preferred the automatic transmission because it drove more smoothly than the stick. So this car is actually more “driveable”, and it’s also much more affordable (the manual transmission 850i’s sell for at least $10,000 more than comparable cars with automatics.) The rear end is geared lower than the manual transmission cars, so acceleration is just as fast, if not faster than the stick version. A rare Dinan transmission chip (NOS, no longer available from Dinan) was recently added to this car that significantly improves the shift points.

If you want even better performance, for $500 you can get a set of Wokke engine management and throttle control chips that increase power 10% and eliminate the top speed governor. Together with the Dinan transmission chip already in the car, adding the Wokke chips would really wake up the V-12.

The tires have some tread left but my understanding from the previous owner is that they are quite old, and they do show surface cracks in the sidewalls, so if had I kept the car, new Michelins were next on my list. The sunroof slides forward and backward flawlessly, but does not tilt (it probably got messed up when the new headliner was installed). The passenger seat adjustment works perfectly, and the driver’s seat moves forward and backward and the back tilts properly, but the driver’s seat up/down adjustment does not work (one of the cables is faulty, but it is in a good position). Finally, like all E31’s, there are some dead pixels on the OBC display, and the CD changer in the trunk doesn’t work. Other than those things, this car is in great shape.

The reason I’m selling this car is because I already have an 850i and I bought this one for my wife, but as it turns out she wasn’t as excited about the car as she and I both thought she was. She enjoys riding in mine but she doesn’t enjoy driving one. So I guess we’re a one-E31 family.

Serious inquiries only. Cash only. No trades. No low-balls. This is one of the finest vehicles ever made in history by any manufacturer, and it is also one of the most beautiful and rare classic BMWs on the road, for a very affordable price. Don’t miss out on this opportunity! For many years the E31 has been a bargain in the used car market. That won’t last. Until recently, the E31 has been relatively unknown and undervalued, but according to Hagerty’s, prices have been trending upward in the last few years, especially for the V-12’s, as collectors and enthusiasts have started to recognize its gorgeous classic look, its excellent drivability, and its place in automobile history as the best touring coupe of its time… or of any time. 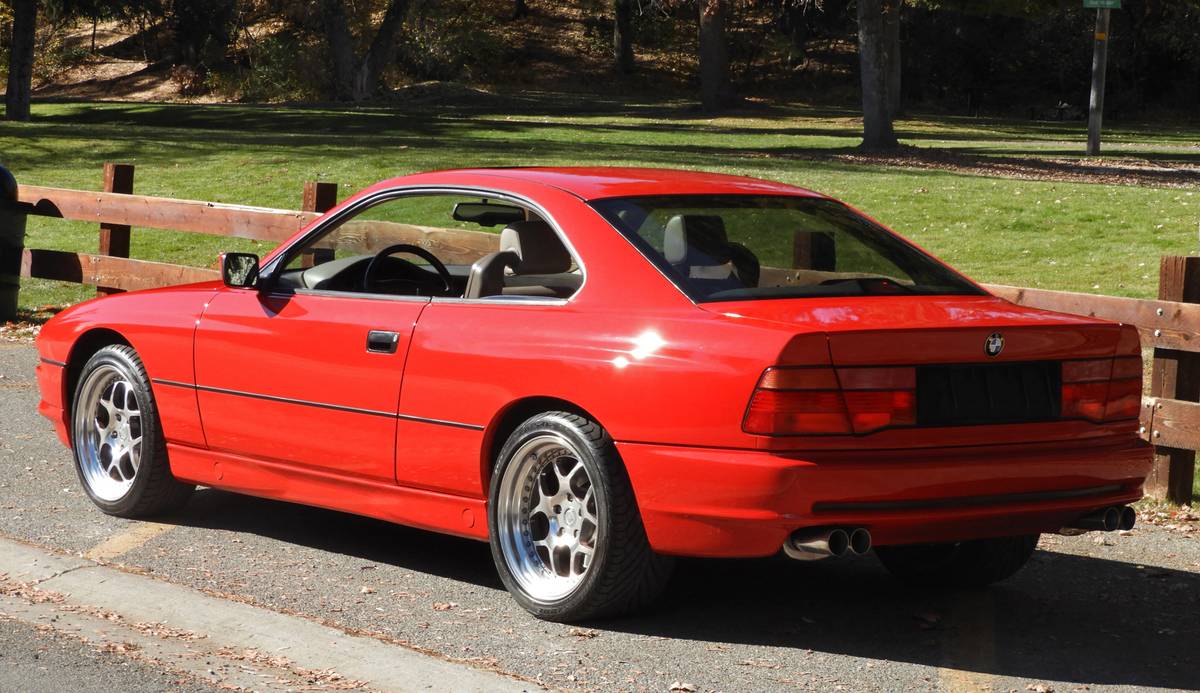