Miscellaneous Ramblings and Musings From The Coronado Speed Festival

-by Hunsbloger: I miss Andy Rooney on Sunday nights.  As I get older and my eyebrows are starting to look more like his, I’m beginning to understand how certain things just caught his attention, even though they escaped the notice of others (Squirrel!)  Vince gave a more complete account of the races, so I figured I’d pry the microphone out of Andy’s cold dead fingers to point out some of the things that would have otherwise gone unnoticed.  (Feel free to read in his voice)

Someone having taken the time to get up extra early in the morning, drove early to the base, paid extra to get their car parked in  the car show area, only to leave it protected from the admiring gaze of the public…by leaving it under cover all day. Don’t waste your time trying to decode the model of car cover as it was made by the now defunct North Coast Tarpaulin Works and there is no online catalog. 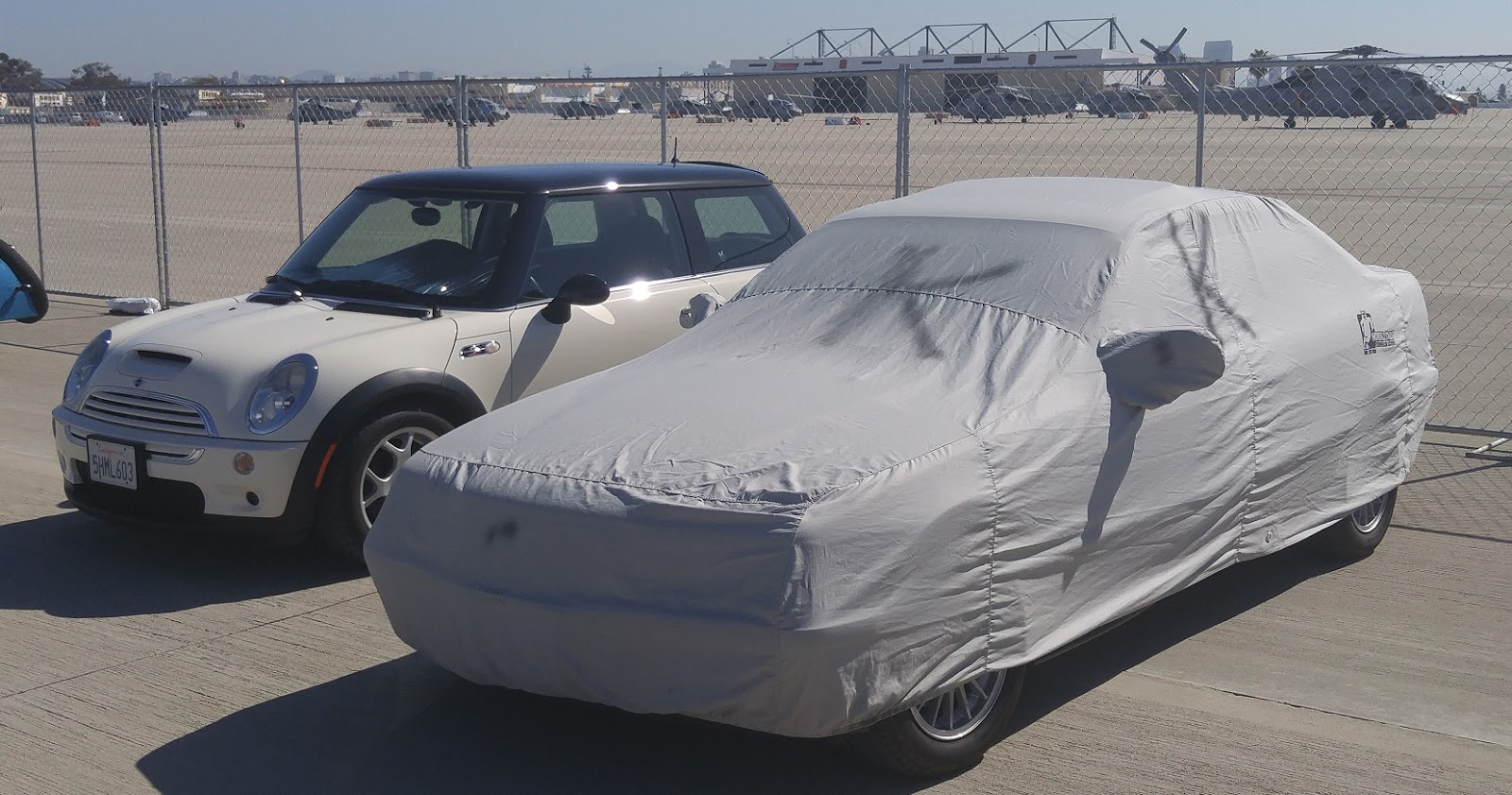 “There’s Always Gotta Be A Buick”

Actually someone figured that the combined price of a (’53 Buick Special 2 door + Sawzall + LT1 + Body Filler + Custom Paint) < (Restored ’53 Skylark) and yields an car that is more driveable (when its not raining) and draws just as much attention from a crowd, even if that crowd is less informed about Buick’s 50th Anniversary, or the return on investment from collectible cars vs. custom builds. 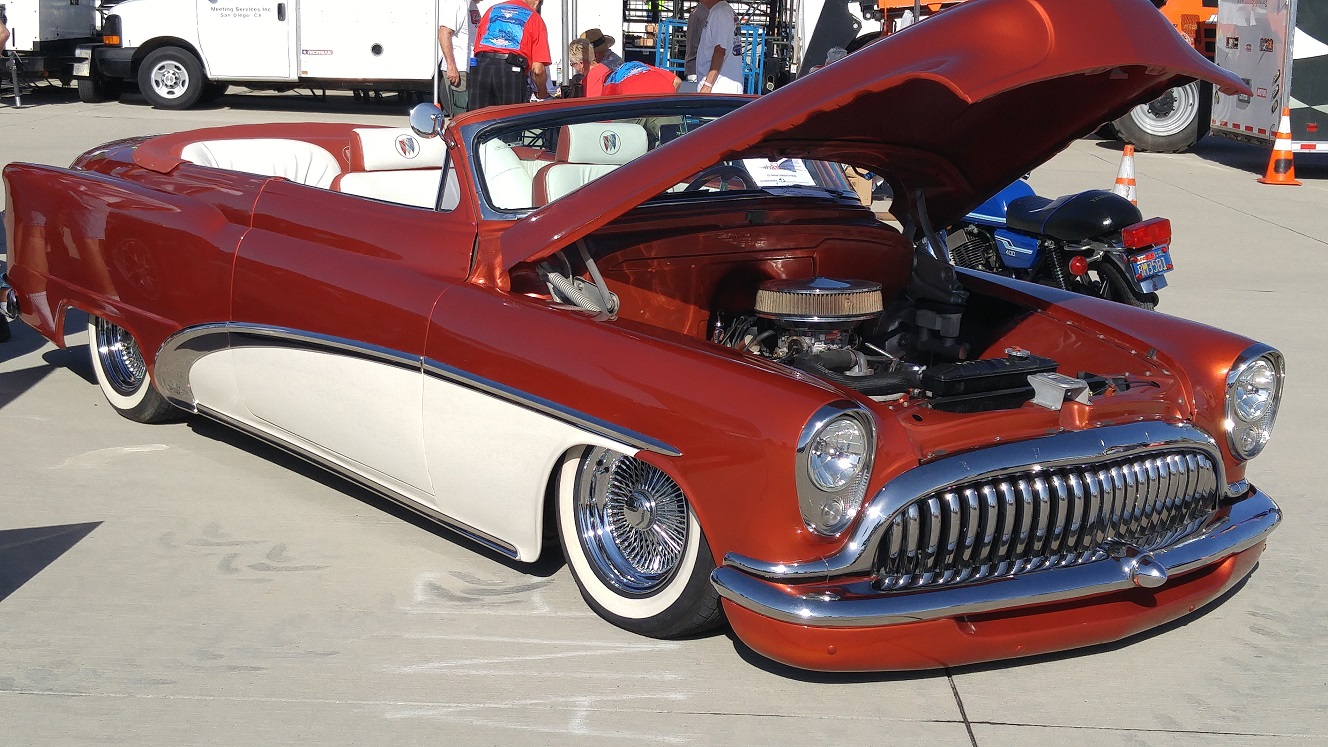 Having built a really nice Mustang Fastback which was picked up by a national magazine, I know how much time it takes to build a car that truly stands out.  I also got to know the Mustang community really well as part of that process.  They’re eager to help and they’re also eager to tell you just exactly what you “should” do with the blank canvas that you call “your” car.  This happens because there are so many Mustangs still rolling around that one has to really do something incredible to stand out.

You’ve seen it in Craigslist and eBay a million times.  Someone slaps an Eleanor paint job onto their old beat up Mustang and they figure they’ve just turned it into a Pro-Touring car that should command top market price.  Within the Mustang community, starting with Chip Foose’s Eleanor, Troy Trepanier’s Fast Forward Fastback that was built for EBay, and the multiple Mustangs that the Ring Brothers have built for their clients to take to Autorama, there have been some truly remarkable Mustangs that have raised the bar for the d-i-y Mustanger.  The builder of this ’66 Fastback has stepped up to that bar on what I suspect was a much tighter budget, but to great effect for this Pro-Touring ’66 Mustang Fastback. 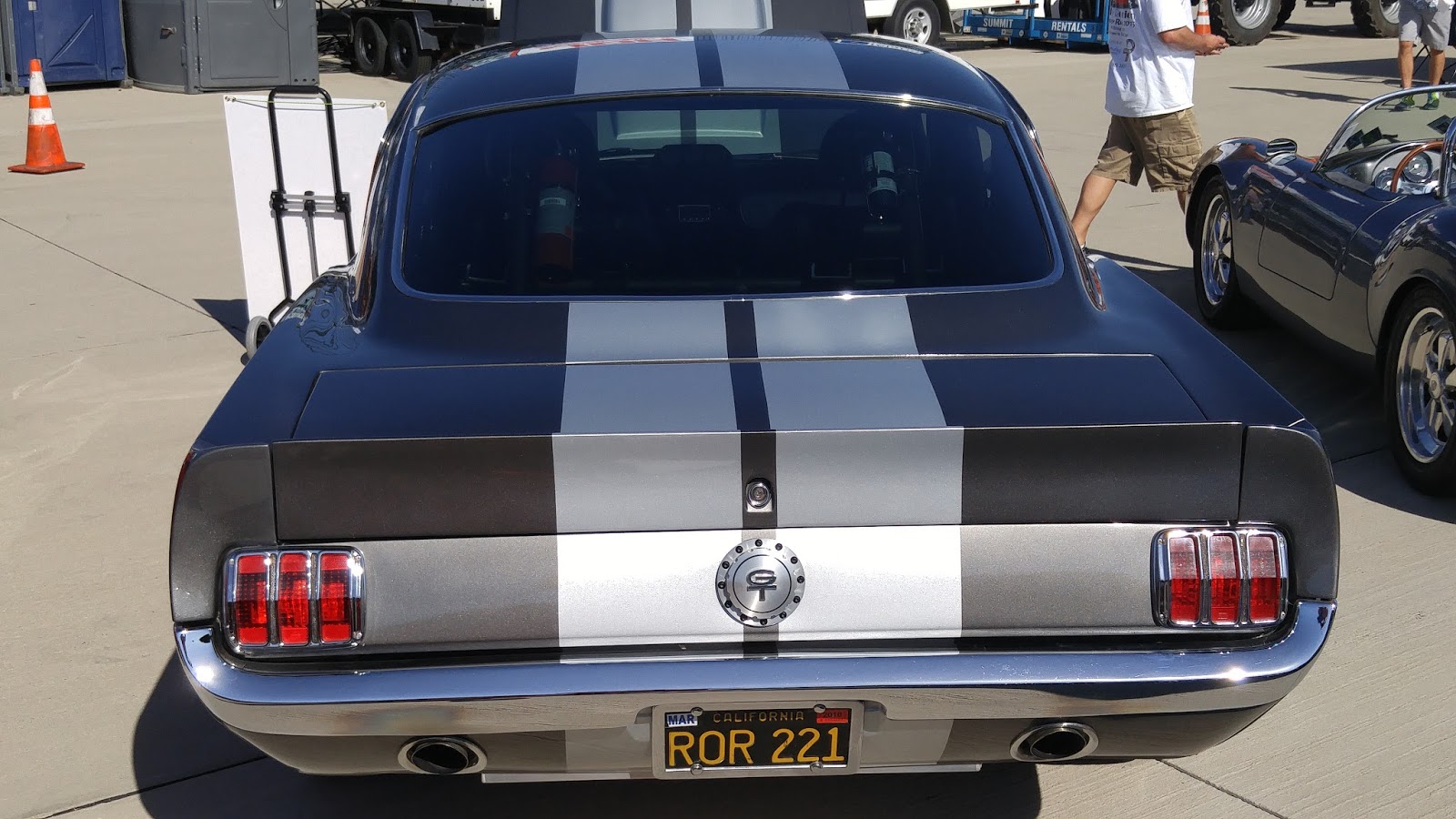 I’ve never met the builder of this car, but I’d like to as he seems to have done something that many others fail to do; he did a lot of his work on pencil and paper before he started in. The degree of planning that went into this car cannot be captured in a couple of pictures, but I hope to give you a feel for it based on some of the key points highlighted below.

When Shelby built the first GT350’s, he opted to elminate the fresh air intakes in the B-pillar and insert a window into that space.  This space has remained a trouble spot for a lot of builders. The Ring Brothers went concave with it for their ’67s, but this builder took a more European approach to it by just filling it in to smooth the lines out.  It looks so natural on the car, I suspect most people wouldn’t even notice it.  I doubt it has any real impact on interior air flow. Even if it does, any negative impact is more than overcome by the modern A/C unit! 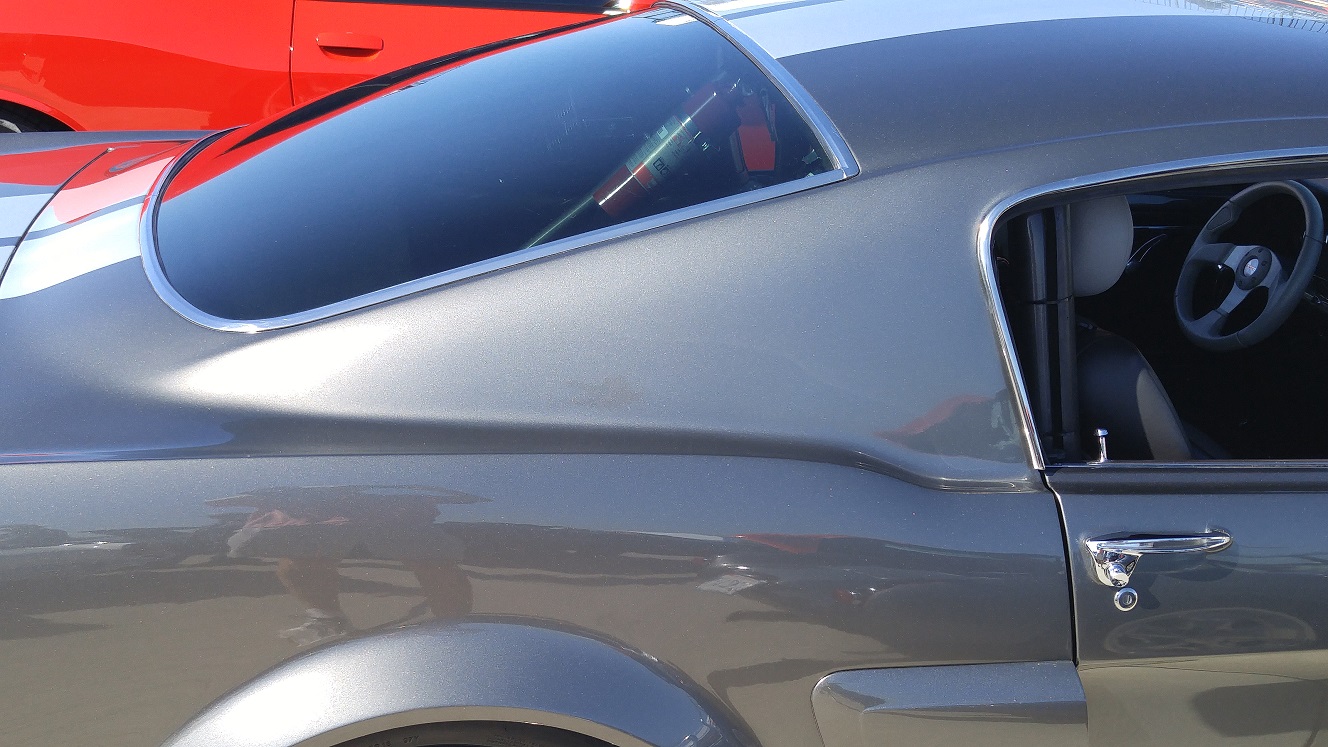 Fender flares, whether steel, fiberglass or carbon fiber are always a dicey proposition as they are such a subjective addition to the car.  However, if one can point to any additional functionality, it goes a long way in getting the viewer to accept it.  I’m not sure what they’re made of, or how much air really will be redirected from the wheel arch (although I’m sure that whenever we finally get some rain here in Southern California, I’m sure they’re look something like a 50’s hot rodder’s painted flames). Either way, they sure play well with the more modern, stylized badging that replaces the more mundane ’60s script and keep the modern discs from being the primary eye candy at the front of the car. 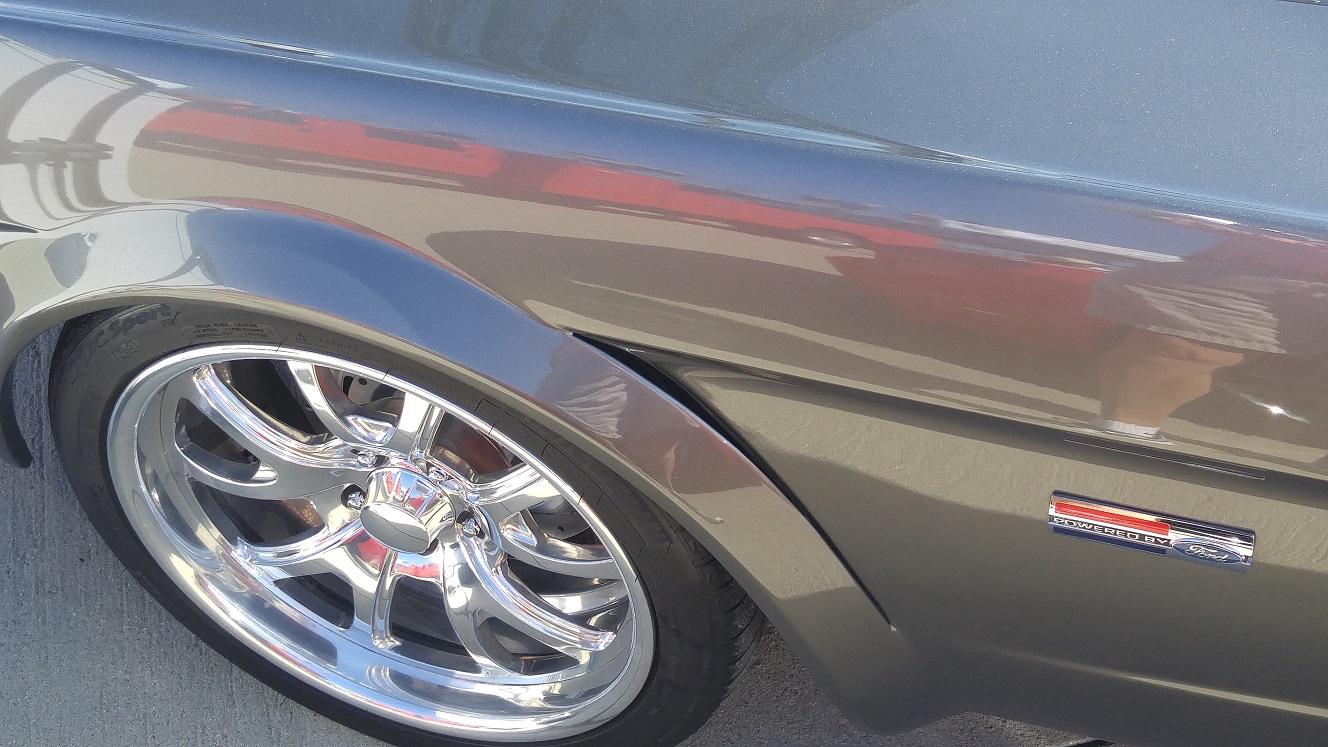 The instrumentation on any ’65-73 Mustang is minimalist at best.  My apologies to the owner for the picture below as it only captures a small portion of what he accomplished.  I tried shooting this from both sides of the car but couldn’t catch all of the gauges in one shot.  In addition to the tach-within a speedo which is barely visible above the steering wheel, he also incorporated an additional pod in the same way that Shelby did with the first series 350’s, just above the center portion of the dash; however, he also incorporated two discrete and far more useful defroster vents as well as the two 12v outlets, vintage A/C outlets, color coordinated dash and “modernized” radio, along with a console for a massive Hurst Shifter and two of your favorite beverages.  (I gotta give a tip of the hat to the street rodders as they were the ones who first figured out that if you’re going to spend an entire day in your car driving to a car show, you wanna be cool and well hydrated!) 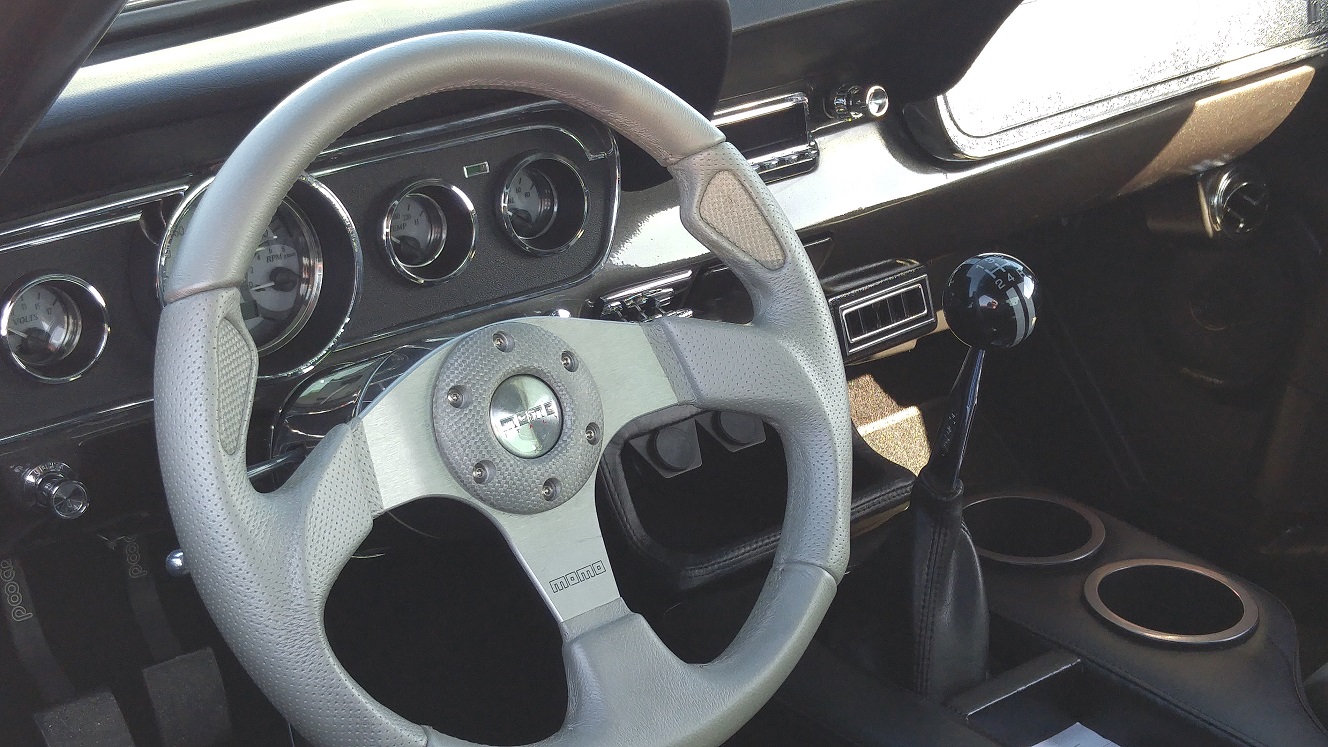 In the end, it doesn’t matter how cool it looks, it’s how well it goes (stops and handles) which takes us to the finale for this car.  Individual reservoirs for front/rear brakes and hydraulic clutch, a variable assist power steering, billet A/C bits, and more aluminum and ANR fittings than one can shake a stick at all driven by a very expensive serpentine belt system.  What cannot be seen is how well designed the cooling system is, even the fasteners on the fan shroud are high end. 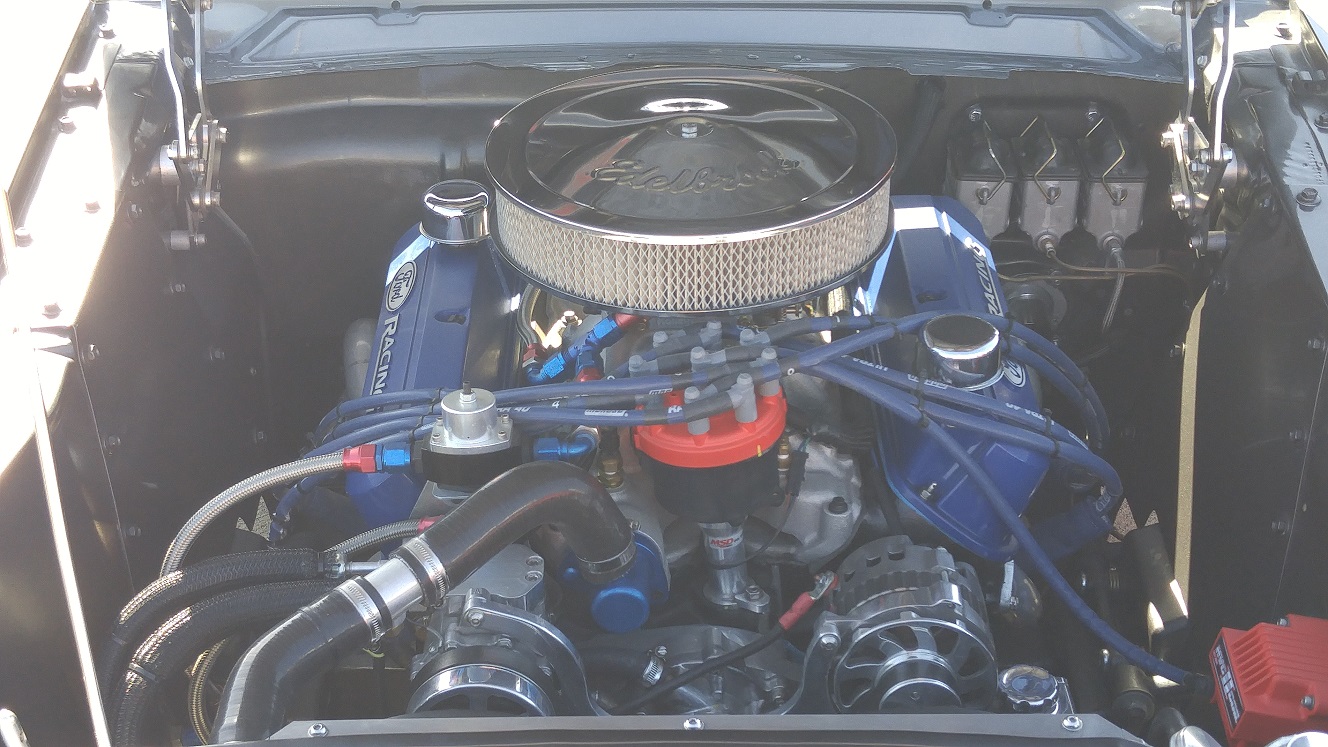 While certainly beyond the usual self-imposed DT budget as a turn-key acquisition, there are still enough Mustangs out there that can be purchased as builders which can be eventually turned into something like this. While you can’t own this for less than the price of a new Camry, it would be shame not to use it as a Daily Turismo.

How Not To Sell Your Car

I’ve been intending to do a series on some of the best ways to sell a
car.  There are certainly a lot of people at a car show, but one has to
take it just as seriously as when trying to sell at any other venue or
media.  In as few words as I can muster, but I’m afraid I’m going to
have to scream it in CAPS.

“DO NOT PARK YOUR CAR BACKWARDS ALONG
THE PERIMETER FENCE BETWEEN CARS THAT ARE NOTHING LIKE YOURS WITH A
$1.50 SIGN IN THE BACK WINDOW !”

Unfortunately, it was a pretty decent ’68 442 with a recent medium quality paint job. 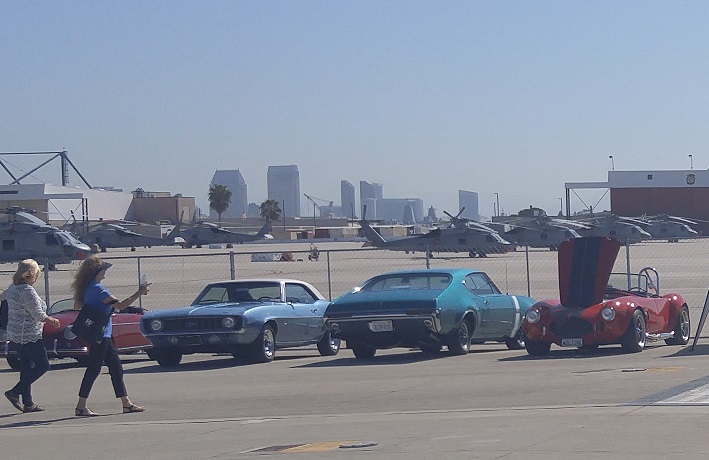 Find The Most Unlikely Corvair Powered Car At The Show 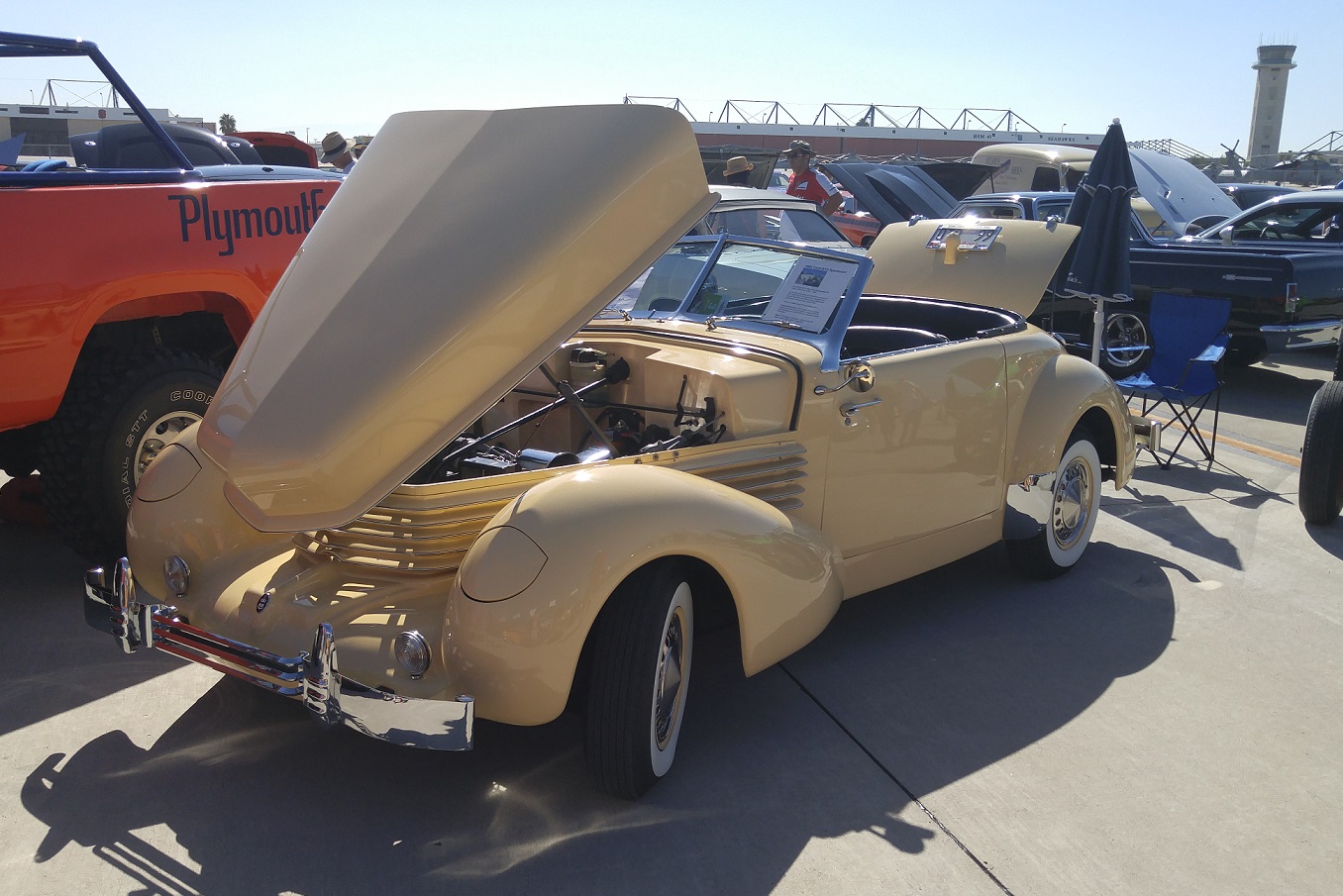 I was aware that there were some 8/10ths scale Cord 810 Tributes/Kit Cars built a while back, but I had no idea that there were some who held true to the Cord’s front wheel drive.  This car was not as cheezy looking as many kit cars (Ok the hubcaps looked like they were plates stolen from some 60’s UFO themed burger joint), but the real surprise was the decent fit finish of the basic kit and the Corvair 180-HP turbo flat 6 under the hood and utilized the same type of flexible steel tubing exhaust used on the original Cord.   This one would definitely fool many for far less than 8/10ths of the cost of an original Cord, which at one point in the not too distant past was one of the most desirable collectibles to acquire. 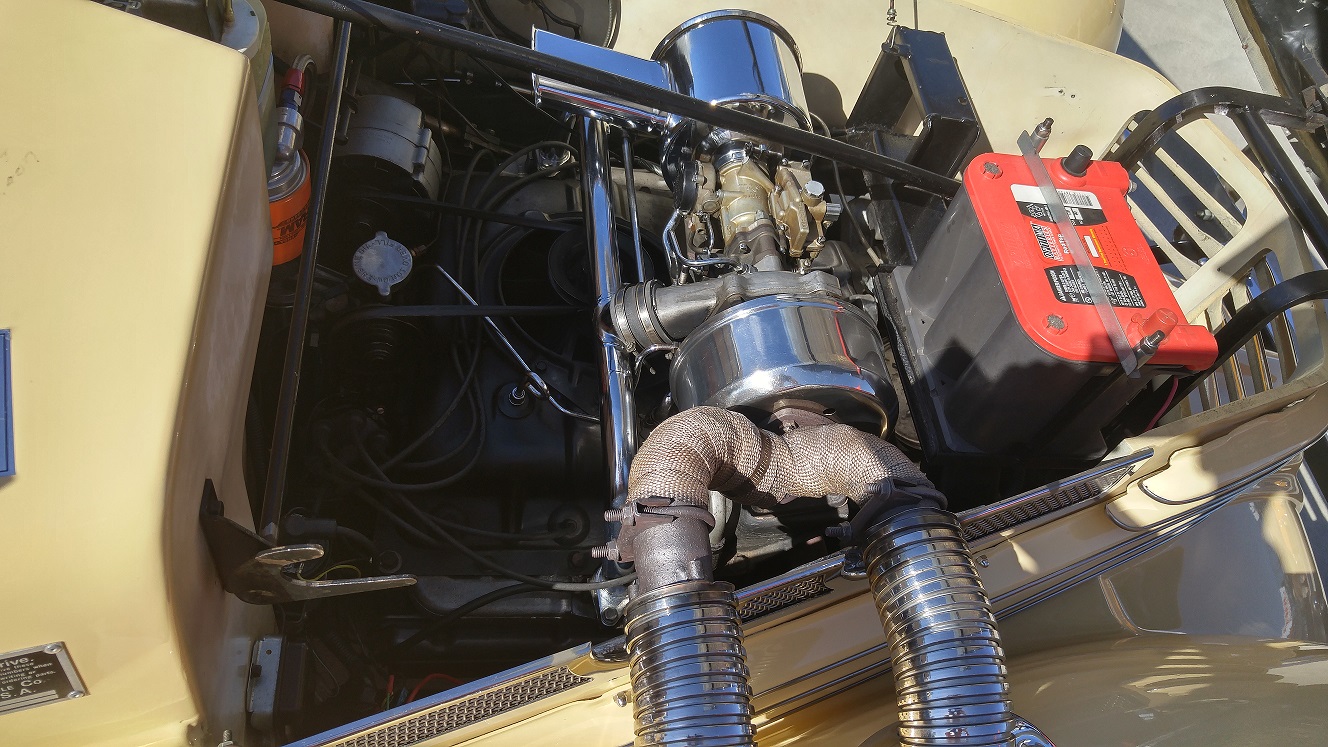 Who Was First To Introduce Disc Brakes In Production American Cars?

I was thrilled to take part in last week’s 10th Episode of the DT Radio Show in which we cussed and discussed the painfully slow adoption of 4 wheel disc brakes into American cars.  We waxed nostalgic about early Jags and forgot to mention the random 1931 Nash.  If you look closely in the picture below, you can see that this ’31 Nash has front disc brakes 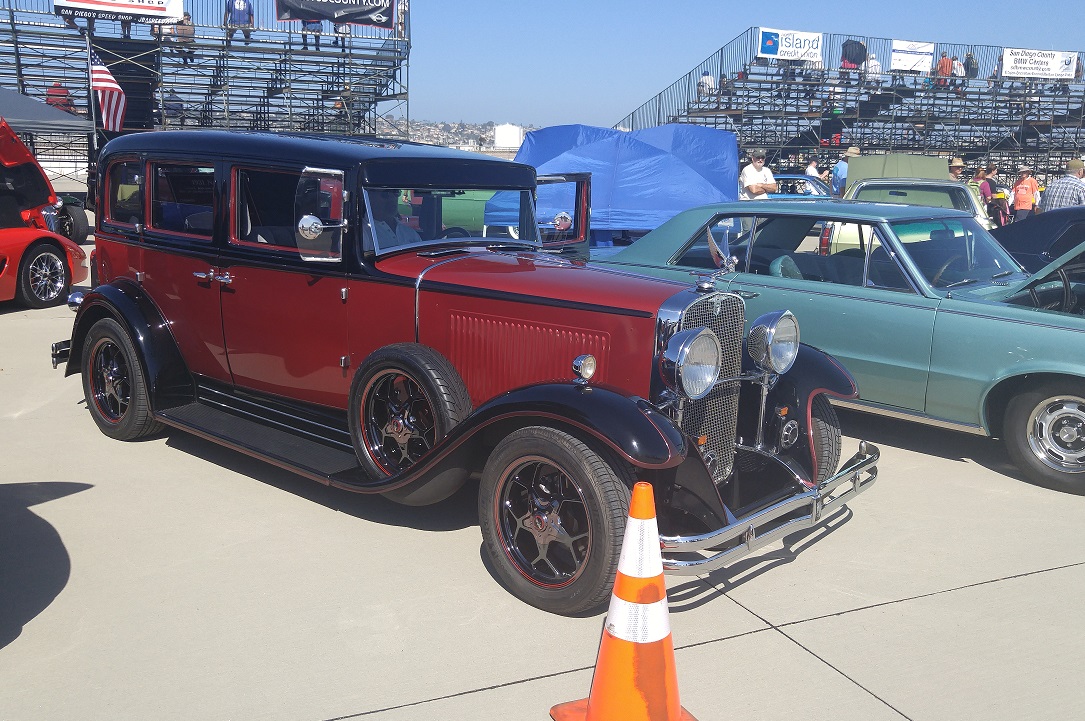 I’m glad I saw this car as it also shows that Nash beat Jaguar to the punch on the inboard rear discs! 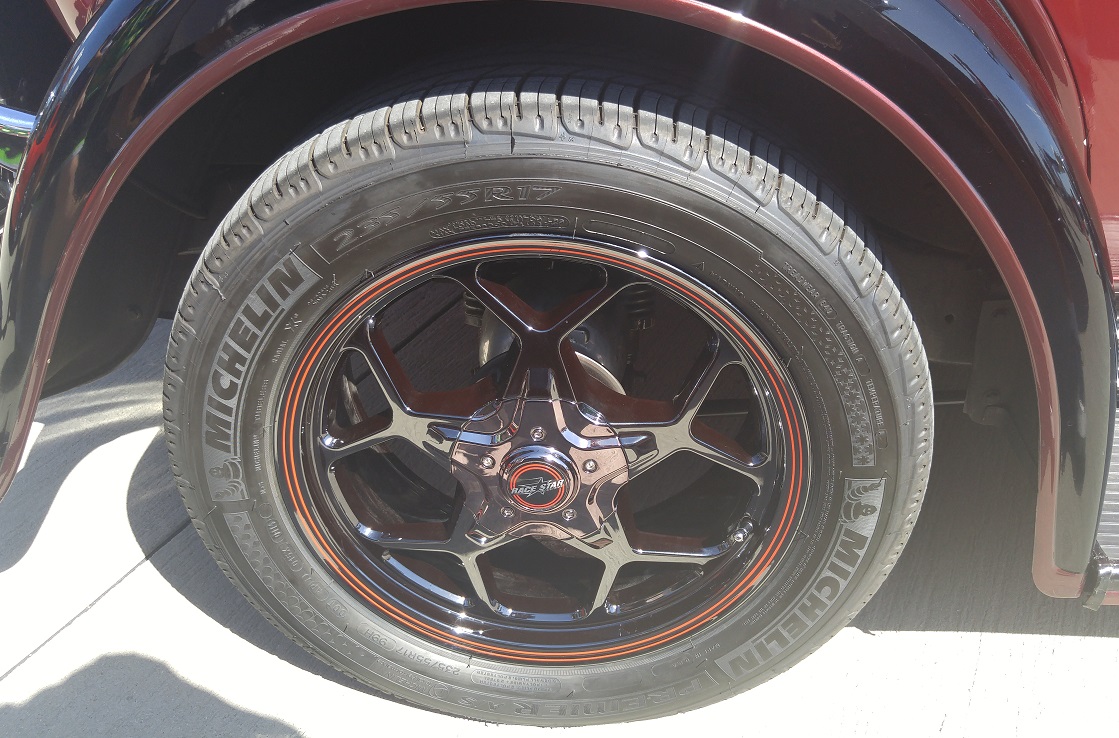 I spoke with the owner, who informed me that the car has an LT1 engine under the hood which means Nash apparently beat Chevy to the punch on that one too!

See what you can learn, if you just pay attention, when you go to the Coronado Speed Festival!

See something special at a local car event, email us here: tips@dailyturismo.com

Stay tuned for a full feature write-up with pictures of the on-track action.