The long time owned 1972 Datsun 240Z featured a few days back was picked up by DT reader/commenter Ryan M who sent us a very nice and detailed follow up, which is published here in its entirety.  Thanks for the pic and update Ryan!

I started my Z hunt in December of 2013. Well, let me back up. I
started my Z hunt in 1991. This was the year that I became aware of
them through my uncle who had a few he used to race. Being a 10 year old
on a limited budget was prohibitive to purchasing cars however, so I
stuck with Hot Wheels and Matchbox until it became financially viable to
go after the real thing. 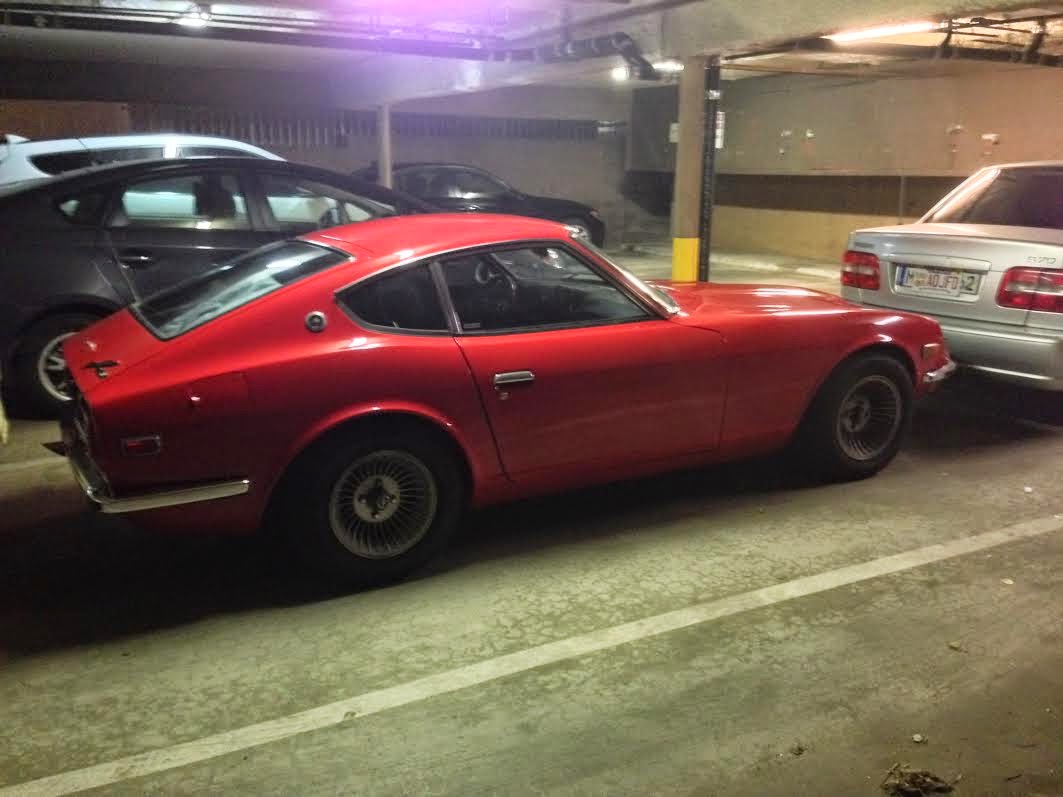 In December of 2013 I finally offloaded the last of my still-depreciating weekend cars and the CFO of the household decided I was clear to pick up another basket case.

So the hunt was on for a 240Z/260Z. I must have seen 10 in person, ready to buy, cash in hand before finding this car. All of the others had some major problem, that combined with their price made them undesirable. I could write a book on some of them, and the characters I met cruising Craigslist in search of affordable Datsuns.

Admittedly, I had been tracking this car long before DT posted it – back when it was $6000 and had fewer pictures. I was being selfish, it was my “safety net” car. It was close, looked nice, and it was about $5000 below my budget. I didn’t want to share it with DT, so when I saw it grace these hallowed pages, I got a bit nervous that someone was going to grab it before I got the chance.

After running every possible S30 lead to the ground from Santa Monica to Las Vegas, I finally contacted the seller and set up a showing after work. I don’t buy cars in the dark and naturally I arrived just as the sun went down. So I just spent the hour or so shooting the breeze with the owner and inspecting via flashlight.

We shook hands and I left but promised to return in a few days if he still had the car to see the paint during the day.

The few days came and went, I called and he said he still had it, so with the sun up I headed to Pasadena with the wife and the 4Runner to take a look.

Here is a list of faults / curiosities I came up with on initial inspection:

2. Paint about a 5 year old $1500 respray in non-original red. Not much overspray, not much on the rubbers. Needs some wet sanding/buffing in places but definitely a presentable driver paint job.

3. Thumbnail-sized hole in passenger floor board, looks to be from road debris, no rust present.

5. Small hole on passenger floor, adjacent to jack point – appears to be where the factory jack at one time slipped off and “split” through the floor metal. Yikes.

7. Engine & glass out respray about 30 years ago to California Orange (from factory lime green). In the process of doing this, they painted the engine bay a matte black but the prep left a lot to be desired and its flaking in places. Nothing a rattle can of black Krylon won’t take care of next time I have engine out.

8. Needs a battery hold down kit

10. Misc rubber bits need replacing throughout the car, including the window rubbers and tracks.

11. Engine oil leak “somewhere” on the front of the engine, think its the front cover.

13. Carbs desperately out of sync, timing way off

15. Needs new shocks all around

18. Exhaust leaks at #2 smog galley which makes the car sound like it has a nasty exhaust manifold gasket leak, which it essentially does. Can either weld, or cram a self-tapping screw in there to shut it up until the MSA 3-2 header goes on in 2 weeks.

19. Original smog equipment still present, accounted for, hooked up, in the way.

28. Original radiator recored 10 years ago, needs another recore or replacement.

32. Has accumulated enough spares over the past 32 years of ownership to fill a small trailer – or the entire back half of our 4Runner with the seats folded flat.

There’s a lot of good, but the above is just a small brain dump of what the car needs. There’s more, but I’m getting to that.

Anyways, the transaction went smooth, we agreed upon a price, shook the man’s hand and hopped in the Z with the title for what I was hoping to be a quick 26 mile drive from Pasadena to the west side.

Things were going swimmingly as I did what I typically do on any new car, which is to say I flogged the crap out of it as soon as the former owner was out of ear shot.

This thing was glorious. Sounded great, had plenty of power despite its obvious transmission deficiency, tracked straight and was generally free of the odd noises (save the rear diff). I was on cloud nine, visions of what the car would be like with the manual gearbox/R200 rear end installed were bouncing through my head as I watched the 4Runner’s headlights disappear in my rear-view.

With the needle approaching 80mph as I hit the 134/210 interchange, I noticed there was trouble in paradise. The car was having trouble maintaining speeds above 75mph.

No problem, 65mph is entirely reasonable, so I slowed down. I phoned the wife who by now had caught up, she said no smoke, no weird smells, flames etc, so I did another sweep of the gauges (oil pressure good, coolant temp good, amps solid, clock… still broken, fuel level good etc) and put my foot back down to hopefully clear out whatever was causing this. No joy. Putting my foot down actually stalled the engine. Releasing the throttle brought the rev’s back however.

At this point it was having trouble maintaining 55. No amount of fiddling with the choke or mucking about with the throttle was doing any good. Before I knew it, I was barely doing 35.

I barely made it up the off ramp in Burbank and into a parking lot before it was no longer able to maintain forward progress at all without cutting out.

I turned the car off to see if cooling it down would do anything (remembering vapor lock issues in some early 240’s). After 5 minutes, it fired right back up and I took off down the road again, this time on surface streets. It seemed to be running great. The feeling of euphoria was slowly returning, and I chalked that stalling episode up to the car not really having been driven much in the past decade.

That feeling lasted approximately 10 minutes before I was once again on the side of the road. This is where I realized my hazard switch was broken off. Ventura Blvd in Studio City on a Sunday night is mercifully quiet, so I did the drive, stall, cool off, restart, drive dance for another 10 minutes before I finally called Hagerty for a tow. Shameless plug for Hagerty: not only will they insure your classic and give you actual agreed upon value if its totaled or stolen, but they’ll also give you 4 free tows per year.

Anyhow, in true DT form and for the second time in as many months, my neighbors were greeted by a flat bed tow truck and all of the wonderful lights and sounds associated therewith at 11:30pm on a Sunday.

I’ll probably get a(nother) letter of reprimand from the property management people, and I’ll probably get a(nother) strongly worded passive aggressive note on my windshield from my chicken-s**t neighbors, I haven’t a clue what’s causing this stalling issue (leaning towards crud in the fuel system or a collapsed hose somewhere), and I’ll probably end up spending more money on this car in the near term than if I had just bought a running stick shift car to begin with, but none of that matters… what matters is that there’s a 1972 240Z in my parking spot, and it’s mine.

I’ve been waiting for this moment since 1991.

I’ll periodically keep you posted with progress and more pictures, but all I have now is a shot of the car behind the S70 in the carport.

Drove the car to work this morning and, after another stalling episode, I decided to remove the gas cap to see if that would help anything. There was a significant amount of vacuum holding it on, and afterwards with the cap off the car drove fine.

After Z-Bash  I’m going to start working on it. Not sure if it would add much to the site, but if you want I can drop an update every now and then.

[DT Ed Vince] Of course we always appreciate updates on cars purchased through this site even if it is “my wife divorced me because I bought a third 1800ES…I’m going to kill you guys.”

An improperly vented gas tank sounds like the root cause of Ryan’s stalling issues and it should be an easy fix – and you can buy vented gas caps to work properly with older cars.  Lastly, the license plate issue can be fixed one of two ways – first the legal way, go to CA DMV website and order something called a Legacy Plate, it is a new program current under way to give classic car owners the chance to buy new yellow/black/blue plates for their old cars, but the plates won’t ship until sometime in 2015.  Can’t wait?  The other way to do it is to buy a used set of blue customized plates that are out of the DMV system.  Then order the exactly same customized lettering in the current plates and when they arrive just stick the stickers on your used blue plates and drive around!