The Daihatsu HiJet is Japanese built micro van that has been a solid
entry to the Kei-truck scene since its introduction in 1960.  Daihatsu was on their 7th generation by the time this Van was released into the wild, but they were still designed with city transportation requirements in mind and a top speed that won’t make you happy on any modern highway….unless you find a HiJet that is powered by a Honda GoldWing motorcycle engine.  Find this 1989 Daihatsu HiJet Van offered for $4,500 in Port St. Lucie, FL via craigslist.  Tip from dascpcu. 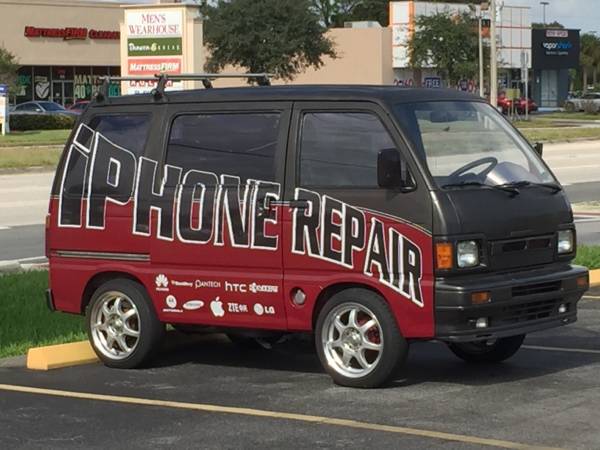 Today’s HiJet has gone under the knife and is powered by a 1.8 liter flat-6 that makes 125 horsepower according to the seller (which is hilariously close to the size/power of an original 911 engine) and is mated to the Gold Wing 5-speed sequential gearbox with electric reverse. A few youtube videos show the HiJet in action, and once you remove the iPhone repair paint/wrap scheme, this thing will be awesome.