This is a 1964 Value-Vette. The Value-Vette wasn’t a special Chevrolet model in 1964. However, it is a very specific model that can only be created by a series of owners and used car dealers who have handled the car in the 49 years between its original assembly and arrival here on ebay. This is one of those cars that exemplifies the DT Axiom “There is no better money spent on a car…. than the previous owner’s!”  According to the seller’s feedback, he has sold a couple of Corvettes and other, similar types of cars, to what appears to be a group of satisfied and appreciative buyers.  Some commented on receiving great bargains and values.

A Value-Vette isn’t for everyone.  It’s a special car for that discriminating buyer who just wants a driver; as opposed to the Bloomington Gold Certified 1967 Marina Blue with Blue interior, factory air, telescope wheel and electric windows equipped car that he’s been dreaming about for decades.

1964 Vettes are nothing special (to me).  They carried over the side strakes of the ’63’s, but did not have the big chrome fake vent panel inserts in the hood.  The 1964’s were more significant for the coupes, as they were the first without the split rear window. 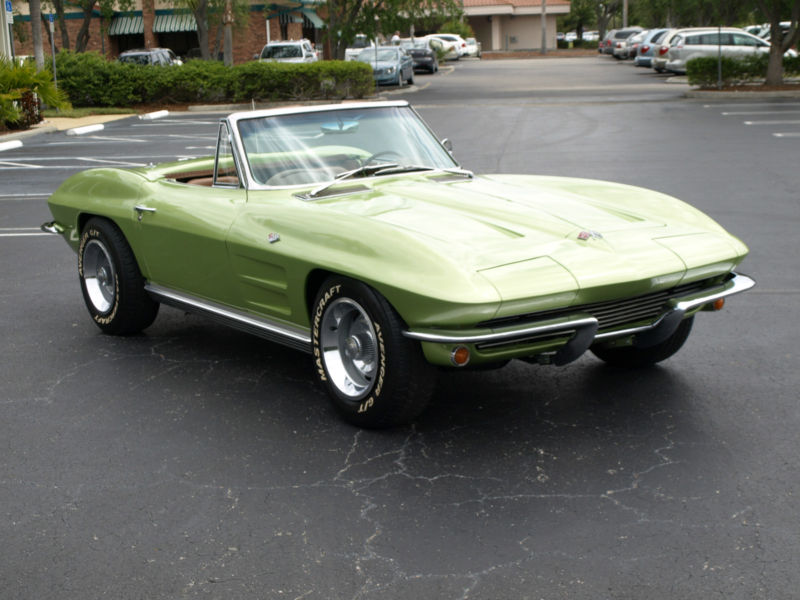 As this seller has sold Vettes before, he certainly knows that they require a lot of documentation to draw in the really big money.  This car has several people viewing/watching but with 2 days left to run, its price has stalled at $27,000, which is pretty close to what I believe the car should ultimately bring. Why, because of the information that has been left out of the add…and for good reason.. There’s no mention of this being an original or even matching numbers 327/350 engine and 4-speed.  There is no mention whether any of the body panels or key components have been replaced, and its non-original in its overall appearance. Welcome to Value-Vette-Land! 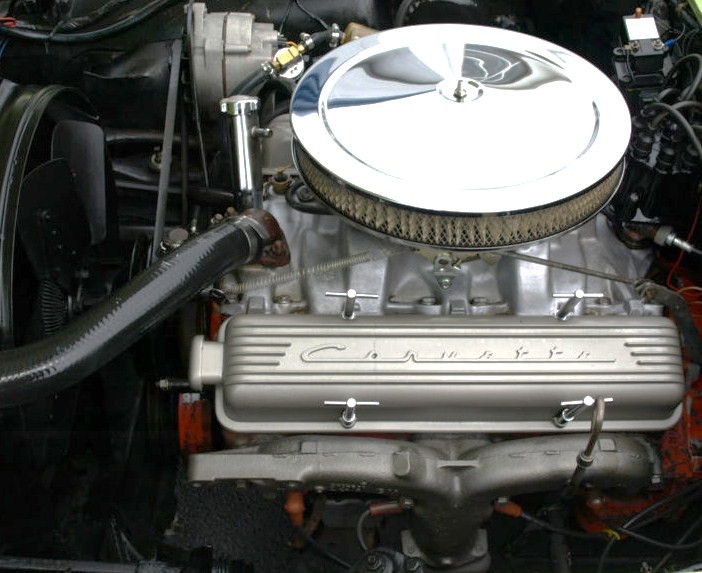 Equipped with a 327/350 4-spd makes it an eminently drivable Vette.  The beauty of a ’64 327 is that no one is expecting it to be a big block, because the big blocks weren’t available in 1964.  These 327/350’s pull really well through a close ratio gear box. As ideal as this engine/trans combo is, the seller does not mention anything about this being an original or matching #’s engine, same with the transmission. This omission speaks volumes to serious Value-Vette shoppers. 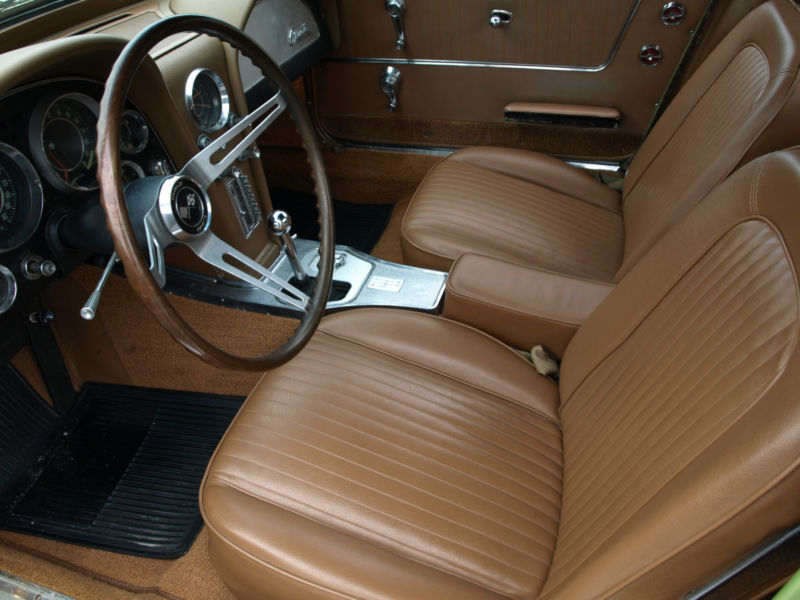 The interior has been redone in a color that would have only been
originally available in a Saddle Tan or White ’64.  The seats covers look fairly inexpensive for some
reason and a glance at the top of the passenger’s seat back indicates a wee bit of waviness. All things considered, the saddle interior looks really good with this particular shade of green and with all the
carpeted areas having been taken care of there is nothing that needs immediate attention.  (There appears to have been
something spilled/leaked through the rear edge of the top cover which may or may not have created a permanent stain.) 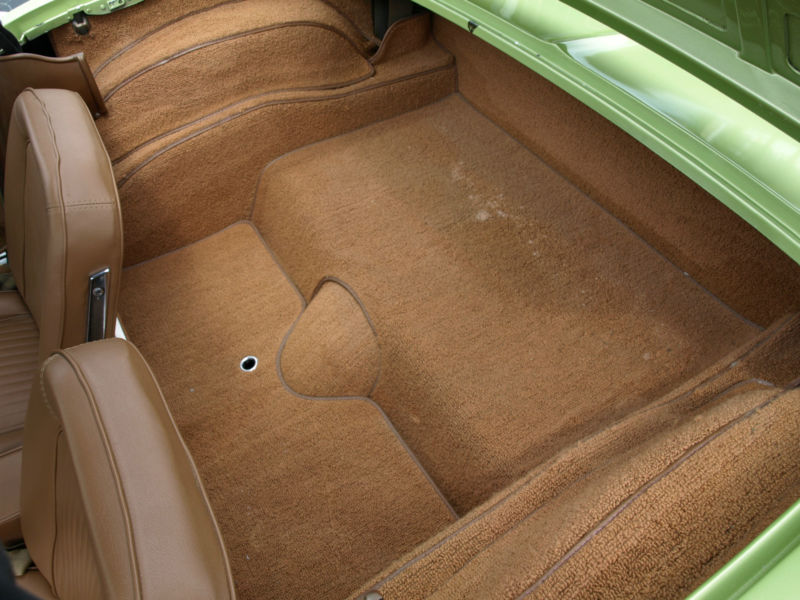 Color:  I normally HATE this ivy green (that’s why I painted my ’67 Mustang Fastback) but a lot of people really like it.  Its a non-stock color (they’re in FL so I guess it’s key-lime green) which means the seller has to find one of those buyers who really loves it; because, no one else will pay top dollar for a non-stock, color changed car.  That cuts the field of buyers way down, which is good for the next owner as it keeps the price down.  The paint looks decent, the seams look decent but again.. not much mention other than the color was changed.  No mention of any body panels having been replaced, etc. 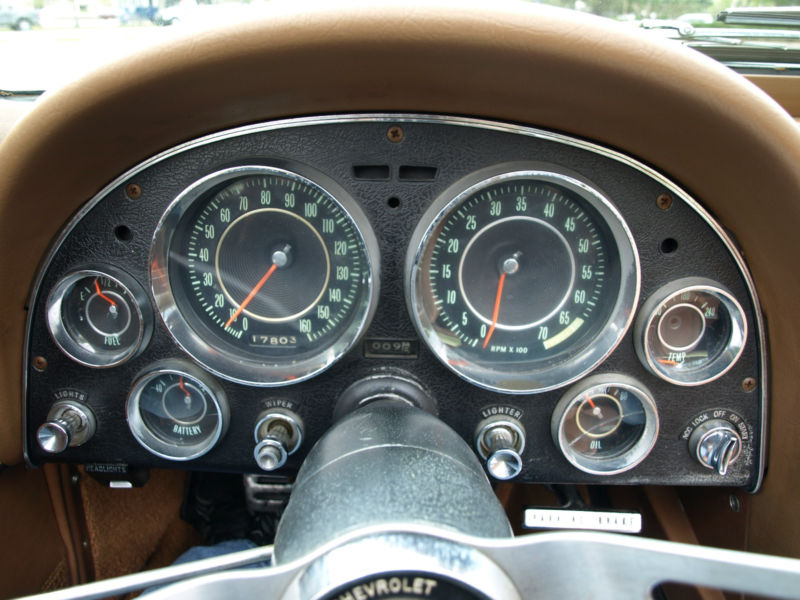 Interior: Look at the instrument panel, its unrestored and could have been really improved with a careful respray of the black camera case finish, or even a better picture which shows the steering column a little better.  The gauges are appropriately faded, but not horrible.  Just not as nice as the paint and the interior would seem to suggest.  Also, peaking up from the floor we see at least a clutch pedal with no pedal pad on it.  That omission, again costs the seller $Hundreds$ when this is the first/only impression of the car.

Tires/Wheels: Seriously?!  Private label, Raised White Letters Tires on a Vette? The seller could have flipped these $90 beauties black-side out and gotten a higher price of the car! As a seller, never put 15×8 Rally wheels on any pre-68 Chevy! As a buyer, these will work just fine while you shop for something more appropriate with the $2,000 you just saved on price. 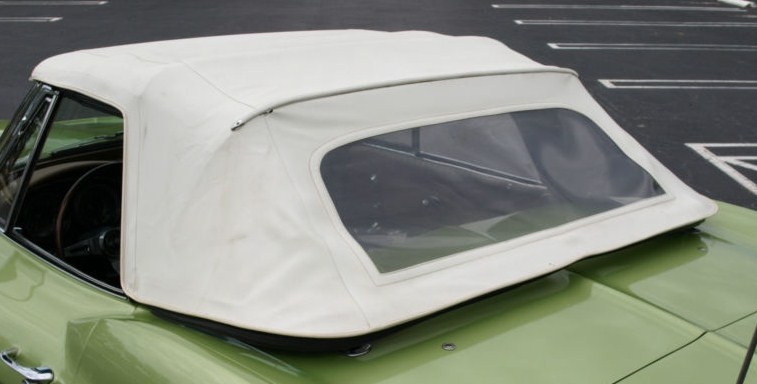 Top: The top isn’t completely latched in the picture shown (rear latches haven’t caught, but full props to the seller for disclosing the two small holes at the external top bow.  This is another great value-maker issue; the seller is forced to reduce the price to compensate for a top that will be up rarely if at all as most people will use this as a sunny-day car, so fuggedaboutit!! This is one of those items where gluing a patch from the inside may be all the money the new owner should spend on this item.

Location.  The car is in FL so its a fairly expensive haul to anywhere
in the country unless you live in a Northern tier state and can
catch a ride with one of the snowbird haulers next month. 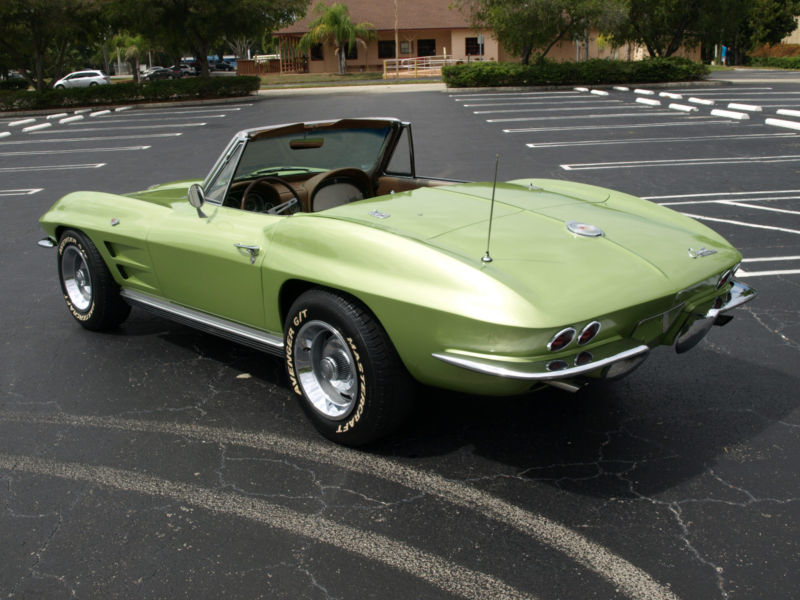 Long story short, the previous owner spent some time making this car look this good.  Look at the pictures and notice that the paint appears to have good depth and the openings all appear to be well fitted. This is being offered by a solid ebay seller with a reputation for fairness and good deals.  He seems to knows his Vettes and isn’t trying to represent this car as something it is not (STOCK).  Instead, recognizing that this is a Driver Quality Vette, its being offered without a reserve.

Without the benefit of calling the current seller and asking a number of questions, I’m going to stick my neck waaay out there and suggest that this car will finish at approximately $28-32K.  I say that because, as the more serious buyers start to investigate this car, they’ll start to weigh all of the non-stock/standard equipment and minor little imperfections against their dream of owning their first Corvette. 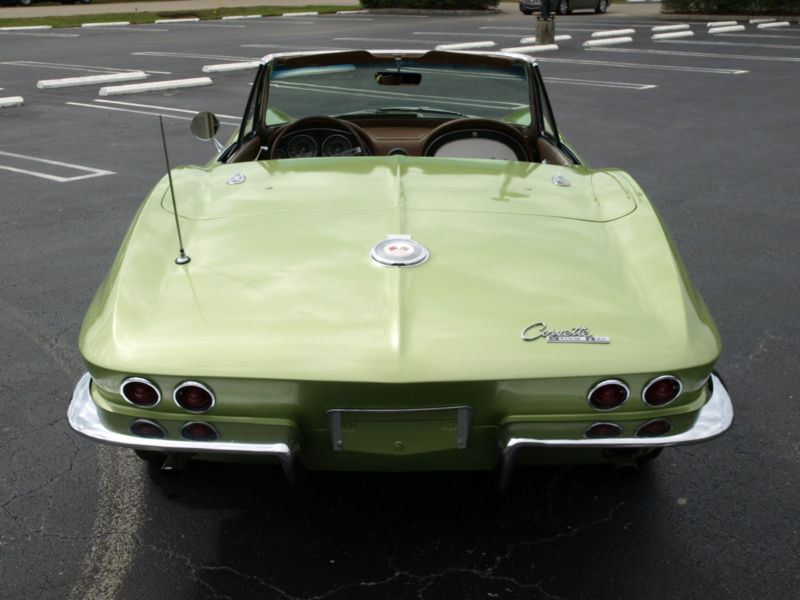 If you want a nice looking Value-Vette, this could be a great buy up to about $32K.  The overall Corvette market is much higher, but this is not a car that is likely to show up at Mershons or any other well known Vette-Shop.  One has to sift through a lot of Corvettes to find a true Value-Vette. We would advise anyone considering bidding on this car to call and ask the seller lots of questions.  Then, write down your top dollar on a piece of paper before you place your bid and Never Budge Above That Number You Just Wrote Down, no matter how emotionally attached you’ve become to the car or how many other bidders are in play. This is one of ebay’s private auctions, so we’ll never get the whole story about who the bidders are and whether or not the car actually changes hands as a result of this auction. The first 8 bids on this car only brought  car from up to $7,000, with the 10th bid taking it over $20K.  If it goes over $32, then it’s probably time time to seriously consider either a different Value-Vette or stepping up your price point for a more original car.