The RX-8 was Mazda’s replacement for the out of production RX-7, introduced as a last chance attempt at saving the rotary engine.  The RX-8 was built starting in 2003 and ending in 2011 when the lights went out on production of Felix Wankel’s spinning machine…for now.  Anyway, the RX-8 rapidly gained the a similar reputation to the RX-7 — specifically that it was a great car to drive, but the engine blew up faster than a Miley Cirus relationship — which was around 62 minutes after the first spark.  So if you want to drive an RX-8 without worrying about your apex seals, you should swap in a Ford inline-6 from an F150.  Right? Find this 2004 Mazda RX-8 with Ford inline-6 offered for $1400 in Minneapolis, MN via facebash marketplace. 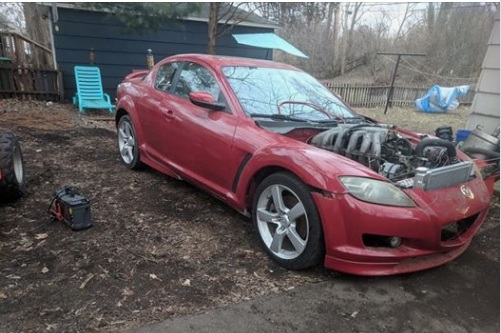 This is your premium model rx-8! Guaranteed never to break down (again) with it’s stout Ford 4.9 Liter powerplant backed by a 5 speed transmission. The interior is pretty much perfect, it has everything you need except a stereo and cup holders.

-Interior was gutted except for seats, door cards, and a steering wheel (before me)

In my ownership I’ve replaced/added:

-fuel return line… It didn’t have one

It runs and drives, and is a welded diff and minor refreshments away from being a great drift car. I was going to build this and drive it, but need to fix my other cars more importantly right now.

Current things it could use:

See a better way to drive a Ford? tips@dailyturismo.com