Reviving a neglected or abused car is kind of fun, in my sick and twisted mind. I convince myself that I’m saving money (sure), but I know for a fact that it’s satisfying to make such a sad little pile of parts into a respectable car again. It’s only been a few weeks with El Cheapacabra, but the joys of NA Miata ownership have got a firm hold on me already. Especially considering the bargain basement $600 purchase price. For my stack of $20 bills (seriously), I got a mystery car with a clean title that had obviously been sitting under a tree for a few years. The front end was crunched at some point in the past, but nothing major stood out as being mechanically wrong. OK, so the tires were 10 years old and basically square, but that’s an easy fix. 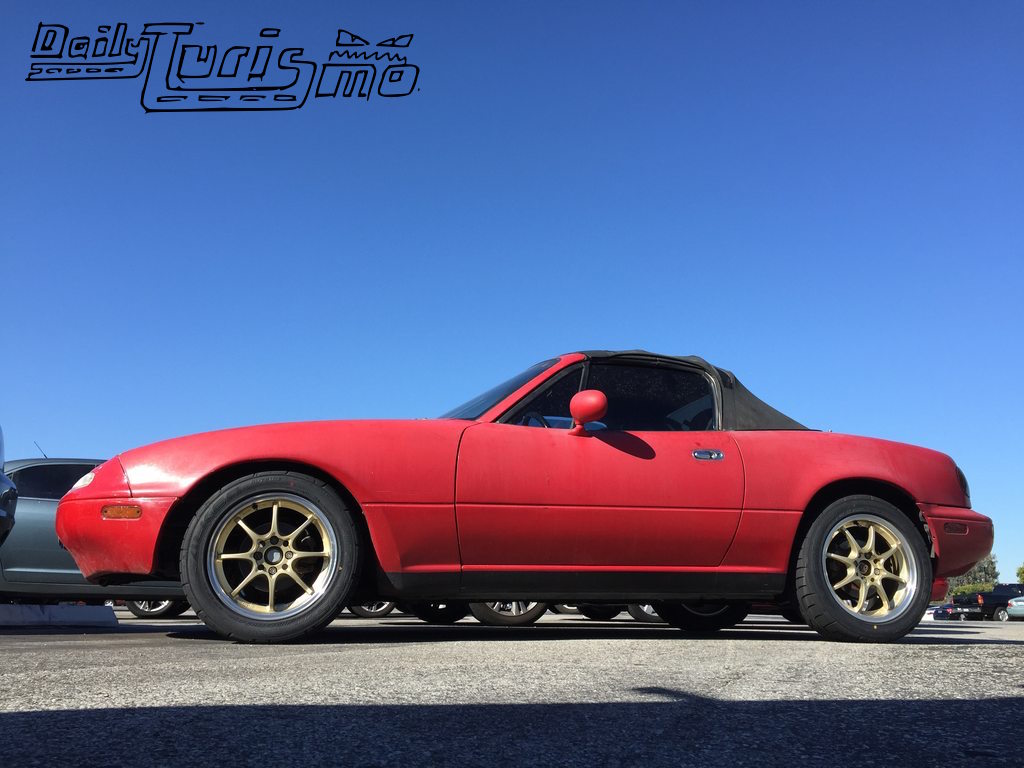 It took an itty-bit bit of work to get the thing to “stage zero” but I’m still a happy camper after spending a few more bucks on it. First job on the list was cleaning out the engine bay that was packed with pine needles, leaves, and other organic detritus. The cowl drainage tray was especially bad; a shop vac and a sharp implement to break up the crud took care of that, however. As soon as I wasn’t skeezed out by opening the hood – but far from show-car clean – I changed the oil. 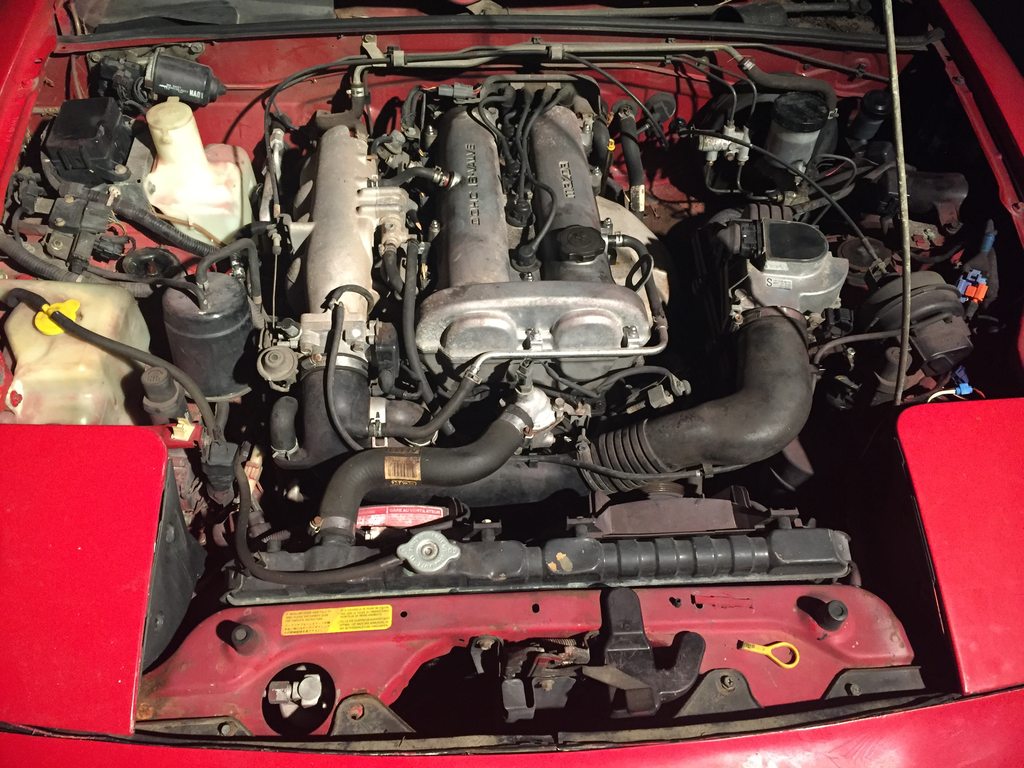 No telling how long this stuff was in the engine, maybe a decade or more, but it looked like watery black coffee and I can’t imagine it was doing much in the way of lubrication. Miata-having friends from Eyesore Racing suggested I look at the Mazda Millenia oil filter for my 1.6; it’s an easy upgrade to a taller filter with more capacity and filter media area, and fits with no issues since the mounting diameter and seal ring are identical. 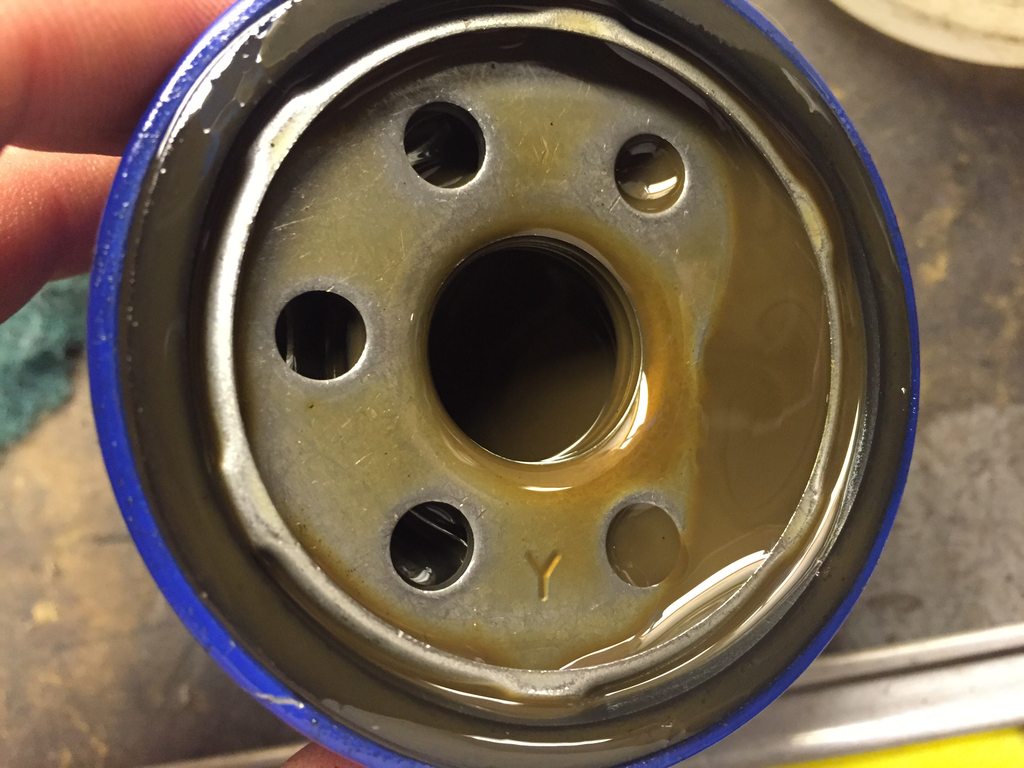 I don’t have to tell any NA owners how much of a pain oil filter replacement is on these early cars, but it was news to me. The filter lives on the passenger side of the block just below the intake manifold. There is zero space for a filter wrench unless it’s one of those fancy big sockets that fit over the end of a specific filter size. I don’t have one of those, so I used my left hand (only my left arm would fit in the minuscule space) with a rubber textured HF moving glove for grip, and wrenched it off with the power of Thor. A jug of 5W-30 finished off the job – I went with a thinner oil in a first stab at quieting down the occasional lifter tick from the top end. 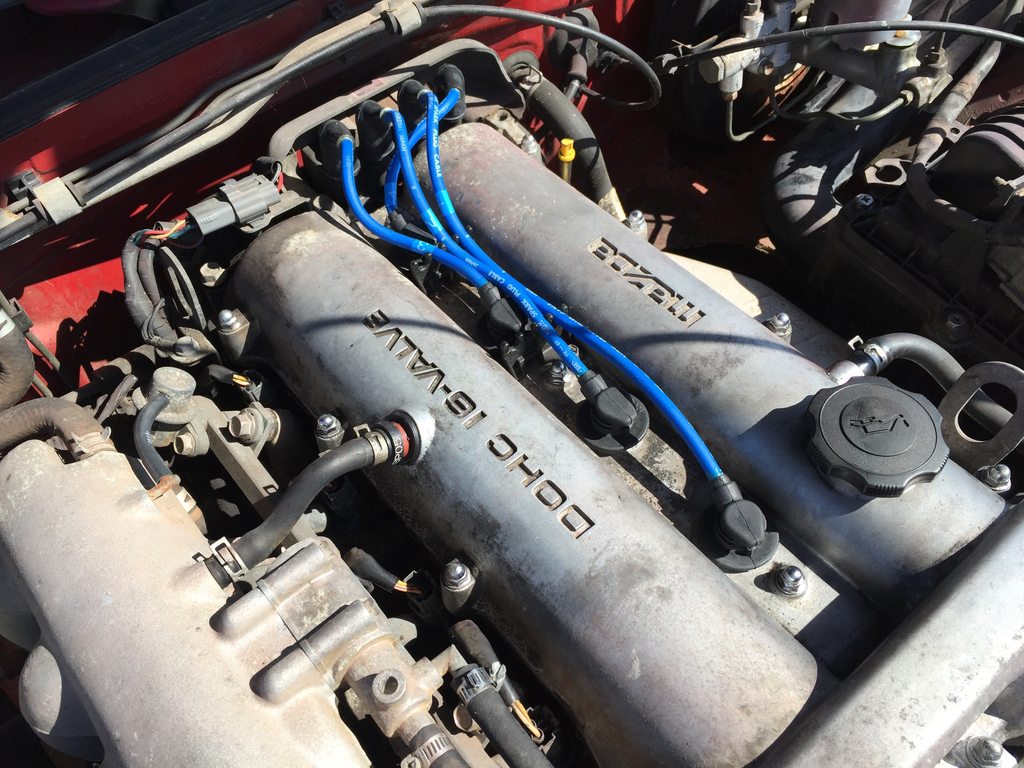 A new set of NGK BKR6E11 spark plugs and wires from Rock Auto seemed like a good idea for baselining the quality of combustion, and because these engines are notorious for cooking plug wires after a while. There’s also the fact that I had no idea how old the previous wires were. I should explain that the engine seemed to start and run just fine, if a bit misfire-y at cold idle, and the tuneup work was in preparation for a smog test. California legally requires the seller to have the car tested less than 90 days prior to the date of sale, but the low purchase price of El Cheapacabra was contingent upon a spoken agreement between myself and the seller that this one was “as is,” and I’d be on my own for emissions. 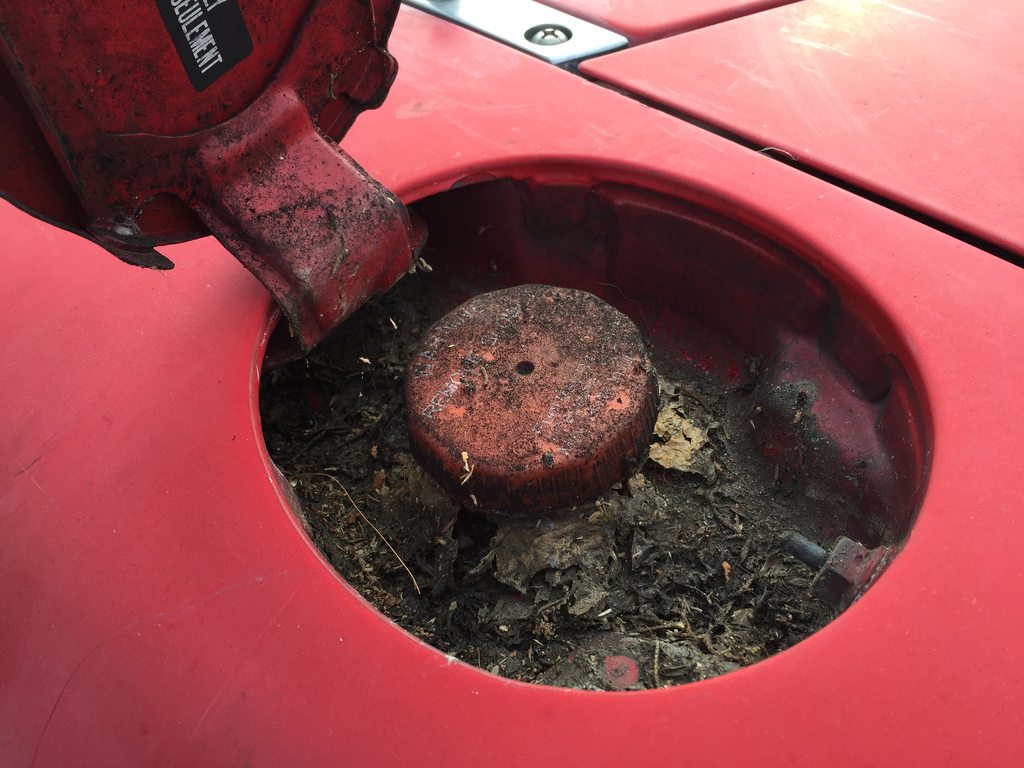 With the as-bought tank of gas getting low, and my previous experiences with marginally performing cheap old cars in California smog tests, I decided to fill the tank with a fresh load of Chevron 91 octane premium, because it haz moar additives, not to mention the mandatory 10% ethanol content helps with emissions a bit too. I grabbed a bottle of Techron for a mild fuel injection system cleaning effect, thinking the injectors were probably not happy after a few years of sitting. Imagine my horror when I popped the fuel filler door release for the first time and was greeted with the sight seen above. 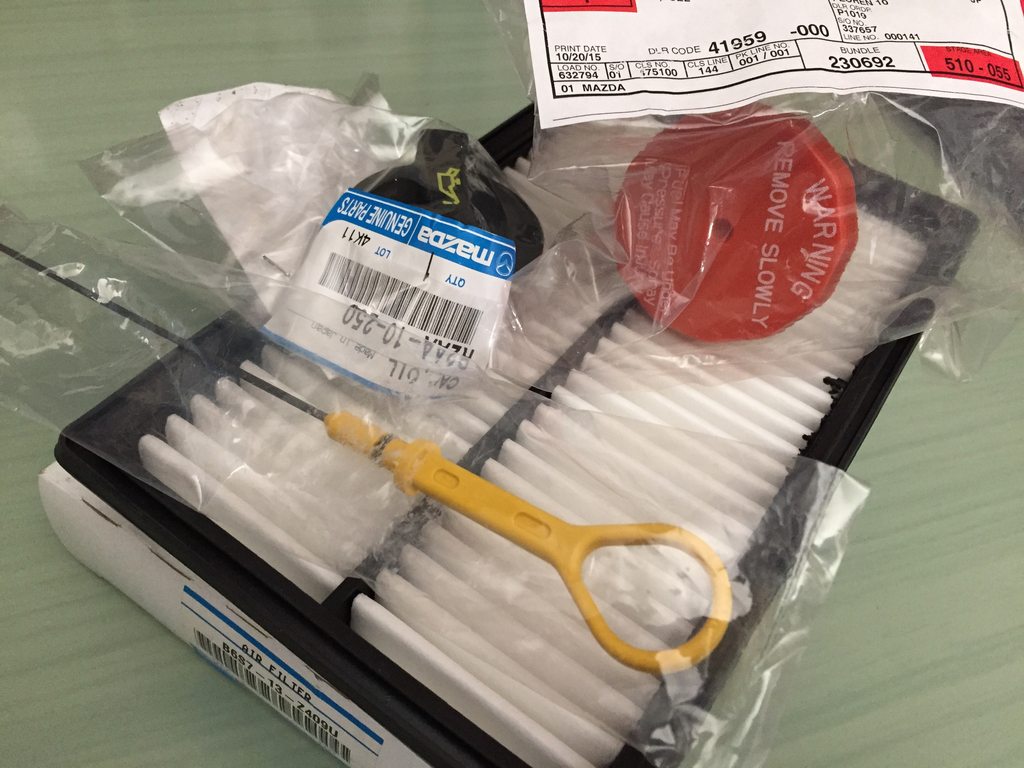 The nastiness washed out with simple green, and the old fuel only smelled moderately of benzene and was still in liquid form. Great news, but I knew that old cracked & dried out fuel cap would fail the evaporative emissions test as part of the greater smog process. A quick search around the internet and I found Browning Mazda’s online dealership parts system at OEMAutoPartz.com. I ordered a brandy-new OE fuel cap for $23, air filter for $14, and oil cap and dipstick for $17 to replace the cracked originals. 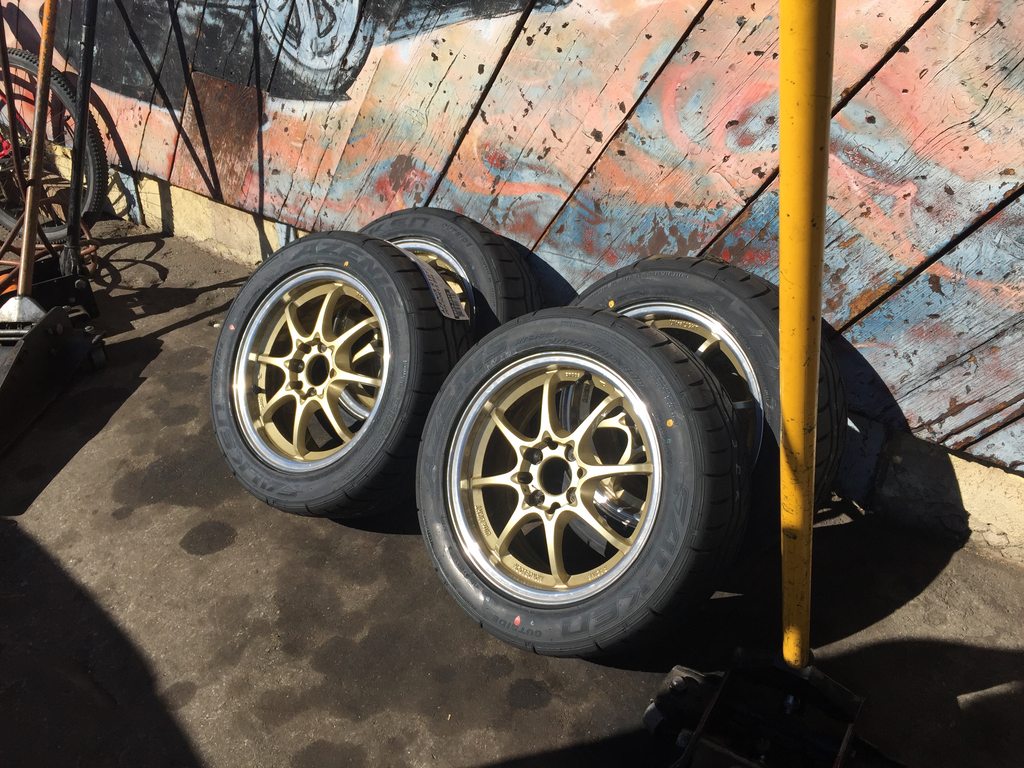 To bide my time while the new parts got happy in the engine bay and the new fuel was swirling around in the tank and washing the old heavier hydrocarbons away, I decided to do something about the dry rotted pizza cutters attached to the hideous chrome “daisy” wheels. I’m a firm believer that chrome plating has no place on any rotating object on the exterior of an automobile. Couple that with the huge impact that tires have on the way a car drives – seriously, they are the most crucial parameter in handling and grip – and I had to change the whole package, of course. 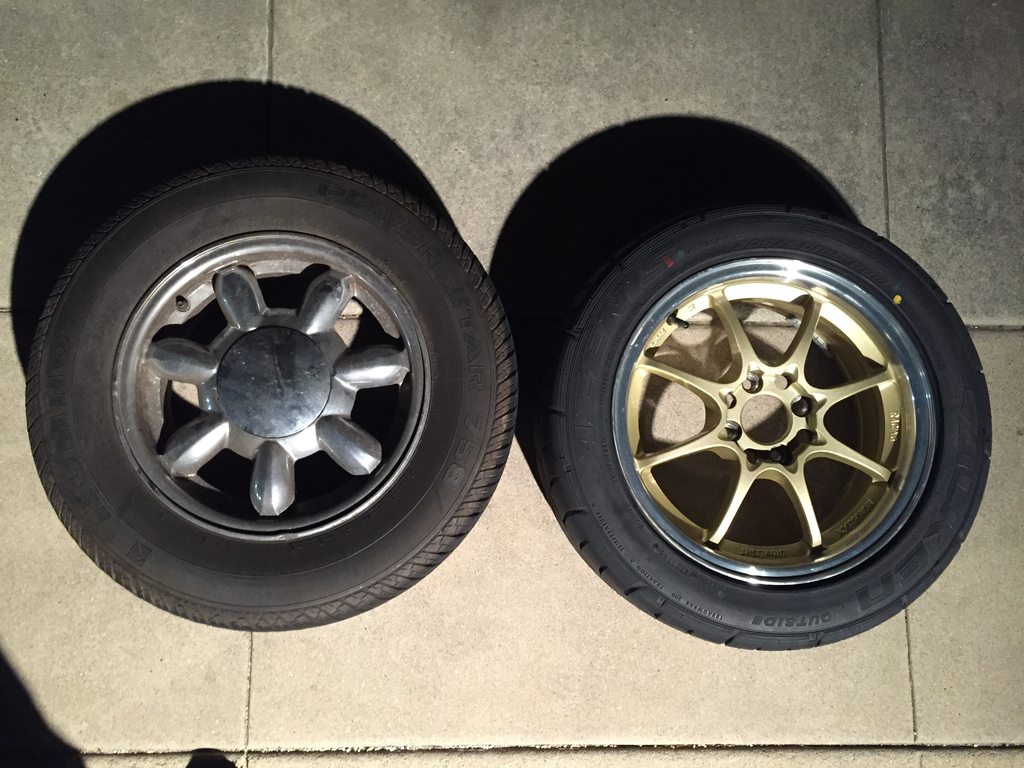 We had some no-name “Monoblock Racing” 8-spoke wheels sitting around for our MR Sakibomb Lemons racer, which just happened to be 15 x 6.5″ Miata wheels with the correct 4×100 bolt circle and the right offset. I grabbed these from the shelf and had a set of Falken Azenis RT615K tires mounted at my favorite $15/tire local “mountain balance” shop. The Falkens are a DT and Lemons favorite for a cheap, grippy summer tire which is perfect for a Southern CA commuter car that will see duty as a trackday special. The 205/50R15 size fit the wheels well enough, with what I like to call negative stretch since they are slightly wider than the wheels. Rubber compound, aspect ratio, and newness all contribute to a marked improvement in ride & handling in the old NA. Turn-in is much more crisp and direct, and the whole car feels more nimble without being stilted up on the old dry pizza cutters. 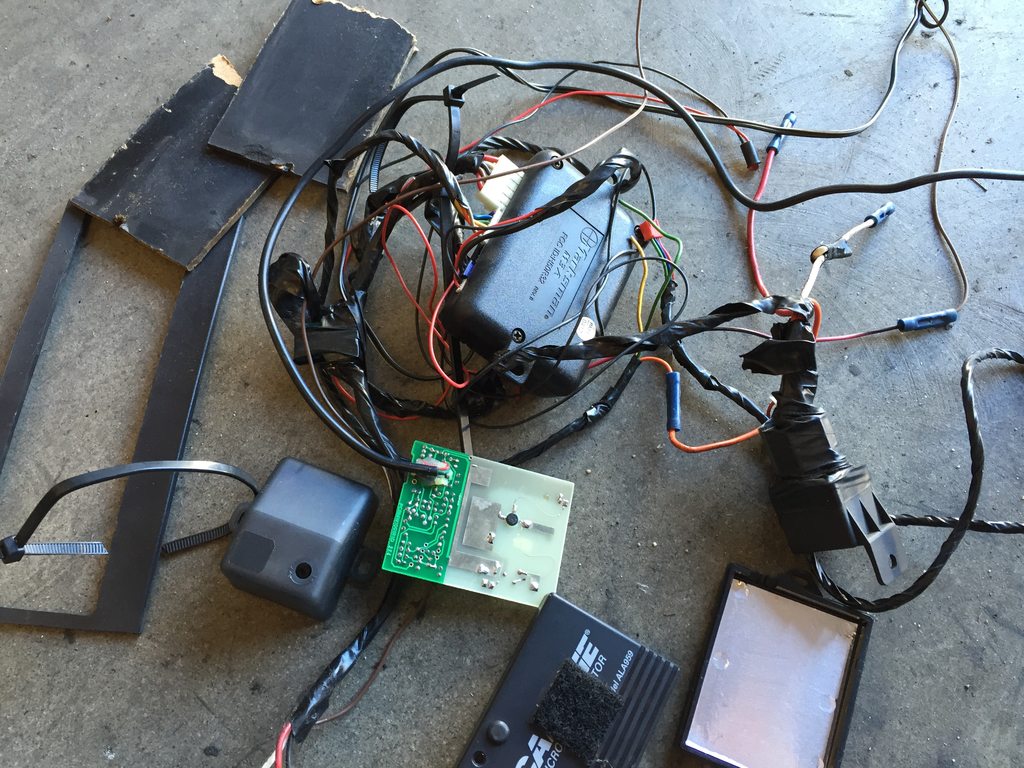 A few more jobs grabbed my attention before I attempted the smog test. Ferdinand Mazda certainly didn’t design the Miata with an alarm system, but that didn’t stop some prior owner from hacking one into the dash harness. It was a mess of aftermarket boxes, relays, and blinky lights, and it annoyed the crap out of me because I couldn’t ever figure out how to fully disable it with the silly key fob. A few minutes with some wire cutters and it was extracted into the pile seen above. 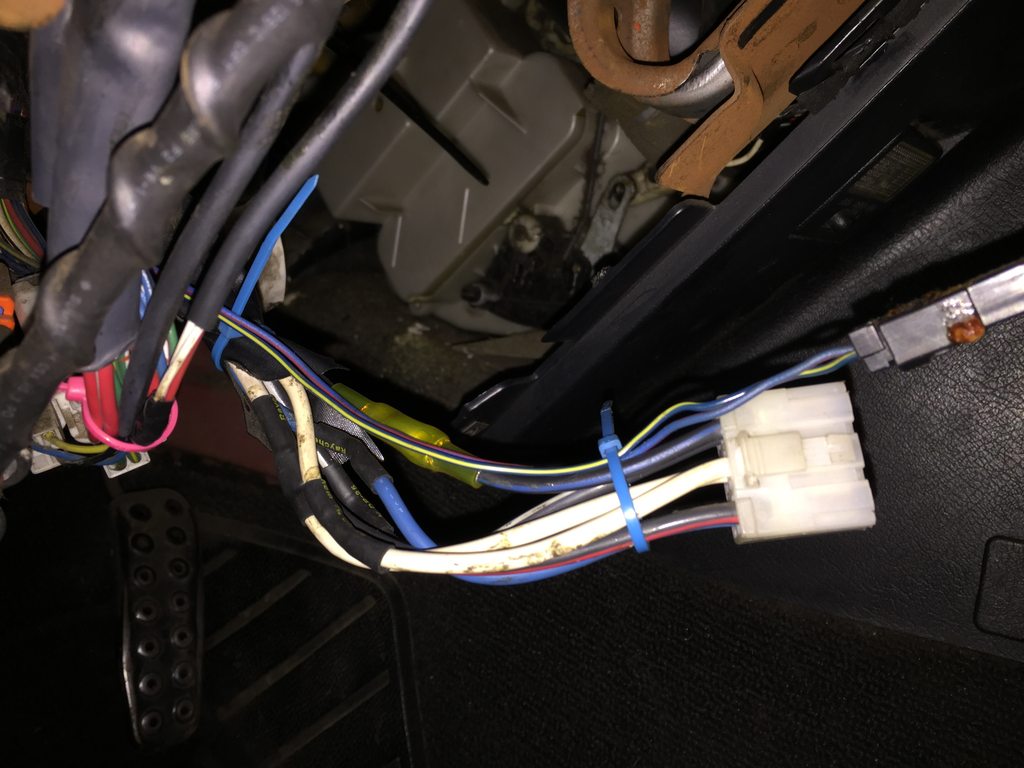 The crummy parts-store butt connectors were pretty flaky, but not as bad as the tapped-in connections where the alarm installer had stripped back insulation on the wire to be tapped, then wrapped the new wire around the bare conductor and finished off the job with a mess of electrical tape and zipties. Fortunately for me, only one of the ignition wires had been fully cut. An uninsulated butt connector crimped with actual crimping pliers and some heat shrink finished that off. The previously tapped wires were fixed by de-pinning them from the fat white connector seen at right, sliding some heat shrink over the spade, and then shrinking it down over the exposed section of copper. I like to leave things cleaner than I find them, and bundle wires together tightly after any modifications. A few more zip ties, and this job was done. 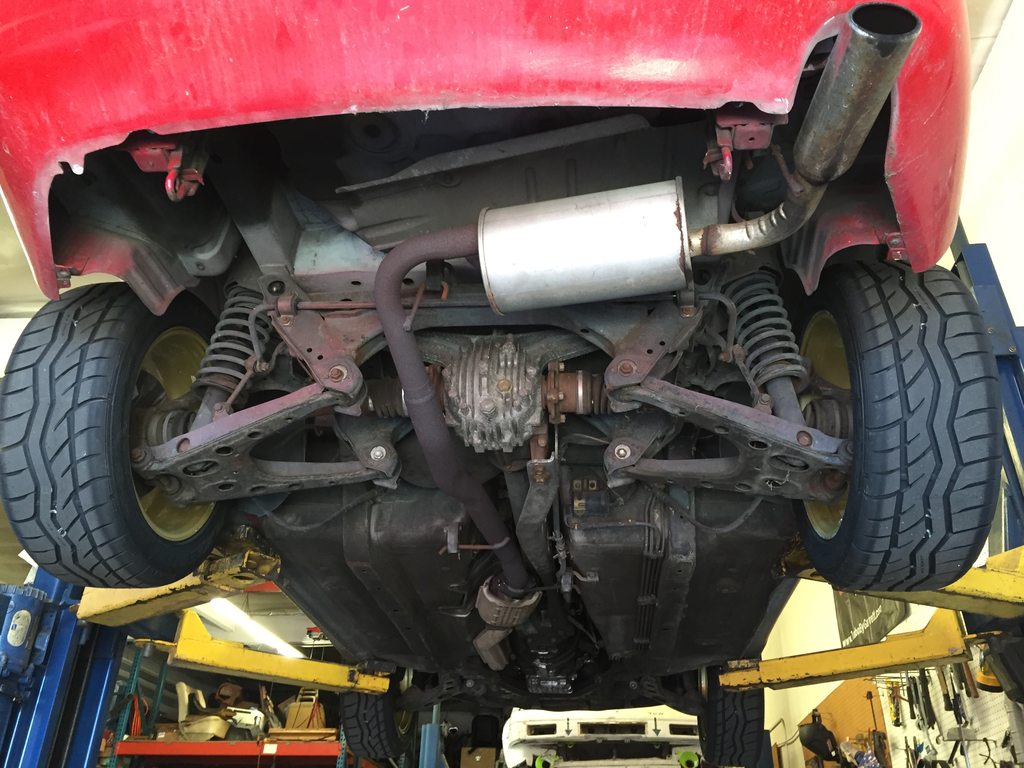 The last remaining eyesore (earsore?) preventing the “stage zero” maintenance from being complete was the crummy exhaust system. From the exhaust ports to the catalytic converter, everything looks like the nice original stainless system the Miata would have been born with. The cat itself has been replaced but wasn’t looking too sorry for itself. Everything after the cat however was a rusty, rattly mess. 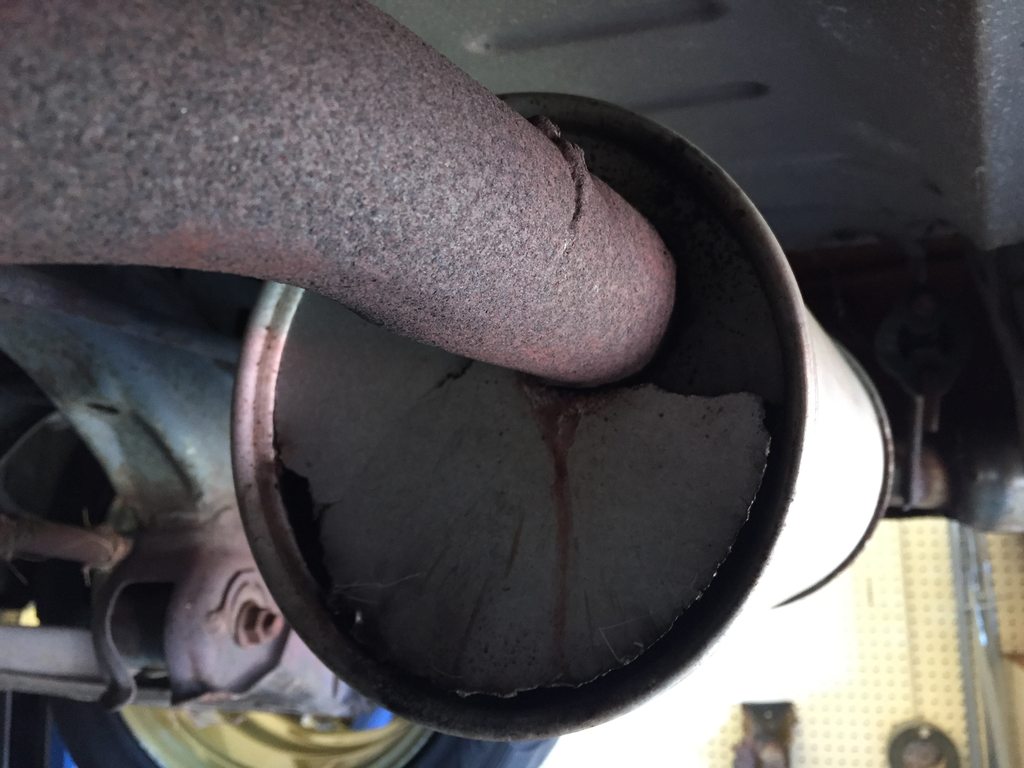 I doubt this muffler was a stock part, and had no qualms throwing it out for the vulture-like scrap metal collector guys who regularly prowl the alleyways behind our shop at DT HQ. A few small holes made the car sound sporty, but through a few weeks of regular use one whole side of the muffler can liberated itself from the system. It might be hard to see in the photo, but the end cap was cracked at least halfway around the circumference. Needless to say this made an embarrassing amount of noise and wouldn’t have any hope of passing the smog test. 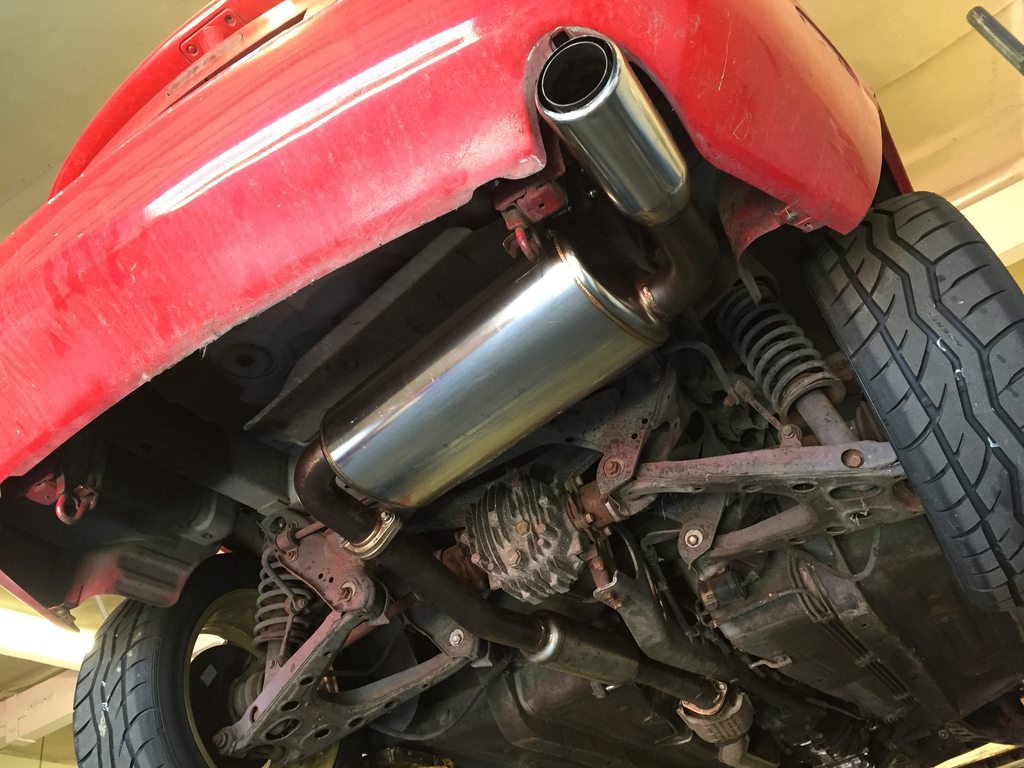 I have been regularly searching craigslist for Miata parts, which is super easy because they are so plentiful. One day a complete Racing Beat cat back system in 304 stainless for the 1.6L NA Miata popped up for $260, lightly used. Score – this went on the car as soon as I could possibly get it on there. I’m impressed with the quality of the system; the welds are super nice and the flanges are all investment cast stainless bits with the RB logo embossed in them. The system is nice and quiet at low load and below 3000 rpm. At full throttle from 3000 – 7000 it’s throaty and fairly loud, but nowhere near the earsplitting rasp I experienced before. A little research tells me that this is a Power Pulse Sport system, with a 2.375″ tube diameter and a pre-silencer in the mid pipe. Racing Beat lists this for $445 so I was more than happy with a used system for about half price. They claim a 3.2 hp gain at the wheels – and with my highly calibrated and precise butt dyno I can feel every bit of that last two-tenths, for sure.

After all that work, here’s the proof that it was worth something. The smog test went swimmingly, with hydrocarbon and carbon monoxide levels well below the limits, and only NOx getting close to borderline. Apparently this is a common trait among these early Miatas. No complaints from me; at least it’s not a cheater like our NOx belching TDI. These test results are legit. 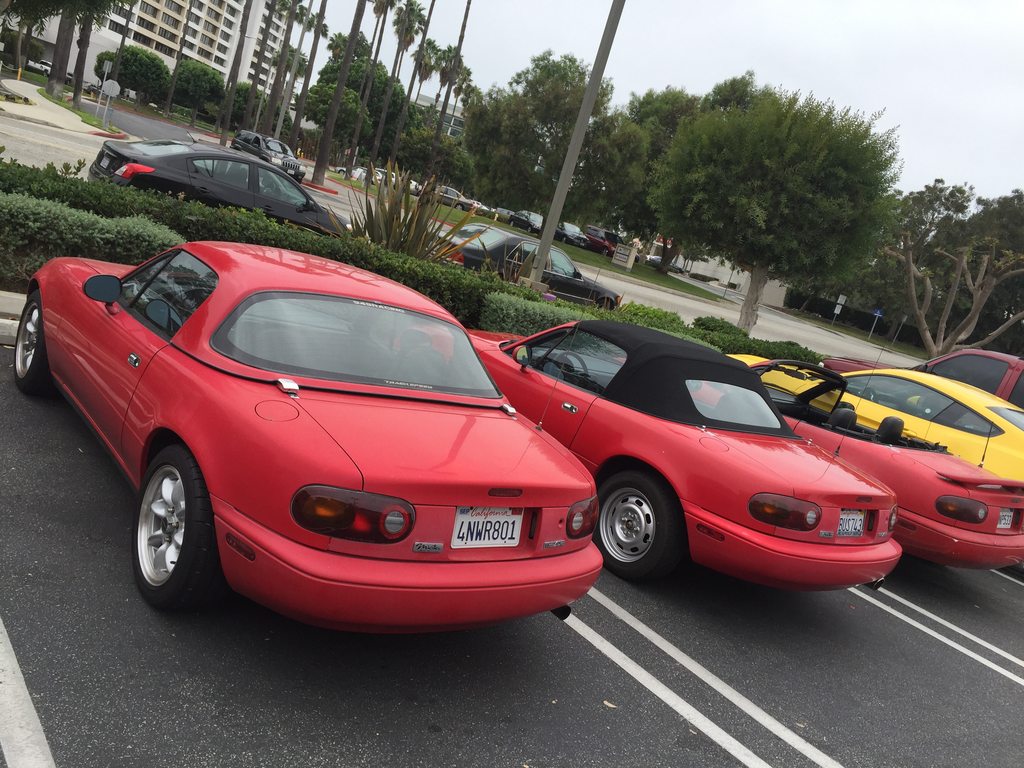 Buzzing around town I’ve started noticing more of these little guys, and happened upon this mini-meet one day at lunch. Hardtop, soft top, no top – mine’s the one at far right, with the dull paint and silly decorative wing. My wife was deeply offended by said wing, by the way, which is why you’ll notice it absent in several other photos. She took joy in eradicating such fakery from the decklid. 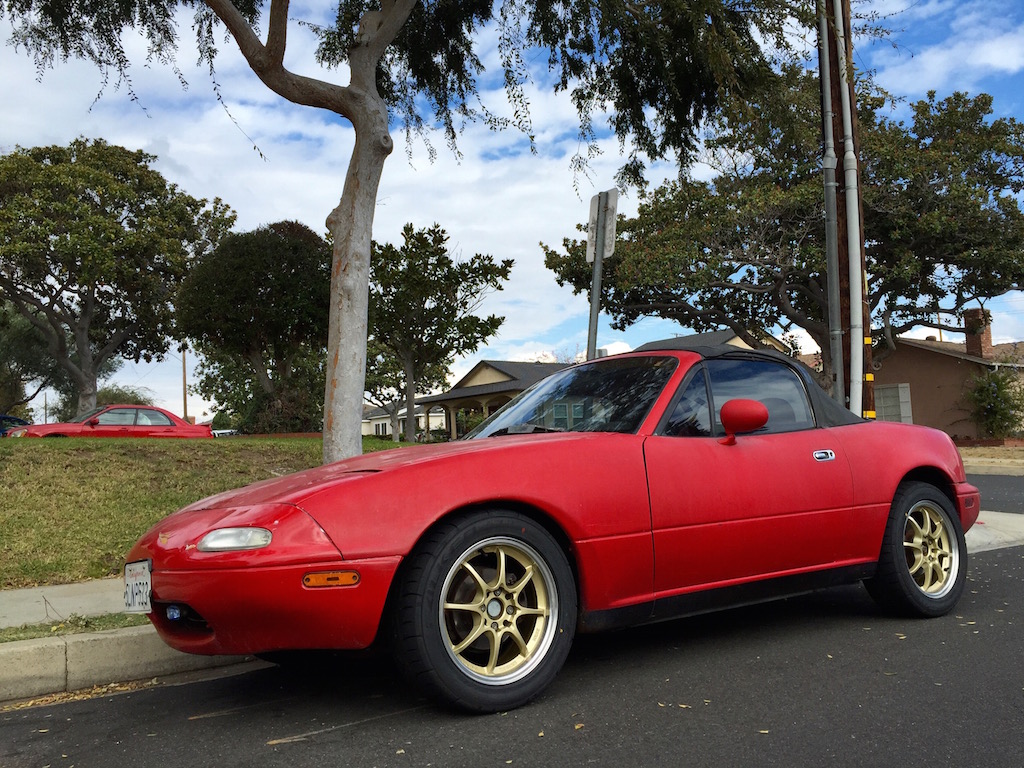 I haven’t even washed this thing yet but the initial de-scuz is over and it’s fully street legal. The car is proving to be reliable so far, and I’m looking forward to turning it into a trackday machine with some cheap coilovers, a roll bar or 3/4 cage, and brake upgrades. Stay tuned, motorheads!