by Adam — In posting about the Jensen-Healey I asked if anyone had seen
another Lotus 907 powered classic cheap? To follow up and to answer the
question I present for your approval a 1979 Lotus Eclat. Some may say
“Egad, what is that?” should you purchase this fine Lotus you could well
say “My good chap this is my fine Lotus Eclat!” Monocle and gloves to
slap the offender are optional. Merriam-Webster defines Eclat
ostentatious display, dazzling effect, or brilliant or conspicuous
success and the car was well received and applauded for it’s handling
and grip. This 1979 Lotus Eclat is for sale in Tucson, Arizona for $6,200 via craigslist 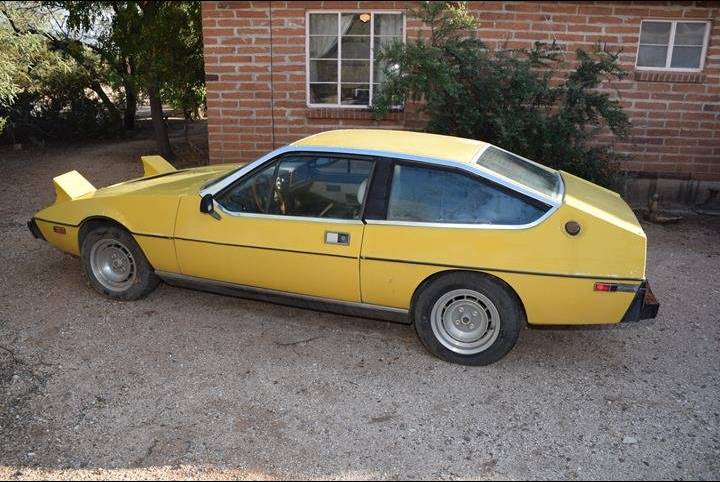 Good
looking from the side profile, the paint appears to be in good shape.
The seller indicates the car is a driver with 50,000 miles on the
odometer. The cars did have 4 and 5 speed manual transmissions as well
as an automatic. This car contains the four speed. From the photograph
the original wheels are included. The series 1 cars from 1974 to 1980
had a felt strip in between the body and steel crossmember which trapped
water causing corrosion in damp climates so that will be something to
look out for although many cars have been retrofitted. Series 2 cars
from 1980 to 1982 avoided the rust issue with different gaskets and
galvanized chassis.

A
front engine rear wheel drive Lotus in not what someone growing up in
the 80’s usually thinks of when exposed to the Esprit from The Spy Who
Loved Me but the Eclat is not without it’s charms. The 1973 cc dual
overhead cam, 16 valve all alloy engine produced approximately 144 bhp
but was all top end power and earned the nickname “The Torqueless
Wonder” and also went on to power the Lotus Esprit and Lotus Elite.
Later Series 2 cars used a larger Lotus 912 engine with 2174 cc and
producing 160 hp. I imagine the engines could be boosted to obtain more
power.

Price is negotiable and armed with a little knowledge you may end up with a unique car that has handling and steering by Lotus.

Here is another time wasting video about the Eclat to help you avoid work.  The nickname Lots Of Trouble Usually Serious (Lotus) usually refers
to examples not well sorted and there is a derisive saying for every
brand but once up to speed I find cars are usually more reliable than
conventional wisdom dictates. Don’t you?   Fill in your own favorite
derisive mnemonic below and lets see if we can’t start the definitive
collection.

See a wedge shaped classic for a better price? Send it here: tips@dailyturismo.com