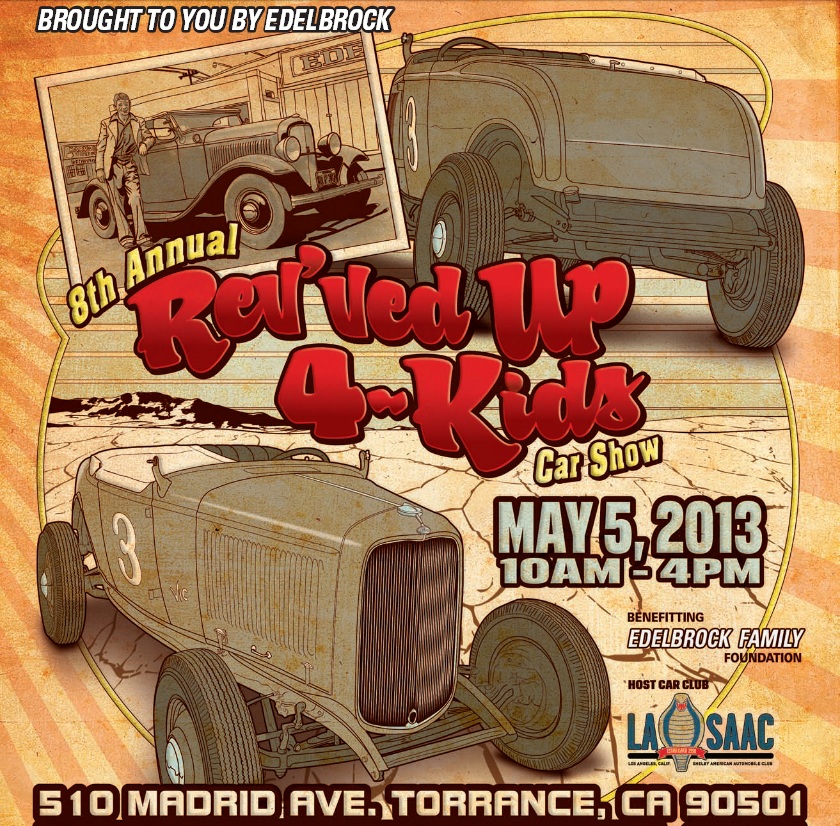 On the first weekend in May, gear heads around the South Bay Los Angeles flock to the annual Rev’ved Up 4 Kids Car Show, located in front of the Edelbrock Factory in Torrance, CA.  Last weekend the Daily Turismo sent a contingent of staff reporters to sample the vintage cars, gourmet food, live music and kids games/fun. 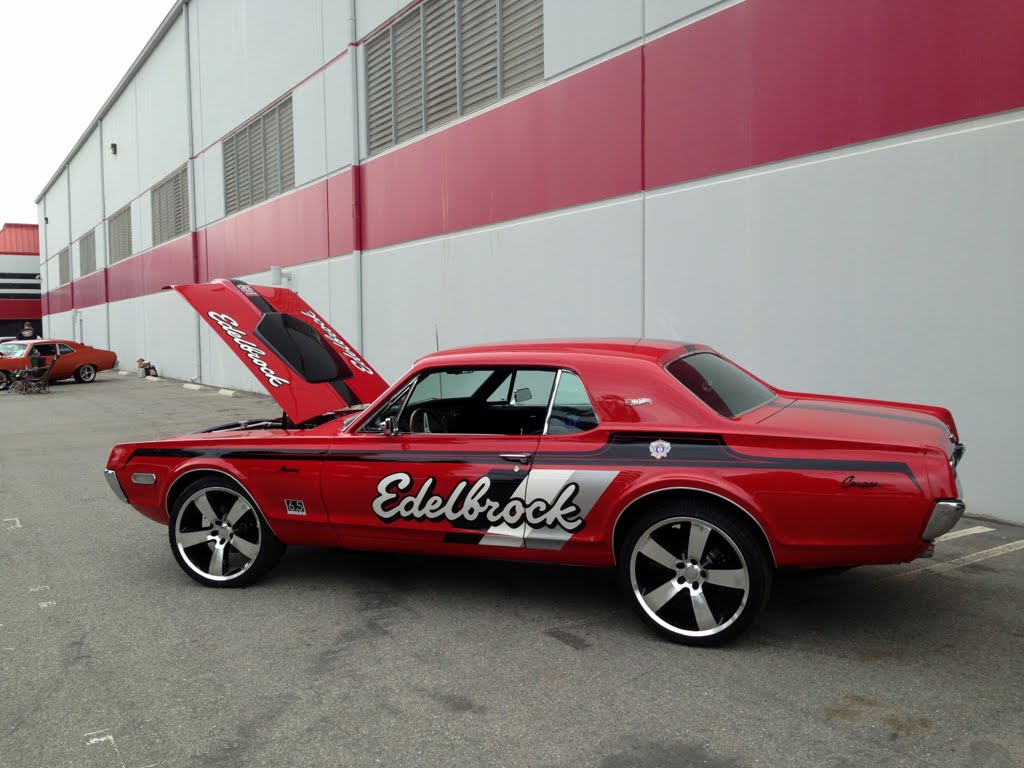 The 8th Annual edition of the Edelbrock Foundation’s charity for kids car show was held on a cloudy Sunday May 5th, 2013.  Edelbrock is a manufacturer of aftermarket hot-rod parts of all sorts of vehicles and has a 65,000 square-foot distribution center located in Torrance, CA and 3 other nearby sites that include headquarters, manufacturing, assembly, engineering, research and development etc.  Edelbrock is a company that proudly displays Made In USA stickers on most of their product and the footprint in Torrance is positive sign in the dog-eat-dog world of US companies trying to be the fastest to outsource labor to Bangalore. 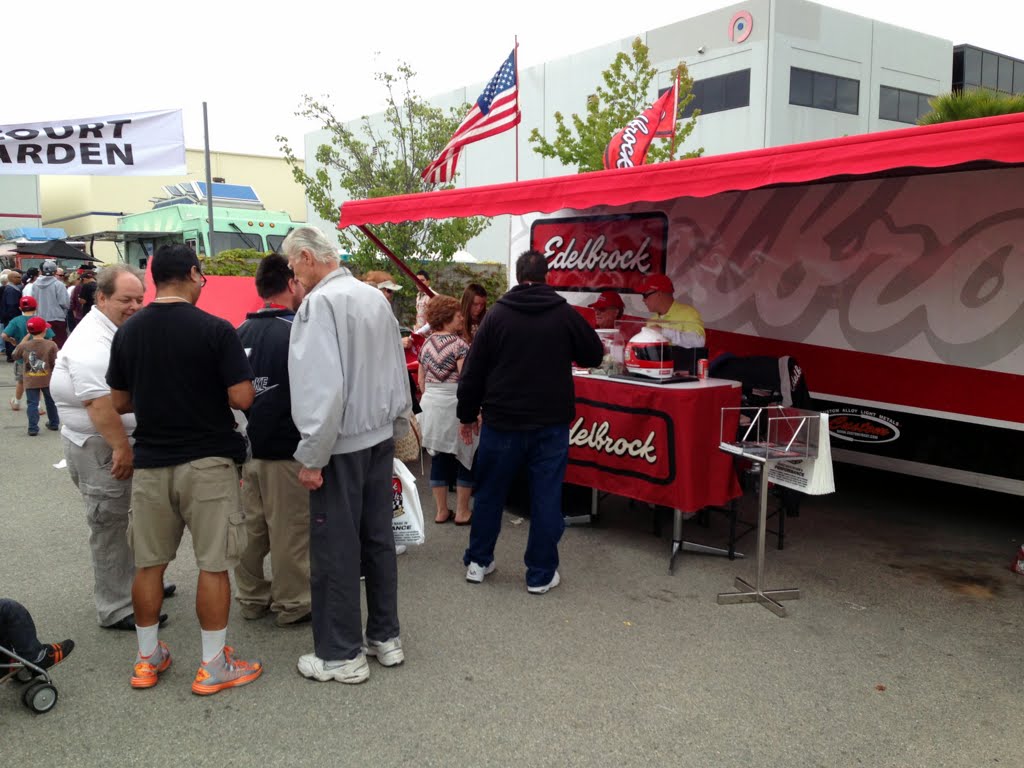 “The man” himself, Vic Edelbrock Jr., makes an appearance at the Rev’ved Up 4 Kids tour signing autographs and sitting under a red awning smiling at people for hours on end.  Vic Jr was the CEO of Edelbrock from 1962-2010 and now he spends his retirement as the Chairman of the Board and vintage racing a 1969 Ford Mustang Trans-Am racer. 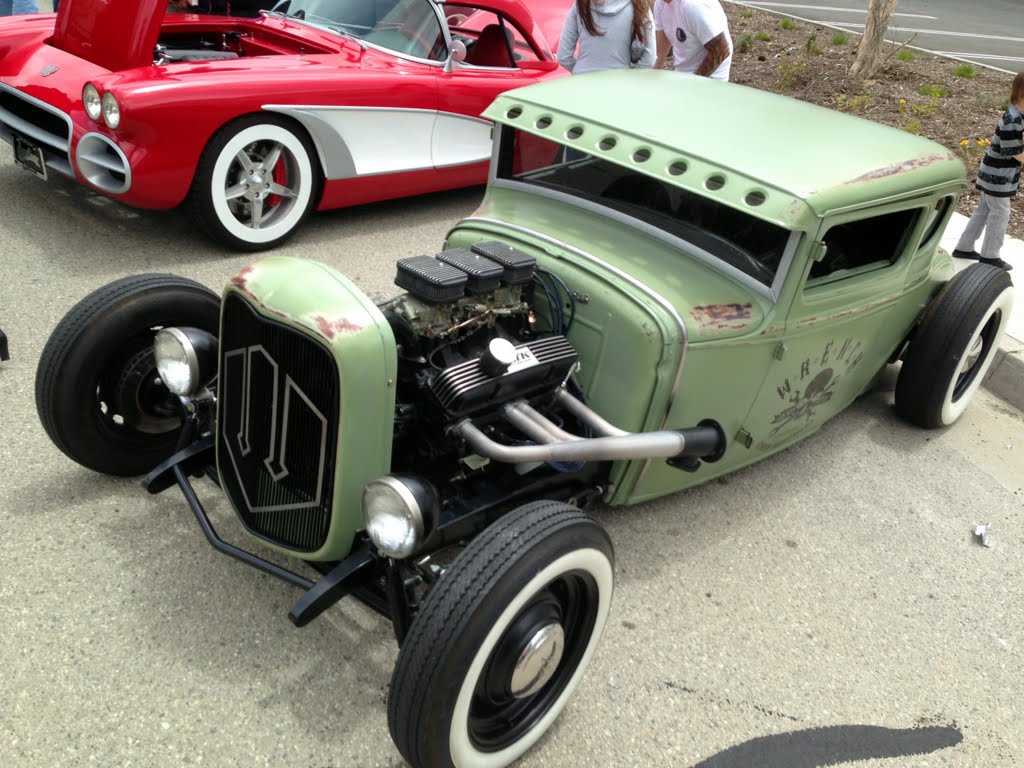 The Rev’ved Up 4 Kids Tour is open to the public, but the premium spots can be reserved by companies, as demonstrated by the West Coast Customs truck and show cars displayed near the entrance. 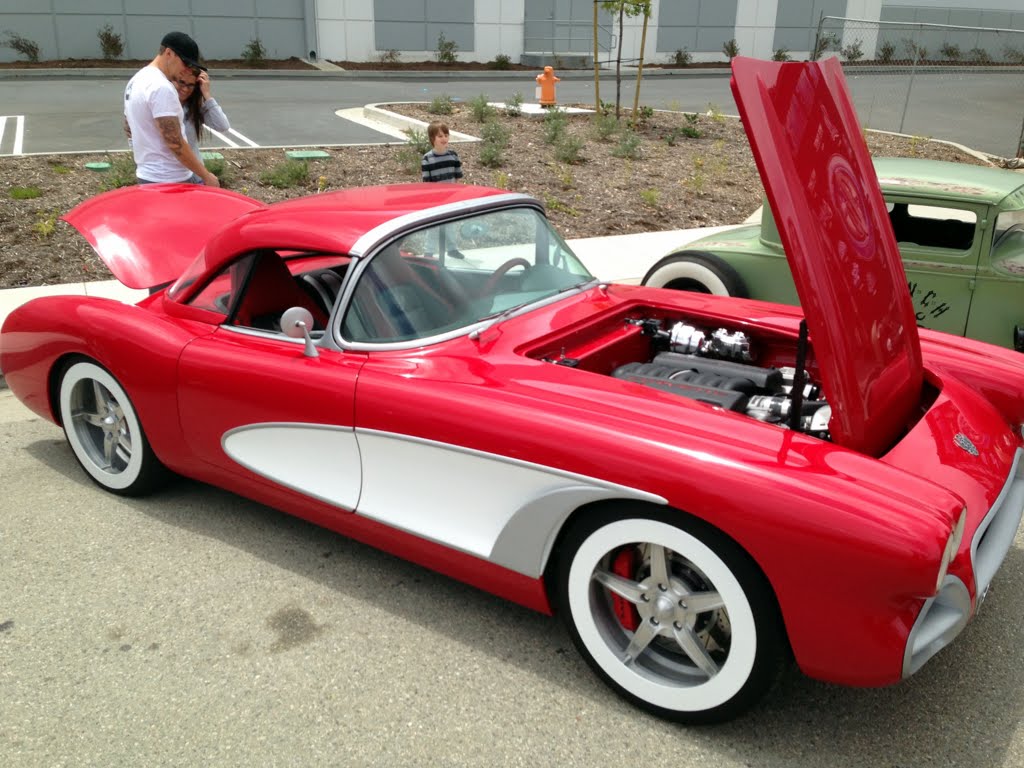 The Vette.I.Am is a creation from West Coast Customs – at first glance it looks like some kind of wanna-be kit car masquerading as a C1 Vette, but upon furthur investigation it looks like the tatoo’d and talented tools at WCCs took an actual 1958 C1 Corvette and massaged it into a kit-car looking beast you see here from a request from singing sensation Will.I.Am. 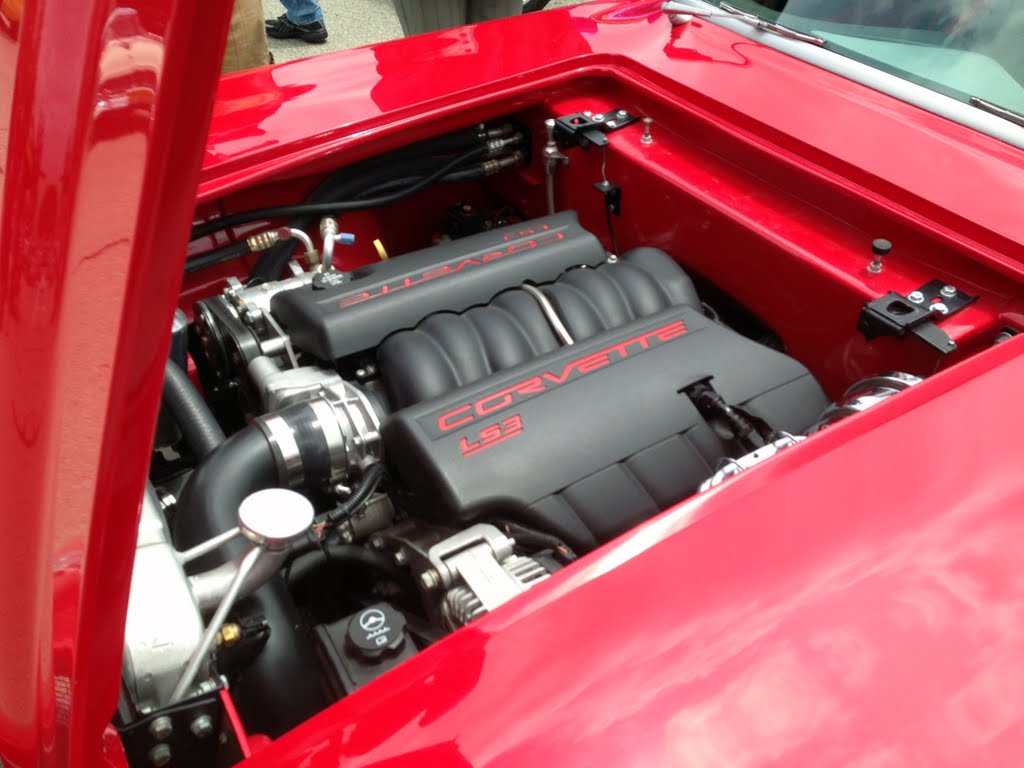 Mr I.Am is a pioneer in the recording industry, formal noun use of punctuation, auto manufacturing in low cost regions (see IAMAUTO) and ‘progressive’-styling on a retro car.  He also has an LS3 engine powering his custom Vette, so we consider him a kindred spirit. 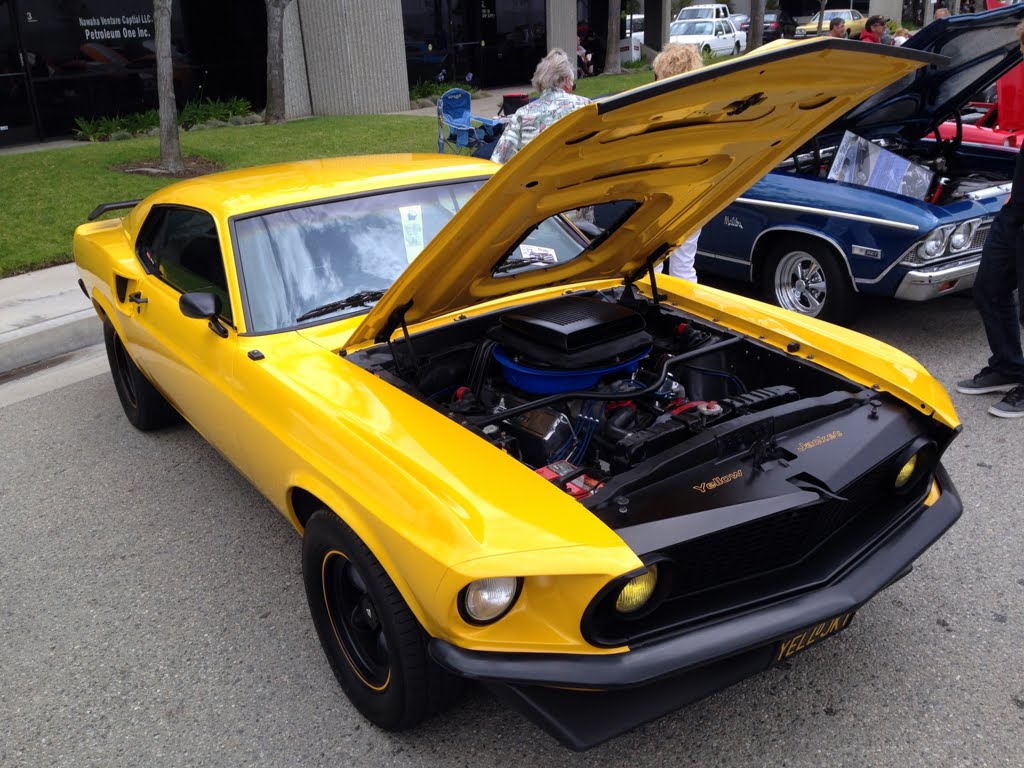 Located near the entrance was a particularly sharp looking custom 1969 Ford Mustang fastback with a “Yellow Jacket” theme.  Concept and vision are major aspects of a modified car, but execution is
a thoroughly hairy beast and this buzzer has had significant effort go
into the details. Panel fit is tight, a cooling blockoff plate is added above the inlet to the radiator with Yellow Jacket script and everything looks nice. 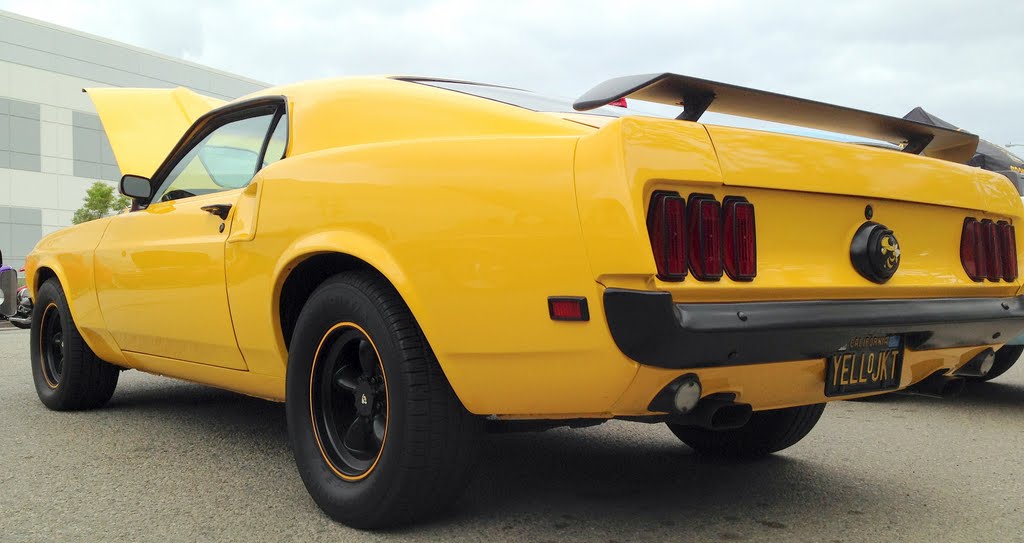 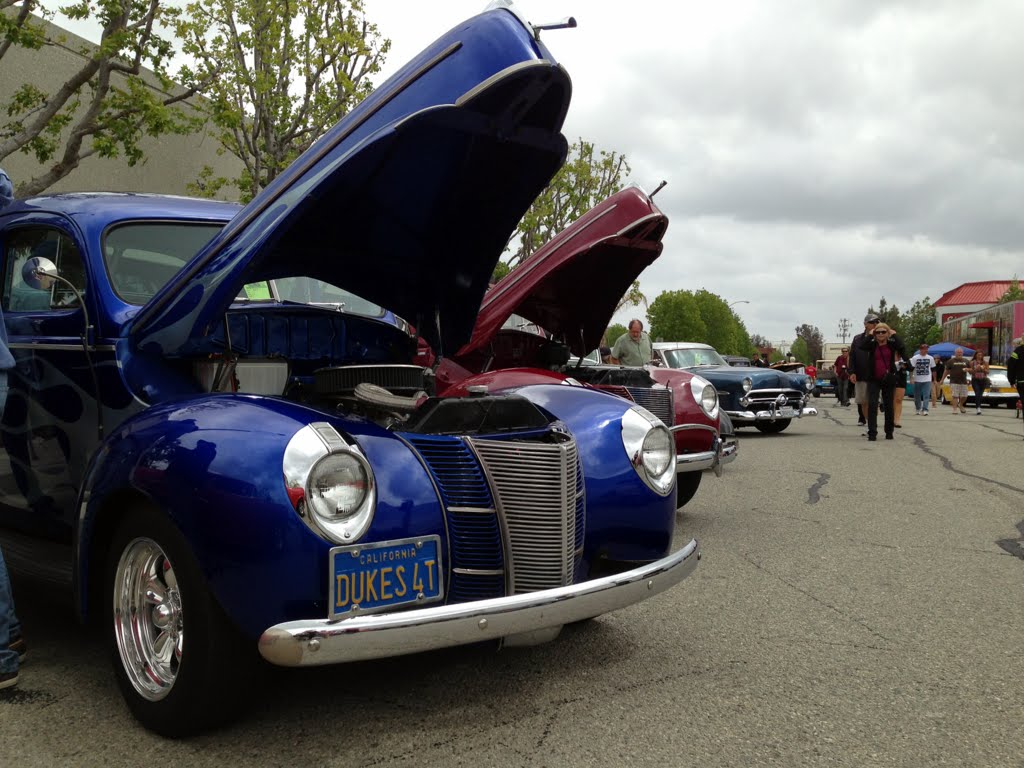 Plenty of variety at the Edelbrock show, a little bit of everything for everyone.  The only thing missing was the sun, who decided to keep well hidden under an early layer of SoCal ‘June gloom.’ 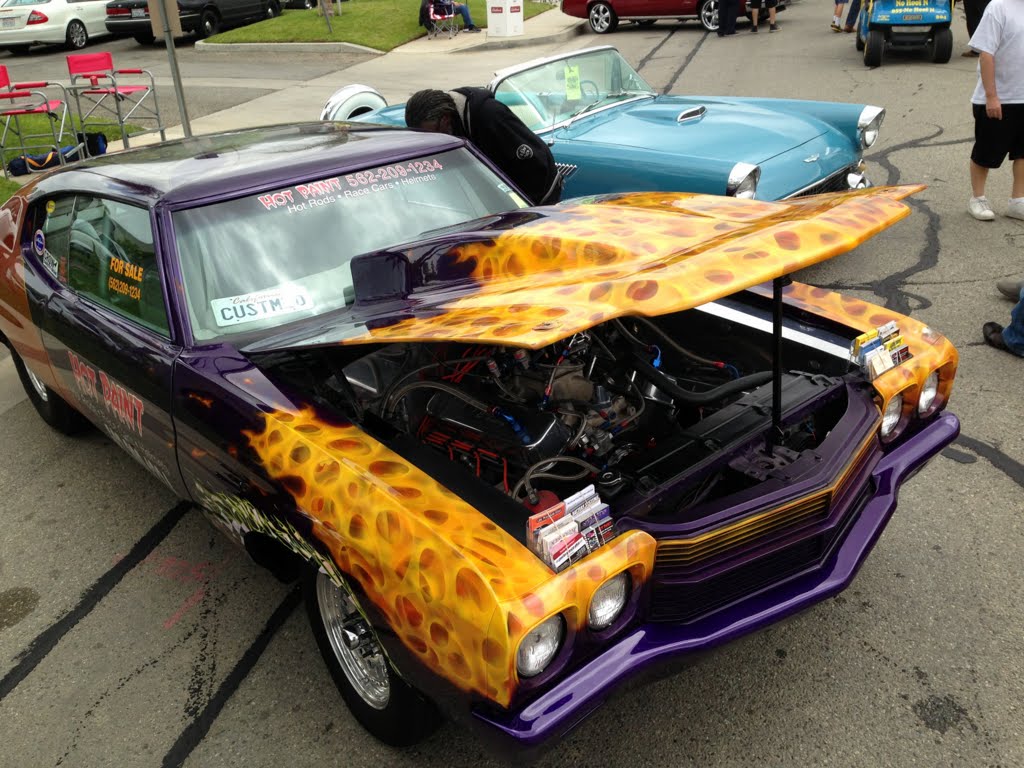 This custom painted 1970 Chevelle was a demo car for a paint shop and looked wild in person.  The permanent for sale stickers usually indicate a seller asking too much money, we we are always willing to stop and take a peak for potential roadkill (no, not dead animals, roadkill is when the Daily Turismo shares a local car for a car from a show or event to the world wide web). 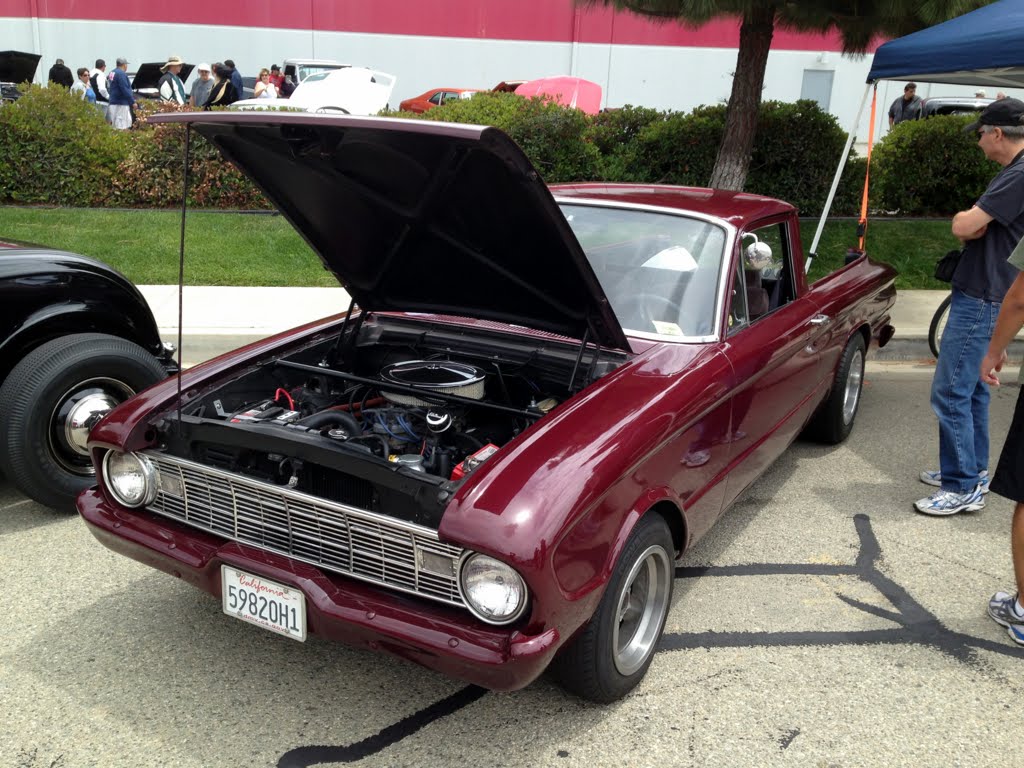 This 1960 Falcon Ranchero is a better potential roadkill candidate – we’ll post it up later this week. 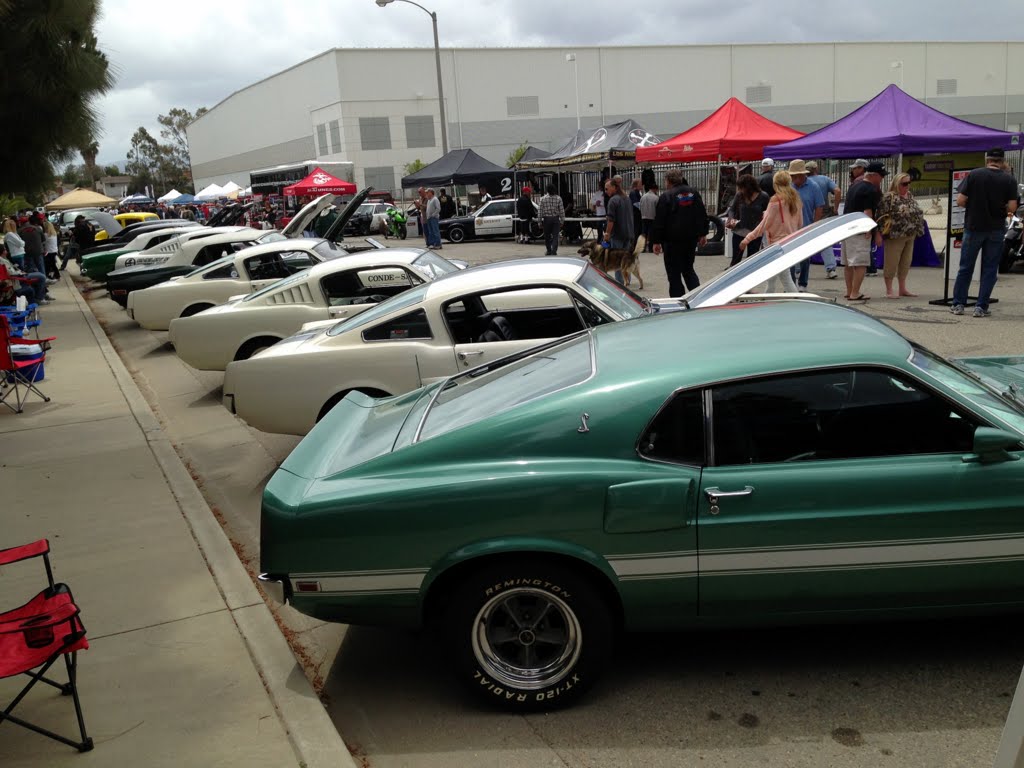 Edelbrock has no particular allegiance to Ford product (he probably sells 2X as much Chevy stuff) but for some reason this show was dominated by 1965-1969 Mustang Fastbacks. 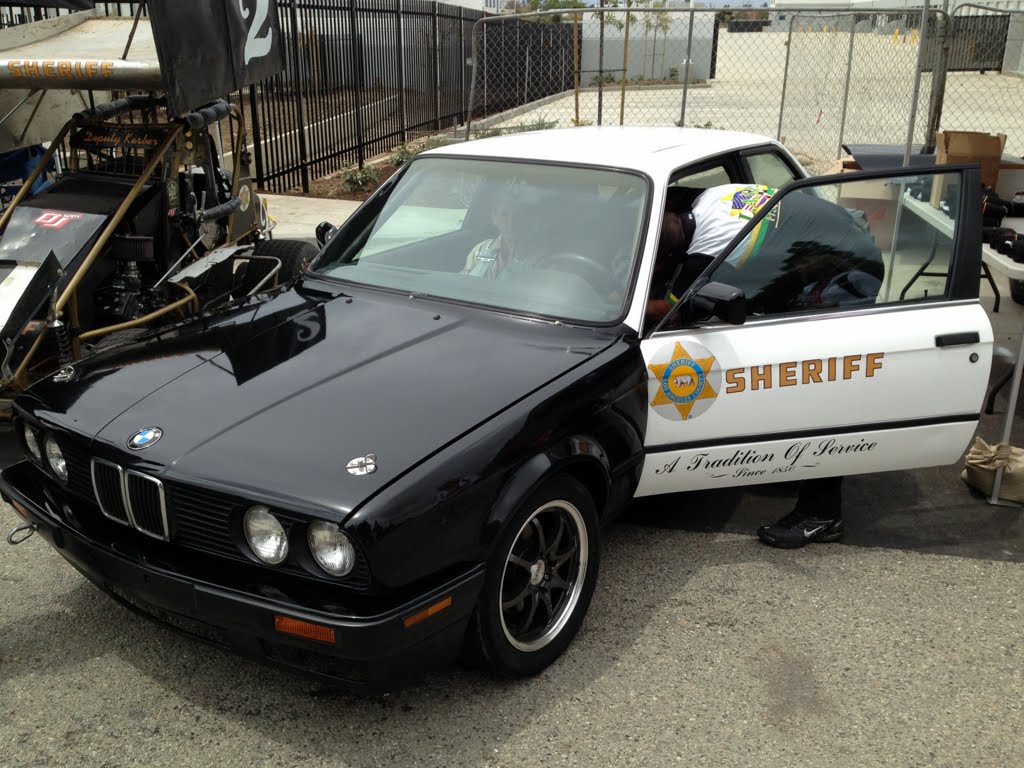 The LA County Sheriff had a cool display that included a nice e30 325 converted to police duty. 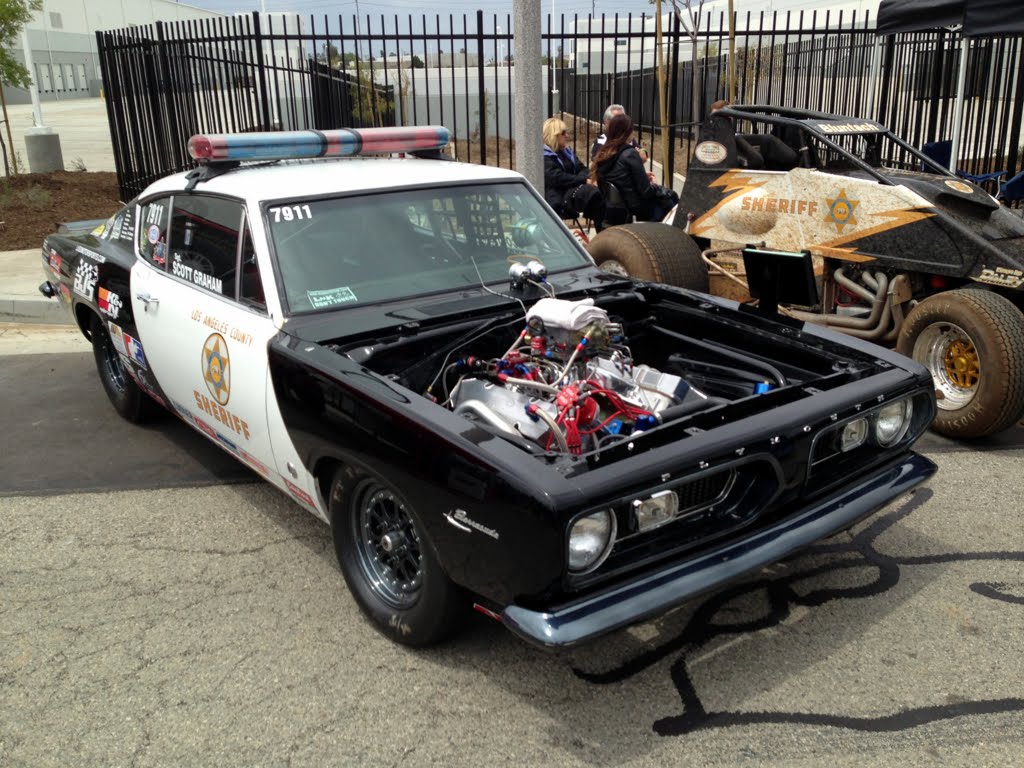 …and a Plymouth Barracuda converted to track duty, but complete with Police markings and light bar. 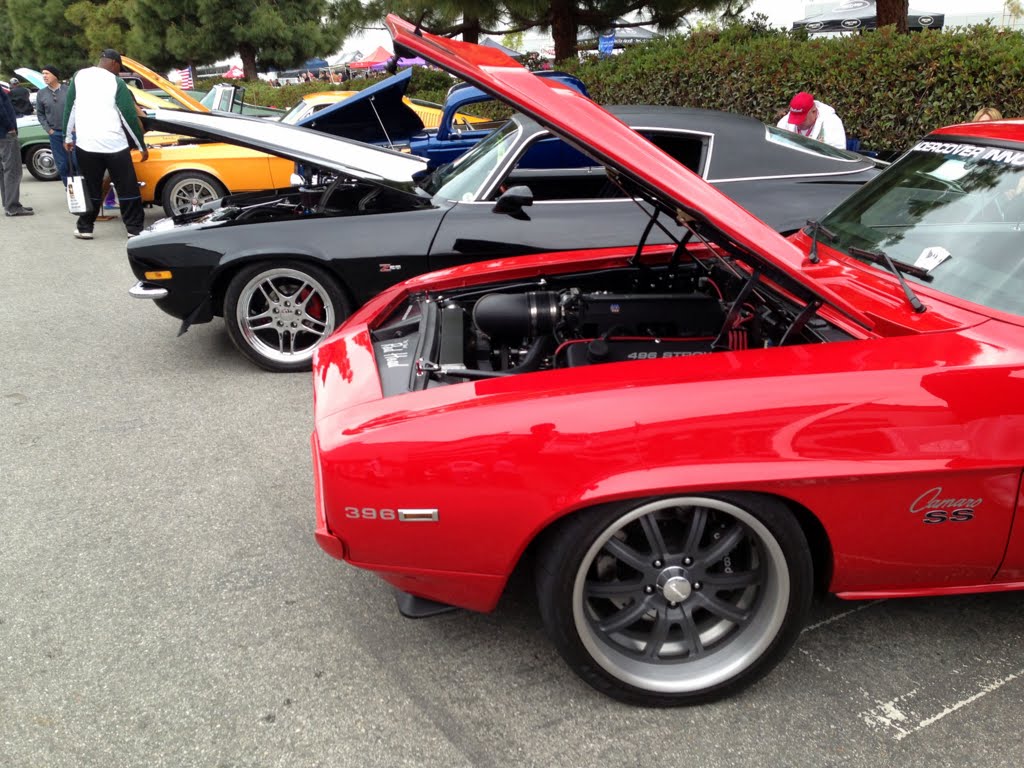 The Bow-tie guys weren’t left out of the party and there we some nice Camaros parked right in front of the entrance to Vic’s Garage, a 10,000 square-foot warehouse that is “home for the Edelbrock collection of R&D vehicles, street rods,
street machines, race cars and memorabilia from over 70 years in the
automotive industry.” 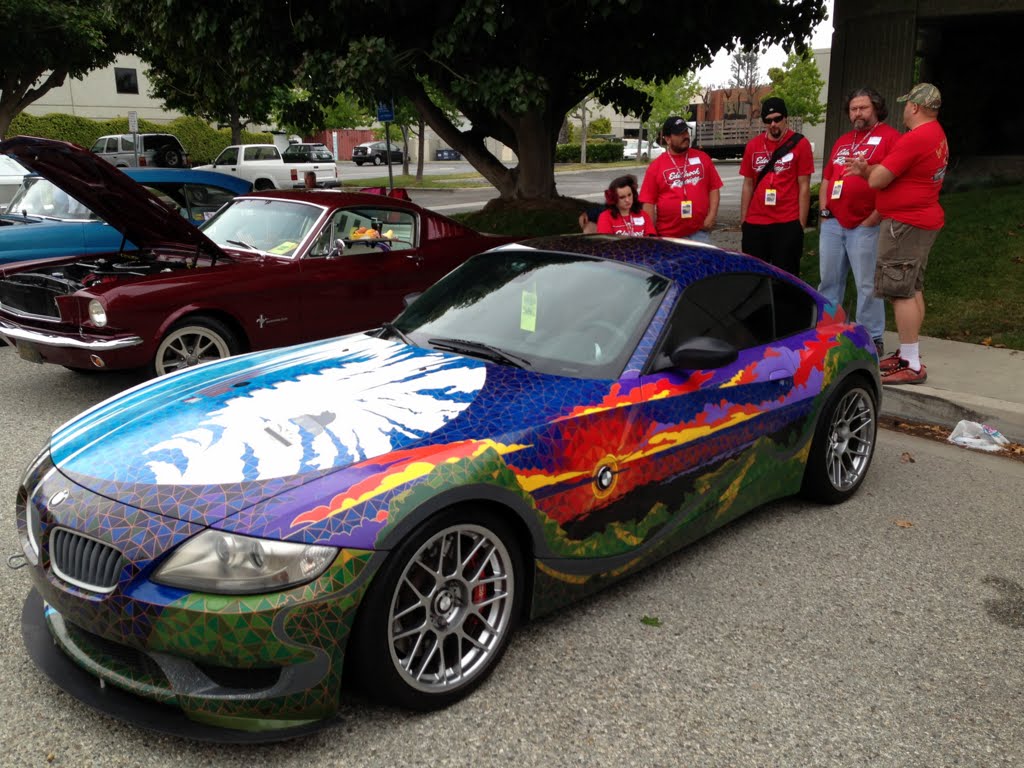 Edelbrock tends to cater to domestic performance, but stuffed between the rows of Fords was a particularly cool looking BMW Z4 M Coupe art car. 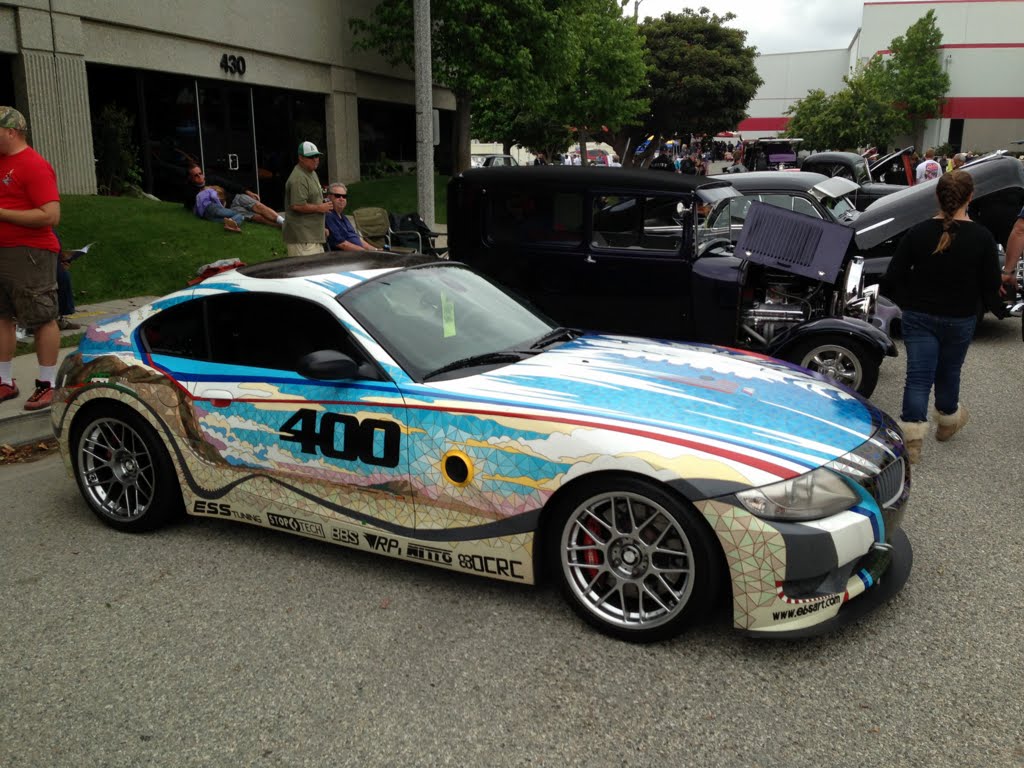 “Scatha” is the brainchild of freelance artist Earl Shepard, who was spent much of his time brush hand painting this beauty as described on his website myartcar.com. 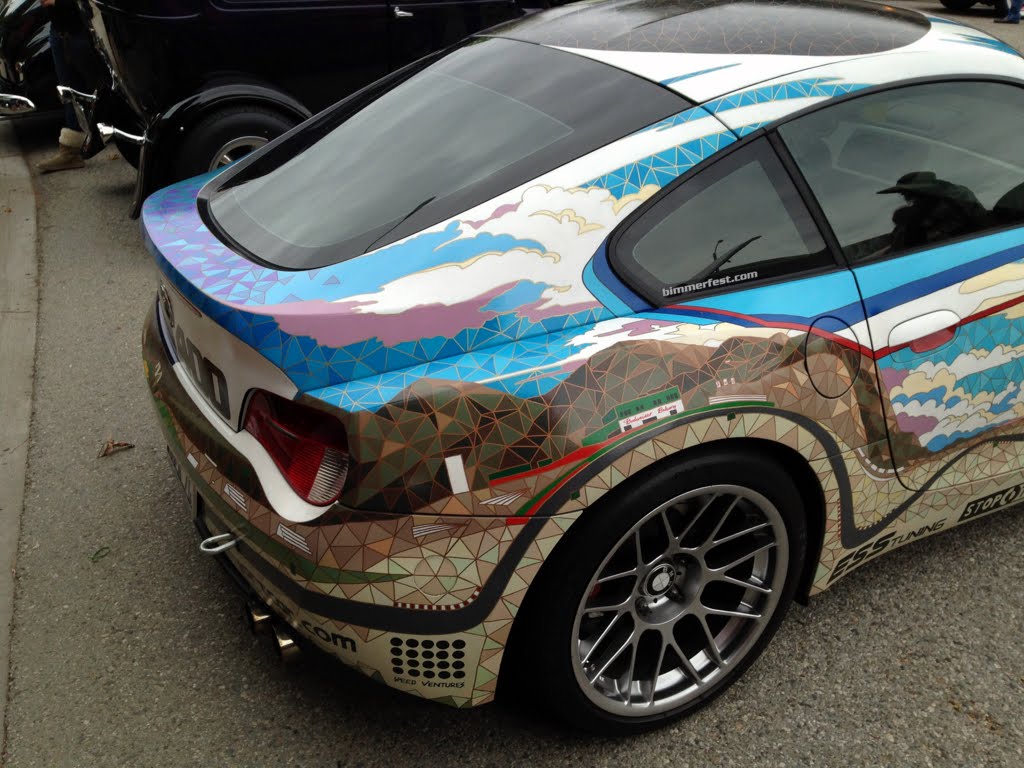 For those who have said the Z4 ///M coupe was the best looking car to ever come from BMW’s Chris Bangle era…well… somebody made one way cooler. 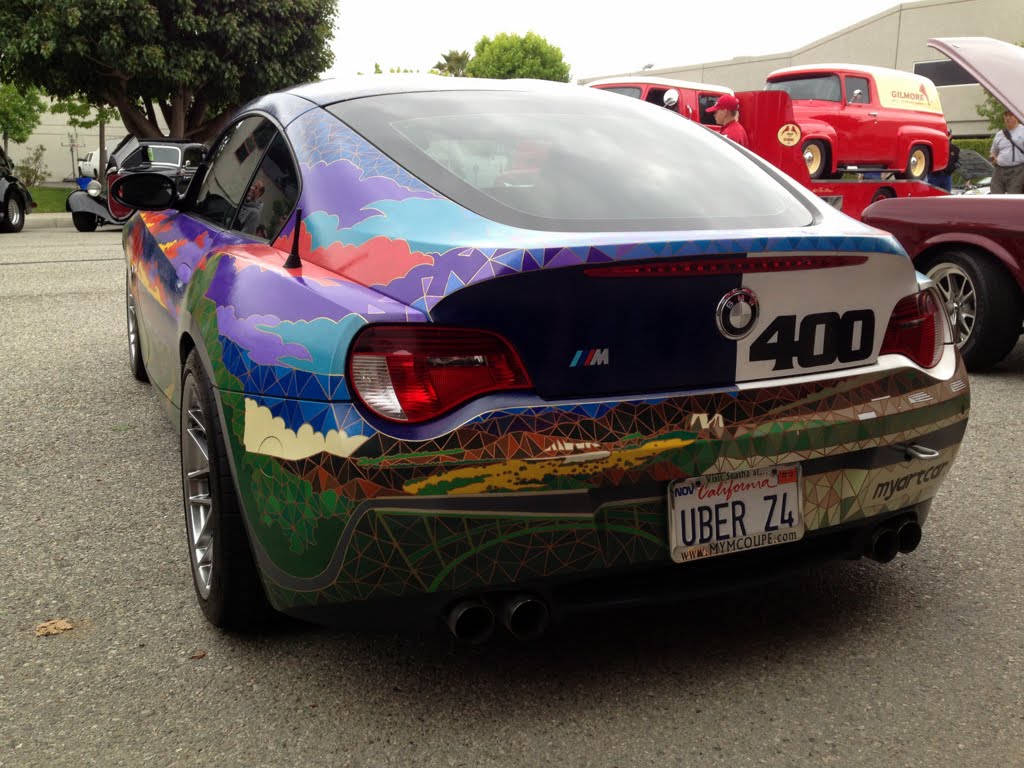 The detail up close was fantastic and we enthusiastically applaud this individual’s motivation and dedication to create something so unique.  If we owned this, we’d drive it to every BMW car show we could find just to see the purists cringe. 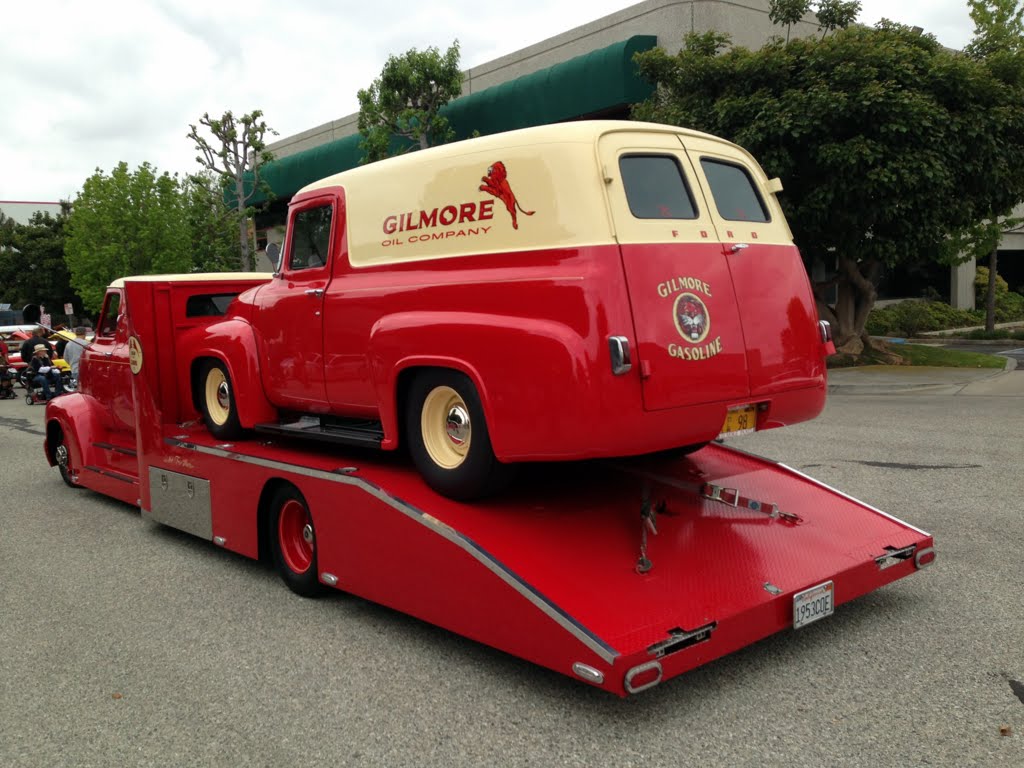 It isn’t just what you drive that is cool anymore, now vintage tow/hauling trucks are making a splash. 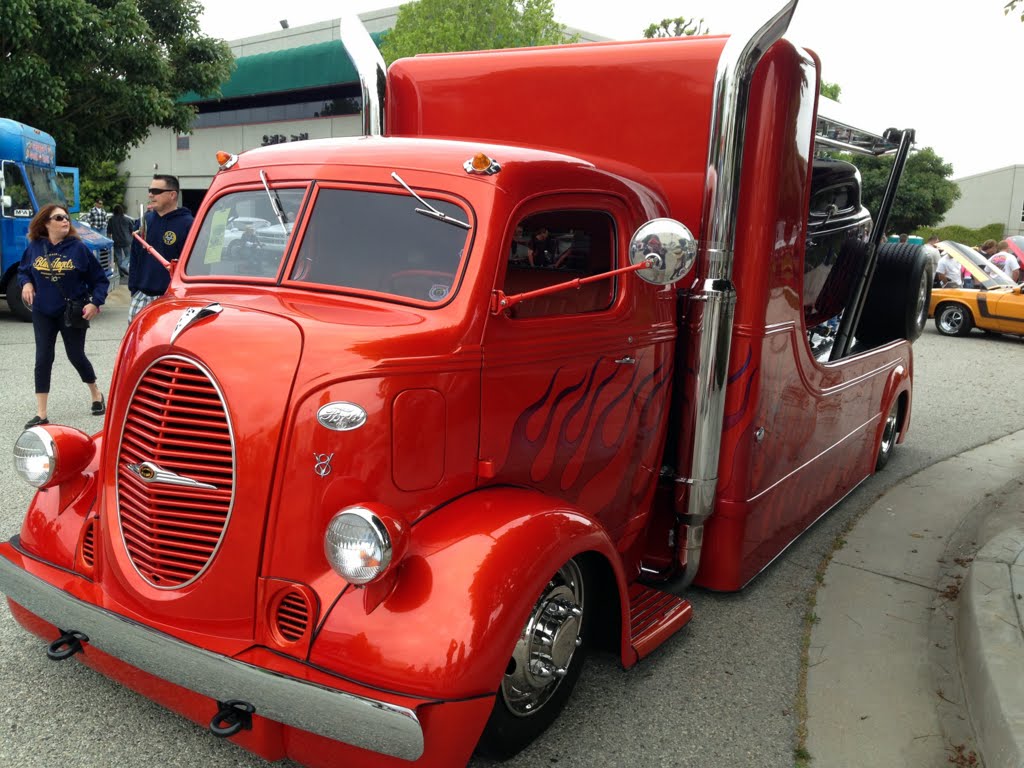 There were a few cool looking classic rigs on display and we can confirm the drivers were equipped with the appropriate concours-correct level of buttcrack. 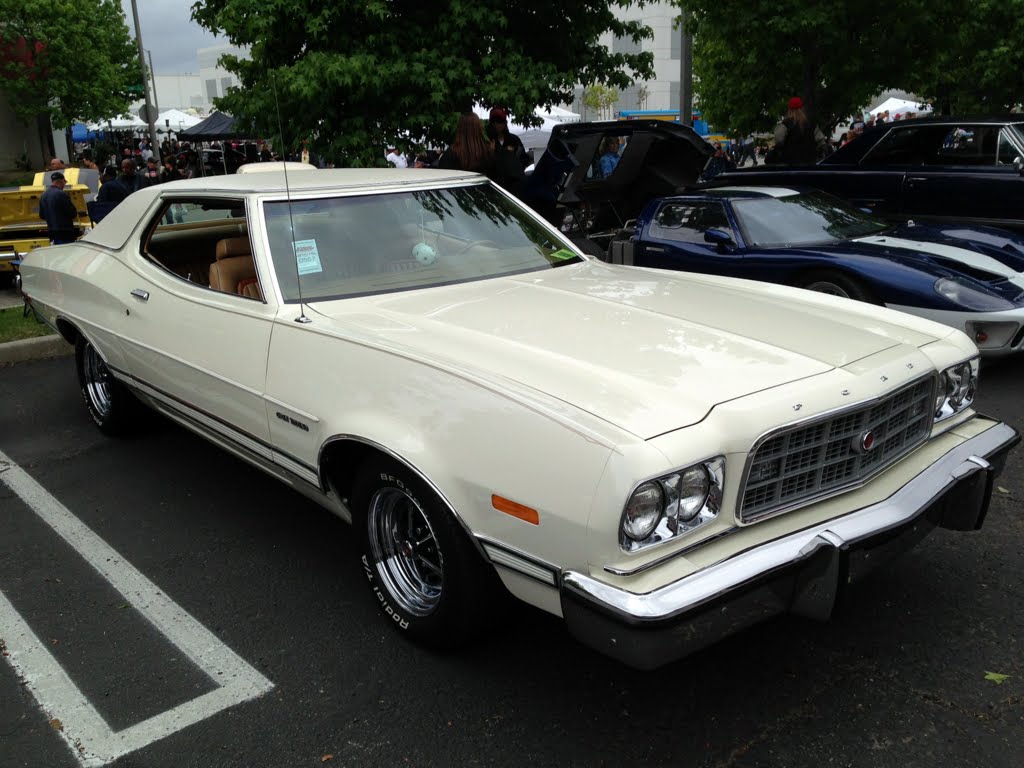 1973 Ford Gran Torino with 62k miles…look for a roadkill post on this one in the next few days. 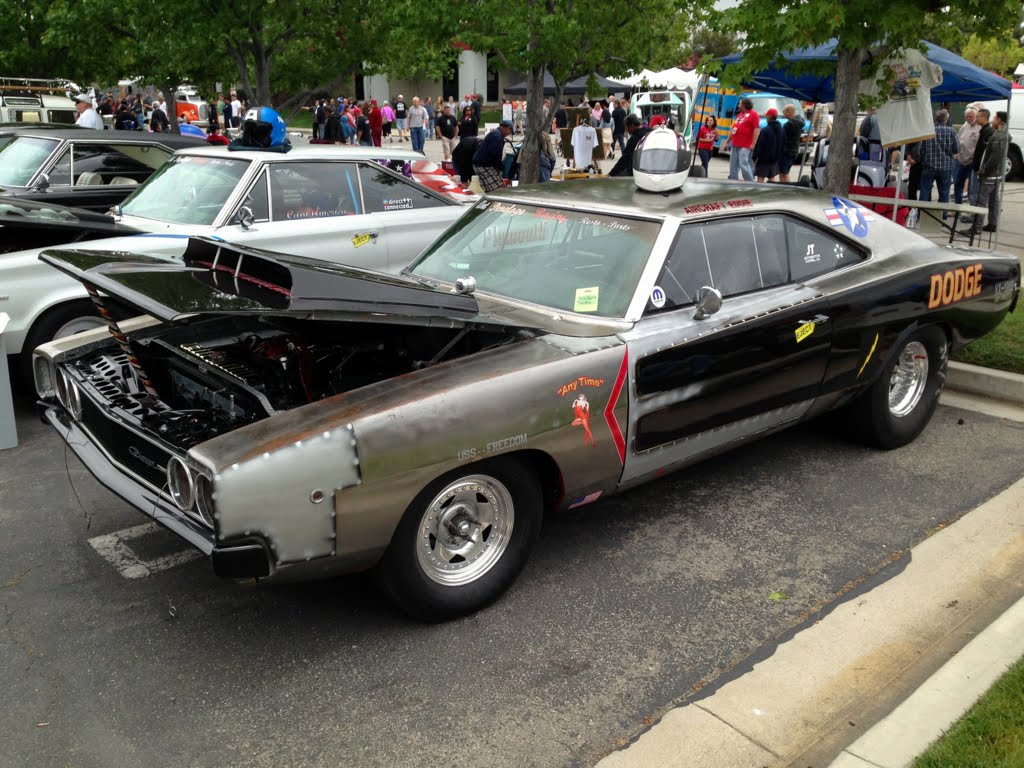 This Dodge Charger was prepared with a military theme and looked unique, but what really attracted our attention was under the hood… 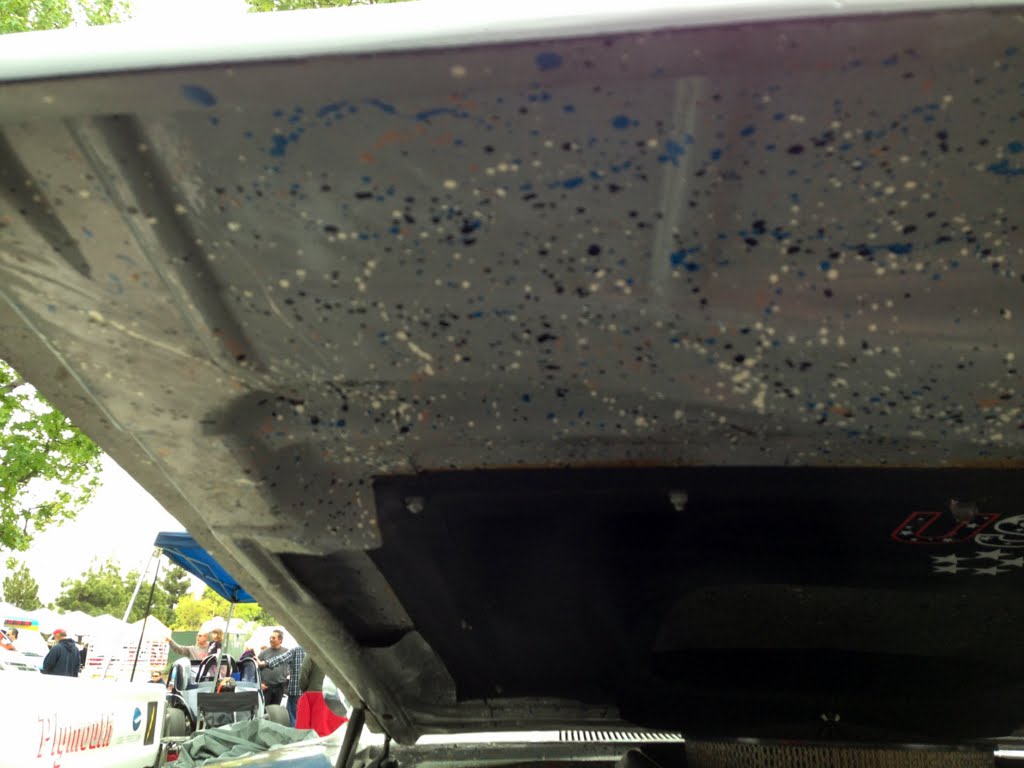 Can’t say we’ve ever seen a Jackson Pollock approach to underhood detailing before, but somehow it really worked on this car.  Reminded us of the DIY garage floor paint kits you can buy at LowesDepot and we can imagine that the effect is to distract from any defects, dirt, etc in the paint surface. 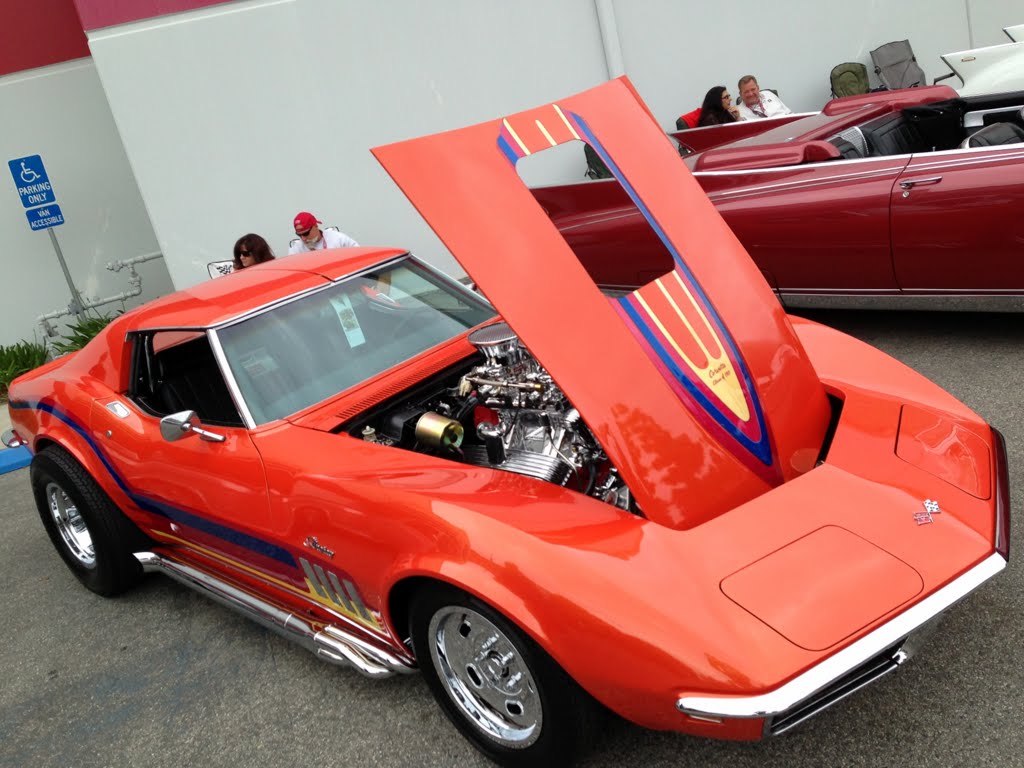 Another year gone by and the Rev’ved Up 4 Kids Tour produced a fantastic event and generated some money for charity while doing it.  Thanks to the Edelbrock Foundation for putting together a great collection of cars and next time I’ll try to remember to bring my dSLR so you don’t have to suffer through the iphone pics.

Got a few photos from a local car show that might include some roadkill? send us note: tips@dailyturismo.com