No, you don’t need to adjust your PC, iMac, or mobile device. You’re looking at a Bring a Trailer auction car on Daily Turismo. We like to think we don’t compete with BaT – they are clearly in the business of making large sums of cash, and we are more about entertainment – so why not analyze one of their exclusive auctions? Not to mention, this one is the most interesting of their recent auctions to me personally, by far.  Find this 1993 BMW E34 M5 Touring for sale in Knoxville, TN with bidding near $30k and over 4 days to go on BringaTrailer.com. 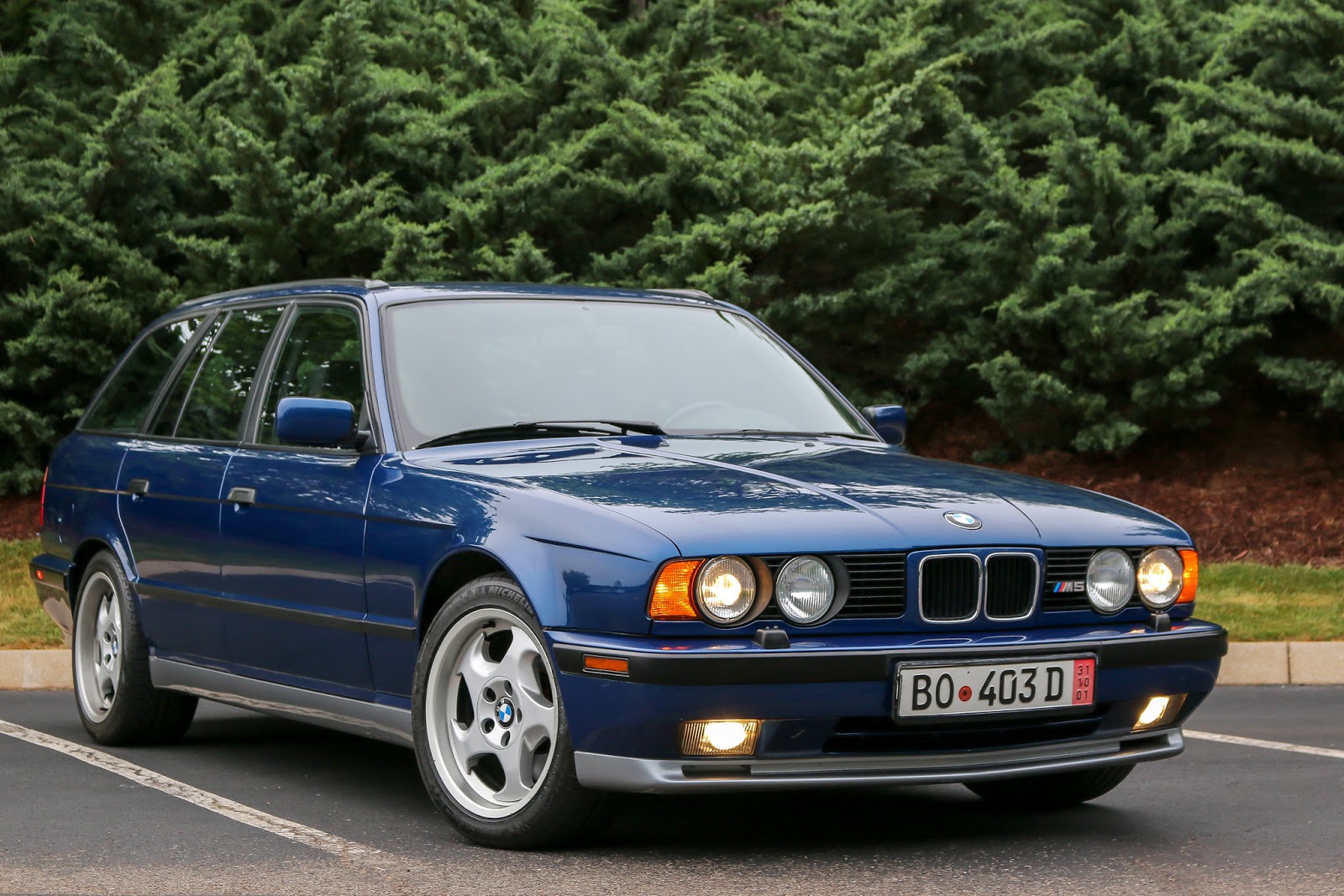 The reason this interests me so much is of course because there’s an E34 M5 sedan in my garage – the DTM5. The classic 3-box sedan shape will always be torsionally stiffer and quieter than a wagon, but there’s no denying the added utility of the 2-box wagon form factor. Hipster cool points are subjective of course, but I will say that I’ve wished my black sedan had a rear hatch and D-pillars more than a few times. 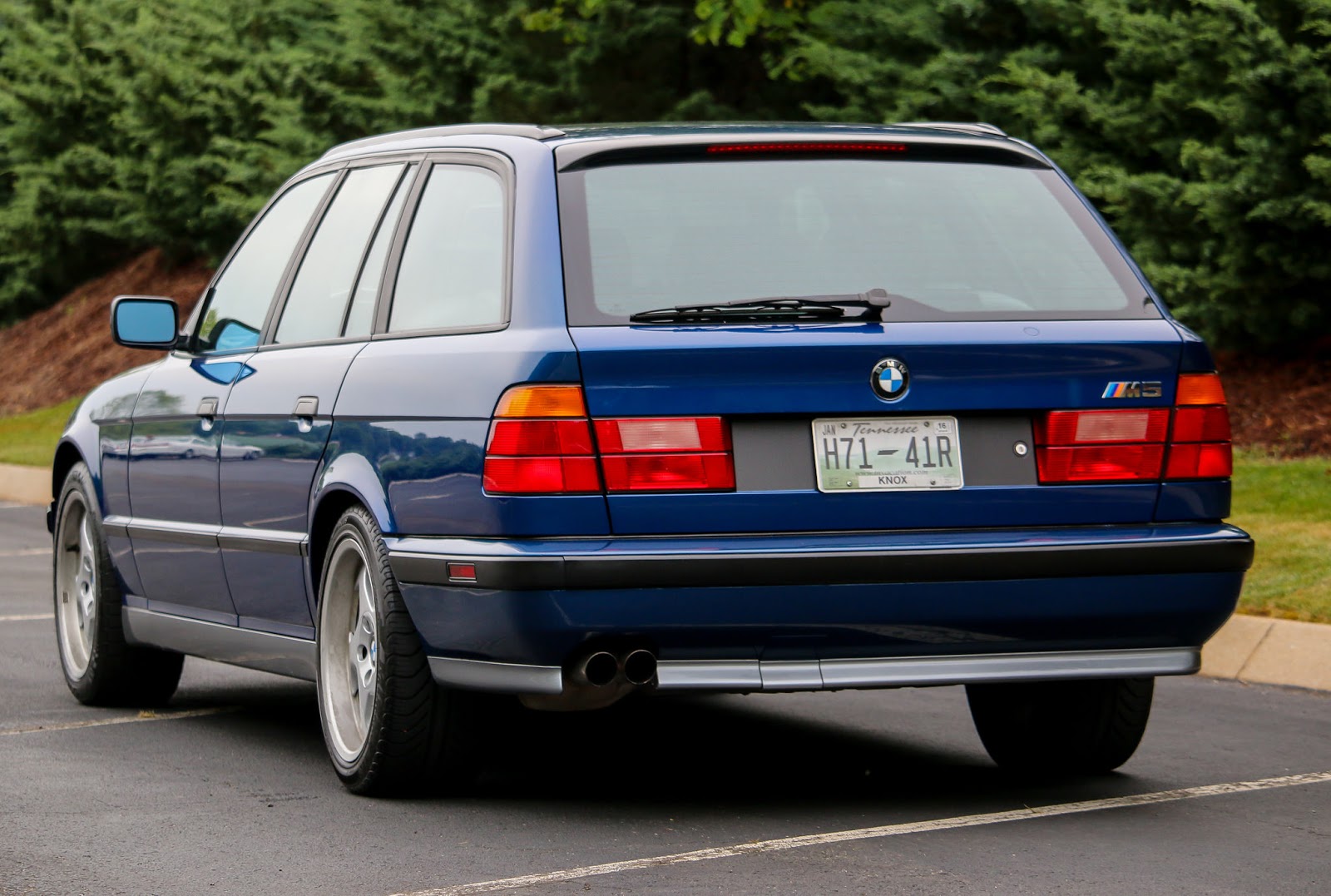 DT has kept a close eye on the E34 M5 market over the past few years – these were somewhat forgotten; not quite old enough to be classic but not new or powerful enough to be desirable by the daily driving masses, especially when compared to the 400hp V8 powered E39 M5. That seems to be changing, with values steadily on the rise for the past 2 years, and this Avus Blue wagon should give a good indicator of the top of the market. It’s a rare variant not sold here, plus it’s got the larger ultimate 3.8L version of the S38 engine and the 6-speed manual vs. the lowly Getrag 280 5-speed our Nordamerika-spec cars are saddled with. 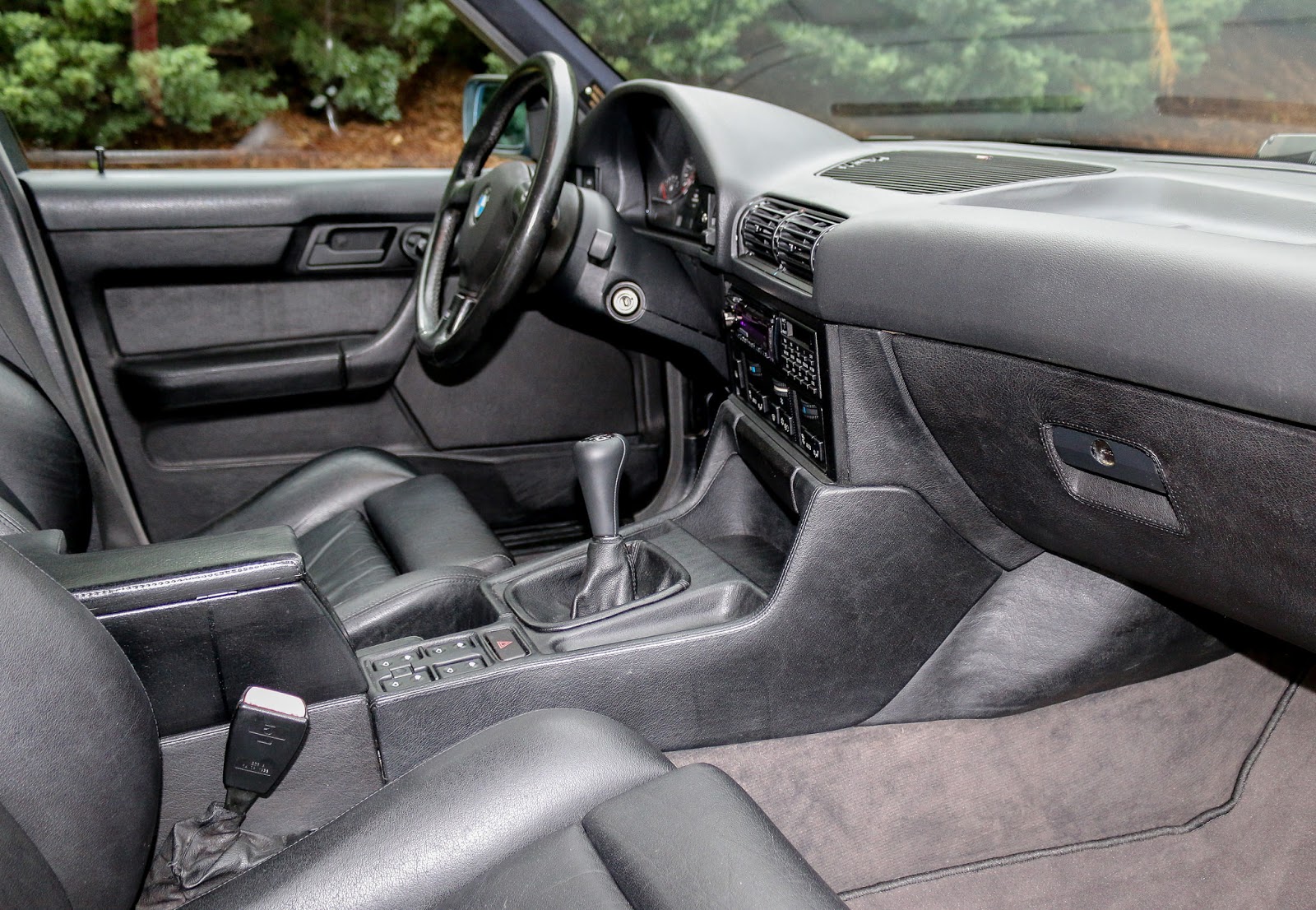 As if the body and drivetrain configurations weren’t enough, this car also has the sportier Nürburgring package suspension (although my ’93 has the ZF Servotronic speed sensitive steering too), and the swanky buffalo leather interior. Hey – there’s a taller center console mounted armrest in this car – I want one of those! Curiously, it lacks the wood trim found on every other E34 I’ve seen. Condition of course plays a big part in the strong bidding on this particular car; but yes, if it was a spanked fixer-upper, it would still command a premium over an equivalent condition 3.6L sedan. However, it makes more sense to import a really nice example if you’re going to go to all the trouble. We don’t see many scruffy E34 M5 wagons on this side of the pond for that reason. The last one we featured looked just as nice, and was going for $22.5k asking. 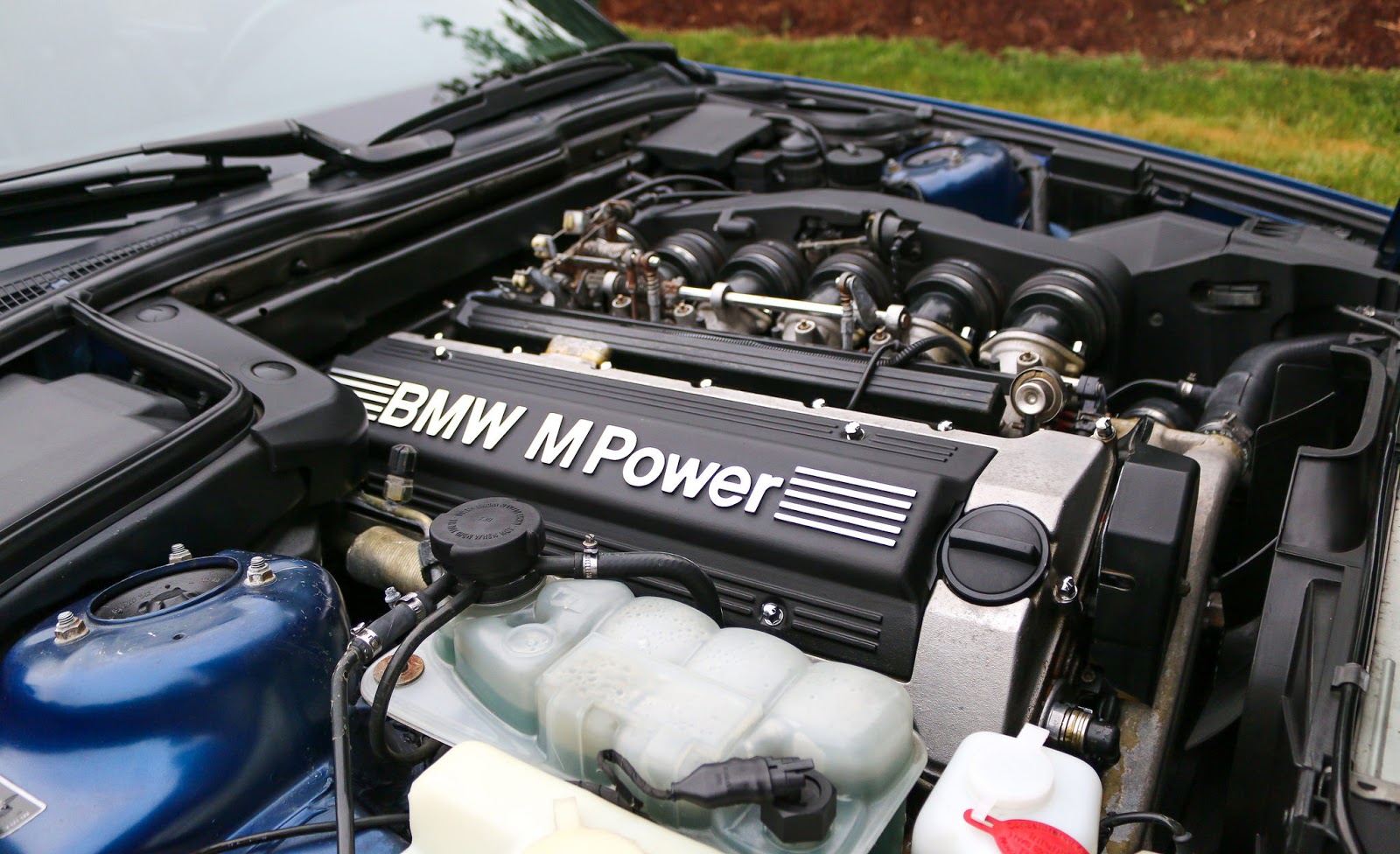 Thar she blows – the raison d’être for this car, in my humble opinion – the glorious S38 inline six. A half dozen individual throttle bodies are fed by the variable-geometry plenum and allow the 4-valve combustion chambers to aspirate freely. Sadly the bundle-of-snakes stainless 6-3-1 headers are hidden under heat shielding, but the whole shebang sings like a giant pissed-off hornet from 4000 rpm all the way up to 7000. 340 European hp at the flywheel is the result of the displacement bump over our 3.6, but I happen to know that higher compression pistons and tuning can bump that up about 10% over stock, if the DTM5’s rebuilt engine is any indication. These cars are fast for what they are, if not quite insane by today’s standards. 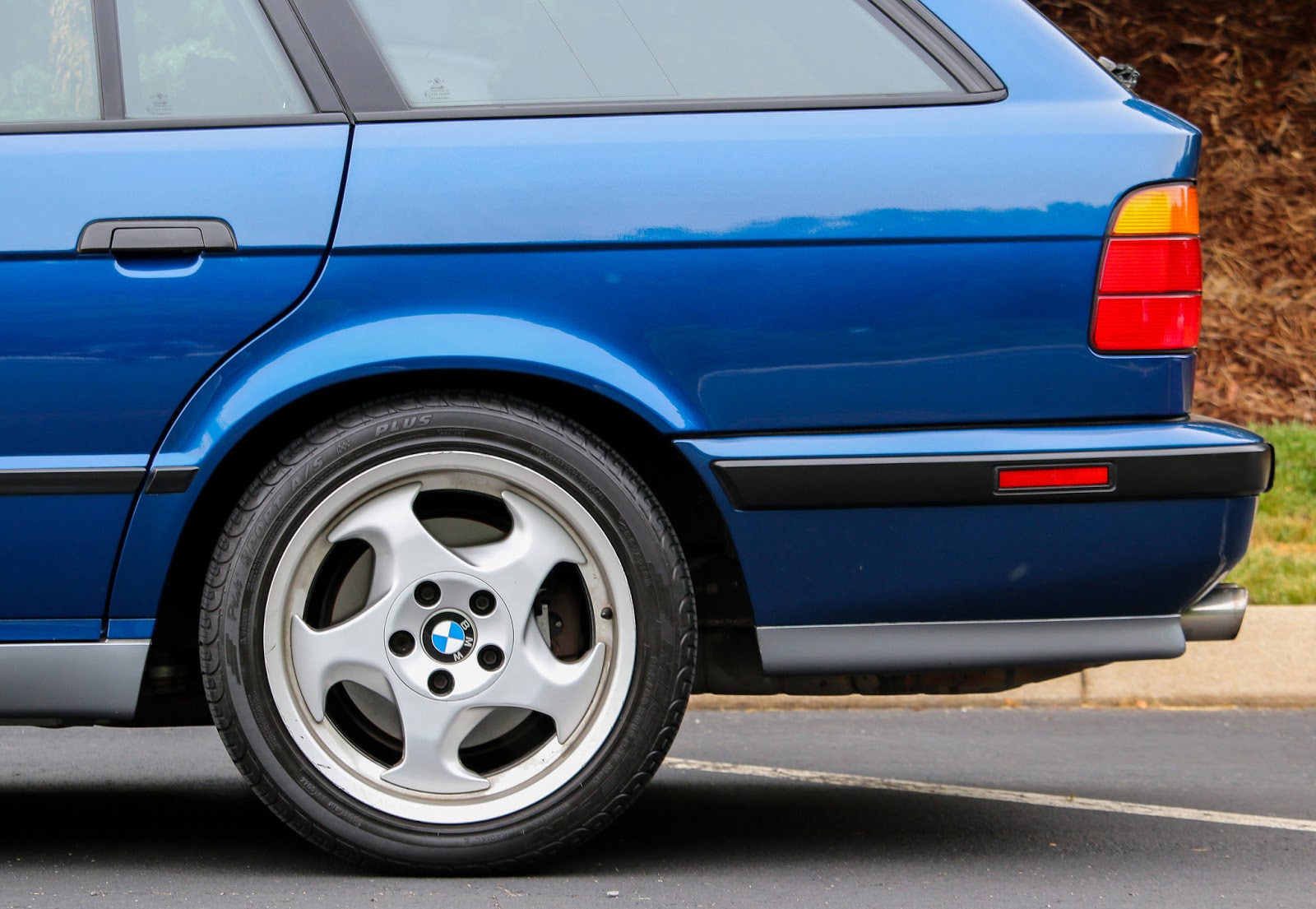 The “throwing star” covers on the M-System II 17″ wheels are original to these later E34 M5s, and really compliment the clean lines of the executive express. I’m partial to these stockers but I happen to know that these cars look great when lowered over ACSchnitzer Type II 3-piece wheels as well. In any case, I’m predicting a sale price near $35k for this unicorn, which can only mean rising tides for the sedans – bad for anyone looking to buy one – but good for those of us who hoarded a few years ago.

What’s your take on this E34 M5T and BaT’s auction format in general?

See a better wagon – I highly doubt such a thing exists – but if so, email us here: tips@dailyturismo.com