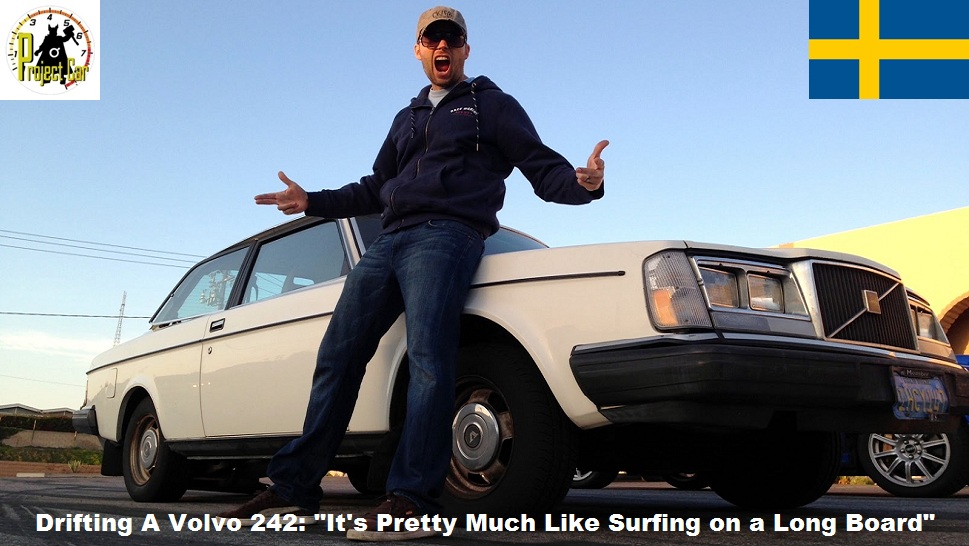 It is not often that we get the chance to have professional drivers hoon in our project car, so when professional drifter (no…not a hobo, the automotive kind of drifter) Carl Rydquist offered to give us a few tips in the Daily Turismo Project Car, our 1983 Volvo 242 DL, we jumped at the opportunity.

When a winning race car driver turned drifter offers to give you some pointers to hooning in an old beater Volvo 240, you say yes….emphatically yes!  Especially if that driver is Champion Sparkplugs sponsored professional drifter Carl Rydquist, who you may at first mistake for a German because he typically cruises around in BlueTec powered luxury sedans from Stuttgart, but you would be wrong.  Carl actually hails from the Volvo’s birthplace of  Sweden and this last year made the jump from a race driver in various GT cars to the Formula Drift circuit as a professional drifter.

Before you start in the comments talking about how drifting is the figure skating of motorsports, we want to point out that figure skaters need to be in top physical condition and spend many years honing their skills.  Furthermore, former GM Chairman Bob “Triple” Lutz has a figure skating move named after him, and if Bryan Boitano had offered to teach us some moves in the Volvo, we certainly would have given him the keys too.  We hope this puts all the figure skating/drifting comparisons behind us. 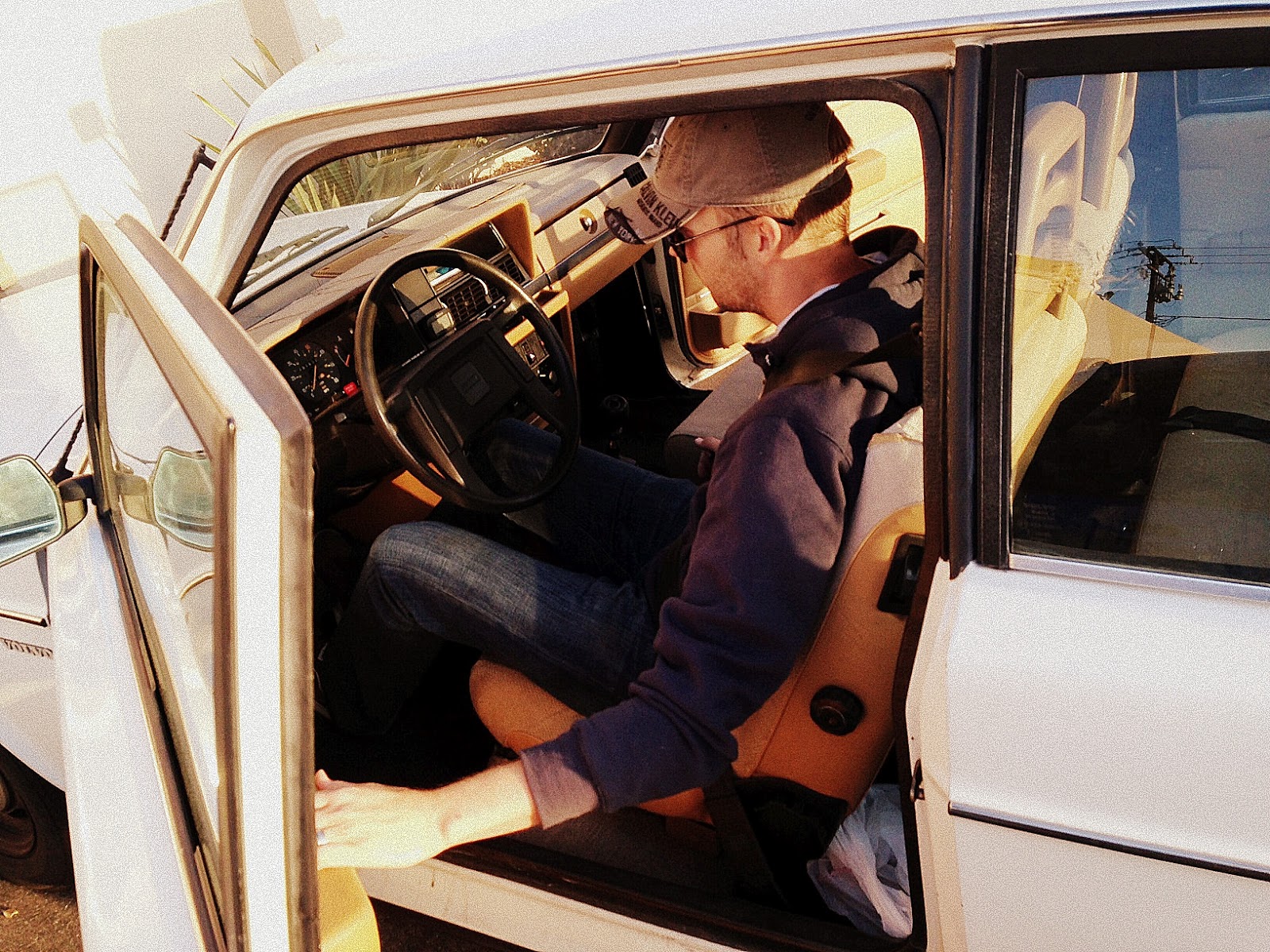 Getting back to the drift lesson, we unhesitatingly handed Carl the keys to the DTPC since he was eager to find the limits of the white beauty. He gave us the following sage comments:

A car like this, you have to handle with special care. Usually the key to a good show at the local “korvmoj” [kiosk for hot dogs in Sweden], is a 45 second burnout, while your buddy is getting the hotdogs. The 45 seconds is to give enough time to attract attention from the local youth, who would not want to miss what you are about to do. Once your buddy hops in with the plate of hot dogs and mashed potate, angles the plate forward and then closes the door, you have the right weight distribution in the car and it’s time to clutch out, bounce on the rev limiter (if you have one – the older models didn’t) for a couple of seconds to ensure the flywheel is absolutely up to speed, and to score points on the uniquely characteristic and charismatic engine fan sound. 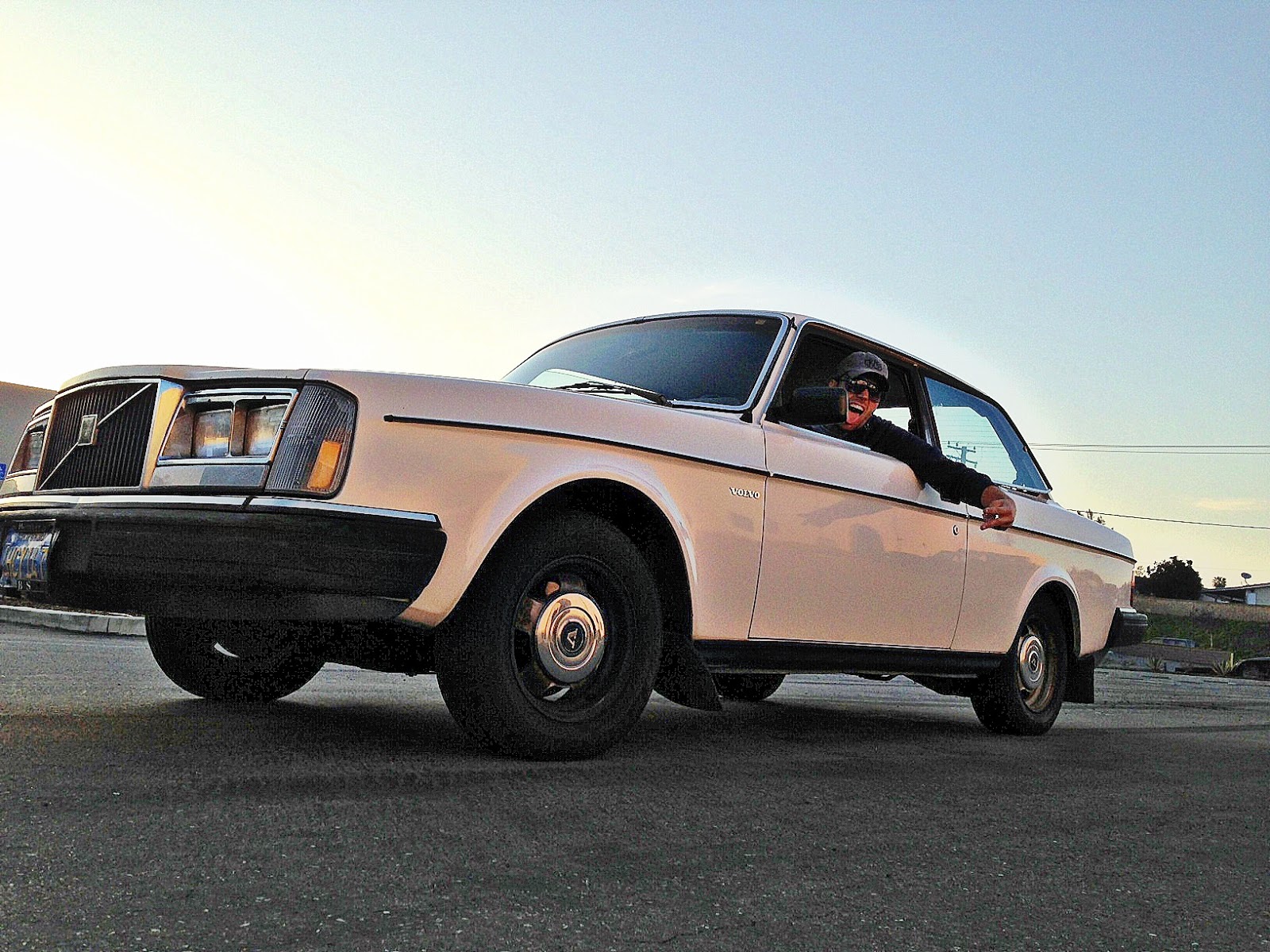 Then without further finesse, when everyone is at the peak of attention, slip off the clutch. At this point, beware that your burnout 100% likely only heated up one rear tire, due to the fact that the extremely smooth differential easily routes all the available power to the wheel with least friction, as any great open differentials do to eliminate all forms of [unwanted in some cases] forward traction. With this in mind, turn the opposite way of the hot rear tire as you initiate the “drift’, this will allow the hot tire to slide out, while the inside wheel now spins through the 100% distribution of power by sophisticated torque vectoring of the smooth open differential, thus simulating actual drifting despite the lack of a welded rear axle. 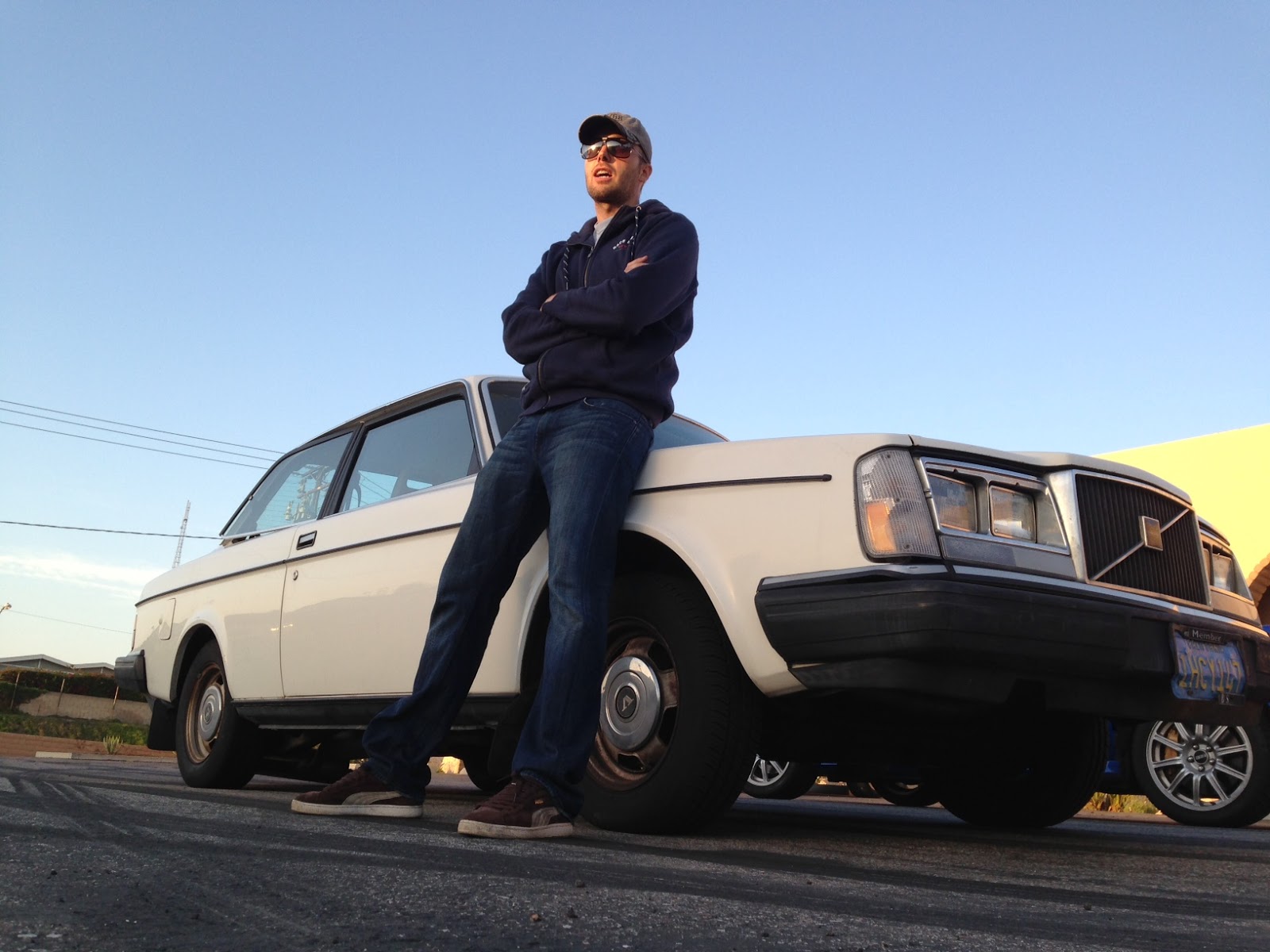 The other option is to just go much too fast into a turn and do a traditional Scandinavian flick. It’s a little bit considered as cheating though as it’s involving speed, rather than showing off the outright power and torque of the B2x “Redblock” engine. The precisely calculated soft suspension will happily accept the first little steering input to one side to compress one rear spring without protest, then kick back while you flick the steering wheel the other way and toss the live axle out, rewarding the driver with a wide, long slide that can be enjoyed for a comparably long time give the overall speed of a stock trim 240. It’s pretty much like surfing on a long board. All the pleasure is there. It’s just not as cool, but somehow, it is still kind of cool. 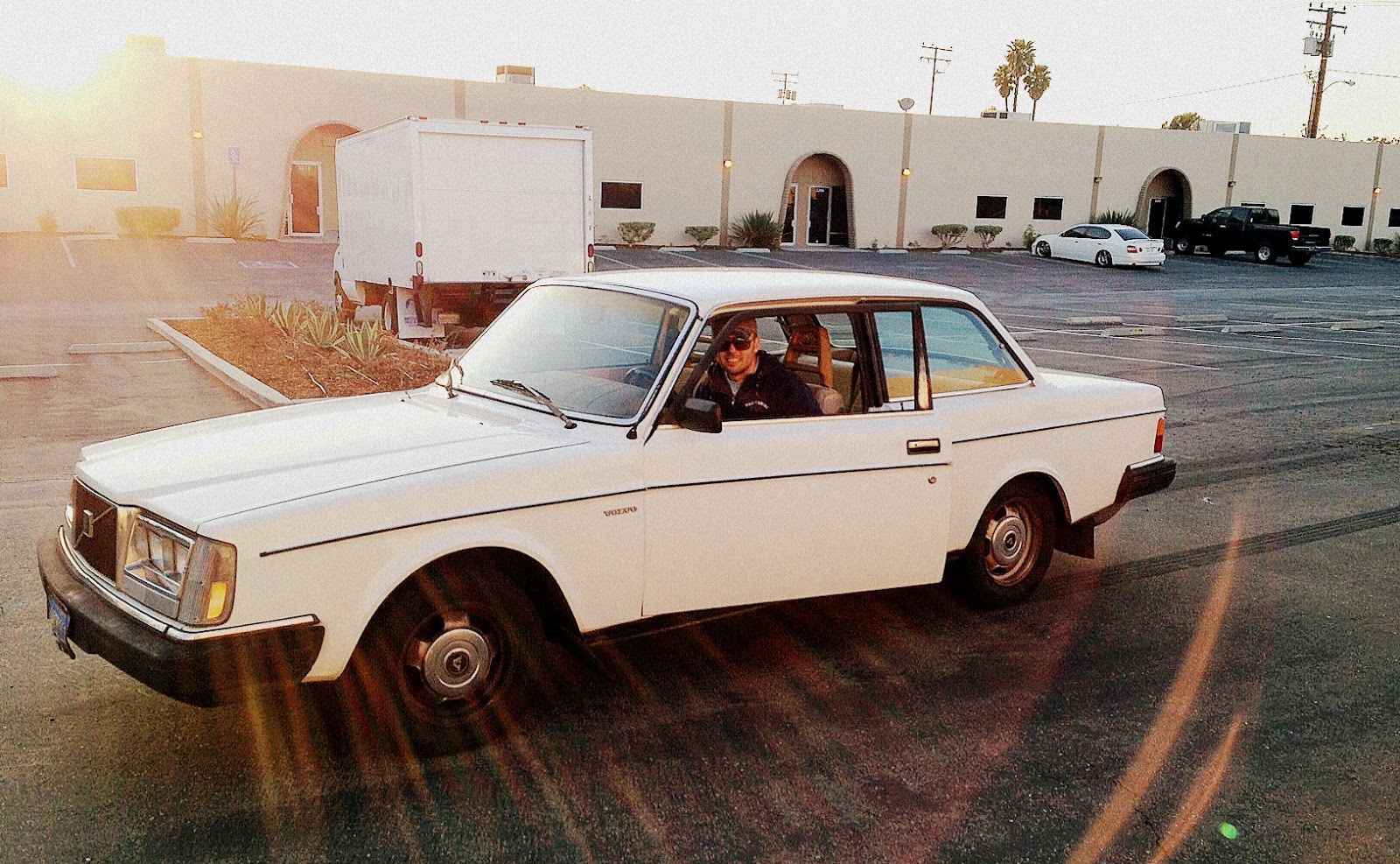 Carl shares our enthusiasm for cheap fun daily drivers and Volvo 240s in
particular, not only because he’s a Swede but also because these cars
are RWD, cheap, and fun…did we mention that? Our own CFlo’s ancestors
hail from Sweden and Norway and his family even has a 19th-century bowl
used by his great-great grandfather to hold lingonberries during the
long boat ride from Scandanavia to the US. Thus, we feel compelled to honor those that have come before us by hooning around in this 300k-mile example of svenska muskler.

After a few rev-bouncing drifts in a private parking lot, Carl managed to coax the DTPC into dropping its entire exhaust system from its hangars onto the pavement like a hot potatis in the snow….so we had to put the old 242 away before someone got hurt. Seriously, lingonberries and driving don’t mix. Carl says we need to weld the diff or swap in an LSD and a Garrett turbo (after all, a brick is even better as a turbo brick) to make the most of future drifting in this klassisk bil. But the 242 is “very regal” in his humble opinion.

Stay tuned for future adventures of the Daily Turismo Project Car and wish us luck in the IPD $25k Build-Off!