DTPC EFI System Upgrade: All Systems Are Go…Until They Aren’t

After getting our project 242’s electrical wiring issues sorted out, my easily distracted attention necessarily turned towards fine tuning, with the goal of making the engine run clean enough to pass the draconian emissions testing enforced by our great state of Californistan. In an effort to keep costs down making repairs while simultaneously improving the car, we took the opportunity to upgrade the Bosch fuel injection system to a later version…simply by swapping a few parts and reorganizing some wires in the new harness. Follow along as we convert from LH-Jetronic 2.0 to the later and oh-so-sexy LH-Jetronic 2.2. 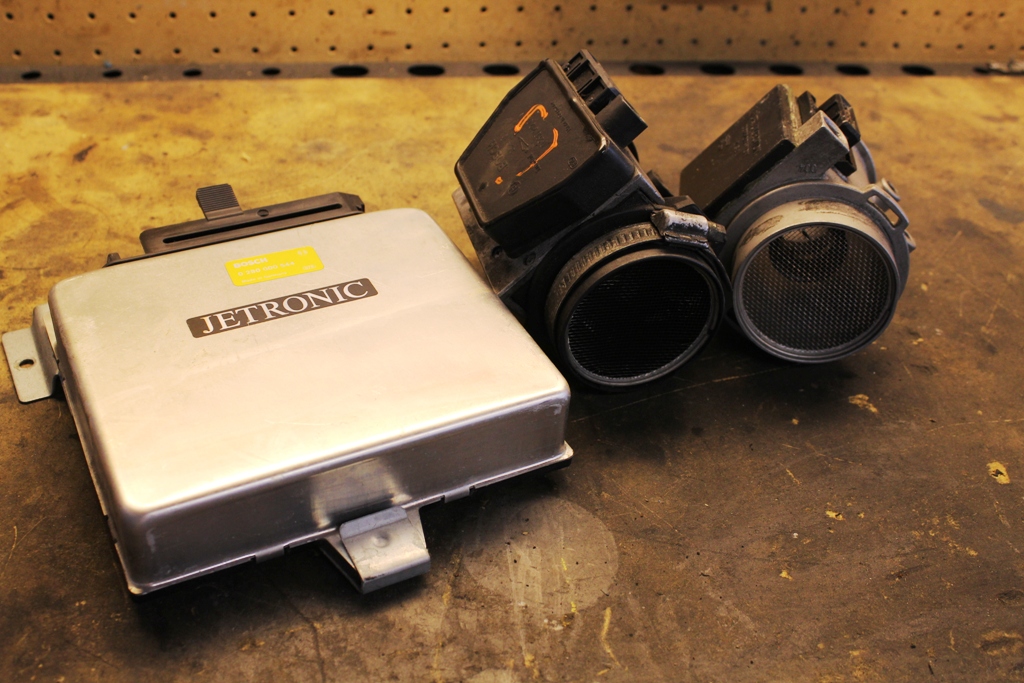 First a little background on Bosch LH systems is in order. From Wikipedia: “LH-Jetronic was mostly used by Scandinavian car manufacturers, and by sports and luxury cars produced in small quantities, such as Porsche 928. The most common variants are LH 2.2, which uses an Intel 8049 (MCS-48) microcontroller, and usually a 4 kB programme memory.” As discussed last time, the heart of the LH-Jetronic injection system is the Mass Airflow meter (MAF) which is used to measure the amount of air, by mass, flowing into the engine at any given time. This is the main determining factor that the ECU uses to decide the quantity of fuel to be injected. 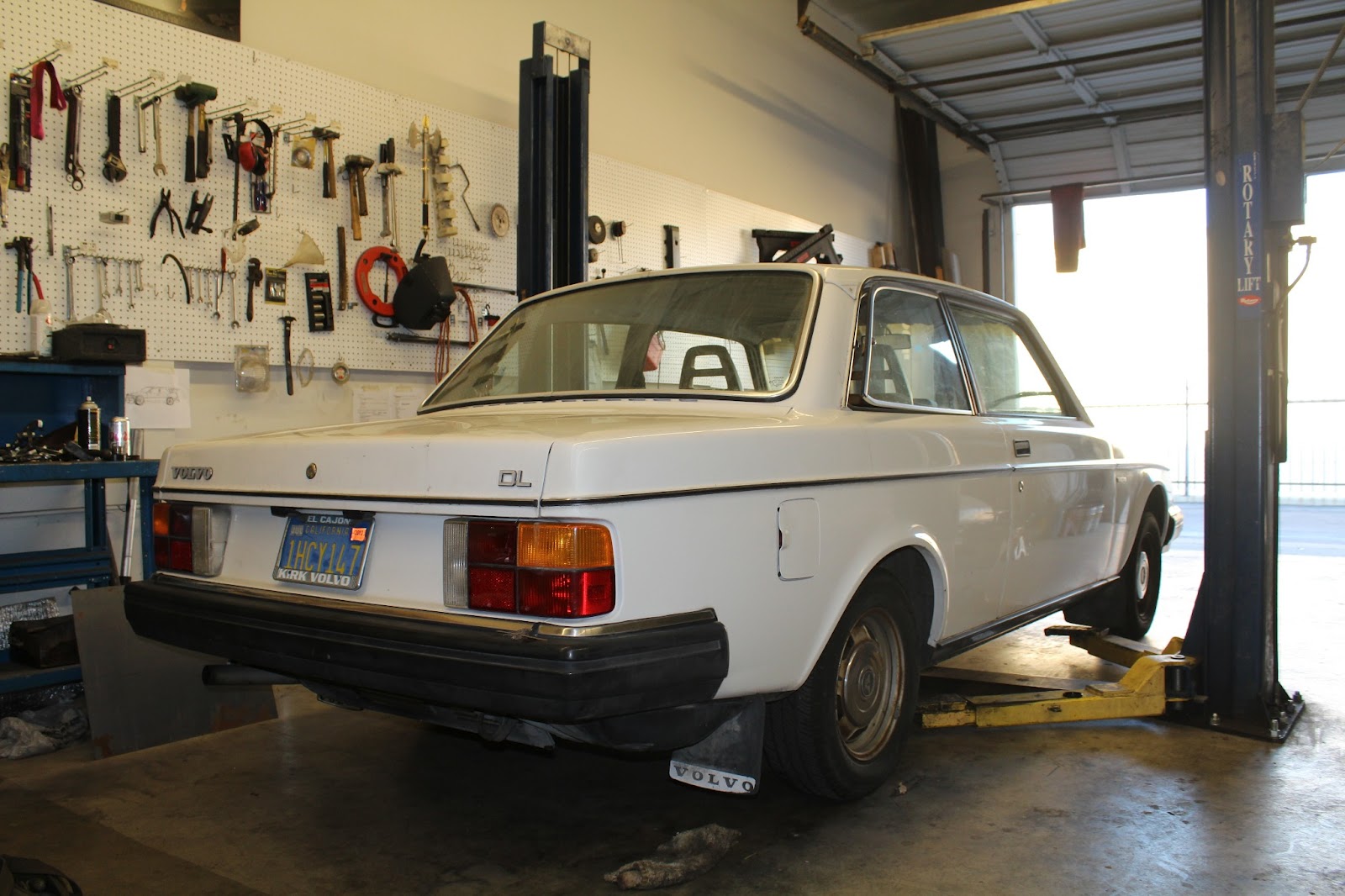 The Intel 8049 is the “brain” of the LH2.2 system, housed in the ECU box, and is a microprocessor chip that has seen a lot of action in the electronics world. This circa-1976 vintage 8-bit Intel processor was from the 8048 family that also provided the music for the original Donkey Kong arcade game, created the bleeps and bloops emitted from several ’80s synthesizers, powered IBM’s first PC keyboard, The Magnavox Odyssey2 video game console, and now finds its way into Chinese made low cost electronic toys and TV remote controls. After compiling this exhaustive list made possible by hours of research we are content to just let the 8049 determine the timing and quantity of fuel injected into our 2.3L redblock engine, and leave any further electronic geekery to the EE nerds who care deeply about such things.

The LH-Jetronic 2.2 system was used on naturally aspirated Volvo 240s from 1985 through 1988, but astute readers will note that the DTPC is a 1983 model and therefore uses the earlier LH2.0 variation. Functionally the two systems are very similar, but practically the main difference is in the Mass Airflow Meter (MAF), or AMM as Volvo likes to call it. 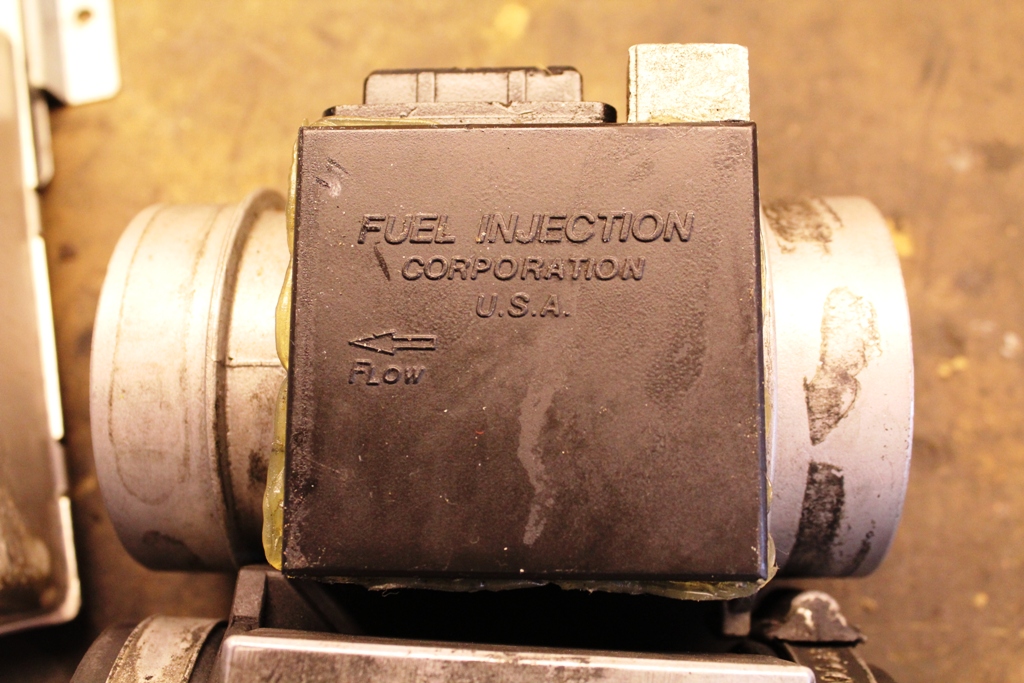 1983 and 1984 cars using this LH2.0 system have an aluminum body AMM similar to the one shown above that came installed on the DTPC when we bought it last year. This one has been previously rebuilt, as evidenced by the “Fuel Injection Corporation U.S.A.” emblazoned on the injection molded cover. This aftermarket cover glued on in place of the original Bosch plastic indicates the circuitry has been futzed with in some way during a rebuild process by this company, and is therefore a rebuilt unit. That in itself was not a major cause for concern, but as we expounded on previously, this AMM was toast…muerte, finis, and had to be replaced. 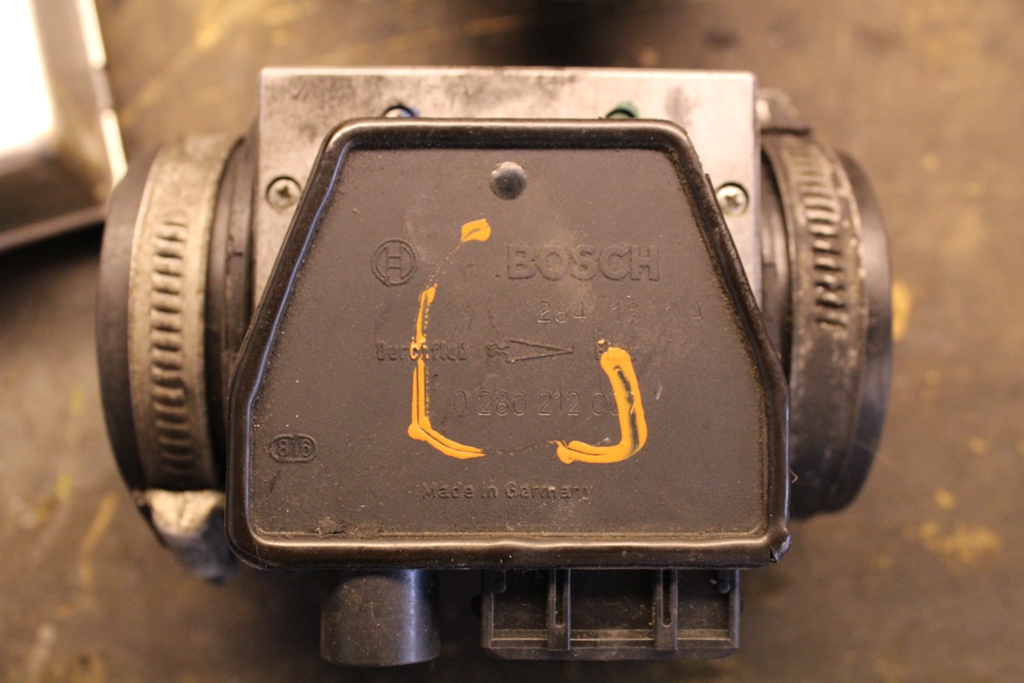 That sounds simple enough, you just go find one in the junkyard for the el cheapo solution, or pony up for a new one from a Volvo parts supplier, right? Well yes…if A) you can find an ’83 or ’84 240 with a working AMM in your local self-service junkyards (we couldn’t) and B) the new or rebuilt units are not prohibitively expensive. Unfortunately the two-year-only metal AMMs are very dear indeed. An aftermarket rebuilt unit from ipd will currently set you back $210.61 before shipping…ouch. More than we can justify. Not that this isn’t a fair price; supply is just very limited on these. The price is a full 25% higher than a later rebuilt LH2.2 AMM from the same source at $169.03.  For further comparison, an AMM rebuilt by the OE manufacturer Bosch will cause even more heartache (around $385 for an LH2.2 sensor, and that’s the more common of the two we are talking about here). 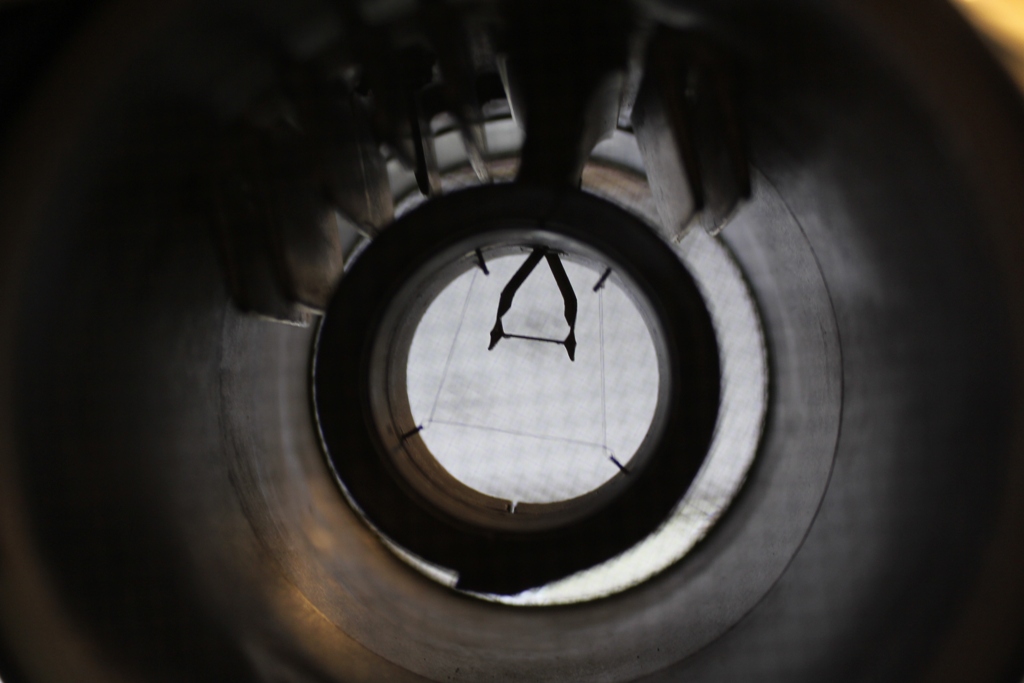 Even though the rebuilt option was better for LH2.2 AMMs, the main reason for converting to the later EFI system is the sheer quantity of donor cars available in self-service junkards today. The “007” AMM (last 3 digits of the Bosch part number) was used on 240 and 740 Volvos alike, and starting with the 1985 model year these are much more plentiful in the scrap yards than the ’83-’84 alternative. On a recent trip I found five or six decent 007 AMMs to choose from at one local yard, and exactly zero of the earlier “002” LH2.0 units.

Having the upgraded sensor available in mass quantities let us pick one up for around $50 plus a 30 day warranty for an extra $10, which is a great deal cheaper than a rebuilt unit even factoring the fuel costs to drive to the yard and the 30 minutes of hunting through rows of scrapped cars (which is worth the $2 admission price for entertainment/education value alone). If you are picking one up yourself, get the warranty and be prepared to go back and exchange it a few times until you find a good working meter. The one major junkyard quality check worth doing is sighting into the sensor body and making sure the hot wire is intact. As seen above it’s a very thin filament wire suspended by some standoffs, similar to an incandescent light bulb filament. The thicker “V” shaped protrusion in the flow path is a temperature compensation dongus. 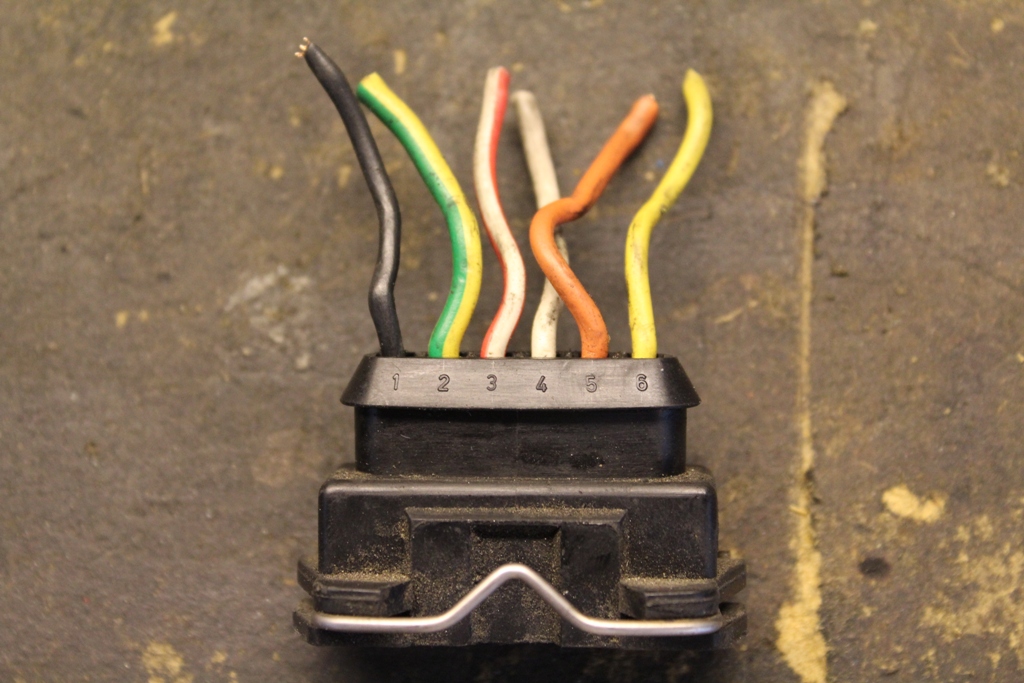 I clipped off the main 6-pin connector from the 1986 240 donor car I took the AMM from, mainly as a reference but also because it was by my definition “part of” the AMM and therefore free. It gave me a foolproof guide for the modifications I needed to make to my LH2.0 wiring harness; namely just removing the pins from the car’s AMM connector and rearranging them to match the LH2.2 pinout. For reasons that we won’t go into here, the 2.2 AMM is wired differently from the 2.0 unit but fortunately it takes the same connector and all the wires go to the same places in the main EFI harness…they just need to interface differently with the AMM. Since I already installed a nice non-crumbly newer aftermarket wiring harness I didn’t need to change the whole thing out for a 2.2 harness, but that would be one solution if you needed a replacement for your original. 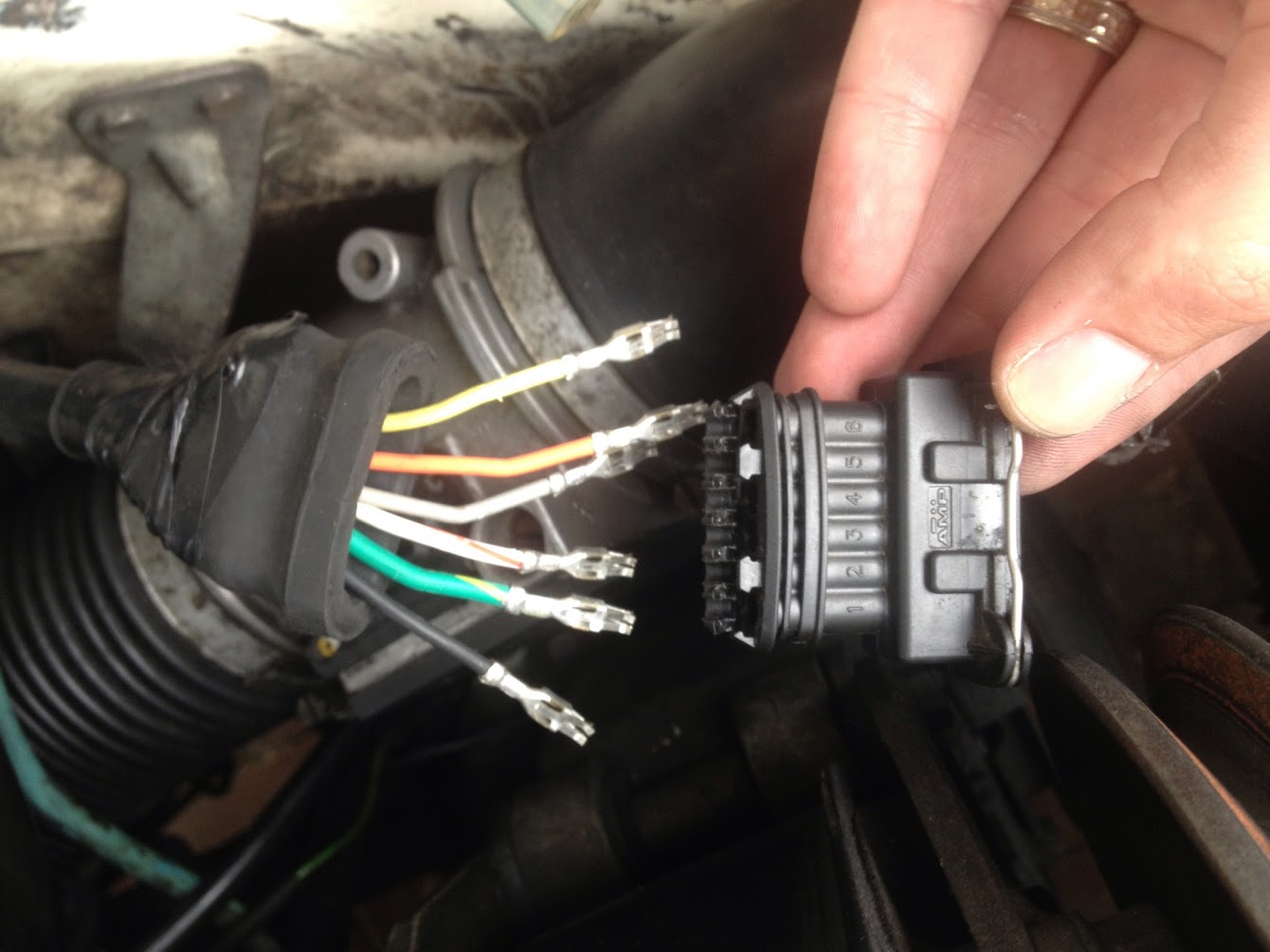 Here we see the wires removed from the LH2.0 harness AMM 6-pin plastic connector housing; I have already rearranged them in this shot but originally they were, from pin 1 to pin 6: green/yellow, white/red, gray, orange, yellow, and black. To get these pins out you need to first pull back the rubber boot. Then find a minuscule flatblade jeweler’s screwdriver or other small, flat prying tool to straighten out the retention tab and allow the crimped end to be released from the plastic casing. Suffice it to say it’s easy to screw up the soft plastic, just take your time and feel around with the screwdriver until each individual connector pulls out of the housing easily. Then bend the tab back up so the connector stays put when reinserted in its new home. 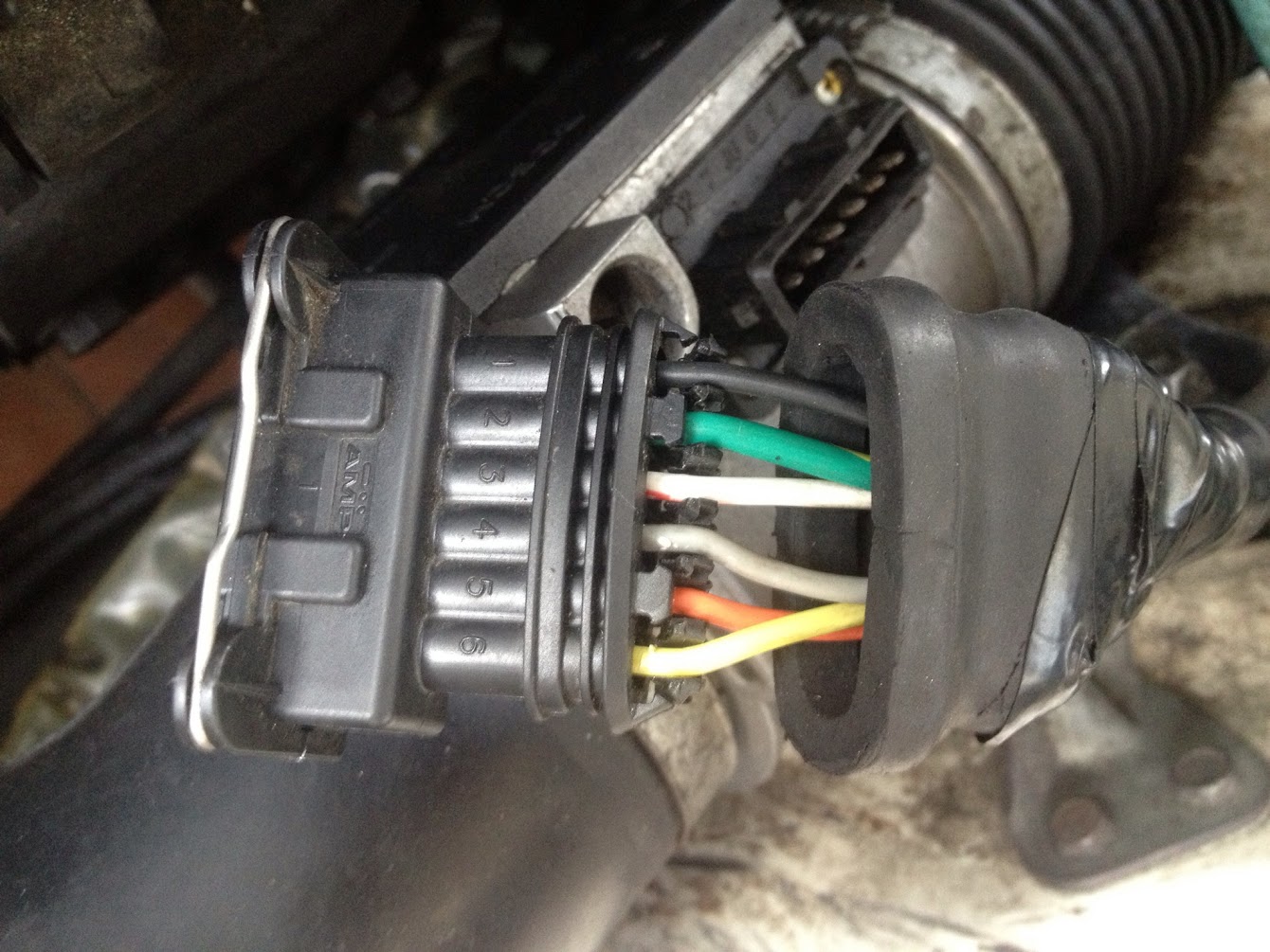 I double-checked the LH2.2 (1986) wiring diagram in my Volvo 240 factory service manual and verified it matched my junkyard reference connector. You never know…someone could have rearranged the wires on a 27 year old EFI harness so I did not take anything for granted. The wiring diagram matched the example so I rearranged the wires as follows, again from pins 1 through 6: black, green/yellow, white/red, gray, orange and yellow. The gray wire in my aftermarket replacement harness was solid white on the OE 1986 harness but by process of elimination I determined these were one and the same, functionally. Push the wires back into the housing, fold the plastic locking tabs down, snug the rubber boot over the end and plug the whole thing into the new AMM, and you have a converted LH2.2 system. Except for one thing… 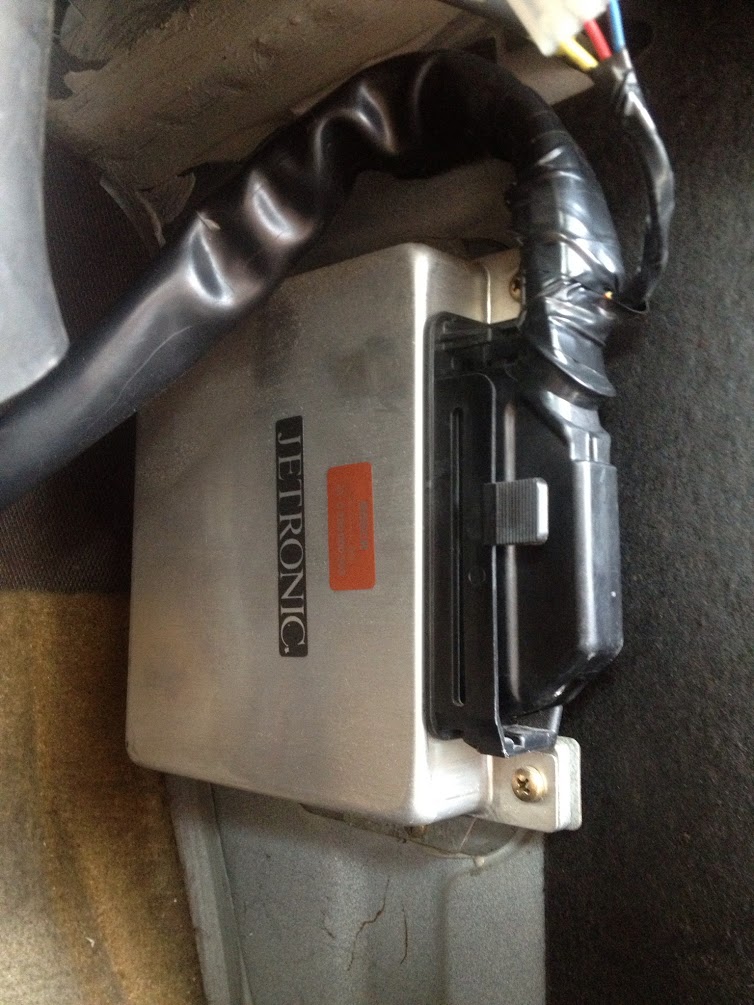 …and that is the ECU (electronic control unit) that makes the whole thing act like a fuel injected engine and not just a lump of iron enshrouded by copper spaghetti. It lives in the passenger’s side footwell, behind a plastic cover just ahead of the door hinges in a 240. I removed this ECU from the same 1986 donor car as the AMM, but according to several sources there are three different part numbers of ECU that will work for this conversion. Ian at Hi Performance Auto Service says that any of the following part numbers will work: 0 280 000 511, 0 280 000 544, 0 280 000 554. I happened to find an ’86 which used the -544 ECU.

Combined with the -007 AMM and the wiring rearrangement the engine fired up immediately after the conversion and has been running well ever since. Now we have no need to fret about a two-year-only sensor that might break the bank and we can easily replace our AMM with another $50 junkyard unit anytime it decides to die.

To be fair, last update I implied that we’d be exploring smog test results in this installment, but that deserves its own dedicated writeup which will be tapped out by cigar smoking monkeys once I can get them to use the Blogger interface instead of those damned noisy typewriters.