Ok, it may not be Thursday anymore, but here at DT any day is Thorsday! Today we have a special treat – the ultimate Volvo 240. Regardless of price range, how often does an original touring car factory racer come up for sale from the Swedish stalwart? The answer is… not very. In 1983 Volvo decided to take on the likes of BMW, Alfa Romeo, Audi, Jaguar and other sporting brands who competed in the top level of touring car racing (that’s production based cars bombing around road courses, if you’re not familiar). They kicked some arsel in both the DTM and European Touring Car series, as a full-fledged factory team. The cars made around 350hp from their 2.1L turbocharged and water injected 4-cylinder Redblock engines. Find this 1984 -86ish Volvo 242 Turbo Group A race car for sale in Falkenburg, Sweden for an unspecified number of suitcases full of Kronor… via racecarsdirect.com. 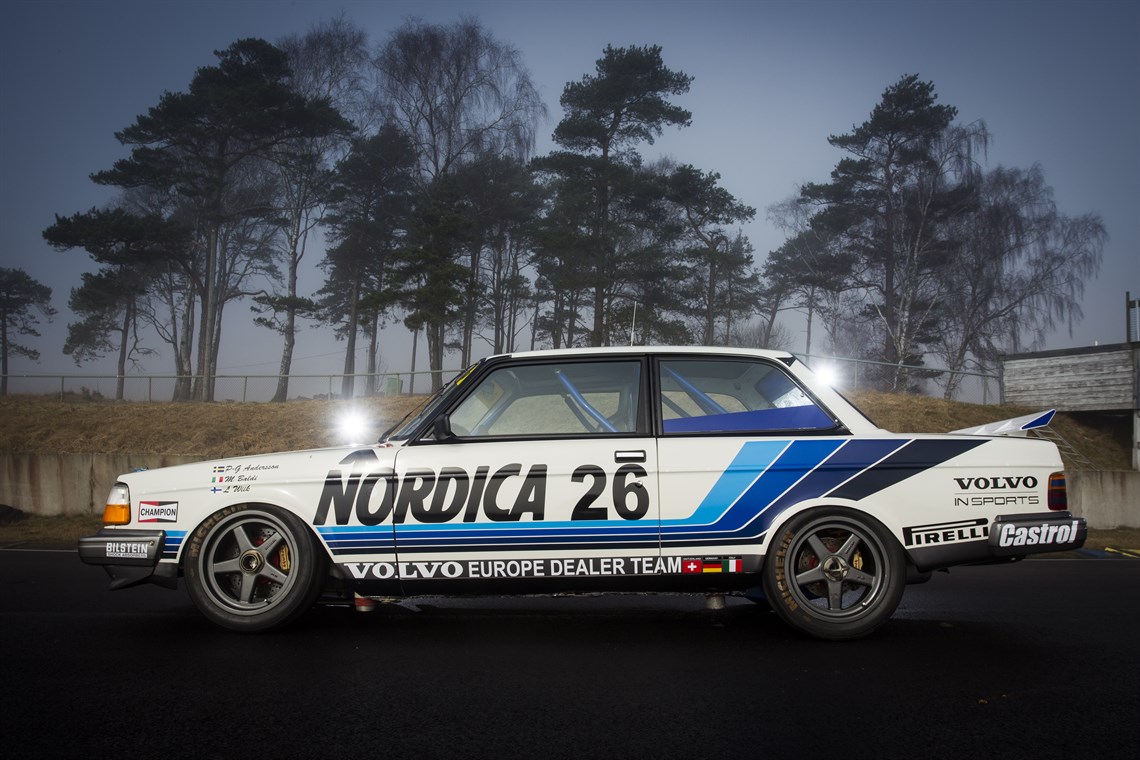 None of us here on the DT staff could ever hope to afford this thing…but that won’t stop us from drooling over its sheer demonstration of awesomeness. First, a bit more history. For the Group A set of touring car regulations, manufacturers and privateer teams had to stick to strict guidelines when developing their machines. These had to be production based cars, meeting power-to-weight ratio limits, and developed to a price point. To obtain racing homologation a certain number had to be sold to the public (there is some debate about whether this was 500 or 5000 cars, but our sources say 5000) which Volvo did – albeit in stripped-down fashion and without most of the racing kit. 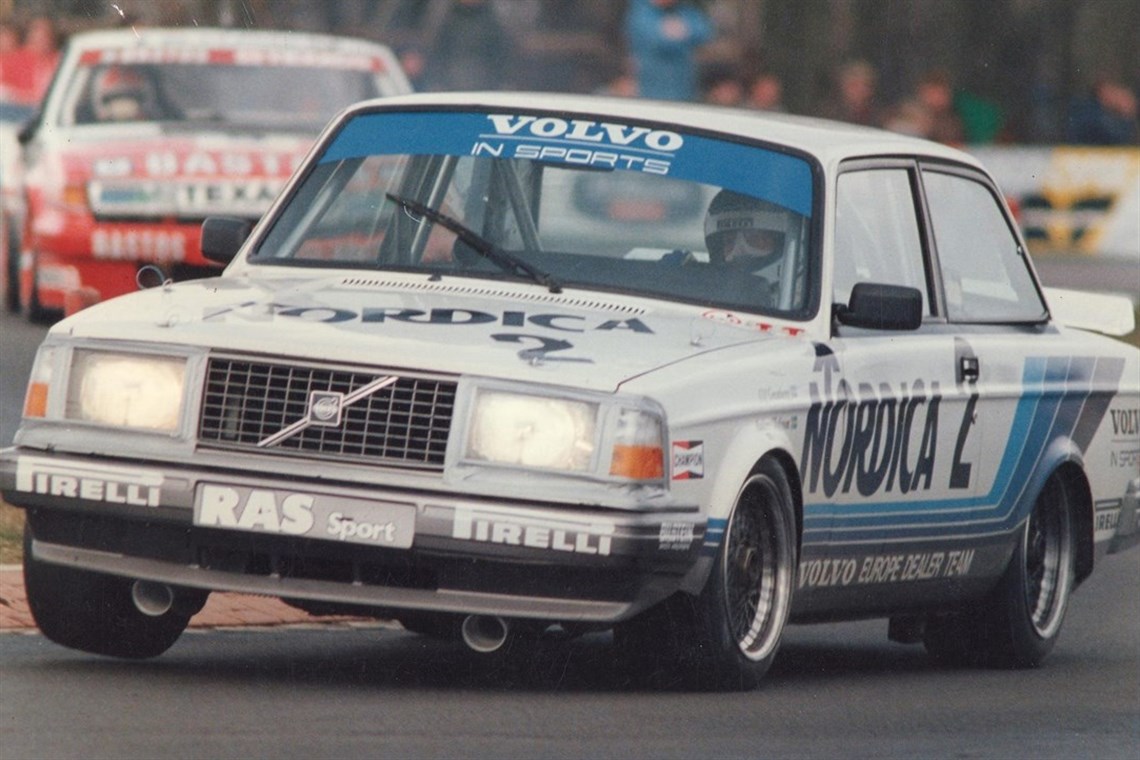 Volvo chose the 242 2-door sedan as it was the stiffest, lightest production car in their stable in the early ’80s. Really the only one at that point, if you don’t count other 240 variations as being separate models, but they did offer 4-door sedan and wagon versions, along with the 262C Bertone coupe and the 260 series, essentially luxe-ified 240s with PRV V6 engines. 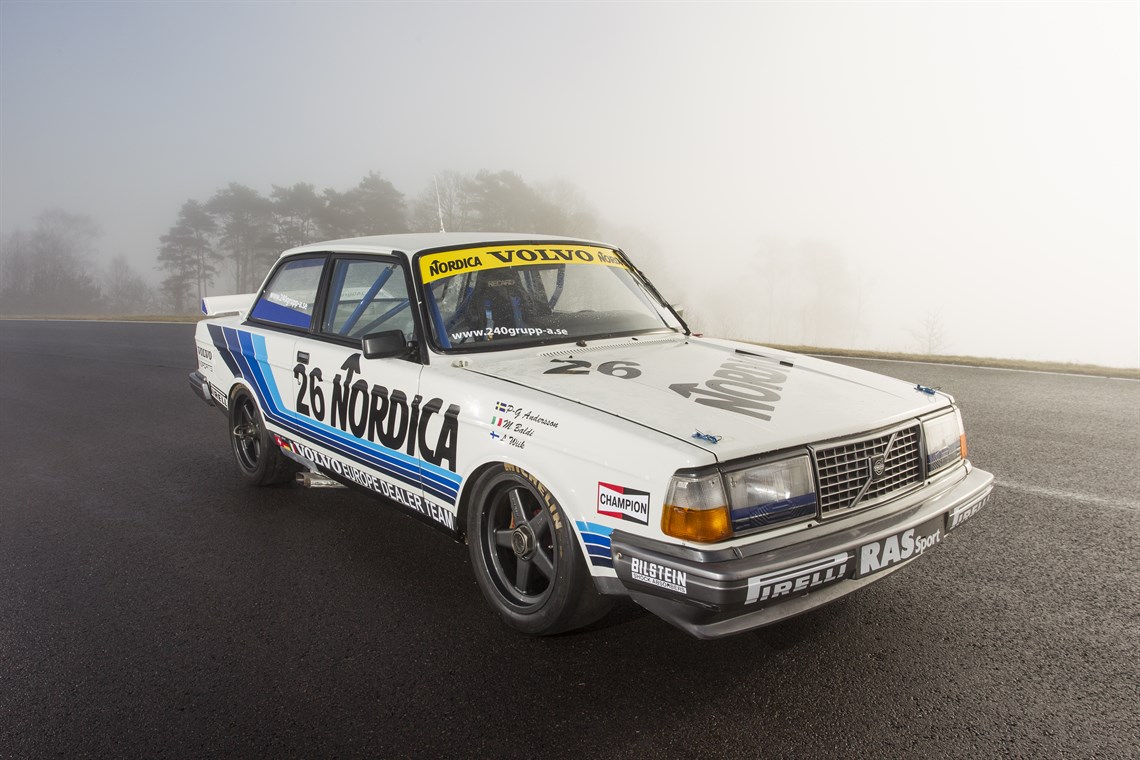 But the 242 Turbo Group A car wasn’t just another 240. This had a bad-ass aluminum cage, everything you needed to go fast around a road course, and nothing you didn’t. Wheels eschew the usual 5-lug arrangement for centerlocks and massive finned aluminum hubs. 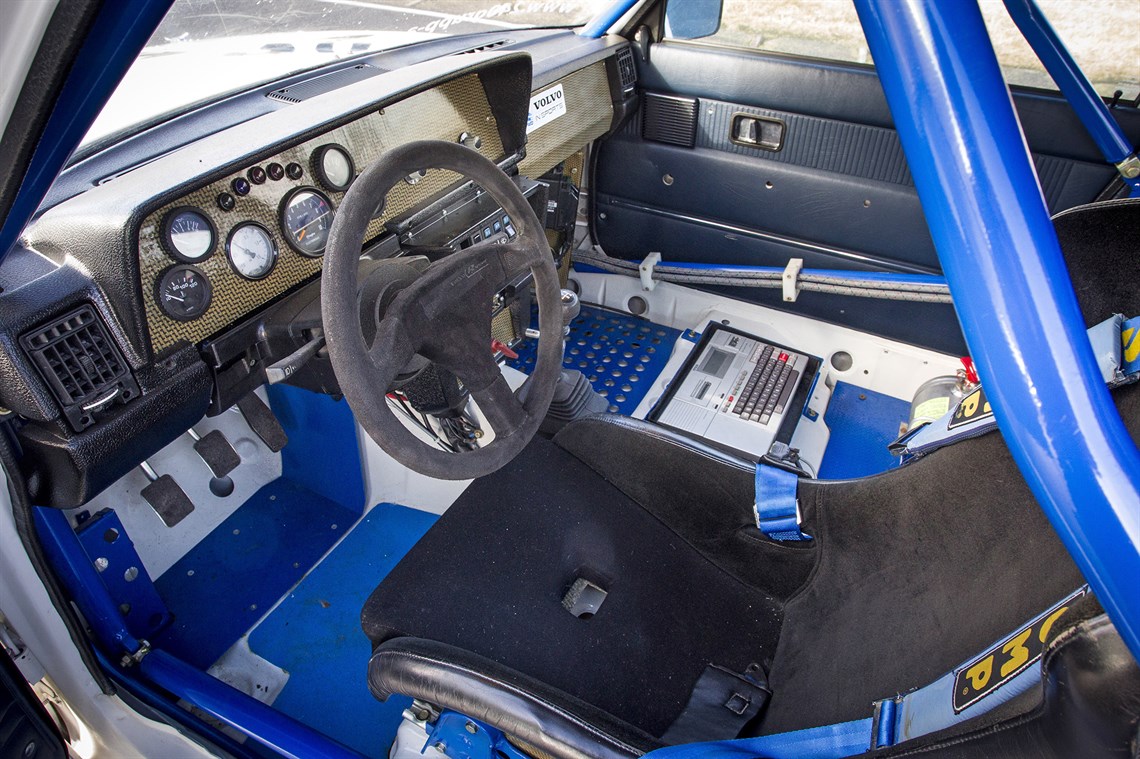 The familiar 1981-1993 240 dash is in place, as are standard 242 door cards (with speaker grilles!) but nothing else except the pedal arrangement is really recognizable inside. The steering wheel is an oh-so-sexy all suede version of the Volvo R-Sport aftermarket accessory wheel, and the gauges are arranged logically on a simple carbon/kevlar panel spanning the dash. Gearbox was a 5-speed sequential Getrag, and the blue painted cage is actually aluminum – tell that to your Volvo “weighter” conspiracy friends. 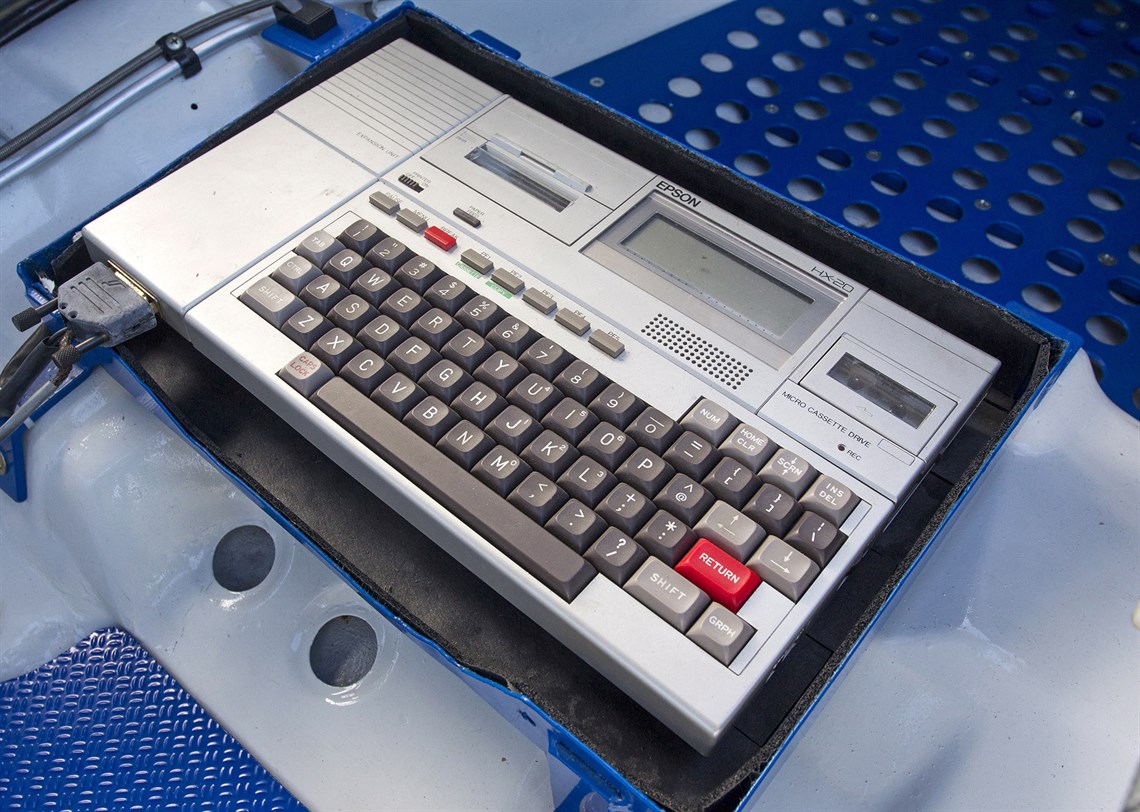 The car being sold by Peggen Motorsport features its original Epson HX-20 datalogging computer with MICRO CASSETTE DRIVE – the very first laptop – how cool is that? The answer is infinity, but it was a rhetorical question anyway. 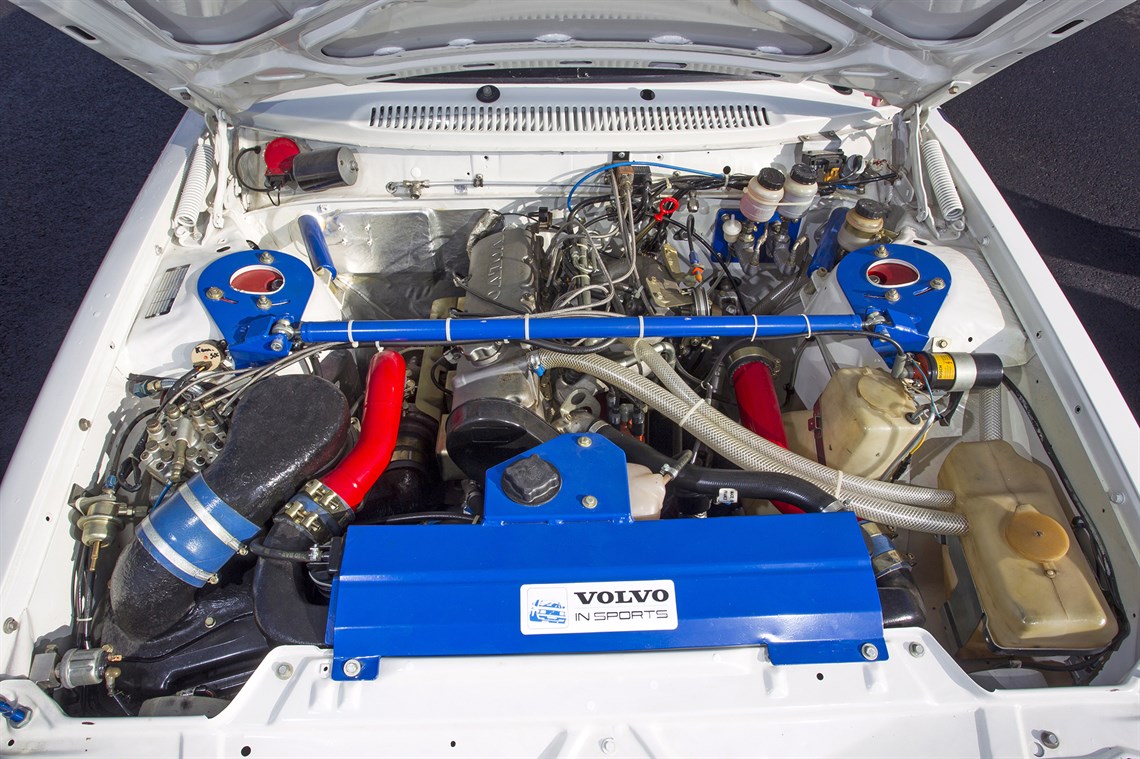 This is the business end. The 2.1L B21ET Redblock shared castings with a common production engine, but all the spinny bits, valves, head ports, and so on were reworked. Bosch K-Jetronic continuous mechanical fuel injection is in place as on a production 240 Turbo, but with upgraded pumps, fuel distributor, intake system, and injectors – of course. The turbo was some manner of Garrett T4 blowing through a front mounted air-to-air intercooler. That big yellowed tank in the front corner of the engine bay, although it was lifted from a 240 wagon windshield washer system, was used for crankcase ventilation, and the one behind it – a 240 Turbo sedan washer bottle – was a reservior for the water injection system, spraying atomized H2O into the intake flow to absorb heat and increase air density, also reducing propensity for detonation, aka knock. That was a big problem on an early ’80s boosted engine and Volvo solved it pretty pragmatically. 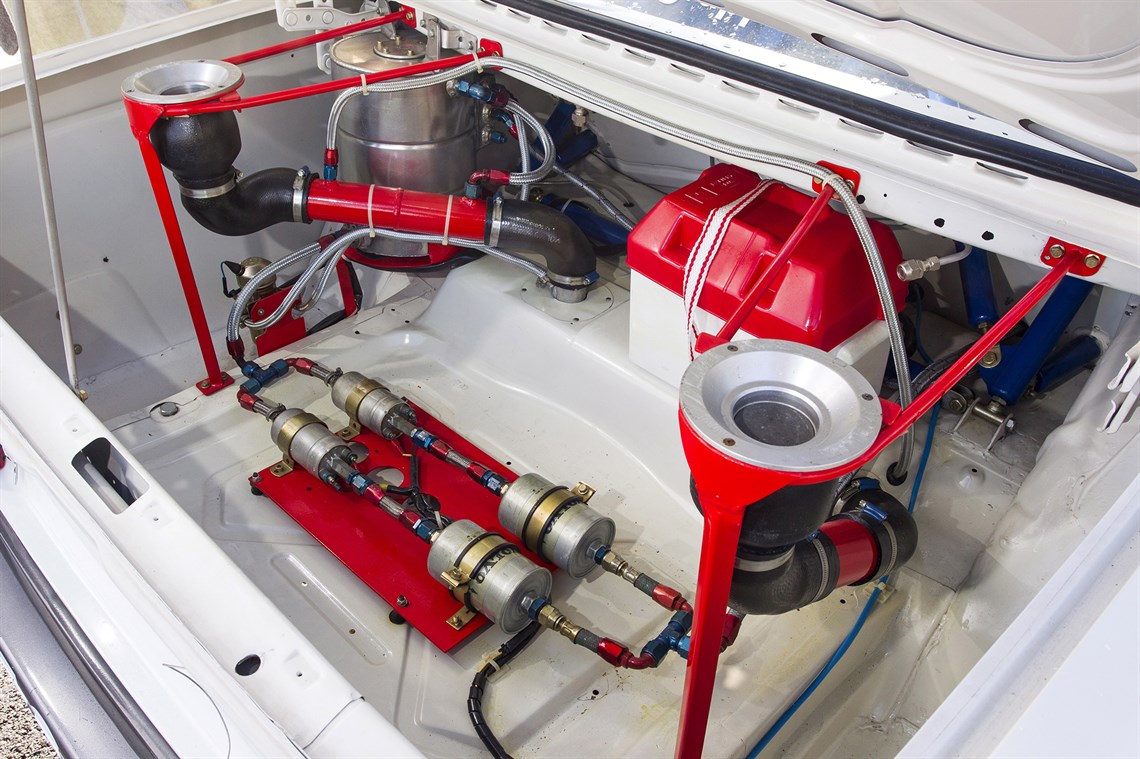 The fuel system is some serious shit. Here you see twin filler necks going down to a fuel cell under the trunk floor in the stock location. Mounted on that red board are two Bosch “044” Motorsport fuel pumps, coupled with twin fuel filters and a massive swirl pot (that canister under the parcel shelf that looks like a mini-keg). 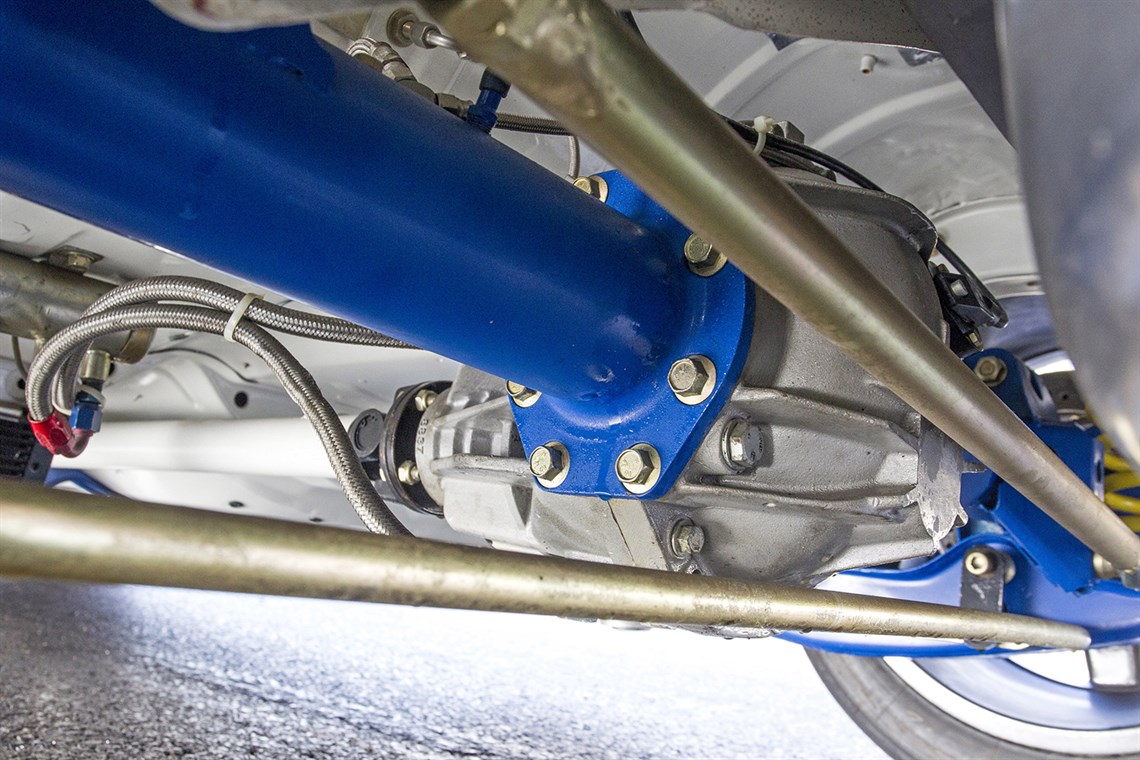 Volvo wasn’t screwing around with the rear suspension under that trunk floor, either. The standard Dana 30 based live axle was replaced with an aluminum center section with bolt-on axle tubes. This reduced unsprung mass, but also allowed the nerds at Volvo to bend those tubes and run barrel-spline axles to allow a few degrees of negative camber at the rear, on a solid axle. Nascar type stuff on a DTM car – pretty sweet. 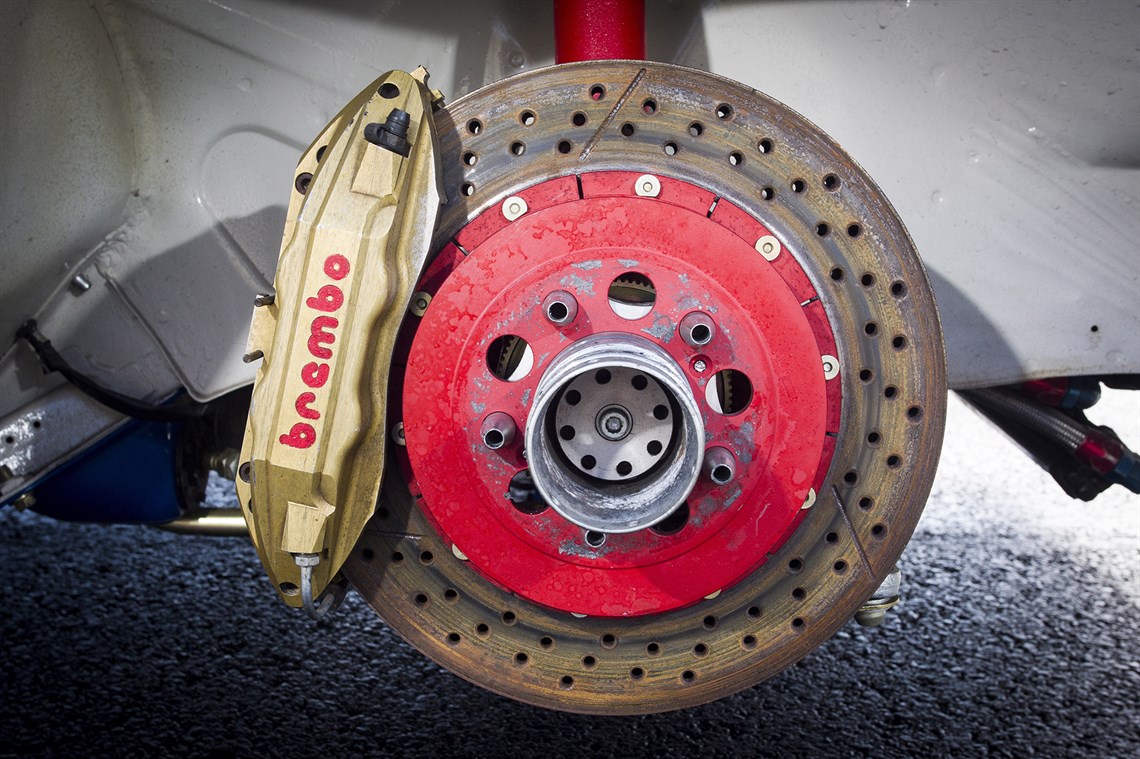 The aforementioned brakes are massive drilled rotors floating on a machined aluminum hub with circumfrential fins, squeezed by a pair of huge Brembo 4-piston calipers. 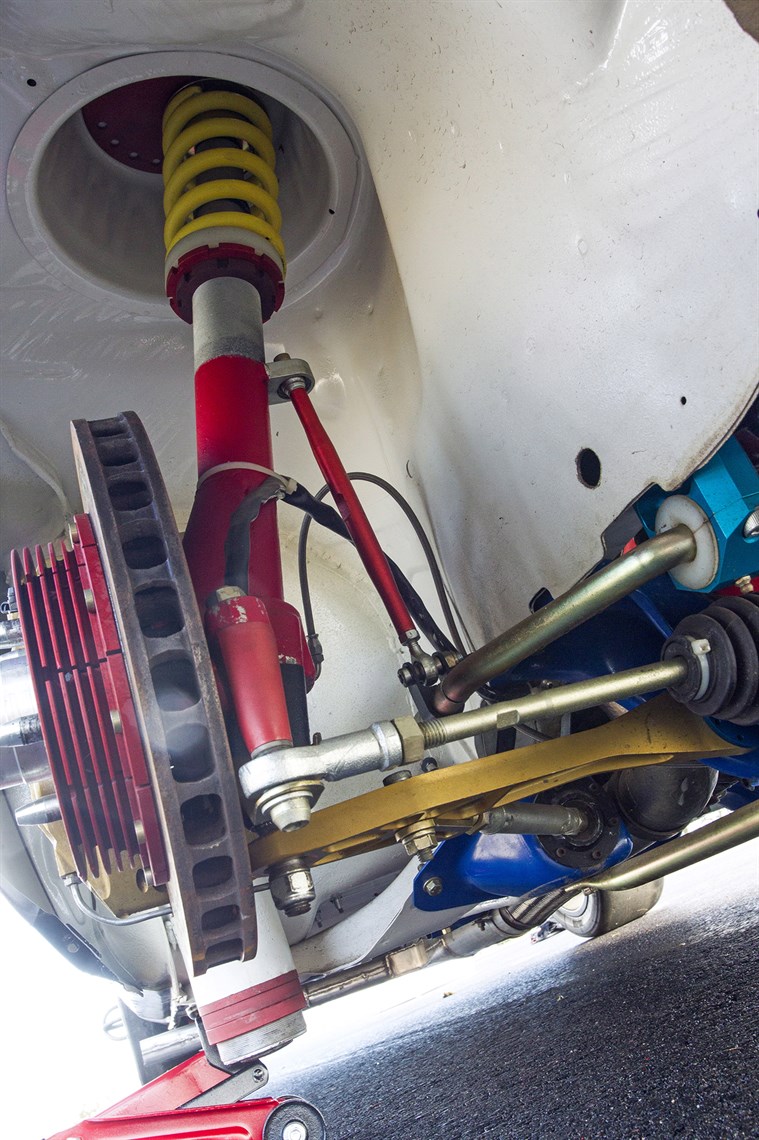 Front suspension may not look special to the casual observer – it retains the stock McPherson strut layout, but that’s about it. The upper shock tower was enlarged massively to accommodate machined aluminum camber plates, which indexed with a series of holes to allow for dialing in the right combination of caster and camber. The front lower arms were fully machined webbed pieces with the rear section being replaced by a heim-jointed rod. The roll center was corrected via spacers under the strut housing and steering arm, allowing for the flat control arm & tie rod angles seen here, at a much lower ride height. The anti-roll bar acted through a much longer than stock endlink attached way up on the coilover strut housing, as opposed to bolting through the lower arm as stock. Anyway….I could go on, but you get the idea!

Description from the seller:

One of its kind!

Its late 1984 and Volvo had finished the first full season with the 242 Turbo Evolution!

They had been competitive in the European Championship and the DTM.

Now it was time to not only win races but championships.

Two teams were contracted to do the job in the ETC. Magnum Racing in Stockholm, with one car, and Swiss team Eggenberger Motorsport with to cars.

There was late that season built a forth car by Volvo Motorsport and this was used by Magnum Racing in Estoril in ETC 86.

Today only two cars remains of the four that was built for the 85/86 ETC seasons. The Magnum Racing car is now in the Volvo Museum in Gothenburg and this car, built by Volvo Motorsport, is the only other.

This car is now for sale.

It comes on Speedline cast magnesium wheels and have Traction Control System. It even has the EPSON laptop that was used as a datalogger by the time! It has the original Rubi aluminium roll cage.

Daily Turismo Omologato (DTO) features showcase cars that are above the standard DT price range, but are unique and worthy of your attention.

See a better touring car? Impossible! But send your other tips here: tips@dailyturismo.com

CFlo wants to drift his 242 around a track now, whilst finishing 3rd only to a Rover SD1 and a BMW 6-series.