The original Austin Mini is one of those motoring icons that is instantly
recognizable anywhere and is known for its compact package, large usable
space and cat-like reflexes.  It is one of those hip cars that makes the
driver cool no matter if he is Jason Bourne or Mr Bean.  It is cool.  But, if I learned one thing from high school, it is that the real trick of being cool is avoiding the appearance of trying to be cool — the cool must naturally ooze from your pores.  Like the bespectacled nerd who aces all of his classes even though he doesn’t study — he becomes cool because he appears effortless in his success.  Now, what happens when you take that genius nerd, cover him in a leather jacket, ray bans, prison tats, teach him to throw 60 yard touchdown passes and grow a viking sized beard?  Quite simply, you’ve got the recipe for a young Chuck Norris, or this 1975 Austin Mini ZCars Rear Engine Conversion 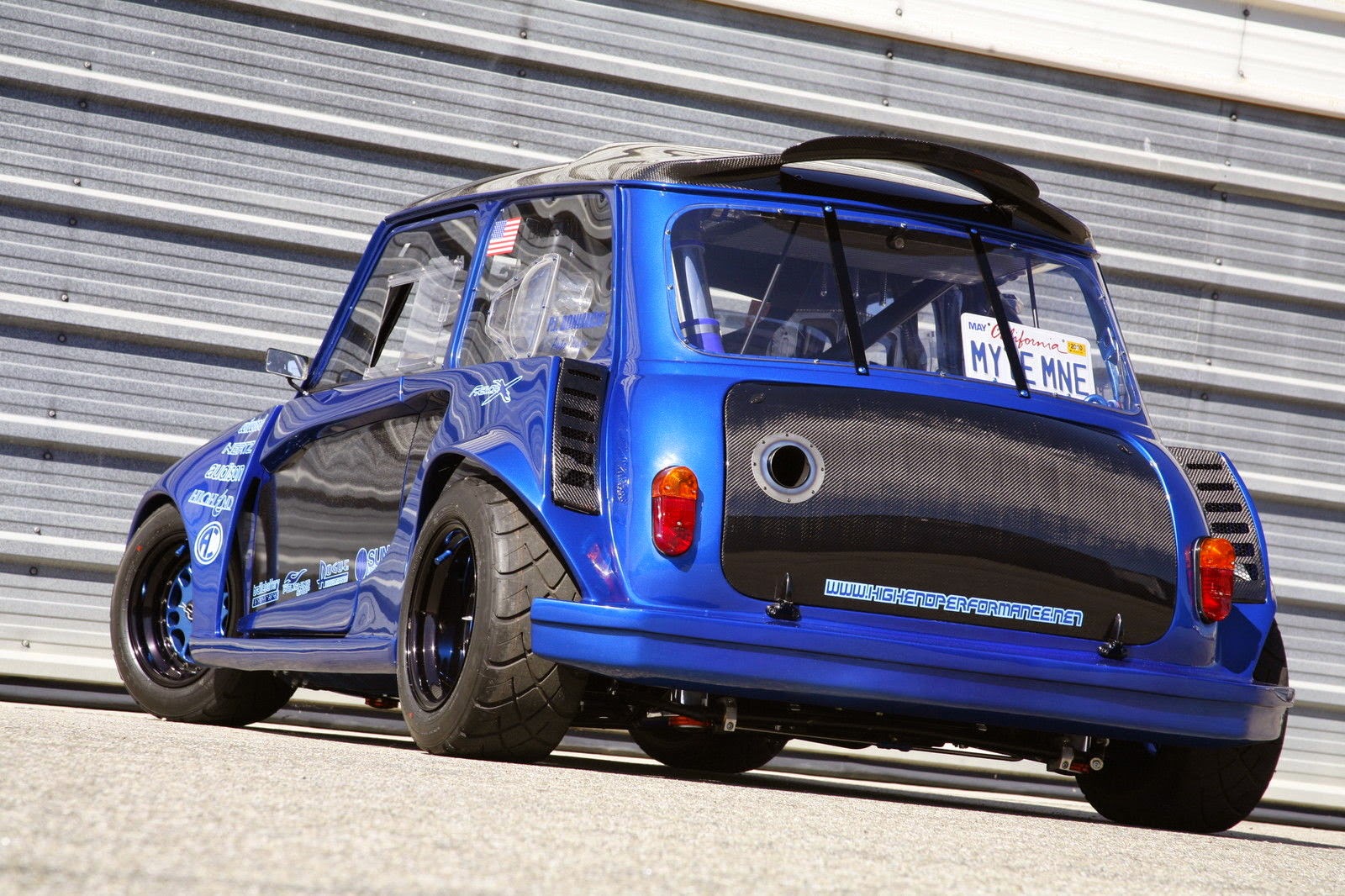 Folks who know me, ask me how I come up with ideas for the stories about the cars. Sometimes, it is hard, I’ve got to find a hook, something unique about the car that can be translated into an amusing story — and other times, the car writes the story.  This is one of the latter. This car is a 10 lb bag of whoopass stuffed into a 12 oz pickle jar.  I could have monkeys pounding on keyboards and you still scroll down because the pictures are captivating. 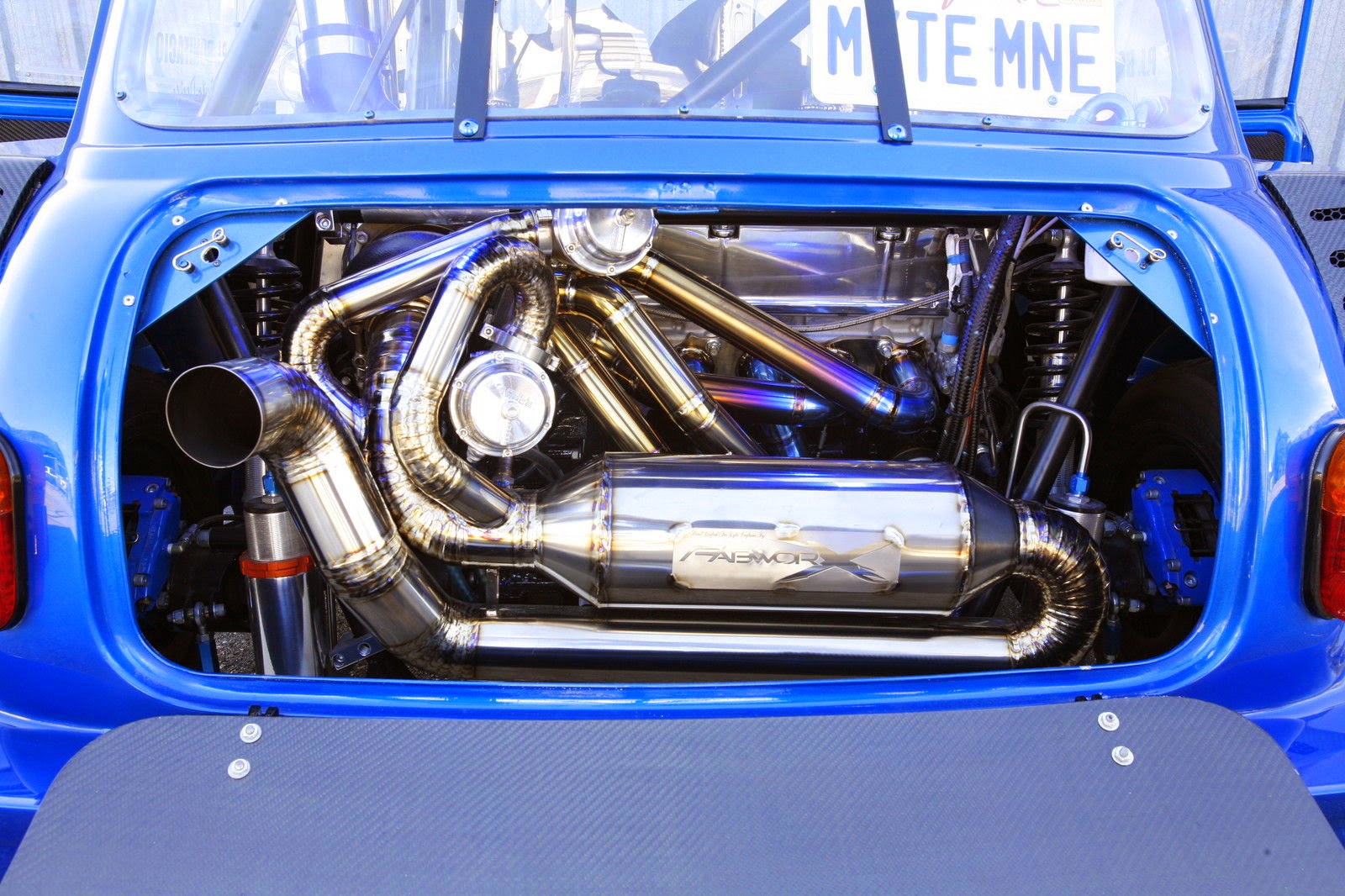 I know what you are thinking.  A 495 horsepower Mini, it’ll be a front wheel peeling machine with a huge rear anti-roll bar to help it lift its rear wheel like a dog trying to piss on a fire hydrant…but just like that time you said buying a ’78 Saab for a daily driver, bad idea, you are wrong.  Dead wrong.  The engine, it ain’t in the front.  Its in the back, where your kids shouldn’t be, and it should be. 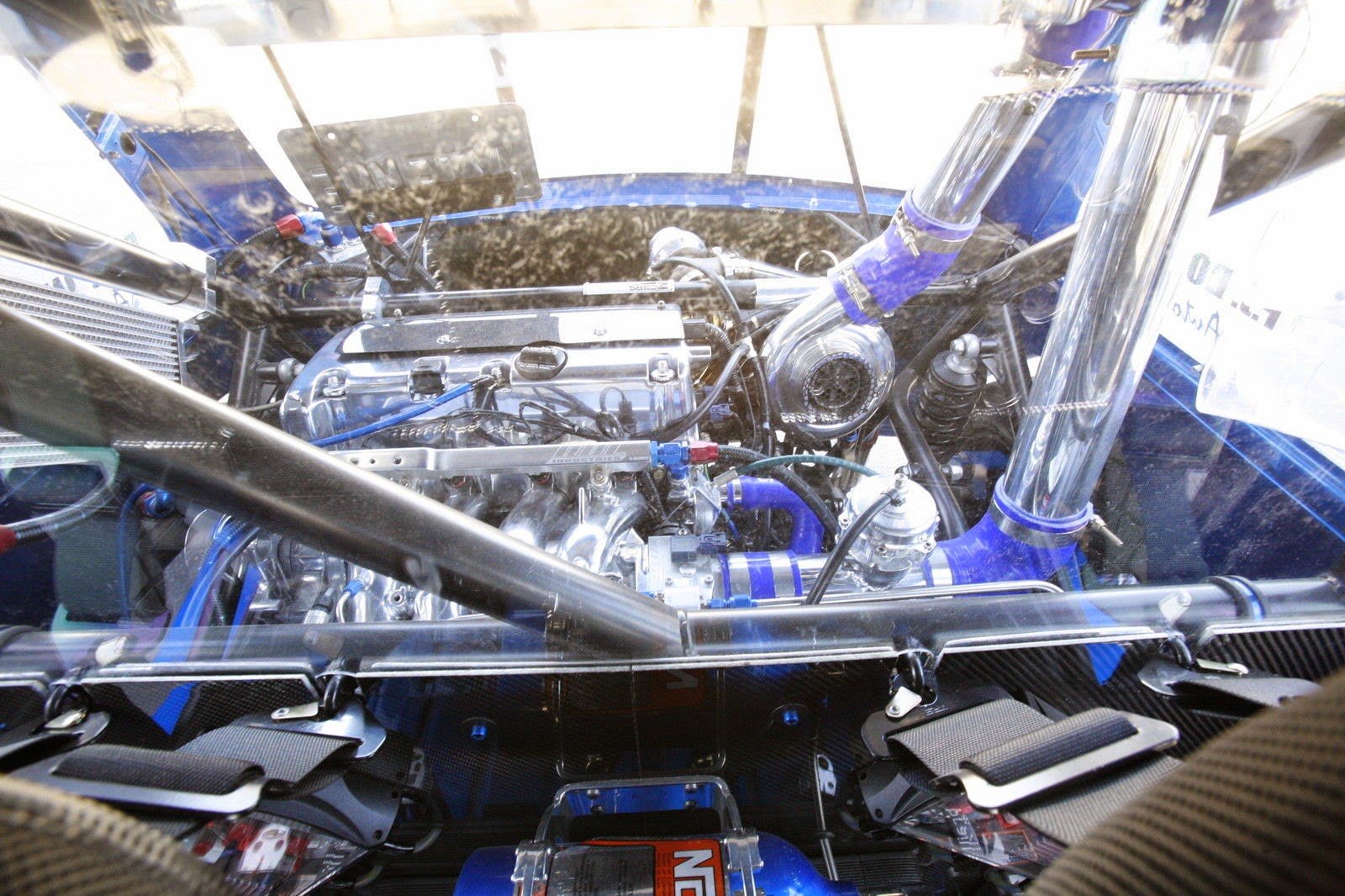 The builder was even kind enough to build some kind of insulating firewall with lexan window so your pony tail doesn’t get sucked into the compressor of that giant air cleaner free turbocharger.  I’d have left it open and put a big sticker on the sun visor that says “get a haircut hippie” but I’m a jerk like that. The builder of this thing, on the other hand, is a class act.  You are looking at a Honda 2.0 liter K20Z1 inline-4 from a 2005 Acura RSX Type-S that has been turbocharged and tuned to 495 horsepower mated to a 6-speed manual gearbox that is mounted to the rear wheels. 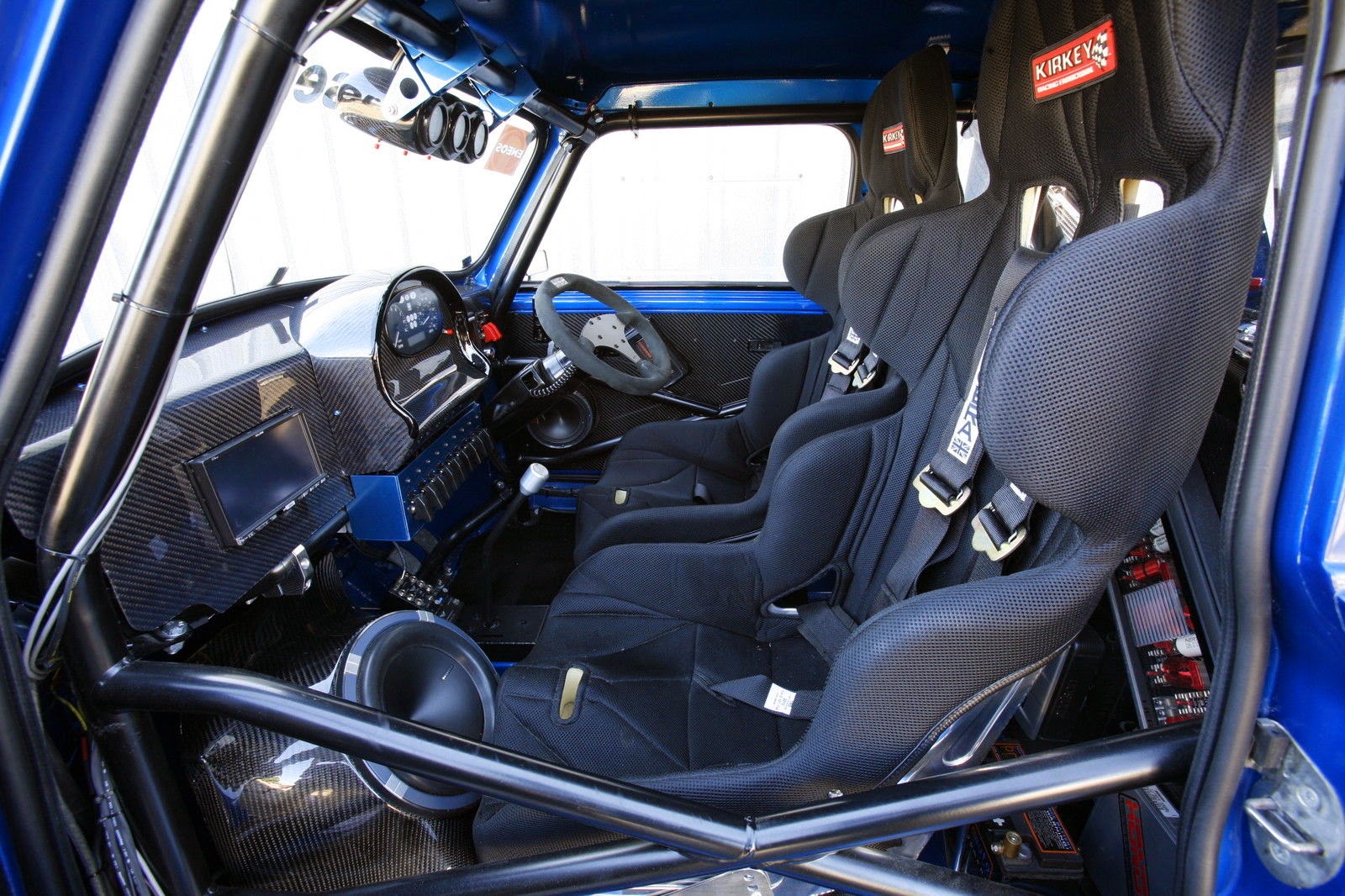 The interior is fully customized and you can quickly add up the retail dollars spent on this car and the seller’s assertion that $100k was spent on the car can’t be far from the truth.  Everything has been modified in this car from A to Z and a sweet set of build pics can be found on the builder’s website audioprofiles.com. 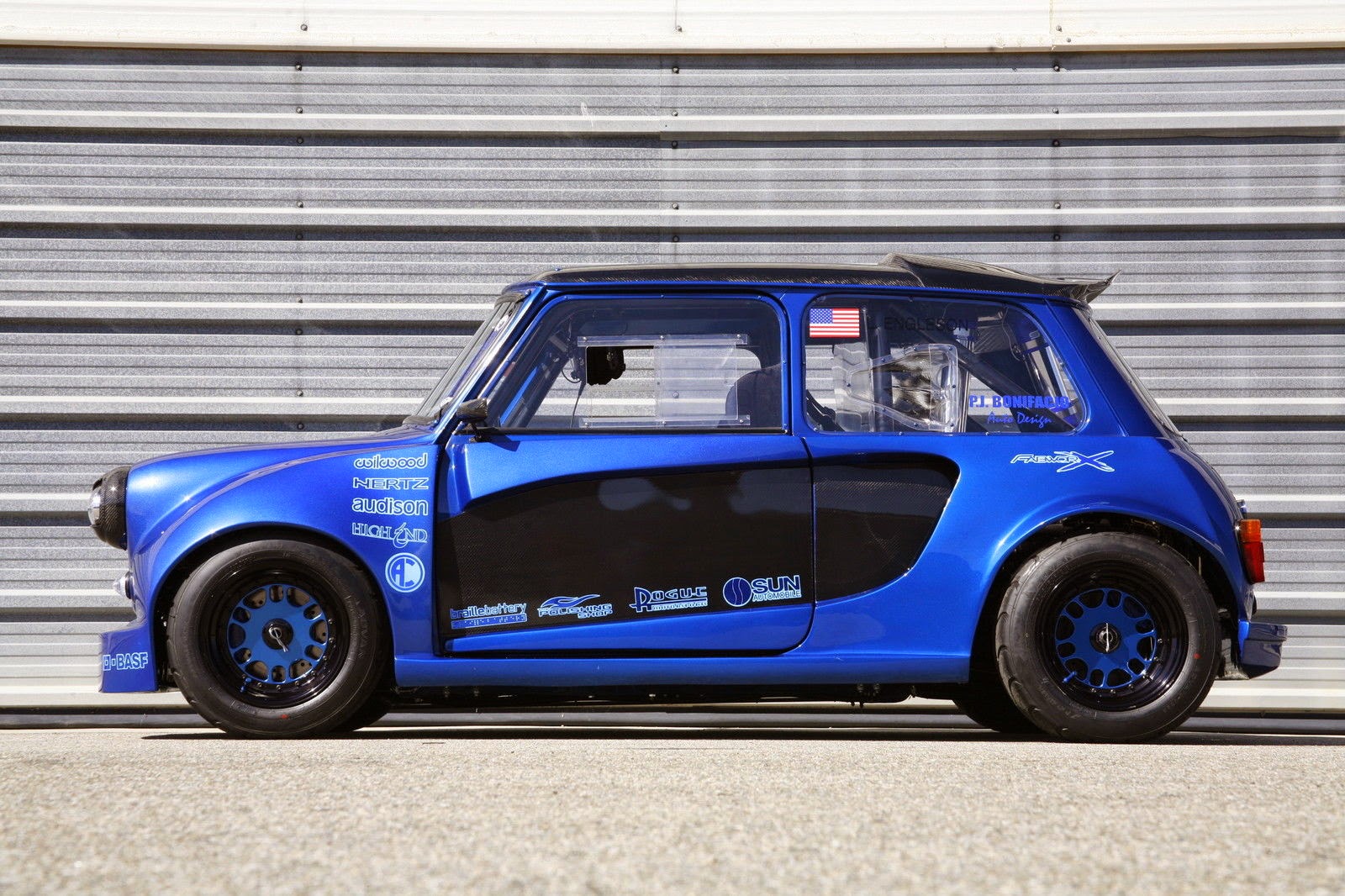 See a better way to pickup somebody else’s tuner car for a fraction of the build cost?  tips@dailyturismo.com