One of the great things about buying a fully depreciated 20 year old performance car is that it’s really not as expensive to maintain & repair as all the naysayers will have you believe…IF you do the majority of the work yourself. I’ve found that a casual enthusiast mechanic can fix just about anything with a good set of hand tools and a stubborn yet patient attitude. Yes – even on a hand-built BMW M car. For this update on my E34 M5, the umpteen-way power seats get some much needed attention. This is the next chapter in the DTM5 story, and part of Daily Turismo’s Project Car series. 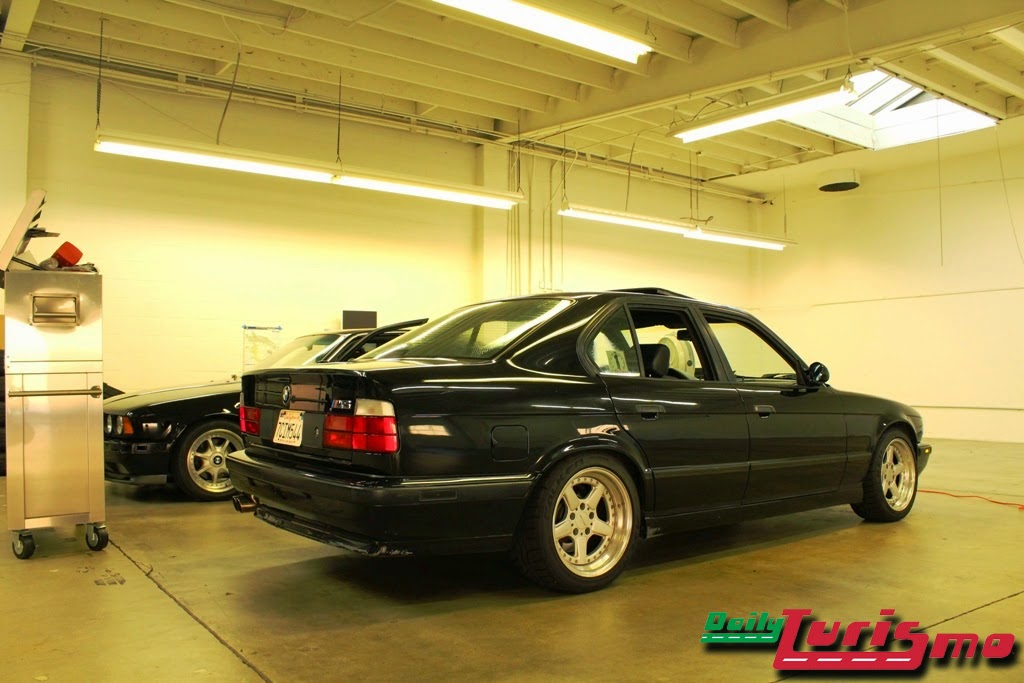 Keep the credit card firmly planted in a closed wallet, make friends who have the same car, do your interweb research, join a club, or whatever it takes to learn how to fix the small stuff yourself. You can leave big jobs like boring cylinders or decking heads to people with the proper machines, but focus on the small stuff that is time-intensive and therefore costs a fortune to pay a mechanic to fix. 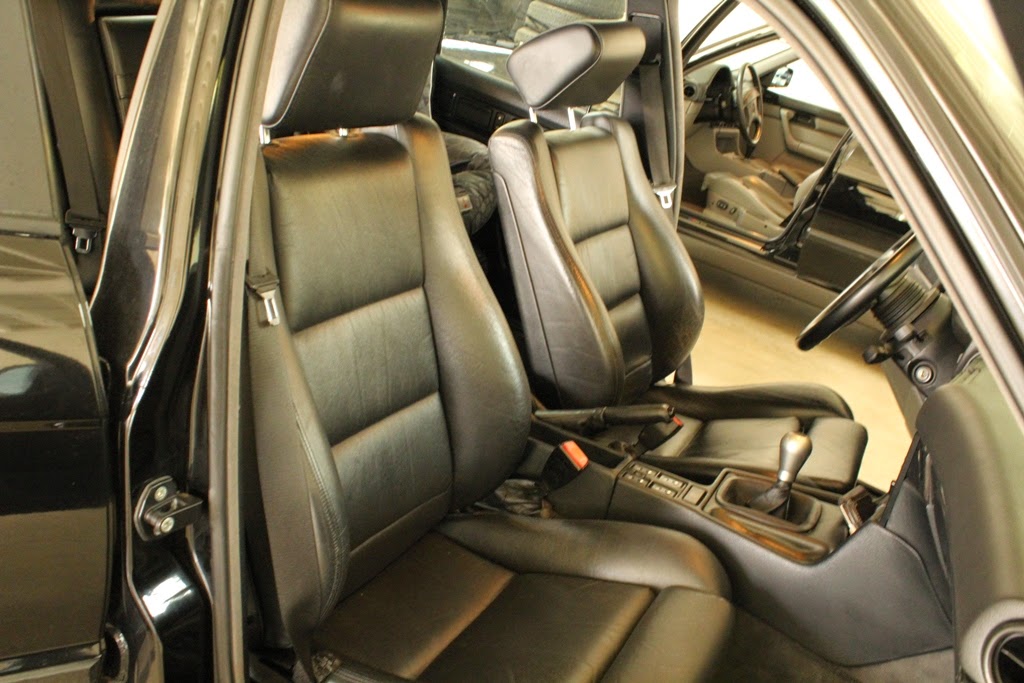 The DTM5’s power “sport” seats were fine when I bought the car last year, or so I thought. Everything seemed to work. But sometime this summer the driver’s seat back decided to start wearing a do-rag and gold chains, popping and locking into a certified gangsta lean. It was hard to capture in photos but I think you can see in the shot below that the right side of the seat is lagging far behind the left side. Actually the left side could still be articulated, meaning that at the touch of a button I could go from evenly reclined to dialing in a precise amount of zero-effort lean; rollin’ hard in my 3.5 yo. 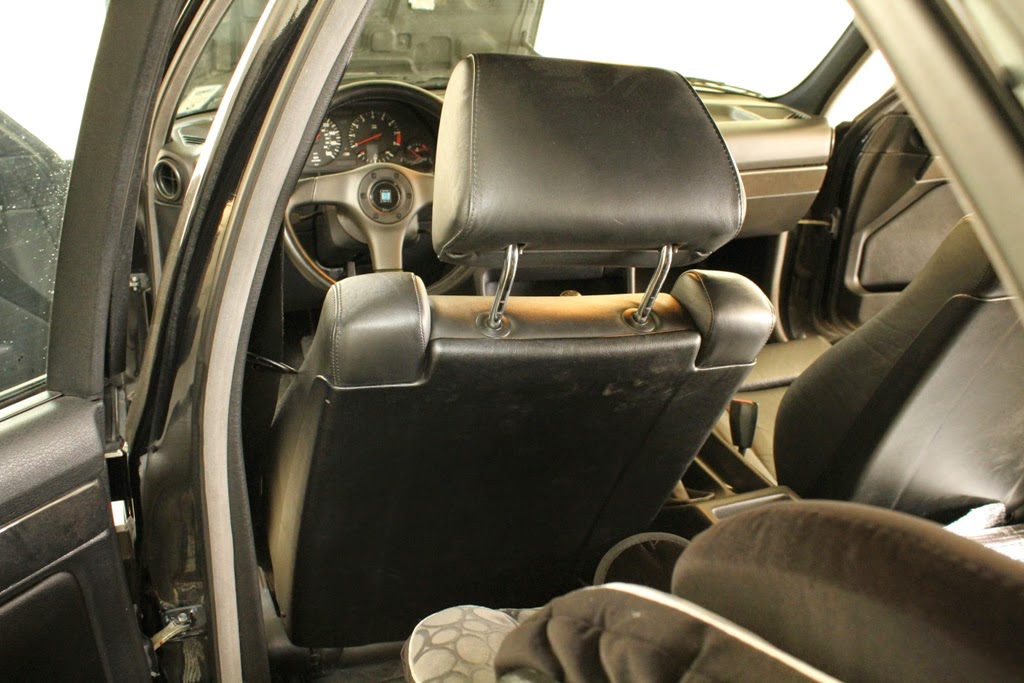 I figured there were two motors – one for each side of the seat back – that controlled the recline mechanism. Last week I started to get more and more frustrated with the failure…I could get the seat to be even but only at an extreme angle, which made me look more like a Civic enthusiast peering out the rear side window and struggling to reach the steering wheel. With the help of a friend who offered up a nice indoor workspace and his assistance, I ripped the seat out and started diagnosis. 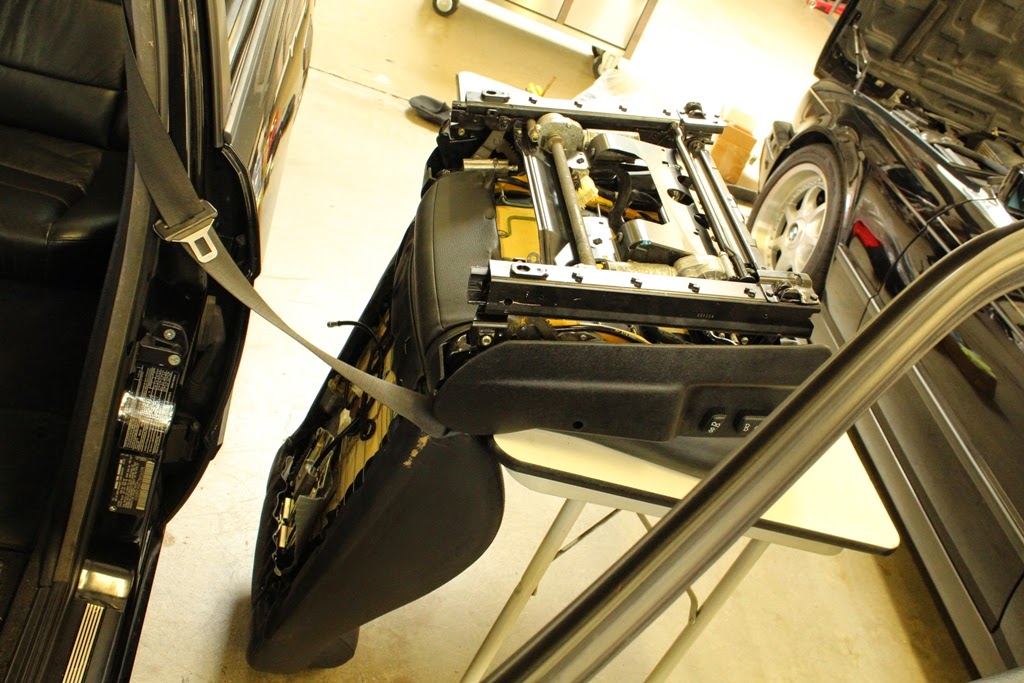 Actually the seat sliders are held in at the rear with two “E14” screws, meaning you need an external Torx style socket to remove them. If you’re not familiar with these, they almost look like 12-point sockets except they only have 6 points. After a quick trip to the nearest O’PepZone we were able to remove the screws from the rear and tip the seat forward to release the sliders. Plopping it upside-down on a table adjacent to the car was most expedient, since the seatbelt anchor is buried deep within the seat somewhere and I didn’t want to waste my time removing it. 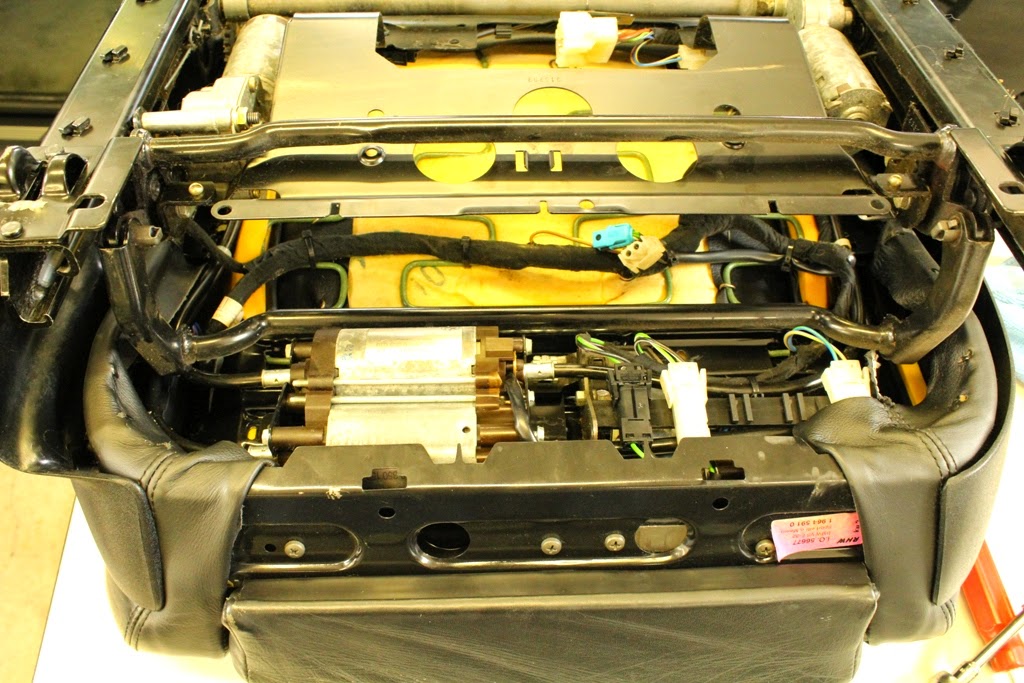 First thing I noticed when examining the underside of the seat: there are two tandem motors right up front under the thigh bolster. So not exactly what I imagined – and it turns out there are 6 motors total in each front seat. Depending on their function, each motor has either one or two cables sprouting from each end that snake their way back to the rear of the seat. 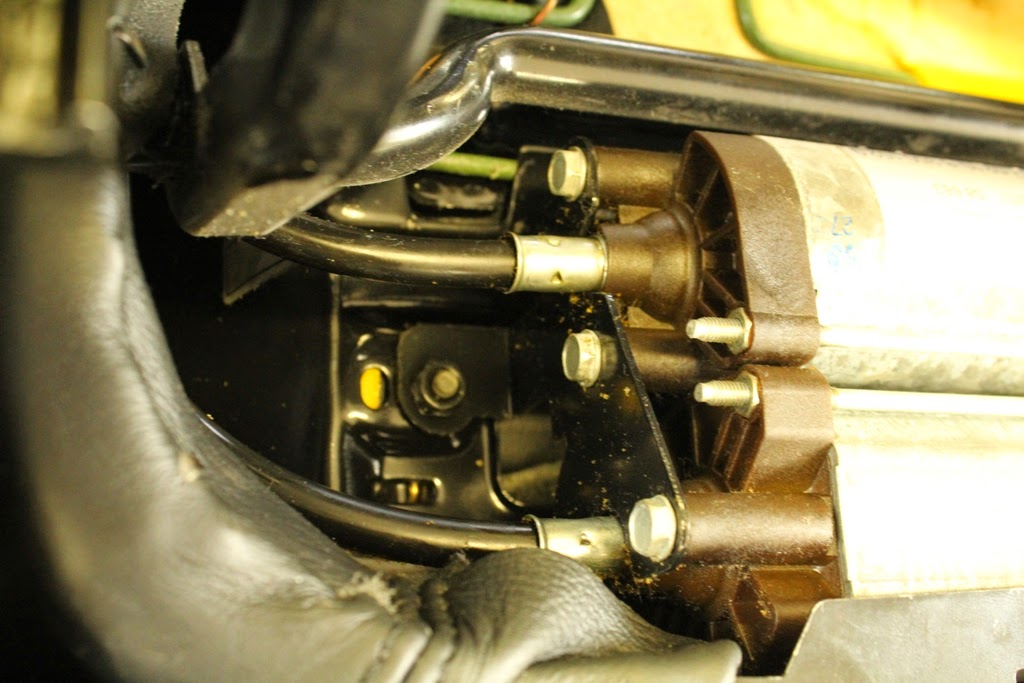 These are rotary cables like you’d see on an old mechanical speedometer drive, sprouting from the side of your transmission and running up to the back of the instrument binnacle. They have ferrules crimped to the ends and are retained in the seat by the motor bracket which captures a step on the OD and holds the ferrule into its respective socket in the motor. 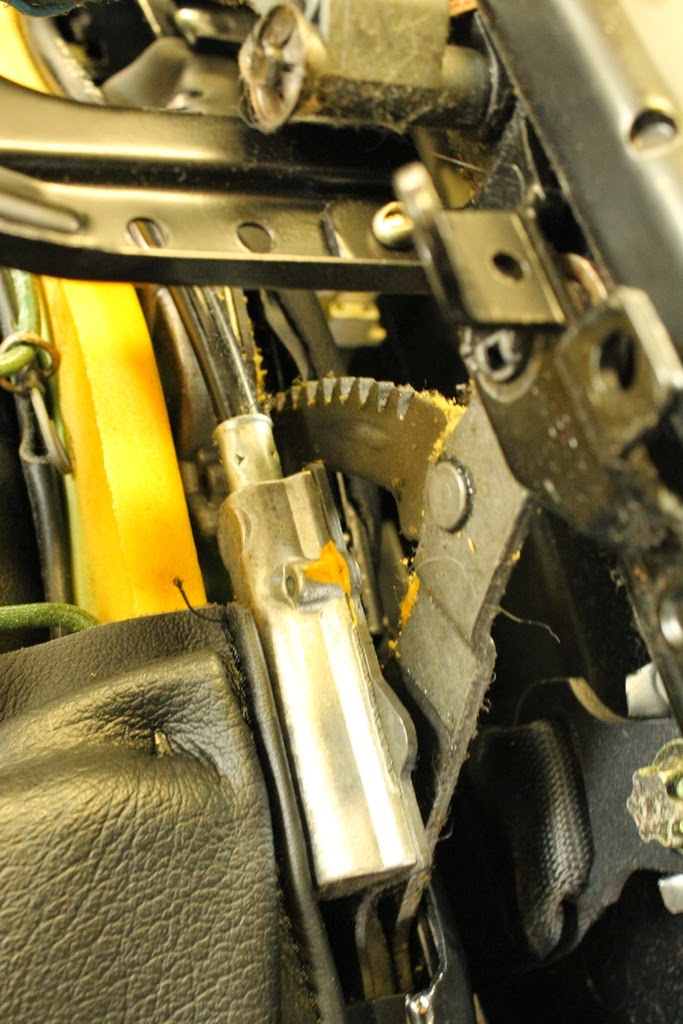 Following one of the cables back it plugs into this gearbox which actuates the rear up/down mechanism for the seat bottom section. This is mirrored on the other side, and one motor controls both gearboxes by virtue of the fact that the two cables are plugged into either side of the same motor. The seat back lean angle is controlled by the rearmost motor of the pair, and its cables end up buried deep in a section that was impossible to photograph, so I’m just using the up/down gearbox as an example. 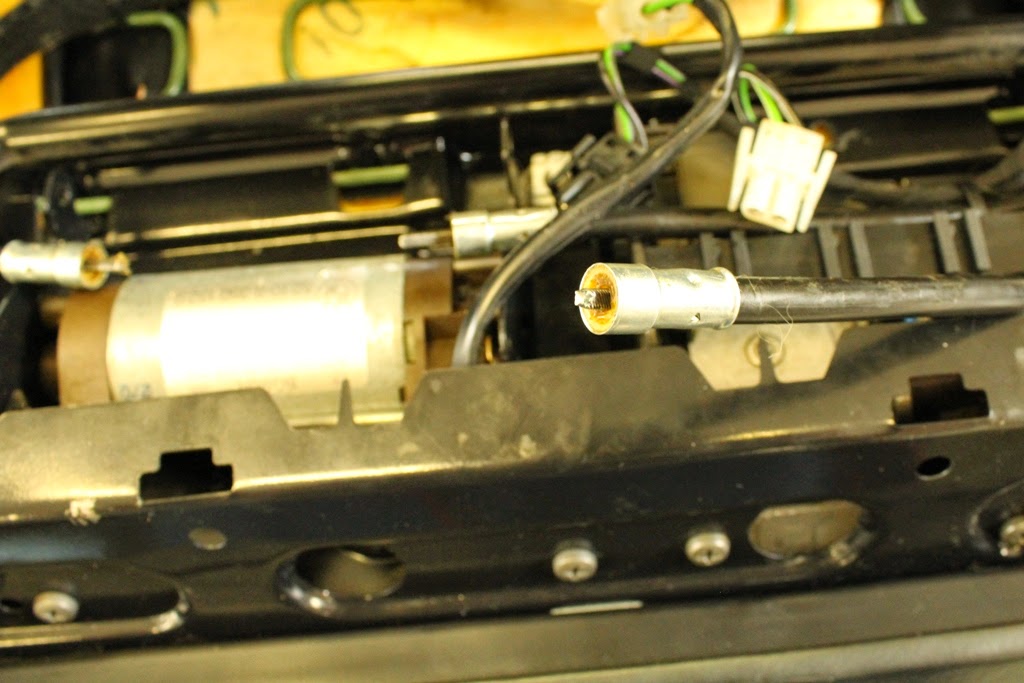 This is what the cable looks like when pulled out of the motor – a square section of flexible steel inside the plastic sheathing. The metal ferrule on the end was crimped on at the seat factory. There’s a white plastic bushing and some grease in the end of the ferrule, and the protruding cable is supposed to engage the drive socket in the motor to make your seat do its thing. The problem is (and this is apparently a very common BMW issue across many models & generations) that the plastic sheathing expands over time. The steel cable stays the same length of course, so what ends up happening is a gradual retraction of the cable until it unplugs from the drive motor. 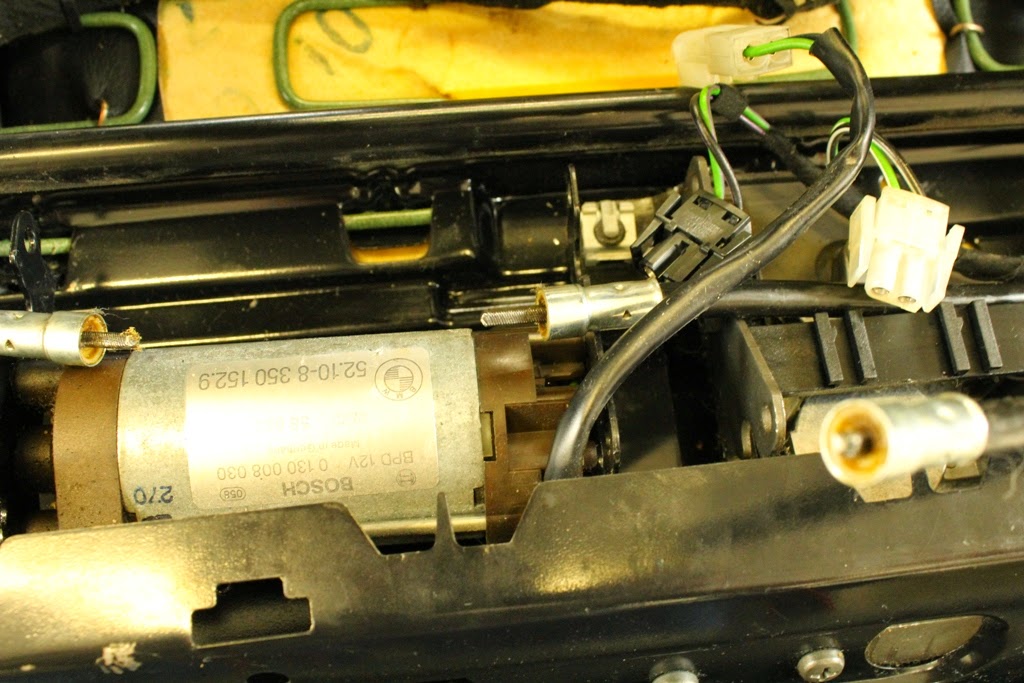 Compare the amount of cable protruding from the ferrules near the motor above to the prior pic, and you’ll see how much of a difference the expanded sheathing has caused. The fix? It involves fire and scissors. 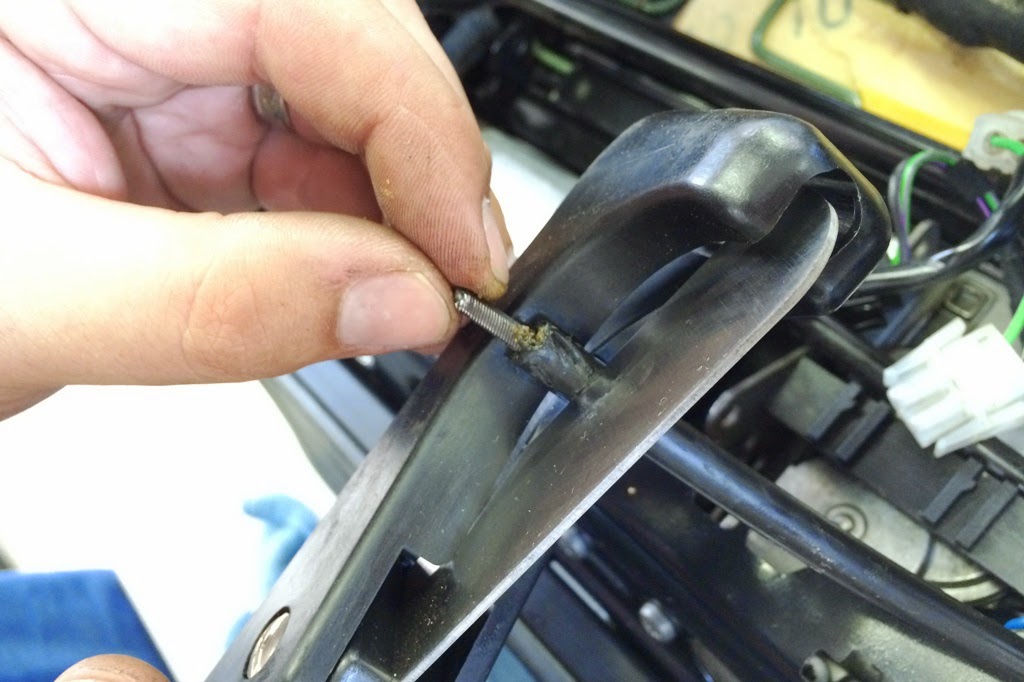 Some careful heating of the ferrule is needed to soften up the plastic sheathing crimped underneath. We used a MAPP gas torch initially but that was like using a solid rocket booster to make S’mores, so a regular BBQ lighter became the tool of choice. While the heat is on, grabbing the ferrule and sheathing with separate pairs of pliers and applying some steady tension makes the ferrule just spooge right off, once the sheathing is soft enough. To shorten the sheathing, just trim “an amount” off of the end with scissors or a nifty hose cutter like the one above. Seriously – these hose cutters are awesome for cutting anything vaguely cylindrical and rubbery – they give you a nice clean edged, square cut vs. the jagged mess that invariably happens when using a utility knife or razor blade. 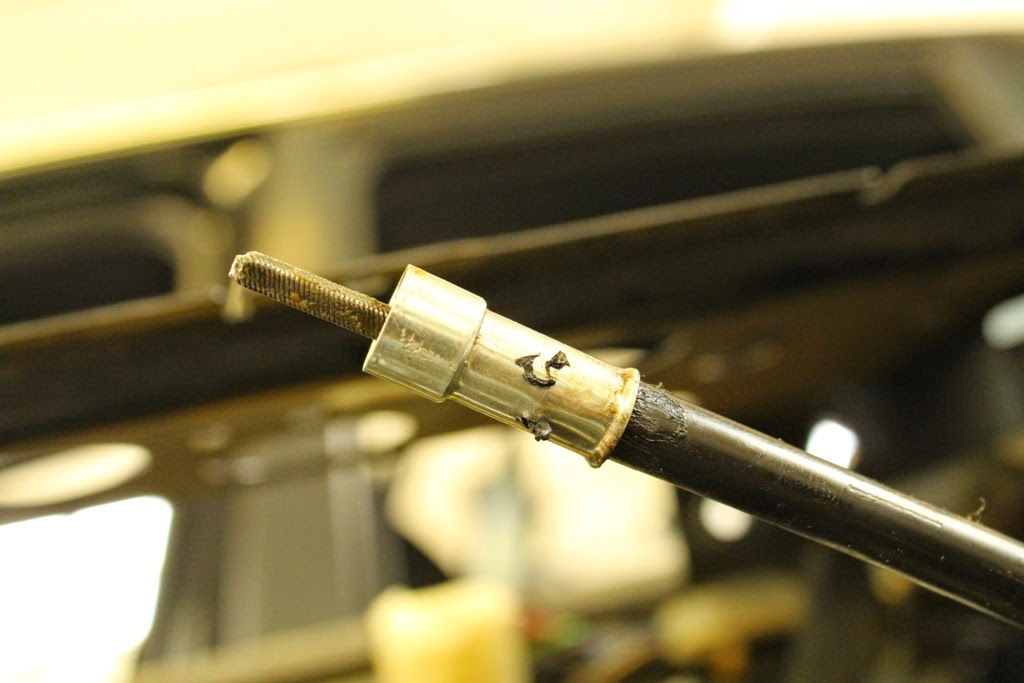 To reassemble, heat up the ferrule (off of the cable) until the grease just starts smoking and popping, then push it back onto the cable with pliers and you have the finished product, above. The hot metal melts the sheathing enough to key it back into the original crimped divots, and now the cable sticks out enough to stay engaged in the motor. Hooray – just remember to remove that plastic bushing first before breaking out the lighters or heavy torches. 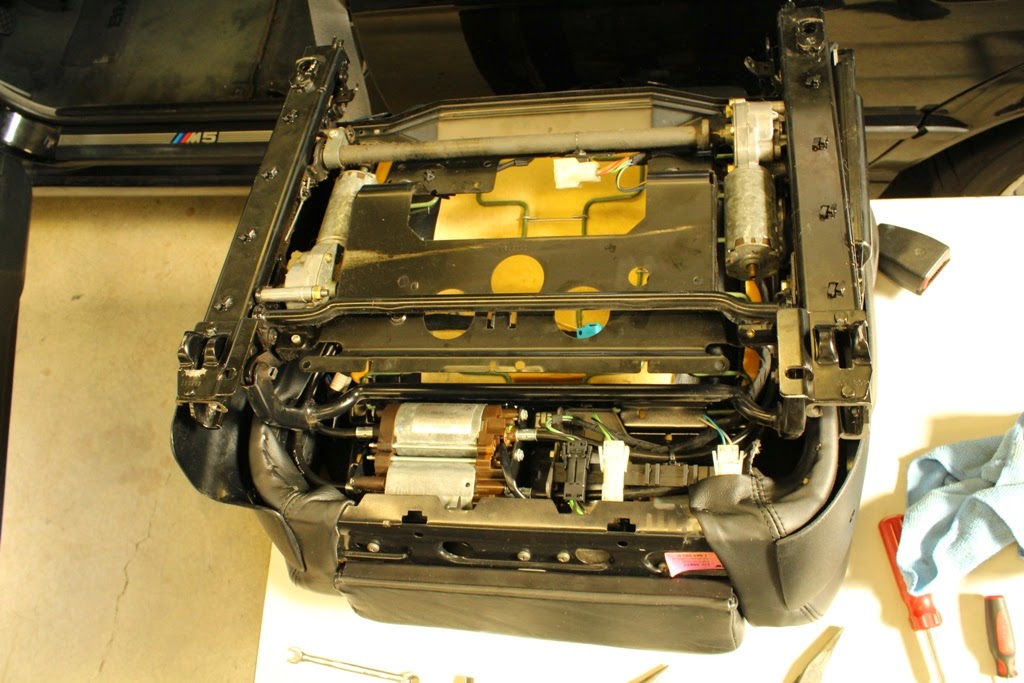 One final step: adjusting the seatback side to side to get it straight. I actually did this about 6 times before I was satisfied, test fitting the seat, sitting in it, squidging around, measuring each side’s distance to the steering wheel, ad nauseum. And I’m still not satisfied that it’s exactly square, but close enough for DT work. It was surprising how little torque was needed to actuate these mechanisms – turning the bare steel cable by fingertip was enough to make the fine adjustments.

These seats do go back together fairly quickly if you have small enough wrenches to zip the 8mm screws back into the motor brackets. I highly recommend slim ratcheting box wrenches as there’s no good way to fit a socket in there on most of the bolts. 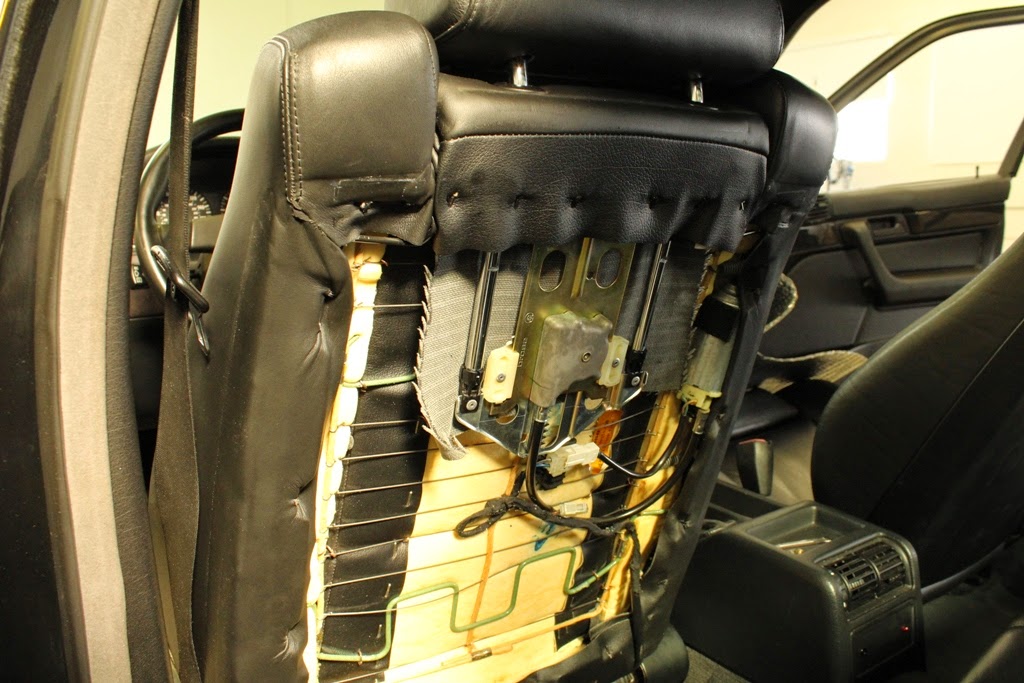 While the tools were still out and the dinner bell hadn’t yet rung, I went ahead and fixed the power headrest up/down mechanism that I didn’t even know this car was equipped with until that very day. Turns out the same button that controls the back angle also adjusts the headrests when pushed up or down instead of leaned fore or aft. The molded fiber seat back comes off after removing two screws near the bottom and sliding it up off of some springy clips. 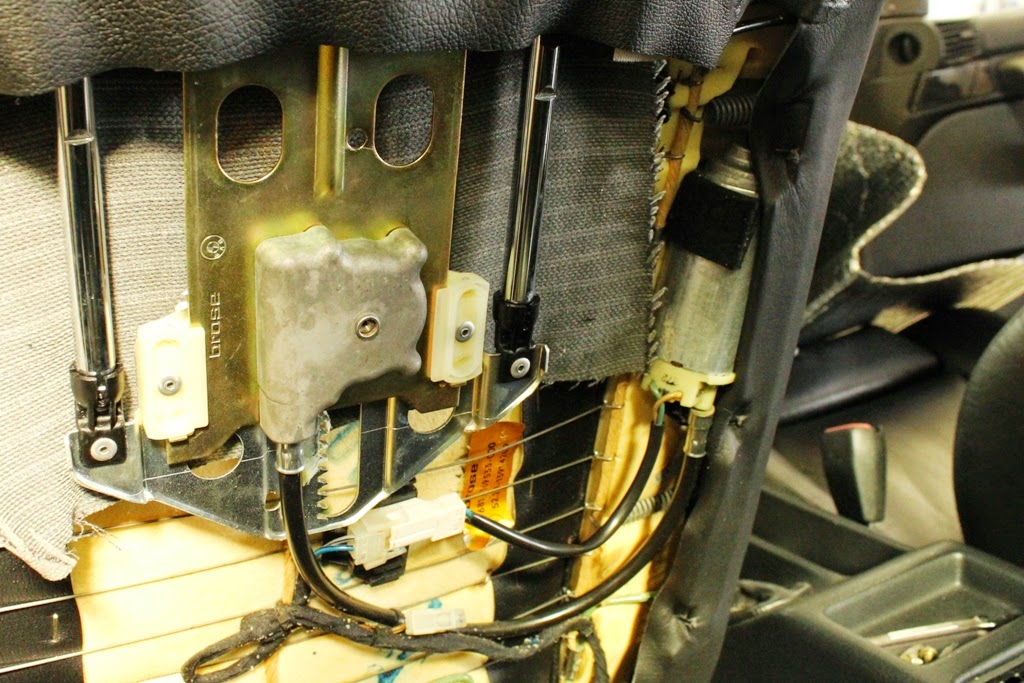 Here’s the same basic mechanism from the seat base, except only one cable and one motor this time. The motor hides over on the right in between the seat cushion and the side panel. It’s held in by two of the hardest to access 8mm head bolts that I’ve ever encountered, but some finagling with sockets and extensions and the motor was free. You can see how the cable heads down from the motor and then turns back up in a U shape to the headrest gearbox (probably a worm drive) which engages a rack gear that’s stamped into that big bracket retaining both of the headrest posts. The sheath was hellaexpanded on this one; almost no cable left protruding. 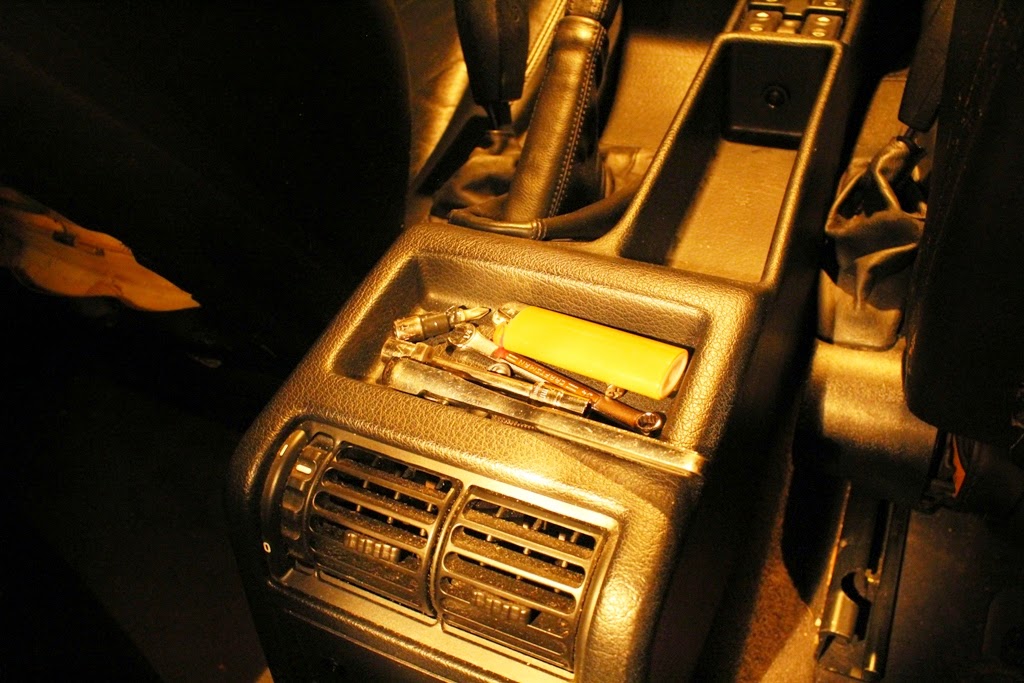 Luckily Ferdinand BMW decided to include a handy tool tray between the seats of the E34 when he designed the car, which gives you a nice place to set your miniature wrenches and lighter for this job. The same basic “heat, separate, cut, heat, smooge back together” process was repeated for both driver and passenger side headrest mechanisms. 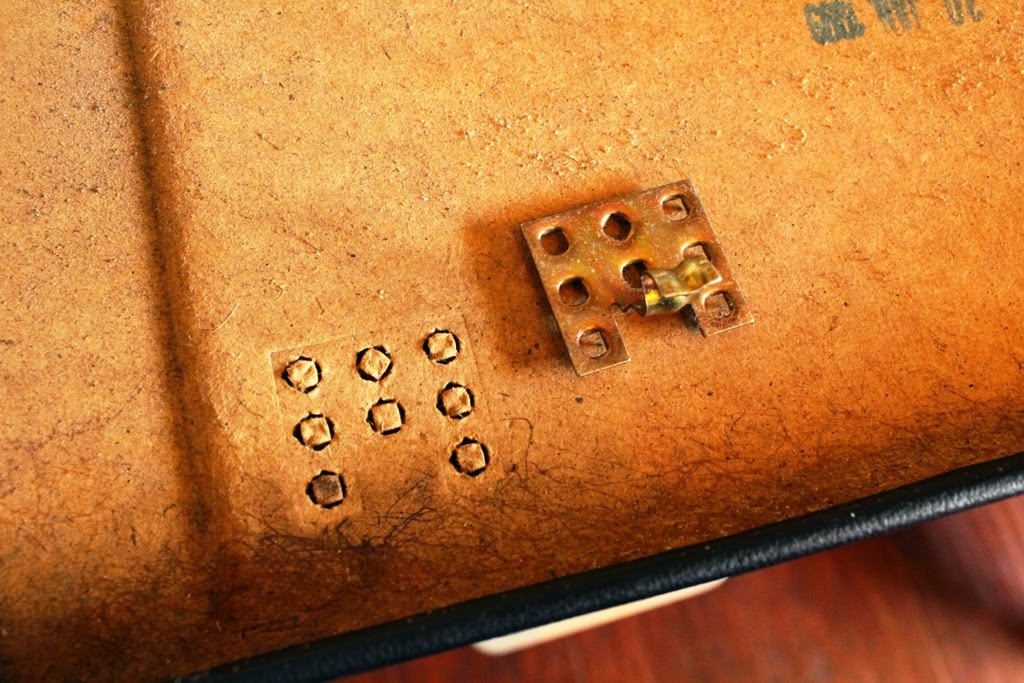 However, I goofed up and knocked off some of the little sheetmetal clips that locate the molded seatback covers in the process of removal… 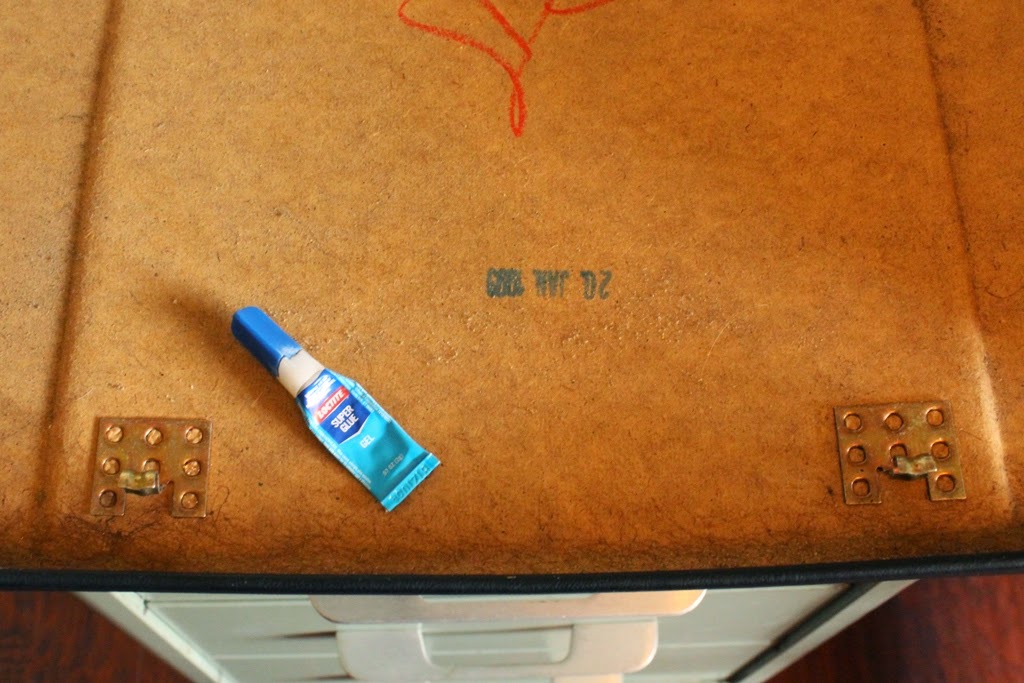 So I applied some ethyl-2-cyanoacrylate (super glue to non-dweebs) and light bops and they are back in place. The seat back covers are stupid simple but aggravating to reinstall because the clips aren’t easy to engage in the seat back, and the inner screws are right up against the center console. Luckily every replaceable screwdriver bit has a 1/4″ hex drive, so we just held the bit by hand and used a 1/4″ open end wrench instead of a driver. 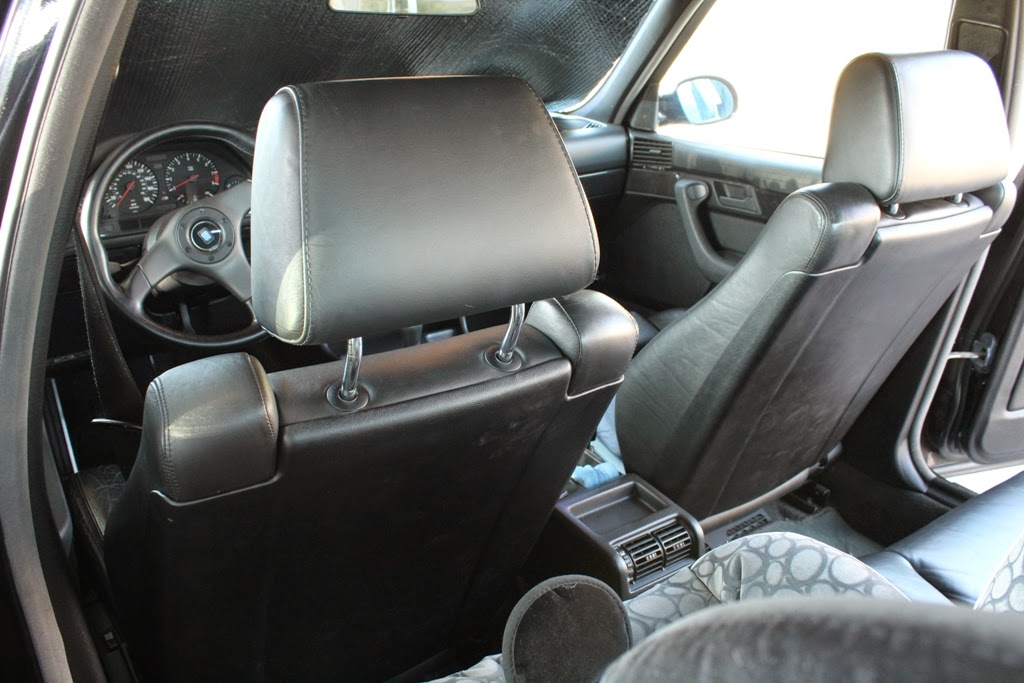 All back together – and holy carp, nothing looks fishy anymore! The seats are square to each other, all of the buttons actually cause movement in response to being pressed, and I’m a happy old BMW owner. 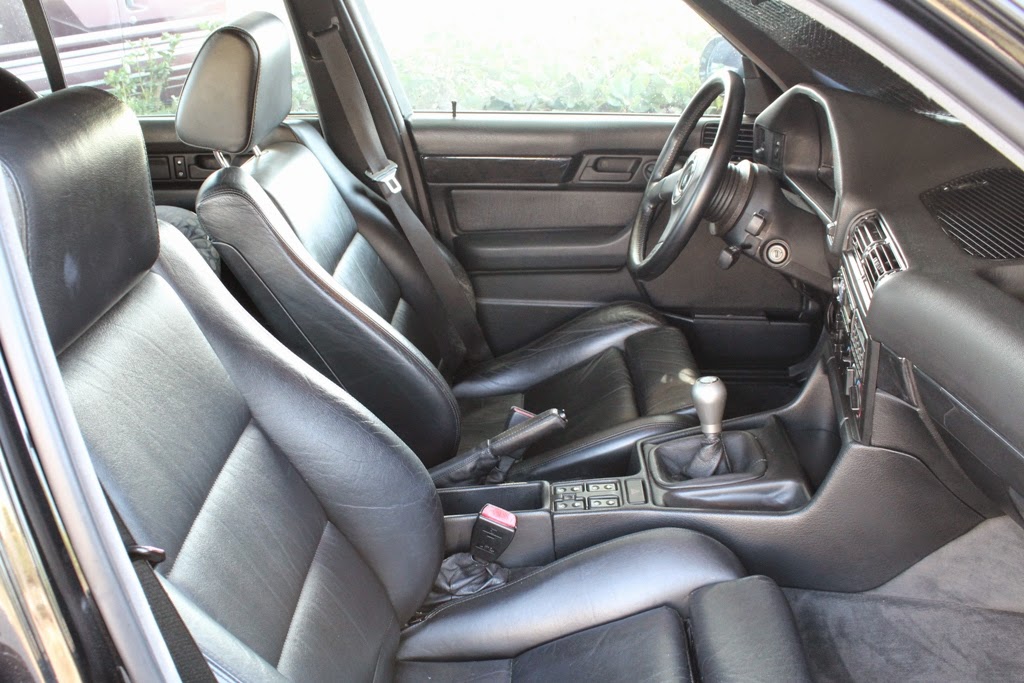 I may not be rolling quite as hard and/or deep with upright seats, but I don’t walk with a limp or have a gold grille in my mouth so I’m happy to drive around sans lean. And even though this may seem like a minor job it’s all the little improvements that you make to an older car that can transform the driving experience from meh to awesome over time. Total cost for repairs = $0, plus a day of futzing around. The DT project car accountants are happy. Hmm…now what can I break next?