DTM5: It Needed Tires. It Got Tires.

Tires! They are the most important car parts. The only connection between the metal bits and the road. Without good tires, it doesn’t matter what the chassis and powertrain can do because we don’t all drive SoroSuub X-34 Landspeeders…or Light Cycles…yet. The DTM5 came to me with “temporary” tires that were old, hard, crusty, and bumpy. Fun fact: the Chinese “SUNNY” brand front rubbers were on DT Editor-in-Chief Vince’s Subaru STi when he nabbed it a few years ago and immediately replaced them with something from Falken. Aside from the great attributes of being free and holding air, the old tires had no value whatsoever. 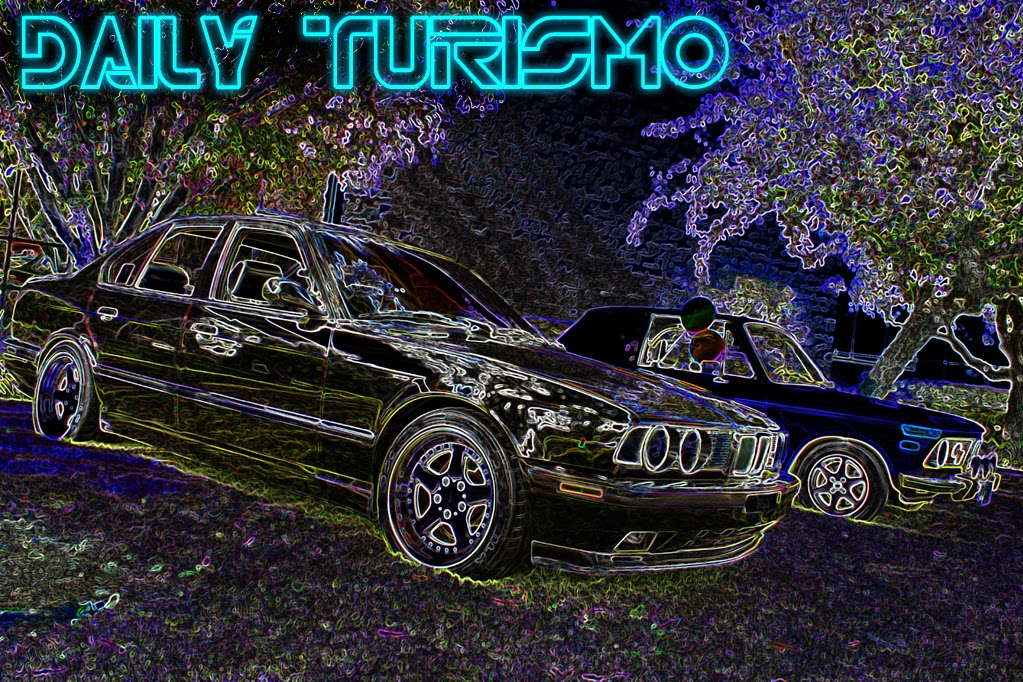 The rear tires were Toyo Proxes4s in 255/40R17, almost 10 years old, and had been in service since before DWood bought the car in 2007. I’m sure they were great when new – and they made for easy and controllable loss of traction at the rear end – but the wear bars had been reached. Cracks were visible, and an 8-9 year old tire shouldn’t be trusted at high speed due to aging of the rubber compounds and the off-chance of catastrophic structural failure. 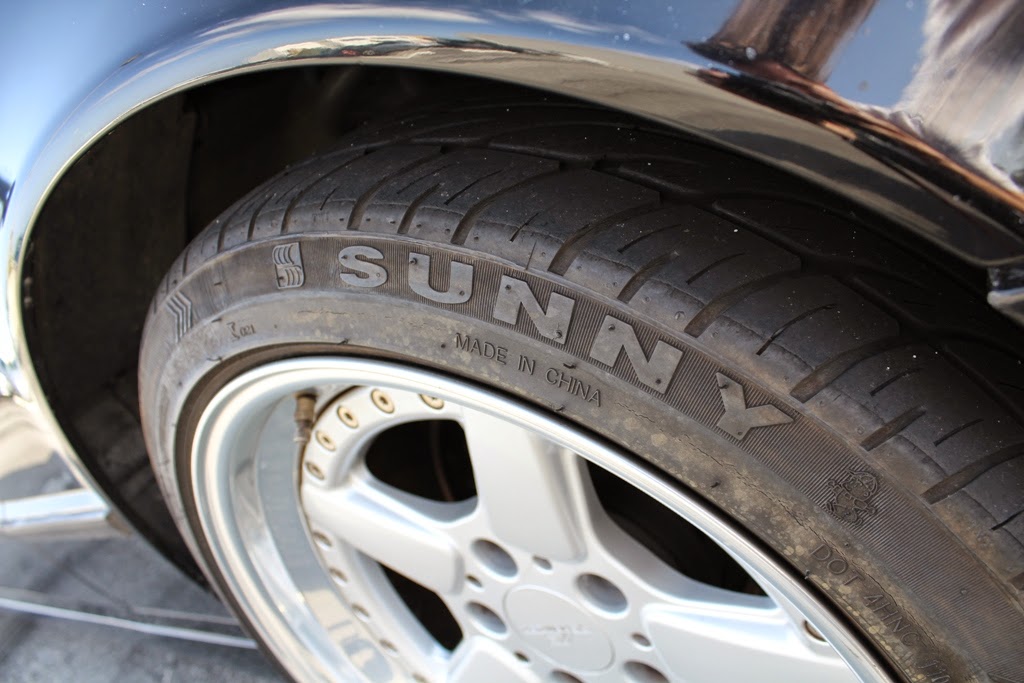 Seemingly unrelated: since being transported from its Colorado sabbatical back to California, the DTM5 exhibited an annoying shimmy starting around 55 mph, reaching maximum amplitude by about 65, then subsiding in severity but still present at all highway speeds. It was a periodic vibration – a lateral oscillation of the front end that would come and go regularly about every 3 seconds on the highway. 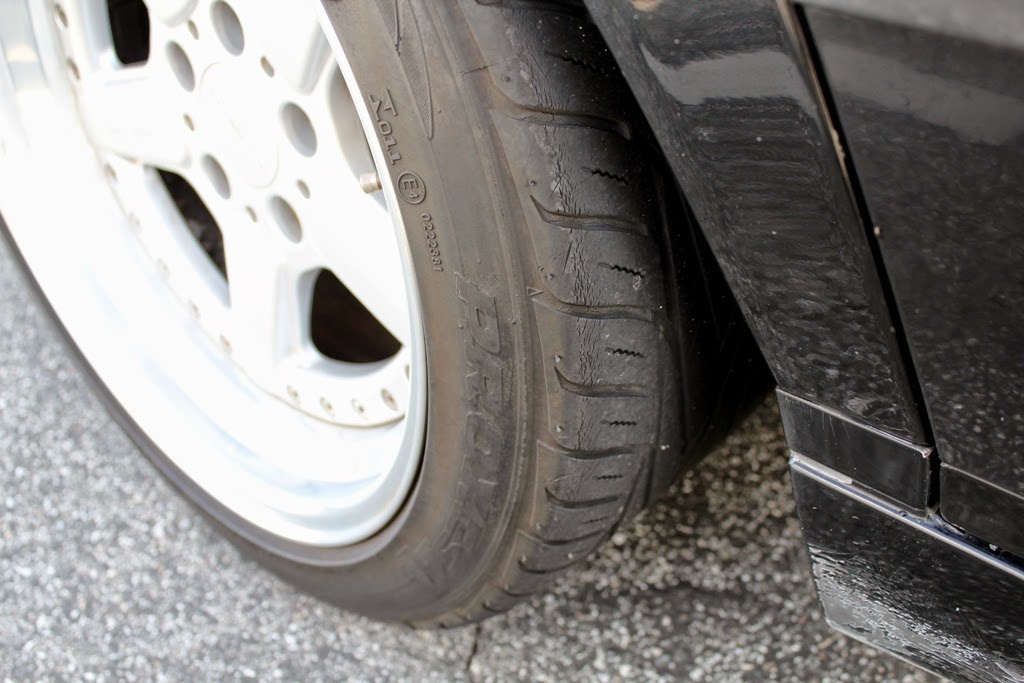 I thought the shimmy was down to worn lower control arm bushings, but previous owner DWood assured me that the front end had recently been refurbished top to bottom with new bushings and aluminum lower arms. I thought “I’ll take a look next time I have the car on a lift,” but gave the shimmy low priority and continued driving around like a cheapskate.

Shimmy or not, the tires on the car in no way lived up to the M5’s performance potential; after a few months of procrastination it was time to replace all four meats.

Enter Falken Tire. This Japanese company has a big presence in the American motorsport market, especially in Southern California and especially in drifting. They sponsor several top-tier drivers in the Formula Drift series – Dai Yoshihara, Darren McNamara, and Justin Pawlak. Their website also lists involvement with the former American Le Mans Series (now known as the Tudor United Sports Car Championship) and King of the Hammers off road race.

Falken makes great affordable sticky tires for enthusiasts on a budget, which is why, as Black Iron Racing, E-i-C Vince and I (along with several others) have used their initial RT615 and later RT615k evolution almost exclusively on our 24 Hours of Lemons / ChumpCar endurance racers. Falken is a proud (and inexplicable) sponsor of Black Iron Racing, so when the opportunity arose to put their meats on the E34 M5 in all of automotive media, how could they refuse? The RT615k is listed as a “Street-Legal Motorsports Performance and DOT-Approved Track Tire.” To me, this makes it a great choice for a high performance sports sedan that will get driven on the street, highways, and the occasional race track – predominantly in a dry climate.

Full disclosure: in exchange for the kind words and images in this article, and a 2 hour drive to their warehouse in Fontana, Falken provided these RT615k tires for the DTM5 at a discount. Funny, they don’t list the 24 Hours of Lemons on their Motorsports page… 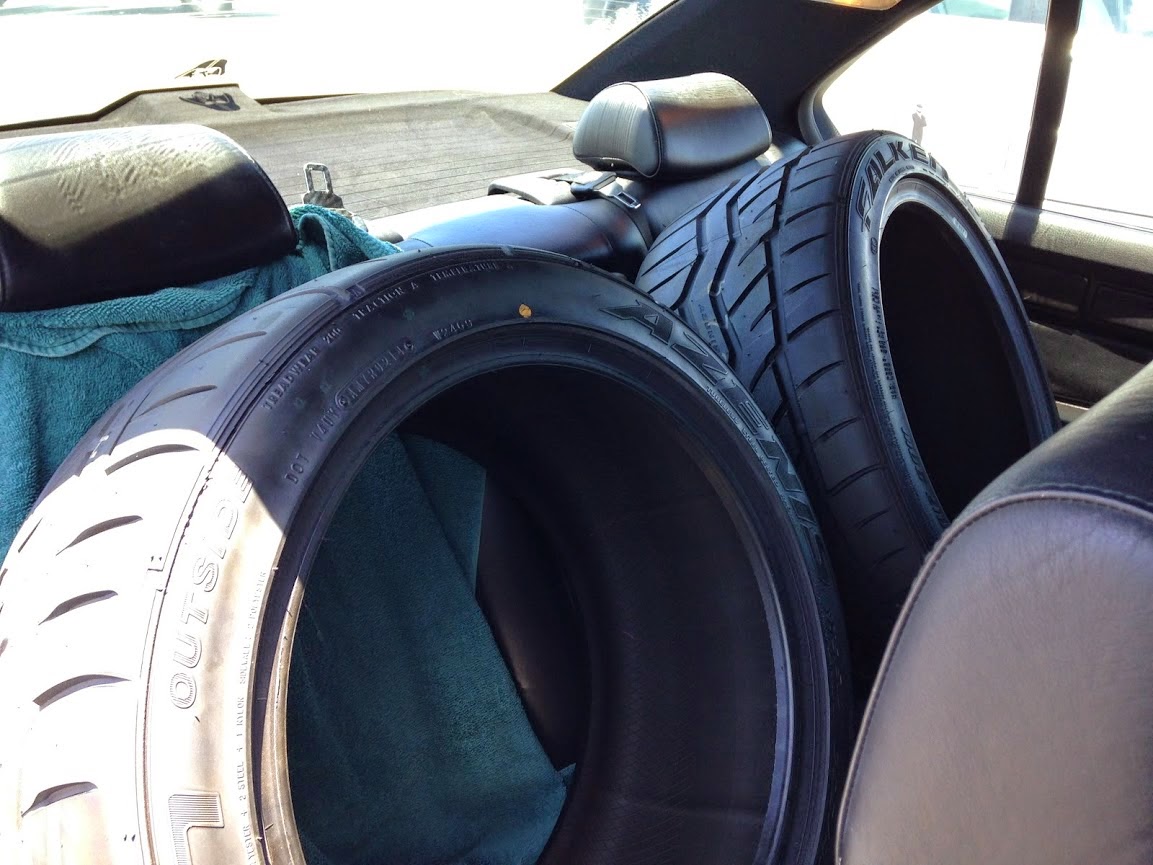 I went with 225/45R17 in the front and 255/40R17 in the rear, which were sizes I knew would fit my ACSchnitzer wheels based on previous tires from the car’s history. So now I had my new sticky tires. But picking them up at a warehouse left me with the task of getting them mounted. Unfortunately we have no tire machine in the extended DT / Black Iron Racing family but usually use a local cut-rate mom n’ pop shop called Tamazula Tire for such tasks. While they have proven to be a great resource, I wanted to be sure that the DTM5’s tires were balanced to a higher standard given the high speed capabilities of this executive express BMW. 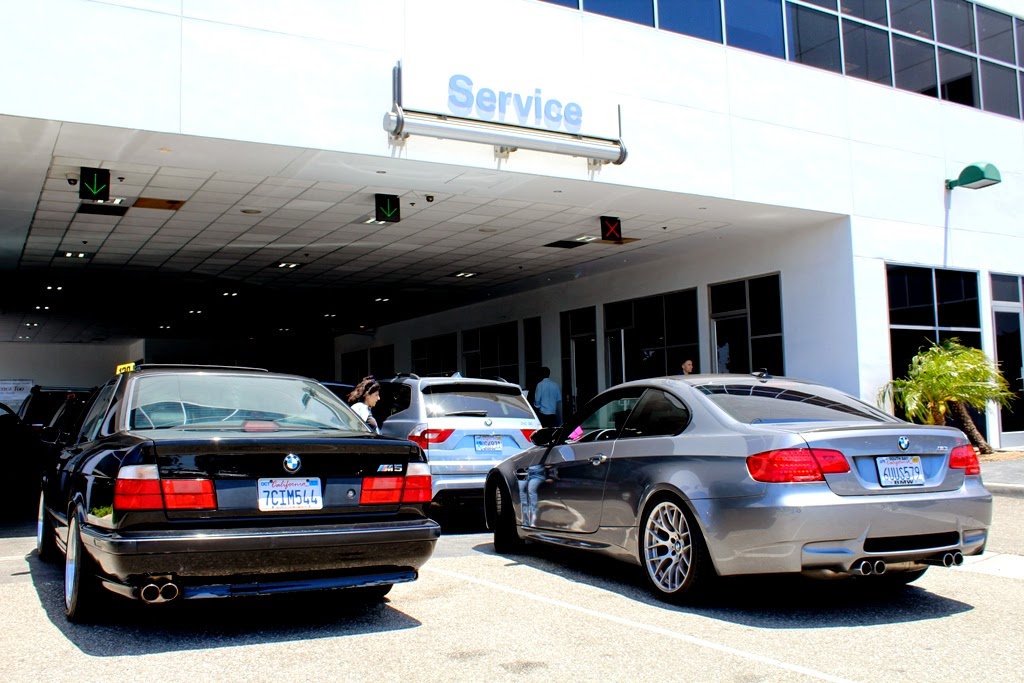 So at the suggestion of a friend, I took the car and my four new tires to South Bay BMW in Torrance, CA. This dealership is directly adjacent to Penske Cadillac (formerly Ronald Moran Cadillac), which appears in the original Gone in 60 Seconds when the ’73 Mustang and pursuing police car both crash into a line of brand new Caddys. To my mild surprise, South Bay BMW gladly accepted the job to install tires I hadn’t bought from them, onto non-OE wheels, on my 21 year old car. Upon arriving at their service area I was treated the same as someone who’d recently purchased a brand new 2015 M5 for $93,600+…but I was only going to spend $117. 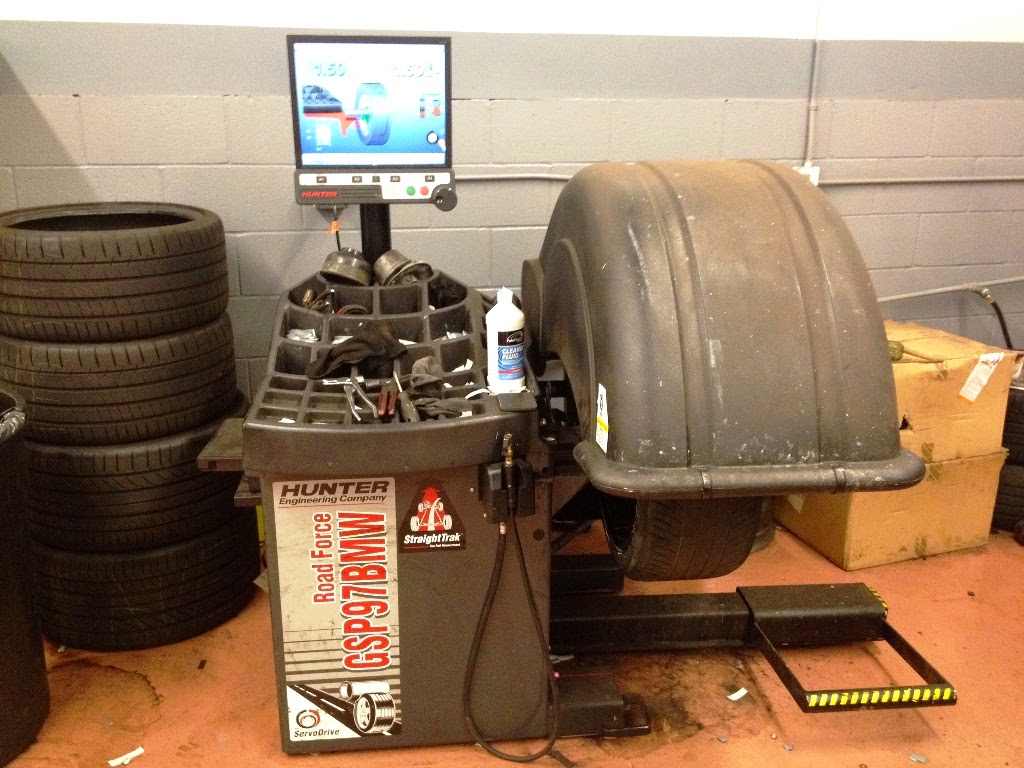 The DTM5 apparently caused quite the disturbance in the force workshop, with service managers and technicians checking out the car as productivity took a measurable dive. South Bay’s tire guy used a Hunter road force balancer to make sure the tire/wheel combo was going to be as smooth and vibration-free as possible – important for a high-speed cruiser. They mounted the tires on the wheels, installed them on the car, washed the car, and gave me free shuttle rides to and from my work during the day. They were even prepared to give me a loaner car for the night when they thought the tire guy was going to go home early.

As a result of this experience I can say: if you have an older BMW and need some light work done, I highly recommend trying out your local BMW dealer – especially if the car is going to attract attention for them or get the employees excited because of its relative rarity.

Out on the road again, and this car is as smooth as it was back when it rolled out of the hand-assembly workshop in Garching in 1993. The front end shimmy is completely cured and highway driving is so much quieter and more pleasant now. 100 mph now feels just like 60 mph; the only difference being a visual sense of speed from stuff outside the windows flying by faster. The M5’s long Autobahn legs (i.e. tall gears) really shine through without any annoying vibrations and I can’t wait to take it on a longer road trip…once I fix a leaky oil pan and rebuild the shifter. 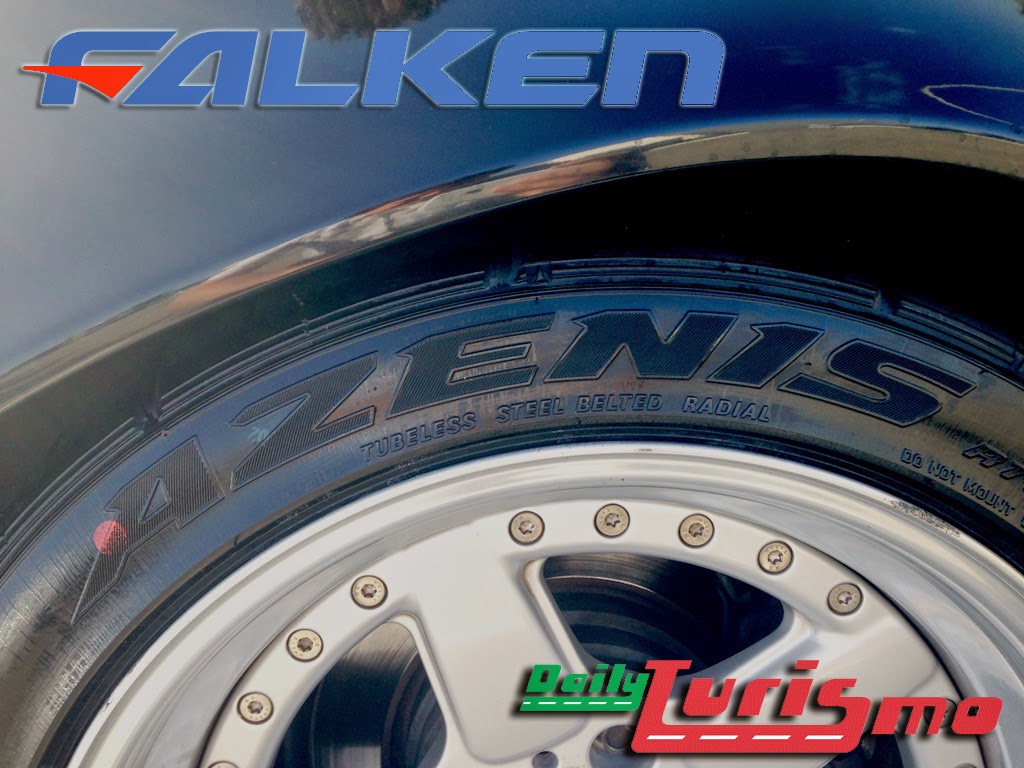 It’s always something with an older bargain performance car. But that’s the fun of owning a “modern classic” like this – curing previously existing ailments and making it better and better as time goes on.

I haven’t had the car on a track or autocross course yet but when I do, I’ll try to quantify the grip potential of the Falken RT615ks with my handy (and cheap) iPhone datalogging app. On our E36 325i Lemons car these tires let us maintain high steady state cornering speeds, communicate wonderfully back through the steering wheel, and last for an entire 14 hour or 24 hour race. They are not as grippy as an R-compound (i.e. “full race”) tire but they strike a nice balance between life and traction. The DTM5’s rear end doesn’t break loose as easily now, but that just means I have to thoroughly commit to the slide.

Honing my driving skills while hooning; it’s a noble pursuit.

All of the Daily Turismo project car posts can be found here. That’s right – the DTM5, Draken, Schmetterling and our old 242, all in one convenient link!