As we mentioned the other day, DT was able to attend the Coronado Speed Festival (we will do a full writeup with pics after we recover from sunburn and photoshop the lens dirt out of our images) and we found a bit of RoadKill that turned into a Seller Submission.  This DT exclusive 1960 Austin Healey Bugeye Sprite has a Rover 3.5 liter V8 swap, a ton of suspension work, fantastic body and is for sale in San Diego, CA for $24,995 asking…yes, a bit above DT’s normal budget limit- but the seller was a nice guy and said he was willing to take offers (see image below for contact details). 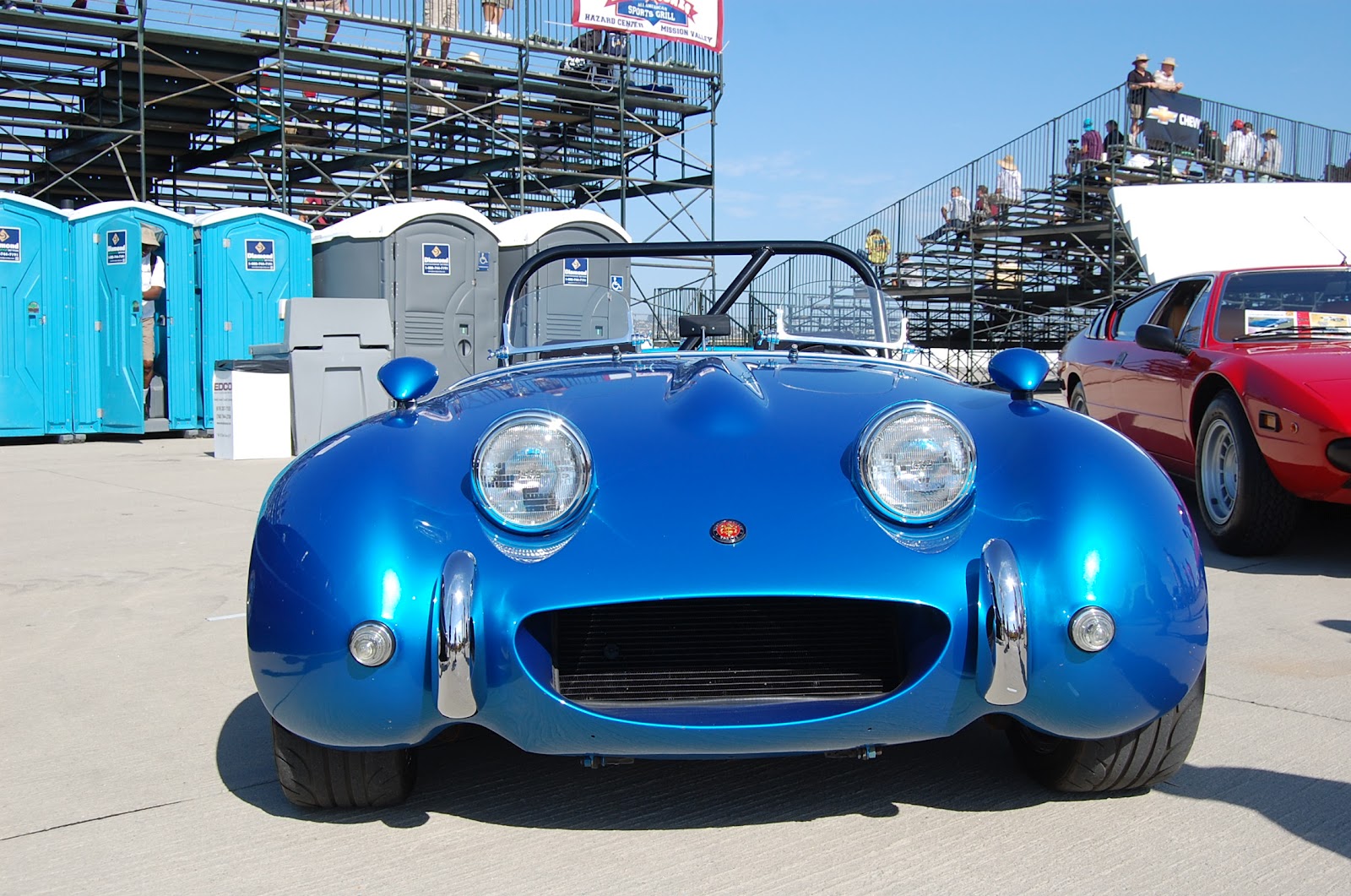 Parked right behind the track grandstands was a car corral filled with American muscle cars, Italian sports cars, and one particularly unique British roadster.  The Austin Healey Sprite was known as the ‘Bugeye’ in the US and the “Frogeye’ in the UK…we can only assume that Frogs look like Bugs in dreary overcast Britain… 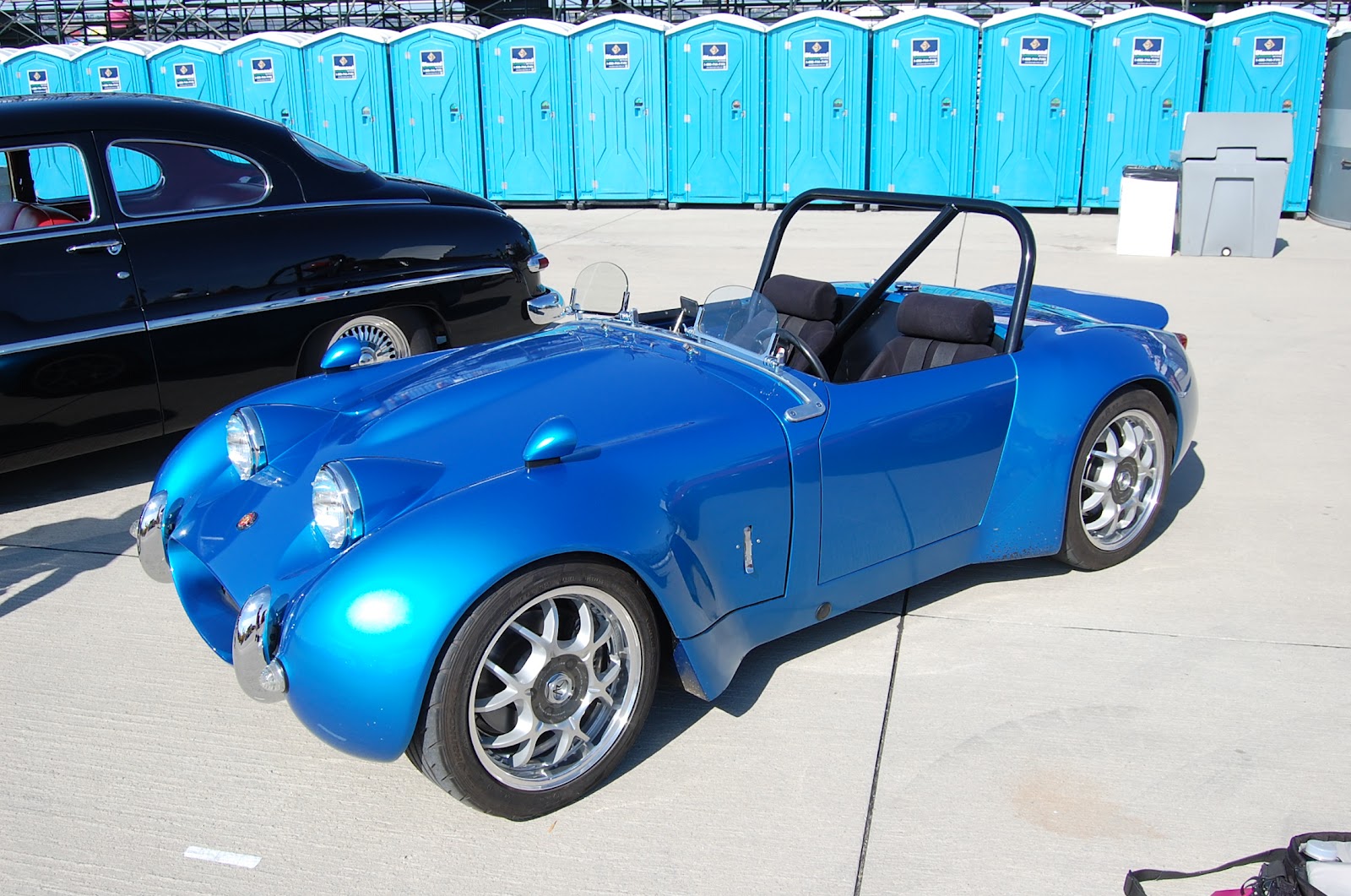 But it wasn’t dreary or overcast in San Diego and this Bugeye looked fantastic in a shade of blue; we are ashamed to say we didn’t ask the owner where it came from.  However, it was much deeper than the port-a-potties in the background, so we can surely say that while the front clip on this Healey was made from fiberglass it in no way resembled a port-a-loo.  But the paint was nice – show car quality stuff and it didn’t look like it was shot with cans of spray paint in someone’s garage. 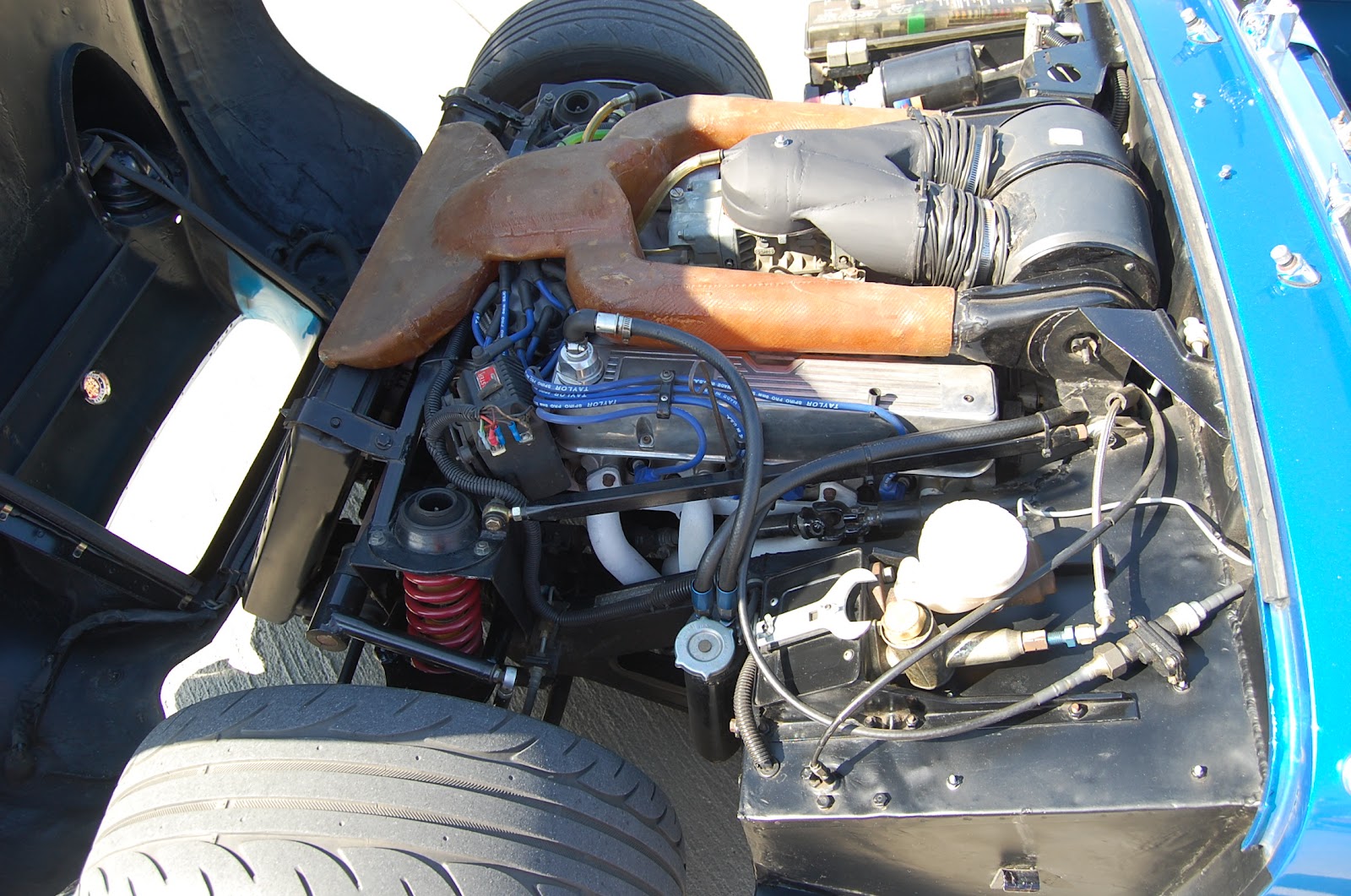 We did have a nice chat with the owner (Glenn) about the engine and its mechanicals – the stock 0.9 liter inline 4 has been replaced with a Rover 3.5 liter V8 (originally based on a ’60s Buick design – and it’s all-aluminum!) that has been massaged to make more horsepower and mated to a “World Class” T5 manual transmission.  We would expect somewhere near 300 horsepower with this combo and sunk into a 1500 lb Sprite chassis it should be a fantastic driver!  We especially liked the custom built cold air intake that brings air back into the stock airbox. 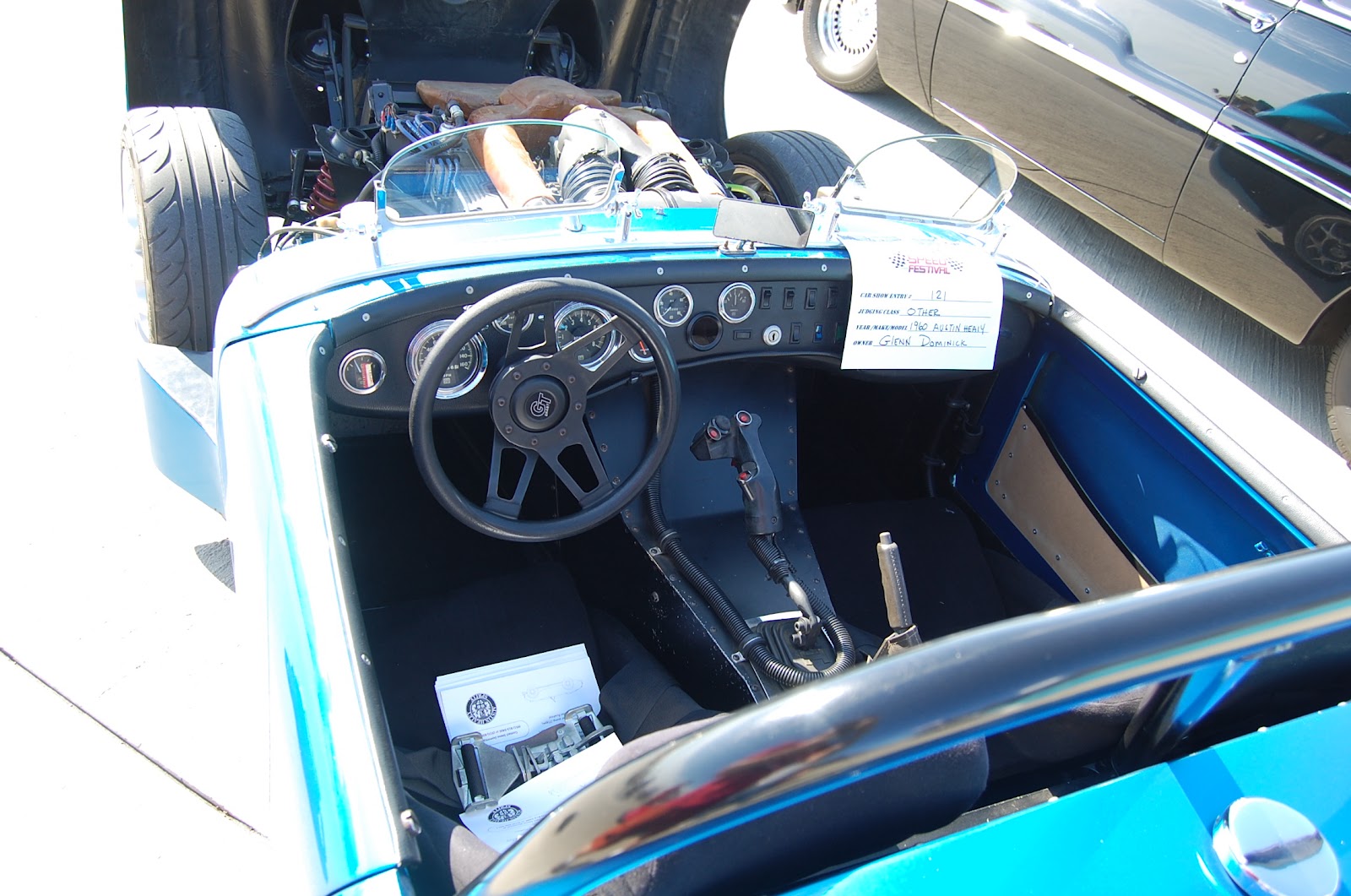 Inside is standard Bugeye interior – with the exception of a airplane style joystick replacing the shifter – which was just perfect considering the fact that this car was being shown on a Navy base during the “Fleet Week” celebration.  We don’t assume that the buttons/switches are hooked up to any rockets/guns/missiles…but there is an ominous looking wire loom running very close to the joystick. 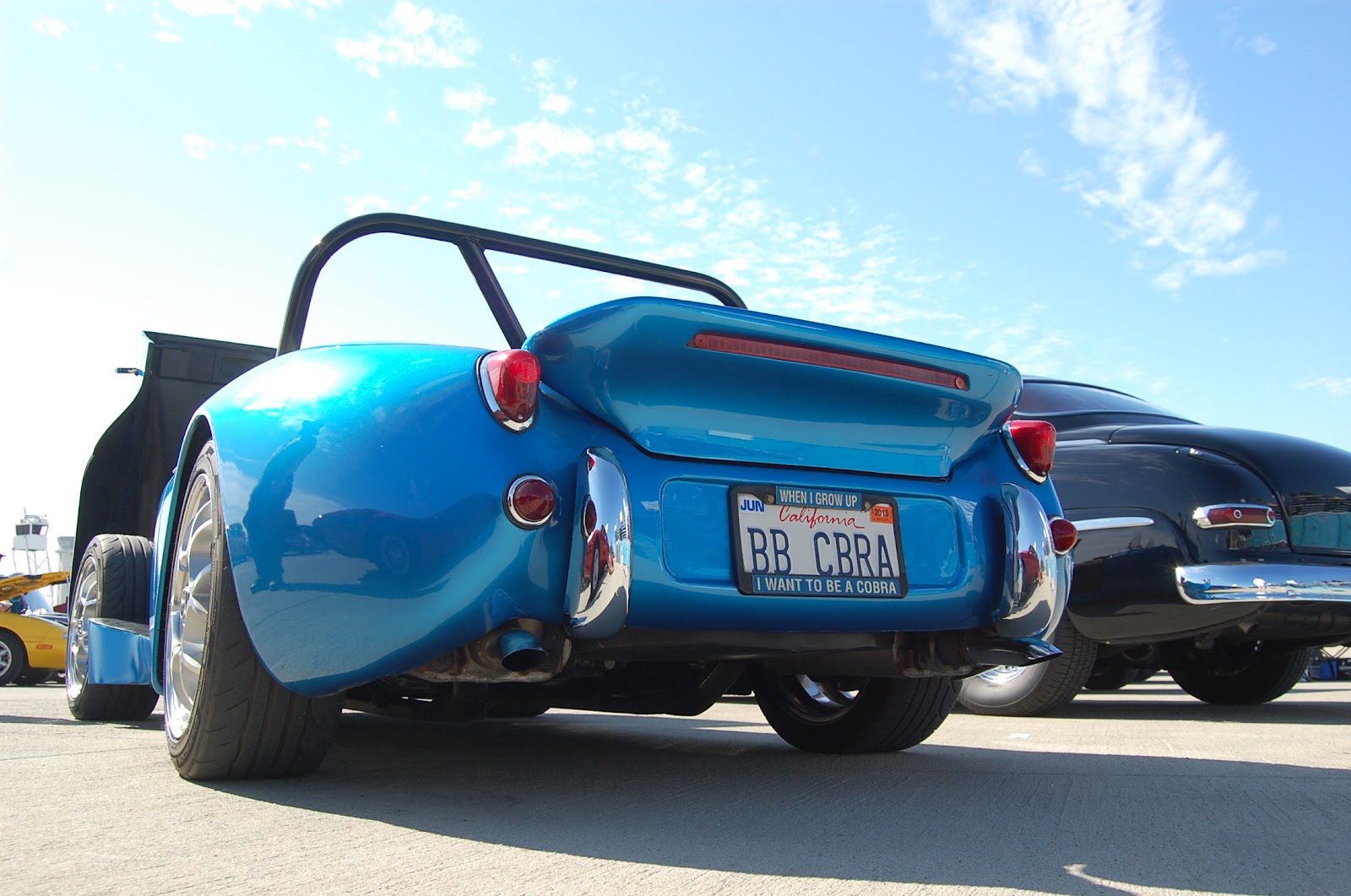 “When I Grow up I Want to be a Cobra” reads the license plate frame and it really is quite fitting given the small British car with huge American V8.  We’d much rather have this than a Cobra Replicar – that is certain and not just because this 1500 lb roadster has a power/weight advantage, but also because it should handle well with its 4 corner coilover suspension and rack-and-pinion steering.

The seller had a flyer with his car detailing the info, and we have included a copy here. Please contact Glenn via the number provided above if you would like to purchase this car.  If you are reading this in 2016, please don’t assume the car is still for sale and do not call Glenn at 2am. 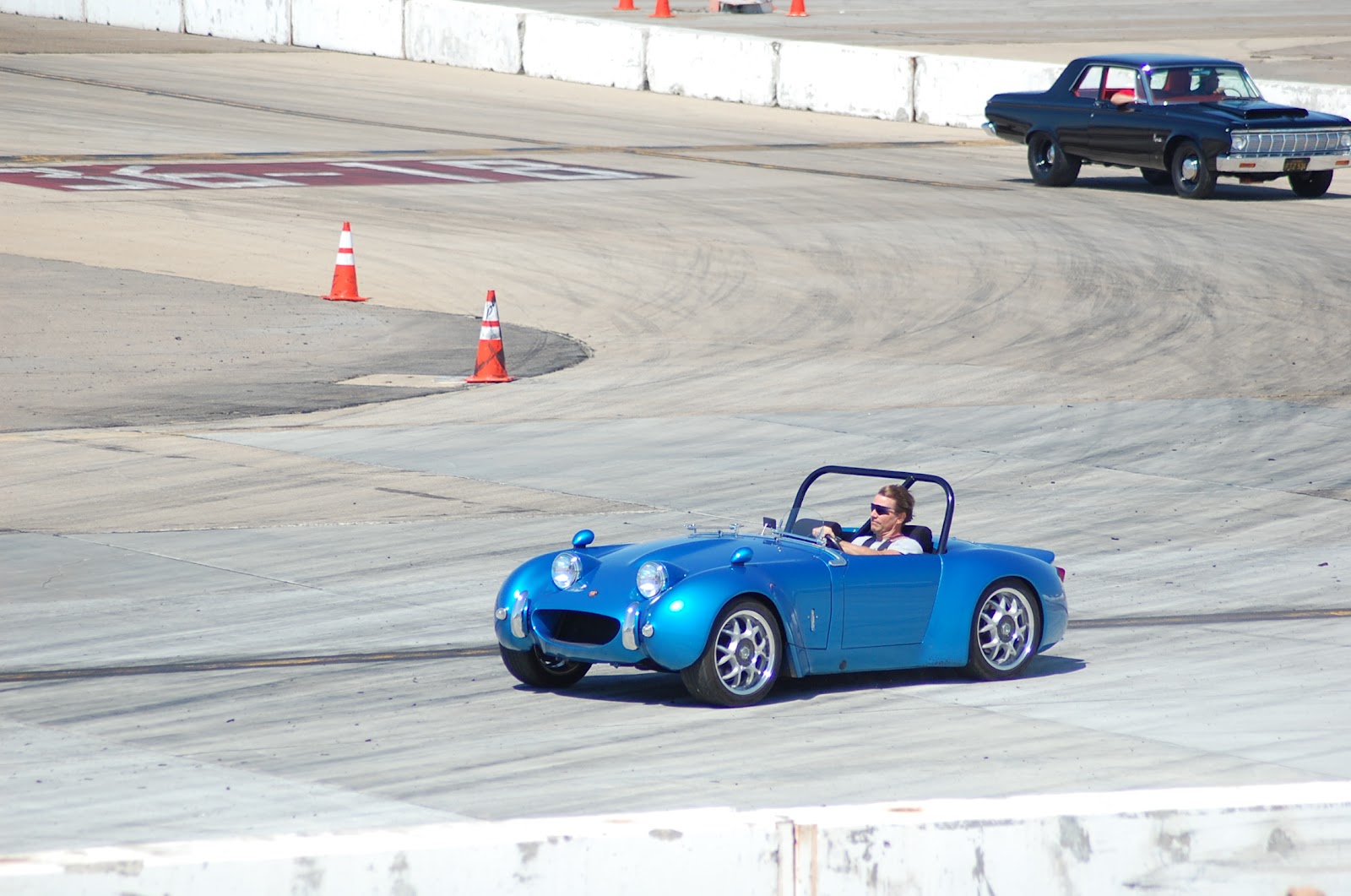 Whoa – why is he racing your future ride against a tubbed Plymouth on track…ok, he isn’t racing – he is on-track for a victory lap that the winners of the car show got to participate in.  So – add “show winner” to this Bugeye’s resume…lets just hope the asking price didn’t go up…  But we think this car could be a competitive contender in a prepared or modified class at your local SCCA autocross event.

Have your own monster creation you’d like to offload?  Email us here:  mail@dailyturismo.com