In the fall of last year, the decision was made to sell my long time project car after realizing it did not made sense to have a wagon as a weekend driver.  I had been following a listing for a 1995 Mercedes C36 AMG the better part of six months out on on the very east end of Long Island.  The asking price had dropped low enough to the point where I had to find a way to go see the car.  Armed with my wife and I’s ATM cards, I made the hour and a half ride further east after doing some legitimate work out on the island.  The car was for sale at a gas station garage where the owner had clearly given up on the car.  A deal was made for made for $1000 clams and it was towed back to it’s new home a week later.  Initially, the thought was to create a 3.6 swapped W124 coupe, but things took a different direction after digging into this car further. 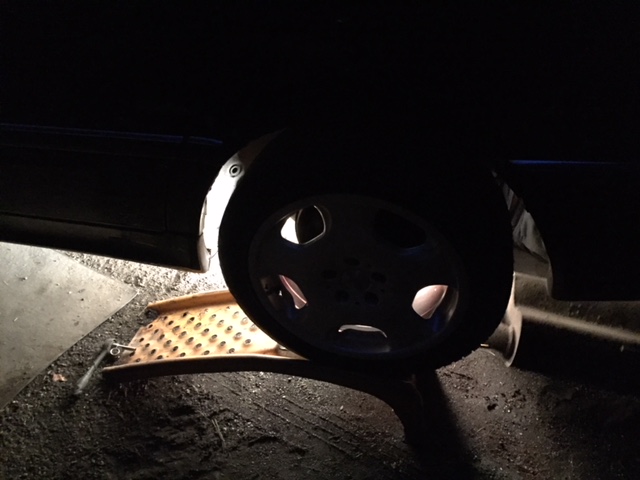 This C36 was not running properly largely because someone had hard wired an aftermarket amplifier directly to the fuel pump relay (next to the battery in the trunk) which caused the fuel pump to run continuously regardless of the car was running or not.  They installed a quick disconnect on the battery to make it easy to work-around this issue.  The very first thing we did was remove all of the aftermarket sound system, all extra wiring, and everything related to the aftermarket alarm.  At this point, the car would run and drive relatively normally.  We noticed a few unique and desirable features to the car: it was a non-asr (electronic traction control) that was a 1995 only option, it has virtually zero rust and was super clean underneath, it has a Mercedes rebuilt transmission (list price of something like 7k),  and lastly that it had a shorter 3.07 rear diff rather than the stock 2.87.  The car ran very strong and was noticeably faster than my 3.6 wagon.  My buddy and I decided this was a car worth saving and made a plan to refurbish the car and turn it into my new weekend driver.  Many weekend wrenching hours, internet surfing, parting out cars, and cross referencing part numbers has gone into getting the car into shape it is now (which is not concours condition or close to be honest).

Here is a picture of how it was when delivered to me: 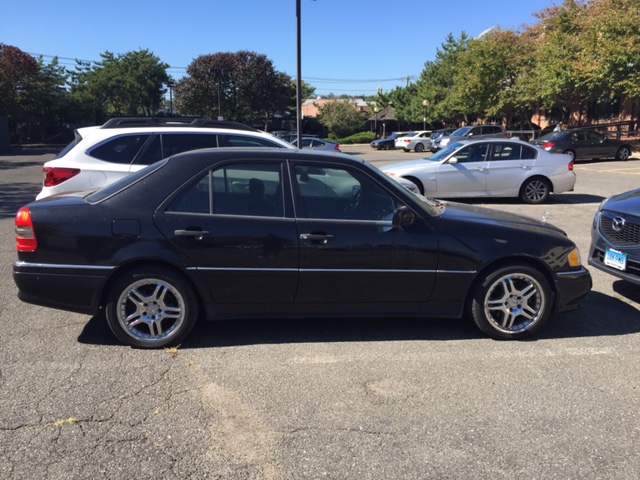 The headliner of the car had fallen and all the car audio needed to be ripped out so we completely gutted the trunk and interior of all trim and panels.  With everything out of the way, it was fairly straight forward to remove all the audio and alarm wiring.  The mechanical work went as planned for the most part.  The picture before the jump does show a late night drive shaft replacement.  The center bearing and bushing on the driveshaft was destroyed.  The motor mounts had to be original to the car and one of them literally split in two pieces when it was removed.  There is a reason why no one touches the emergency brake systems in these cars and deals with the idiotic spring design holding the shoes to the hub.  It turned out to be a giant pain in the neck and was the only repair that I reached out for help from my local mechanic.  In the last year, I have bought a beater C43 parts car and more recently a beater C36 parts car.  The C43 has been totally stripped except for mechanical stuff and may be making a turn as a Lemons racer in 2018.  The parts C36 donated many interior trim pieces as it had been garaged for the last seven years and had not been exposed to the sun.

Work done on car to date: 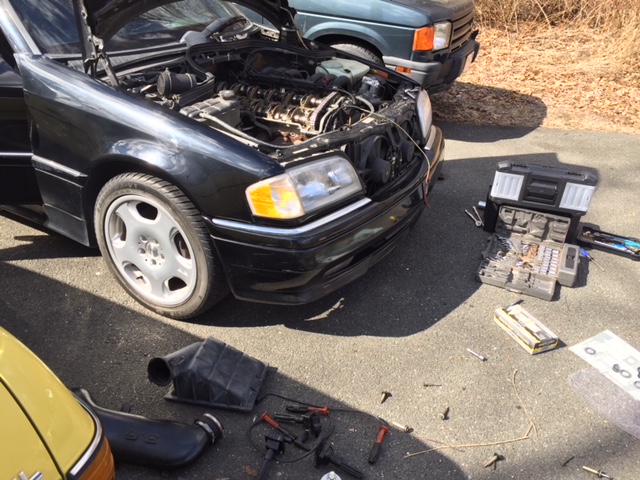 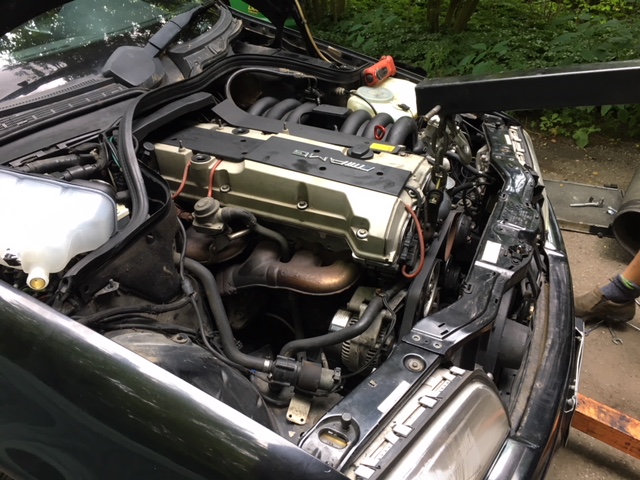 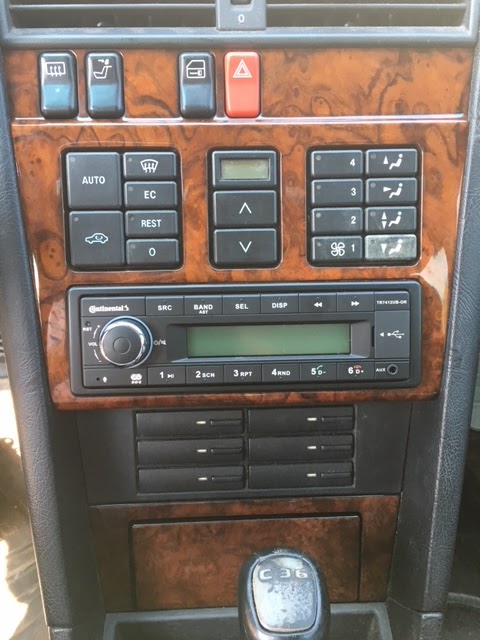 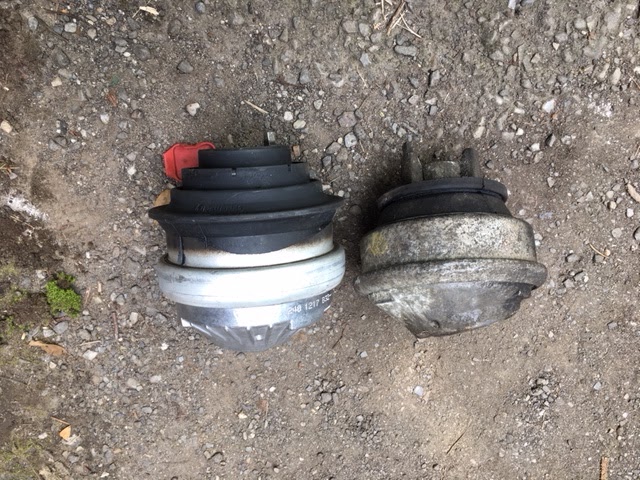 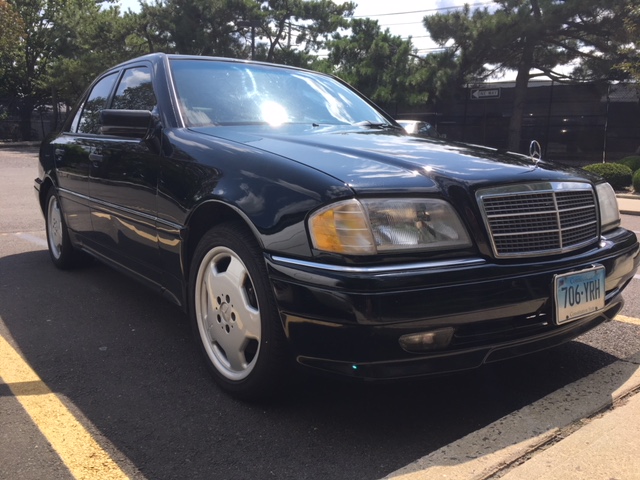 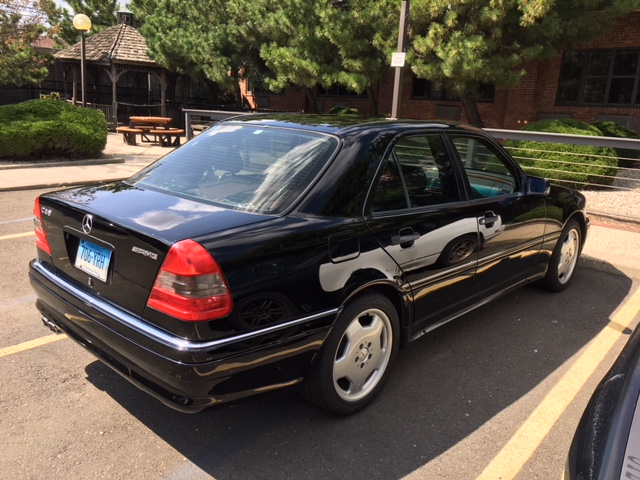 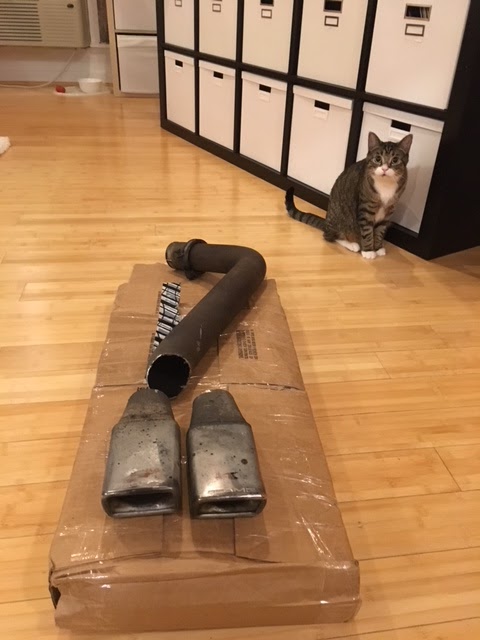 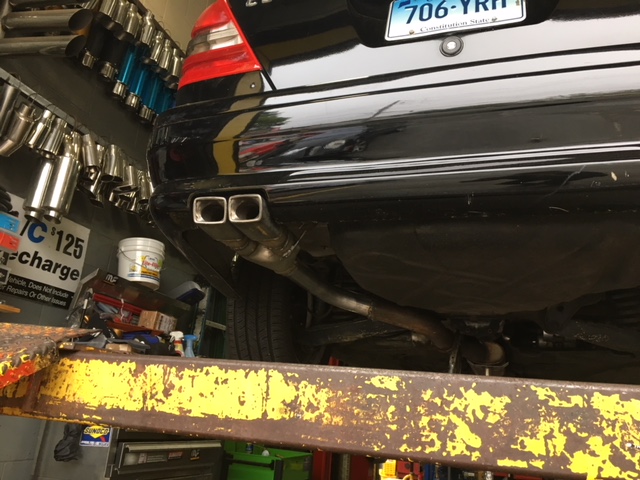 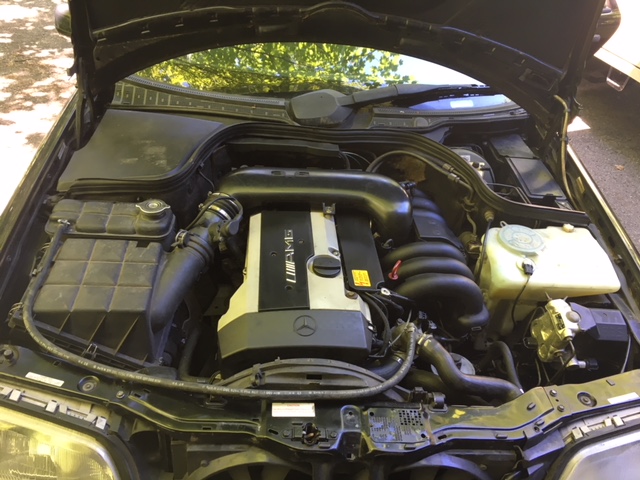 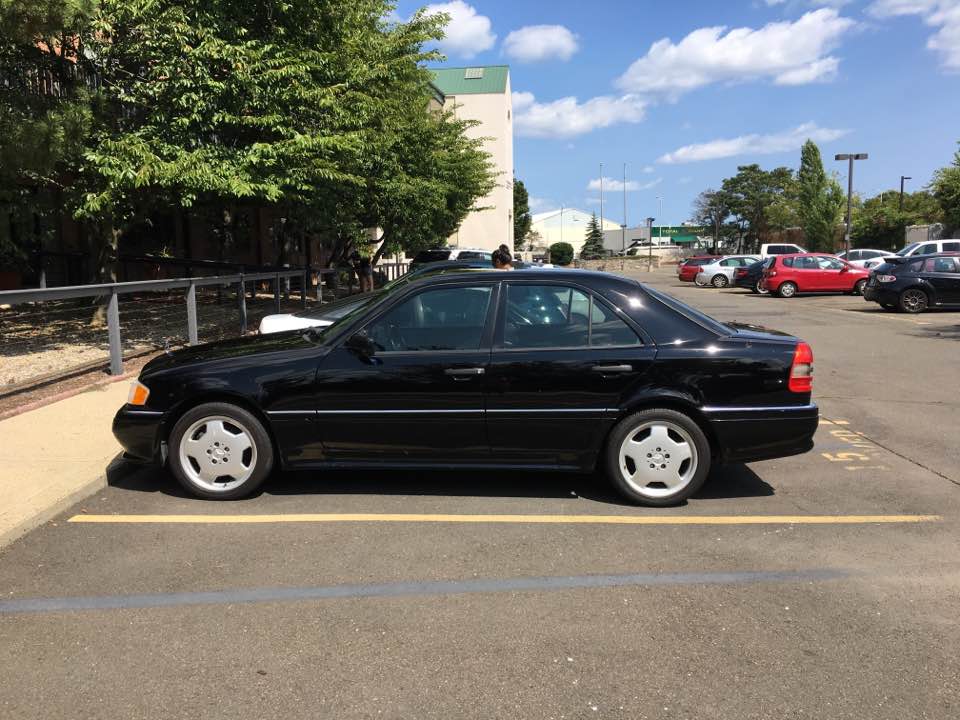 Future plans and things on left to do:

Despite having a rebuilt automatic, the transmission is by far the worst aspect of the car and a poor match for this glorious engine.  I recently bought a 5 speed manual transmission swap kit from a UK 1994 C280.  The parts are at my friends family in the UK.  He is headed there for Christmas and will handle shipping all of this back across the pond then. The most recent C36 parts car came with some extra parts.  One of them was a 3.27 LSD differential out of a 190e 16V Cosworth.  The short LSD diff will go in at the same time as 5 speed trans and should be a win-win as the .8 overdrive 5th gear in the trans makes it better than stock on the highway.  We are almost positive the current catalytic convertors have disintegrated and blocked up my exhaust system.  The parts car system has “test pipes” on it and is noticeably louder than my car.  The two systems will be swapped and hopefully the issue is squared away.  There are a few small vacuum related problems that will get some attention.  If the weather cooperates, I will get to reinstall all trunk trims back into the car.  Lastly, the clear coat on my hood is beyond repair so I am on the lookout for a good black hood from another W202 car.