Welcome to a special weekend edition of DT’s Commenter of the Week (COW!) award, back from hiatus and ready to rock like the Rolling Stones after bi-lateral hip surgery.  This week’s COW award goes to a commenter who left a doozy of a comment starting with the four simple words  Ah, the Saab 9000.

We had a 1992 9000 Turbo. It served us
long and well. It was my wife’s car, and therefore a slushbox. If it
had been a manual I’d have never, ever, ever gotten rid of it. The ZF
4HP18 transmission lasted the nearly 200K we had the car, but it was
never a particularly happy match for the engine.

The rest of
the car, however, was magnificent. Nothing short of a VW bus has ever
touched the 9000 for the ratio of interior volume to exterior size.
Think of it as a big second-generation VW Golf. Tremendous driving
position, great outward visibility (something most modern cars utterly
suck at). Good chassis, the ‘90.5-up B234T engine is a great hulking
brute with enough beef to go to 350HP on a stock longblock if you’re so
inclined, the manual transmissions come from the GM F24/F35 family so
there’s a nice Quaife diff to keep the one-wheel-peel under control,
from mid ’96 the B234T used the GM Ecotec bellhousing pattern and I
think there’s at least one 9000 running around with an F40 6-speed box.

It’s
not a perfect car – Saab never quite had the money to do proper
durability testing so the first year of any new major feature can be
troublesome. The B234T engine had some early cam-sprocket problems but
was otherwise solid (still needs a cam chain/tensioner every 150K or
so), the crappy 4HP18 transmission if maintained less troublesome in the
9000 than in its various other BMW, Peugeot, Audi applications where
it’d blow up from being run at 2500RPM in neutral during smog-testing
(maybe the fact that the transverse Saab case mounted the gearcase and
valving upside-down helped with that?), when GM got their hands on Saab
they stuck their benighted little 54-degree DOHC V6 in a few 9000s and
ended up paying for 30K-mile cam-belt jobs forever on those cars,
suggest avoiding those.

The electrical system in the 9000 was
quite elaborate and sometimes troublesome (and Saab didn’t help matters
for the owner/mechanic by changing the electrical system significantly
from year to year), the two-speed radiator-fan thermoswitches and
resistor packs were a notorious problem, as with all Saabs of that day
the crank damper would shed its damping ring the first time the bonded
elastomer came in contact with even the slightest whiff of oil and the
headliner would begin its descent to your ears after a few years.

The
’86-92 cars did not have much front fender room, the ’91-92 pre-Aeros
came with a 205/50-16 tire and attempting to go larger (even a 205/55)
would result in the fender-lip mounting studs carving up your sidewalls.
Some quality time with a cutoff tool getting those studs cut down
flush with the nuts, and a lot of measuring and trial-fitting, yielded a
set of 16×7.5 Ronals and 225/45-16 Goodyear GS-D3s that worked
beautifully, no rubbing, tons more grip and better ride to boot. Alas,
the 225/45-16 is one of those tire sizes that is dead as a dodo. The
’93-up cars have more fender clearance.

The 9000 was not a pure
Saab product, the design was a joint venture with Fiat and (then
separate) Alfa Romeo. The cars that resulted – the 9000, the Alfa 164,
the Fiat Croma and Lancia Thema – were all quite different from one
another, though. Lancia actually pushed a Thema out the door – the 8.32
– with a Ferrari-based 3-liter V8, think it had a 90-degree crank, it
was not terribly powerful but then open-diff wrong-wheel-drive couldn’t
take much more than it put out anyway. 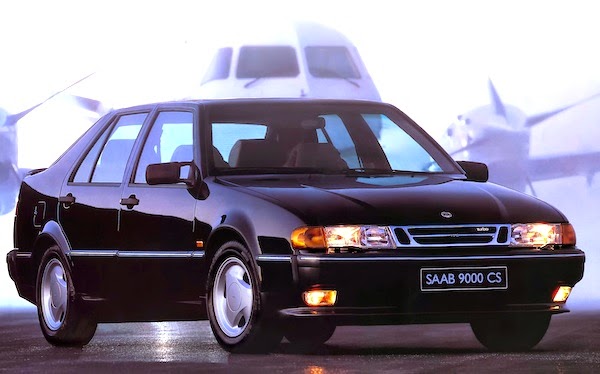 EIC Vince: Frankly, I have to admit that this sort of comment puts the original article to shame and reveals the incredible depth of knowledge of the DT commenters.

Congratulations on your COW win mkwong.  See a comment worthy of the coveted COW award?  Mention it in the comments or hit us with an email: tips@dailyturismo.com