Commenter of the Week: Quality and Quantity

The volume and quality of comments on the pages of Daily Turismo have increased so rapidly recently that I’ve had a hard time giving out the temporally maligned COW award.  In the past, I’ve been quick to hand it out to the best zingers, one liners and belly ticklers.  Today, however, I want to award a commenter for a thoroughly detailed and exhaustive analysis of a featured car and point out that this commenter did more to evaluate to car that I did in the original feature.  Just an excerpt:

Overall, there was quite obviously a load of solid work put into this car. Looks like they took the conservative, stock-ish approach with the engine which with the non-squirter, skinny rod block and tiny turbo is a good thing. Just get the CBV situation figured out, throw an airbox on there or a heat-shielded cone and enjoy the other guy’s investment for the next 100k or so. 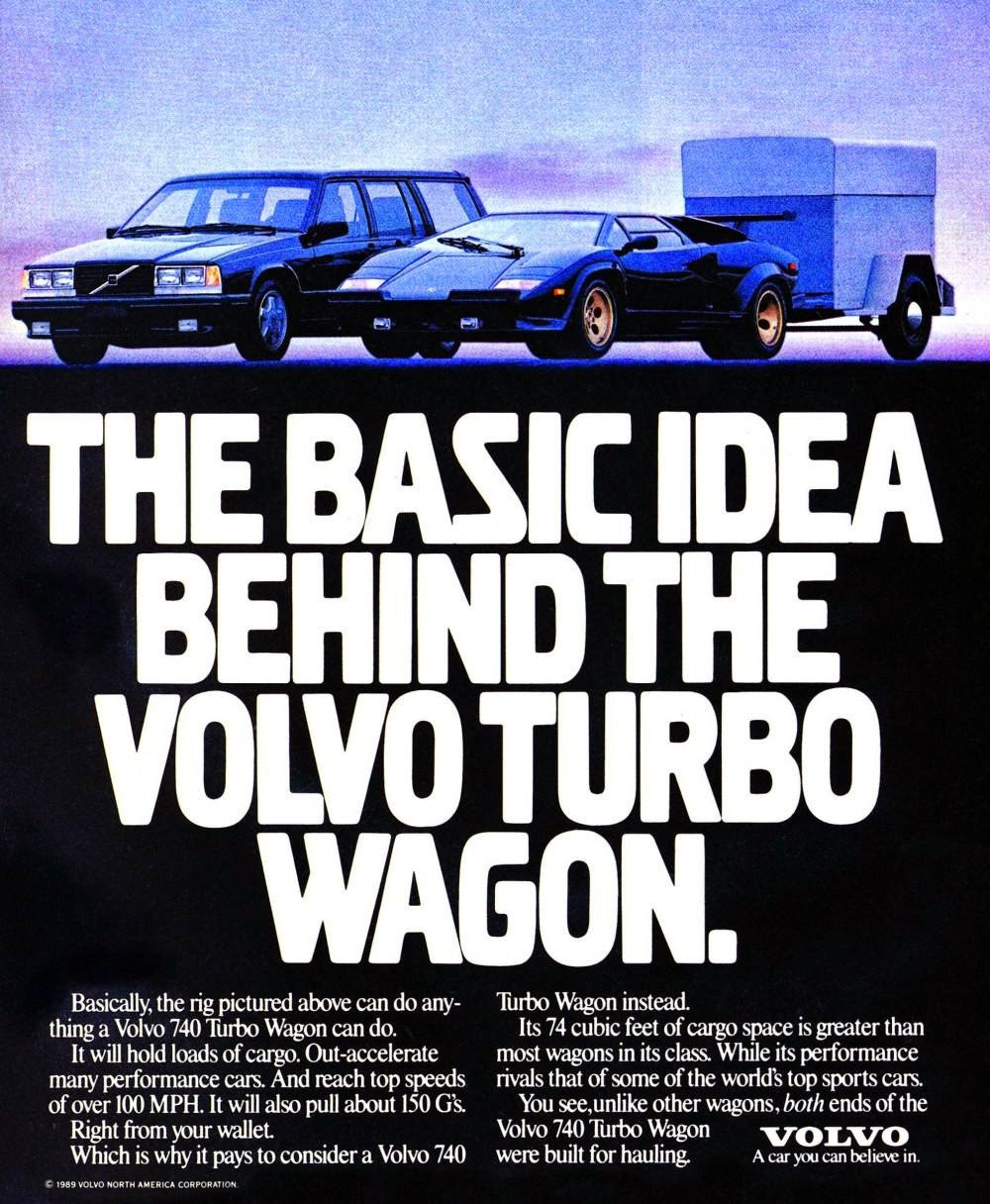 Congratulations to RyanM for his comment on the Volvo 242 repeat offender sedan.  Very detailed and thorough — the kind of analysis that I should have included in the hastily hacked up article written by me!  RyanM’s award is this classic Volvo advertisement featuring a 745 turbo wagon.

The disjointedness that follows is about 5 minutes of unfiltered
thoughts spread across 5 hours of work, written as I had spare time. I
apologize in advance.

A
few minor details in the engine bay – has the head-mounted bypass valve
indicative of this car at one point having a Garrett T3 on it. It’s
disconnected from vac, the compressor-housing mounted CBV of the Mitsu
(late TD04-13c, also of note it has the more desirable – and crack prone
@ the collector – “round” quasi-tubular exhaust manifold) that’s
currently on there is performing the bypass valving. It can itself be
bypassed with a block-off plate, and the external valve can be used…
but I’m not sure why it’s on there in the pics. Next owner should
figure it out, either run the TD04’s CBV and get the correct hot-side
intercooler piping / AMM-to-turbo hose or use the external T3 bypass
valve w/a block off plate. No need to have 2x cbv’s on there… that’s
asking for boost leaks.

It’s missing an airbox / air filter. No
biggie, probably just for the pics, but in case it doesn’t have one I
wouldn’t run it for… well any period of time like that. There are
screens on the AMM but they aren’t going to keep the dust off of the AMM
or out of the compressor.

Not sure what’s up with the strut
towers… where the nuts went, and if those slots are a factory thing…
looks like a lot of attention was paid to the suspension so I wouldn’t
worry about that little detail.

Injectors look like brown tops
(35#/hr) and it looks like a stock-type FPR (those can be had up to 3bar
maybe beyond?), so fueling won’t be an issue with that little baby
turbo. Go up to a 16g, I’d get an RRFPR and a Walbro. Bigger than that
(18g+) I’d go megasquirt and bigger rods.

See another comment worthy of the coveted COW award?  send us a tip — tips@dailyturismo.com