Another day, another Daily Turismo Project Car — time to introduce everyone to Draken (Dragon in Swedish).  I decided it was time to pick up something inexpensive to use as a part time driver while fixing up a few of my other cars.  The criteria was simple, just a car that has seating for two adults, three kids, costs about $3k and can be manually shifted.  The three thousand dollar price range on Los Angeles craigslist is like a minefield full of life’s bad decisions; finding the right ride took a few months.  Japanese econoboxes and ‘Merican sedans reign supreme, but the occasional German, Eye-talian and Scandinavian depreciation special shows up.  I ended up test driving an E28 535i and a few other common “enthusiast” cars but when I stumbled upon the Draken, I knew it had to be mine. 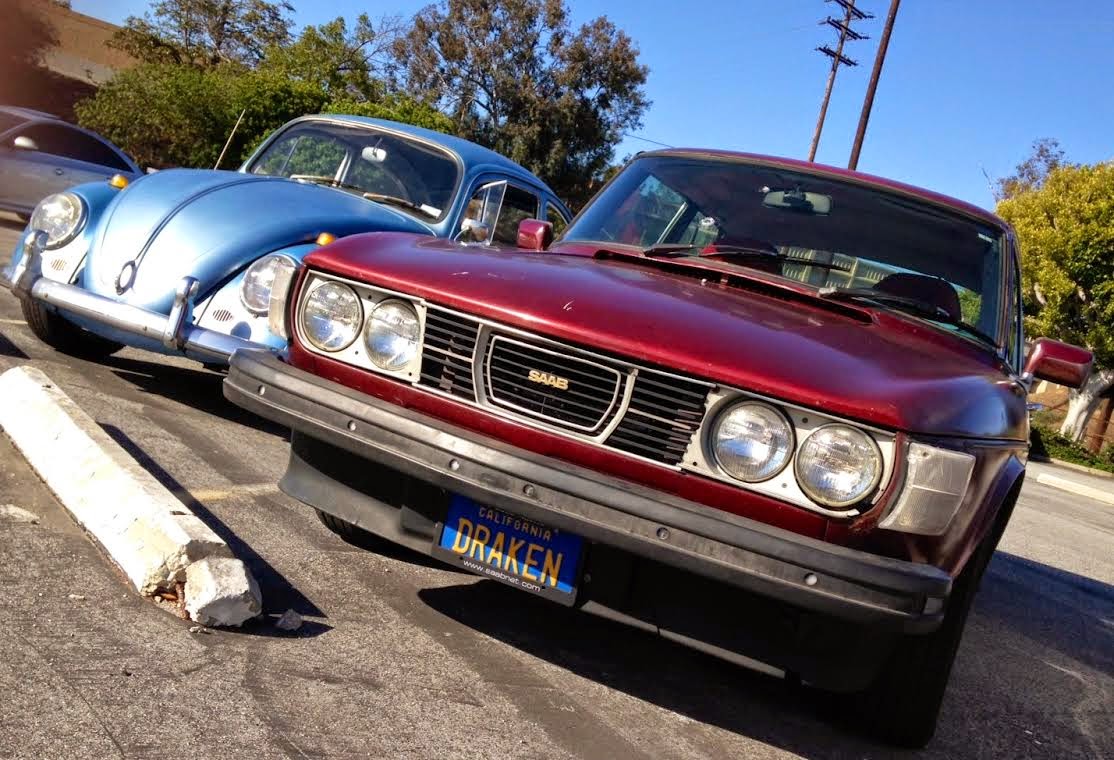 The Saab 99 was built from 1968 to 1984 and lives in the land between classic Saabs like the Sonett, 95, 96, or 97, and the newer styled Saab 900 and 9000.  It checks all the funky boxes you’d expect from a 70s Saab — quirky styling, wrap-around aero style windshield, bizarre front engine mounted above transmission putting power to front wheels, and front hinged hood.  From a electronics perspective it splits the difference between the simple “fix it with a new wire” early cars and the later “oh lordy, why do my wipers turn on when I hit the horn, time for another #%#@&! control module.”  Similarly, the mechanical components are also a mixed bag when you compare performance and reliability.  Some good, some bad — pray for the best! 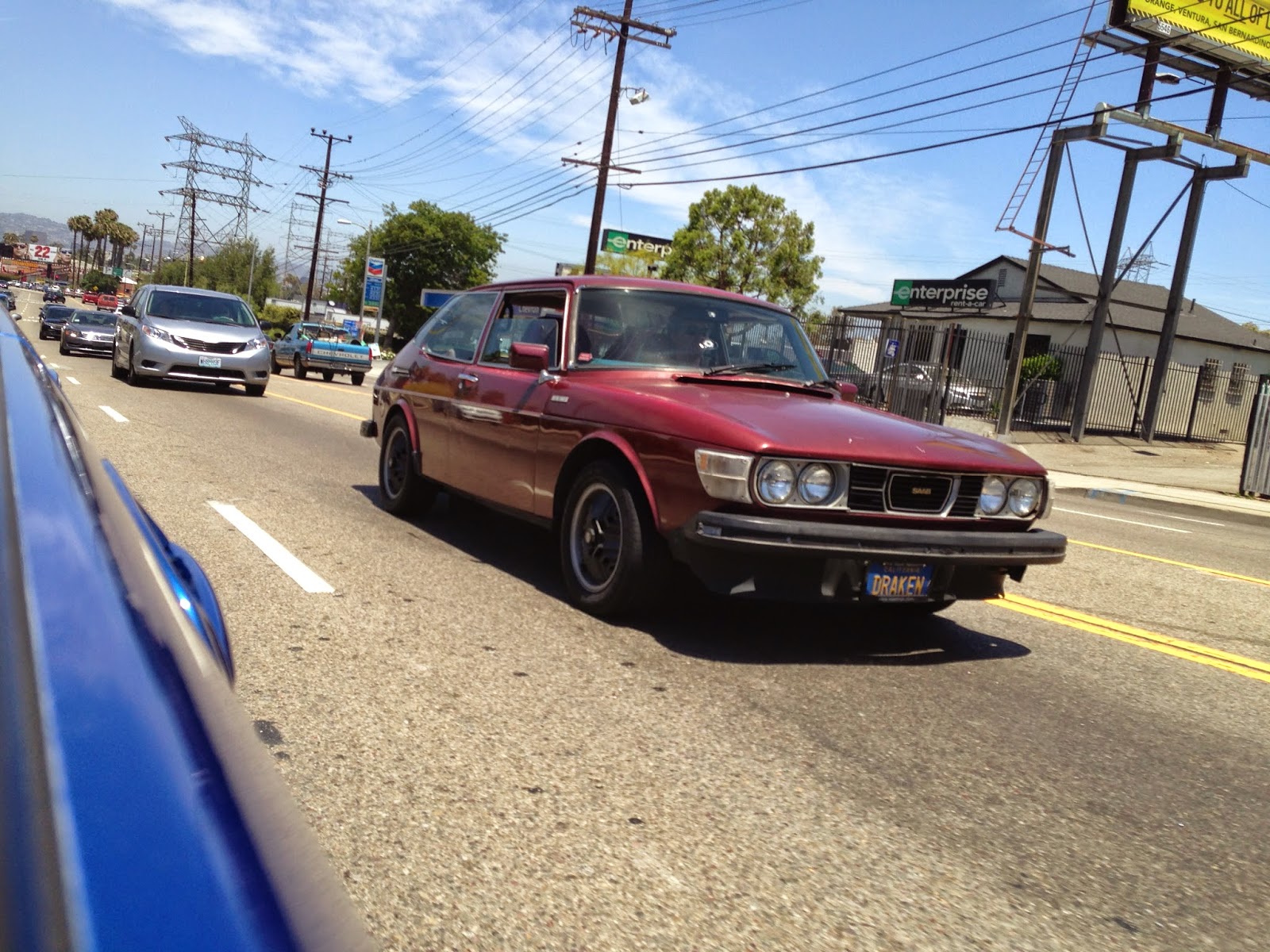 Draken is an EMS version, meaning Electronic Manual Special, which combines electronic fuel injection with manual transmission & steering to make something special.  This is the car that Stig Blomqvist took to victory at the 1977 International Swedish Rally probably because the Saab’s vehicle weight mounted over the front wheels gave it better traction at a time before 4-wheel-drive revolutionized WRC racing.  From the few days I’ve had with Draken I can say that it handles remarkably well for a front drive car from the late 1970s and you hardly notice which wheels are pushing the car around.   According to Archibald Vicar M. Dip writing for UK’s Mass Motorist magazine in 1968, “That the 99 is comfortable, well-made, satisfying to drive and
well-equipped ought to mean that other makers should take heed. The
Bavarians at BMW and Alfa Romeo of Milan also offer small and agile
saloons. I would contend here that Saab has the advantage of them, and
should Saab choose to fit an even more powerful motor, the 99 could be a
class leader in a short space of time.” 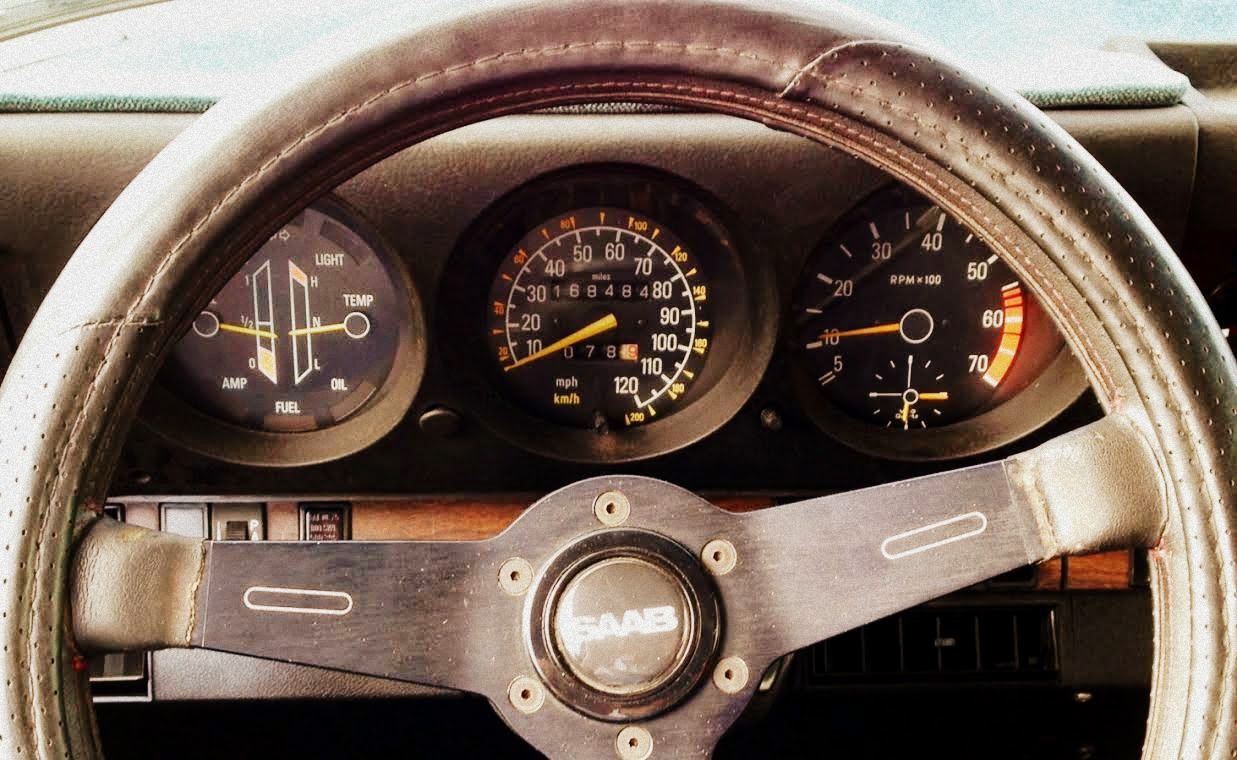 Draken is no ordinary 99 EMS, as it has had two owners since new, the latest one being master Saab mechanic Walter Wong from Right Solution in Culver City, CA.  Walter has owned Draken for the past 15 years, buying it from the original owner and his long time customer John Allen in Marina Del Rey — the Draken plates came with the car when Walter acquired it and then stayed with it. Walter upgraded it as he used it for a daily driver, kid hauler, parts hauler and loaner car for his shop.  The result is a car that has racked up 168k miles on the odometer but wears its original coat of spleen colored paint (thanks Kaibeezy, I’ll never think of it as anything other than spleen!) and dings with honor.  The interior is in surprisingly good condition but the steering wheel could be recovered and some minor cosmetic things need attention.  Draken has also benefited from a close relationship with a master Saab mechanic who has swapped all manner of Saab 900 parts into it for easy servicing.  Upper and lower control arms, brake rotors, hubs, pads, master cylinder, axles, radiator core, and fan are all from the prolific Saab 900 and can be easily found at the local AutoKragOreillyBoys, or online.  Why update all these parts…well…Saab 99 parts are just about obsolete. 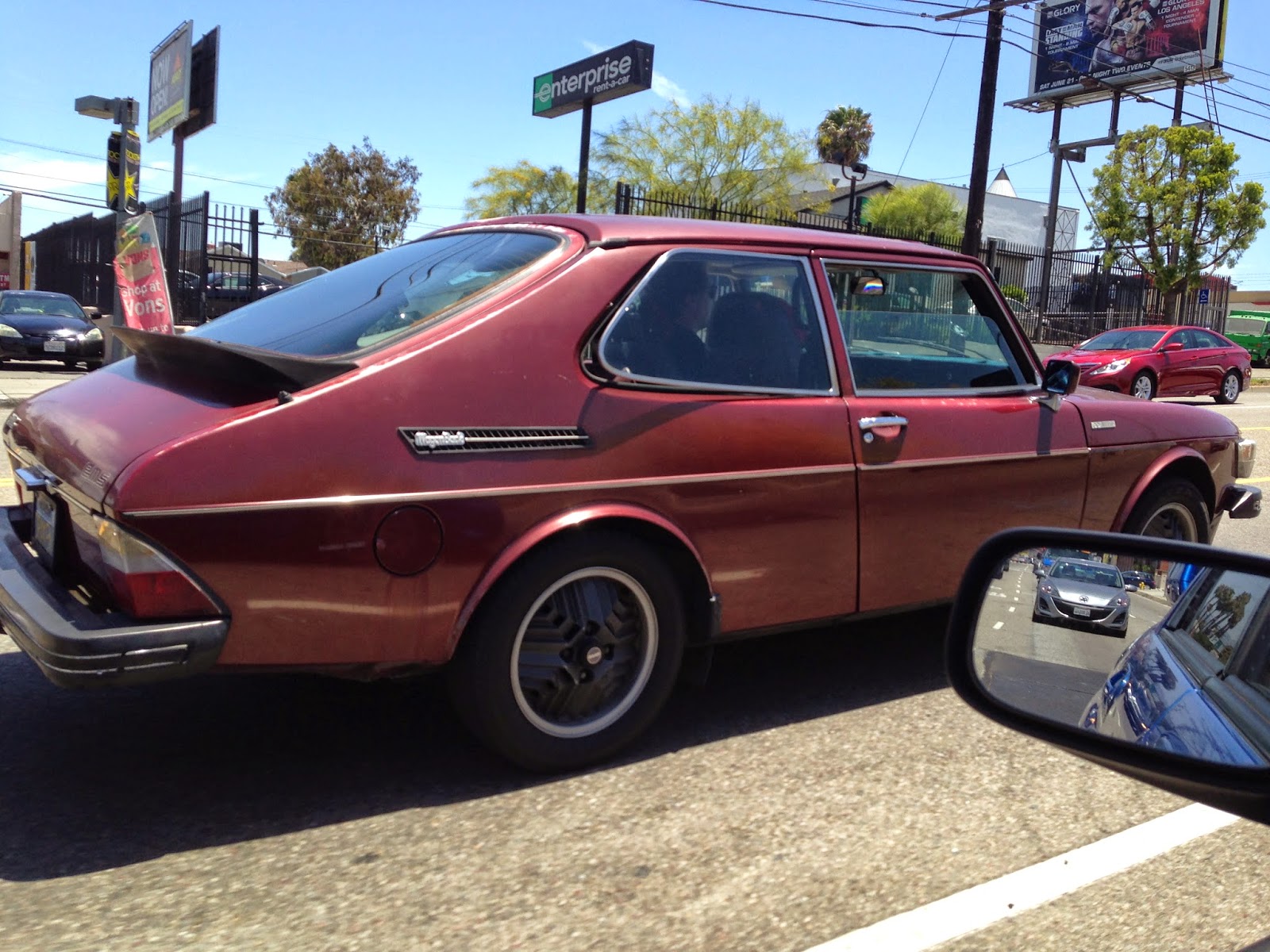 It isn’t just the parts that are obsolete, even finding other 99 enthusiasts on websites seems to be a tricky task.  Of course Draken has a few issues, the turn signals don’t work, horn doesn’t function (actually, I fixed that last night — horn slip ring had slipped from its plastic shroud), gas sloshes from the filler area in turns when tank is full like frat boy spilling Natty Light, and the headlights are hit/miss when they work.  Typically when you have problems like this you turn to your trusty Haynes/Chilton manual (out of print – but I’ve got a used copy on the way) and a quick search on your local forums.  However, the Saab 99 forums are severely lacking on participation, probably because if you own one of these cars you will spend your free time fixing it instead of surfing the web… 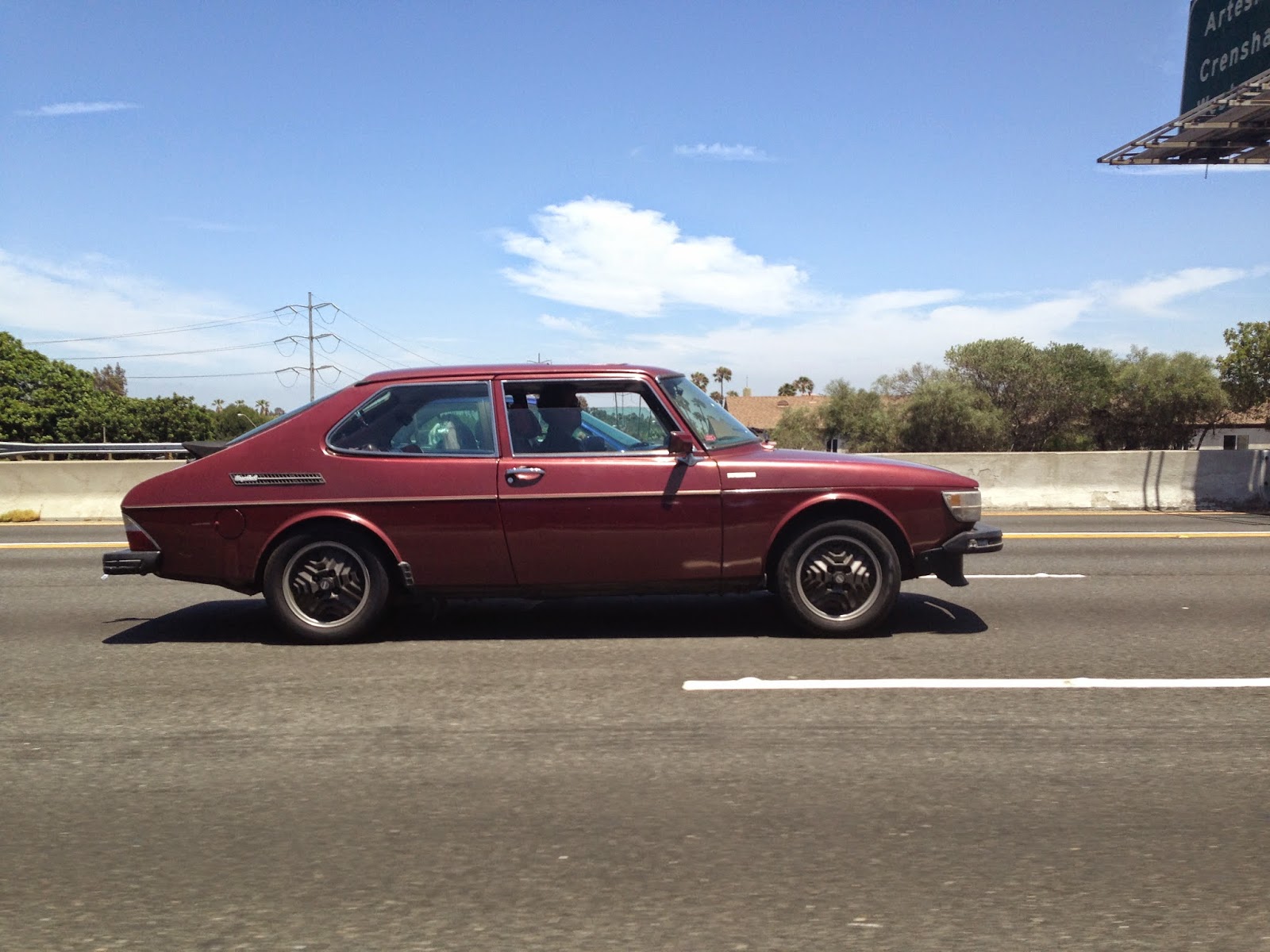 Okay, I’m being overly dramatic, the forum scene isn’t that desolate and there are plenty of people on general Saab forums to point out various things, but I’m starting to understand why I could only find another 5 or 6 Saab 99s in any shape on a nationwide search for comparison when shopping.  Perhaps the 99 is going the way of the dodo bird?  Not if I can have anything to do with it. 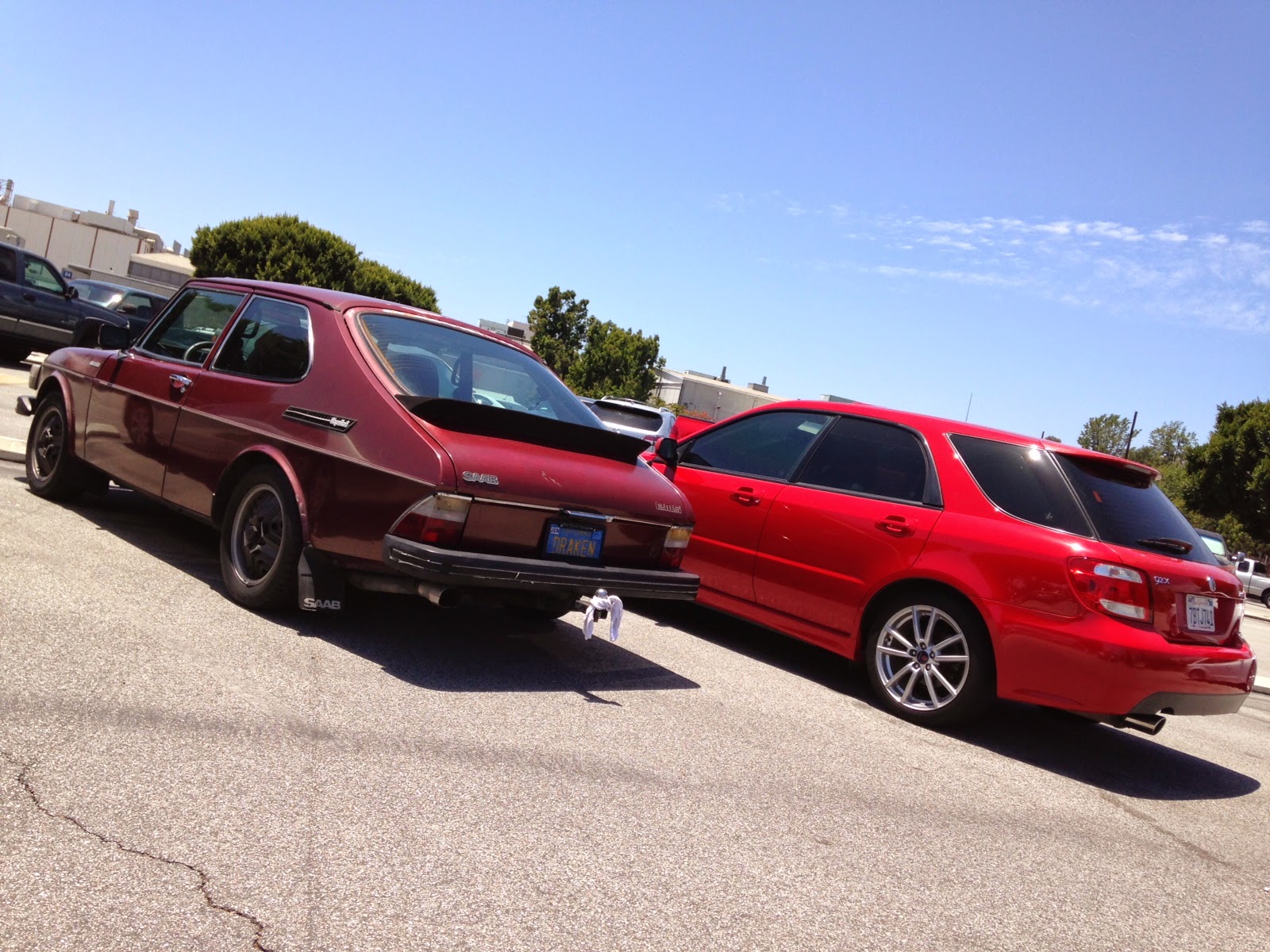 In the end, I picked up a car that is going to test my ability to debug wiring issues with a multimeter and my bare hands.  It could be a horribly huge mistake that my wife will hold over my head for years…or…it could be another example of living the Daily Turismo life.  Only time will tell.