In case you have been living in a cave on the moon, yesterday was the 50th anniversary of the launch of the venerable Ford Mustang.  The first pony car was released at the World’s Fair in Flushing Meadows, NY (the third time that the Big Apple was host to the World’s Fair — what ever happened to the World’s Fair anyway…do they still do those things or has it been replaced by every day on the internet?) on April 17th, 1964 and an astounding 22,000 Mustangs were purchased or ordered on that day.  Fifty years later the classic 2-door sedan with a big hood can be found at any price range from $500 Fox body project to million dollar big block Steve McQueen sneezed on the dash and I covered his spittle in glass Boss 429 collectible.  Nothing says America quite as loudly as the Mustang and everybody has a Mustang story.  What is your Mustang Story? 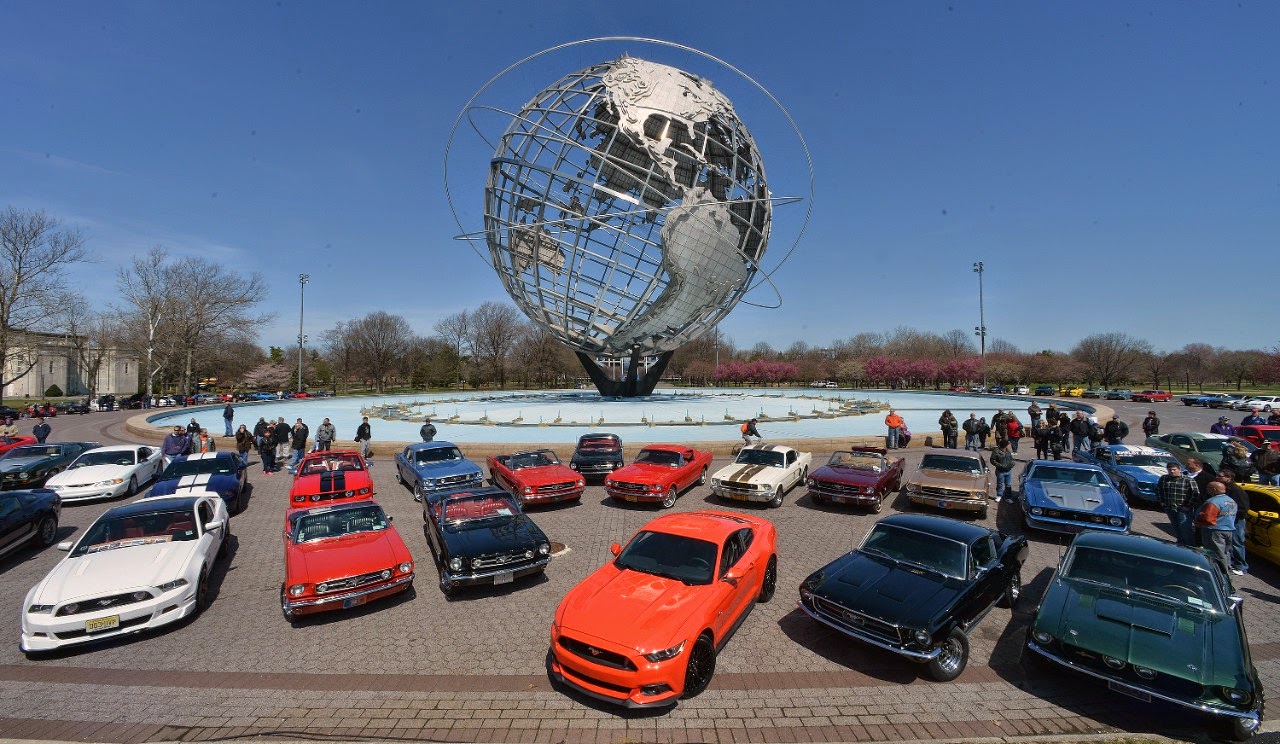 EIC Vince: My own personal experience with the Mustang involves a multi-decade ownership (who owns who right?) of a certain 69 Fastback that has been torn apart, fallen apart, laughed in, cried in, raced in, cruised in, cursed in, shown off, spun off– you name it!  Every time I mention the possibility of selling it to buy an Alfa GTV or something else, the wife says — no way, that car is you!  Now I’ve got a certain little kid who would probably stop speaking to me if I sold the Mustang…but that is a story for another time. 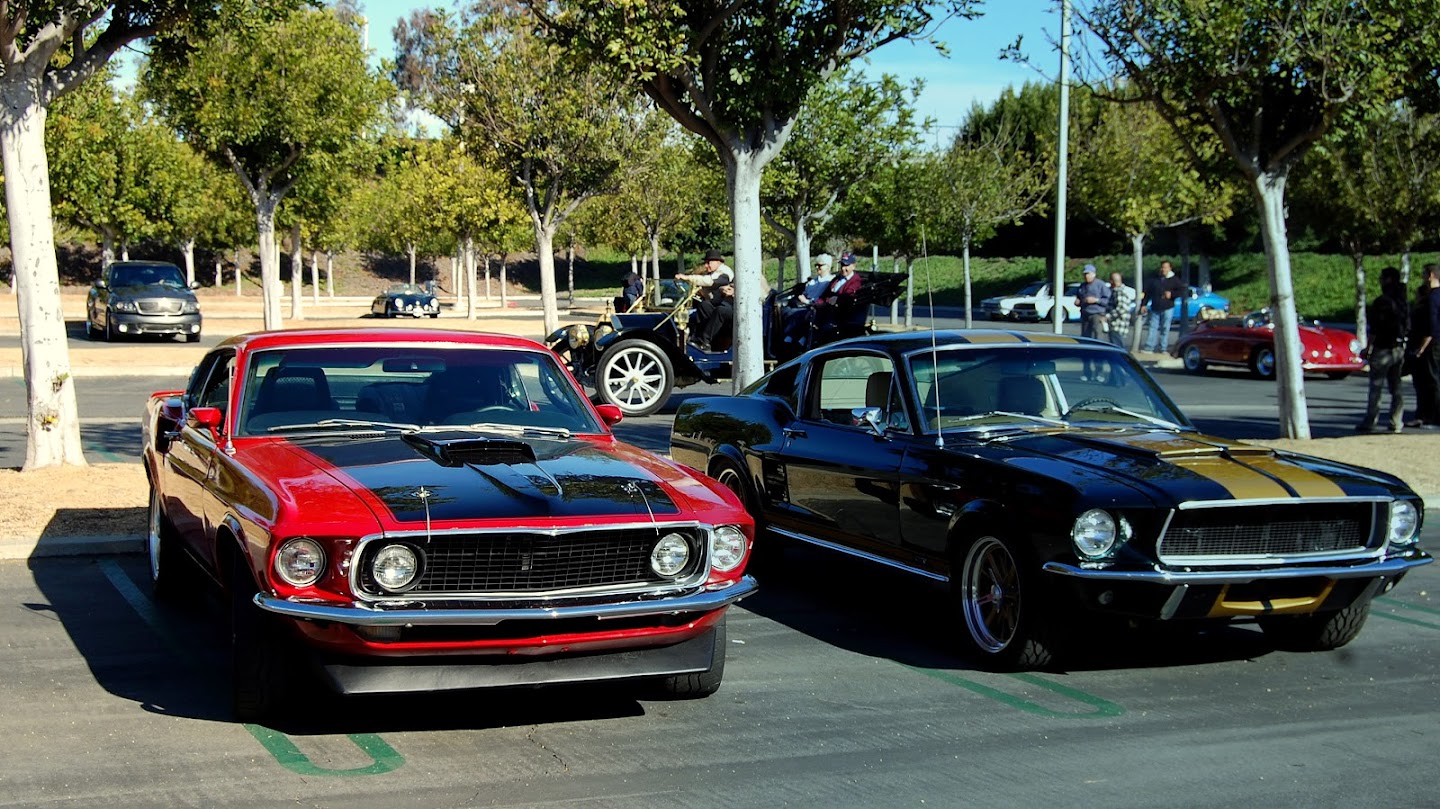 I was a 4th grader when the Mustang was
introduced and remember it as a very exciting time, but gotta confess it
wasn’t the top car on my list at the time. The ’63 Stingray was so
earth shatteringly different that I was more drawn to it, plus by the
1965 model year the Corvette was sporting big block power and I was
still getting over the shock of Route 66 having just been canceled.
However, that all changed dramatically when the movie Bullit premiered.
As the movie got underway, I was far more taken by the Austin Healey
3000 that was parked in front of his building than by his Mustang..
until.. the chase scene. That single screw rear end hopping up and down
while he backed up after overshooting a corner and that best patch I’d
ever seen laid down… his car was a ’68 but I lusted for ’67’s because I
liked their fake brake cooling slots just forward of the rear wheel
wells. 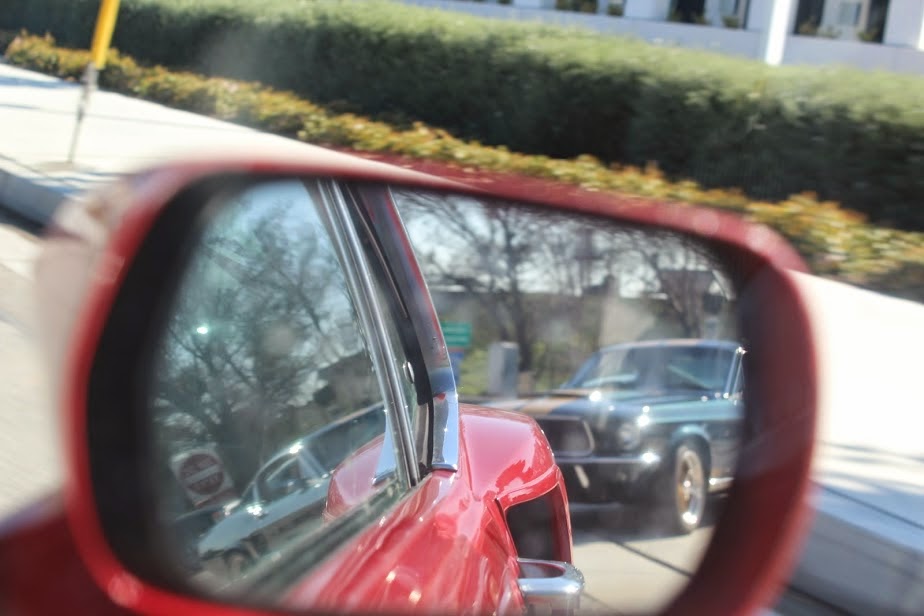 My first Mustang was not my best Mustang. I took a ’68 Mustang Fastback GTA with a bench seat in trade on a ’76 Honda Civic Coupe when the dealer allowed only $50 for the car in trade. Seems he didn’t go for the clutch pedal in a car labeled GTA and the car had now power in first gear. I took it for a test drive and quickly realized it was a 4-spd and not a three speed. It had a J-code 302 and had a twisted coat hanger wire for carberetor linkage. It was also running open headers. I paid $50 for it but didn’t get very far in restoring that one.  I took it apart, but never put it completely back together, but sold it at a modest profit to a friend’s dad. 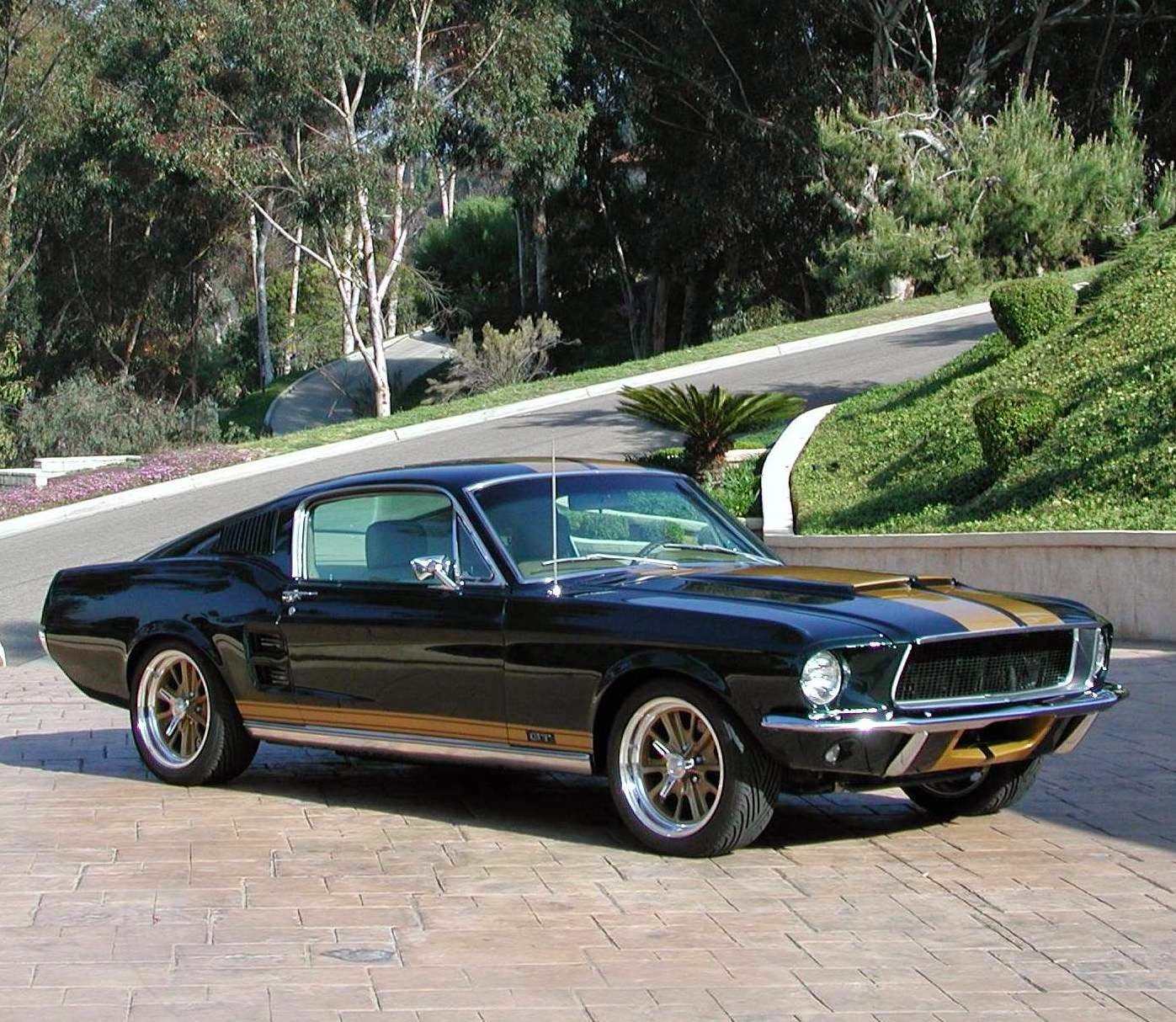 I tried to buy several ’67 390’s over the years but never was able to
close a deal on one. In 1987, I was shopping for a used BMW 635 CSI when the
dealer (who was a friend of mine) pointed to a black 5 speed ’87 Mustang
GT convertible that he’d just bought at auction. Unlike 1964, when Route 66 was
cancelled, the TV series Moonlighting had just made a star of the BMW so I was not instantly swayed.  I obliged him by driving
the Mustang and discovered that I had to have it.  It was a lot more visceral than the BMW and I loved the
way it sounded.  I bought the car on a friday afternoon and autocrossed it
the next morning.  I put a lot of miles on that car and set my personal best for the 1/2 Cannonball (Oklahoma City to Boston and
back)… oh, the speeding tickets that I earned by I managed to avoid that car! 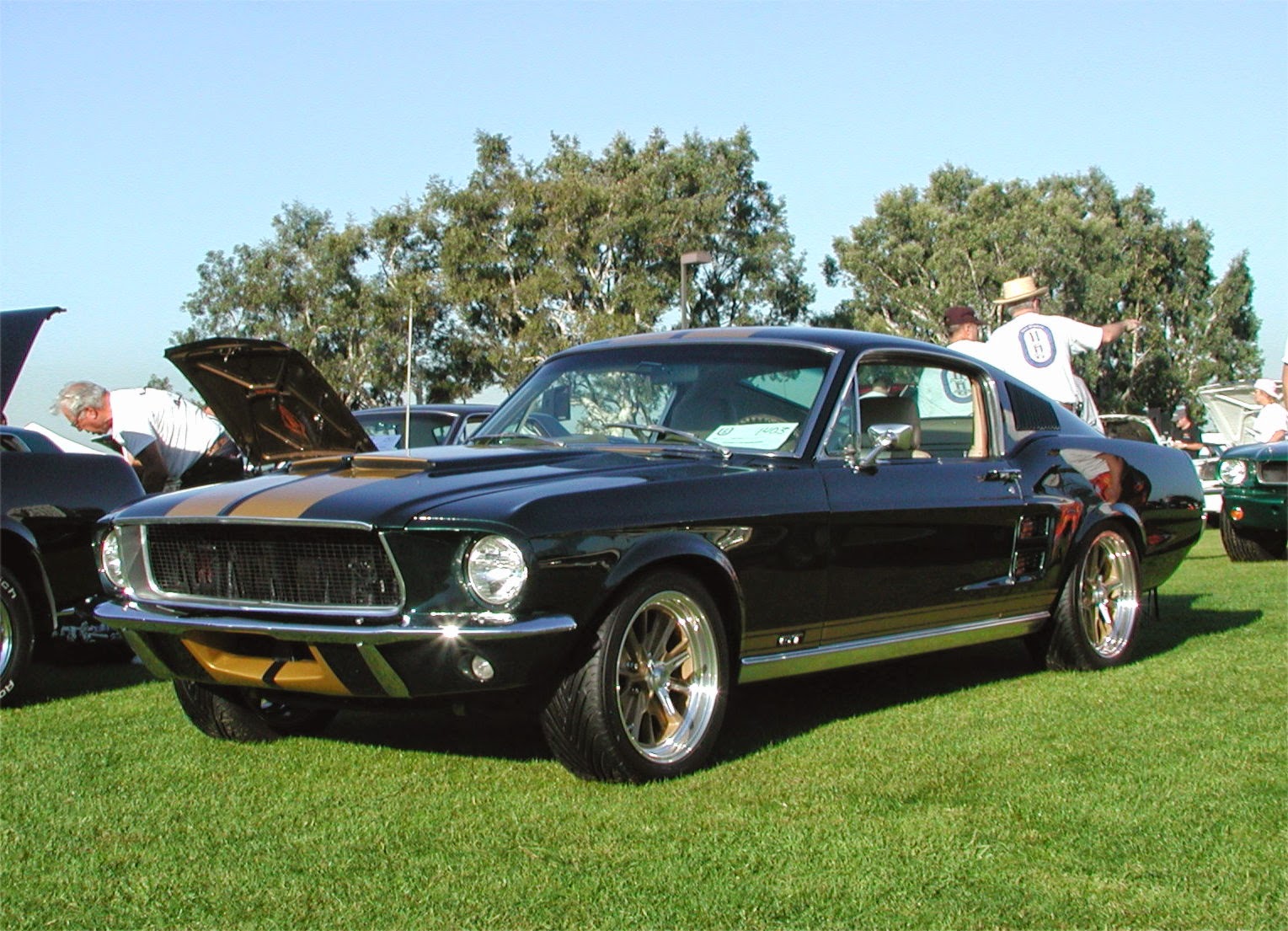 I sold the ’87 GT convertible in OKC on my move to Southern California, where I arrived without a car.  As luck would have it, my new brother-in-law was selling his ’73 Mach 1 so I bought it for my Daily Turismo.  I drove it for about a year, painted it in the garage and made a little money on it but was never impressed with its barge like maneuvering. The next few years were a blur of crotch rocket motorcycles which are still faster per dollar than most cars, but when sanity (and too many close calls) brought me back to four wheelers, my search for a ’67 390 Fastback resumed. The closest I got was a car with no options, a motor that sounded like it had a rod knock and no brakes. An hour or so after turning that car down, I was tipped to a very straight ’67 Fastback A-Code in my least favorite color Lime Gold.  The the car ran strong, had a four speed, power disc brakes, a/c that blew cold and was “all there”. 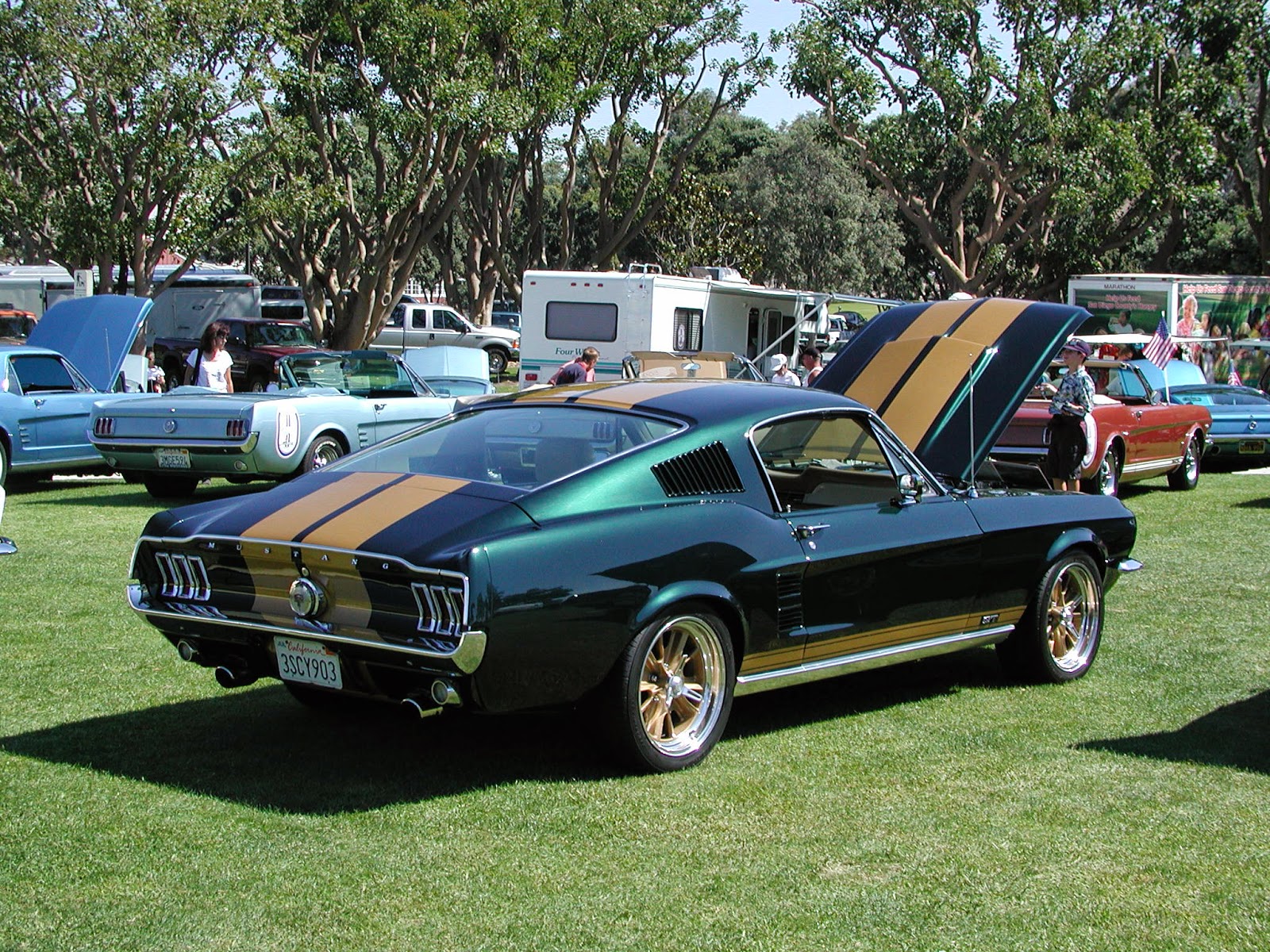 Over the next three years I cut it apart, added lots of custom parts, tore it down, had it painted, reassembled it and made a bunch of great friends along the way. I ended up with one of the first truly restomodded Mustangs around.  Salvaged a Mustang II front end from a Pinto Wagon to get manual rack and pinion steering, added 4-wheel disc brakes, a Tremec 5 spd, tilt steering, cruise control, electric windows and a Ford SVO crate engine. It was finished right after Gone in 60 Seconds came out and I already had sourced a set of PS Wheels which set the car the way I like it. I drove it hard for the two years or so, managed to enter it into a couple of shows where it took several first places and was lucky enough to have Jim Smart with Mustang Monthly write it up. We moved to Michigan where it only saw duty when there wasn’t salt on the road.  At 14 years, I owned that car longer than any car I’ve ever owned.  I finally sold it to a really good friend who was told by DT’s  E-i-C “either you buy it, or I’ll buy it and flip it for $1.50 on the dollar!”  I used some of those proceeds to return our family to Southern California where I’m sure another Mustang will be in the cards for me on down the line. 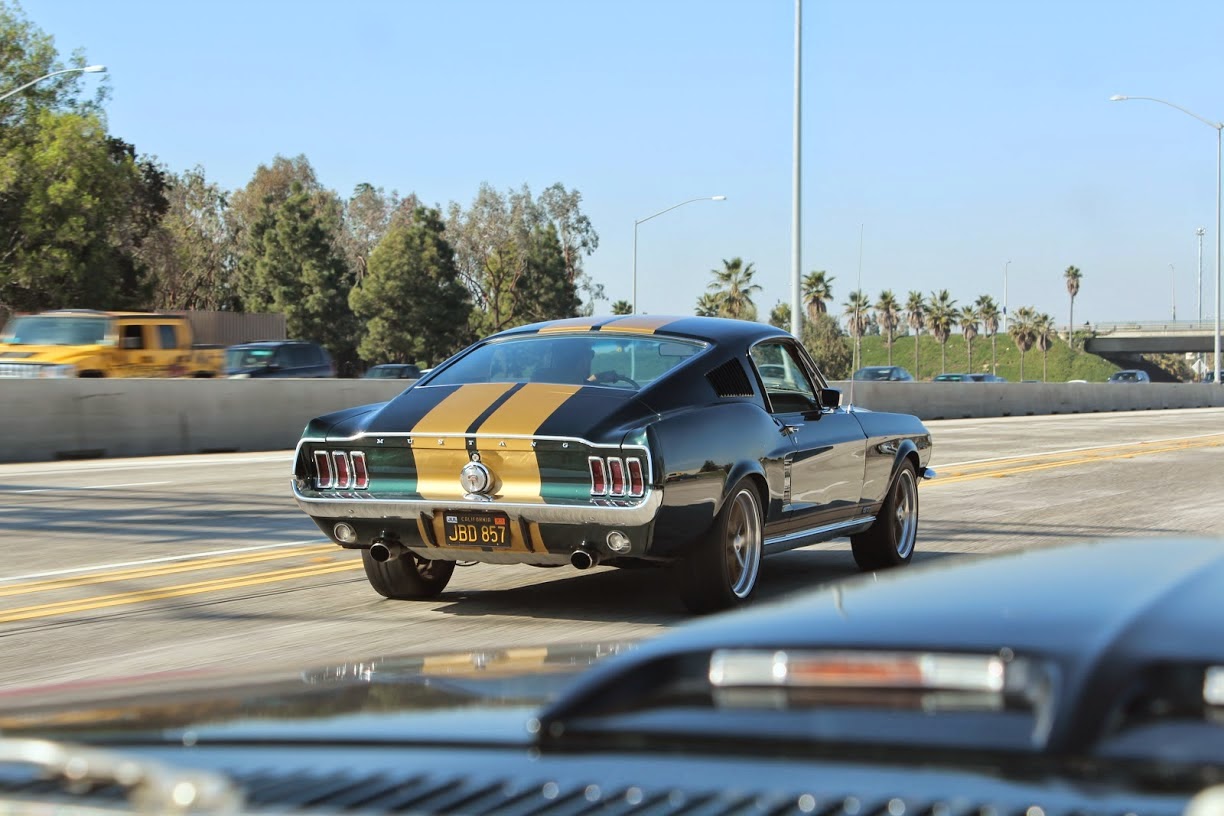 What is your Mustang Story?  Comments below.