Anyone remotely familiar with automobiles will know the name, man & legend that is Carroll Shelby without any fancy introductions.  The world mourned his passing in May of 2012 and the First Annual Carroll Shelby Tribute and Car Show was put on by the LASAAC and the Carroll Shelby Foundation on May 11th, 2013.  We don’t need alternative reasons to wander through rows of vintage Shelby machines, but the donation to kids disease research and automotive education scholarships through CSF is certainly a bonus. 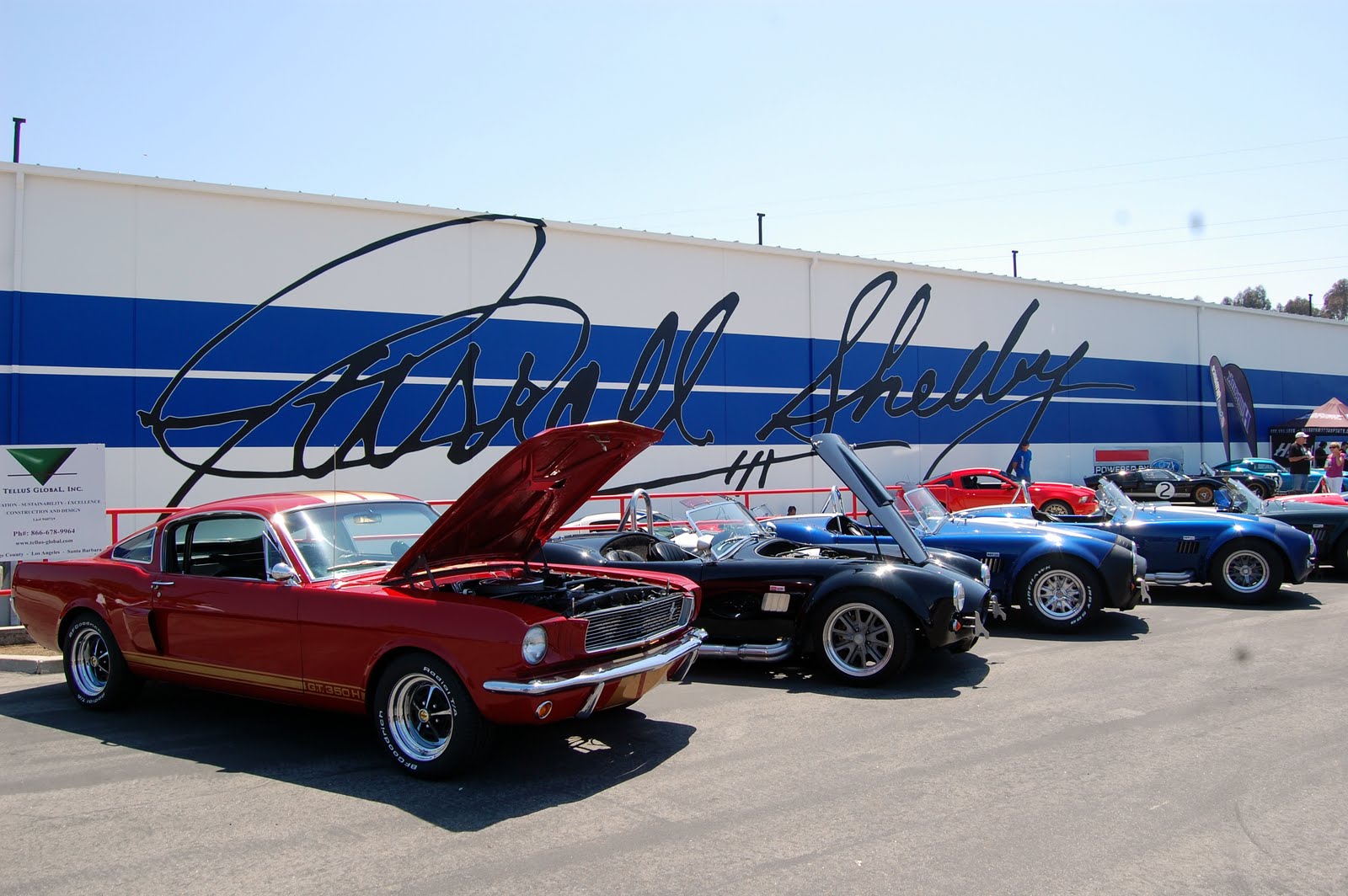 The Shelby Tribute and Car Show was held in the parking lot of Carroll Shelby International Inc headquarters located in sunny Gardena, CA.  CSI Inc says its mission statement is “To create high performance machines and products that connect human beings to their passion” and this Tribute show couldn’t have been a better testament to that goal.  Follow the Daily Turismo as we walk through Carroll Shelby’s legacy with some choice photos of his greatest accomplishments. 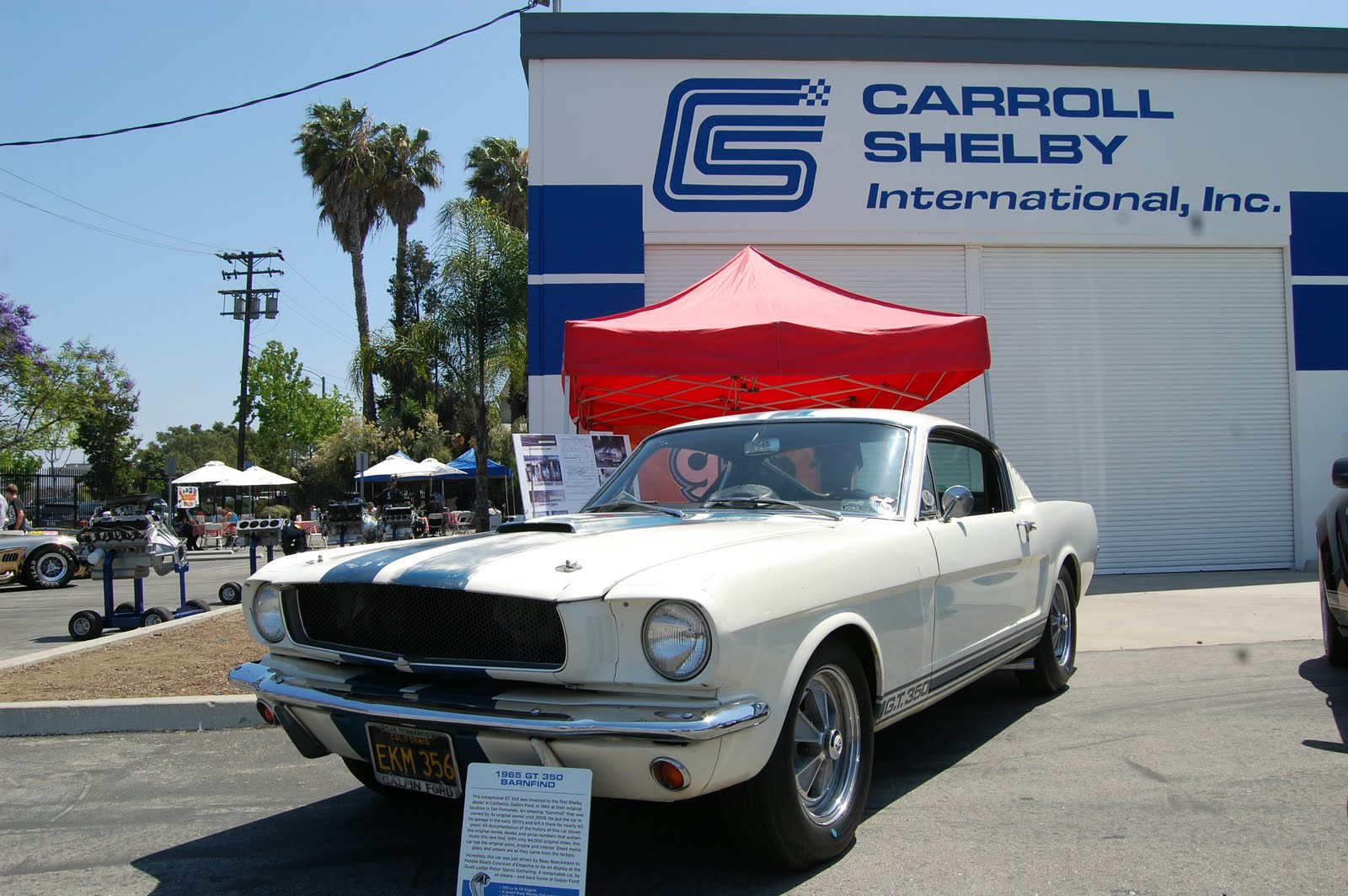 Born on January 11, 1923 Carroll Shelby suffered heart problems as a child but was declared healthy by age 14.  During WWII he was a pilot instructor in the Army Air Corps, later became a chicken farmer, but his love of automobiles could not be extinguished and he started SCCA automobile racing in 1952.  He was quite successful from the start and attracted the attention of the Aston Martin factory team and began a short career in sports car racing that even netted him a few stints in a Forumla 1 car.  Unfortunately his childhood heart problems returned and he was forced from the racing seat into the front office…a change that he met with a smile on his cowboy hat covered head. 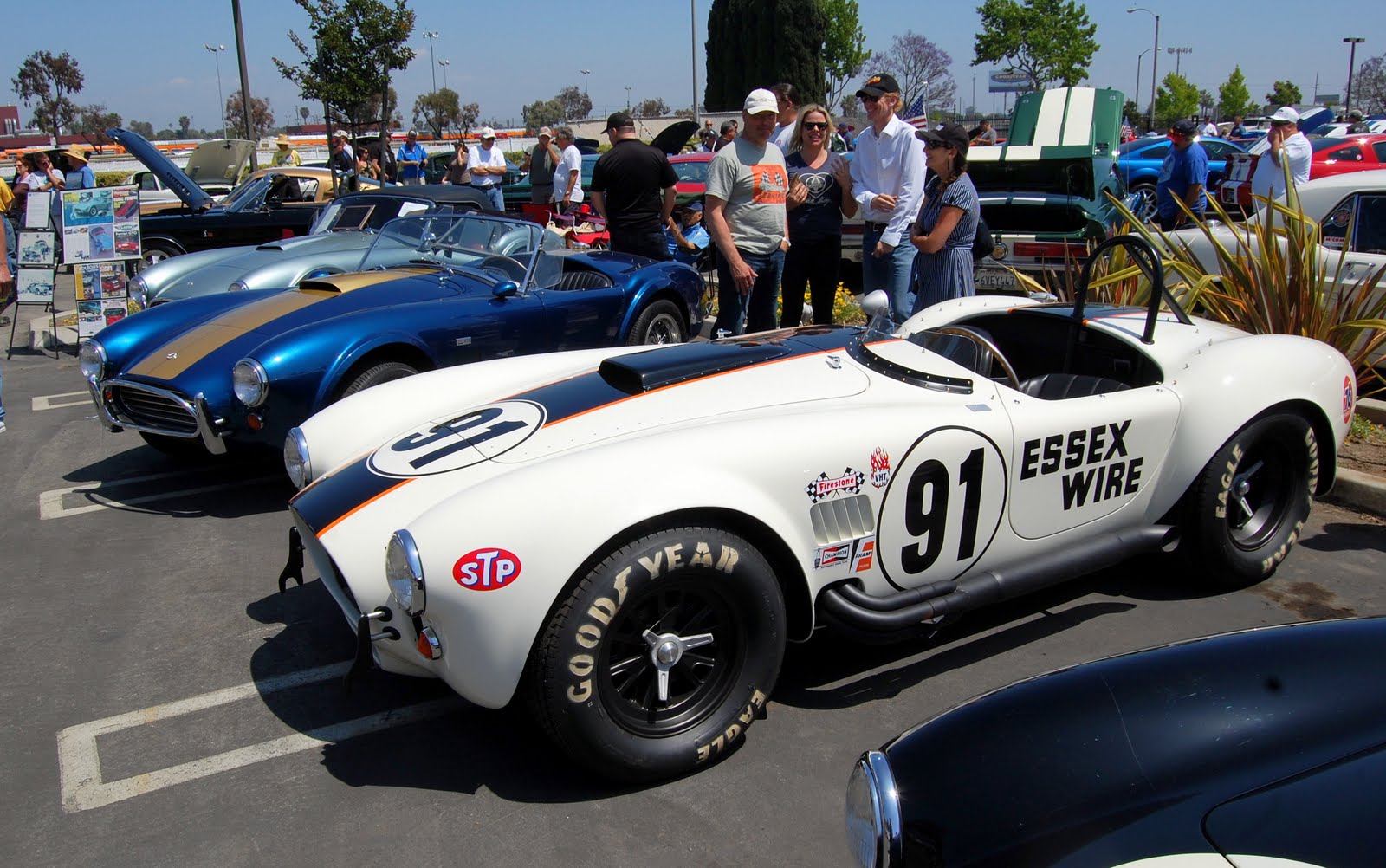 Shelby formed Carroll Shelby Sports cars in Dallas, TX in 1957, and after a failed attempt at gaining a foothold in the Harley Earl and Ed Cole run General Motors, Shelby first found an unlikely opportunity with AC Cars of England.  It took some convincing to get AC Cars and Ford to agree to his crazy
plan, but in 1962 Shelby shoved a 260 cubic inch Ford small block V8
into the small AC chassis, enlisting friend Dean Moon to test drive the
Frankenstein’s monster on the public streets of Southern California.  A
few months later production began at Shelby’s production facilities in
Venice, CA. 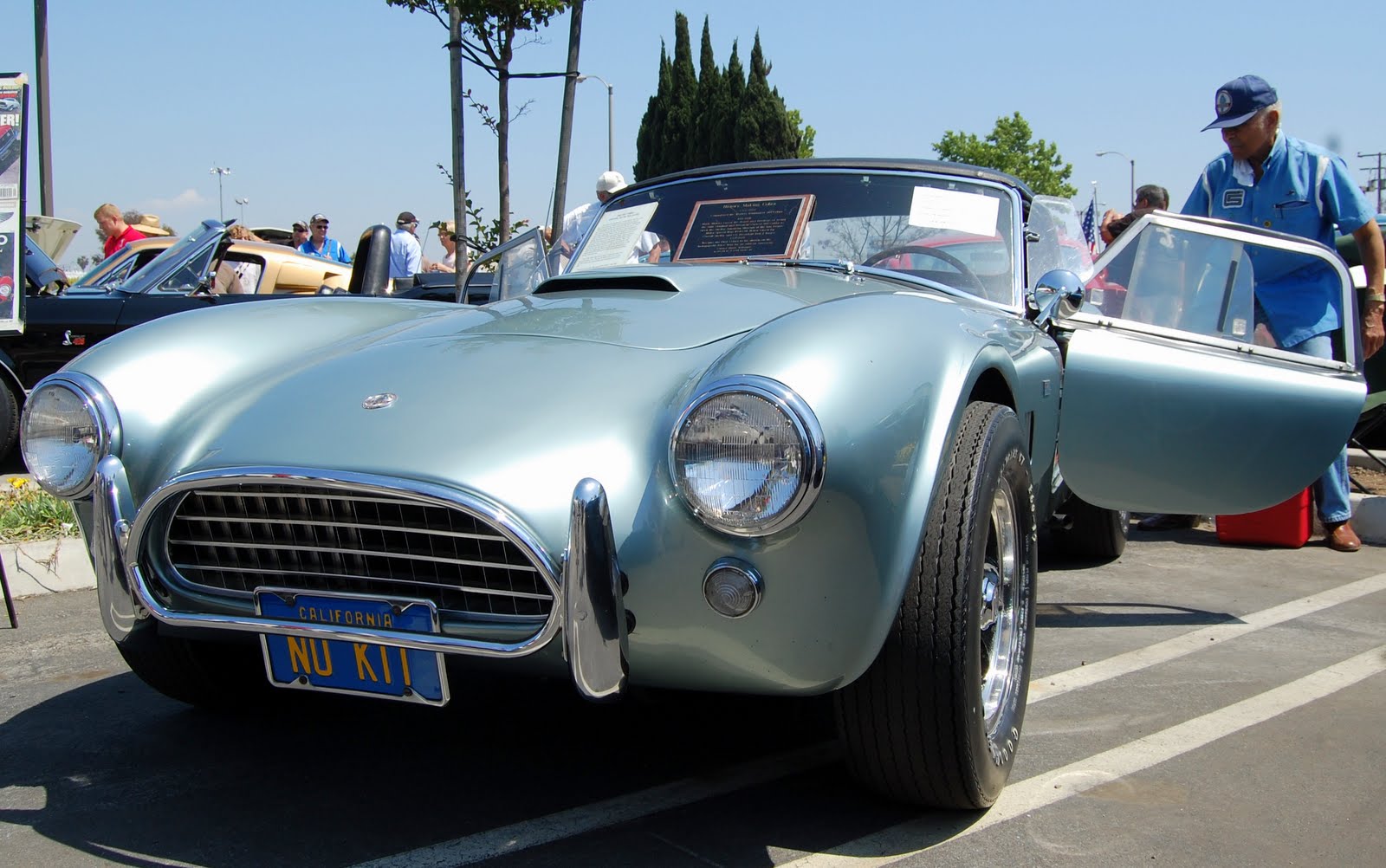 This custom blue plate “NO KIT” (California never issue personalized black plates) wearing AC Cobra belongs to Hank Williams (no, sorry, not the country singer or his kids/grandkids) who purchased it new in 1965 and has put more than 140,000 road and track miles on this beauty.  What is remarkable is that it shows really well with its original paint, interior, 289 cubic inch V8, American Racing Mag wheels and hardtop. 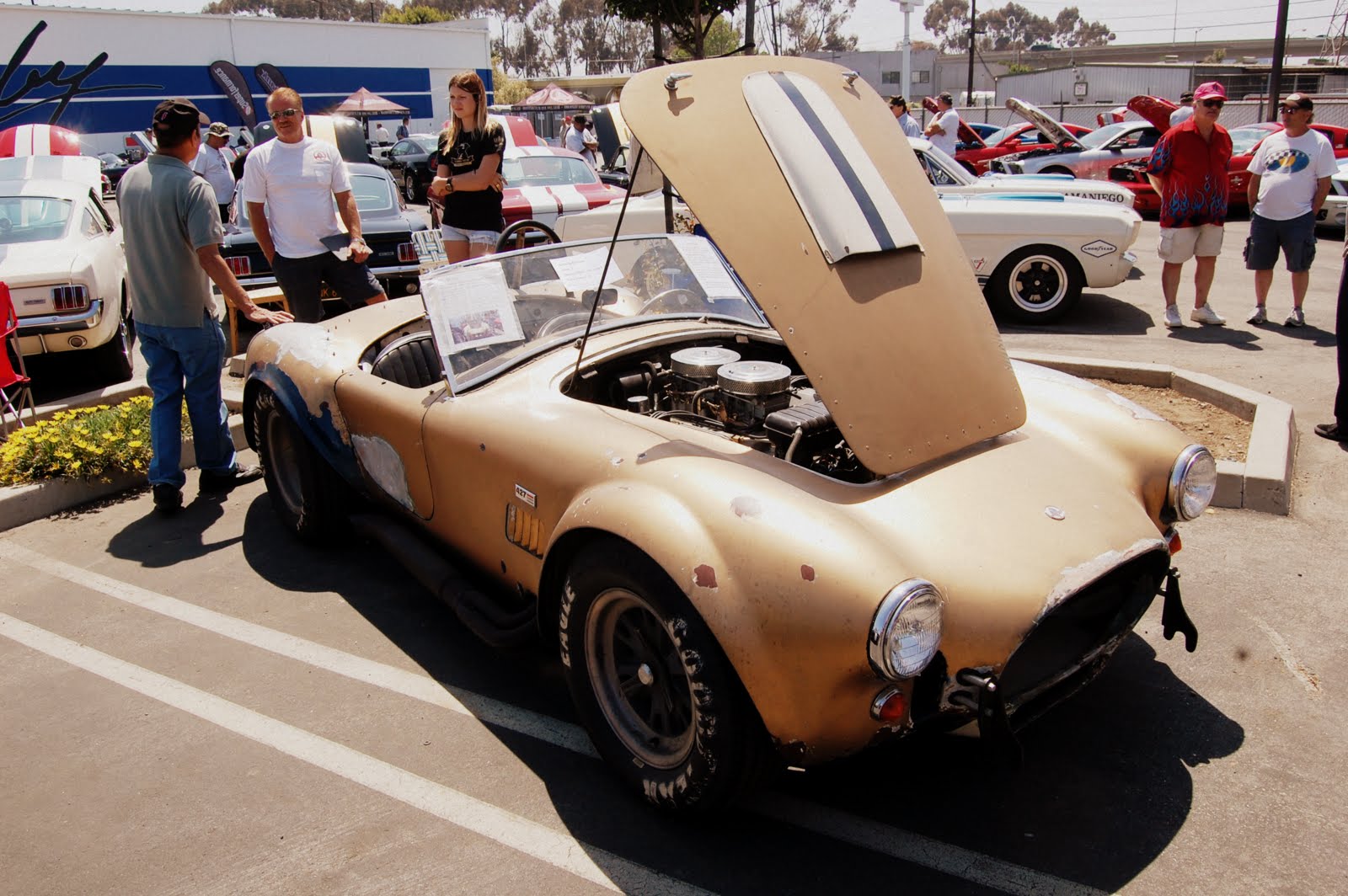 The AC Cobra started out with a 260 horsepower and 260 ft-lbs of torque – more than enough to give the 2000 lb roadster stunning performance for its time…but soon the 425 horsepower 427 cubic inch V8 was shoved between the fenders to show, Corvettes, Ferraris and light aircraft who was boss. 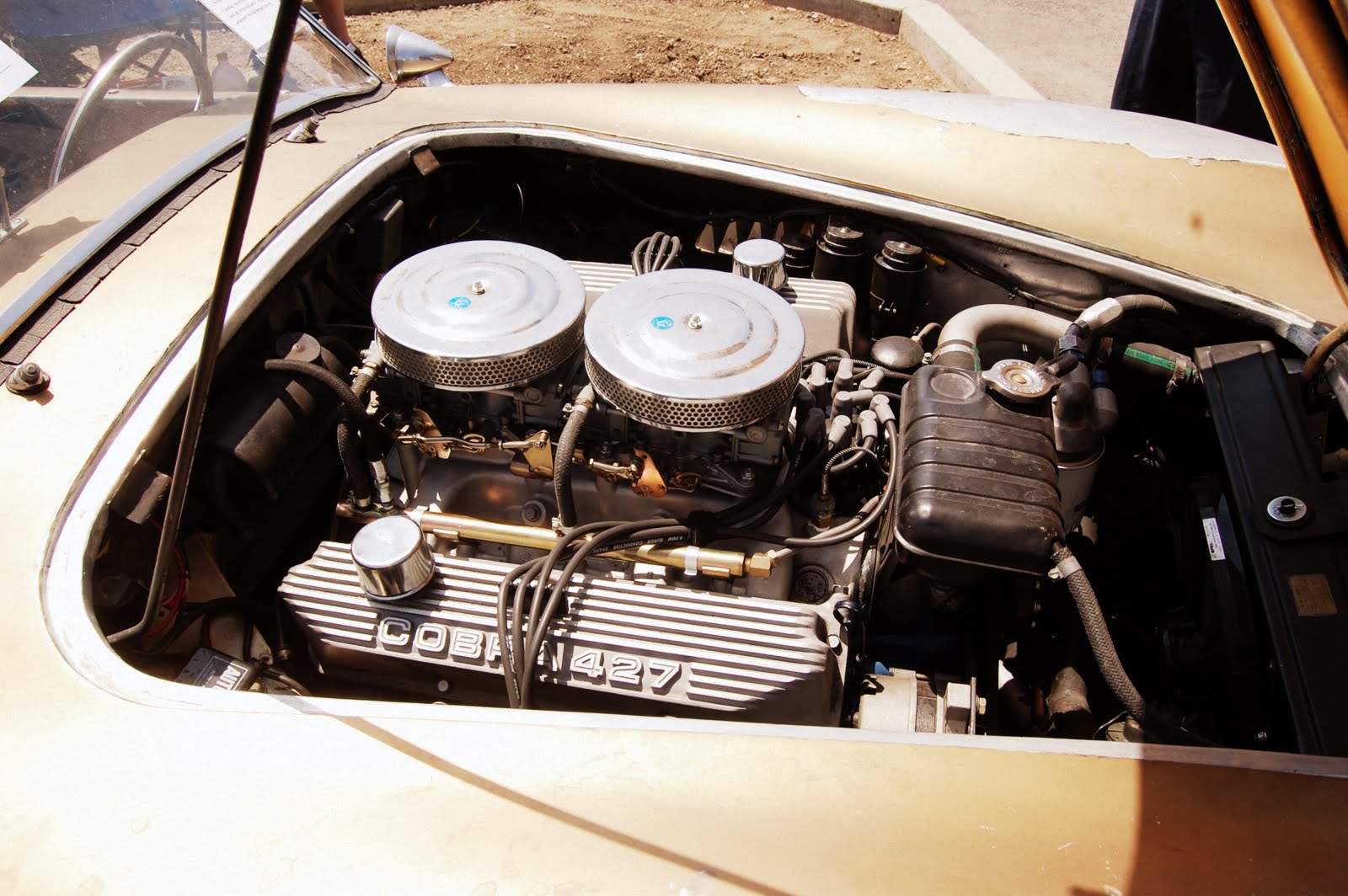 This Hertz Gold colored 1965 Shelby Cobra (serial number CSX3047) is an un-restored barn find, one of 30 original 427 SC equipped Cobras from 1965 and certainly the most ratty looking car at the show. 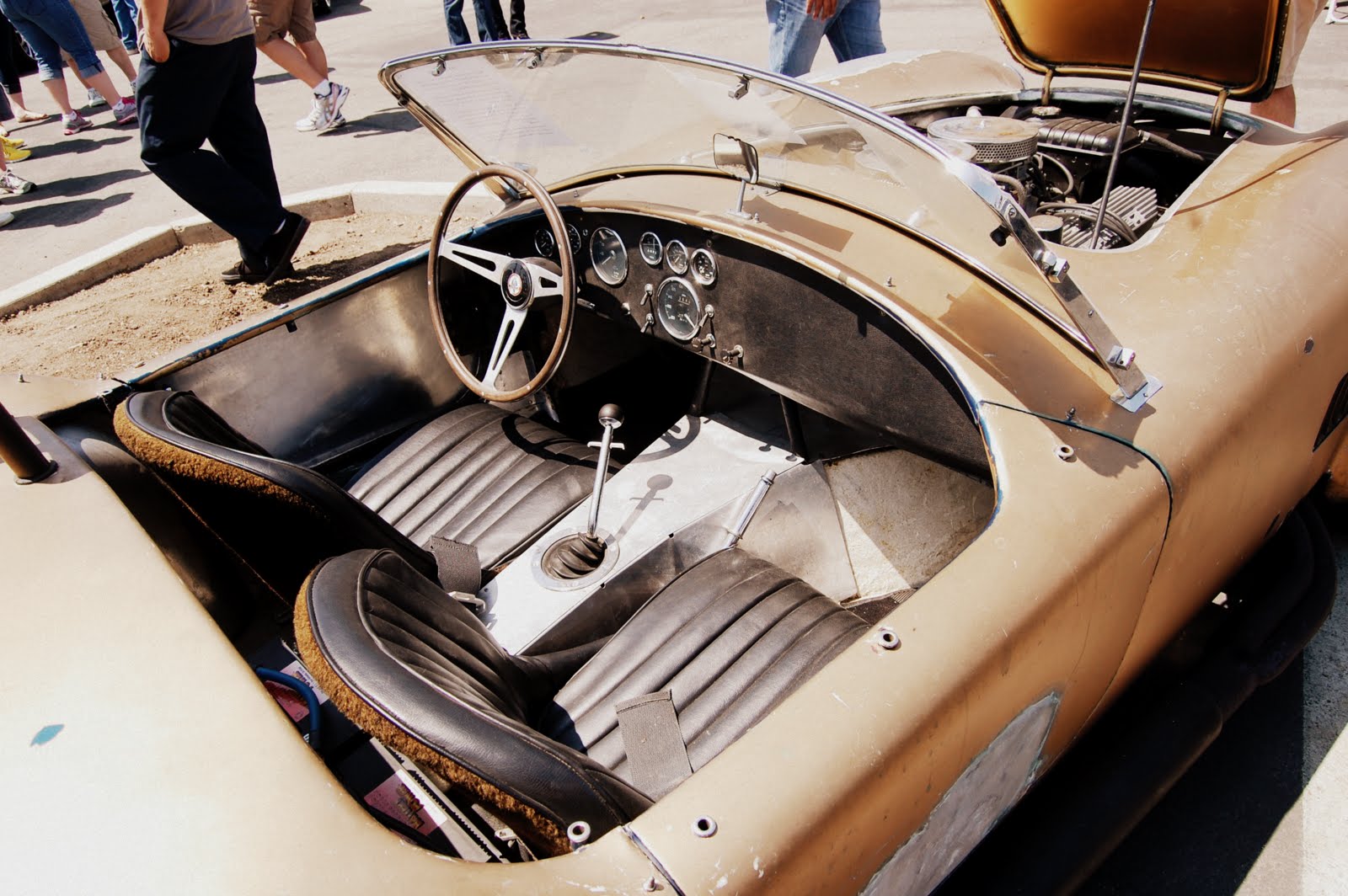 Ratty or not, it attracted a crowd all day and was driven home by its owner with a cacophonous rattle of unrestored awesome.  Three thumbs up from us for an unrestored street version of the cars that showed Ferrari their tailpipes at LeMans in the mid 60s. 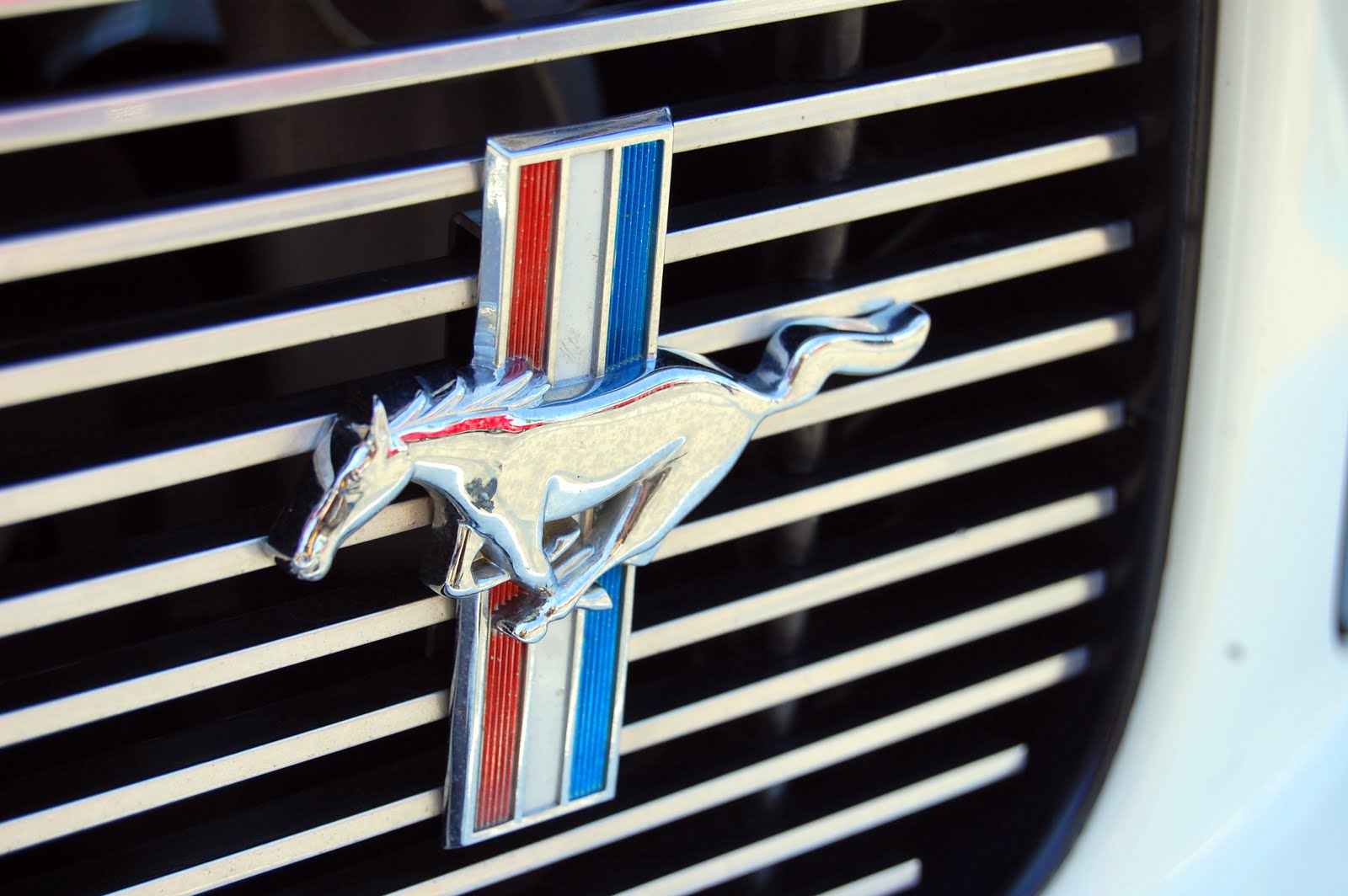 At some point in time Carroll Shelby’s name become synonymous with performance Mustangs, probably because Ford asked him to create a performance street version of the uber-popular 2+2 Mustang Fastback in 1965. 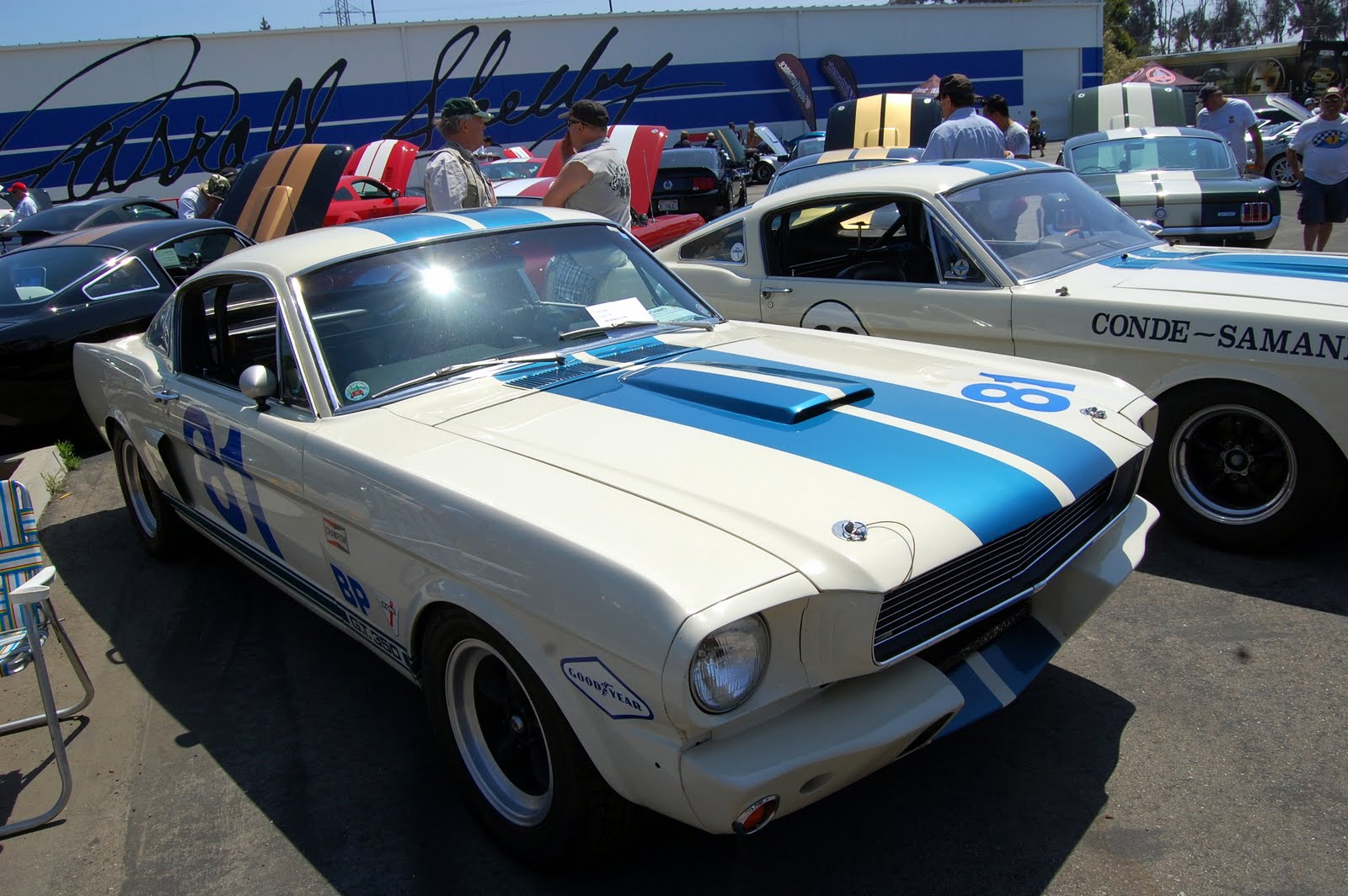 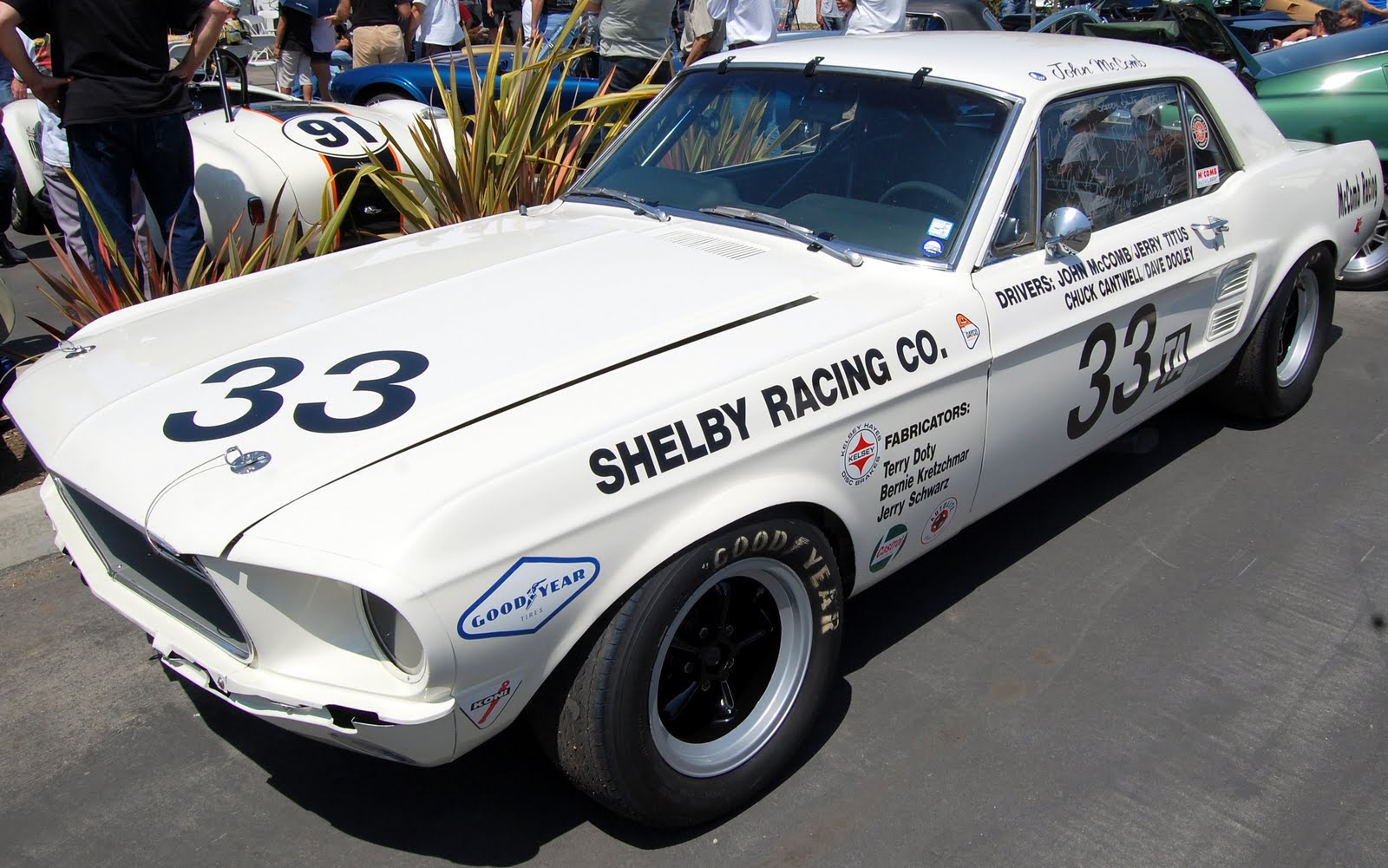 Shelby ran a successful racing driver’s school and some of the cars that weren’t rolled into a ball at the local race track have been located and restored for the ultimate Mustang coupe. 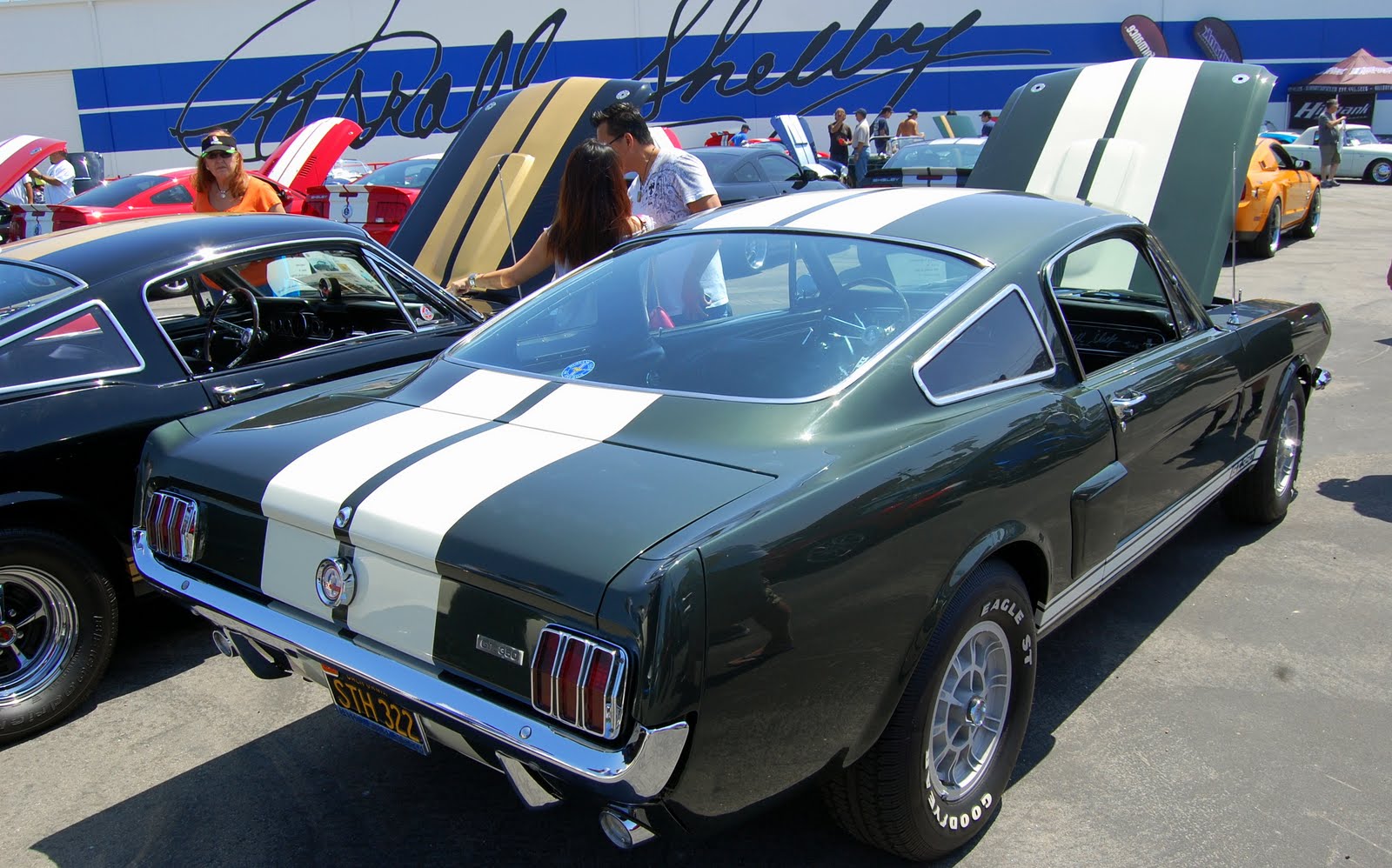 Early Shelby Mustangs can be identified by the glass fastback C-pillar window in the place of the stock louvered vent…although many fake-Cobras have been created by Fastback owners around the world. 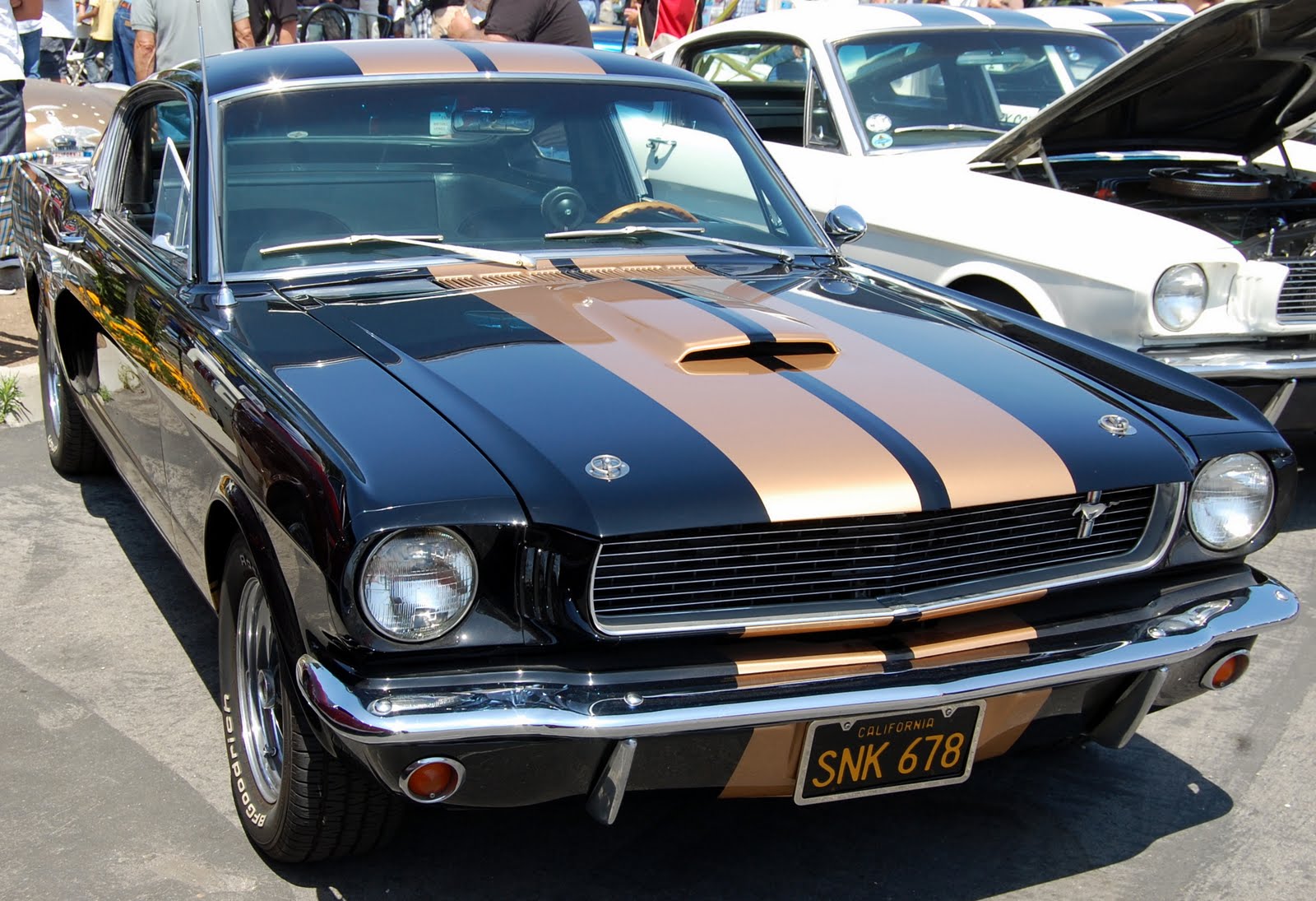 One of the cooler things Shelby did was to create an arrangement with Hertz Rental Car company to rent Shelby Mustangs to the public.  Chaos ensued and there are all kinds of rumors of rental cars being used for SCCA races and new rental car engines being swapped for worn out versions…what would probably be the case today if anyone other than a fleet purchased a Chrysler 200. 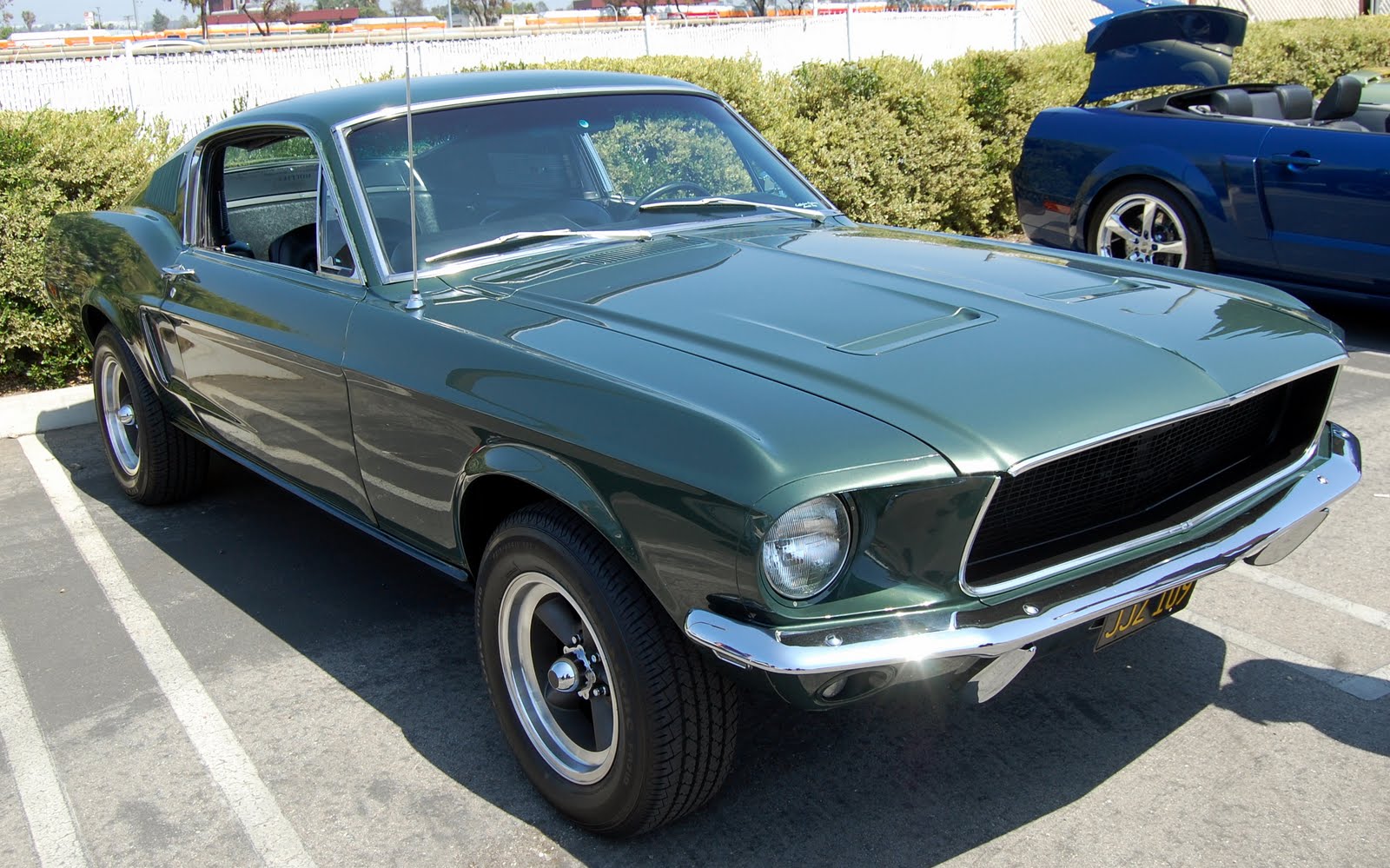 Not exactly Shelby related, but what Mustang car show would be complete without the requisite Bullitt movie mustang clone?  This one was extremely well executed. 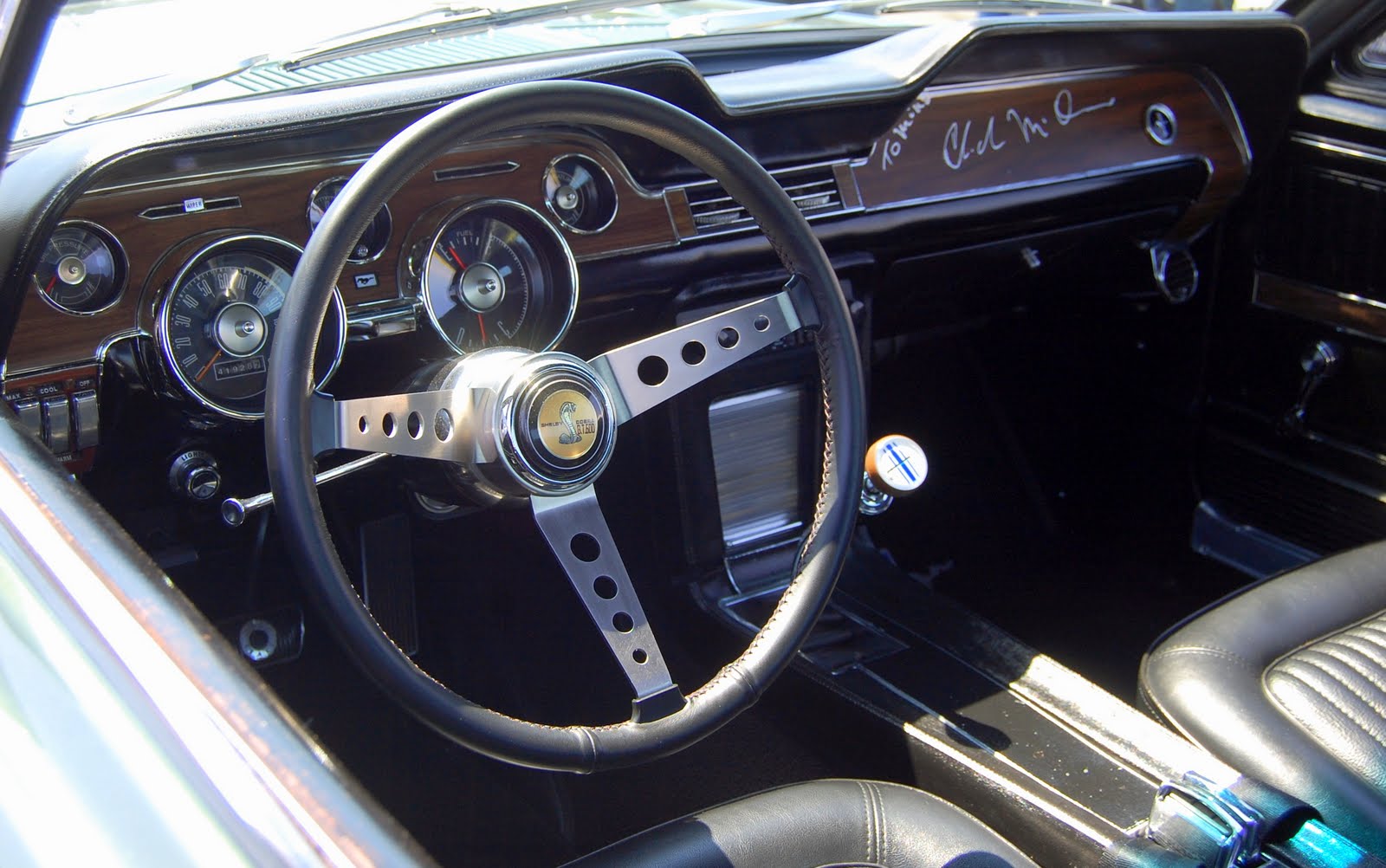 First glance inside this Bullitt mustang looks like Carroll Shelby has autographed the glove box (as 99% of the Mustangs in the show), but upon closer inspection it looks to be Chadwick Steven “Chad” McQueen. 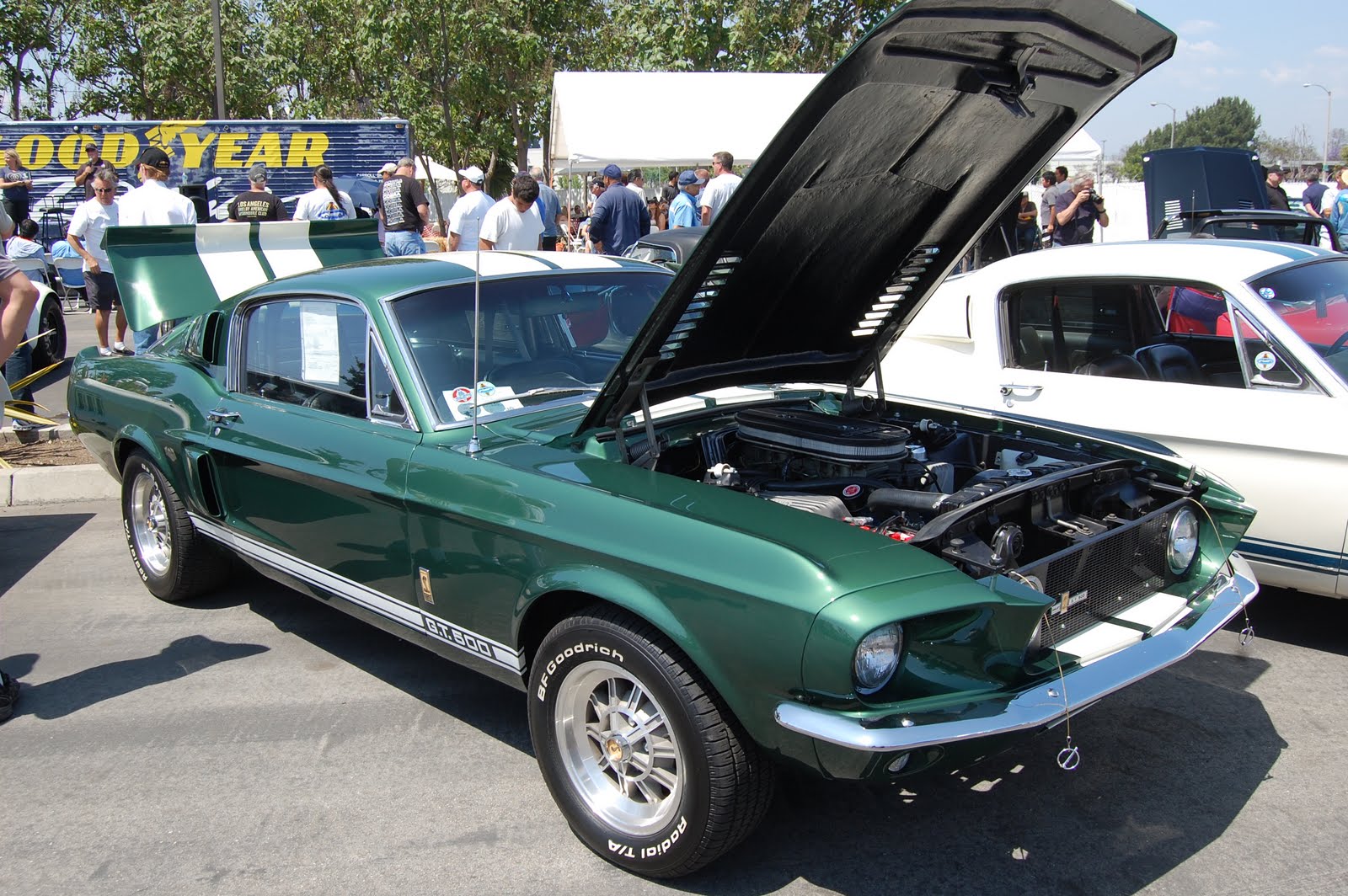 Shelby Mustangs continued into the first minor restyle in 1967/68 and became a bit more extroverted in character with all sorts of scoops/ducts and stripes. 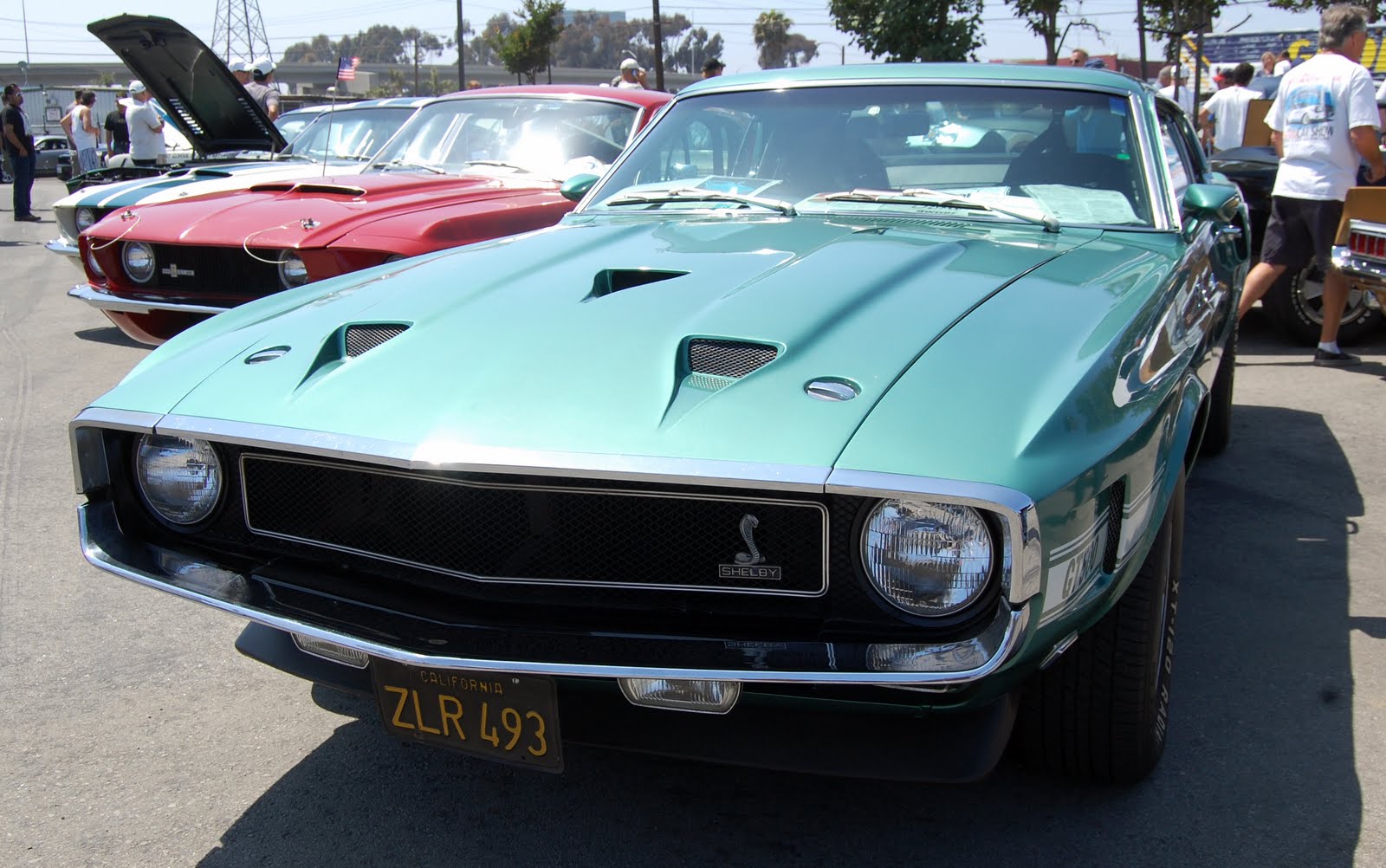 The 1969 Mustang represented a major change from previous years and the Shelby version was even more radical, with unique fenders, grill, headlamps, bumper, and NACA duct covered hood.  1969 -70 (technically 1970 Shelby Mustangs were just 1969 models that hadn’t sold in 69) was when Ford decided to bring its performance versions back in house and away from Shelby. 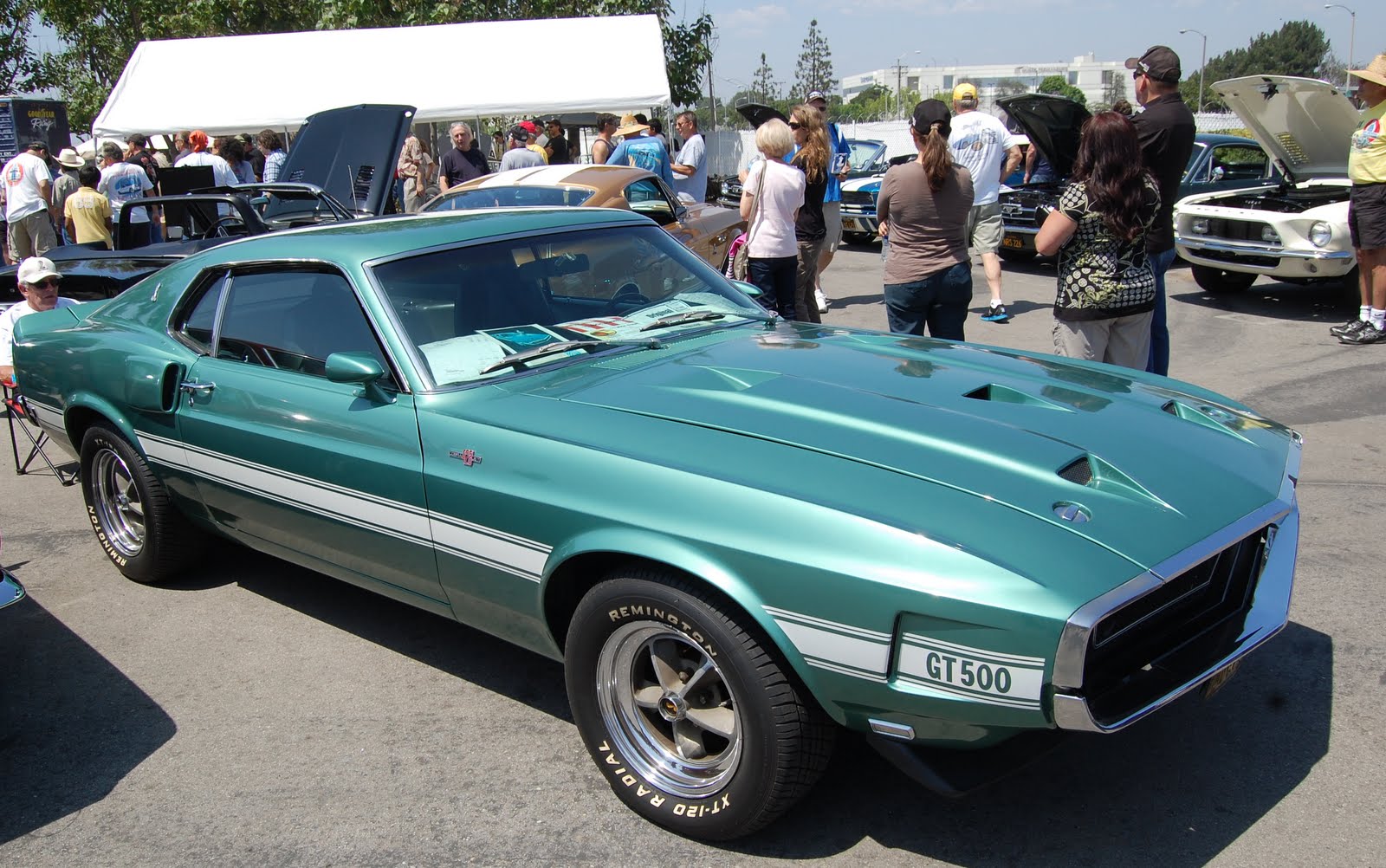 The 1969 model represented the last of Ford/Shelby collaboration until 2007 with the triumphant return of the Shelby name on the Mustang. The 1969 Shelby Mustang didn’t sell well when new and today doesn’t command the higher prices of the early cars. They’re kind of the Shelbyville redneck cousins to the star ‘Simpson kids’ even though they’re arguably the best
looking Shelby and also unique looking….but…they’re considered more
Ford-ified Shelby’s than Shelby-fied Fords.  Ford took Shelby’s ideas and watered them down, instead of Shelby taking Fords and beefing them up….whatever, we dig the fact that this was the only one at the show. 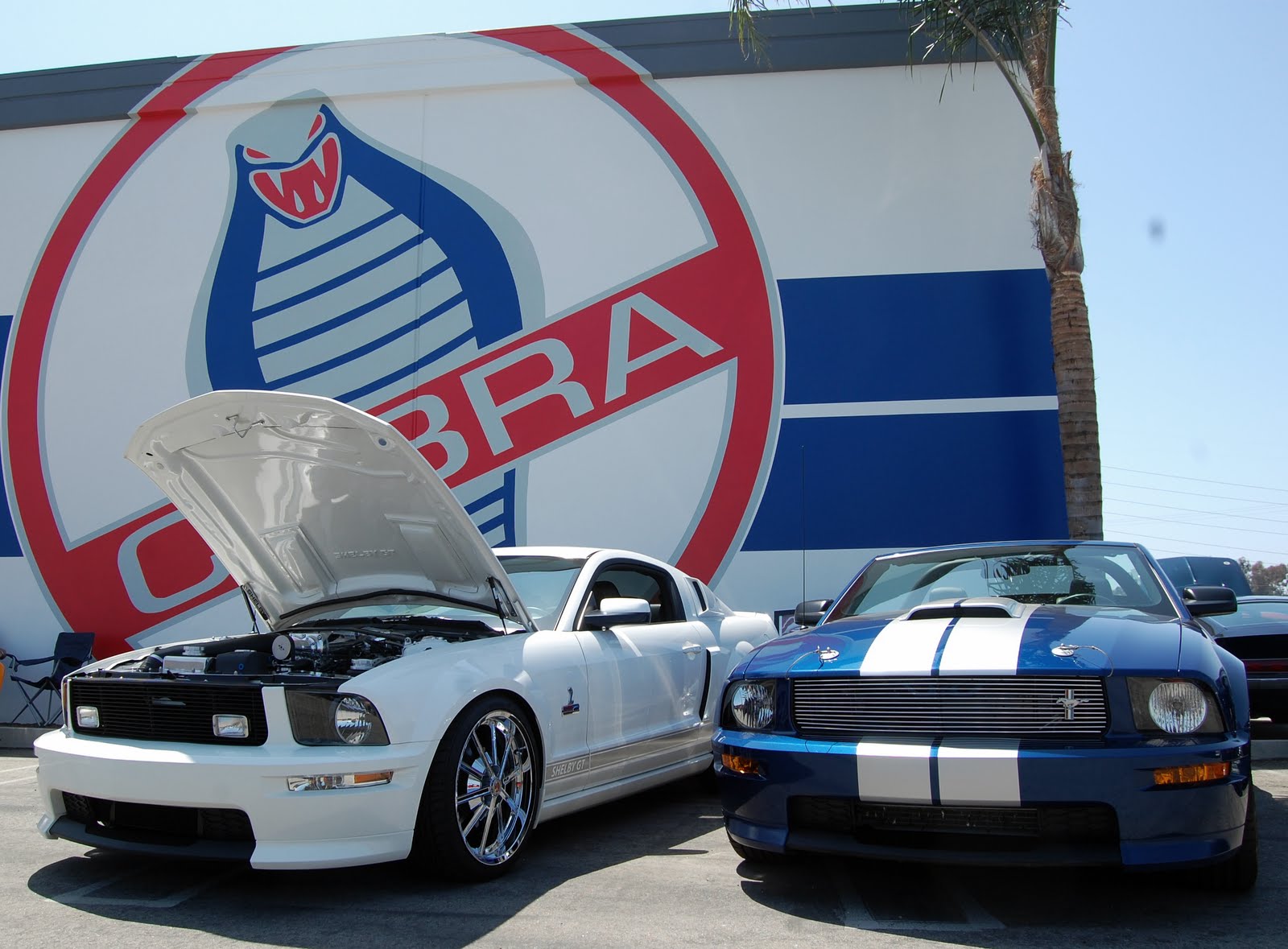 Shelby was reunited with Ford in 2007 and the Shelby GT500 was revealed to a drooling public, featuring a 500 horsepower supercharged 5.4 liter V8 mated to easily pulverized rubber. 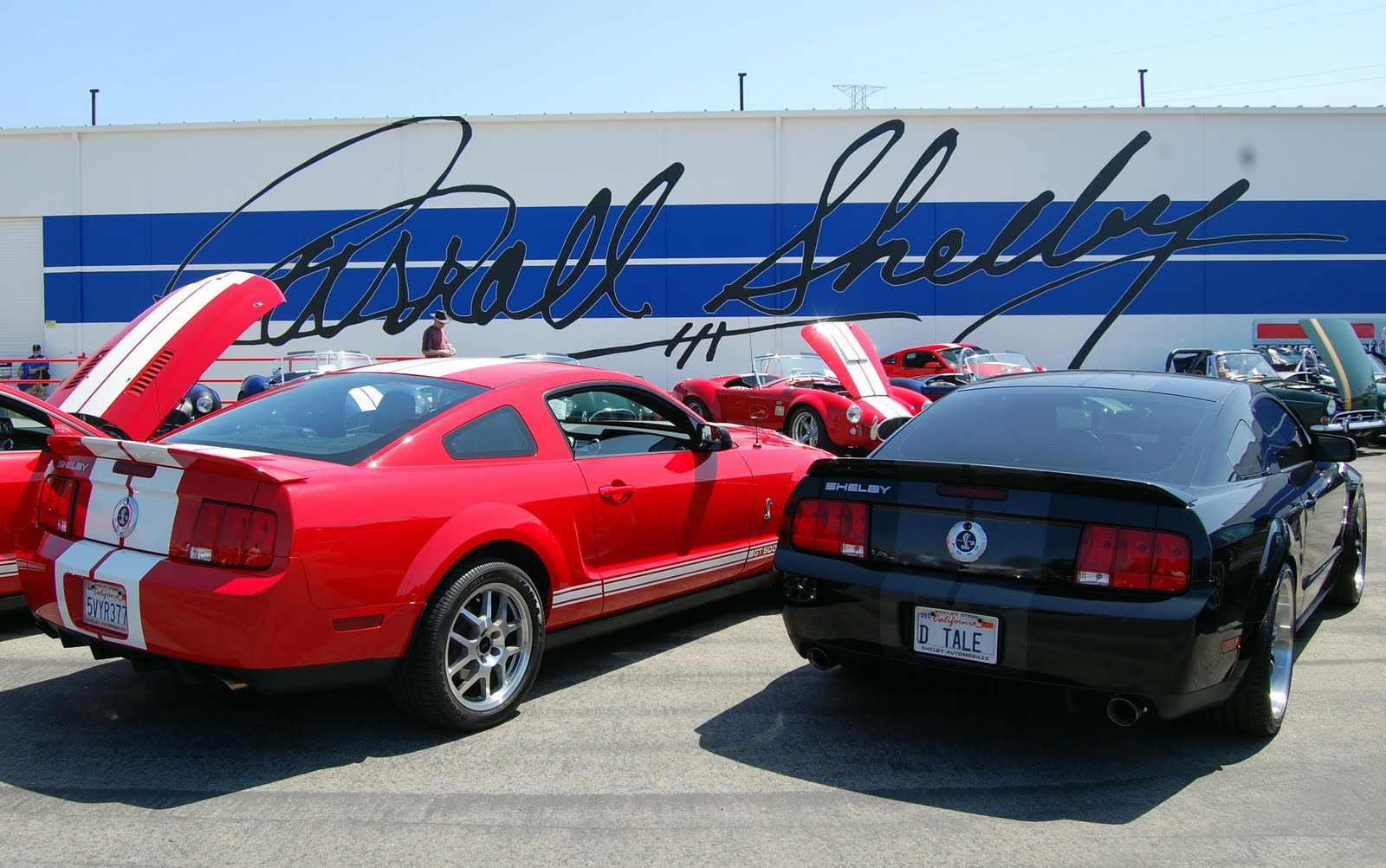 A limited number of Shelby GT versions were also sold that featured a 300 horsepower V8 and some Shelby specific tuning and are rumored to be very competitive in F Stock SCCA autocross. Not sure if Shelby had anything to do with the Lincoln Continental Mk VII LSC coupes, but they were powered by Ford 302 V8s and can be purchased with DailyTurismo money… 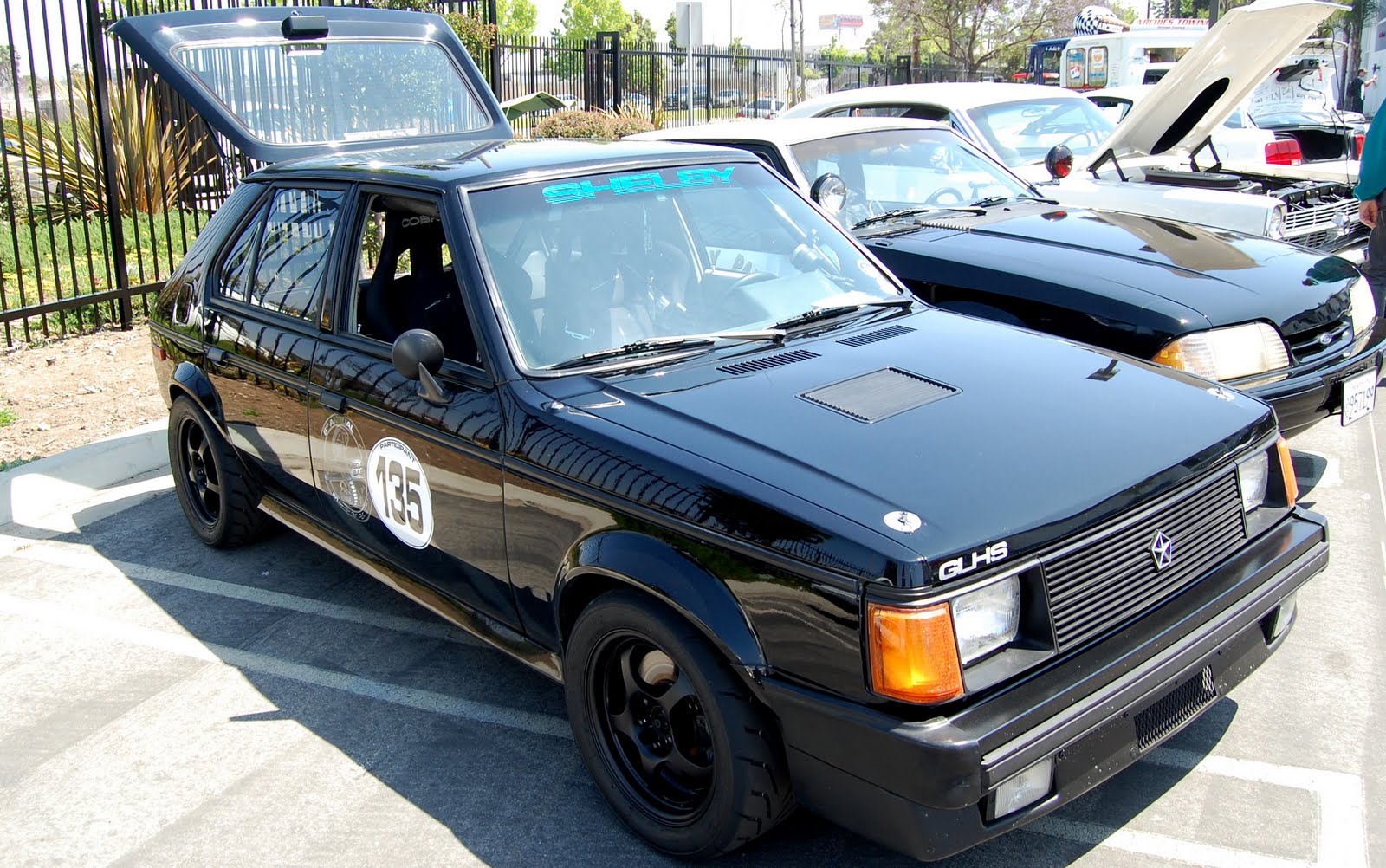 Clearly the star of the show was this extremely cool Shelby GLH-S – Omni based coupe. It was wearing some sticky rubber and had a seriously loud blow-off valve. 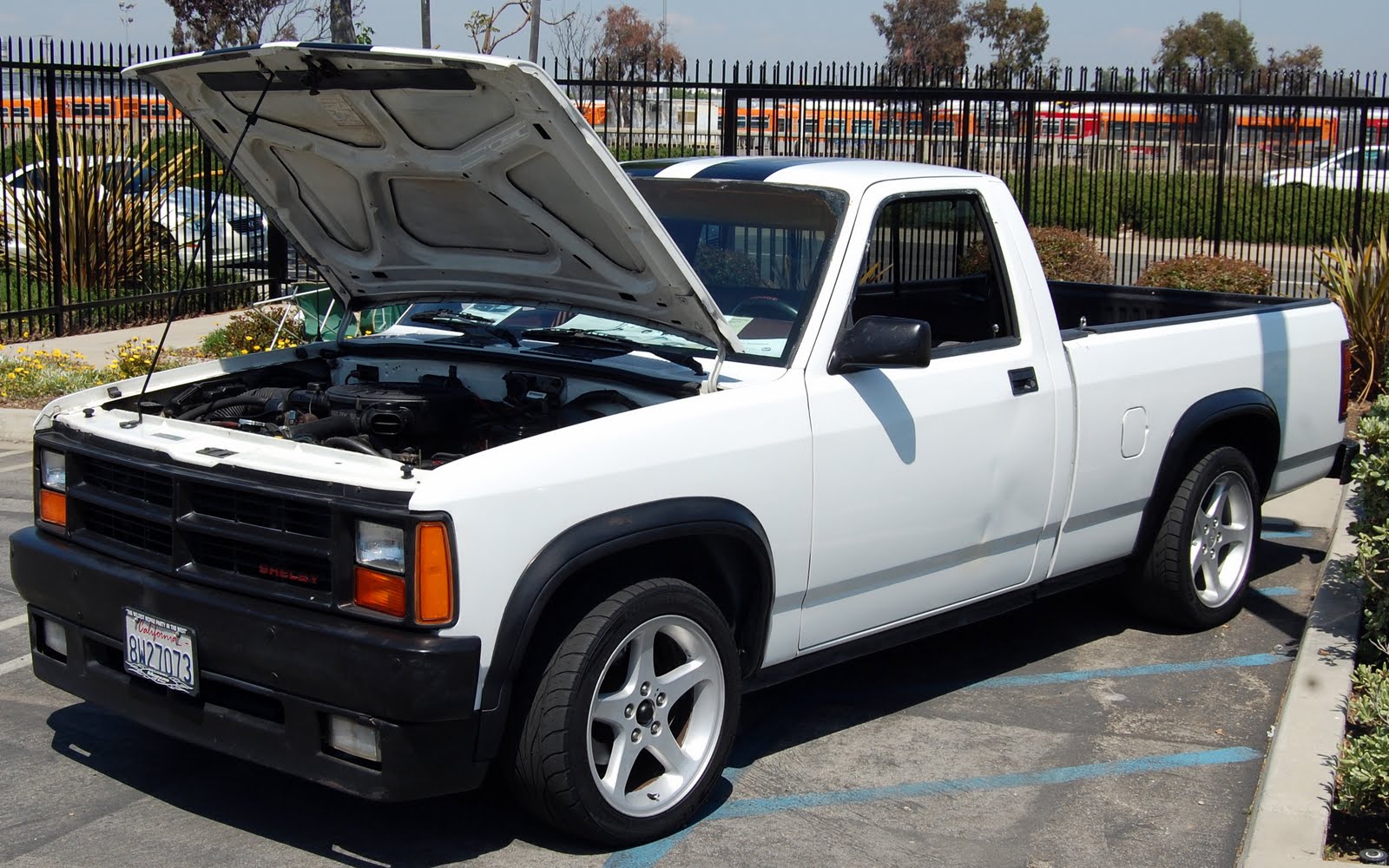 Another classic 80s Shelby creation is this Dodge Dakota pickup – complete with dents on the side and generally looking like a car that would be a good time to drive. 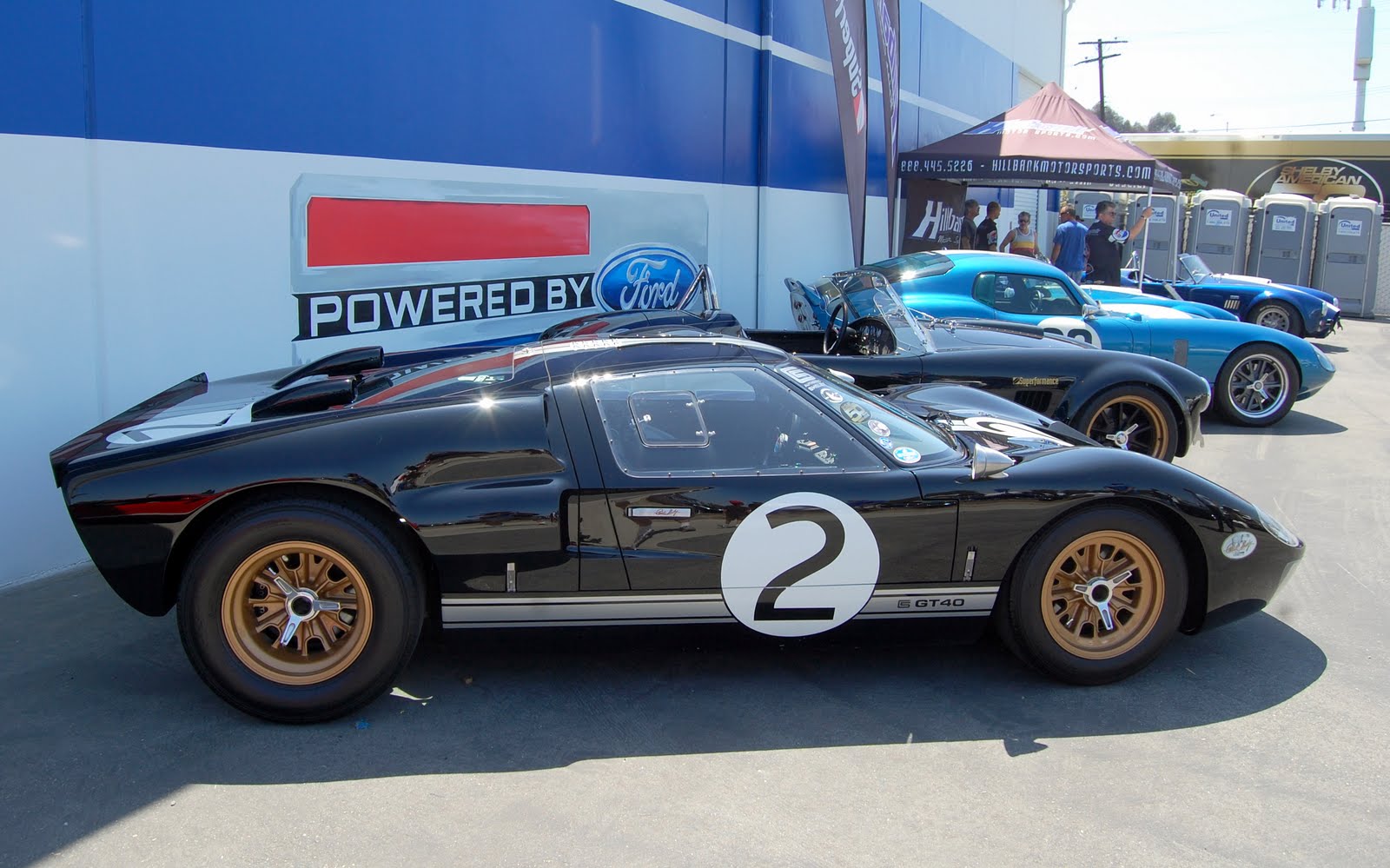 A few Superperformance kit cars were on hand, including this wicked looking GT40 replica. 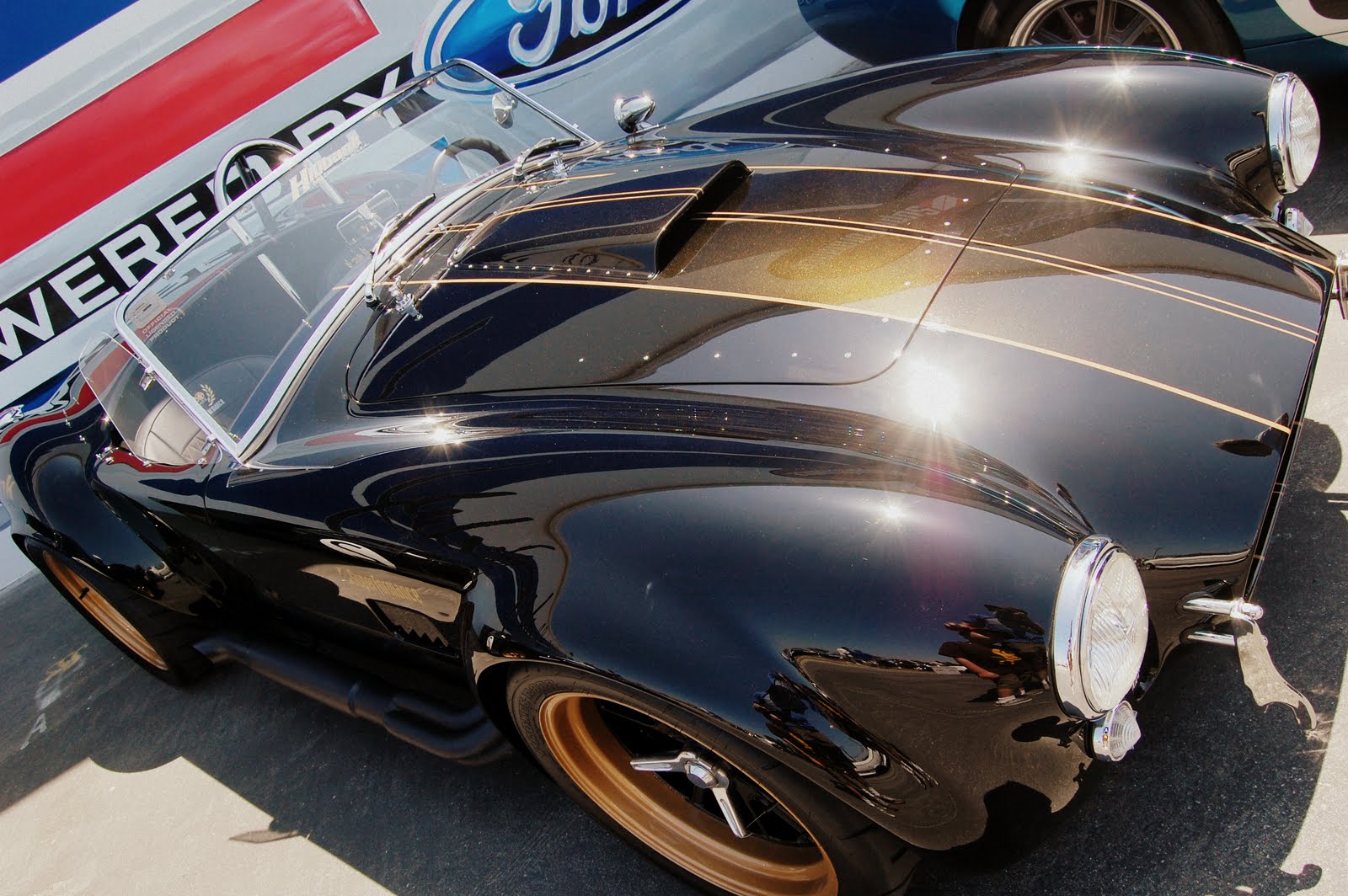 We also couldn’t help but stare at the racing stripe treatment on another Superperformance kit car – this time a Cobra look-a-like that had a gold metal flake stripe that faded in/out of the black base color when viewed from different angles. 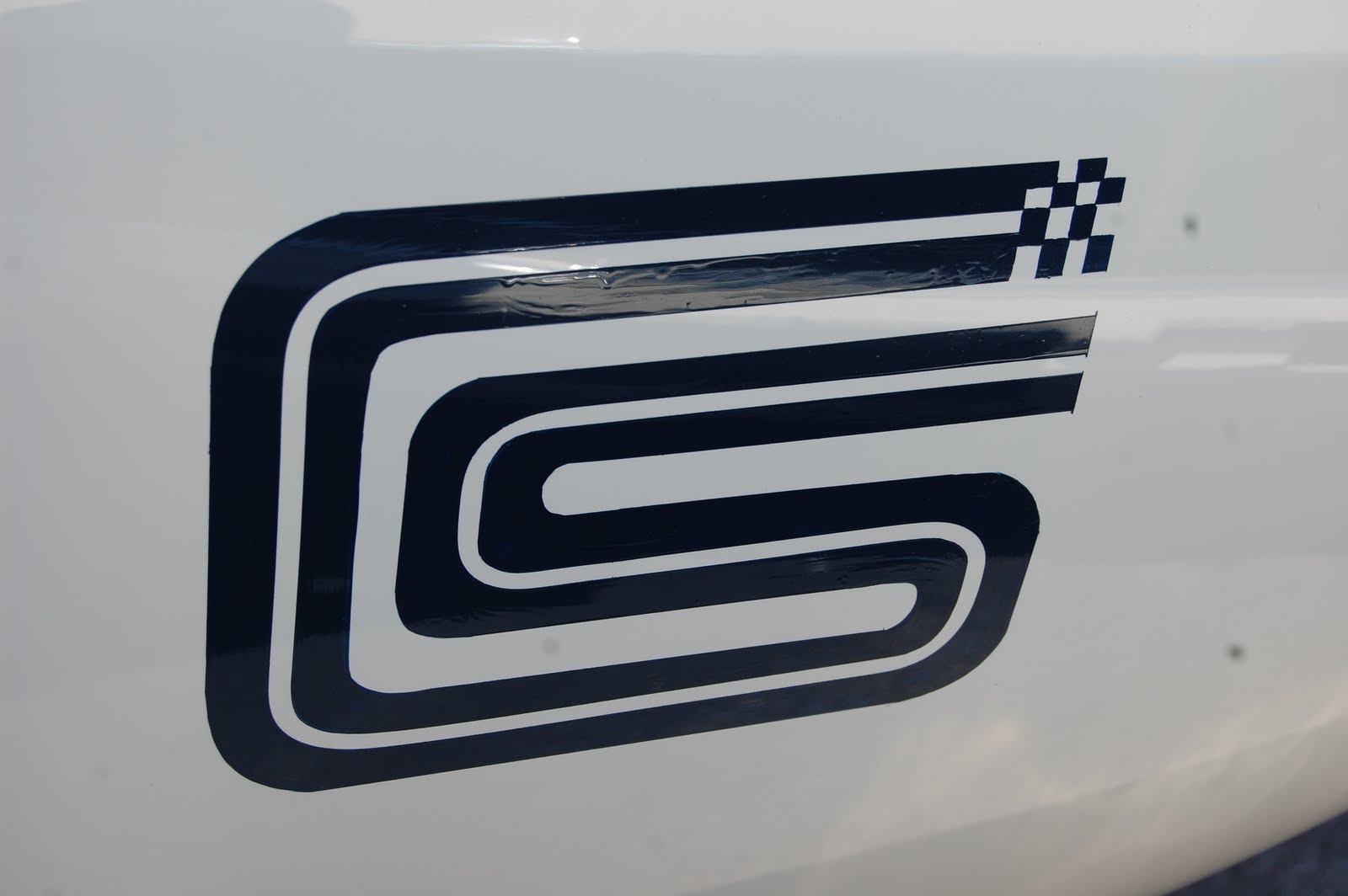 If you happen to be in the LA area next may for the 2nd Annual Carroll Shelby Tribute and Car show and have any interest in classic Shelby iron, we highly recommend swinging by for a visit – it is well worth the $10 suggested donation to charity.

All photos copyright of DailyTurismo.com