by Adam — Without
an engine this RX-7 is the chance to build the convertible race car you
have wanted but could not afford. With a race coming up this Saturday and Sunday
here’s your chance, if you hurry, to make your own LMP2 car. The car
has some of the heavy lifting done, but with the engine removed and LMP2 requirements of requiring the use of production based engines that
one off, two stroke, opposed flat twelve you designed will just need to
wait. Wide body kit already fitted and much of the fabrication started
the seller notes some re-welding may needed. Pick your livery, decide
what will power the Mazda shell, get it done before Saturday,
and start at the back of the grid. What could be easier? The seller
intended to build a track monster, but his loss is your gain, so once
finished you can be a monster on the track. Whether you try to enter
this in Lemons, Le Mans, your local track, or decide to annoy the old
fogies in charge of the home owners’ association with your straight
pipes you can find this 1988 Mazda RX-7 in Lynchburg, Virginia  for $1,200.00 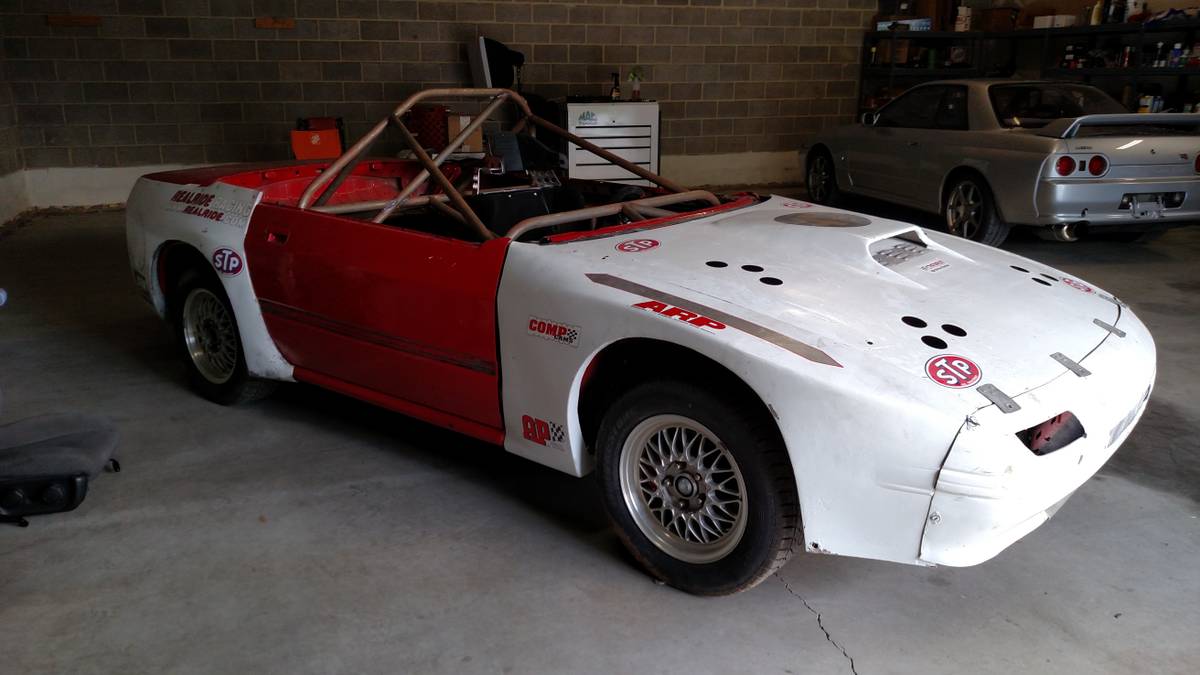 From
the seller this is a FC car and the convertibles started production in
1988 until 1991. The Wankel rotary engines which powered the front
mid-engine RX-7 came available with naturally aspirated fuel injected or
turbo charged engine producing between 150 hp and 215 hp. With wide
body kit in place and the camber plates bolted in and ready for
adjustment the seller made it part way down the path. The manual
steering rack could be fun in a car this light if finished correctly.
Photos of the body show it to be relatively rust free, but are not close
up so on-site inspection would be a must. Any potential buyer should
triple check that roll bar and make sure of compliance with any
sanctioning body for the series you are considering. Looks a little
small and does not appear that it would pass tech inspection in France
no matter which language you speak, but again caveat emptor. 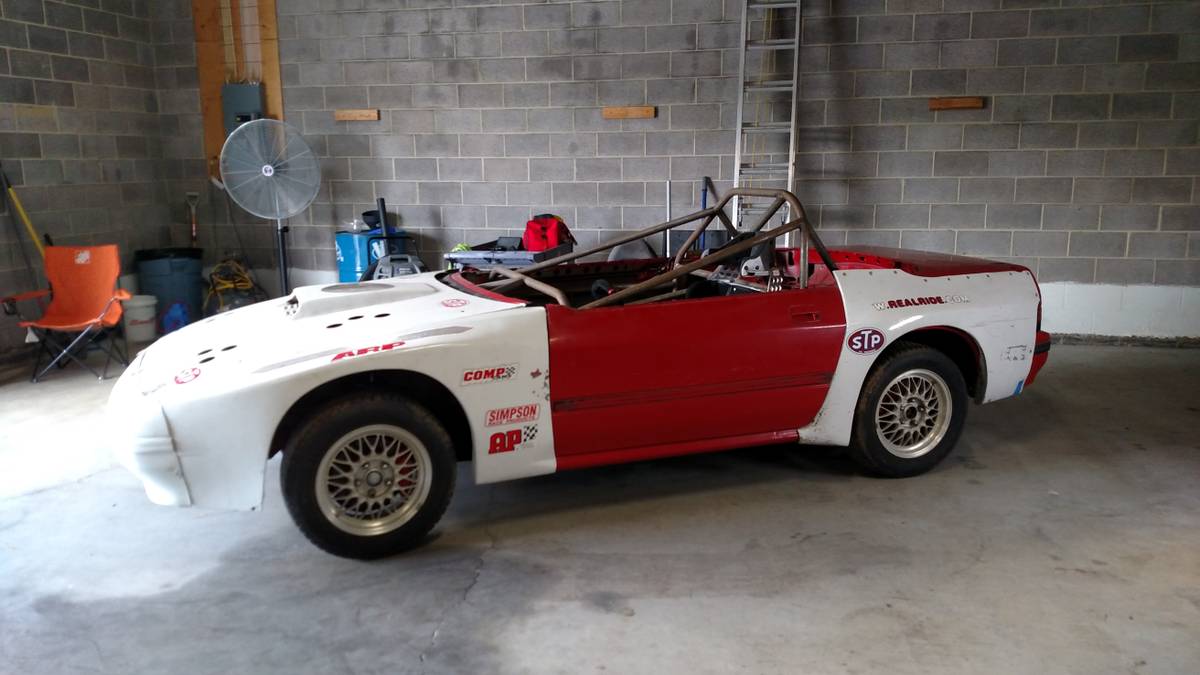 The
engine bay is indeed bare. An RX-7 missing the Doritos shaped rotor is
no RX-7. Call this what you want, and it may have started life as an
RX-7, but is no longer the Mazda we know and love. This leaves a clean
engine bay for an LS1 swap, Ford power, some sort of newer turbocharged
small displacement engine or better yet use that Wright R-975 Whirlwind
nine cylinder air-cooled radial aircraft engine you have been saving for
a special occasion. More radials of this type were used in armored
vehicles than airplanes anyway and can put out up to 550 hp while having
that chest thumping sound. While it may hamper visibility up front the
cool factor would be off the chart. Hey, if it was good enough to make
the M18 Hellcat Tank Destroyer the fastest armored vehicle in the world
until the M1 Abrams it definitely needs to be considered. With a radial
engine up front the goggles and scarf are mandatory. On second hand just
pack a S4 naturally aspirated or turbocharged engine back in the way
Akio Uchiyama intended. All will be right with the universe that way.
Parts are easier to find and cheaper for a rotary than for a radial
engine anyway. 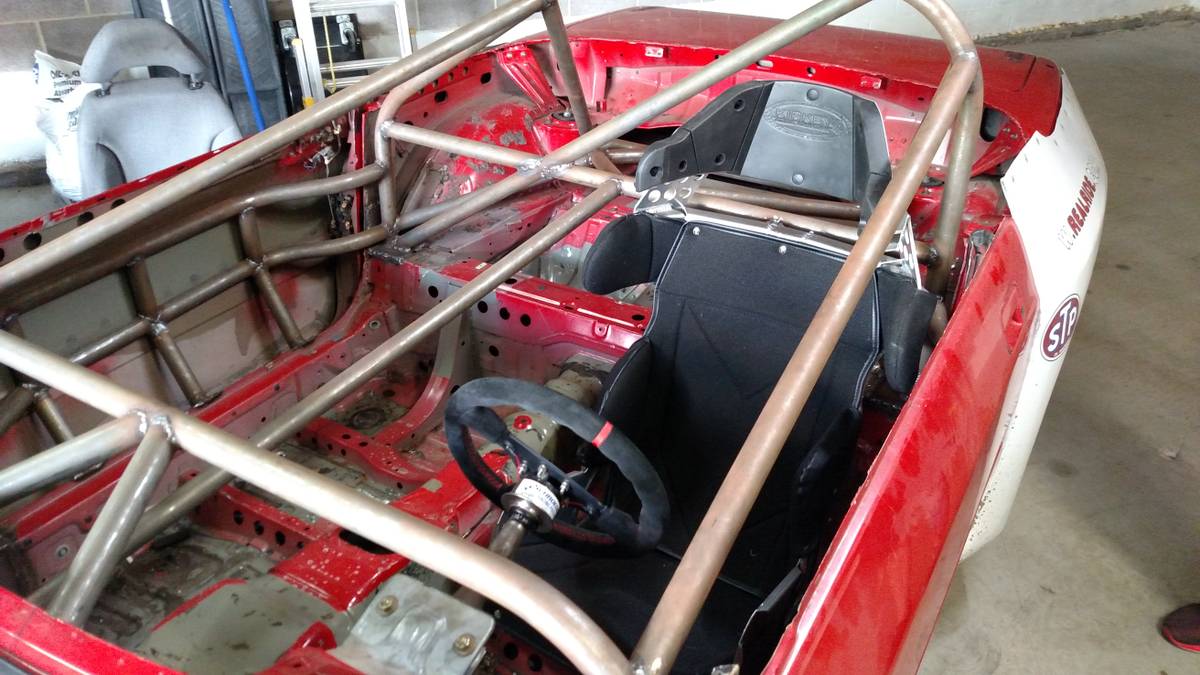 The
interior is stripped as one would expect in a project car. A Kirkey70
series full containment racing seat is included, but at the pace I work
the seat will be out of date before the car is ready to hit the track.
Not much is needed in the way of comfort and LM P2 rules require a
second seat but I think you will have a hard time convincing the wife
that this can do double duty as a backup car to take the kids to school
should your daily driver break down. 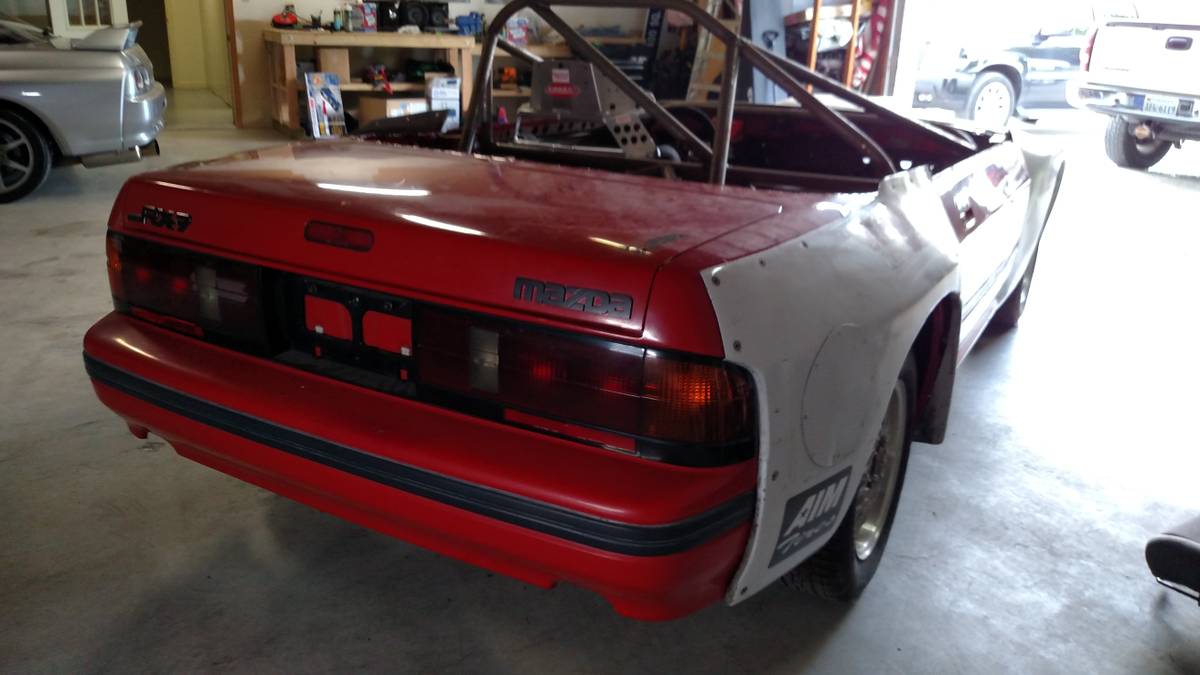