Welcome to a new Daily Turismo special feature — ToolsDay…wow…what a horrible name.  We apologize for the fault in this feature’s name. Those responsible have been sacked. The new DT feature is called Daily Toolrismo.  We apologize again for the fault in the feature’s name. Those responsible for sacking the people who have just been sacked have been sacked. The Daily Turismo is proud to announce a new feature Wrenches, Crowbars and Turny-thingies — Wrectum for short….The editors hired to continue this feature after the other people had been sacked, wish it to be known that they have just been sacked.  This feature has been completed in an entirely different style at great expense and at the last minute. 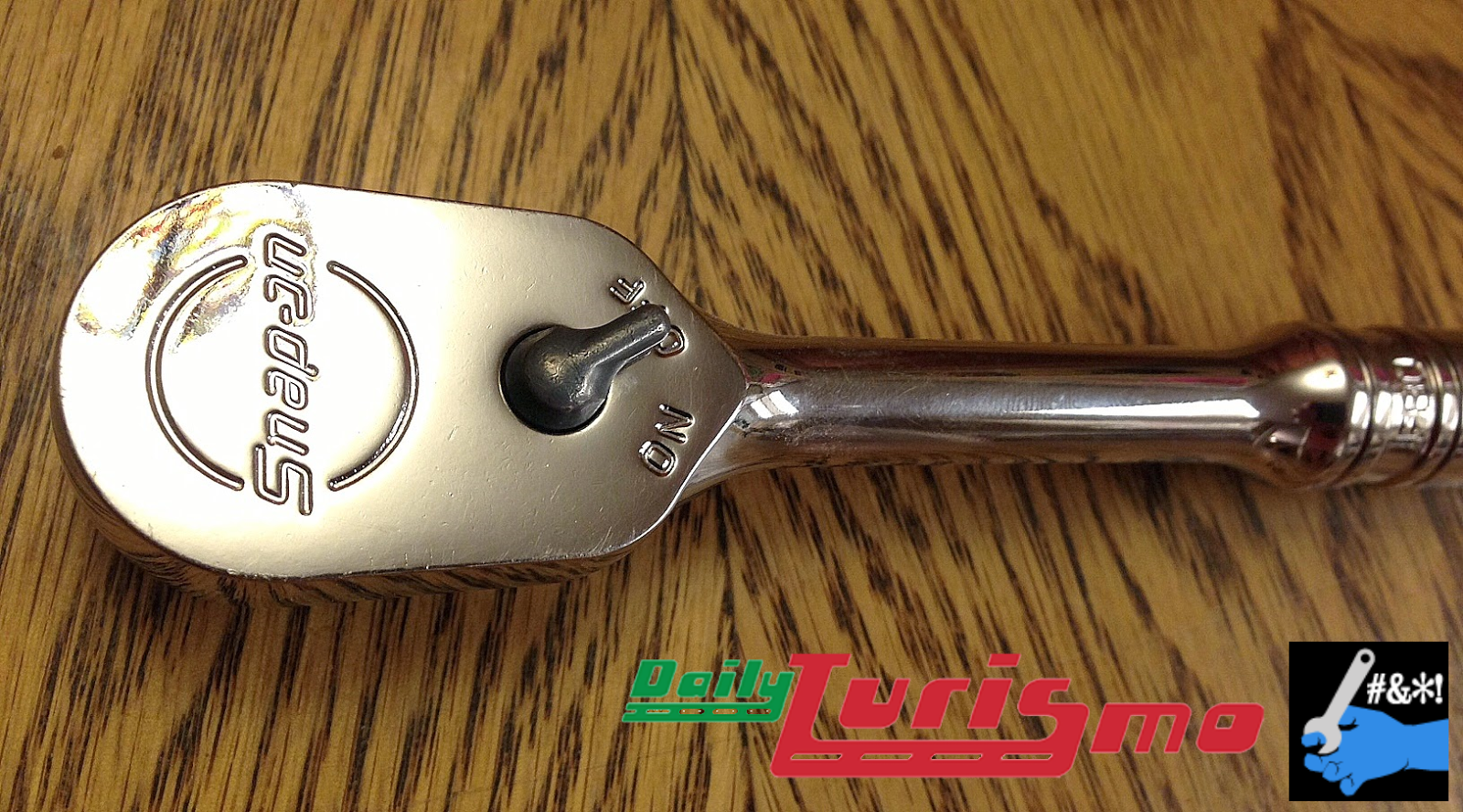 I’ve been telling people for months that I’ve wanted to do tool reviews on this site.  Not reviews like you’ll see elsewhere on the internet, where an underpaid blogger has been given a shiny new free thing and has to give a good review to keep the free stuff coming.  Or worse, the internet sites that live on affiliate links and only get paid when you buy the pile of horse pucky they blindly recommend but have never touched in the flesh.  No, the Blue Glove Tool Review (where the nitrile meets the wrench (TM!)) is going to be a regular feature where we at the Daily Turismo share some tips/tricks from our late nights of wrenching, drinking, and cursing. Expect to see some affiliate links, because if we are going to recommend a product, we might as well get paid.  But, don’t expect a crappy offering to be given a pass because they pay us.  Ain’t gonna happen. 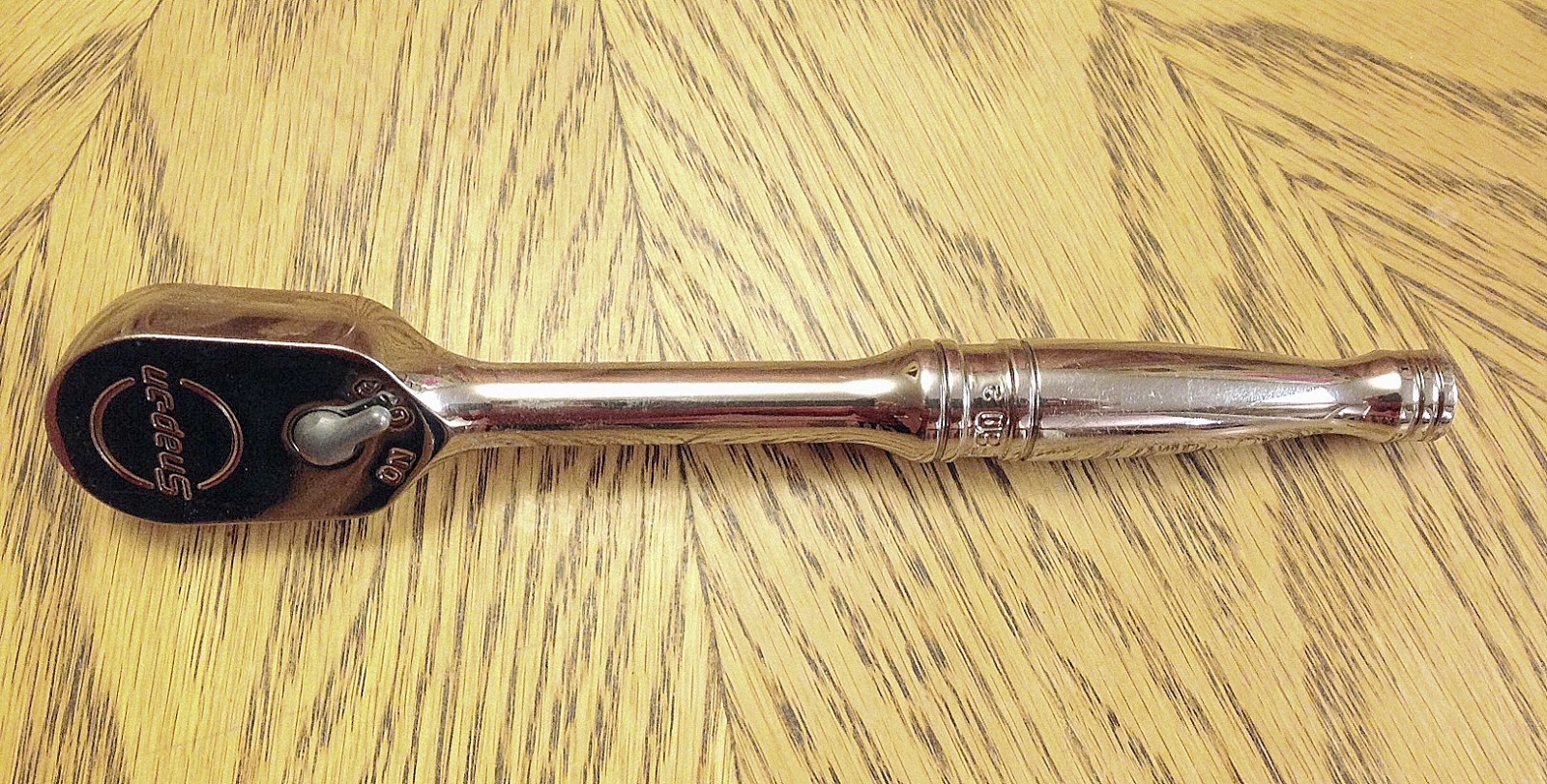 The subject of this feature is the Snap-On 3/8 inch drive F80 ratchet, which you can buy here directly from Snap-On for $99.95 (but we don’t get a dime from those cheapskates) here on Amazon used for about $74.99, or you could roll the dice and buy one here on eBay

, hoping it isn’t a fake imported from China…but I am getting ahead of myself.  Typical reviews of tools/junk on the internet involve a few hours of research and some touch time with the product, unless you read articles on self-described premium review sites like thesweethome where the writers spent 40 hrs reviewing a set of adjustable pliers — a device that should never go anywhere near anything resembling a fastener and is best used for home defense to deliver blunt force damage to potential intruders.  Not to be outdone, I’ve spent the last 2 years using this Snap-On 3/8in drive ratchet on a daily basis for everything related to spinny things in my home/garage/shop/man-cave.  See those scuffs and marks in the finish?  This bad boy has earned this review the hard way. 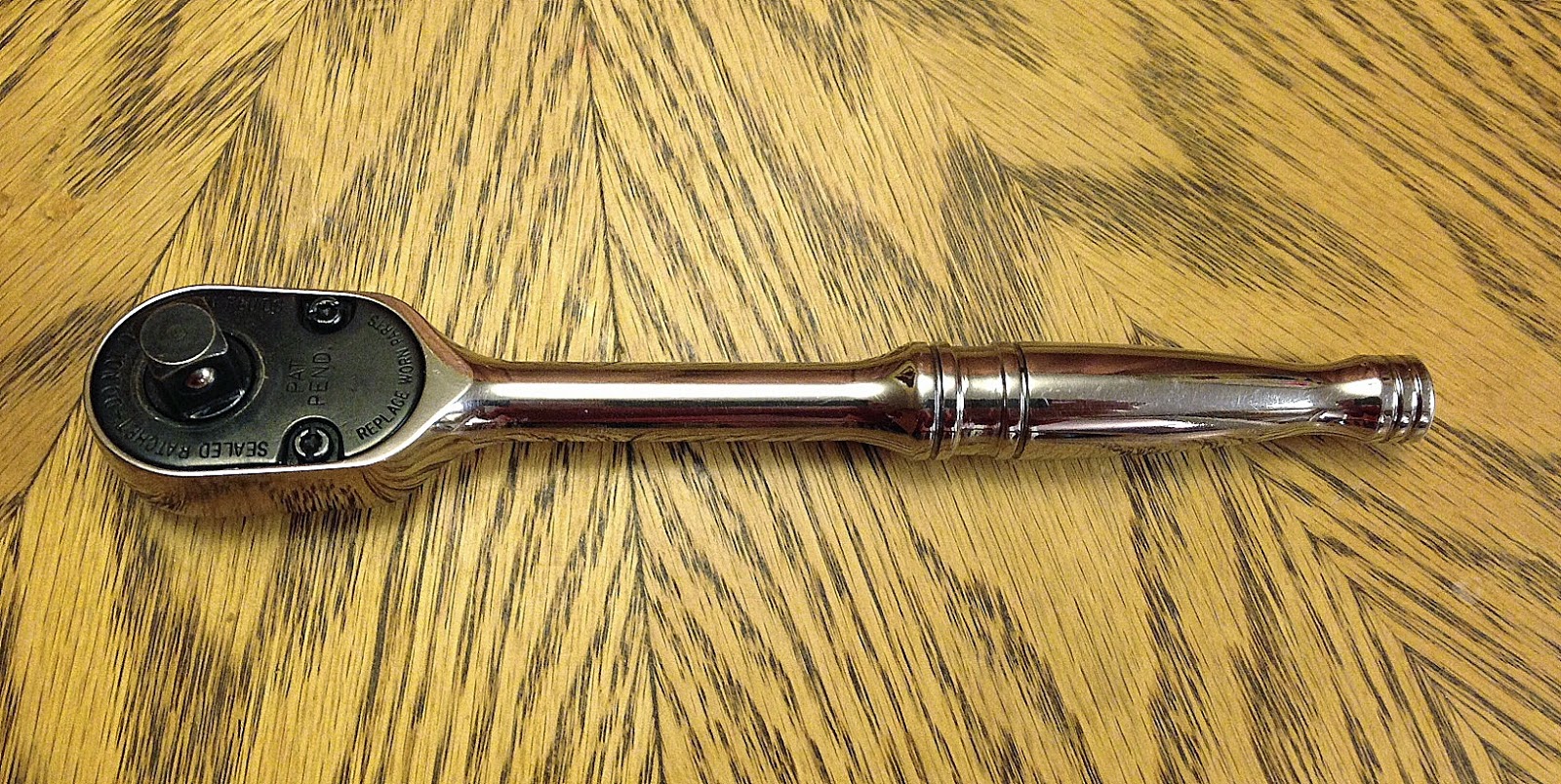 You might say — hang on, Snap-On tools in a cheapskate’s garage?  What gives?  Truth be told, this is my one and only Snap-On tool purchased new (I picked up a used piston ring compression & valve spring tool set at a garage sale a while back), and it was a carefully selected purchase.  Many years ago my toolbox started with one of those 250 piece sets of Craftsman tools — a great buy at $300 considering the sheer number of tools involved.  However, I had used borrowed Snap-On tools occasionally decided I wanted a premium tool for the most commonly used mechanical part in my toolbox — the 3/8in drive ratchet. 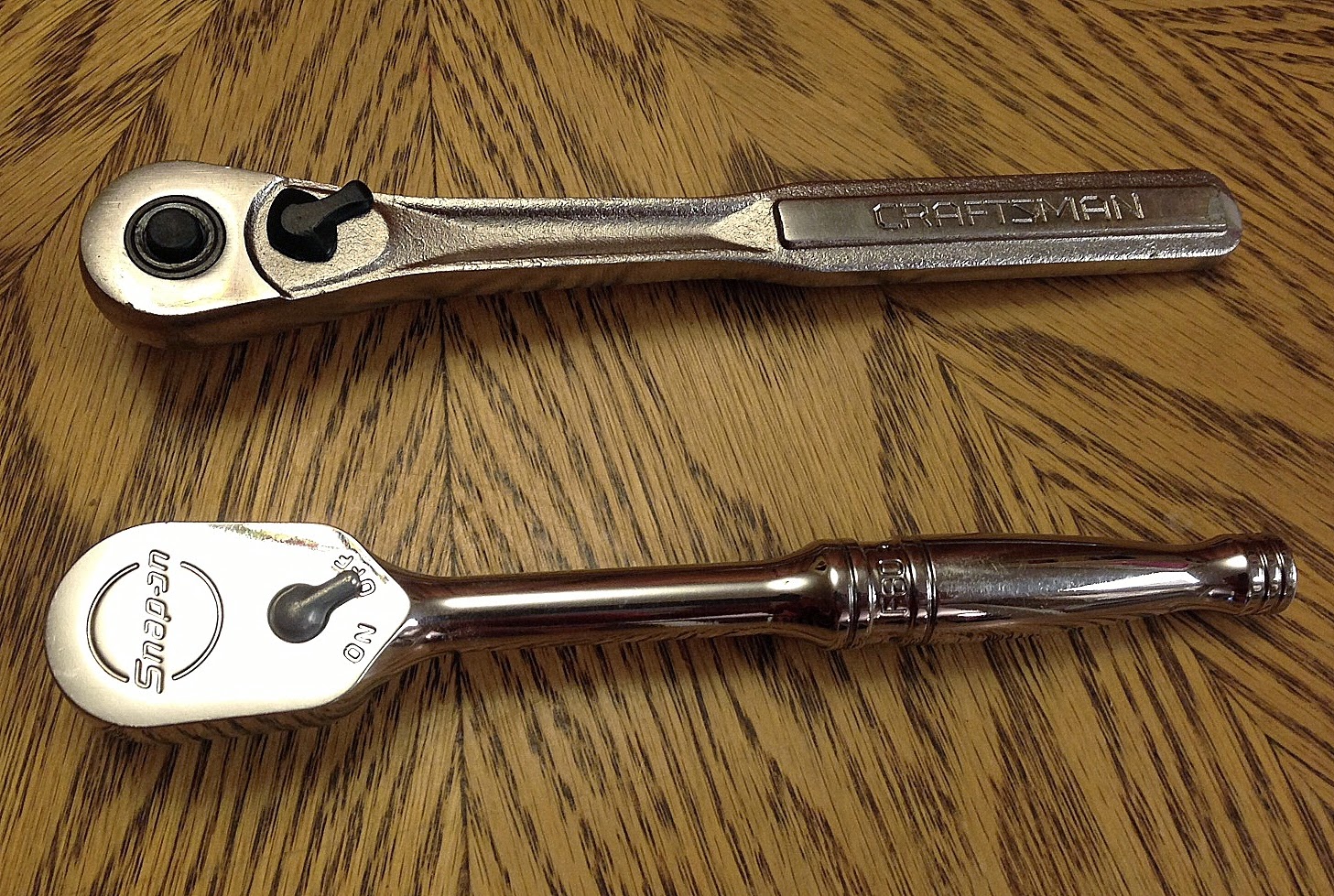 For decades I had used a Craftsman 3/8 drive ratchet available here on amazon for about $21 (pictured above with the Snap-On F80), but a few years ago I made the critical error of bringing my ratchet into Sears for a “new” one per the lifetime guarantee on all Craftsman tools.  The new ratchet I received was arguably worse in slop than the tool I turned in and subsequent exchanges didn’t improve things.  I think they just put the previously exchanged wrench into a box and you get someone elses old wrench…so on and so forth. Everybody is happy.  Blame it on Craftsman tools no longer being made in the USA (notice they don’t have the USA logo on them as of a few years ago) or Sears trying to maximize profit — but the basic new Craftsman ratchet mechanism is sloppier than a 35 year old BMW guibo. 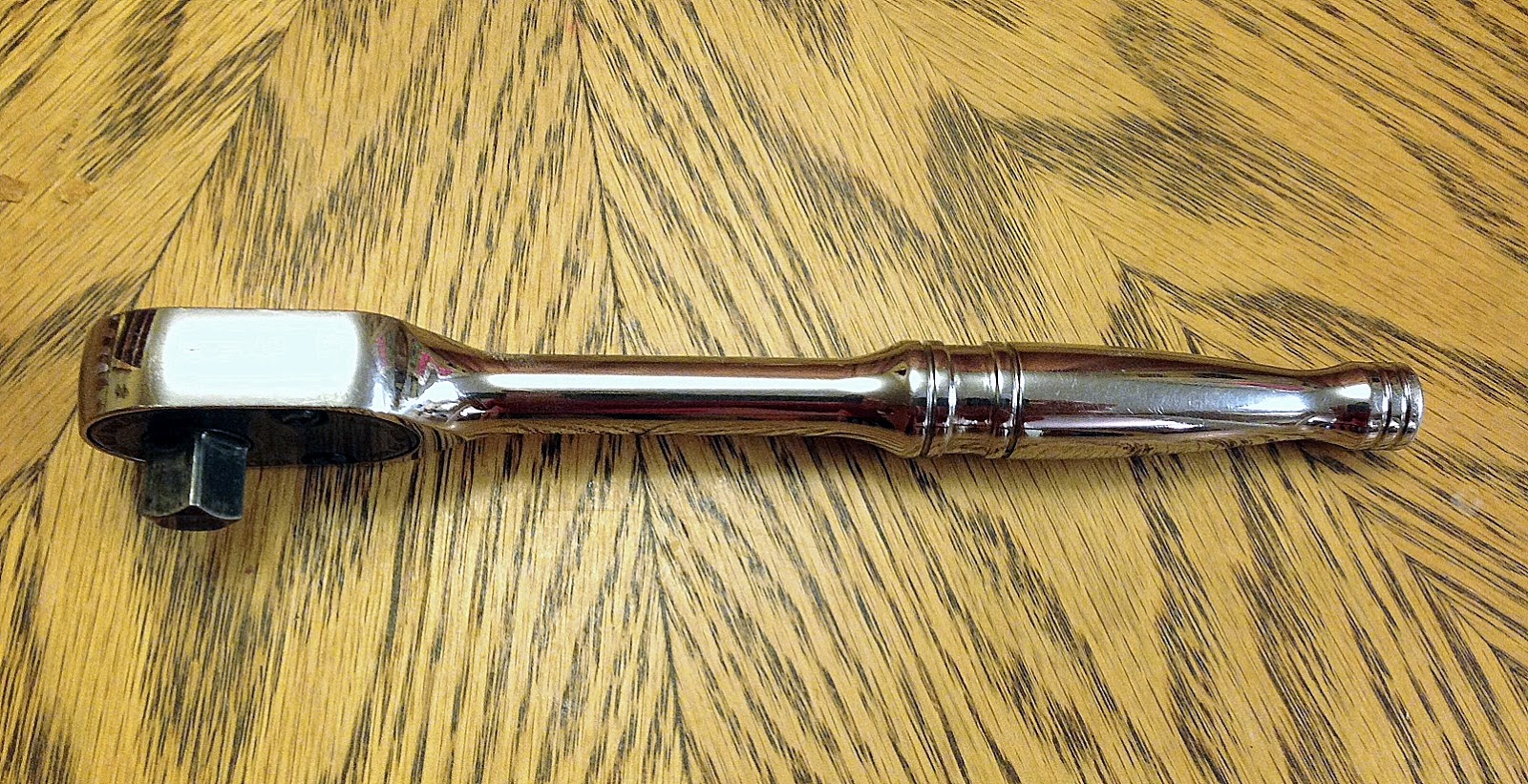 The Snap-On F80 on the other hand is laser precise in its ratcheting mechanism, even after being used for 2 years as a ratchet, hammer, inspection mirror, and breaker bar.  The F80 has 80 discreet teeth on the gear in its head, meaning that each click of the ratchet is 4.5 degrees, versus a measured 36 clicks on the Craftsman or 10 degrees per click.  Add up some additional slop in my particular Craftsman 3/8in driver and I could get up to 15 degrees before getting a click.  This means that in tight places you are fighting to get a single click on the Craftsman and getting 3 on the Snap-On.  This makes a huge difference. 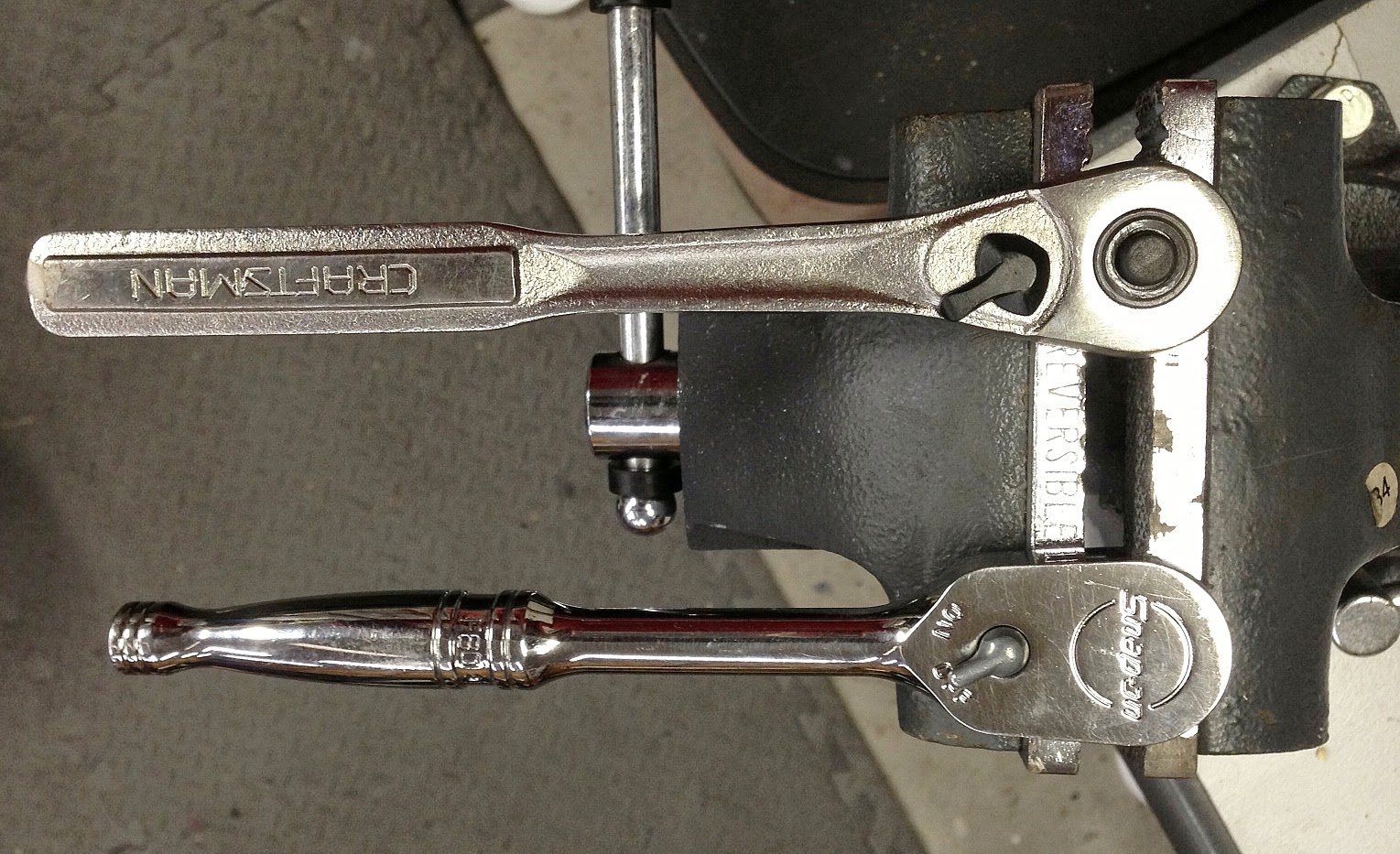 I did a very scientific test in my garage, that involved clamping the two ratchets into a vise and moving them around.  Both had the same amount of up/down travel, which isn’t a bad thing because you sometimes need that additional angle to get a bolt and don’t need/want to be perfectly orthogonal to your fastener to get it out.  The biggest difference was the distance to a ratchet click and the Snap-On was the clear victor.  The Craftsman has a small button on the back of the head to retract the ball holding the socket on, and it does make releasing the socket easier.  A greased up socket can be difficult to remove from the Snap-On head; this victory goes to the Craftsman. 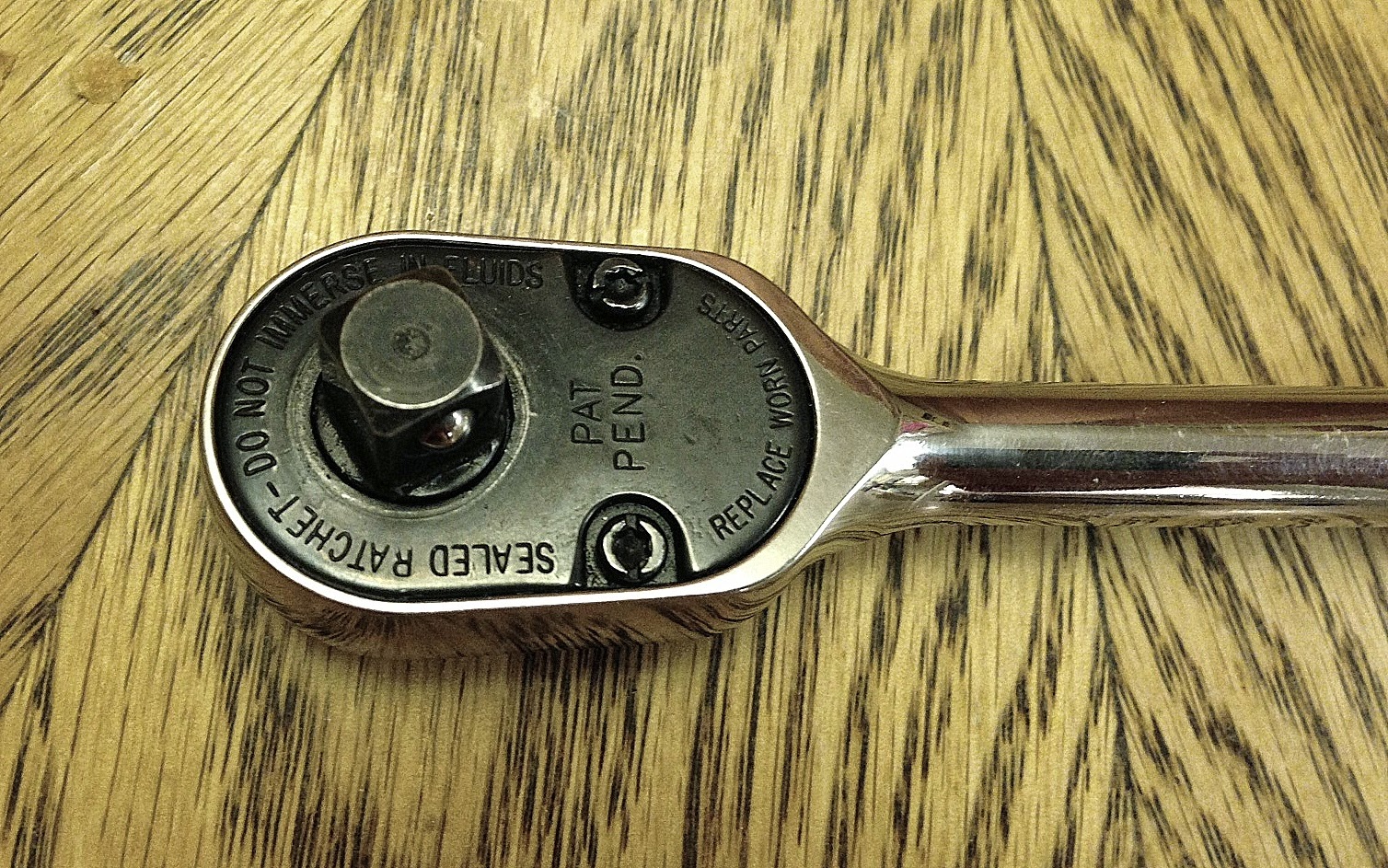 Bottom line: Even at $100, I can’t help but be extremely happy with the value in the F80 3/8in ratchet.  I don’t recommend going out and buying an entire set of Snap-On tools; they are prohibitively expensive (and you won’t noticed much difference in a box-end wrench or a socket) but if you are going to splurge on one tool, get the F80. You can find it here directly from Snap-On for $99.95, here on Amazon used for about $74.99, or buy one here on eBay

Got a tool you want us to write about?  Send us a tip here: tips@dailyturismo.com