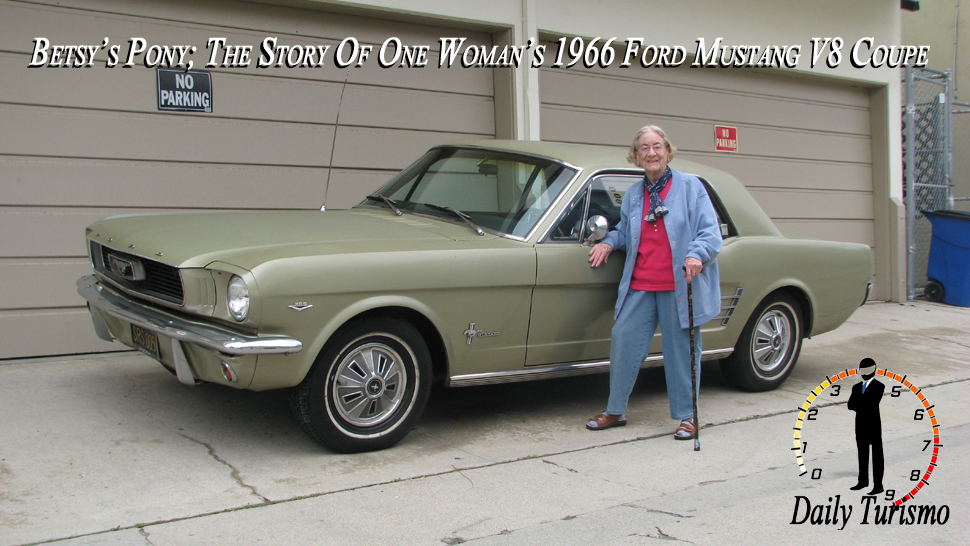 In 1961 Betsy traded her 1957 Dodge Coronet Lancer to a dealer for a new Mercury Comet..and instantly regretted it.  Five years later, she traded the unloved Comet for a 1966 Ford Mustang and hasn’t driven anything since.  This is the remarkable story of a woman and her car of 47 years.

Betsy was born in 1922, notable for being the year of the famous Teapot Dome scandal and the year that Egyptian Pharaoh Tutankhamun’s tomb was entered for the first time in 3000 years.  Betsy spent her youth in upstate New York, but in 1960 moved to Long Beach, CA with her mother and hasn’t missed one minute of the cold winters. 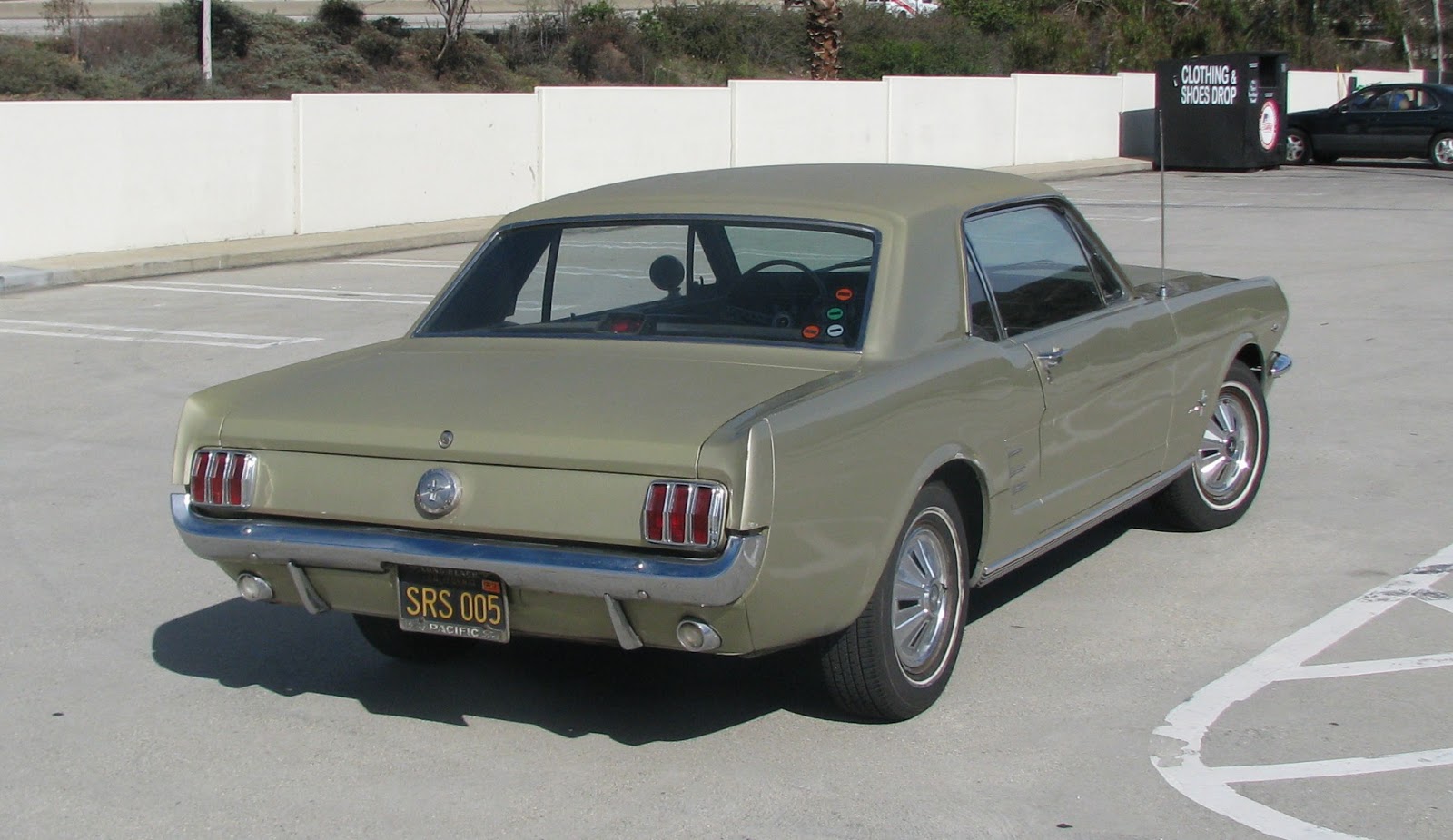 California’s famously mild weather has been equally kind to the Ford Mustang that she purchased new from Pacific Autosales on Feb 23, 1966 for an out-the-door price of $3009.  Betsy was 44 years old when she purchased the car and used funds from her job as a commercial artist at a department store in Long Beach.

Betsy worked in the Buffums’ advertising department from 1960 until the department store chain shuttered its doors statewide in 1990.  Her work consisted mostly of advertising and catalog illustrations.  The above photograph was taken around the time Betsy first started driving her coupe and we can almost see it among the vintage steel.

Some artists are specialists, Betsy did just about everything; fashion, jewelry, toys etc.  One of her most memorable jobs was the design of the “Buffy” teddy bear for the department store’s Christmas collection. 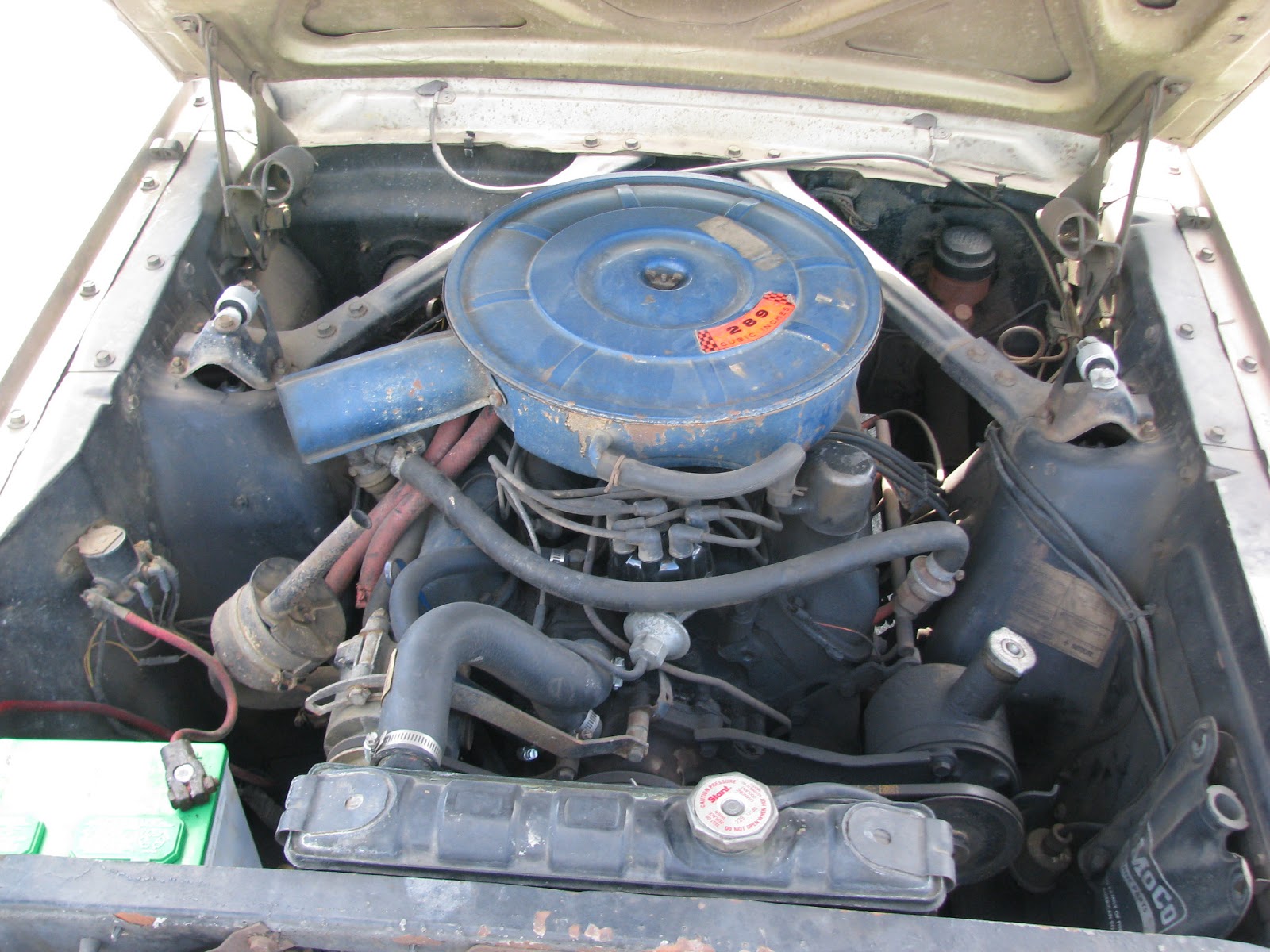 Betsy wasn’t a speed junkie, but she did opt to upgrade the base inline-6 to an available V8.  The C-Code 289 cubic inch V8 put out 200 horsepower and 282 ft-lbs of torque, enough to propel Betsy and her Pony to an indicated speed of 90 mph once when she was driving through lawless Canada!  Under hood it is in ‘unrestored’ condition, and it is nice to see an intact FoMoCo labeled washer fluid coolant overflow container (correction from DT reader “rebis“) and the (usually removed by now) factory California required smog air pump is still cleaning up the exhaust on cold start. 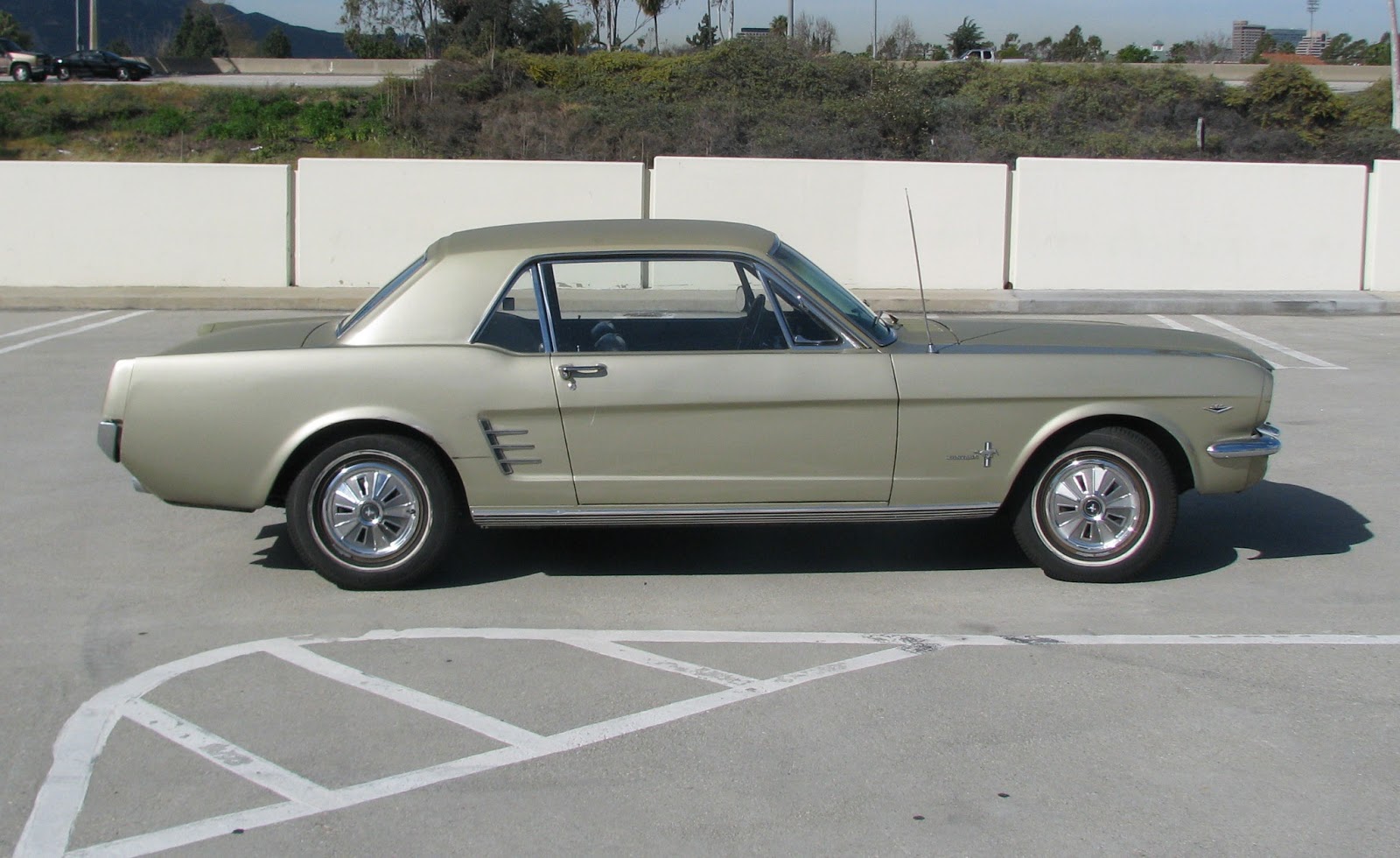 When asked what makes her happy, Betsy will often reply; “simply living in warm, sunny California.” Those days are certainly enjoyable when cruising around in a vintage Mustang like this one and listening to the original AM radio in the dash. 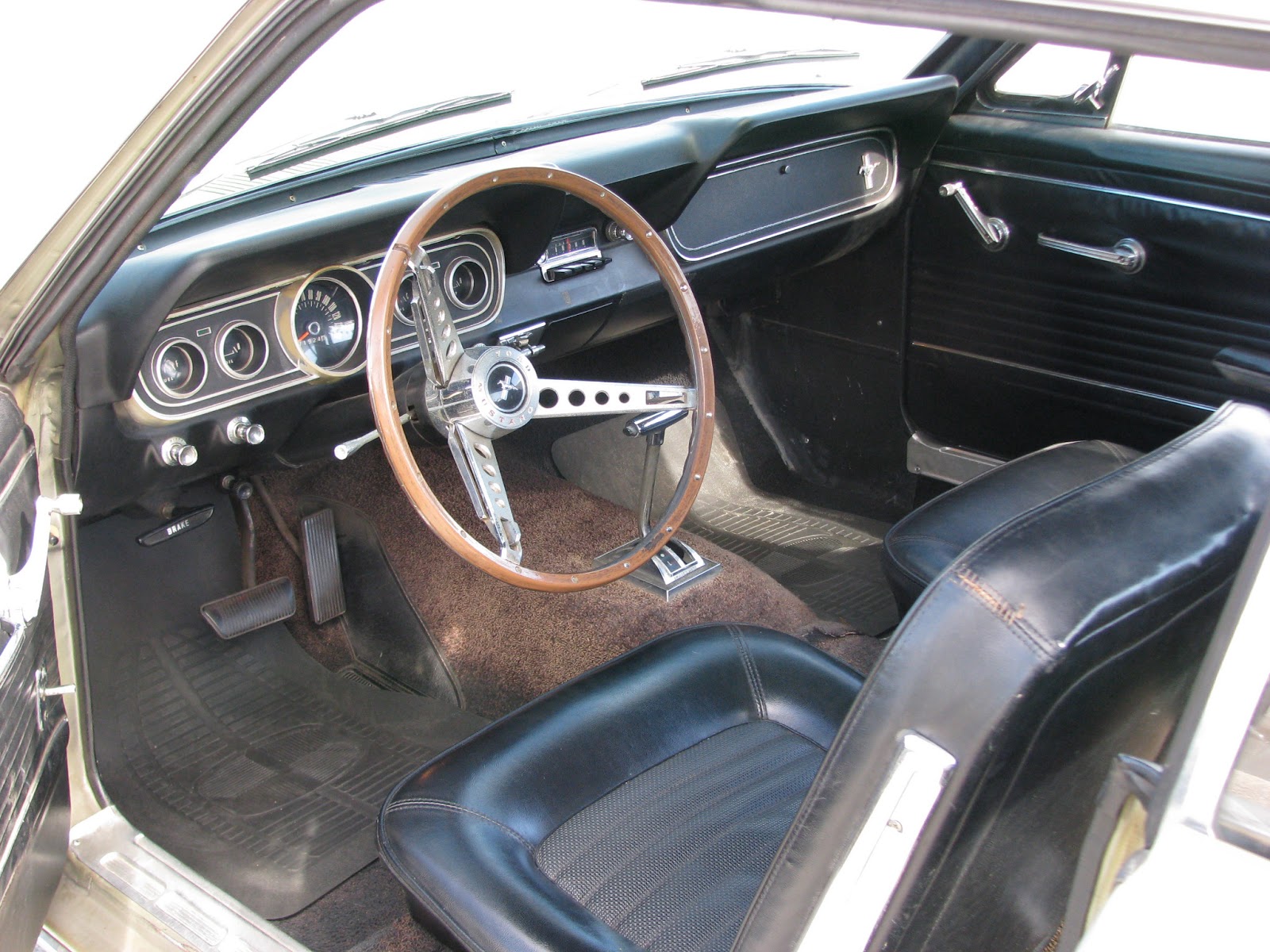 Asked about the color combination, Betsy admits that she wasn’t searching for a greenish/goldish exterior, but she just had to have a black interior and this was one of the few on the lot.  Back in the 1960s, the color (interior and exterior) combinations were much more varied than in today’s offerings; for instance, in 1966 Ford offered 17 different exterior paint colors for the Mustang. 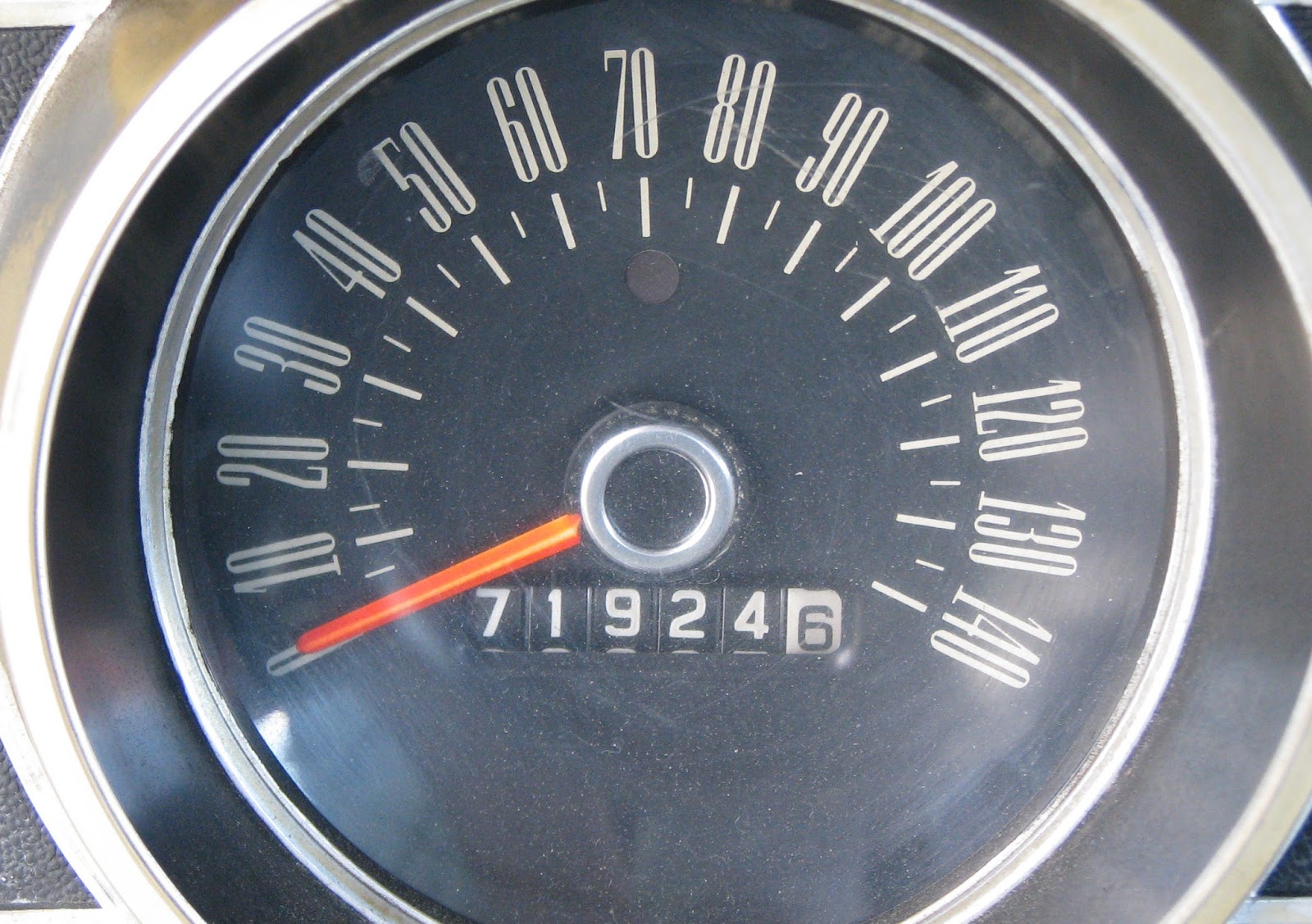 Betsy has fond memories of driving the Mustang on road trips with her mother, and she recalls driving to Washington, DC to see cherry blossoms bloom, so it is understandable that the mileage on the 5 digit odometer has rolled over.  Maintenance records dating back to 1971 indicate the mileage is 171k, averaging out to only 3600 miles per year. 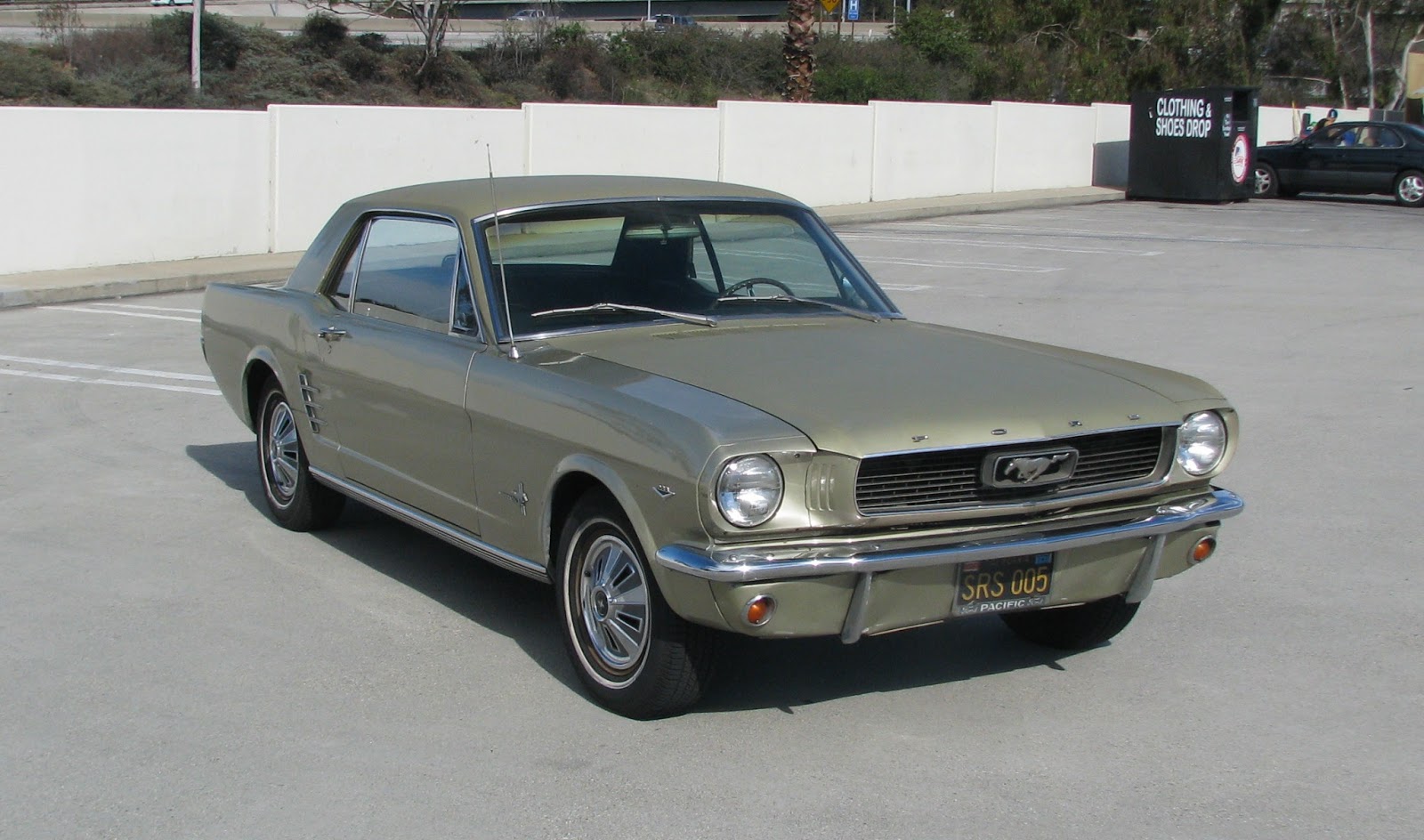 When asked why she picked the Mustang, Betsy admits that she was following her sister’s example who had also recently purchased her own version of the hot selling 2+2. When her sister traded in for the next car, Betsy just kept driving the old Pony, declaring that it was just too nice to sell.  Her only complaints were the lack of air conditioning when driving out of the oasis that exists near the beach cities in California, and the lack of power brakes causing her some minor annoyance from time to time. 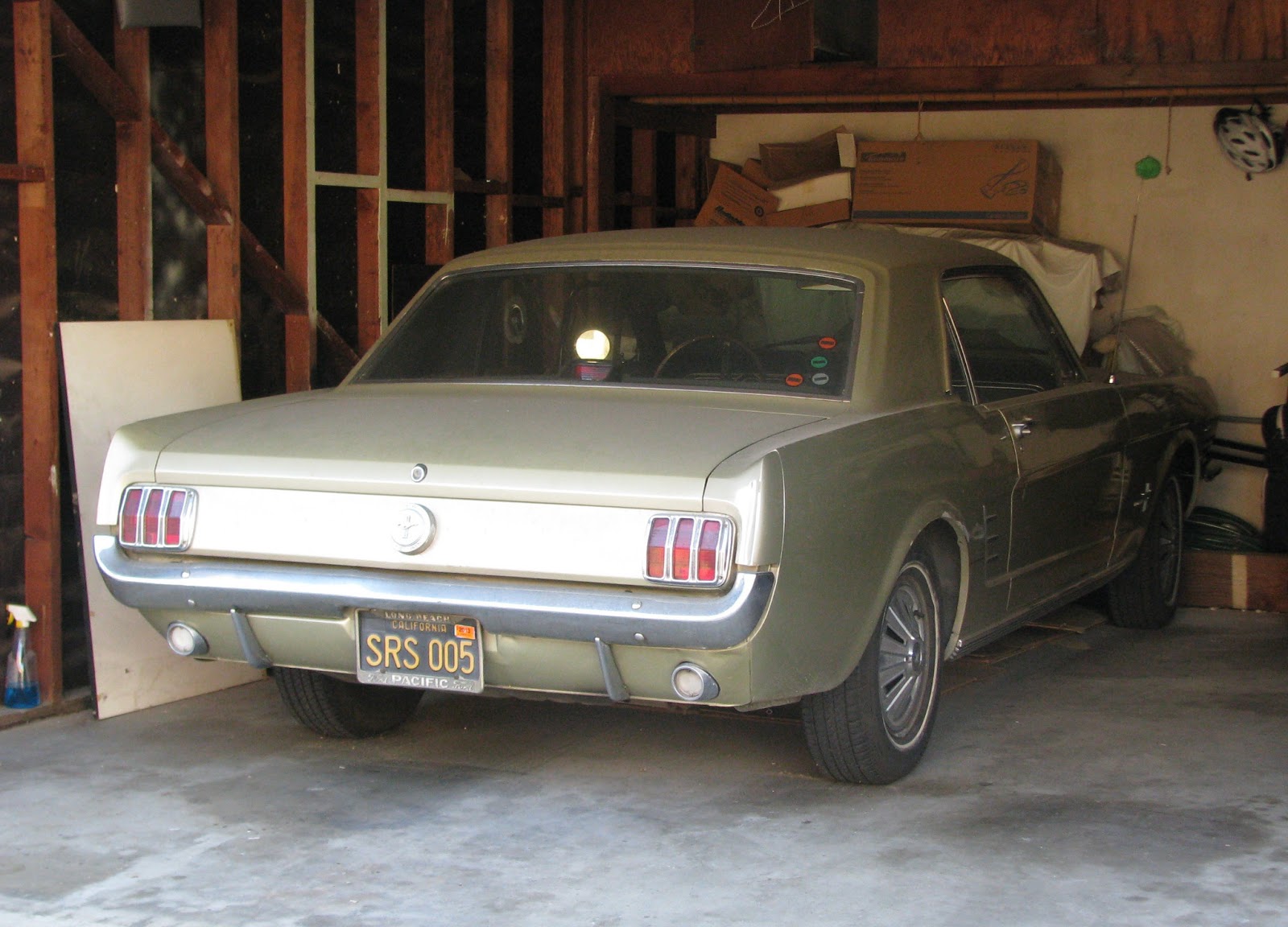 In recent years, she has been pestered almost every time she goes out in it.  People want to know what year it is, and keep asking if she wants to sell it.  Late in 2012, she decided it was time to hang up the keys and asked her nephew Alan to help the car find a new home. Alan’s favorite memory with his aunt is of Christmas, when Betsy would arrive with the back of the Mustang “absolutely filled with gaily-wrapped presents. Since she was an artist, they were so beautiful that it seemed a shame to unwrap them.”  Betsy never married, but Alan and his brother were her “substitute kids”.  Perhaps then, this Mustang was a bit of a substitute spouse to Betsy and like all husbands, is looking for a nice garage to live in.  It could be yours when the ebay auction goes live in the coming days.

The Daily Turismo sat down with Betsy’s nephew Alan, and stitched together the story of her car a few weeks after she turned 91 years old.  Betsy’s last name has been withheld from this article intentionally, out of respect for her privacy.

This article was republished on the main page of Jalopnik via kinja here.