This 1966 Ford Mustang Coupe which we covered in a feature article earlier in the week here on Daily Turismo is now being offered for sale through her nephew’s ebay auction, which is being offered with no reserve.  Bidding started at the cash price she paid in 1966 ($2,844.33) and already has 5 bids and is at $3,550 as of 9pm PST 3/7/13 with 9 days to go. 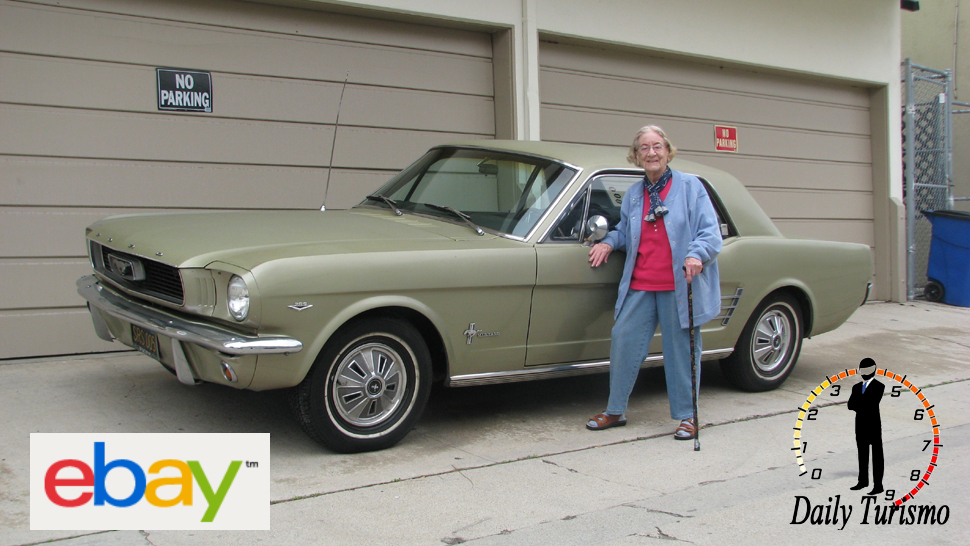 The beautiful young lady pictured above
is the current owner, who at 91 years young has decided its time to hang up her
keys.  She has asked her nephew to sell the only car she has owned since 1966.  He told DT that he would keep it in the family, except for the fact that there is no one in the family who can properly store and maintain it in the manner it deserves.

This one owner, Sauterne Gold C-Code Coupe is equipped with Automatic Transmission, Power Steering and AM Radio and has been owned in California for all of its 47 years!  It is our understanding that the documentation to be included with the sale to the successful bidder will include; the original window sticker, sales contract,
owner’s manual, embossed Ford Owner card as delivered new at Pacific Ford Autosales of Longbeach on February 23, 1966.  They have apparently located the maintenance records going back to 1971 and are still looking for any earlier ones which she may also have.

While the odometer reads 72,000 miles, maintenance records will show that the true and correct miles are 172,000.  While that might sound like a lot of miles, consider that averages out to less than 3,700 miles per year.

Even though its been garaged since new, this car is not flawless, but it is certainly one of the best maintained examples of a continuously driven, one owner first generation Mustang that you are likely to find anywhere in the country.  The only modification that Betsy made to the car is the addition of a high-center-stop-lamp which can be seen mounted on the rear package shelf in the picture below.

Almost everything on
this car is exactly as it was when it rolled off
the assembly line in San Jose 47 years ago.  The normal wear and tear
was carried out by Betsy. Should you be inclined to risk it, this car
could probably still be used as a daily driver exactly as is; but that
might not be its best and highest purpose.

There is a lot of debate in the restoration community about where the best value is for cars.  Some will argue that a car like this should be left as is because there are so few true survivors left anymore.  Others will argue that its entirely reasonable to enhance its current condition by carefully detailing and restoring all of the OEM parts with detailing and OEM style paint, while others insist that dry California cars like this deserve to be restored to showroom new condition.  I’m familiar with all of those debates and leave it entirely up to the highest bidder to decide which is the strongest argument.

See a better 1966 Coupe for sale on ebay? email us here: tips@dailyturismo.com