The ’57 Chevy gets all the attention when it comes to 50s domestics, but the ’57 Ford was no shabby pile of garbage either. Find this 1957 Ford Custom here on eBay bidding for $10,099 reserve-not-met with auction ending Sunday at 8:01PM Pacific. 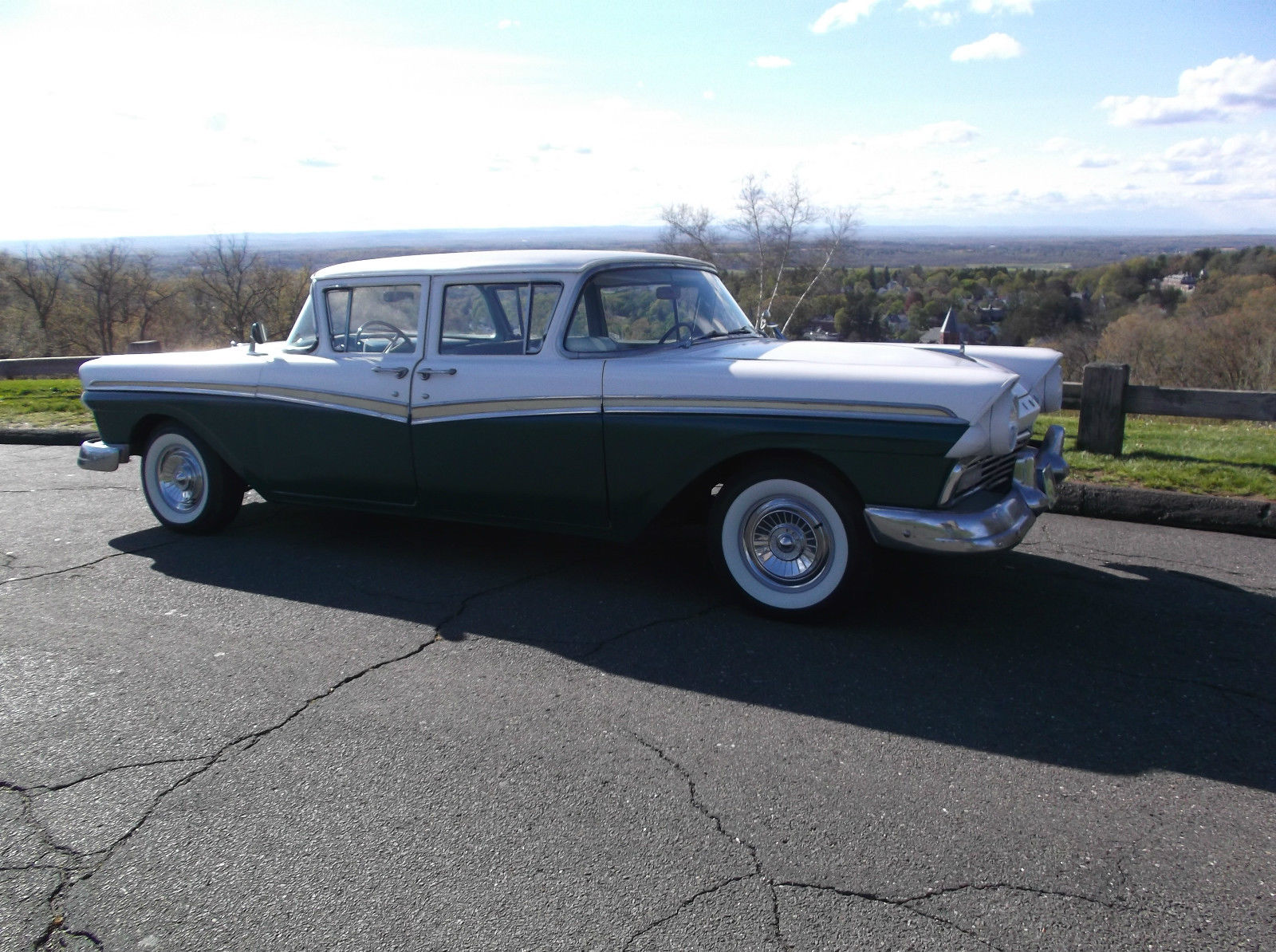 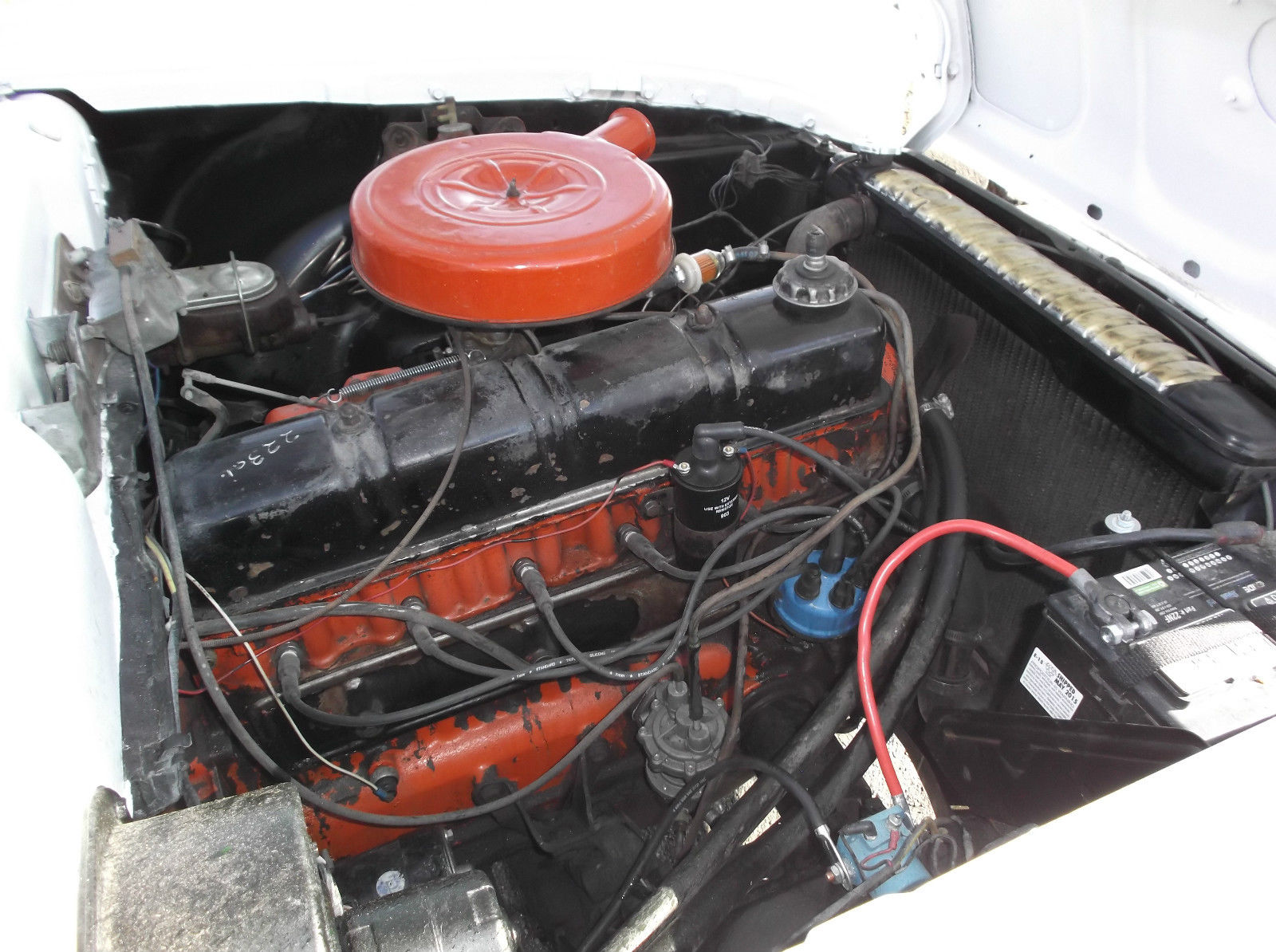 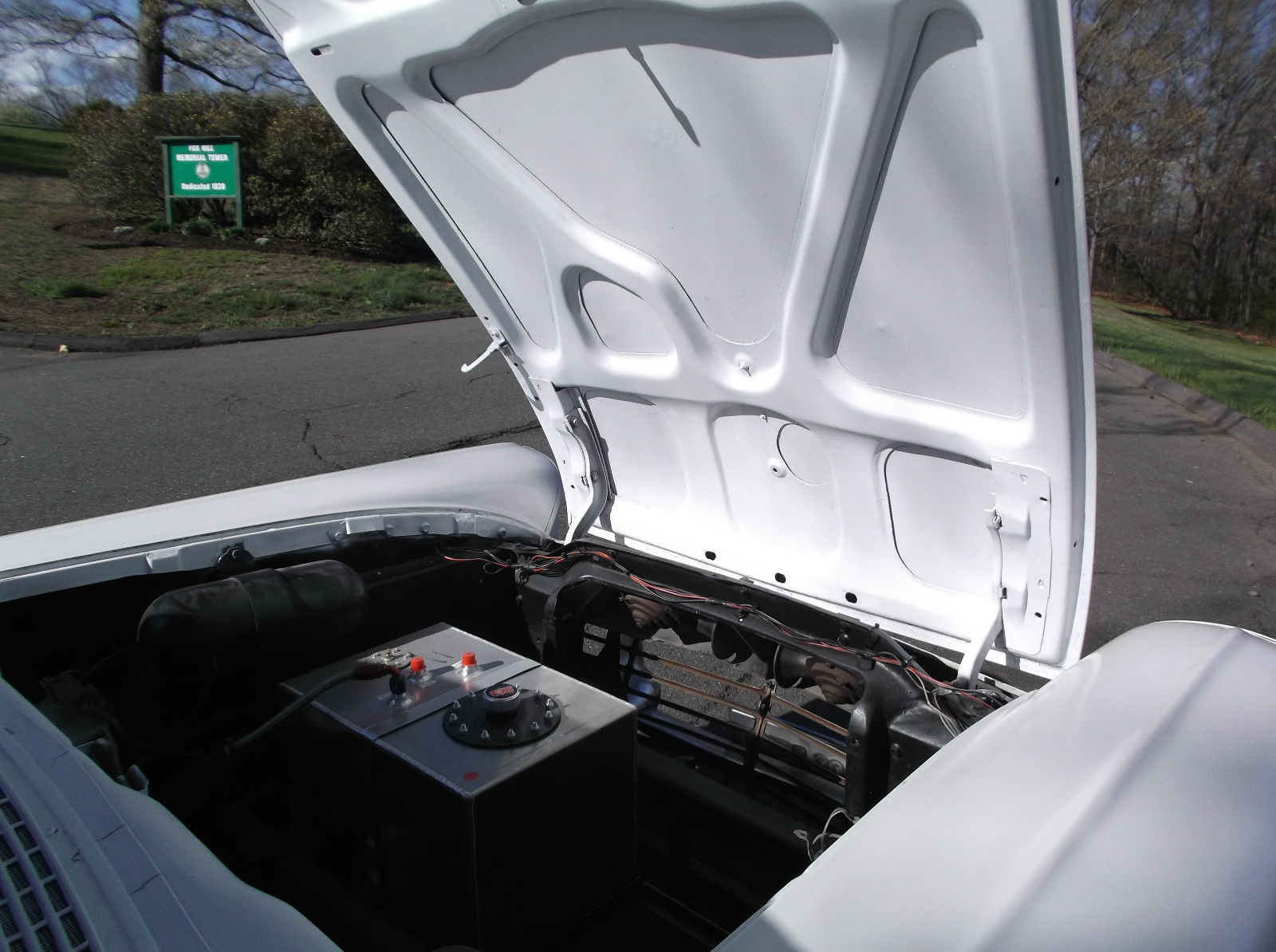 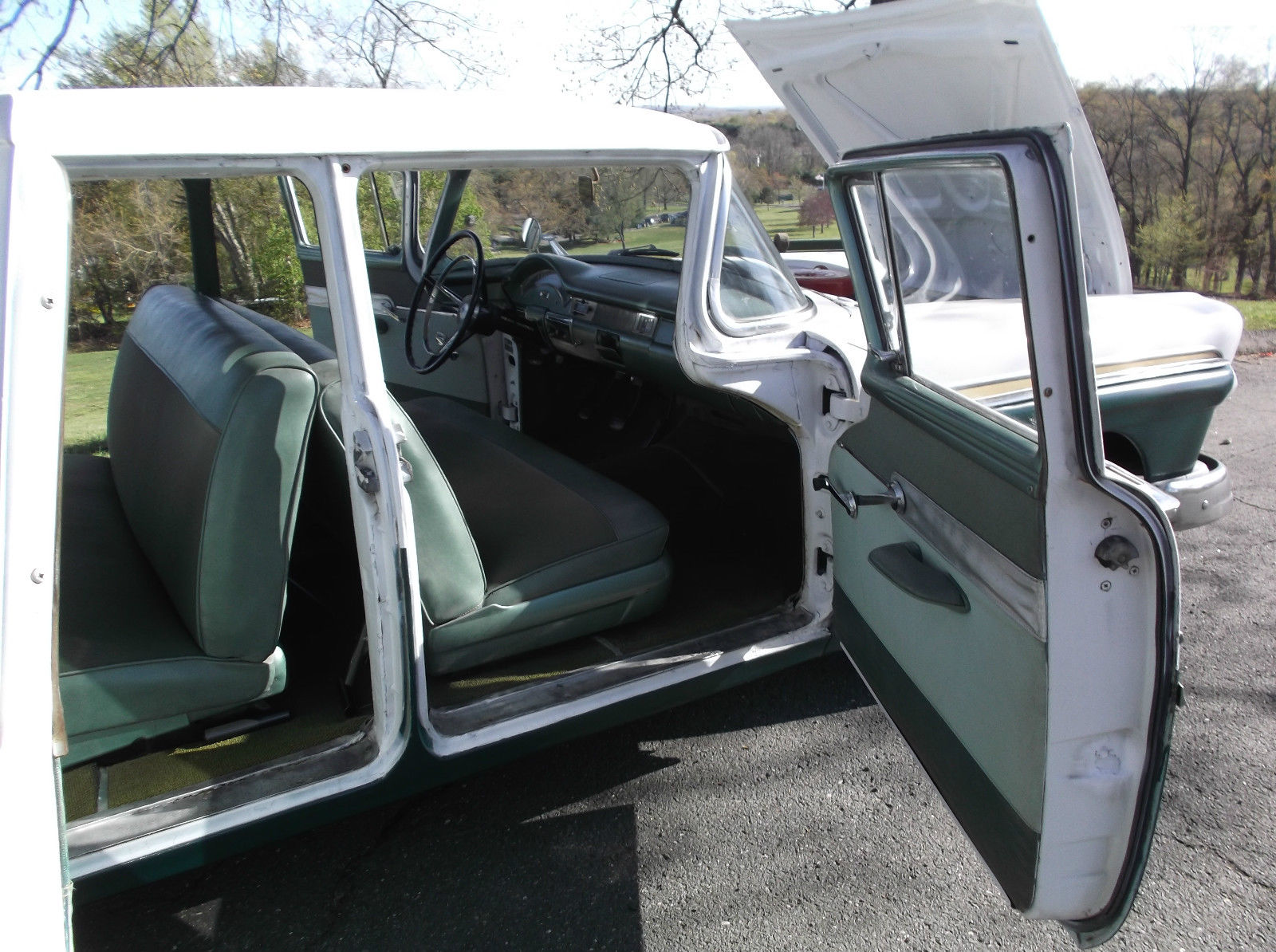 Where Do I Start ??? Ok Here I GO,I
bought this car 3 years ago when I saw a old ad for it and Owner said it
was still For Sale. So I drove up to Massachusetts with my Flatbed and
there it was sitting behind a Barn on a old concrete pad it had been
there sitting outside for 5 years waiting to get restored but he loss
interest ! So I brought it Home and it sat inside for months till I
could make a plan.Well after looking for a Year on line I Found IT ! a
old Picture of it from 1968 and it was in a parade and it was a color
picture so I knew what color I was going to paint it to bring it back to
it’s formal Glory then went to work on the drivetrain and it originally
Drove from Both Ends !!! It had cable’s and Linkage going back and
forth what a huge Job they did ! But it had been sitting So Long that it
would take a lot of work to Re-Do all that and I could tell you could
only do maybe 5 mph either way because the driveshaft was on a 45 degree
angle ! I Wanted to make it so I could drive it down the Road and
Highway to Go to Car Shows and Cruse Nights to BLOW Peoples Minds With
it ! So I end up doing a Frame On Restoration The Body Was rough so It
took about 3 months for the Body Shop to straighten it out and Paint it
to the original color,I Left the Door Jams the original paint which is
kinda rough but it is Original.Floor’s had a couple patches in them
already which was fine with me for a driver.Then started on the
Drivetrain .Cut out the rear end ( Which was really the front end of a
4X4 1960 International Scout so it could turn ! ) Then welded in a 1972
Ford Torino Rear End with all the leaf Springs and shocks,then had a New
Double Drivshaft made.Then did a Major Tune up on the 223 Six Cyl ( l
left all the Original paint on the motor) including Fuel Pump,Fuel
Lines,Starter,Battery,Carb,Plugs,Points,Condenser,Water
pump,hoses,tested Radiator was OK,Started it up Purred like a Kitten
!!!Now did All Brakes Including Master Cylinder all Brake Lines,Wheel
Cylinders,brake kits,shoes,all 100% NEW and Right !. Now went to the
interior which is all Original so just did a real good Cleaning on it
and had a New Head Liner Installed.Replaced a couple of the side windows
that had cracks in them.There You Have It ! Now low and behold one of
my friends said that my car is in” Hemming’s Classic Car in the LOST
& FOUND Under Which ways Reverse ? HCC # 121″ So low and behold sure
enough it is !!! A matter of Fact it was in 4 Different times ( Sorry I
try’ed to Load the Pictures of the Magazines would not load it !!!) but
Looking for it in # 38 # 120 #121 # 127 WOW !!! So I did put a call in
to HCC but did not get a Call back then after seeing the pictures I
traced the school down to get in Touch with Richard Malsam from Bismarch
Junior Collage Designed of North Dakota.And low and behold He worked on
the Car with the Students for 2 Years to make it and finished it in
April of 1968 to use it in Fairs and Parades and there was a Sign bolted
thru the roof that said ” Always Forward ,Bismarck Junior
Collage,Designed & built by our Auto Body Dept”from there it somehow
ended up in Springfield Ma at a Glass Shop as a Display for 20 plus
years then they Scraped it and the guy I got it from saw it at the Scrap
yard and bought it and that is the ‘Incredible Story’ !!! So I saved
it.I have NOT Gone to a Show Yet so you will be the First To Have All
the FUN in the World Showing it and going to Cruses with it.just siting
in my driveway it has caused accidents people stopping in the middle of
the Road ! So if you want to be the Center of Attention anywhere you go
this is the Car for You !!! It is Registered in Conn so I have a
Registration that I can transfer with a Bill of Sale Conn Dose Not Give
Titles for cars over 25 years old ! Make sure you can Register it in
your state.Car is being Sold As Is.The Condition of the car is a
“Driver” It is Not Perfect by any means ! It Is What It Is ! It is 60
Years old and most of it is Original ! Paint is real Nice it is single
stage Pictures should tell 99% of the Condition ! Speedo dose not work
so TMU on milage,wipers do not work,heater dose not work.Yes It Is a
Nice Day Car Only ! will cruse @ 75 mph all day long.Good Luck
Bidding…I am 20 min outside of Hartford CT if you want to come see
it.Please only bid if You are a Serious Bidder.I do Not TEXT,email Only
if you are serious….Again This is the ONLY One Like It that is Legal
on the Road in the WORLD ! That is what you call Rare or One of  a Kind
or 1 of 1 !!! Just trying to Help you Understand This is Your Only
Chance Ever to Own It ! Thanks Sean…….

On May-08-16 at 20:57:22 PDT, seller added the following information:P.S:
Sorry I forgot to add that the Back End of the car I made those rear
Headlights into One of a Kind inside I cut the back of the Bulb’s ( It
Took 6 headlight Bulb’s they kept breaking when I was drilling them out
with a Diamond Drill Bit that cost me $ 95.00 but it Work’ed !!! ) and
add”ed 2 LED Lights to make a combo STOP Lights and Park light that are
Red when Lit to make it Street Legal !!! I was going to hook up the Head
Light bulb’s with the brake lights and park all in One, but I Know I
was looking for Trouble if I did that just think how freak’ed Out people
would be if they came up behind it on the highway and think it is
coming Straight at them with the Headlights ON !!!