The Chevy 150 was the economy and fleet version of the Chevrolet car from 1953-1957.  It shares many components with the consumer oriented 210 and Bel Air models but was tailored to meet the needs of fleet use.  Today’s featured 1956 Chevy 150 is an ex-US Army Staff Car and is for sale in Moss Landing, CA for the buy-it-now price of $6,000 via ebay. 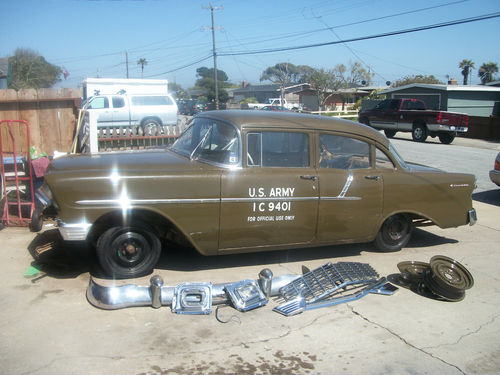 This olive green beauty is sold as a project in many pieces, and is claimed to have been running when parked in 1965…yikes.  48 years is a long time to leave a car without driving it and it will need a thorough rebuild of the engine/trans/brakes/suspension– basically any part that moves or seals will need its moving parts and seals replaced. 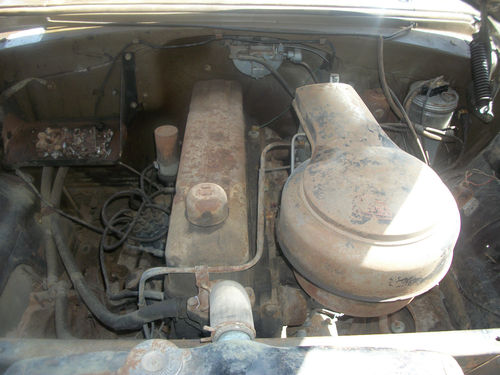 This ’56 is powered by a 235 cubic inch (3.9 liter) inline 6 cylinder, the very same engine that was used in the first generation (C1) Corvette.  The 235 has a reputation as a reliable and excellent big inline 6 and puts out approx 125 horsepower in this fleet car.  Chevy built millions of these engines back in the day so parts availability isn’t a problem and they will run forever if properly maintained. 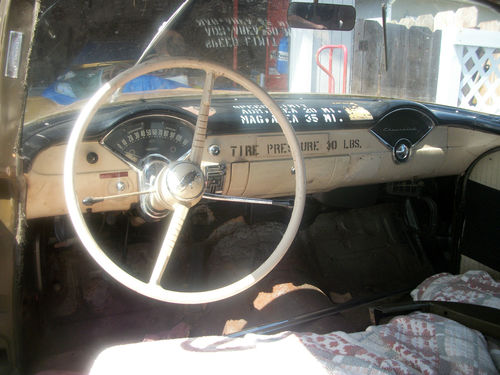 This Chevy still has its US Army spray tagged dash, complete with information on recommended tire pressure, speed limit and two other cryptic recommendations.  This ’56 is equipped with a three on the tree standard transmission and won’t make for a particularly sporty drive, but it should be faster than most VW beetles and city buses. 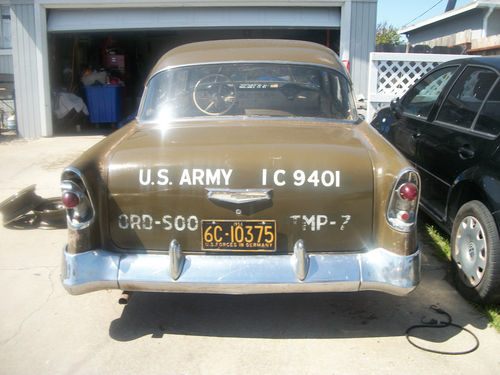 We can picture a helmeted private chauffeuring some generals around the base in comfort and class.  This is a strange car that would likely be desirable in parades and certainly a novelty at a car shows, but we aren’t sure if you’d want to commute every day in it.  We wouldn’t want to restore the exterior or repaint this beauty, and we think it deserves a thorough mechanical restoration.

On the other hand, a thorough sleeper would be possible here – a modern LS V8 with a T56 six-speed manual and a “pro touring” style suspension would sure make this a fun staff car. Widened olive drab steelie wheels with sticky tires would complete the package – we just hope this thing never gets blinged-out with dubs or even chrome 5-spokes. Either way, leave the exterior and paint alone; everyone already knows what a red & white two-tone Bel Air looks like!