Everybody loves a sleeper – that dowdy-looking car that attracts no attention until it lays down two perfect patches or blows the doors off of your buddy’s Vette at a stoplight. A station wagon is a good choice as a build platform, because it makes the end product that much more entertaining, but what if the sleeper wagon is not sleepy enough? And and say the plain-jane 4 door sedan is just too sporty? What do you build then? You take a base model, short wheelbase early Chrysler minivan – a Plymouth Voyager to be exact – and shove the heart of a Dodge SRT-4 in place of the wheezy lump it was born with. Find this 1989 Plymouth Voyager w/ SRT-4 swap for sale in Hamilton, OH for $5000 via craigslist. Tip from Fueltruck. 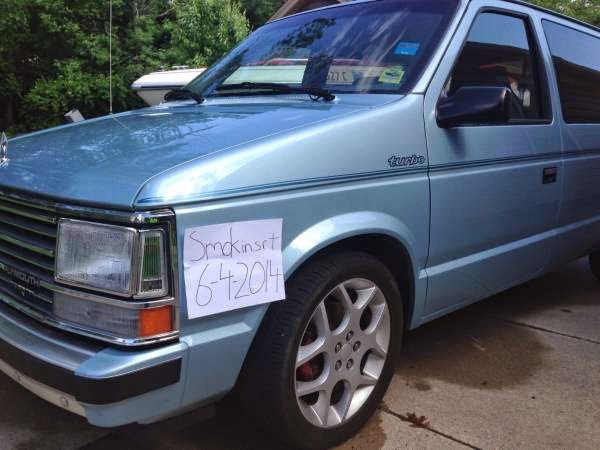 This same basic “WTF?” turbo 4-cyl minivan idea has been done before, but this particular van takes the cake of the ones I’ve seen for its cleanliness and the builder’s choice of powertrain. The engine that looks so small in that big roomy bay is from the Dodge SRT-4 (don’t call it a Neon – they don’t appreciate it). The A853 is a 2.4 liter inline 4 and cousin of the PT Cruiser’s engine, so perhaps it’s fitting that one got installed in the PT’s grandpappy. 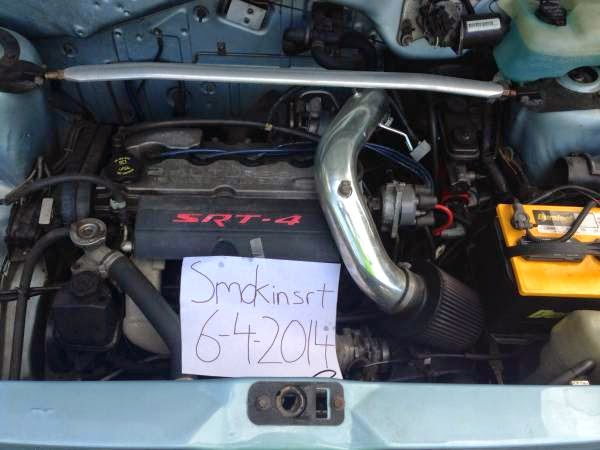 Apparently it’s not hard to get these to produce somewhere near 300 hp at the flywheel, but the engine was rated at only 230 bhp max in stock form. The turbine housing of the tiny MHI TD04 turbocharger has an integrated exhaust manifold, meaning that the two are cast together as one iron chunk with no flanges or joints – common today, but odd for 2003. The turbine is miniscule for good transient response and midrange torque but will present a significant restriction as higher peak power is targeted. 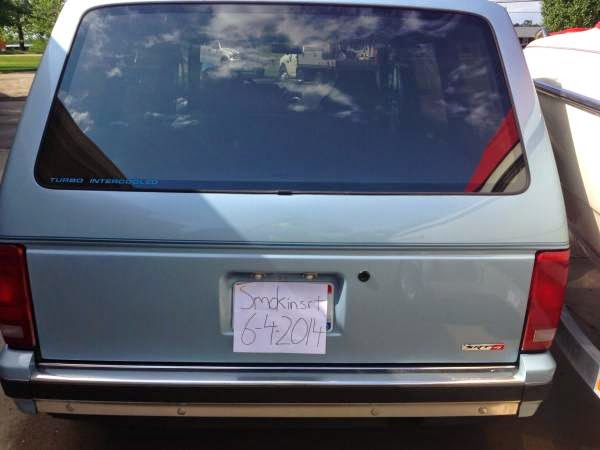 This is the view that most of the minivan competition will see when the Voyager dusts them off the line. Not bad really, and the seller says that the van was recently repainted and given some custom Turbo graphics and pinstripes, as well as the SRT-4 alloy wheels. Personally I’m a fan of the low-key Turbo Intercooled sticker in “Star Trek: TNG” font on the rear window. But I’m a big geek; don’t mind me. 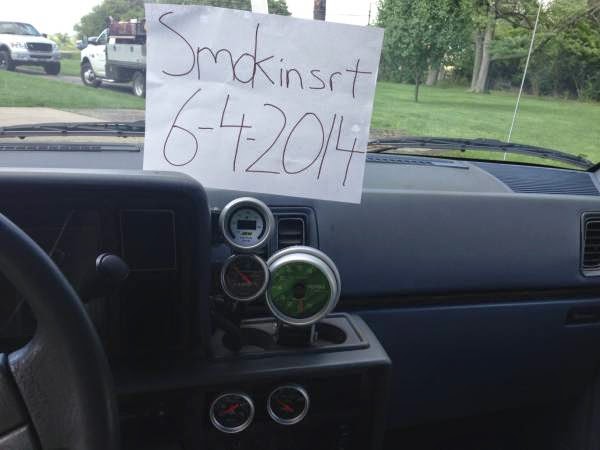 The seller says he didn’t build the van but bought it from the builder, one Rob Pachner, and says it was capable of a 13.3 second ET in the 1/4 mile with a 98 mph trap speed, at 22 psi of boost pressure from the tiny hairdryer. I was able to find documentation of that time here at Turbo-MoparTimes.com, in the “Thirteens” section. A bit of googling brought up a startup video here on StreetFire.net, but not much is gleaned from that other than the mean sounding exhaust note. An almost unwatchable youtube video is more telling, and shows who is presumably the builder blasting around the mean backroads of rural Ohio.Unfortunately for the enthusiast driver (but probably better for drag racing) this van is running a 3-speed slushbox automatic. But I can’t see how this wouldn’t be a blast to drive for a while, at least until the novelty factor wore off.