Most of the Volvos we have featured here on DT have either been clean vintage models, or highly modified newer cars that are interesting because of engine swaps and other general mongolism. This one however is interesting for its originality. Even though it’s beige…no, scratch that: because it is beige we like this incredibly well-kept, sharp looking and tastefully modified sedan. As a bonus, it’s equipped with an M47 5-speed manual transmission which is increasingly hard to find in a late-model 240. This clean, simple, and timeless three-owner 1988 Volvo 240DL is available for $3300 or best offer in Everett, Washington (via turbobricks.com forums – if you’re not a member, you should be – just join!).

UPDATE 09/30/12: This car is now listed here on ebay with a $3500 Buy It Now price but bidding near $2k with reserve not met. The ebay market could possibly bear the increased asking price on this one, since clean late-model 240s seem to command a premium on the auction site. 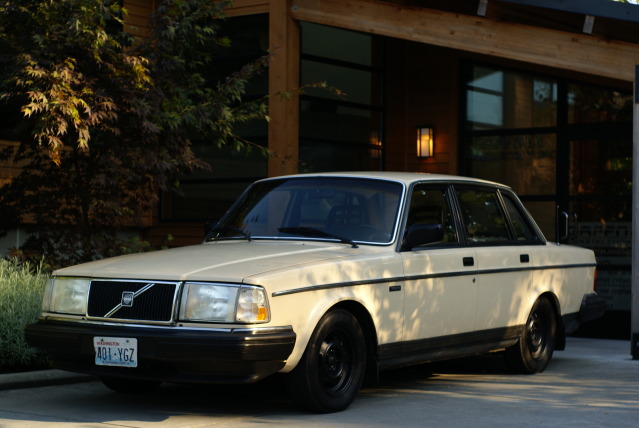 The 4-door sedans are the most pedestrian of the three different 240 body styles offered by Volvo over the years and are the most plentiful, with the wagon being a close second. However, the sedans do have certain advantages over their siblings: they are lighter in weight than the wagons, but stiffer than the 2-door 242 models and feature nice short doors in contrast to the 242’s extended monsters than require megawide parking spaces to open completely without bashing adjacent cars. The 4-doors are also easier for back seat passenger access and a good choice for a 240 fan who has car-seated offspring but who doesn’t need or want a wagon. 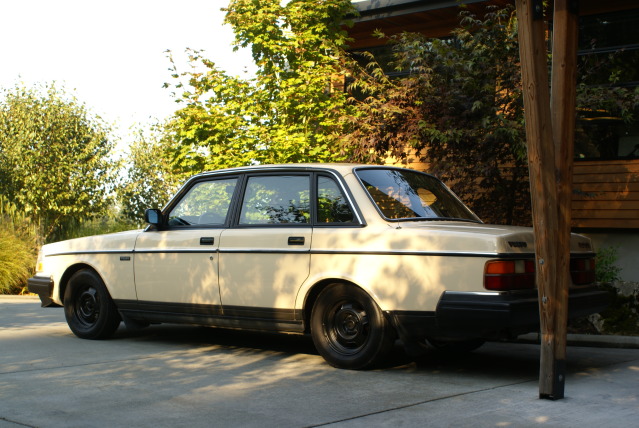 We really dig the look of the unadorned black steel wheels on this brick, combined with the original beige paint and slightly lowered stance. Modifications include cut stock springs, a shortened panhard (aka track) rod to re-center the rear axle after lowering, and doubled-up stock antiroll bars in front. All of these are very budget friendly ways to modify a 240 for the lowered look and less nautical body roll than stock, but could be more thoroughly re-thought if desired by the new owner. Several Volvo-centric suppliers offer quality suspension upgrade parts like stiffer springs, coilover conversions, modified control arms, adjustable rear axle links, thicker antiroll bars, camber plates…the list goes on. iPd, Kaplhenke Racing, YoshiFab, and RSI all have a wide selection of parts to choose from. 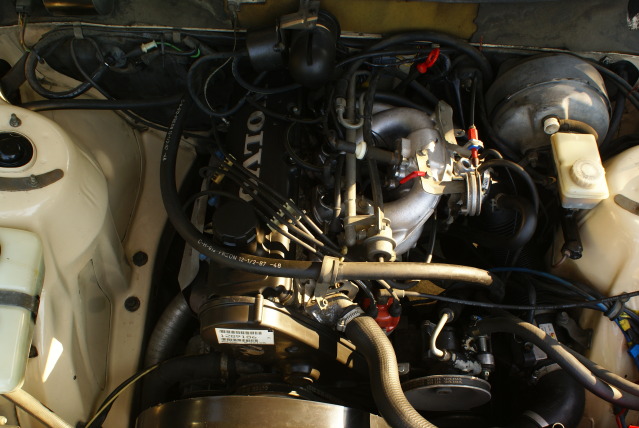 Underhood we can see an especially tidy looking B230F naturally aspriated, overhead cam, 8-valve 2.3L four. Unfortunately the factory 240 Turbo cars were last produced in 1985, and by ’88 there was only this one gasoline engine option offered in the States. But it does benefit from much more modern and simple EFI and low-friction internal design than the earlier cars, so for a mileage conscious enthusiast it would be a good choice especially paired with the 5-speed manual. If economy isn’t the highest priority and the entertainment factor needs to be turned up a notch, adding a turbo system from a 740 or 940 is fairly straightforward. Fuel & ignition control units, the turbo itself, exhaust manifold, airbox, intercooler and plumbing can all be adapted to work on the later 240s. In a non-smog-Nazi state, the next step could be fitting a higher flowing 16-valve cylinder head from a B23FT engine as found in the 740 GLE cars. These can be adapted to the 8-valve blocks with some modifications to the pistons, distributor and timing belt routing. 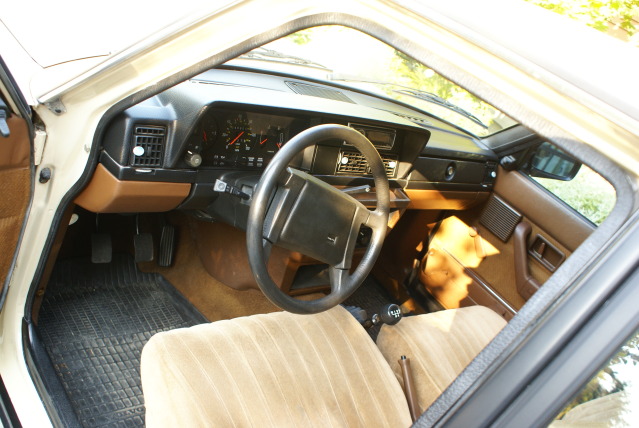 The interior of this ’88 features more of that clean Scandinavian squareness that the 240 is best known for. Predominant coloring is a medium “poo” brown, with a two-tone black/brown dash that adds some visual interest. Overall condition looks fantastic but the seats are wearing tan aftermarket covers. We are not sure if this means the upholstery underneath is worn out, in perfect shape (just well protected), or whether one too many bean burritos were dropped on the cloth. Either way, if the seats need replacement or reupholstering, self-service junkyards seem to be full of 240s these days, many of which still have decent seats. The 240pocalypse has to come to an end sometime soon though, so we’d recommend grabbing any needed parts before the majority of these cars end up crushed and recycled into refried bean cans. 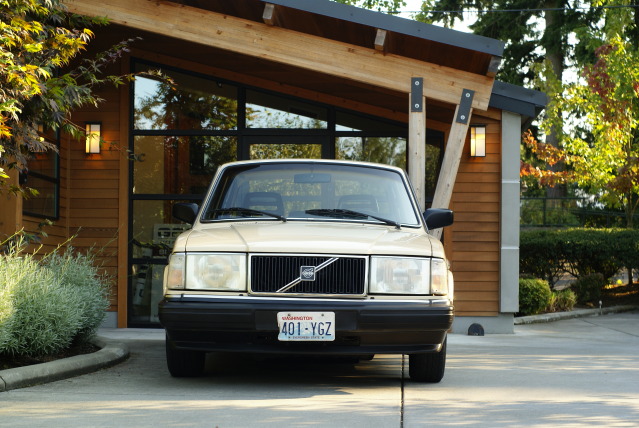 Apparently this car was originally a tow’d…no, not a green amphibian that was transformed by a princess’ kiss, but a vehicle that was towed behind a mammoth RV for use as a runabout after setting up kamp at the next kitschy KOA. With that being the case, actual mileage on the drivetrain is likely far less than the ~250k shown on the odo – which is still not considered to be very high for a well maintained 240. So with elderly original owners and two enthusiasts since then, the car has been in good hands. Working AC, the 5-speed manual, original window sticker and that classic brick appeal all add to the pluses for this one! We can’t think of a more solid daily driver that would give the same levels of blocky style and RWD driver satisfaction as this beige brick for the money.

Have a minty fresh RWD Volvo for sale, or find one online? Email us here: tips@dailyturismo.com