What’s a Hyundai Elantra doing on this website? Good question.
Let’s answer it with another question: What’s a sleeper? Is it a Dodge
Dart wagon with a 426 Hemi in it? Or a SBC-powered Volvo 240? Consider
your internal definition permanently readjusted by this unassuming gray
FWD econobox… with about 321 turbocharged reasons to keep reading.
Find this 4G63-swapped 1994 Hyundai Elantra for $4,200 in Seattle, WA.  Words by DT contributor slowcarSLOW-MPGlol. 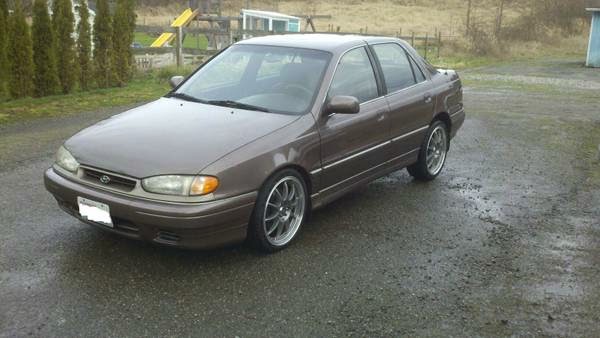 The 4G63 is a turbocharged 2.0L four-cylinder used
in a slew of cars in the last few decades, from the Mitsubishi Eclipse
and its DSM variants to Evos I through IX. That bodes well for tuners
seeking big power and a bigger aftermarket for otherwise anonymous
commuter heaps. We’ve recently featured a 4G63-swapped Mitsubishi Mirage,
but this one looks like it underwent a more thorough build (including
dyno time) to handle its whopping 321 horsepower. Everything is there
minus an AWD conversion, which should be an easy conversion with OEM
Mitsubishi parts. It’s the logical next step in getting all that power
to the tarmac. Evo and Eclipse commonality offers more parts
than the Elantra aftermarket (if such a thing exists). Even the English
Racing Hotpipe, which sounds like something you would smoke Earl
Grey-flavored tobacco out of, is in fact intercooler piping that’s been
proven by 9-second Eclipses. The exterior is stock minus the mismatching
front trim piece and universal-lug wheels that betray its sleeper
status. Serious inquirers should ask about the suspension first, as the
raked stance could be attributed to stock Elantra suspension compressing
under the load of the heavier engine. 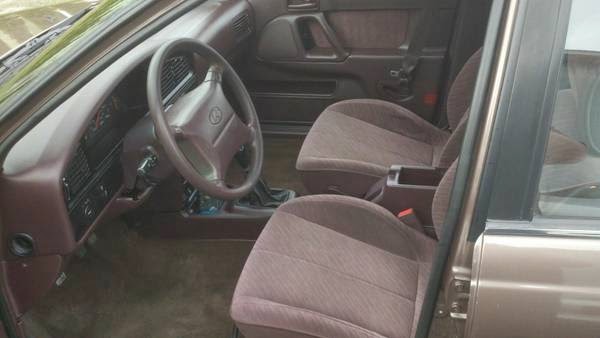 As a GLS version, this Hyundai’s power equipment,
cruise control, and unique oxblood color make the cabin bearable. It’s
yet another swap without air conditioning or power steering, although
the seller says that fix is just a pump away. This could be a fun daily
driver for the socially reserved hoon. Or you could shock F-body owners
at the track as its linear torque curve takes you to the limits of its
140-mph speedometer. 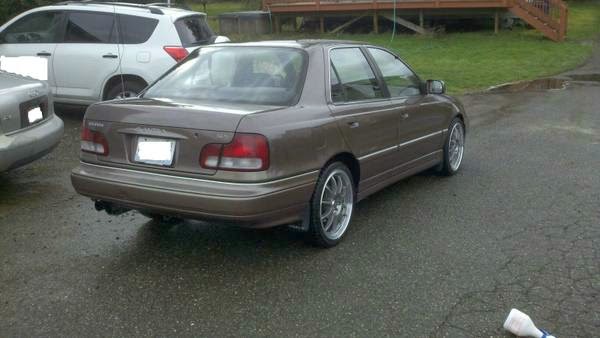