The Joker is Batman’s arch rival in DC Comics long running comic strip and has been played on screen by various folks including Cesar Romero, Jack Nicholson & Heath Ledger.  We couldn’t have picked a more appropriate Joker mobile for Jack Nicholson than the C4 Corvette as it matches his aged, overweight, balding and grizzly character from the 1989 Batman movie.  This 1987 Chevy Corvette C4 Horrorod has an awesome Joker themed paint job and is for sale in Norfolk, VA for $6995 via craigslist. 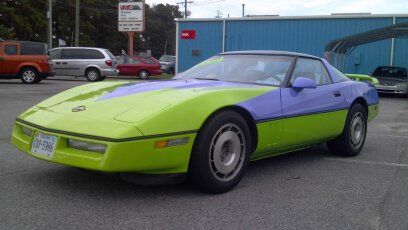 The C4 Corvette was the 4th generation of Chevy’s plastic bodied Corvette platform and this one has been covered in a Green/Purple paint scheme very reminiscent of the Joker.  This C4 may not have fallen into a vat of hydrochloric acid, but it certainly looks like the Crown Prince of Chaos! 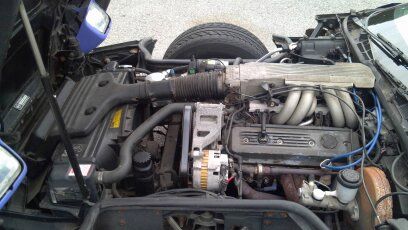 Powered by the venerable Chevy small block, this is an L98 – 5.7 liters of push-rod, port injected goodness pushing out 240 horsepower and 345 ft-lbs of torque.  This is mated to a slushbox automatic and will push the Vette along at an adequate pace, not lightning fast today, but enough to overpower and tinkertoy C4 chassis. 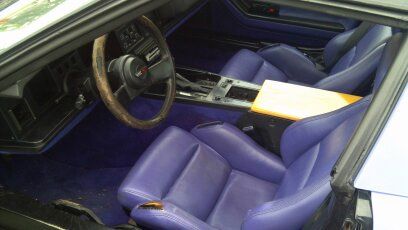 The inside of this Jokermobile looks like an acid trip – complete with purple seats, yellow center arm rest and a worn out steering wheel.  It could use a good CSI style deep cleaning. 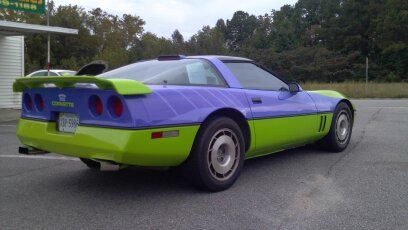 The C4 Corvette was certainly a fast car back in the day – and today is strongly desired by folks who watch a lot of professional wrestling on tv.  But we think this Joker themed C4 is just the ticket to have an awesome Daily Turismoween.