This is the part of the article where we normally give some background…the car was designed by so-n-so as a replacement for such-n-such…but not today.  Today, the best I can give you is to tell you that drugs are bad.  Mmmkay.  Find this 1979 Laser 917 offered for $7,500 in Tucson, AZ via craigslist.  Tip from Tamas.

What is it?  The seller’s listing doesn’t shed much light on what exactly we are looking at — in fact he just asks those same questions:

The “Blue Car” will attract attention like no other. People will shout, honk, lean out of their car window with their cell phones to take pictures. You will be asked questions like “Is it a hovercraft?” or “How fast does it go?” One guy said “It looks like it’s doing 60 even when it’s parked.” It’s one of a kind. There’s certainly nothing else like it in Tucson, Phoenix, maybe not even in all of Arizona. 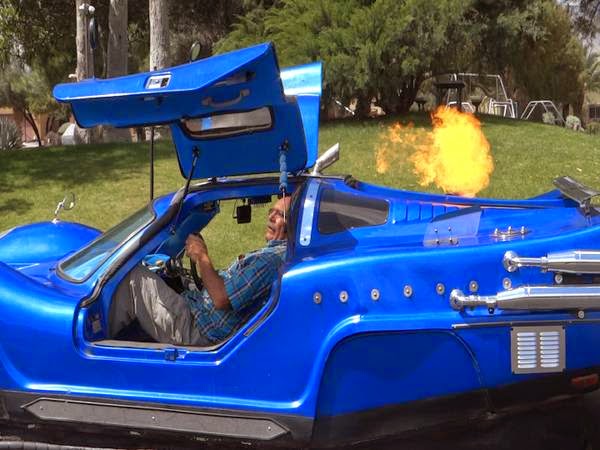 From the video description:

Air conditioning – Since we live in Arizona, we decided that some sort
of AC was necessary. Noticing that there was lots of room under the rear
fenders, we mounted a 120V, 2500W, electric generator, connected to the
car’s gas tank. That’s connected to a 1 ton standard house AC unit,
mounted behind the seats. There’s also a standard 120V electric wall
receptacle, inside to cab for hooking up tools, etc.

Flame
thrower – We developed a propane-based flame thrower that sticks up from
the roof at about 45 degrees. While less spectacular than having flames
come out the exhaust pipes, it’s also much less dangerous. We use a
self-igniting propane torch tip as a pilot light, then with a nitrous
solenoid as a control, dump a raw propane stream into the flame.

Taser
hood ornament – We spotted a guy selling “stun guns” at a Tucson swap
meet. Impressed by the 2″ spark and the ripping sound it made, we bought
one and made a hood ornament out of it. Afterwards, using an
inexpensive Radio Shack radio controlled car, we made a remote
controller that lets us fire up the taser from as far as 50 feet from
the car.

Hovercraft
look – In addition to the skirts, we hung a fringe of outdoor carpeting
totally around the car making it look a bit like a hovercraft. We
protect the carpet where it might scrape the road with foam, tubular
pipe insulation which can be easily replaced when it becomes too frayed.

Seem something that is more extreme than this?  Probably not…but just in case — send it here: tips@dailyturismo.com